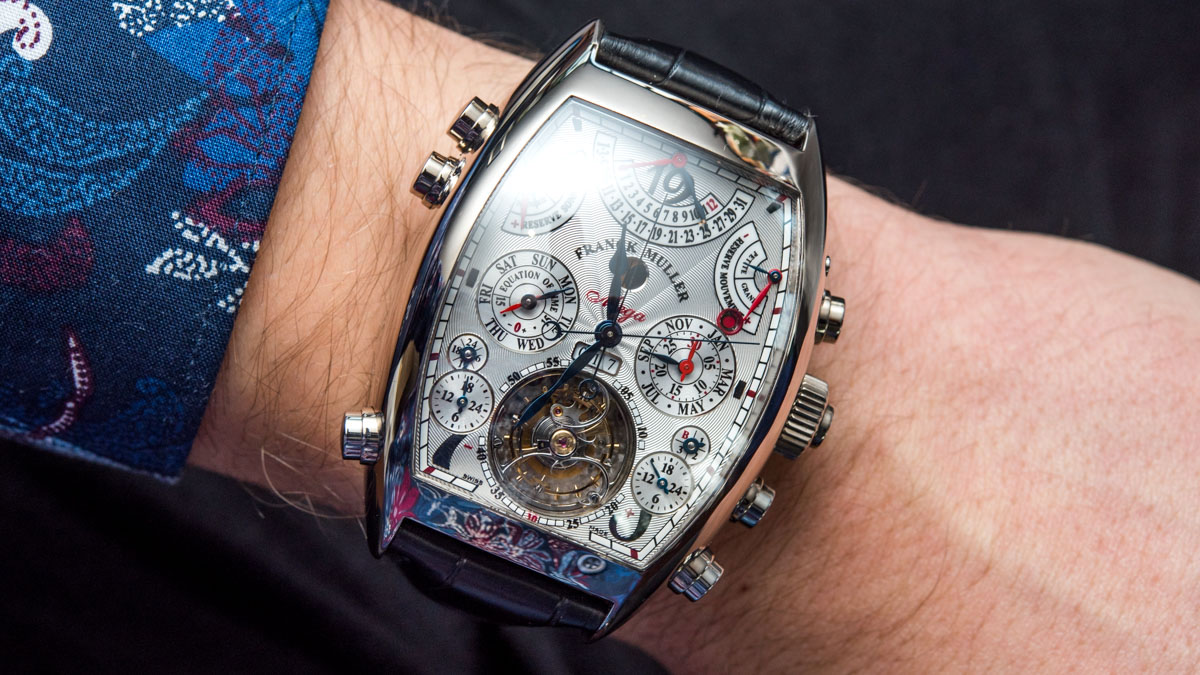 One Of The Most Complicated Wristwatches Ever: Franck Muller Aeternitas Mega 4 Hands-On 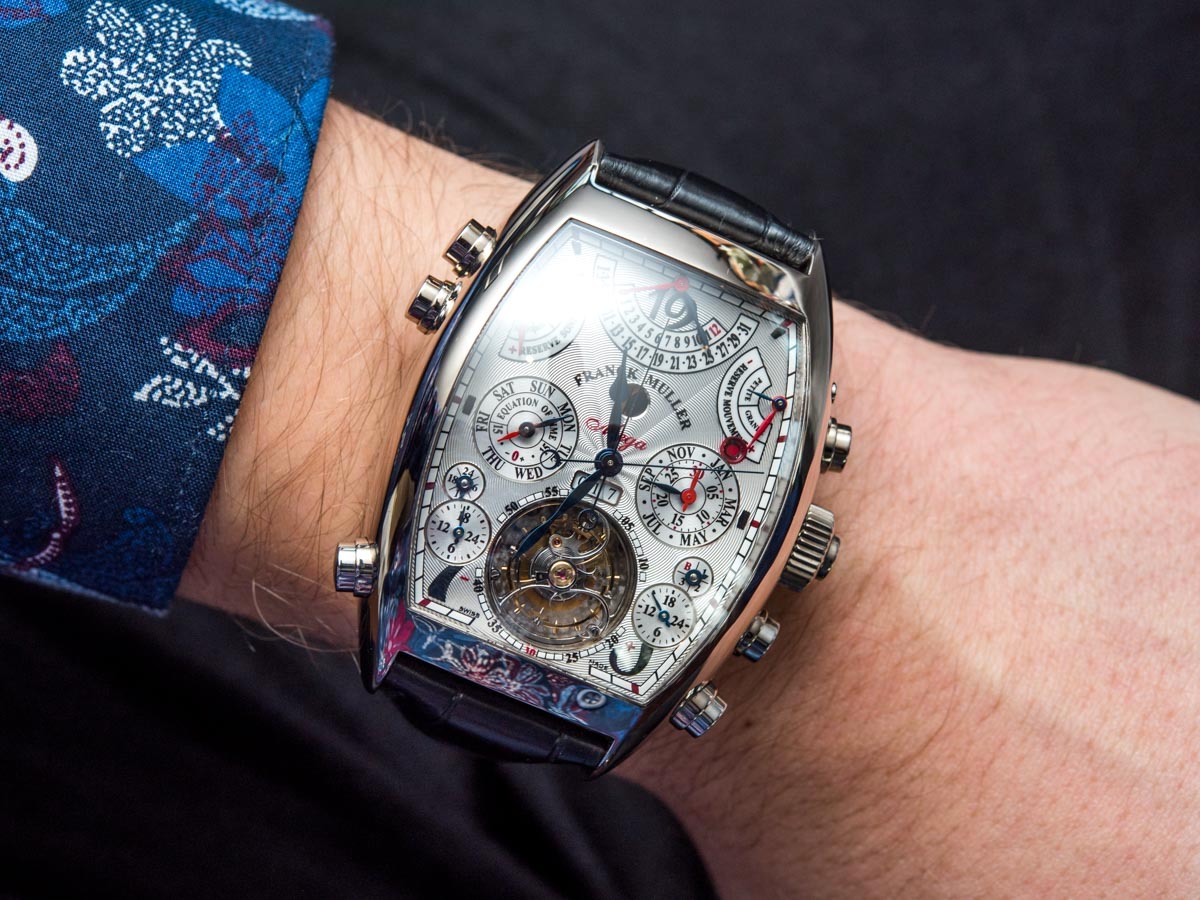 The Franck Muller Aeternitas Mega 4 I have long considered not a grail, but rather a myth, really. Not that I have ever looked for it specifically, but I have never stumbled upon it anywhere online, other than when featured with the company’s official photos. Meanwhile, as years passed, I have in fact worn and/or seen in the wild most all of the craziest watches the horological world has managed to bring to this world. The Aeternitas Mega 4 was, however, nowhere to be seen – at least in those parts of the world that I frequented. The Miraculous Encounter happened unexpectedly on the last day of our SIHH 2018 trip this January, when this watch just… appeared. I was baffled, but not baffled enough to miss calling first dibs before proceeding to take hands-on pictures of this beast myself. Here’s how the Aeternitas Mega 4 looked and felt like in the real world. 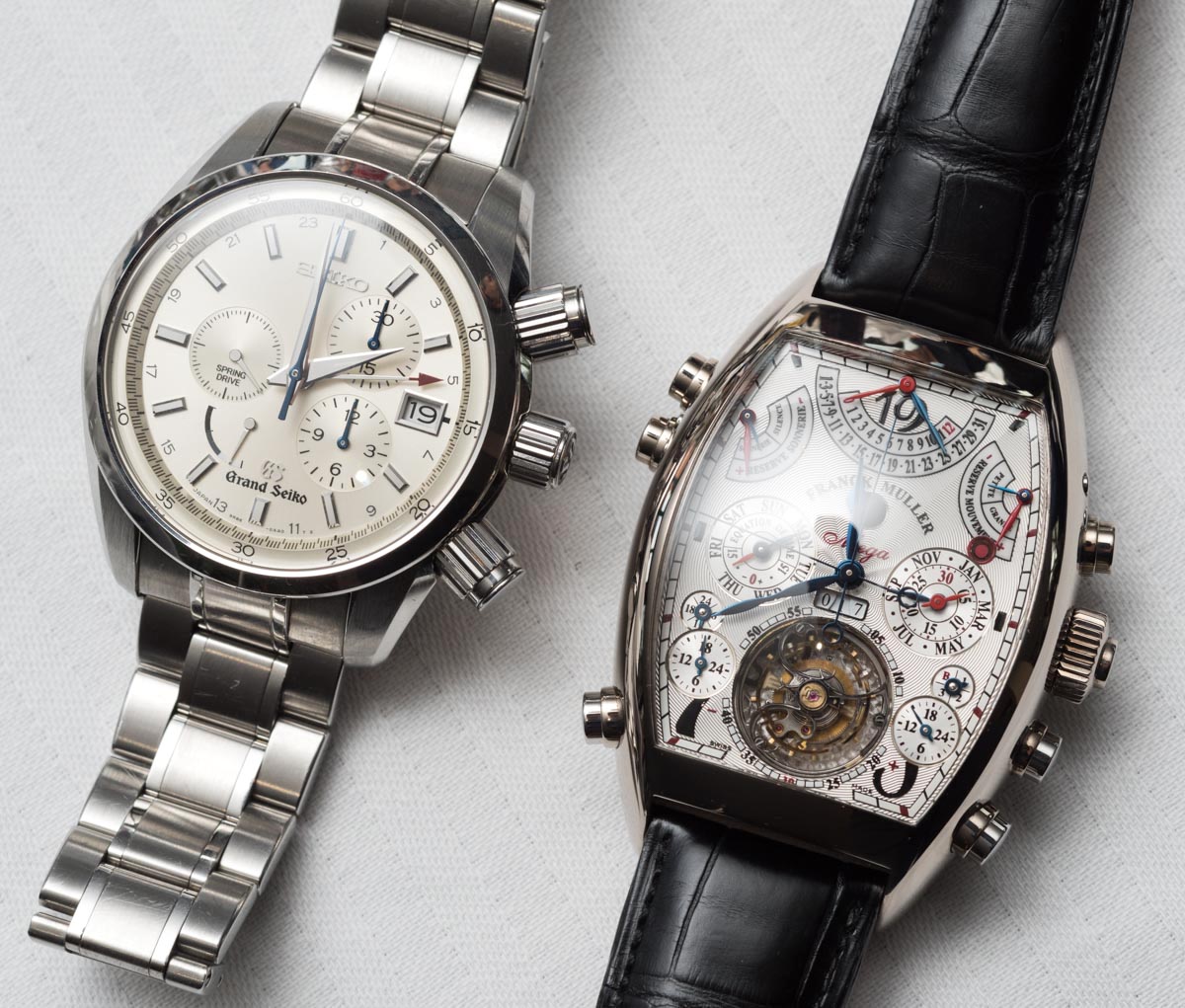 The Franck Muller Aeternitas Mega 4 next to a Grand Seiko SBGC001… with about 1,050 fewer parts in it. 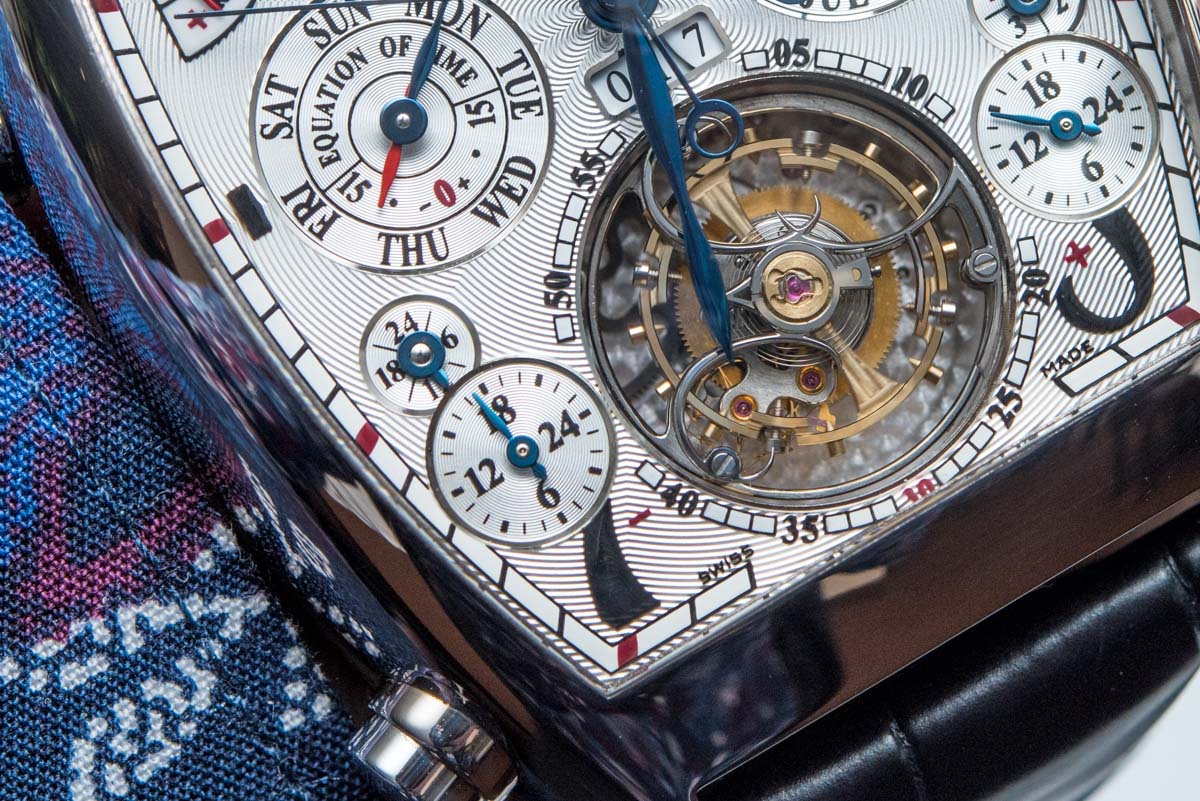 First, the basics of the complexities. 36 complications, 23 indications via 18 hands and 5 discs, 1,483 components, 99 jewels, 91 wheels (!), 7 pushers and 4 correctors, five years of planning and, reportedly, a full year to assemble… Oh, and a price tag of around $2.7 million. These are the figures the Franck Muller Aeternitas Mega 4 shocked the world with at the end of 2009 – even if watches with well over 1,000 components had existed before it. 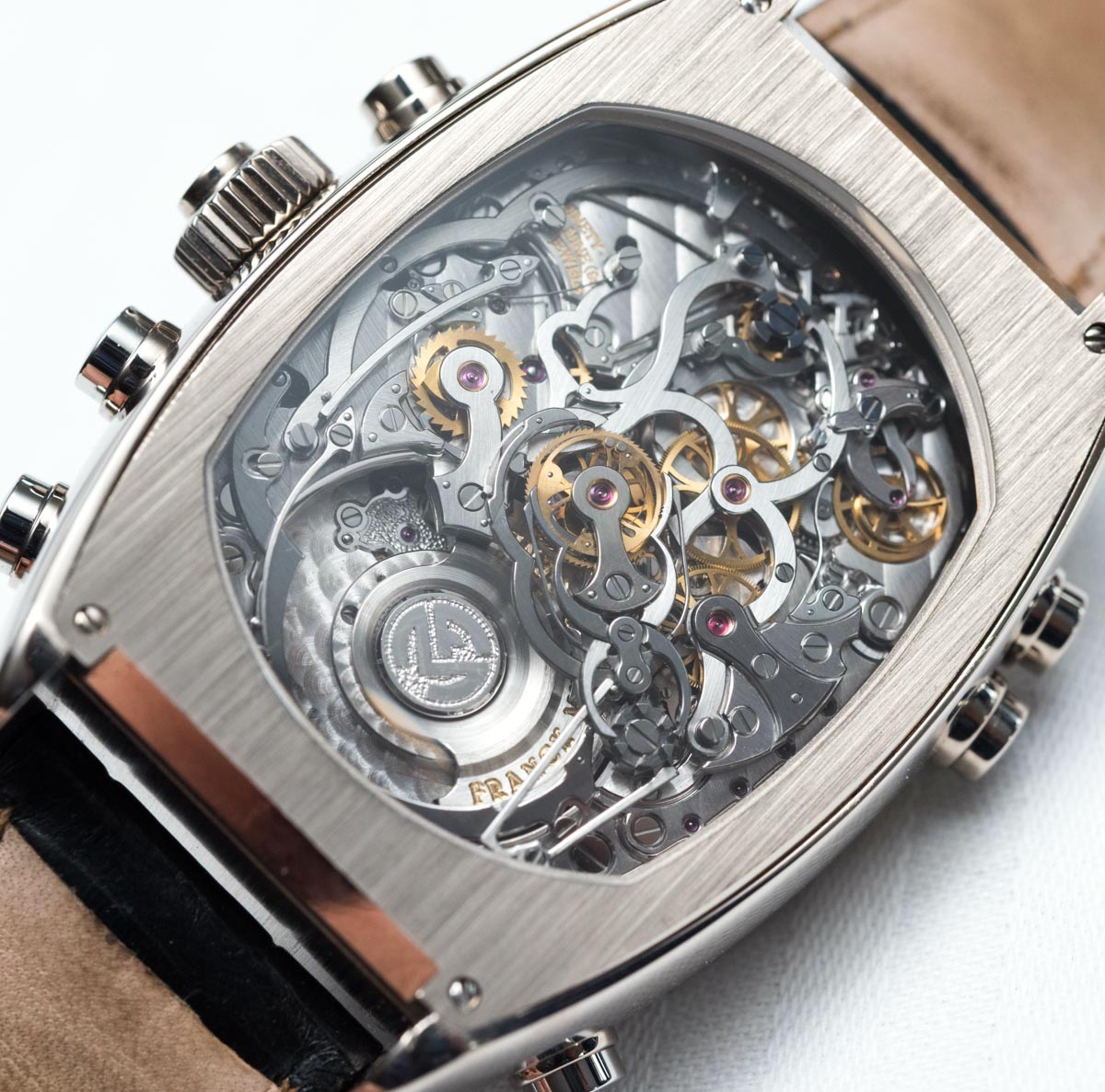 I wish to clarify that the level of complexity in a watch can be measured in more than a handful different ways – from component count through number of complications, indications, complexities and novelty-factor of indications, durability, level and complexity of decorations and so on. Therefore, I will not call this the most complicated ever – although it was widely regarded as such at the time of its launch – because it is a claim easy to undermine by mentioning other watches that are, in their own right, just as worthy of the most superb of superlatives. Another important thing to consider is how the Aeternitas Mega 4 has 36 complications but “””only“”” 23 indications. This is because, as you’ll see from the list below, the list of complications includes mechanical complexities that render a feature more complex/different than it basically would be, hence adding to the total figure of complications – but not always to the number of indications (e.g. flying tourbillon counts as two because it is a tourbillon that is of the “flying” arrangement without an upper bridge holding it down). 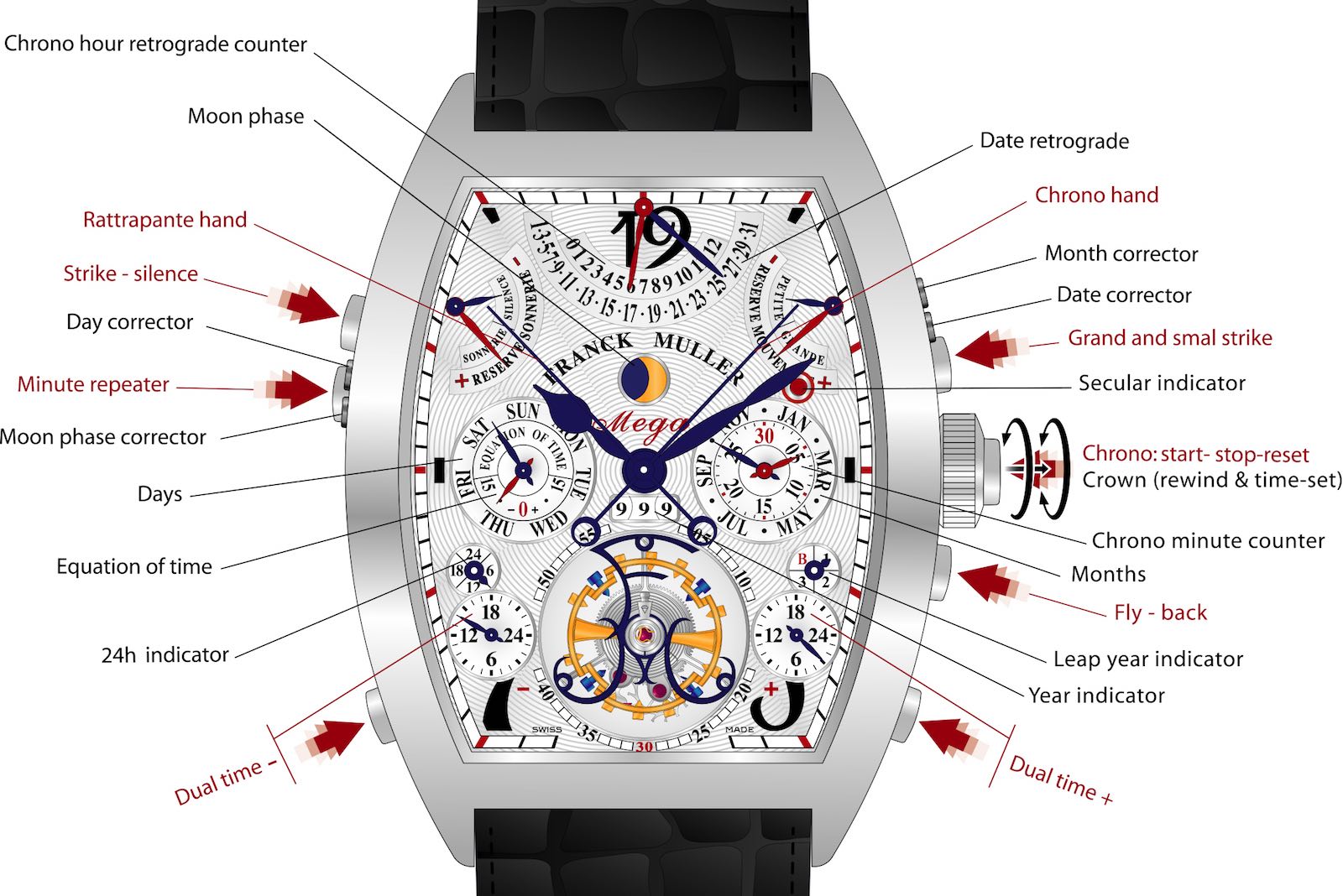 Let us now entertain ourselves with a full list of functions and complications inside the Franck Muller Aeternitas Mega 4 – keeping in mind that this is coming from a hard-to-find, official Franck Muller document from the time of launch, not fished from the interweb. 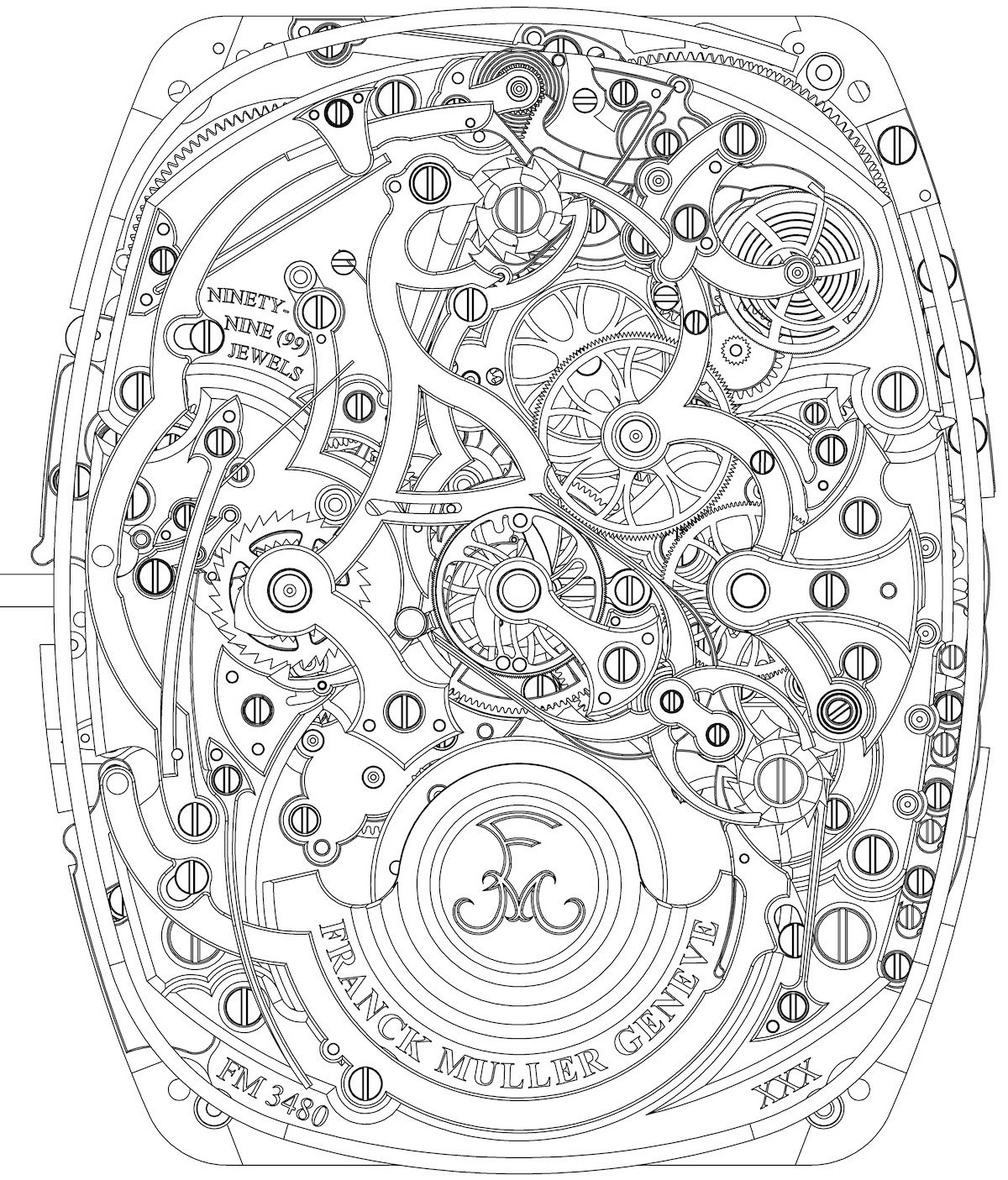 The FM3480 QPSE is the all you can eat buffet of fine watchmaking complications. The movement is 34.40mm wide, 41.40mm tall and a whopping 13.65mm thick. In other words, the movement is about the same size as a small, tonneau dress watch all cased up – except for the fact that it is much, much heavier. I must say, I’m slightly disappointed that Franck Muller didn’t add the entire list of complications in letters to the name of the caliber – Patek style – as I would have loved to see an FM3480 QPSETCWCHRPEGMTARMFBPRDRGSPSSC! Talk about missed opportunities! 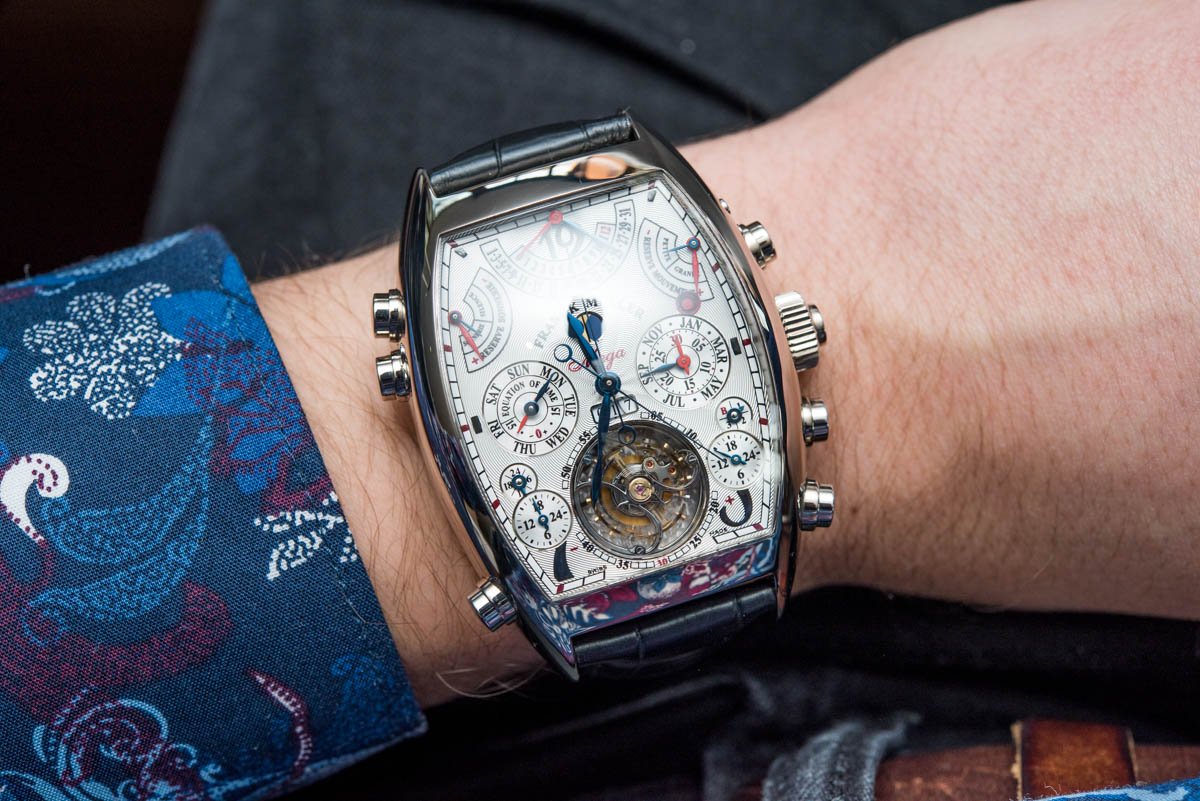 The fun begins when you are handed the watch and first feel its weight. The 18ct white gold Cintrée Curvex 8880 case is 42mm wide, 61mm long, and 19.15mm thick. The weight is absolutely immense and yet, it feels great in a strange, inexplicably awkward way. I’m sure you’ve been there when you’ve been wearing a watch for long and, for a moment, you sort of forgot you had it on and ended up shaking your hand in panic to determine whether or not there was a watch still wrapped around your wrist. Well, I don’t think a sane mind – or even a severely intoxicated one, for that matter – could ever disregard the feeling this watch provides on the wrist. It’s so heavy and intimidating that you are constantly aware of its thickness (not to bump it into things) and its weight… It’s the watch-equivalent of The Mountain’s unnecessarily large broadsword – that’s a Game of Thrones reference you are invited to disregard, just think of a big ass sword.