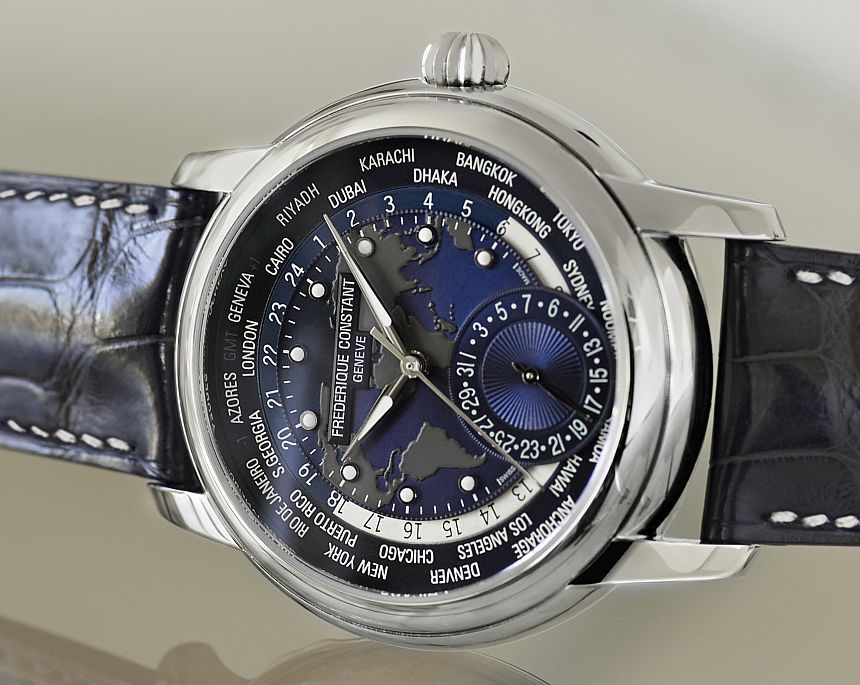 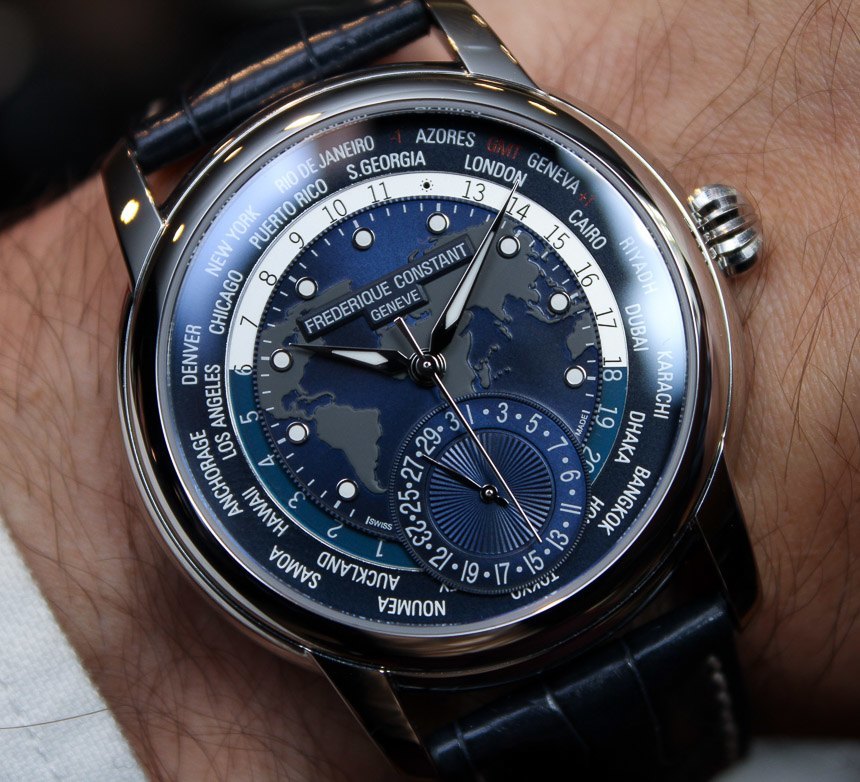 Over the last few years, I have been fortunate to be able to experience a wide variety of watches, particularly those that feature some sort of second timezone indication. While these most commonly take the form of a second hand (with or without a moving bezel) to indicate the second time, less common, but somewhat more visually intriguing, are those watches that rely on cities on an outer disc to display the time. This is the route that the latest Frédérique Constant Worldtimer is following. 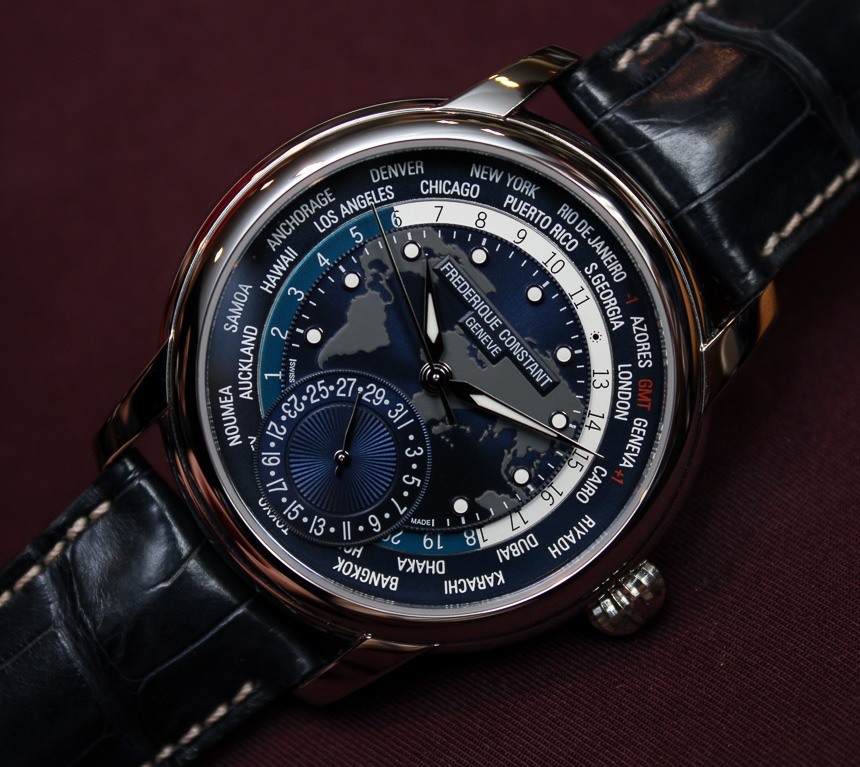 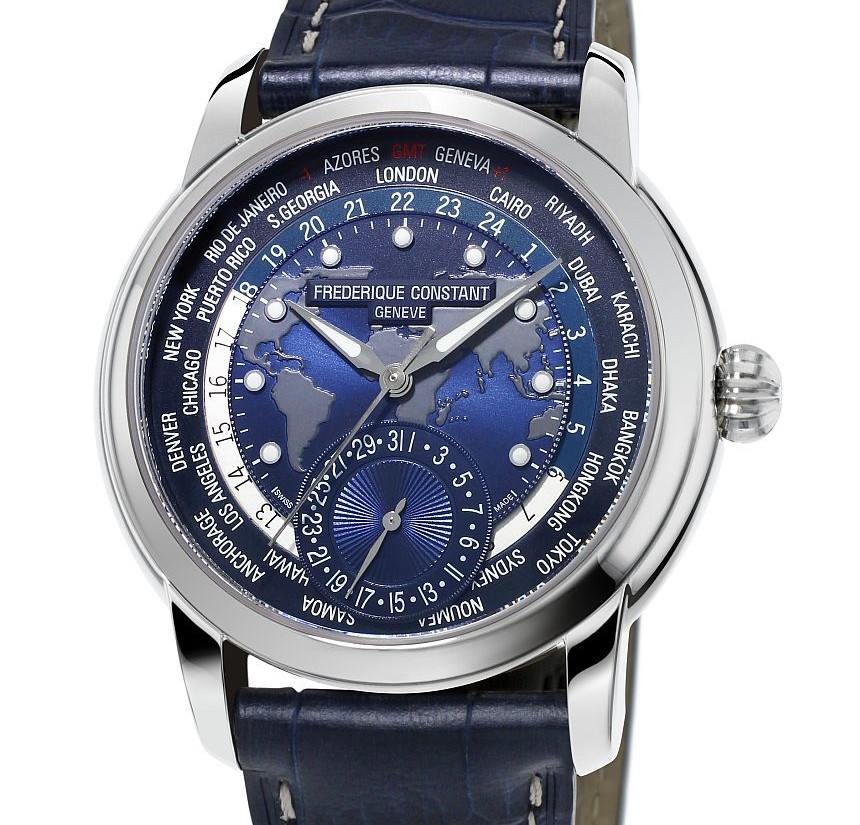 As you can see, the outer ring of the dial has a list of major cities, one for each major time zone. Set in from that a bit is a bi-color ring that is actually what is used to read out the time in all of those cities. What you do is that you set the city that represents your home timezone to the 12 o’clock position, and then the movement does its work, letting you read the current time under every city name from the rotating 24-hour disc. The reason for the bi-color of this disc is so you have “at a glance” capability to tell if it is day or night in the city. 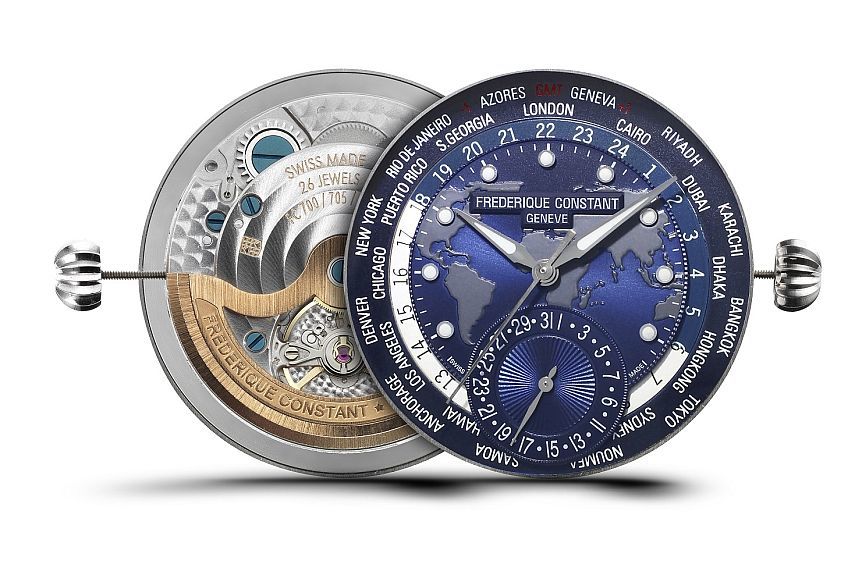 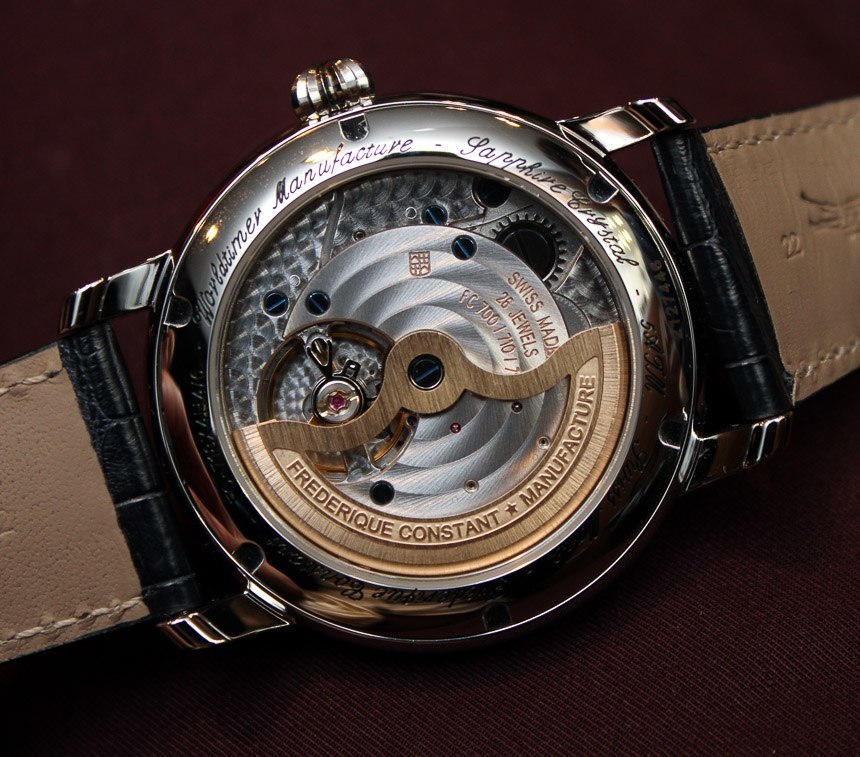 All of this is made possible by the FC-718 automatic movement, which is built in-house by Frédérique Constant. Aside from the obvious draw to something being labeled as in-house, this also allowed them to build things in such a way that all of the setting is accomplished via the crown – there are no additional buttons or pushers to fiddle with. This, of course, makes for an easier watch to set and use. What surprises me about this particular design (since they could have built it how they wanted) is the large date display at 6 o’clock.

On one hand, I appreciate that the size was done so that they could keep it legible. Nevertheless, I would have preferred to see it removed, or substituted for a simple date window – or perhaps an “oversize” one. Along with knocking out visibility for five of the twenty-four time zones the watch is tracking, it also obscures a large part of the world map. There is just something about this that feels off to my eye – at least from the photos that we have available to us. 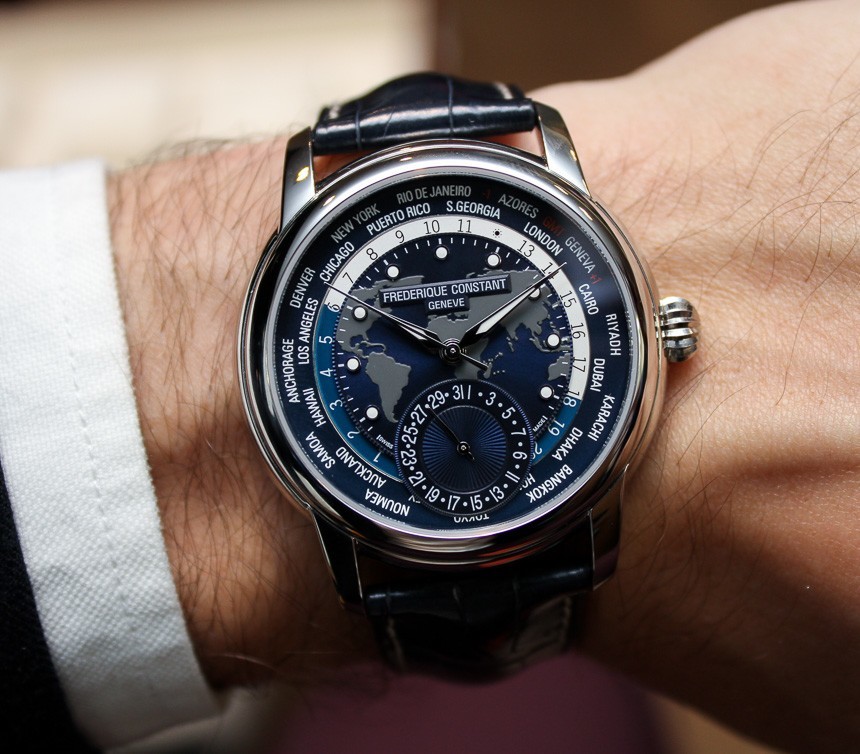 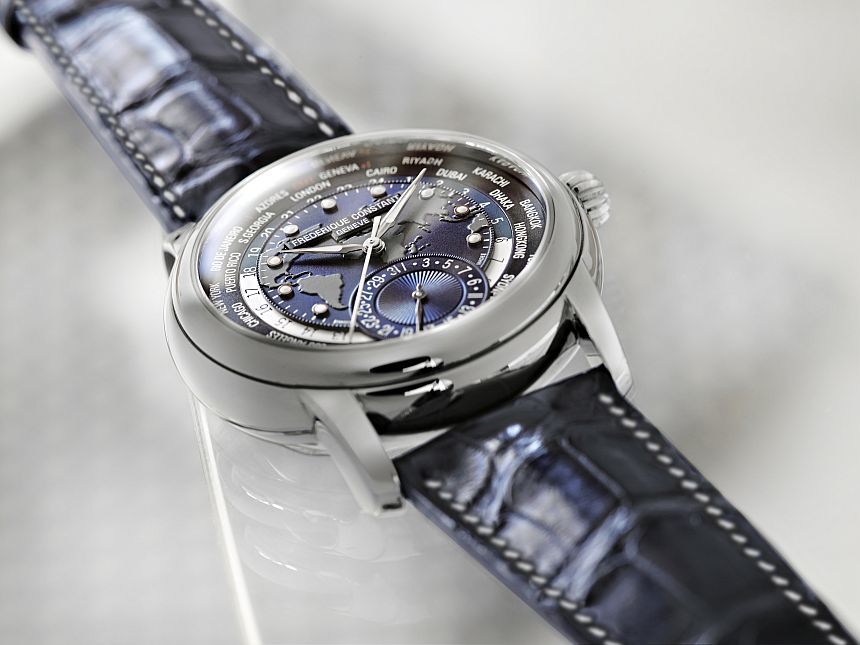 That dial issue aside, this really does look to be a rather stunning watch. Dark blue is the predominant color, with white showing up on the outer edges, and an anthracite grey used for the raised continents on the world map. Oh, and do not overlook the white luminant used on the handset and pips on the dial – a nice addition, if you ask me.

This is all set in a polished case paired with a blue alligator strap, making for a rather sharp watch that can work as a dressier piece while you jaunt around the world. Or, you know, just need to know what time it is for some of your international co-workers. 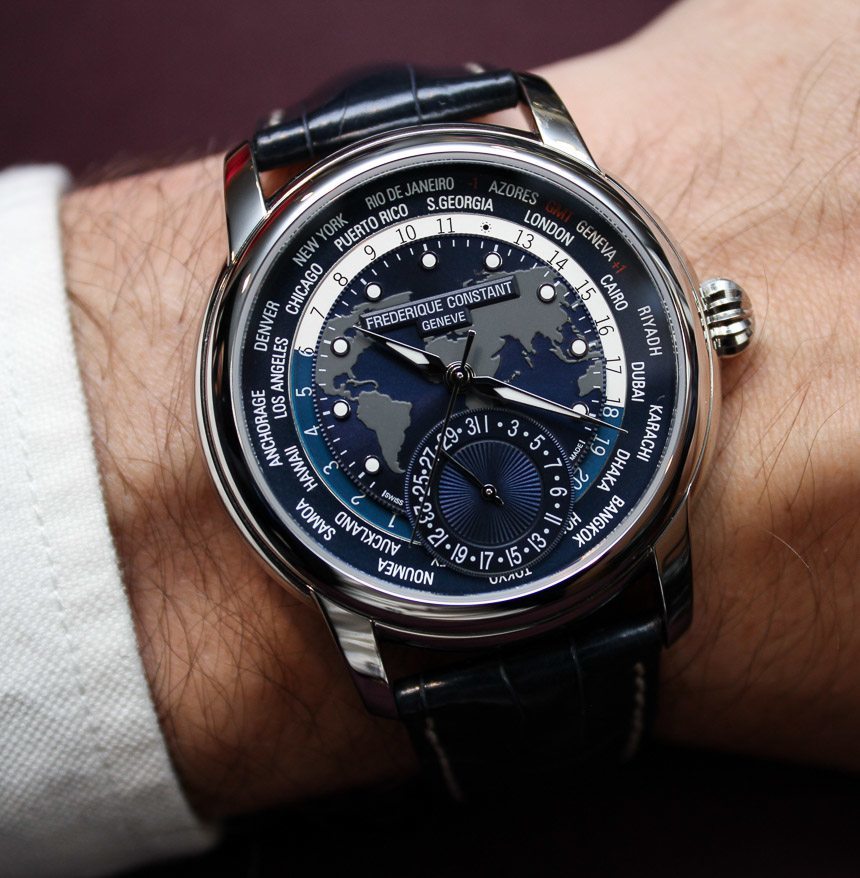 With an expected price of around $4,195, the Frédérique Constant Worldtimer is expected to be available sometime after its introduction at BaselWorld in March this year, perhaps as early as April. I find it to be a visually interesting take on a world time watch, and it of course continues the brand’s trend of offering polished designs with in-house movements – which really is quite something, when you consider that they manage to maintain a rather affordable entry point for a Swiss luxury watch. While I personally could do without their choice of date display, this is ultimately a personal preference, and I am sure that some in-person wrist time may temper that opinion. frederique-constant.com