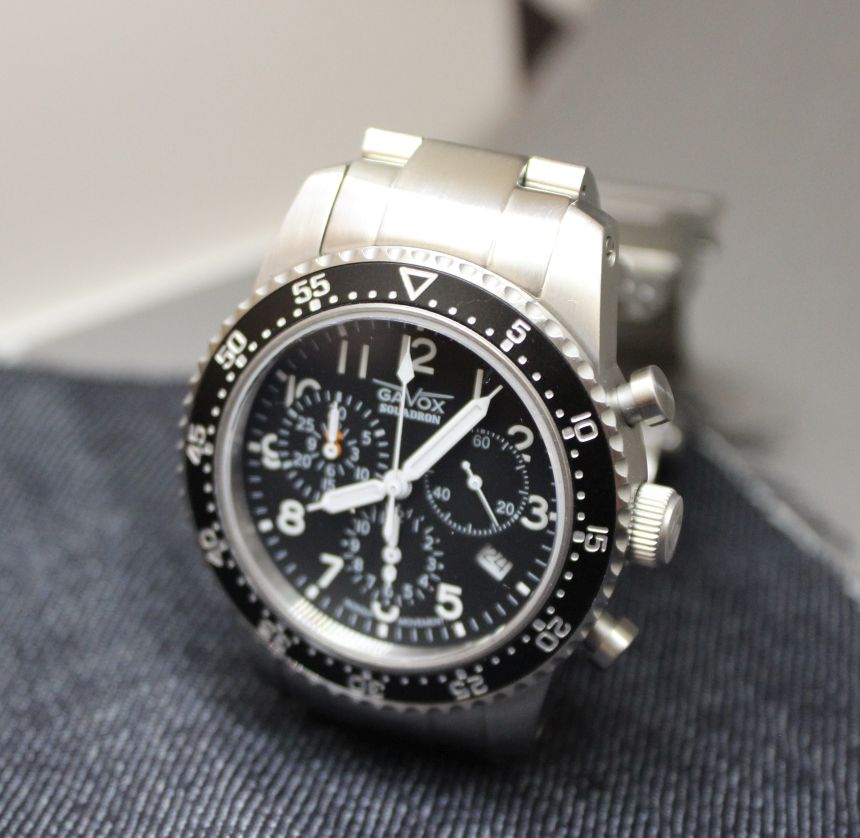 These days, we’ve got quite an abundance of watches that either intend to mimic military or aviation watches of the past, or even that are re-releases from older catalog items. If you want to get into a watch that has actually been on the wrists of service members, however, your options are a bit more limited, unless you go vintage. Fortunately for you, there is a new option on tap – the Gavox Squadron. 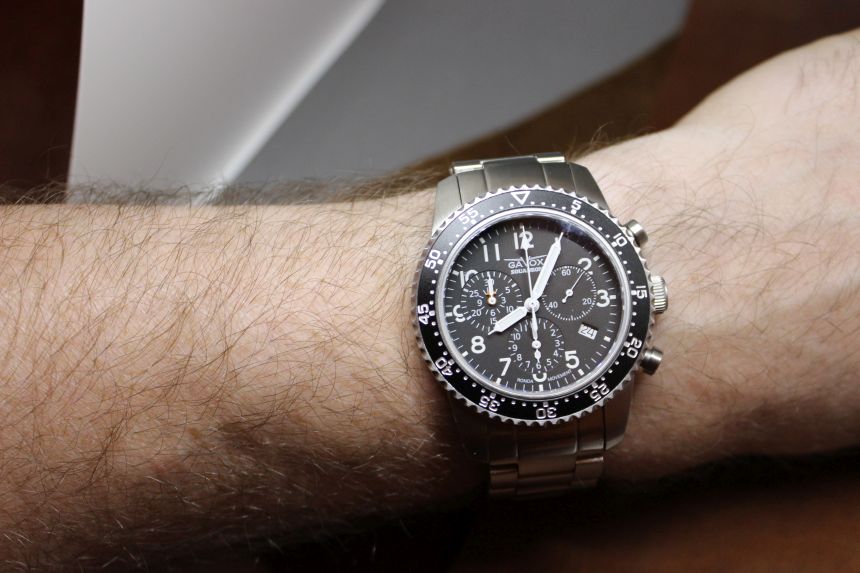 Now, to look at the piece, you immediately know that it’s a chronograph. Past that, though? You’d be hard-pressed to tell that this was a military-issue piece, let alone one for an Air Force. That’s precisely what it is, however. In 2013, the Belgian Air Force reached out to Gavox to create a watch that would meet their needs. 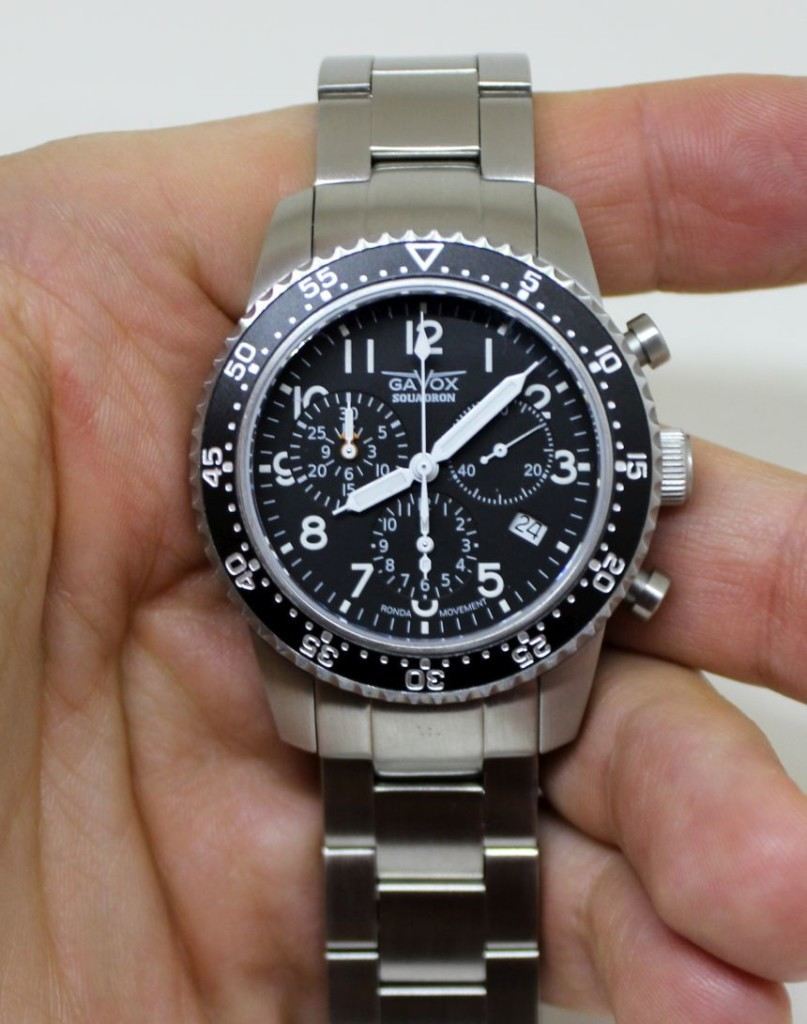 On the surface of it, most of these specs will be familiar to us – sapphire crystals with AR coating, 100m water resistance rating, and an outer timing bezel, for starters. When we get into the functionality, though, we see some new twists. First up, let’s have a look at the chronograph. It’s of the 12-hour variety, but it accomplishes this via a single register (at 9 o’clock) that tracks both the minutes and hours (via two hands, of course). 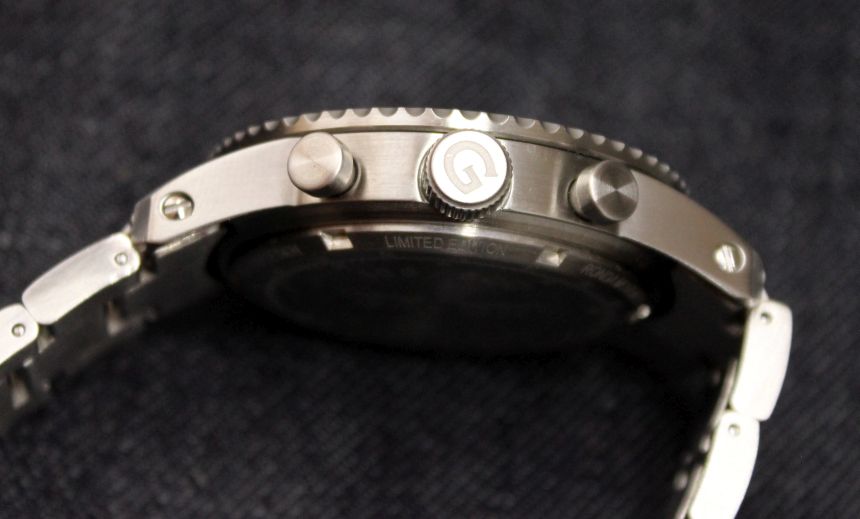 What does that mean the other registers are tracking? The one over at 3 o’clock is the running seconds; no surprises there, as on just about any watch intended for professional use there has to be an indication that the watch is indeed running. It is the one at 6 o’clock that’s unexpected: it is actually how you set the alarm. Given that it has a 12-hour scale, you can set this no more than 12 hours in advance. Once set, though, you’ll get a digital chirp going off at the appointed time. It was a nice feature, and works as advertised, although in a noisy setting, it is near impossible to hear. In an office or at home, however, it works just fine. Regardless, it is not something we see that often in an analog watch, and it is all made possible by a Swiss-parts version of the Ronda 5130.D. 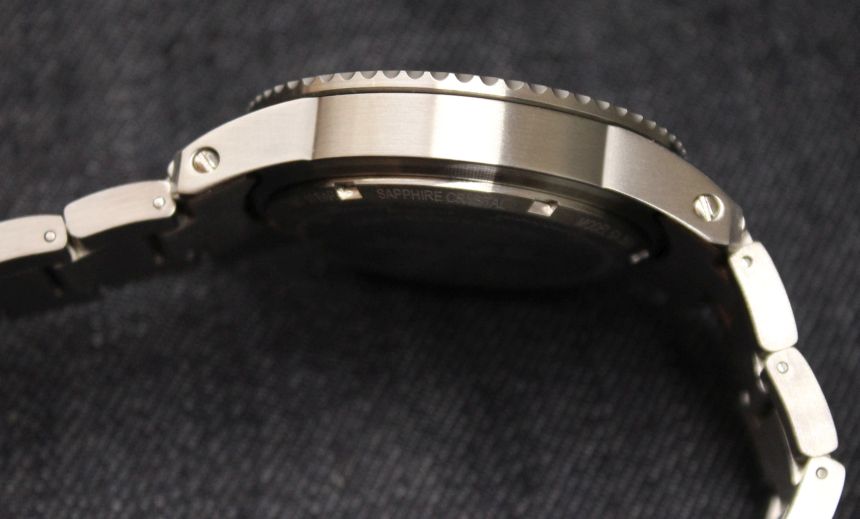 That covered the needs the Air Force had, in terms of pure capability, and it was left to Gavox to determine the styling. As you might suspect, they looked to the past for the Gavox Squadron’s design. Specifically, they drew inspiration from the aviation chronographs of the 1950s. This nets a very crisp and readable look – the white markings, numerals, and handset contrast sharply with the matte black dial. 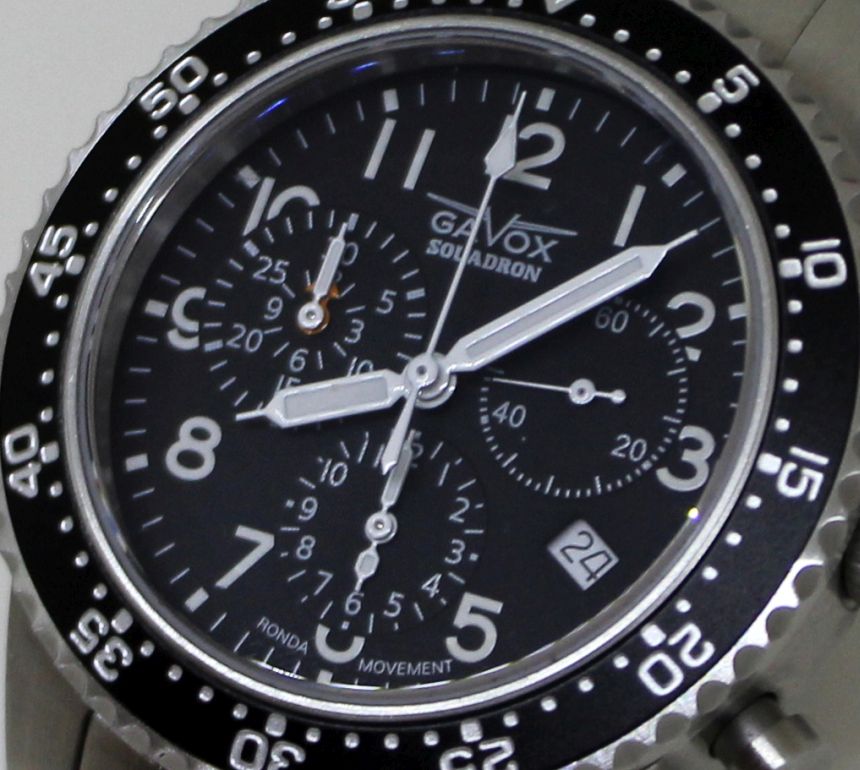 With the handset, I thought Gavox did a good job. The shorter hour hand calls to mind the fliegers that have the secondary hour track printed on the inner ring, and I like the needle tips both hands exhibit. If it were up to me, though, I would have perhaps widened and lengthened the hour hand a touch, as the taper from the needle tip does make it seem shorter than it is. 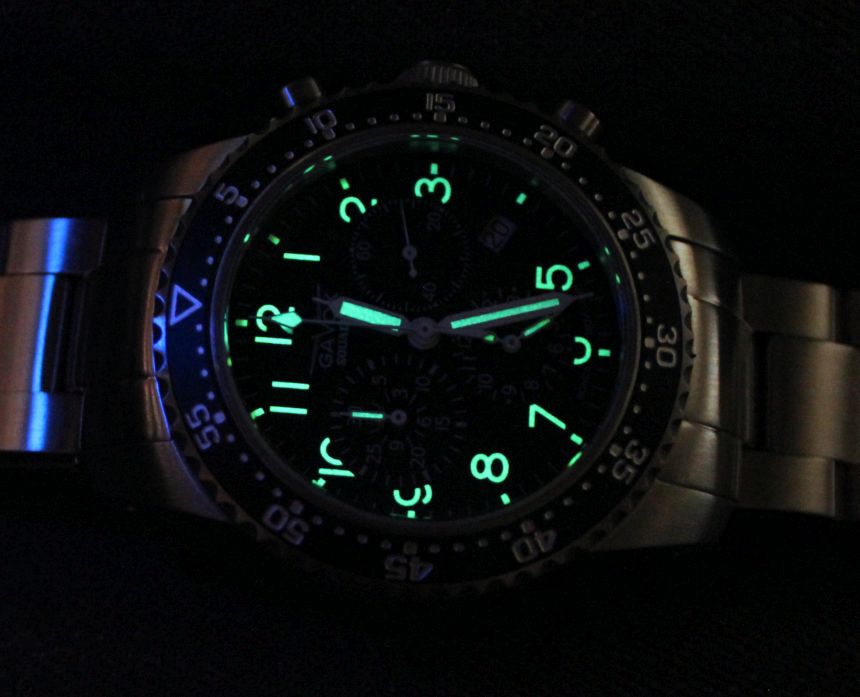 When the lights get low, it is worth noting that there are no problems telling the hands apart – there is an obvious differentiation between the two, and they stand out quite well, picking out the time against the luminous numerals. In this capacity, you can also continue to use the chronograph functions in the dark, as the the chrono seconds hand (as well as the chrono hour/minute hands) are lumed. It was a little surprising to not have any lume on the bezel, but it should contrast enough in a low-light situation that it would still be somewhat usable. 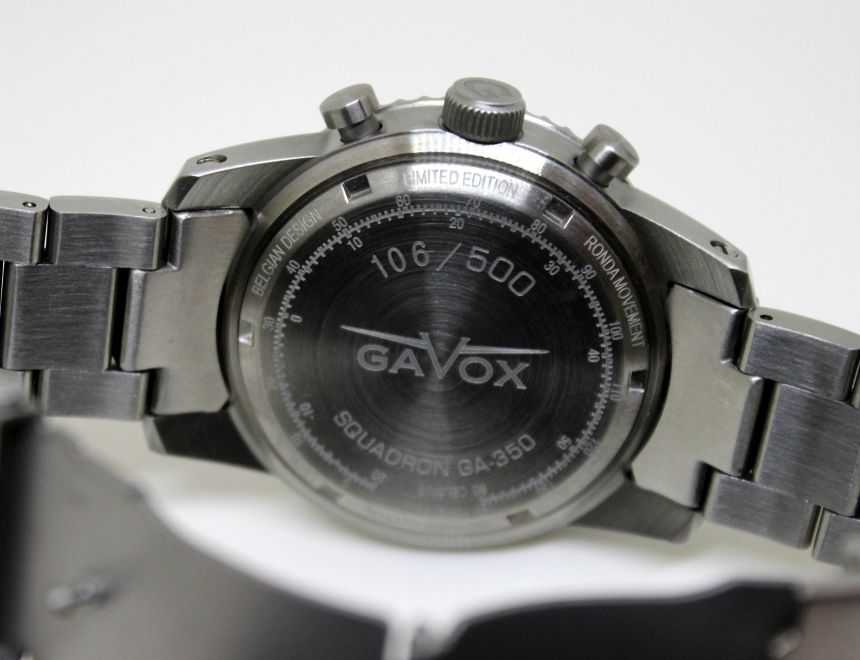 In wearing this watch, it is one that I immediately became comfortable with. It takes a little remembering to recall which beep means the alarm is on (or off), but past that, the functionality is something we are all familiar with. With its weight of 166g, it is a watch you feel on the wrist, but it wasn’t overbearing by any means. And, should you want to lighten the load a bit, you could certainly opt for any one of the straps Gavox sells to replace the steel bracelet. With the case dimensions coming in a 41mm wide by 12mm thick, it is one that easily slips under a shirt cuff, and works well in a variety of situations. The brushed finish to the case and bracelet gives a bit of a muted shine that works well with the matte dial. 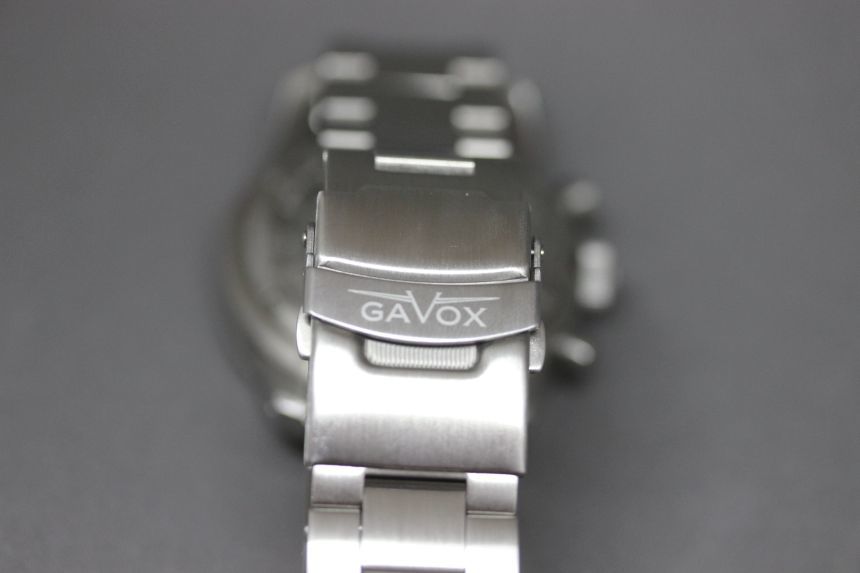 I have had several different Gavox models cross my desk over the last year or so, and I have to say, the Gavox Squadron is definitely a big step up in terms of what the brand is offering (both in looks as well as functionality). When it comes to those looks, you do have some options as, aside from the aforementioned straps, you can opt for the stainless steel finish (as we have shown here), or go for a black PVD (and for that, the bracelet has the coating applied before assembly, for thorough coverage). With pricing coming in at $480 (for the stainless) or $520 (for PVD), this is an attractively-priced option for those looking for a mil-spec watch – or just a cleanly executed chronograph with some welcome extra functionality. gavox.com 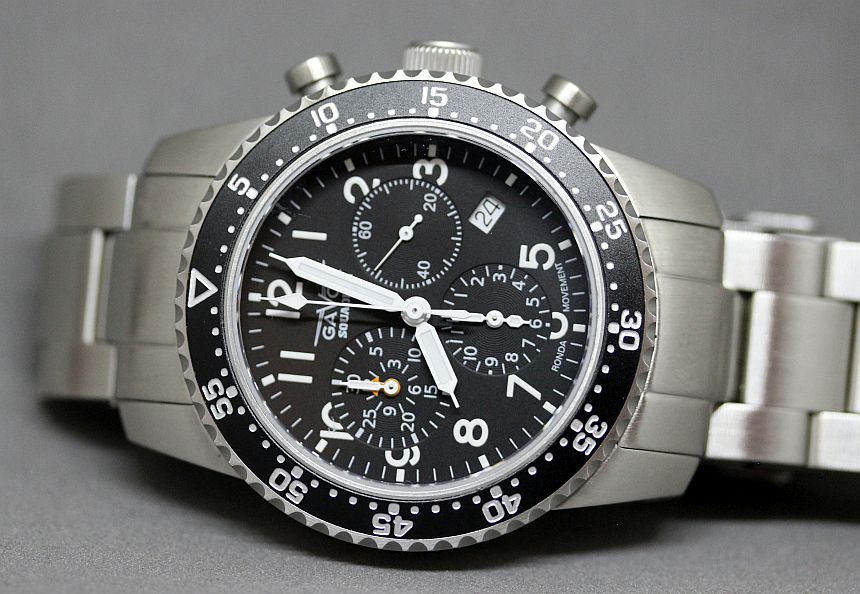 Necessary Data
>Brand: Gavox
>Model: Squadron
>Price: $480 (stainless), $520 (PVD)
>Would reviewer personally wear it: Yes, I likely would, though chronographs don’t get as much wrist time for me these days.
>Friend we’d recommend it to first: While it has definitely got mil-spec appeal, I think this is a good all-around sport watch, if someone is looking for more than a simple three-hander.
>Worst characteristic of watch: For me, I would have to go with the alarm – I wish it were louder, or perhaps vibrated rather than beeping.
>Best characteristic of watch: Just how the style was executed. While it looks like a basic tri-compax layout, it manages to mix things up a bit.