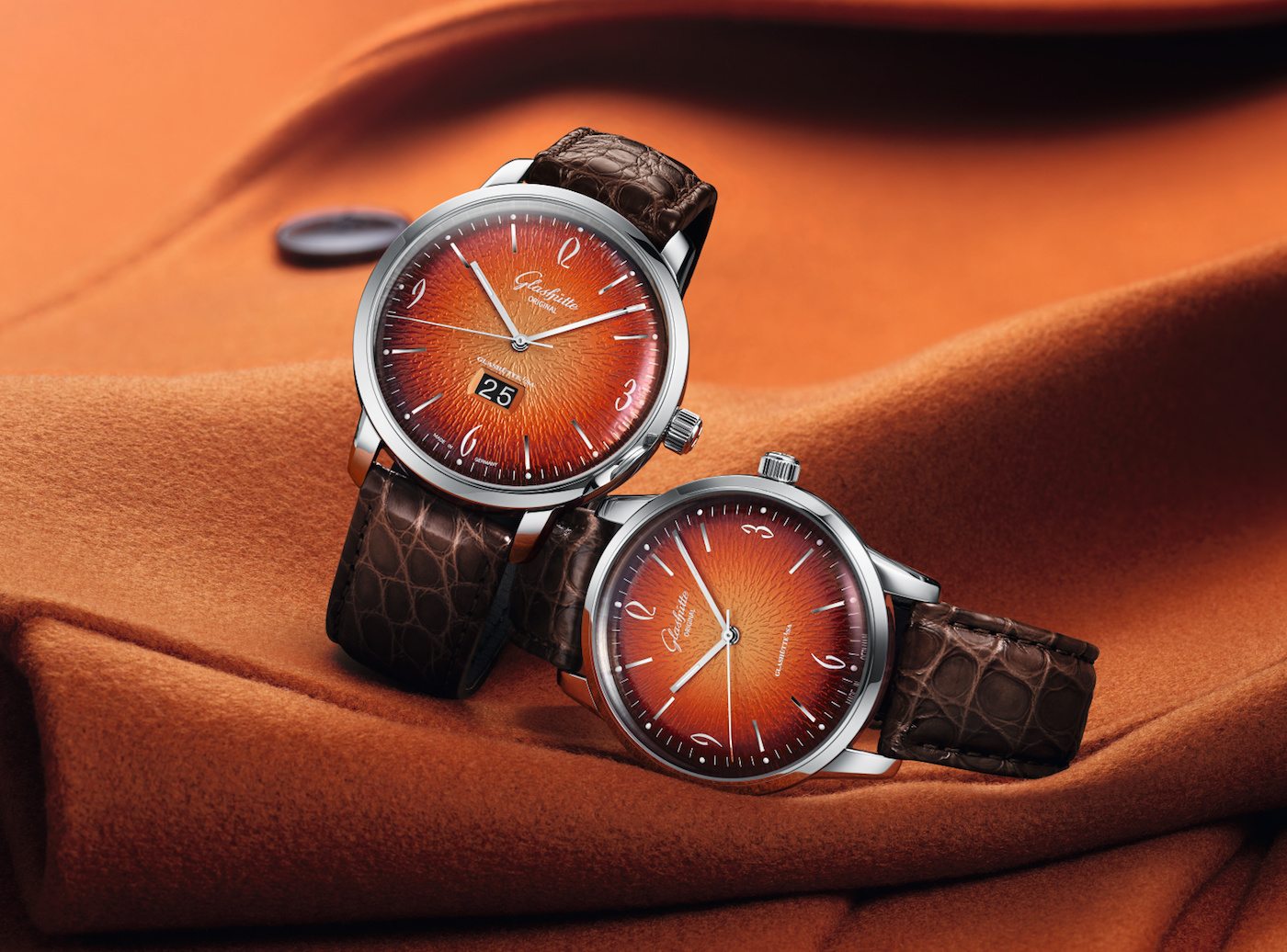 I’ve been hoping for a while that this release would drop into my lap. As coincidence would have it, I spent a couple of hours this morning poring over the green-dialed version released by Glashütte Original last year. It was a truly show-stopping piece. In all honesty, GO is not one of my favorite Glashütte brands — but that would never stop me from admiring how the manufacture has obtained the respect and affection of so many fellow watch enthusiasts. However, these watches, with their eye-catching colors, patterned, dégradé dials, and period-appropriate numerals are some of the most desirable watches to come out of Saxony post-reunification. With the release of the Glashütte Original Sixties and Sixties Panorama Date Annual Edition Watches For 2019, the already stellar collection gets a new member. And the wallets of brand fans look set to take another quick hit. 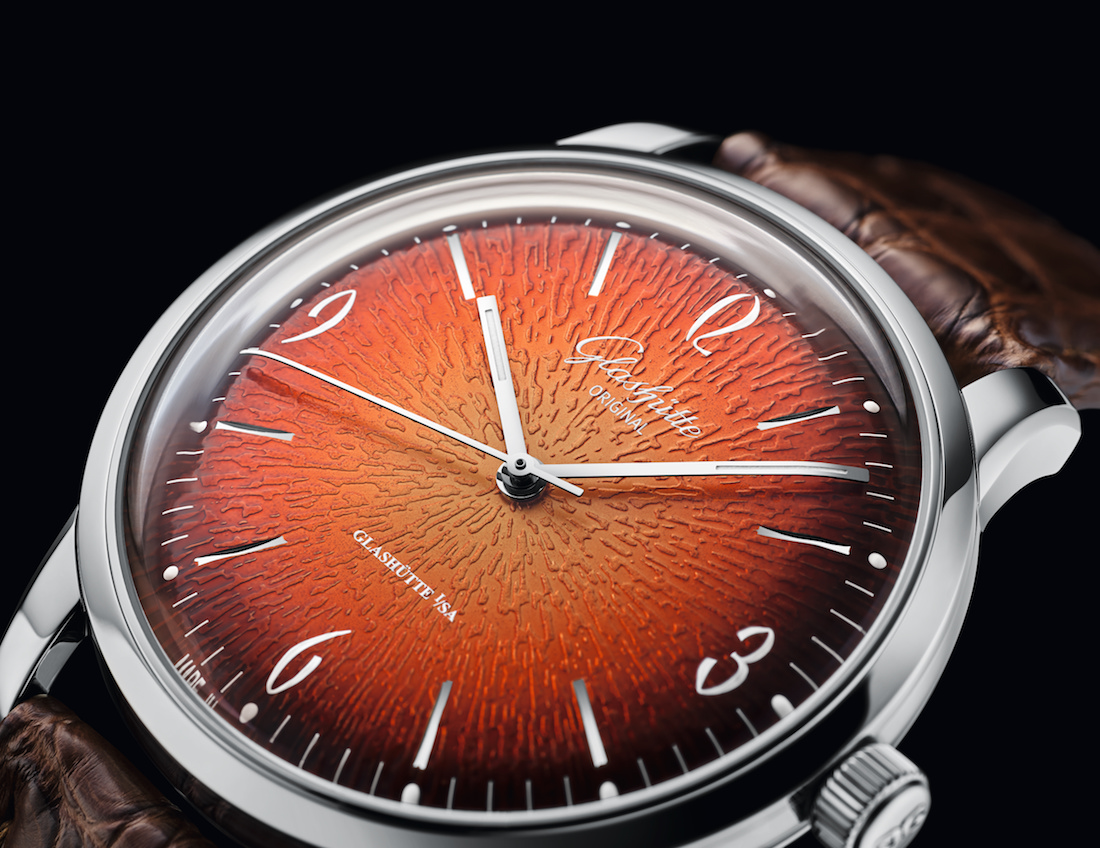 There are two versions available in this release. A time-only model (ref. 1-39-52-13-02-04) and an option featuring the classically German panoramic date complication (ref. 2-39-47-09-02-04). Both feature the same orange dial decoration. My favorite release from last year was the green-dialed version,  but this follow-up is close behind. It seems that Glashütte Original might have listened to Patrick’s comments from last year’s write-up, as this color scheme really does look like the Eye of Sauron, burning away on your wrist. 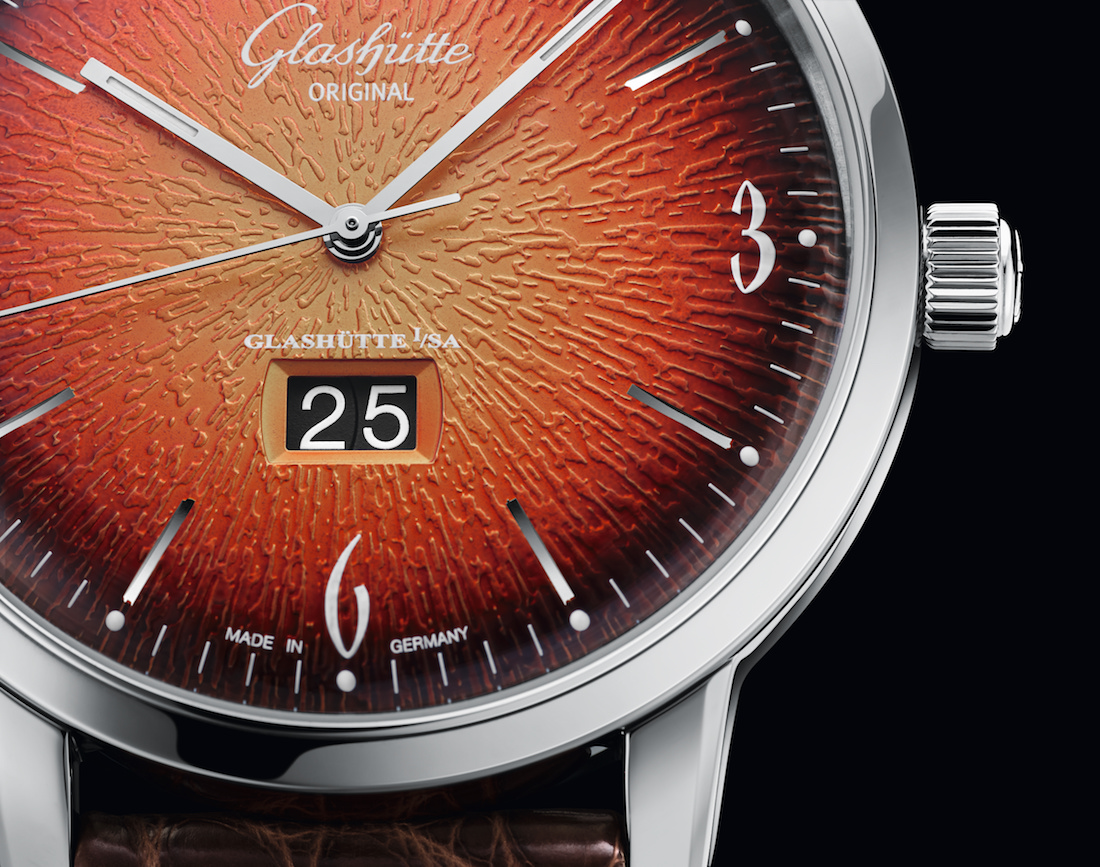 The time-only is my preferred model, as it gives center stage to that incredible dial pattern. The dégradé fade is a gentler way of using shocking colors on the dial. The dial is slightly domed and visible through a sapphire crystal that has been treated with an anti-reflective coating on both sides. The manually applied, diamond-cut indices stand up slightly from the dial, adding even more depth to proceedings. 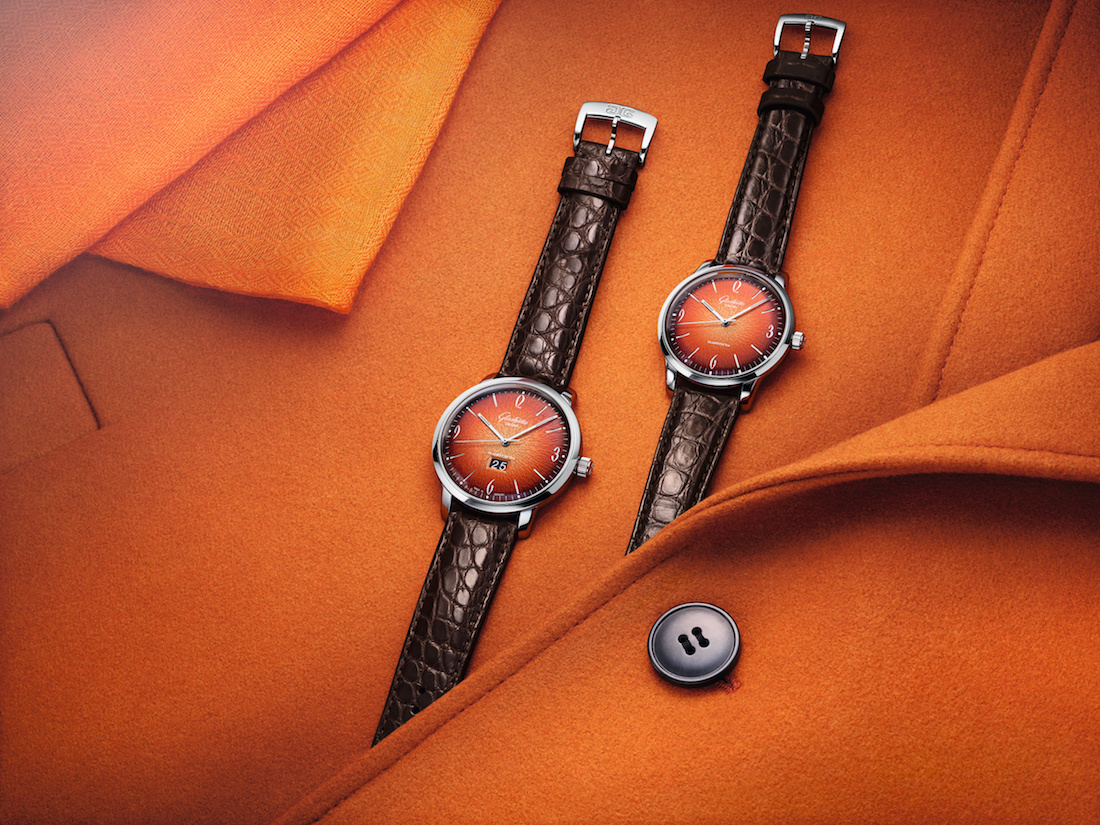 Perhaps the most fascinating thing about these dials is the underlying surface finish. Glashütte Original works with a specialist dial maker in Pforzheim to produce these beauties. Using original tools from the 1960s — the transformative decade that inspired this whole collection — a low-relief pattern is applied to the dial blank before coloration, by way of a 60-ton press. 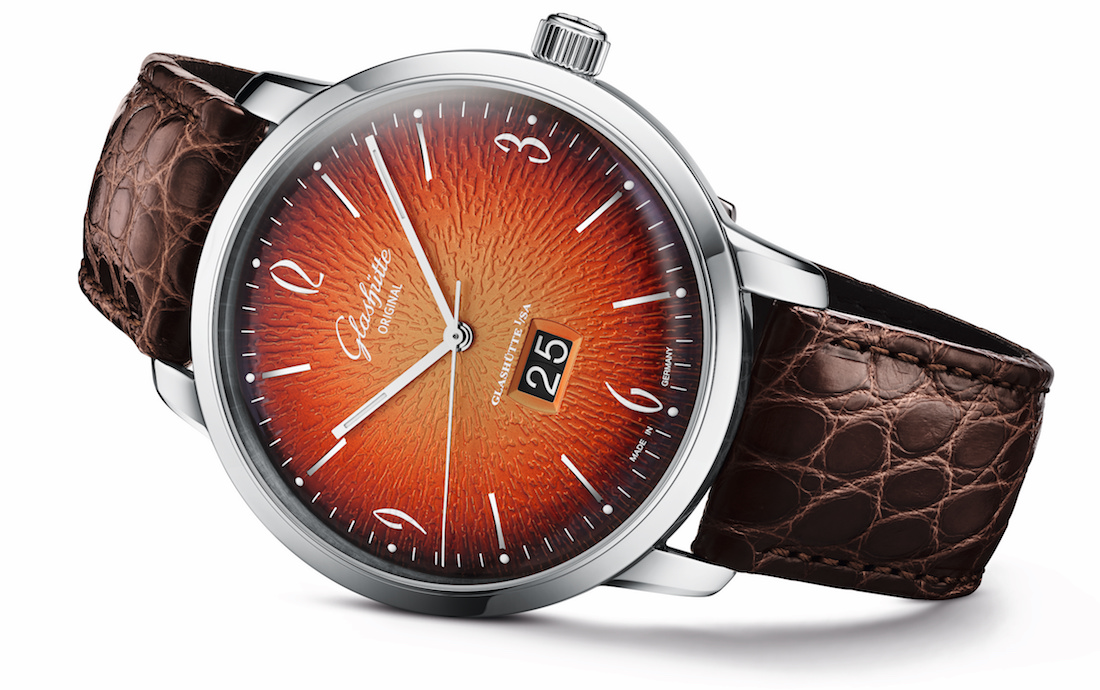 Inside stainless-steel cases that are water resistant to 3atm, are two in-house calibers reside. The time-only “Sixties” model is powered by the 39-57, while the “Sixties Panorama Date” is driven by caliber 39-47. 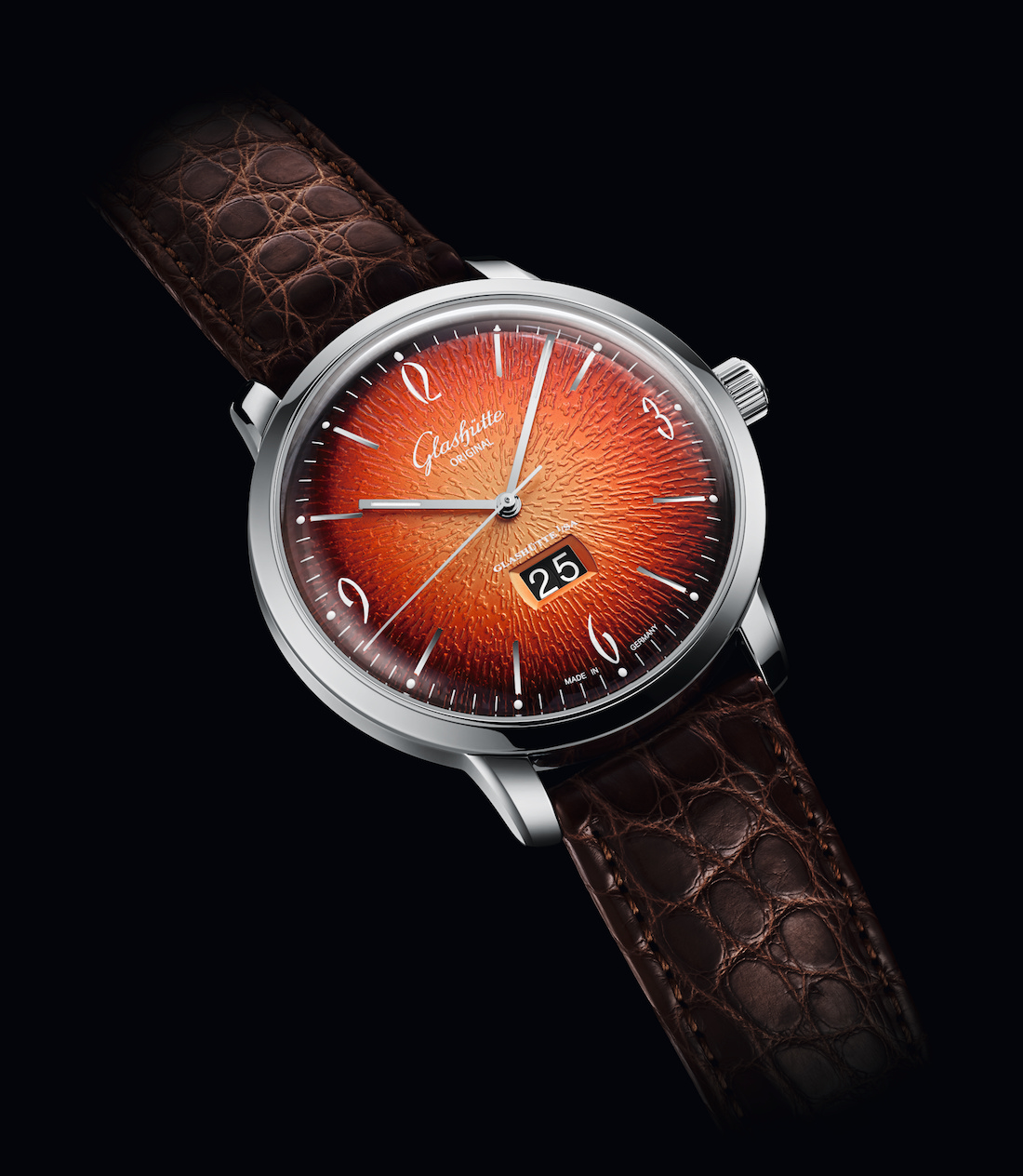 Both movements have a 40-hour power reserve and are self-winding via a centrally mounted, 21k-gold rotor weight. The Sixties Panorama Date model is 42mm-wide and the thickest of the two at 12.4mm-tall. In comparison, the Sixties measures 39mm across and is a gracile 9.4mm-thin. Both models are equipped with a sapphire display back, through which the traditionally finished movements can be admired. 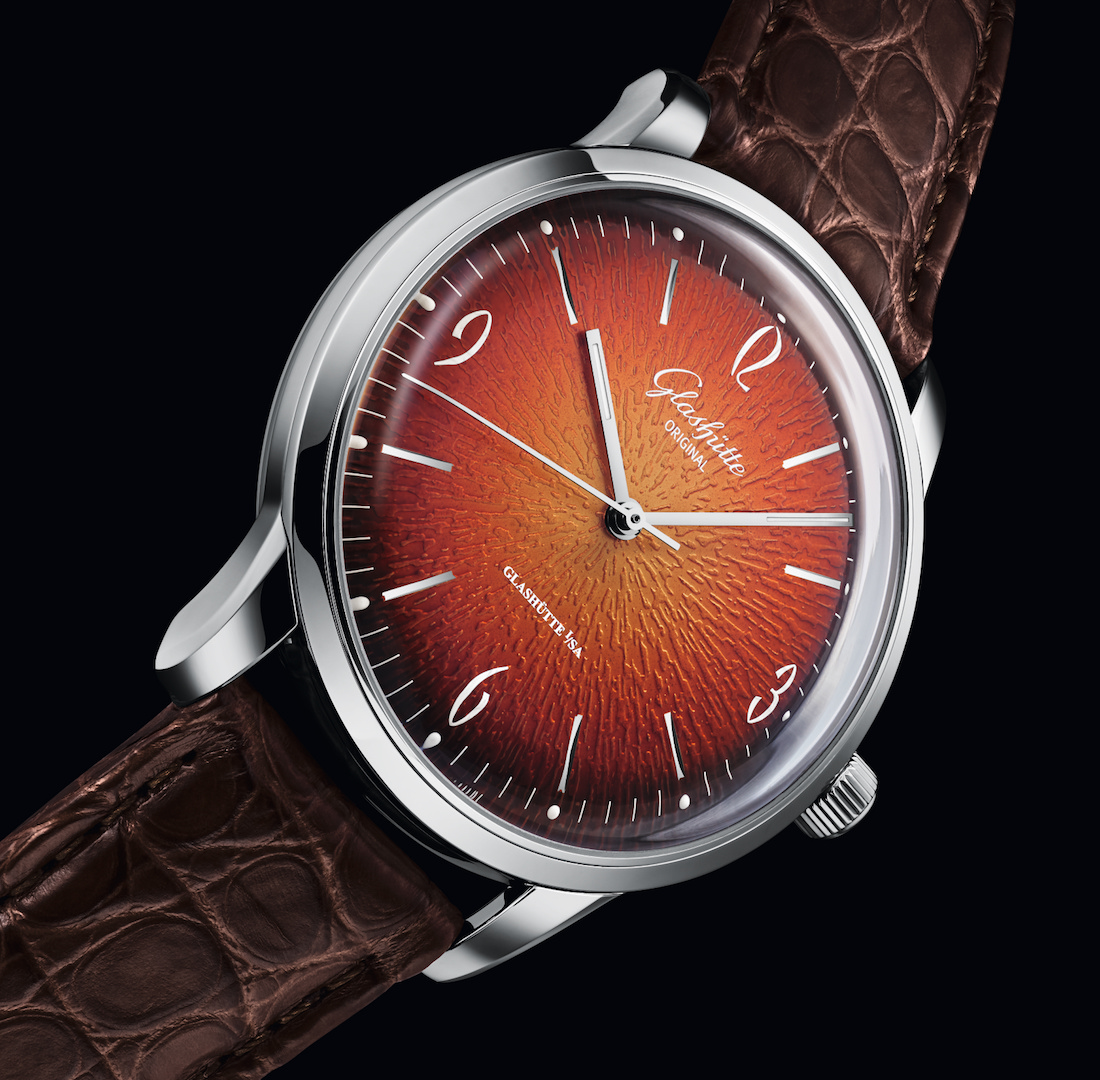 As one of Germany’s most versatile and competent brands, Glashütte Original has been a major player for a long time. Despite their pedigree, though, I have always struggled to get excited about some of the core collection. If I were being harsh, I would say I find a lot of their wares a bit too Germanic in their focus on quality of execution, legibility and functionality — but I do, of course, understand that that’s precisely what makes GO so appealing to others. Additionally, the price-point seems like it’s on a bit of an island. Because these watches are more affordable (though decidedly less luxurious) than Lange, and more expensive (though some could say less fun) than NOMOS, I always thought it would take a die-hard fan of German watchmaking to buy into the collection. 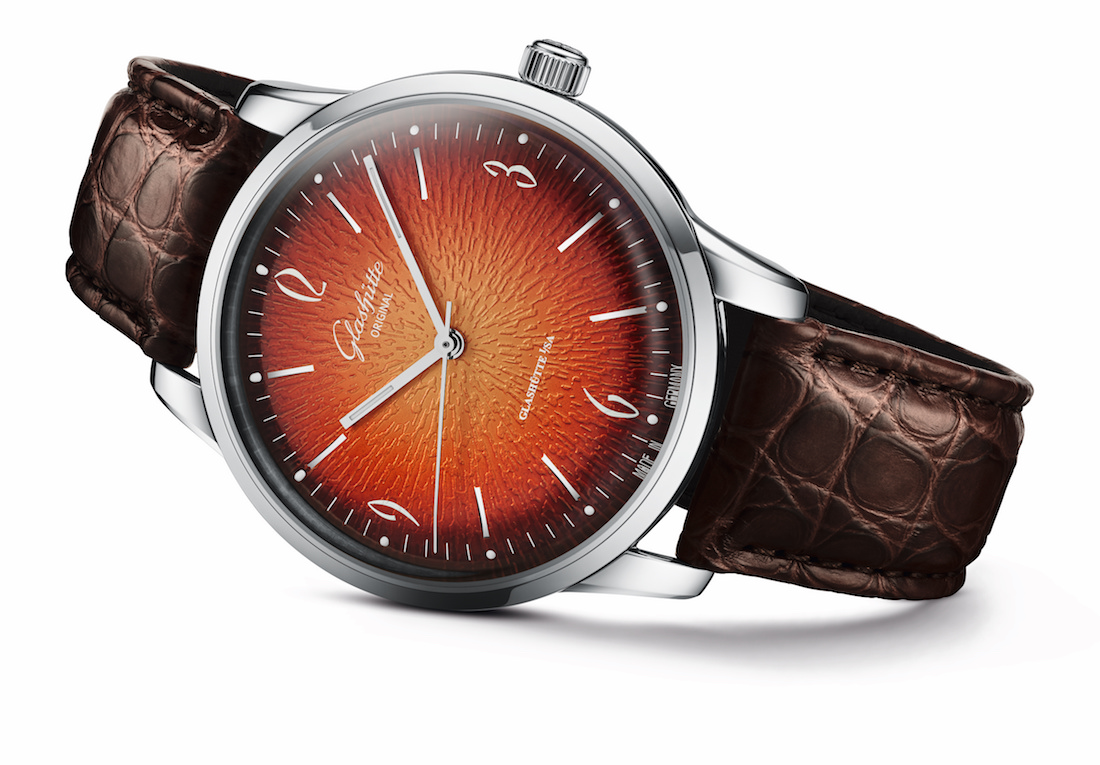 But the Sixties collection has changed all that. Suddenly Glashütte Original has a serious voice. It is a massive — and welcome — statement of identity. The release is nothing like anything their competitors are doing. And, pleasingly, the price for the time-only model feels just about perfect. Now there is an option that boasts all the technical and machining qualities of the brand that is also screaming with character. The Glashütte Original Sixties orange watch doesn’t just demand your attention, it yells at you from across the room and refuses to pipe down until you pay it some mind. The retail price of the Glashütte Original Sixties And Sixties Panorama Date Annual Edition Watches for 2019 come in at $6,400 for the Sixties model and $8,000 for the Sixties Panorama Date. To learn more, visit glashuette-original.com.