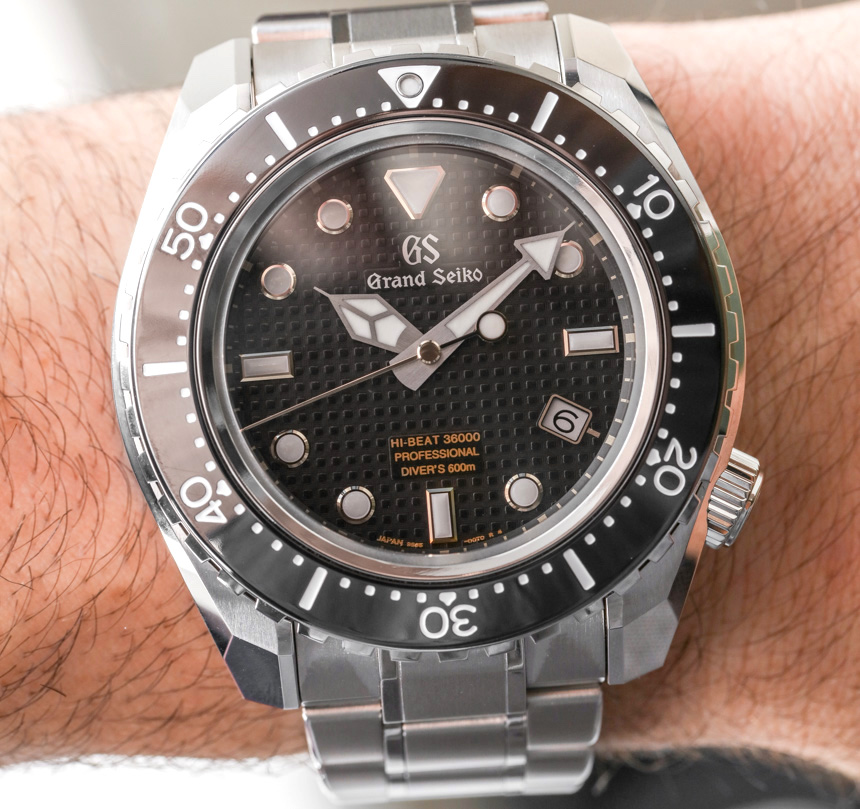 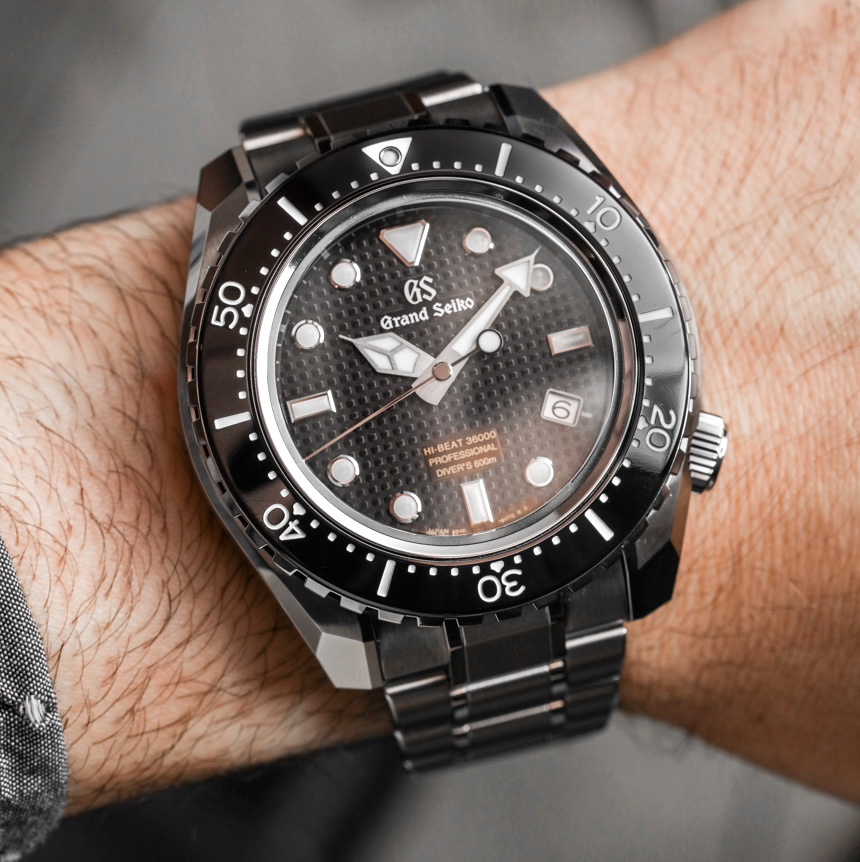 Baselworld has ushered in a season of dramatic change for Grand Seiko. Not only has the brand announced it will be presented as a separate brand from Seiko from 2017, it also is undergoing a rebrand of sorts – discontinuing all Grand Seiko watches in the collection as of February 2017 and replacing them with updated dial branding, interesting new finishes, and new price points. Amongst those riding atop the great Kanagawa wave of change is the reference SBGH255 Grand Seiko Hi-Beat 36000 Professional 600m Diver’s watch. 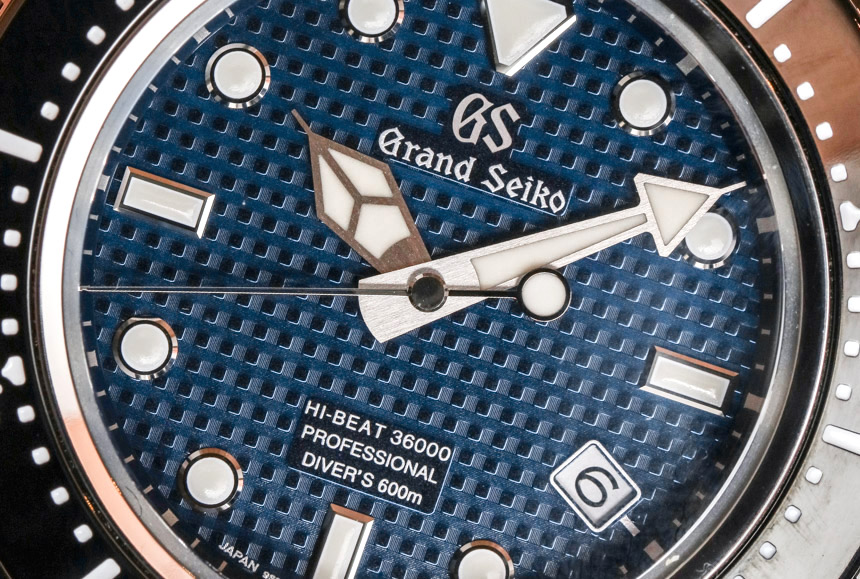 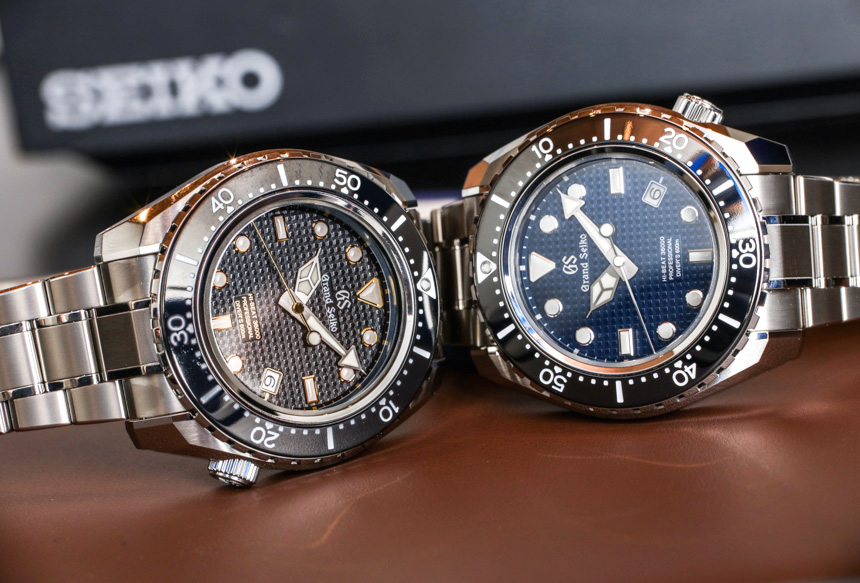 Technically, the SBGH255 – and its limited-edition blue companion ref. SBGH257 – is an entirely new reference with an entirely new case, but the design should look familiar to any fans of the SBEX001 – a “standard” (albeit limited edition) Seiko in the Prospex collection, and the only one therein to use the same 9S Hi-Beat movement found in this Grand Seiko variant. However, what makes this particular watch special, is that it marks the first time that Grand Seiko has spec’d one of its saturation divers with a fully mechanical movement, having already offered divers equipped with both 9F quartz and 9R Spring Drive movements. 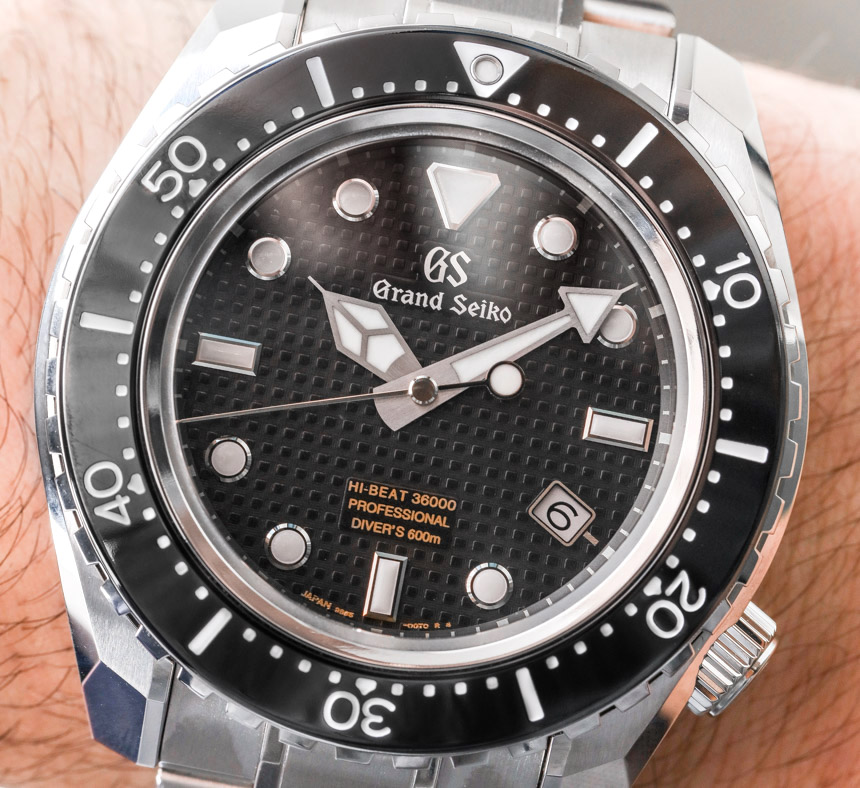 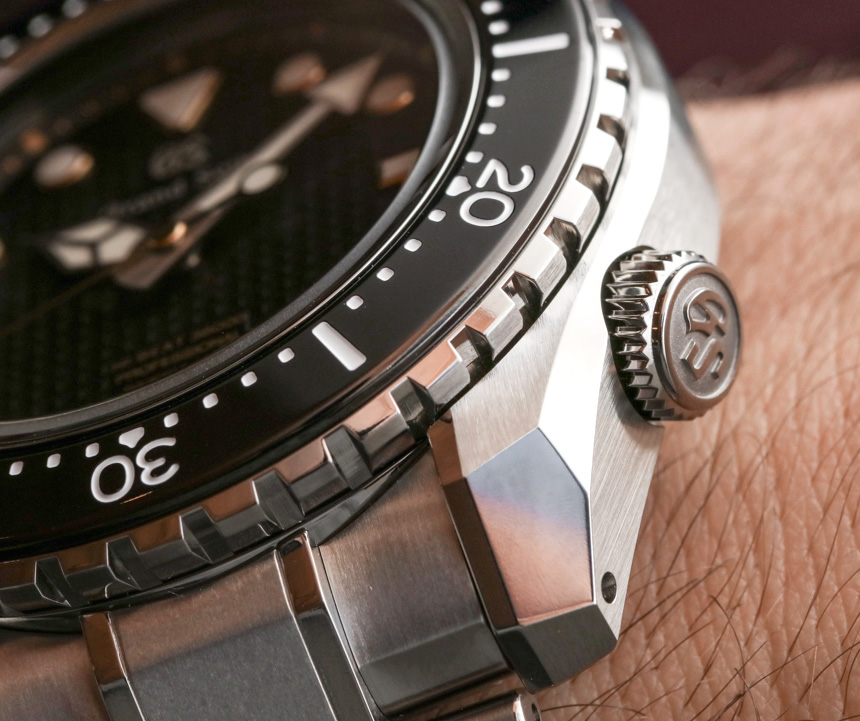 Anyone familiar with the SBEX001 or Grand Seiko’s excellent Spring Drive divers already knows without looking at the official measurements that the Grand Seiko Hi-Beat 36000 Professional 600m Diver’s SBGH255 is going to be a large watch. And it is. Planet-sized even. At a hulking 46.9mm by 17mm thick, it shirks the steadily growing trend of smaller watches and unapologetically goes in the opposite direction. But at the same time, the dimensions don’t overwhelm once it’s on the wrist, unlike the SBEX001, which wore long and tall. The SBGH255 owes its surprisingly comfortable fit to the high-intensity titanium construction which keeps the weight down, and the case’s short, downward-curving lugs which hug the wrist with little overhang. 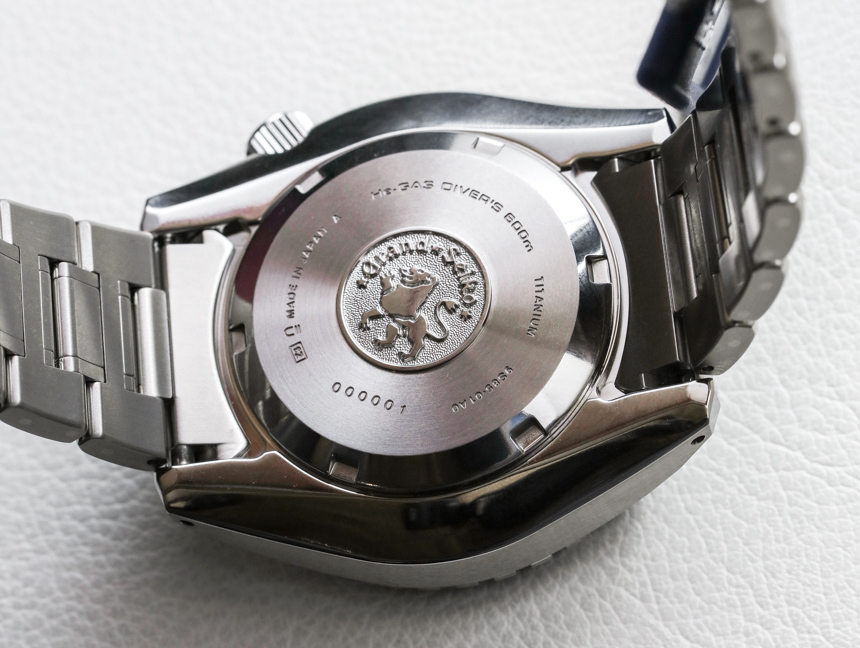 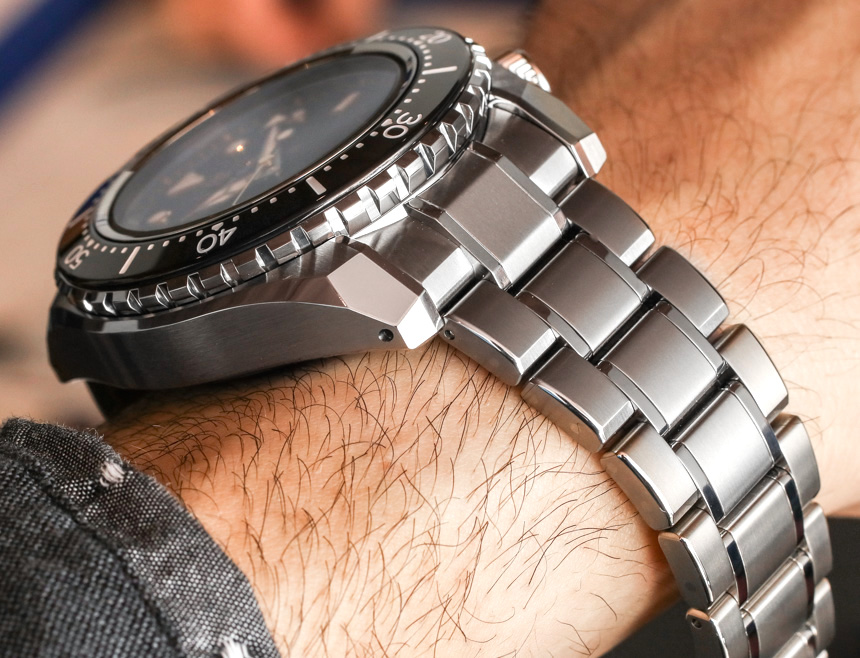 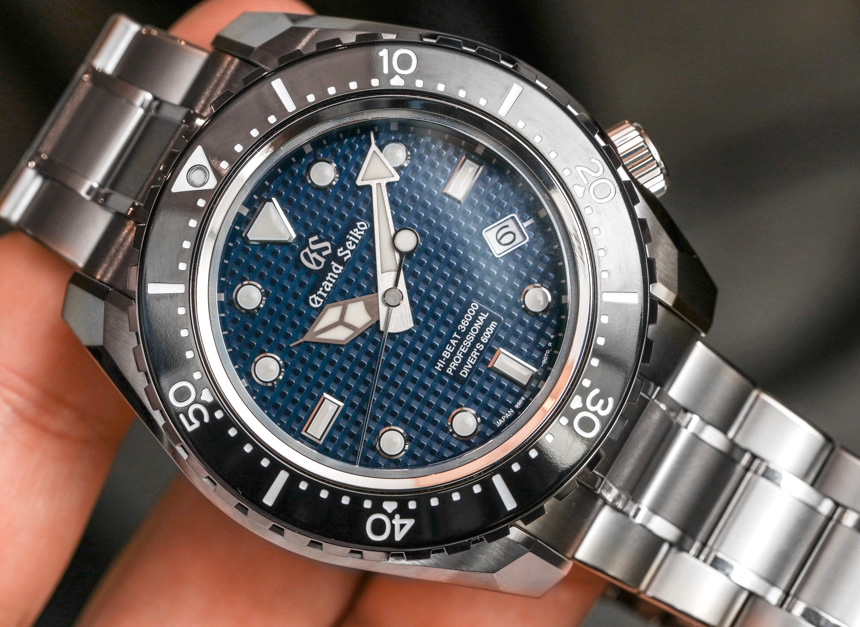 The case work itself is truly top-notch, and every bit deserving of the new Grand Seiko re-badging. Nowhere do we find the traditional flowing curves and lines typical of previous GS divers – instead, we’re treated to a series of sharply contrasting bevels and geometric angles each with their own zaratsu finishes and behavior in the light. The resulting effect is almost polygonal in a sense, yielding a series of opposing facets between the lugs and case body that flow with surprising ease into the bracelet and the grippy, angular teeth found on the bezel. 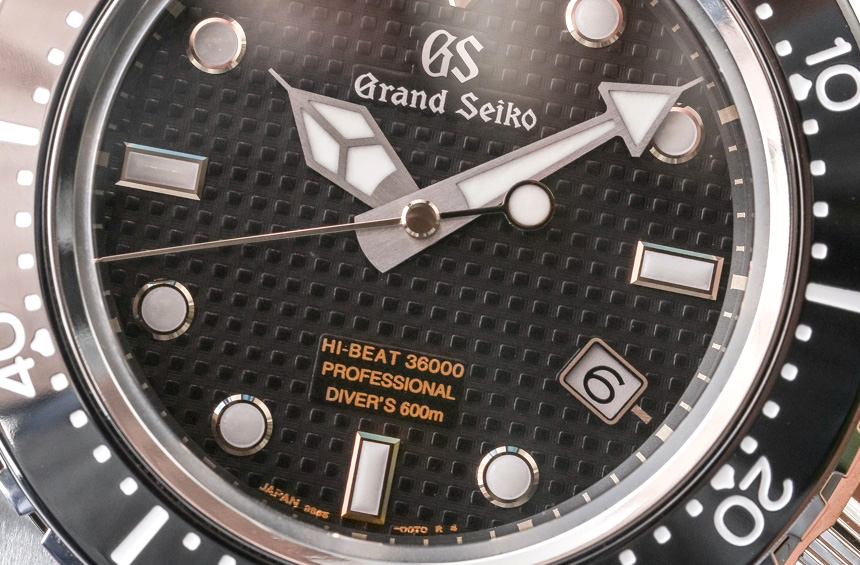 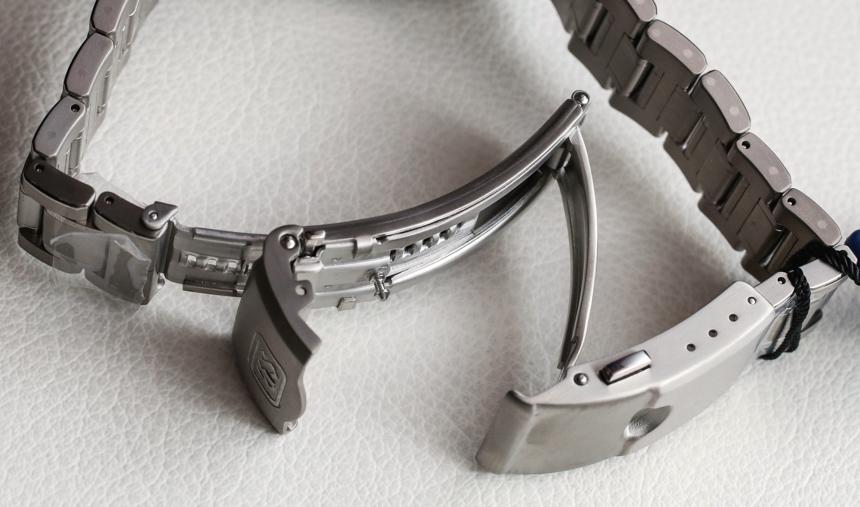 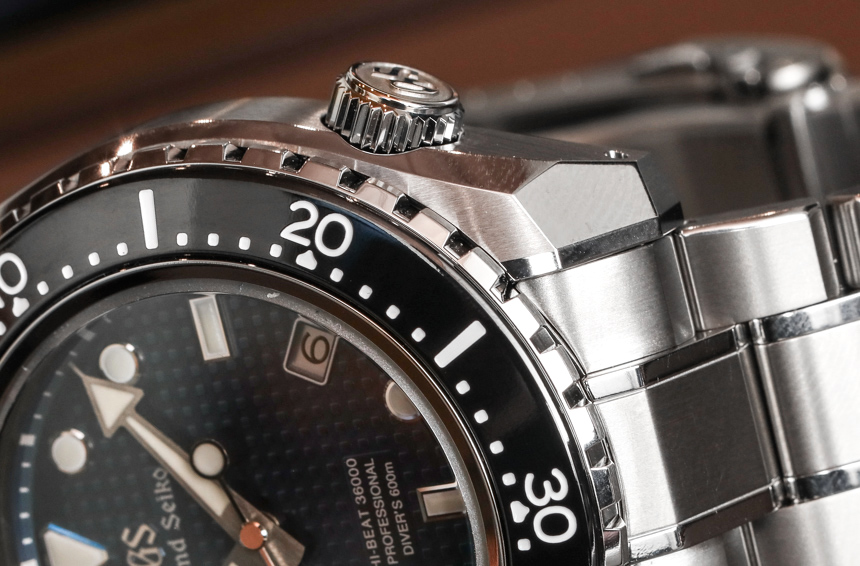 But even for all the interesting case work, the real star of the show on the Grand Seiko Hi-Beat 36000 Professional 600m Diver’s SBGH255 is the dial itself, which is made from pure iron to act as an anti-magnetic shield for the movement beneath. And in the past, while Grand Seiko’s divers have been more visually staid, this one features a tight, waffle-textured dial whose many squared rows and valleys play with the light in a way that reminds us a lot of Audemars Piguet’s Royal Oak tapisserie dials. 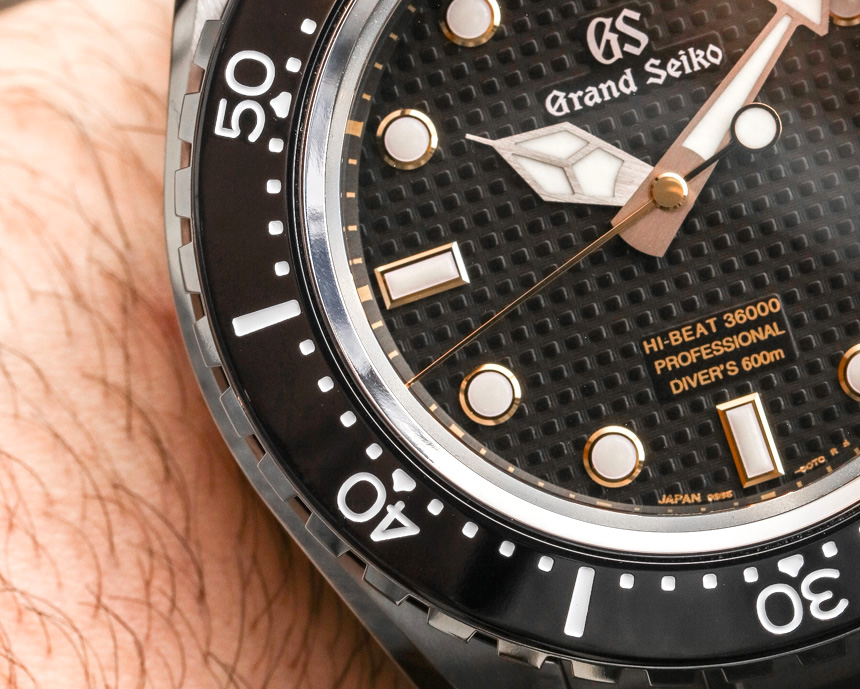 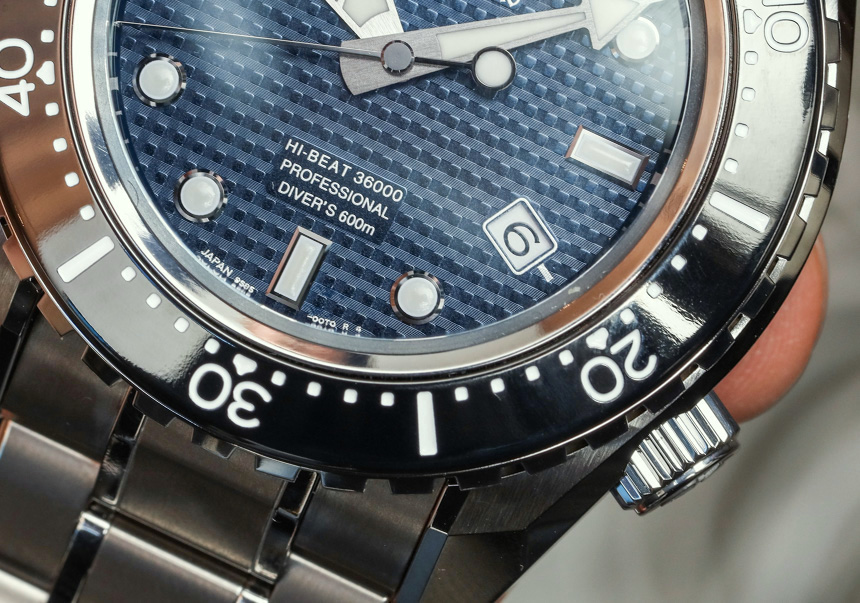 The texture provides a nice contrast to the luminous, mirror-polished indices (which can look black, or a contrasting silver depending on the angle) and cathedral-style handset – both of which are standard-issue to Grand Seiko’s dive collection. What makes this particular offering special though, is that Grand Seiko usually reserves its more interesting dial manufacture for dressier options like the SBGD001. It’s great to see new dial innovations coming to the Divers collection, because even if the resulting pattern isn’t for everyone, it’s a good hint at what Grand Seiko has in store for future dive watches. 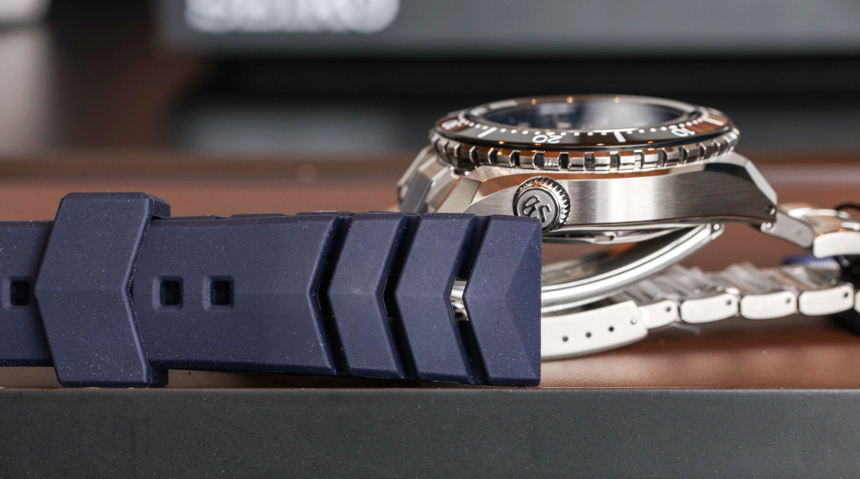 Like the rest of Seiko’s high-end divers, the case is fitted with an L-shaped gasket that precludes the need for a helium release valve, and thus makes the watch suitable even for saturation diving. Inside, hums Seiko’s 9S85 high-beat movement, which is designed, assembled and adjusted at the Shizuku-Ishi Watch Studio, where all Grand Seiko mechanical watches come to life. Oscillating at ten beats per second, this 36,000vph caliber still manages an impressive 55-hour power reserve, and a claimed accuracy of +5 to -3 seconds per day. Grand Seiko’s Spring Drive movement accuracy and mesmerizing perfect sweeping seconds are both well-documented, but getting close to that kind of accuracy while replicating said sweep with a mechanical complication that routinely takes its toll on the longevity of the whole movement is no small feat. 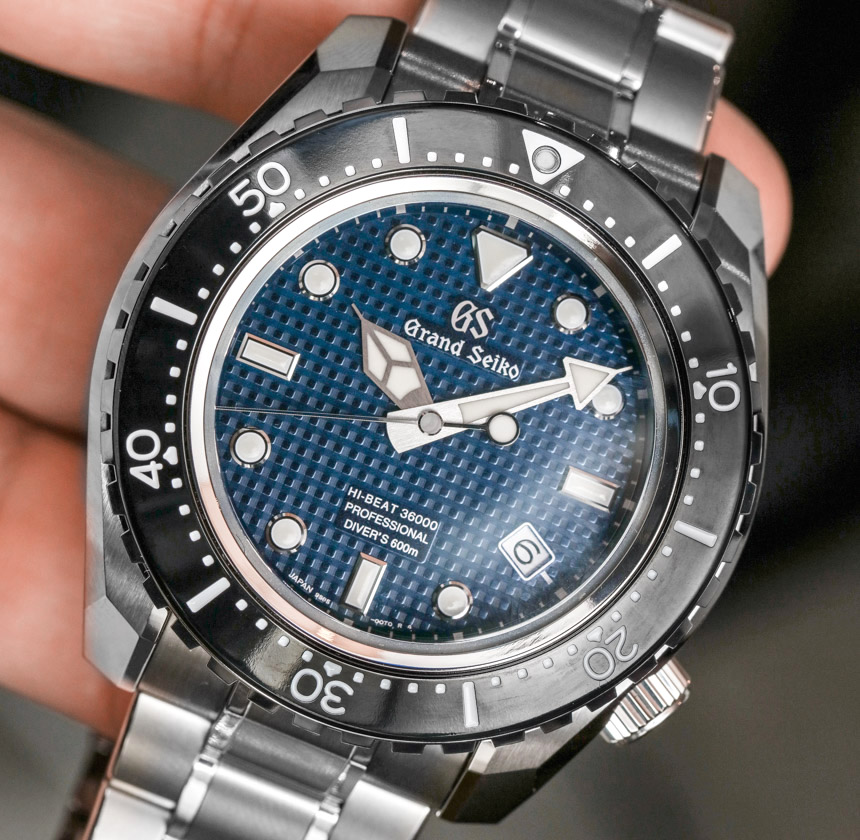 Both the Grand Seiko Hi-Beat 36000 Professional 600m Diver’s SBGH255 and the limited-edition SBGH257 blue edition will be available in August 2017, with a starting price of $9,600 for the standard black dial with gold accents, and $9,800 for the blue dial. grand-seiko.com