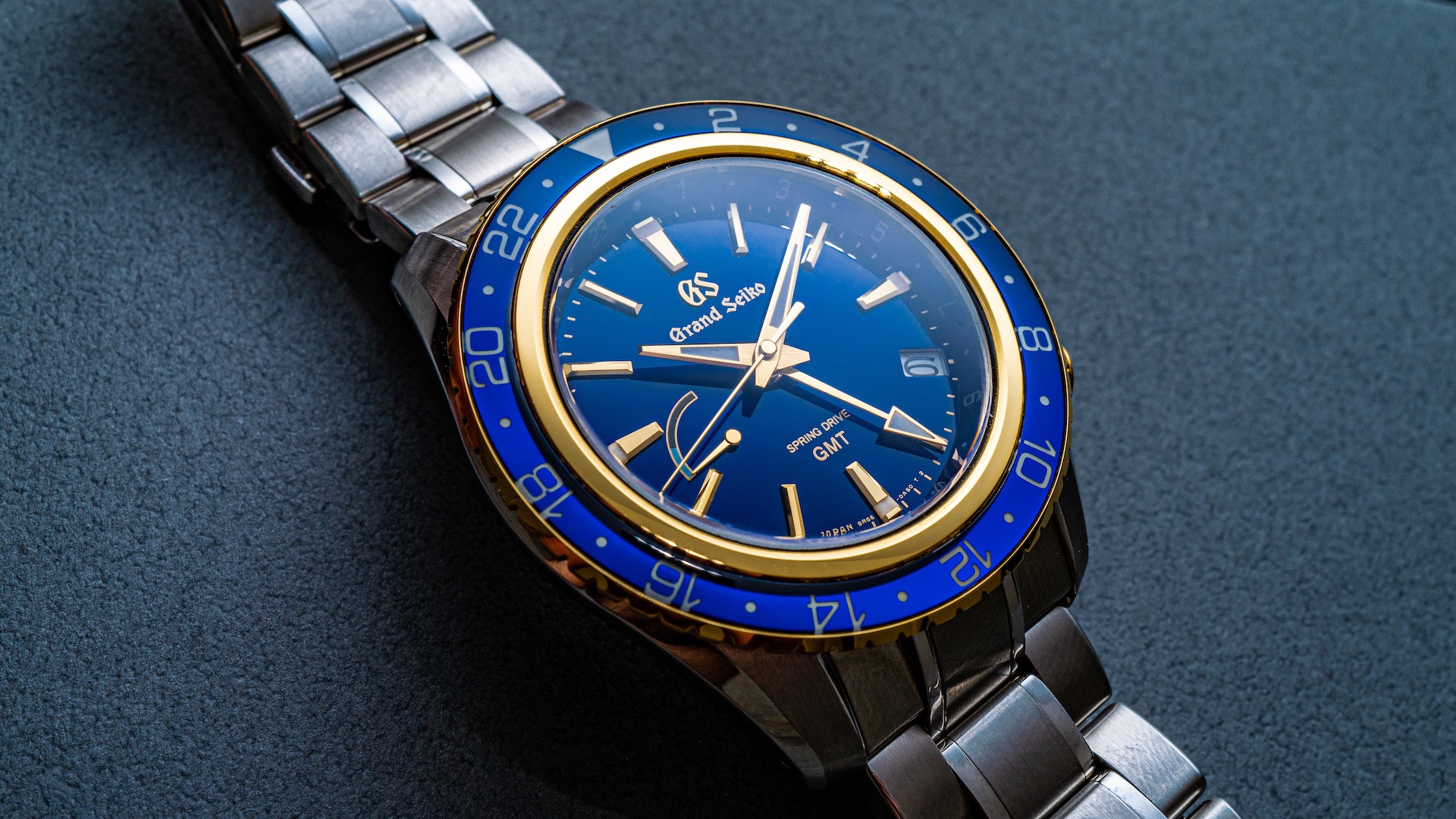 When the Grand Seiko Spring Drive GMT SBGE248 was announced a month ago, I was cautiously enthusiastic about it but reserved final judgment for when I could see it in the metal. That vibrant blue and gold two-tone layout looked great in the press shots, but as we all know, sometimes renderings don’t always translate to the delivered product. Well, I got to spend some time with the SBGE248 last week and, as those of you who follow aBlogtoWatch on Instagram found, it absolutely delivered. Restricting the two-tone scheme to the case and leaving the bracelet in steel is something I want to see more of in the future, and not just from Grand Seiko. It’s the right amount of flair without the old-fashioned feeling a lot of us imagine when we hear “two-tone” watch. One significant thing that I would put on my wish list for a future iteration of the SBGE248? A new bracelet. As much as I like the aesthetic of a two-tone case on an all-steel bracelet, having one identical to those of past models leaves me craving that extra bit of refinement and quality that we get on the dial. 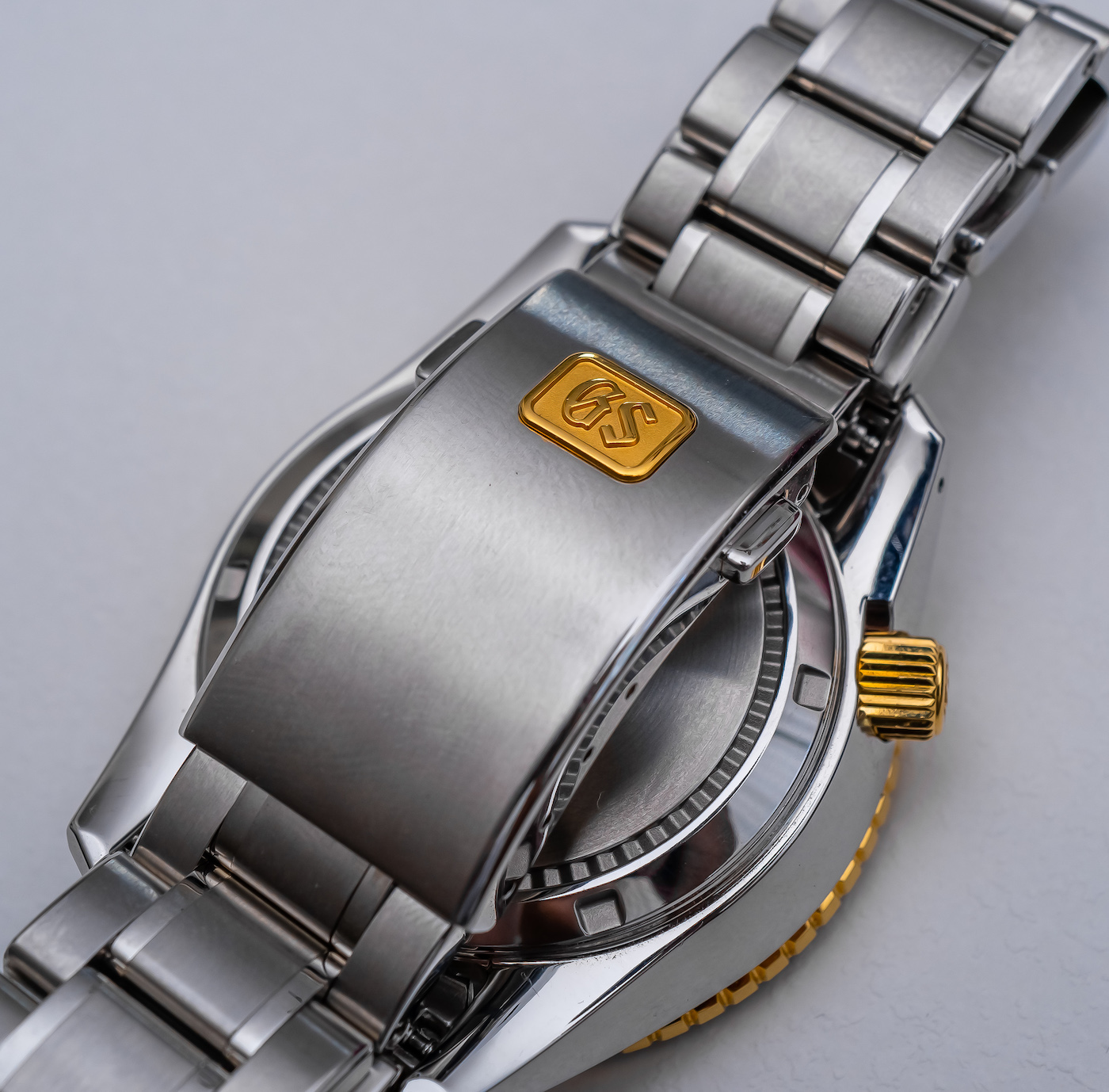 In an article in the New York Times from 2010, Japanese watch collector and former GPHG jury member Dr. Bernard Cheong spoke glowingly of the brand but did long for more design variety. He said, “I think the company will sooner or later begin to make other shapes and designs as foreign customers begin to embrace Grand Seiko,” and this was perfectly accurate. Since Grand Seiko’s emancipation in becoming an autonomous brand in 2017, it has gained ground, especially here in the United States.

The SBGE248 is a perfect realization of this evolution as a relatively mainstream luxury GMT watch that, intentionally or not, seeks to directly capture more of the Western market that has traditionally been dominated by Rolex. That’s neither new nor surprising, but the fact that the SBGE248 attempts to do so without the incentive of a substantially lower price is a bold move by Grand Seiko. 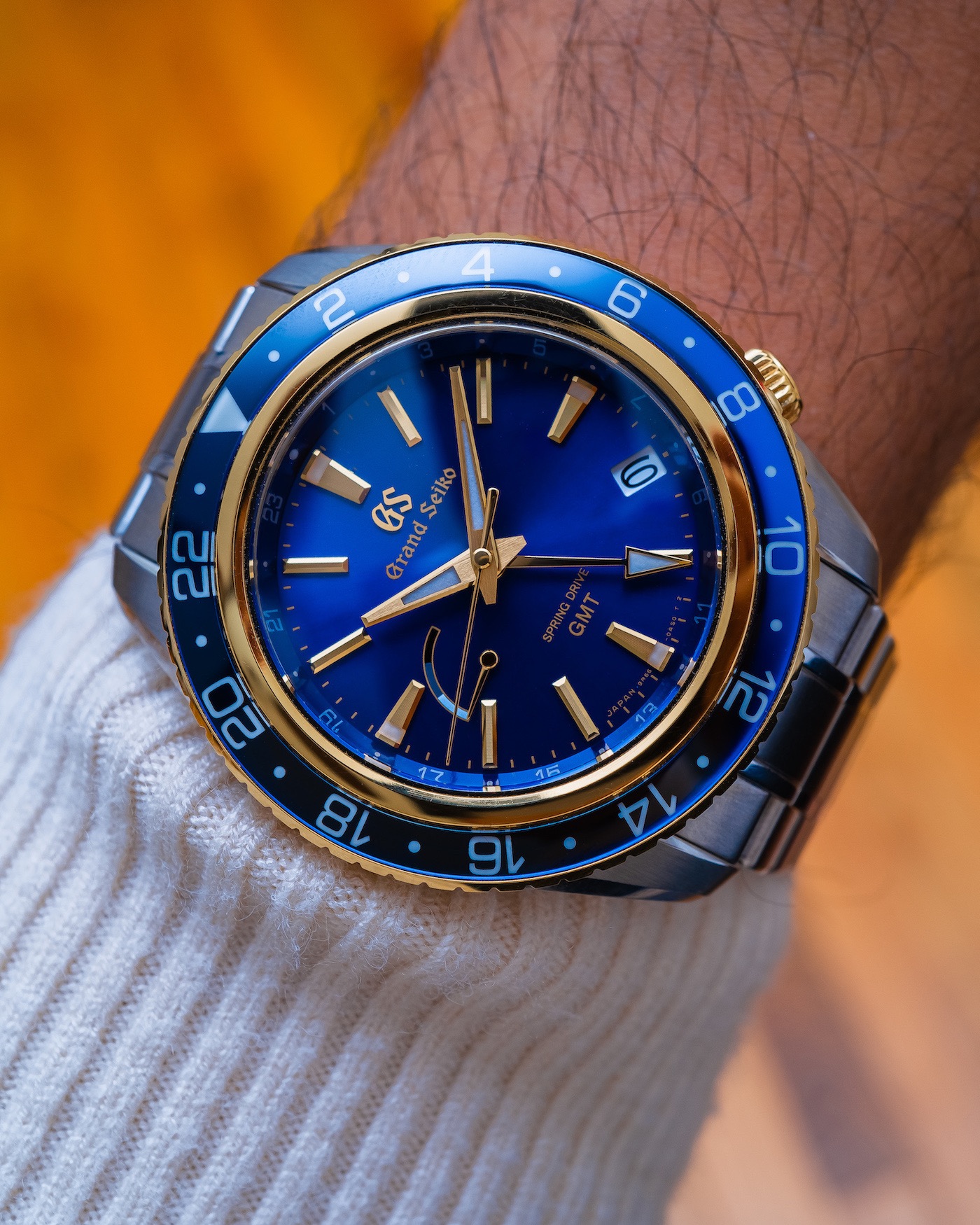 In terms of execution, landing on the perfect shade of blue is probably the single “make or break” design point. The end result is vibrant when in a bright or well-lit environment, but I also found myself almost appreciating it more in a darker setting, where it almost appears to cool down. Ssee the image above to get an idea of what I’m referring to.) I think it’s hard not to look at this watch and think of the Rolex Submariner 116613LB with the two-tone blue and gold case. Personally, this is one of my favorite Rolex models, though I’ve always wished it played with the light in the way the SBGE248 does. In the right lighting and at the right angle (as in the photo above), you can see fleeting zephyrs of subtle royal purple on the SBGE248. The important difference is that this hint of purple isn’t always there, revealing a more sophisticated execution of the color in the Grand Seiko. Not that it’s a comparison — anyone would be lucky to own either of these watches. Almost every luxury (and quasi-luxury) watch brand, at this point, has implemented ceramic bezels on their watches. The Grand Seiko Spring Drive GMT SBGE248, however, has remained that rare piece that has a sapphire crystal insert over a rotating bezel. The sapphire crystal on the bezel allows so much more variation in dark and light shades of blue than the ceramic which stays relatively uniform. This is why the black-bezel version can appear to take on different colors, like a grayish light blue here. 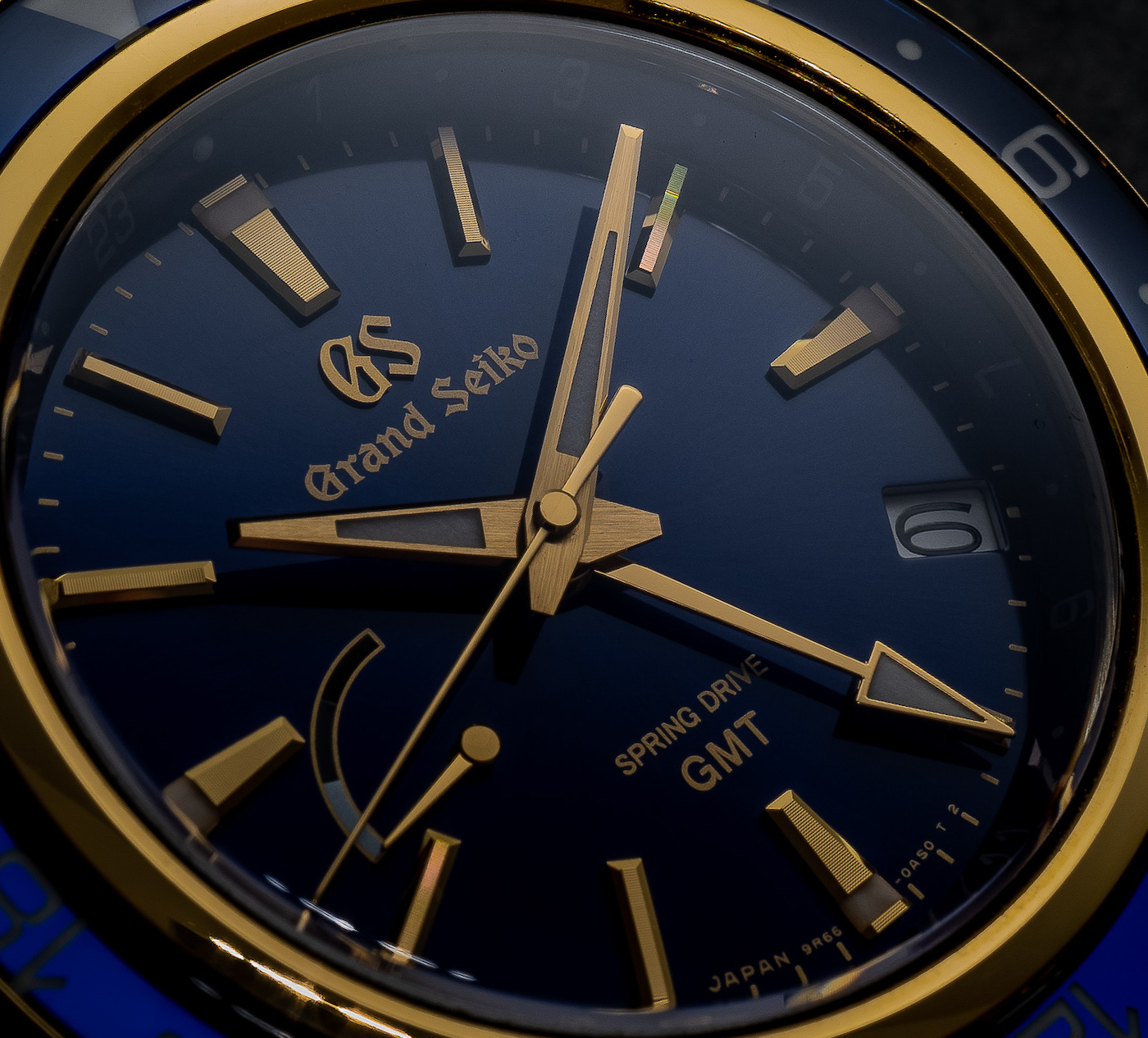 You wouldn’t expect a watch with gold indices and hands to be this legible and glare-proof, but it is. The hands are brushed so as to not be reflective, and this is where Grand Seiko stands out. The gold on blue is stunning, and the interplay between the two here should be an example for other brands. The hour, minute, and GMT hands have lume, as do the hour indices at 12, 3, 6, and 9 o’clock. There’s enough waxing poetic in this article, so I’m going to let my photos do the heavy lifting here. 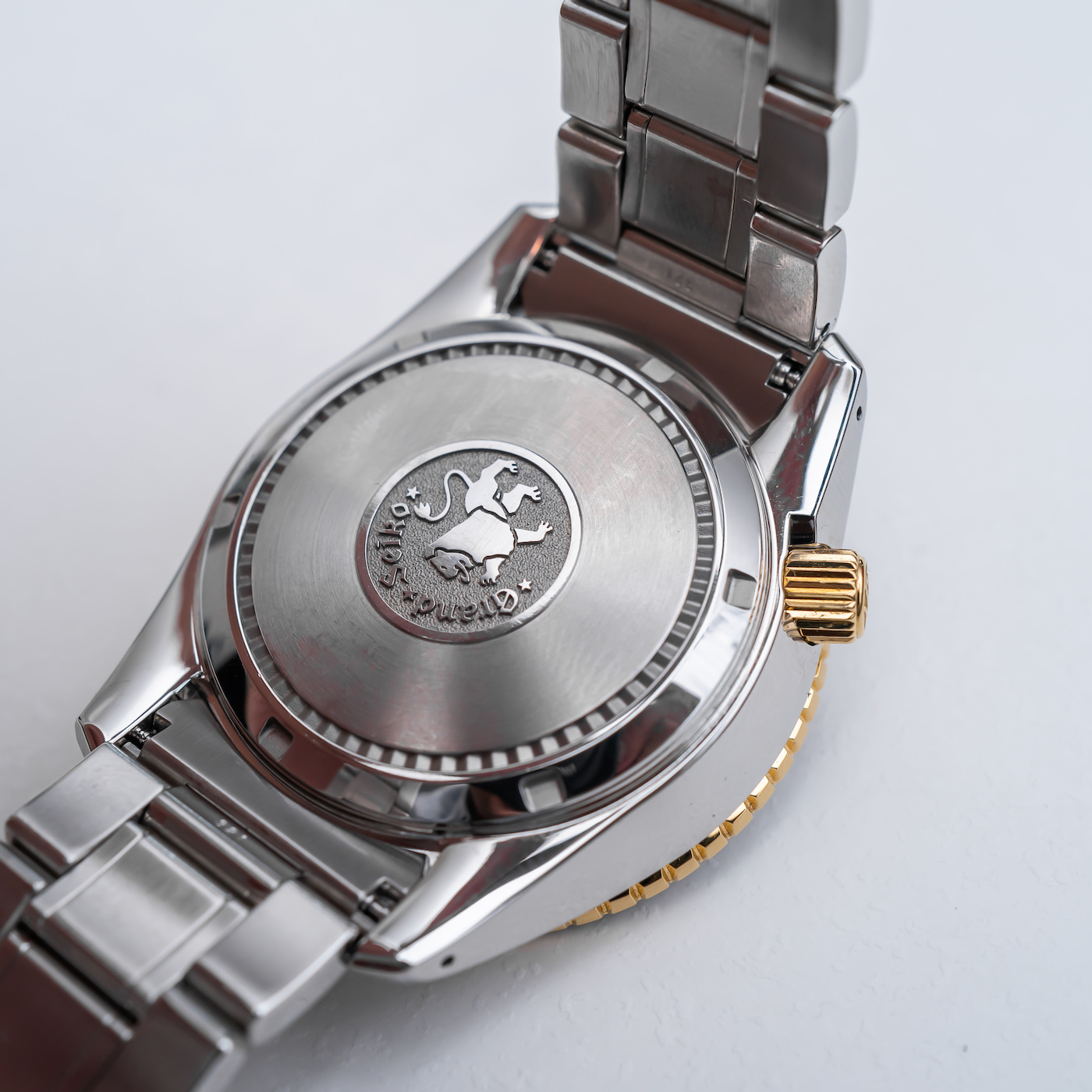 One thing that is a shame is that this wasn’t a working model, so I didn’t get to see that smooth seconds in motion of the 9R66 Spring Drive movement. You can read all about the Spring Drive here, and the caliber 9R66 GMT has a three-day power reserve. Also unchanged is the steel caseback with the Grand Seiko lion engraving, a necessary move considering the 200M water resistance. 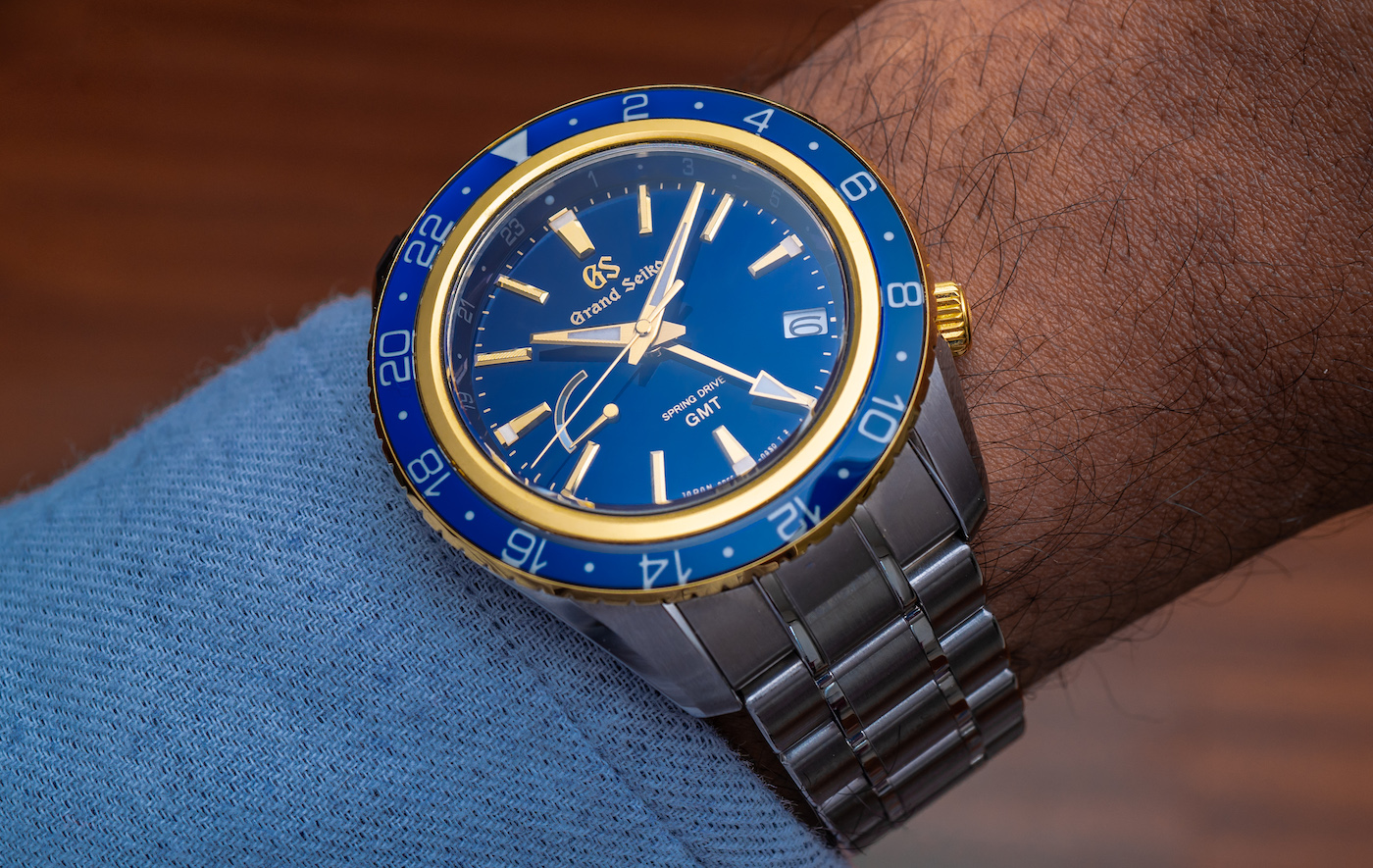 At 44mm-wide and 14.7mm-thick, the SBGE248 is one of the bigger offerings by Grand Seiko, but the curved, short lugs result in a very wearable 50mm lug-to-lug distance. My wrist measures exactly 7.5 inches in circumference, for reference. The use of gold throughout the case is pretty balanced, in my opinion, and it’s not subtle. Though, to clarify, a result of being too “subtle” would be a fail for a vibrant blue and gold watch. I think you’ll have no shortage of opportunities to tell strangers about Grand Seiko, as you’ll get a ton of comments.

I’m sure Grand Seiko knew what it was doing when it designed a watch that’s inherently going to spread word of the brand to markets like Los Angeles, just due to the sheer number of enthusiasts and casual fans who will inquire about it. 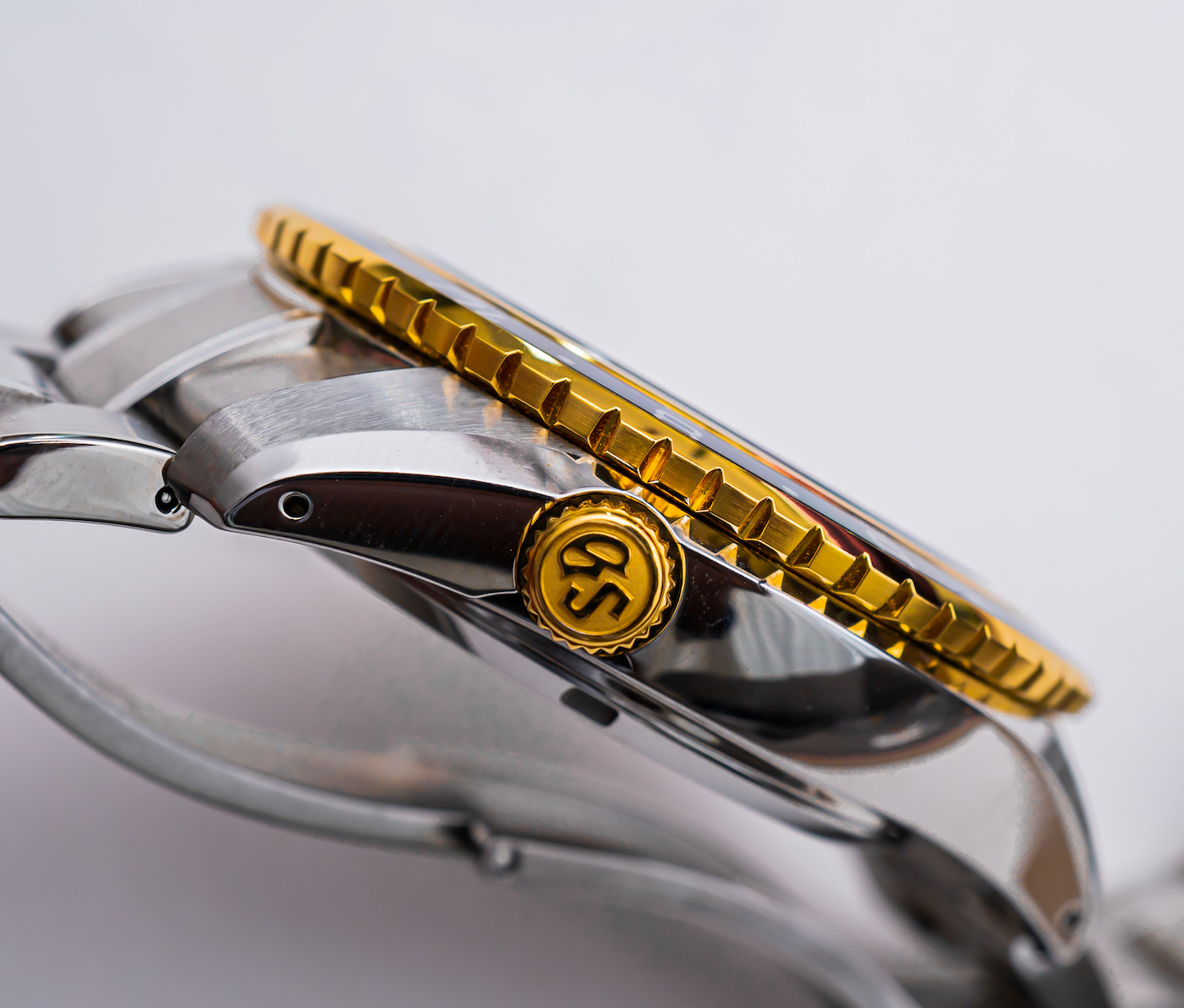 Yes, it’s $11,500. While Grand Seiko still produces models that are incredible values when compared to Swiss counterparts, not all of their watches offer this — nor should they when you consider the products offered. The dial work, hand-finishing, Zaratsu case polishing, and artisans that are unusually specific in their specialty are Grand Seiko’s “pitch” for being a luxury watch brand on par with the usual suspects from Switzerland. Whether they make that sale to the Western market is yet to be decided, but I know that sales in the States are gaining pretty rapidly. 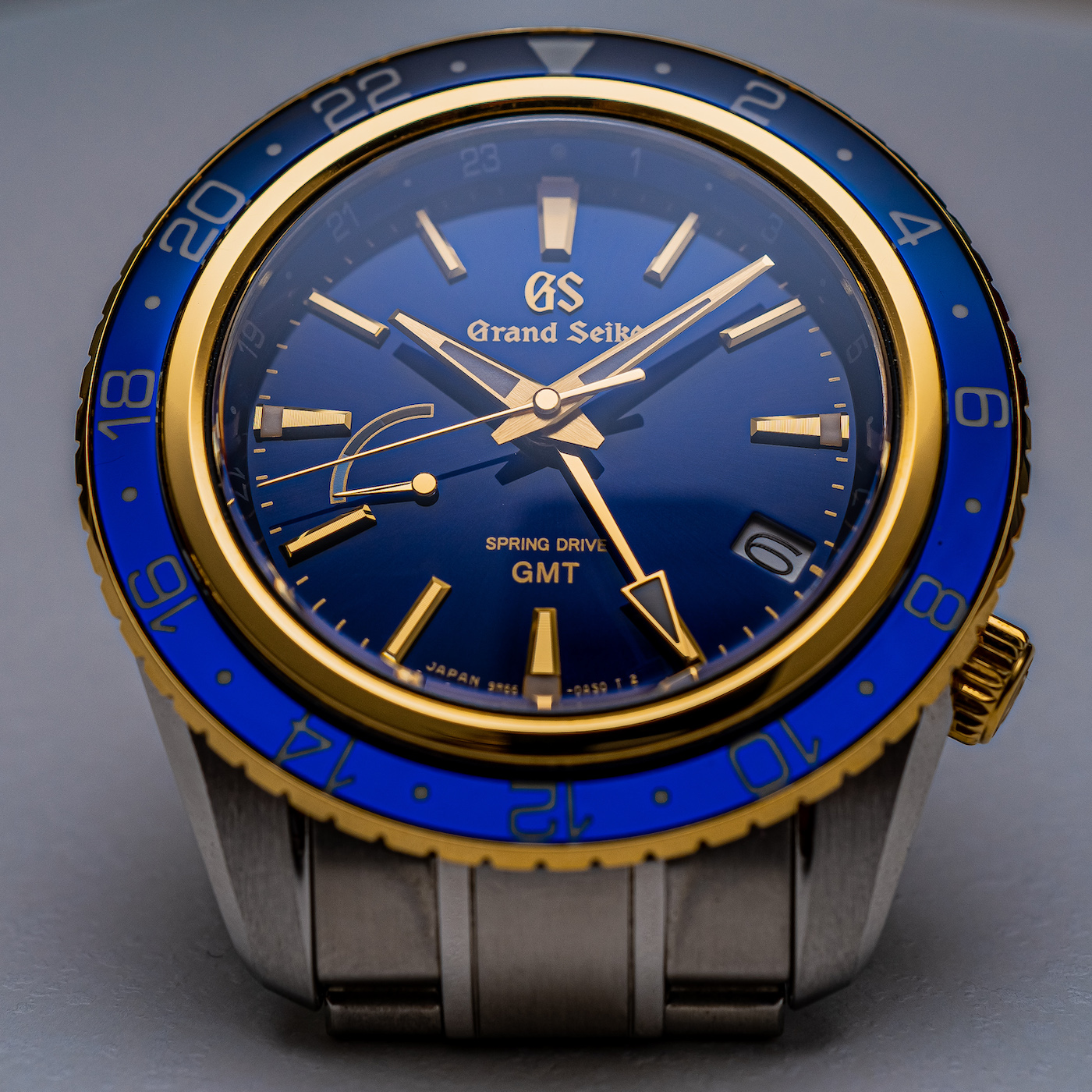 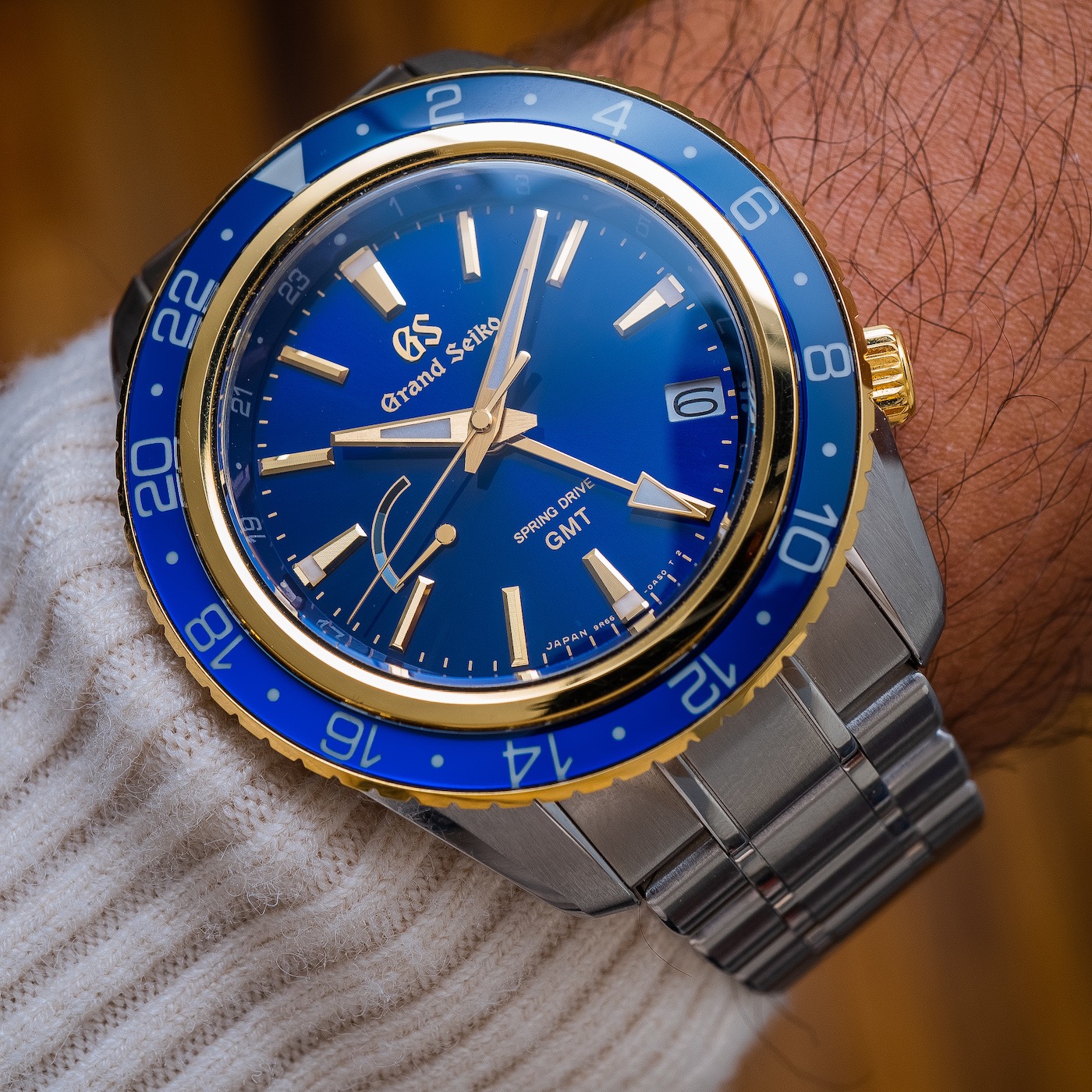 t’s hard for me to avoid an eye-roll when it comes to the theory that Japanese luxury products need to undercut European competitors. Come on. Seriously. It’s 2019, and fashion brands/designers like Issey Miyake, visvim, Yohji Yamamoto, Comme des Garçons, Junya Watanabe, LVMH-owned Kenzo — and I could go on and on — are as close to household names as high-end fashion gets, and not one of them is going to cost you any less than a European designer’s brand. Japanese whisk(e)y like Suntory’s Yamakazi and Hibiki lines have been well regarded worldwide (thanks, in large part, to Lost in Translation), but some of the substantially pricier brown stuff from distilleries like Ichiro Akuto is world-class. Michelin three-star restaurants like Masa and The Araki sit as natural peers of Eleven Madison Park, Le Bernardin, and The French Laundry. I could go on.

So, mini-rant aside, the Grand Seiko Spring Drive GMT SBGE248 is going to be available sometime in September. Again, it’s priced at $11,500. You can learn more at grand-seiko.com.