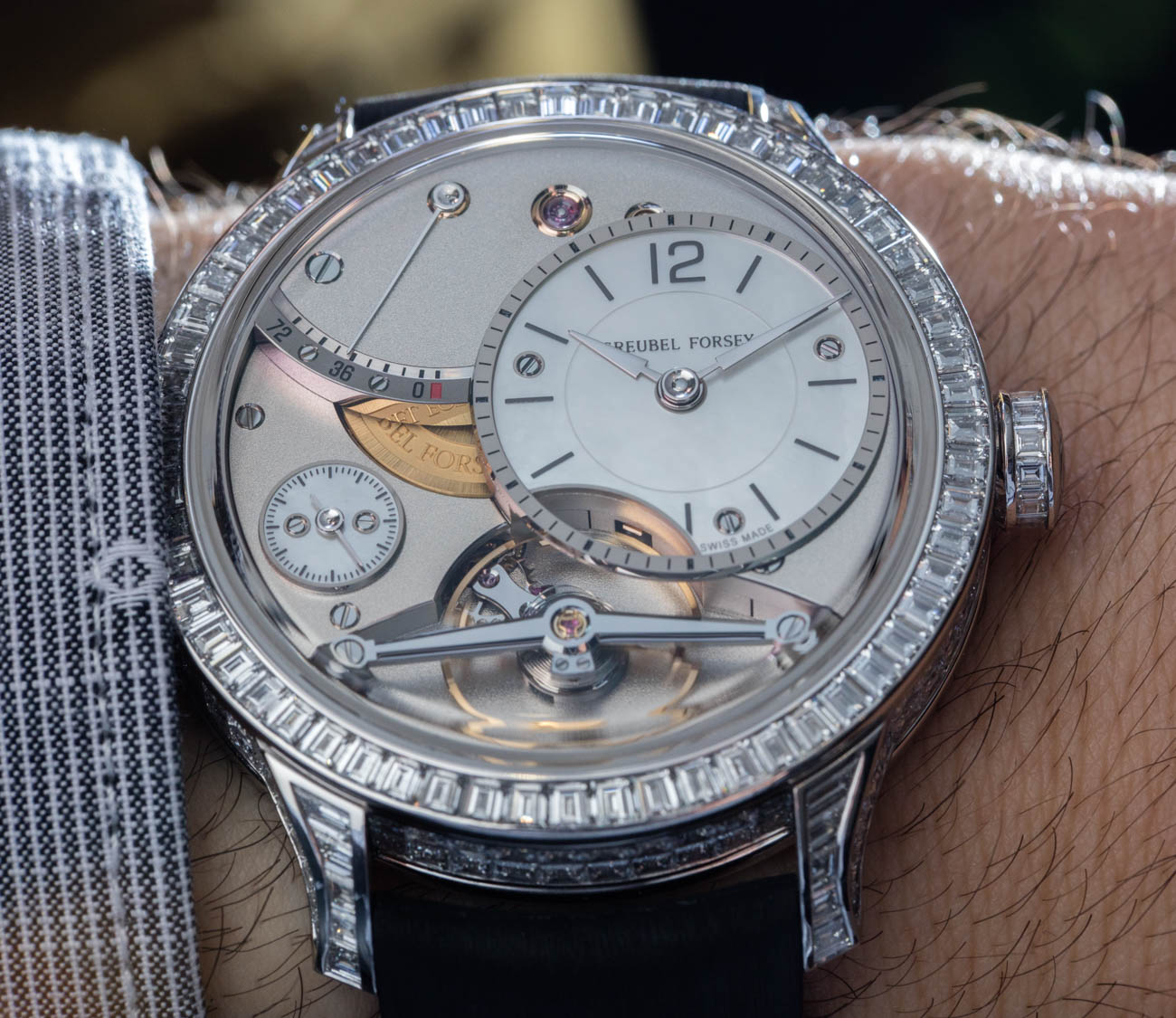 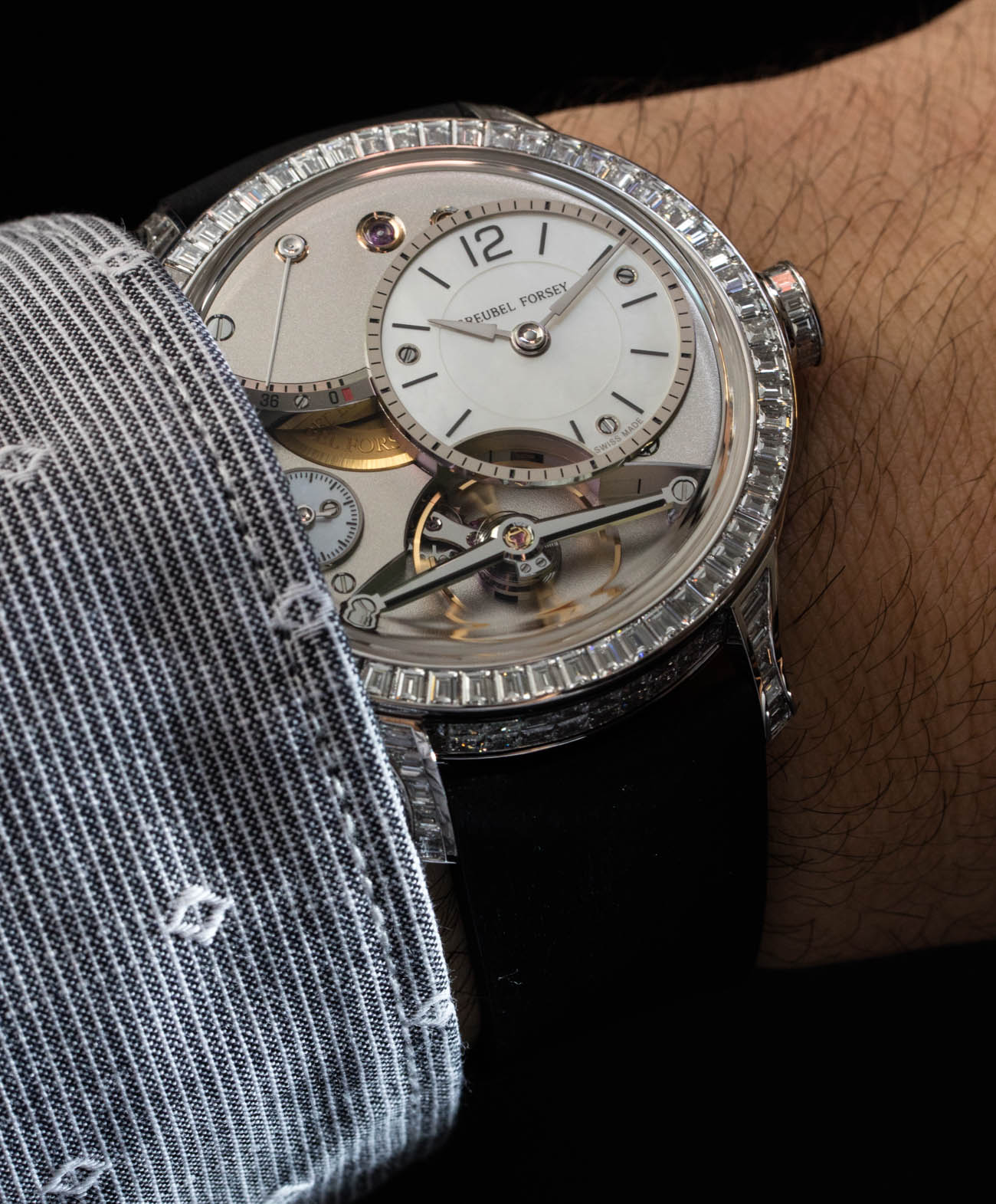 At SIHH 2019, ultra-high-end Swiss watchmaker Greubel Forsey released a rare timepiece (for their brand) set with diamonds. Stephen Forsey tells aBlogtoWatch that the Diamond Set Balancier Contemporain was technically imagined as a women’s product, but for those guys (like me) who enjoy some diamonds and mother-of-pearl luster on their watches, it could serve a dude just as well as a gal.

From a technical standpoint, the Greubel Forsey Balancier Contemporain is among the brand’s simplest watches — although this timepiece is hardly budget-priced. That is especially true for the Diamond Set Balancier Contemporain model, with its 464 baguette-cut IF/D-E quality stones. That is roughly 18.9 carats total. The diamonds line the bezel, lugs, and crown, as well as the strap buckle. Attached to this particular piece is a satin strap — which, for a man, would probably look better as glossy alligator, or something similar that would match the luster of the case. 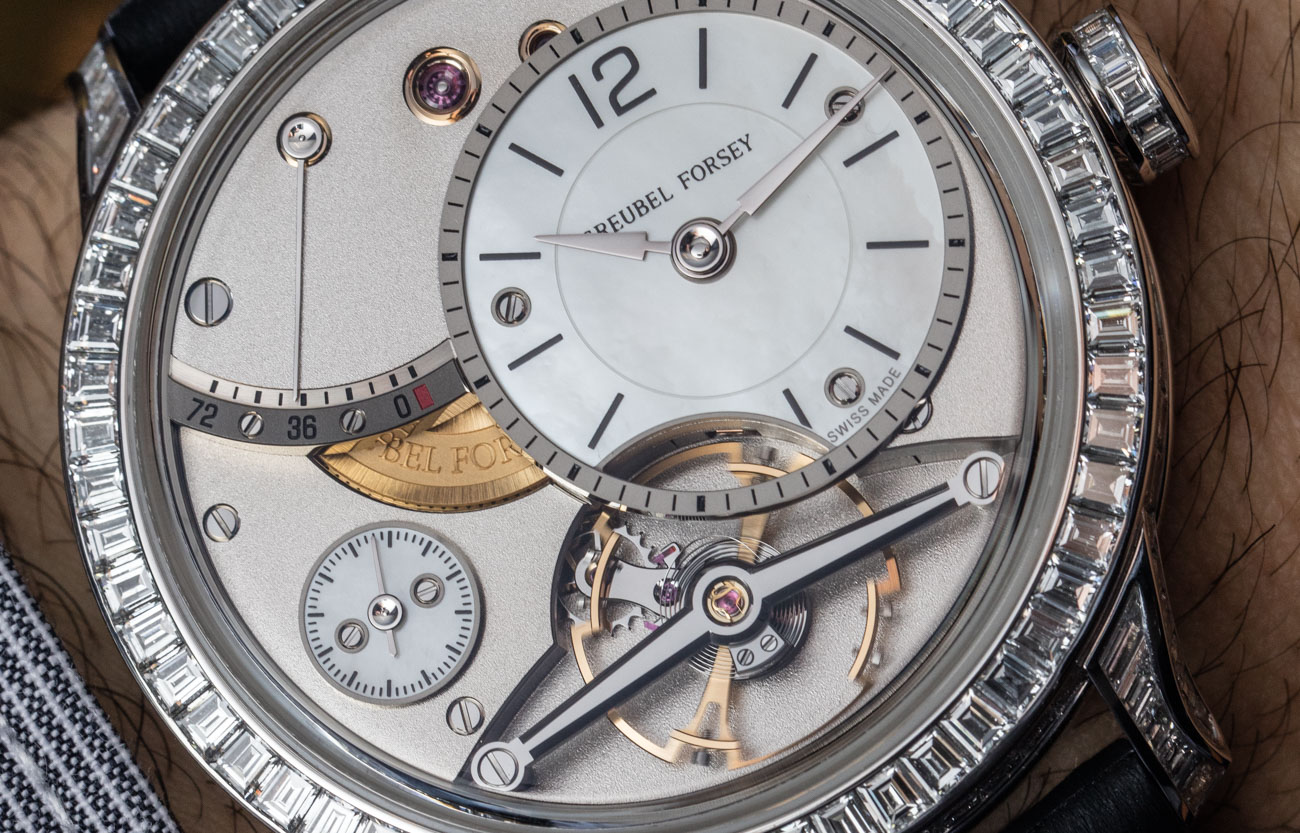 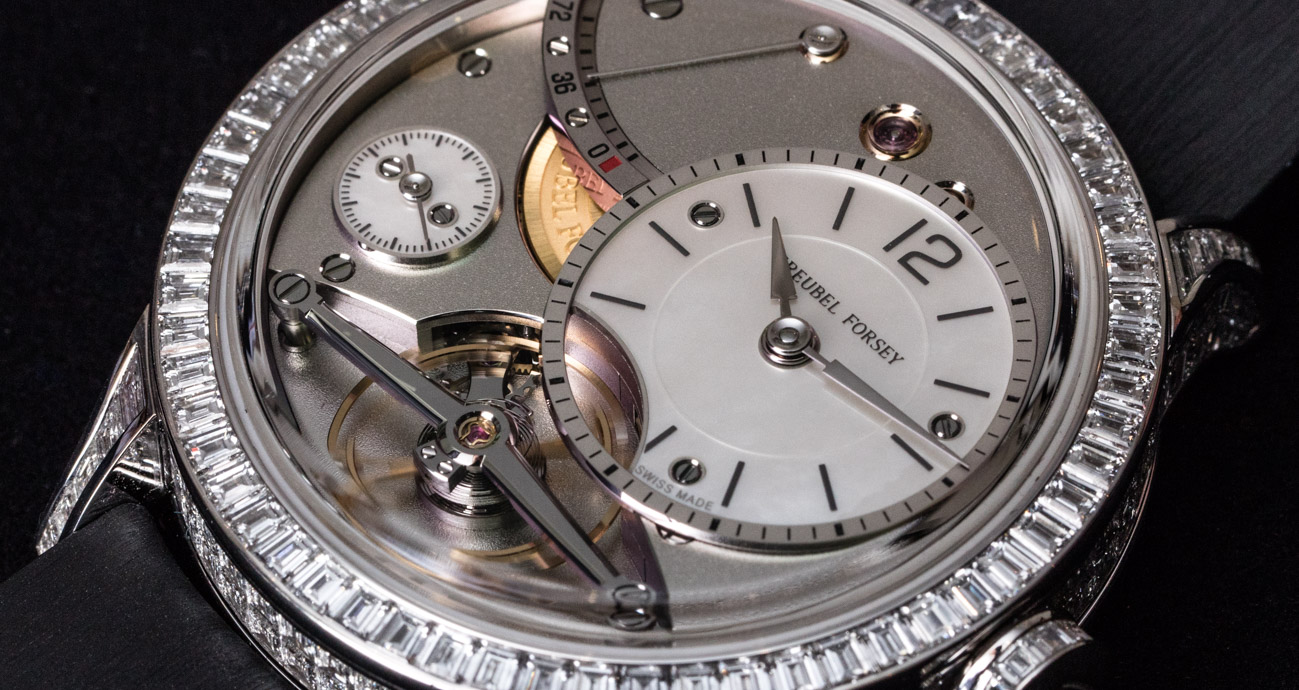 Greubel Forsey uses very high-quality pieces of mother-of-pearl for both the subsidiary second dial and the eccentric dial for the hours and minutes. The latter uses two pieces, given that the inner dial is slightly inset. The round case, itself, is in 18k gold and sized at 41.6mm-wide and 12.25mm-thick. For me that’s easily men’s sized, especially for a dress watch. (Though recall that, despite their relatively classic theme when it comes to design and decoration, the majority of Greubel Forsey timepieces are larger than the Balancier Contemporain’s just under 42mm-wide case.)

The diamond decoration on the face is contrasted with the relatively sober look of frost-finished metal surfaces for much of the dial (which is basically just a view of the movement). The most interesting part of the Balancier Contemporain’s dial is the overlapping circle aesthetic, which is both asymmetrical and yet seemingly balanced. The interesting design selectively exposes parts of the movement, while hiding others, in a way that I find fascinating. For example, the lower edge of the dial for the time is skeletonized to offer a more complete view of the balance wheel, and yet the design doesn’t just entirely cut off the dial by retaining the hour/minute track ring. 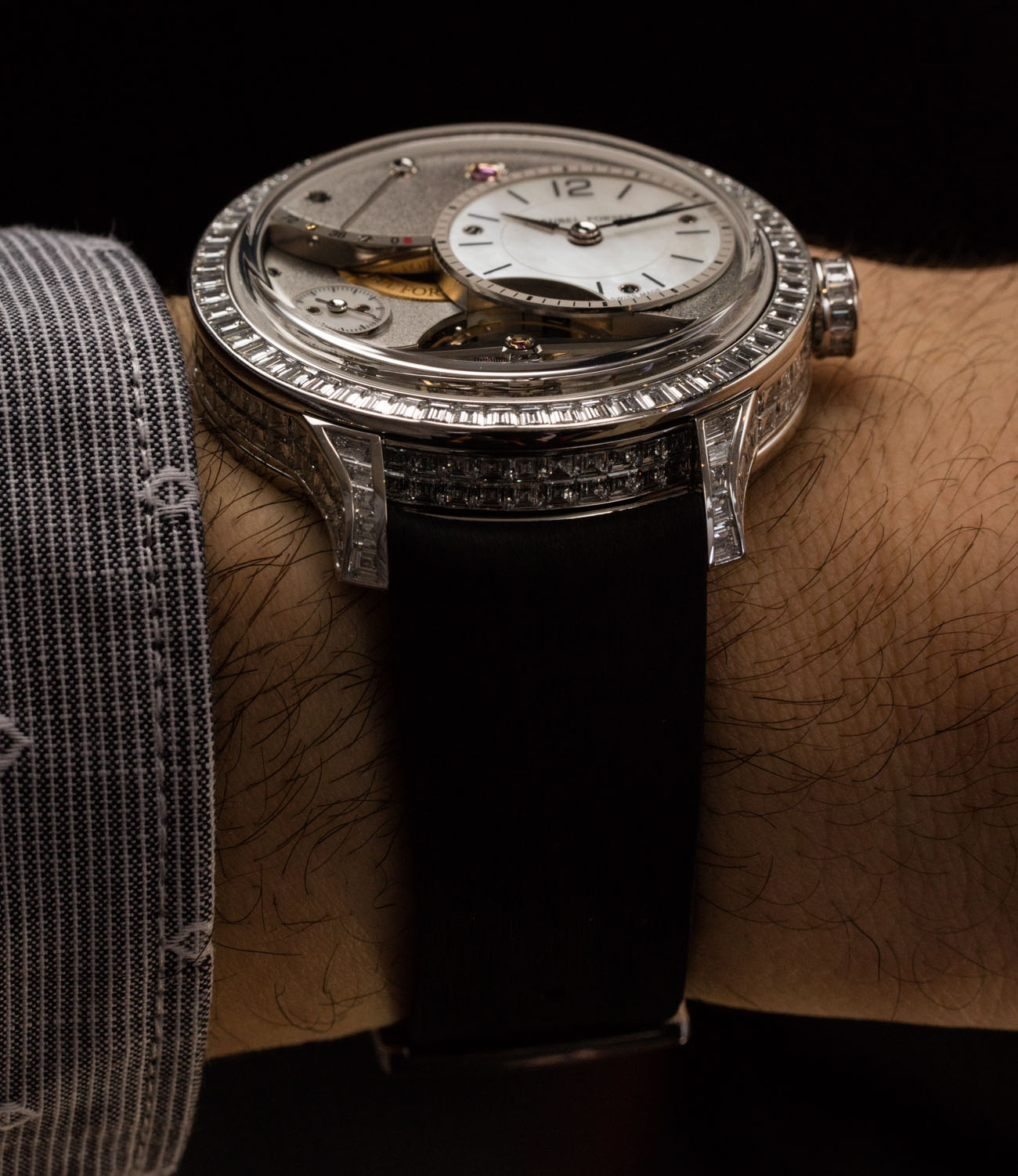 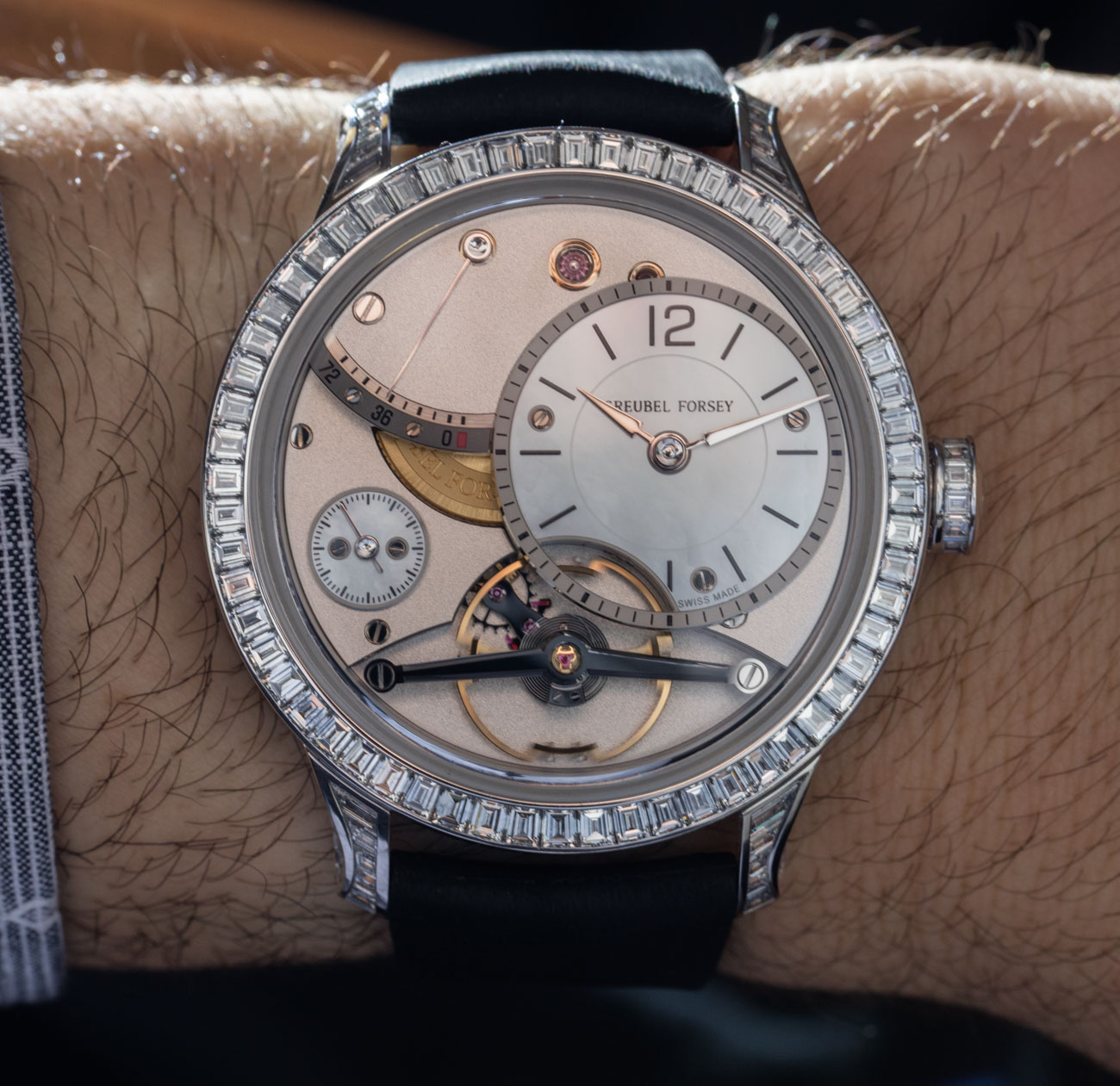 Between the dial for the time and the power reserve indicator, one can see the mainspring barrel peeking through the three-dimensional dial layers. Reading the time isn’t as clear as on a sports watch, but the legibility is solid, given the circumstances. I have always admired how, even on their most ambitious watches, Greubel Forsey never seems to forget that what they are designing is, first and foremost, an instrument to tell the time.

Without any special balance wheel tricks (no tourbillon or anything inclined) the Balancier Contemporain is about as dead simple a watch as Greubel Forsey makes, second only to the even simpler (no power reserve) Greubel Forsey Signature 1 collection. All Greubel Forsey watches nevertheless have the same high level of movement-surface finishing and decoration, no matter how complicated they are. What you really get for these prices is impeccable attention to detail and finishing perfection that stands up to scrutiny under magnification. I’m not saying that a careful eye with a magnifying glass will never spot a tiny error or spec on a Greubel Forsey watch, but they are extremely rare compared to most other watches, even at this price level. The brand can still tout this refined level of near-perfection as something no other brand of this style can offer. 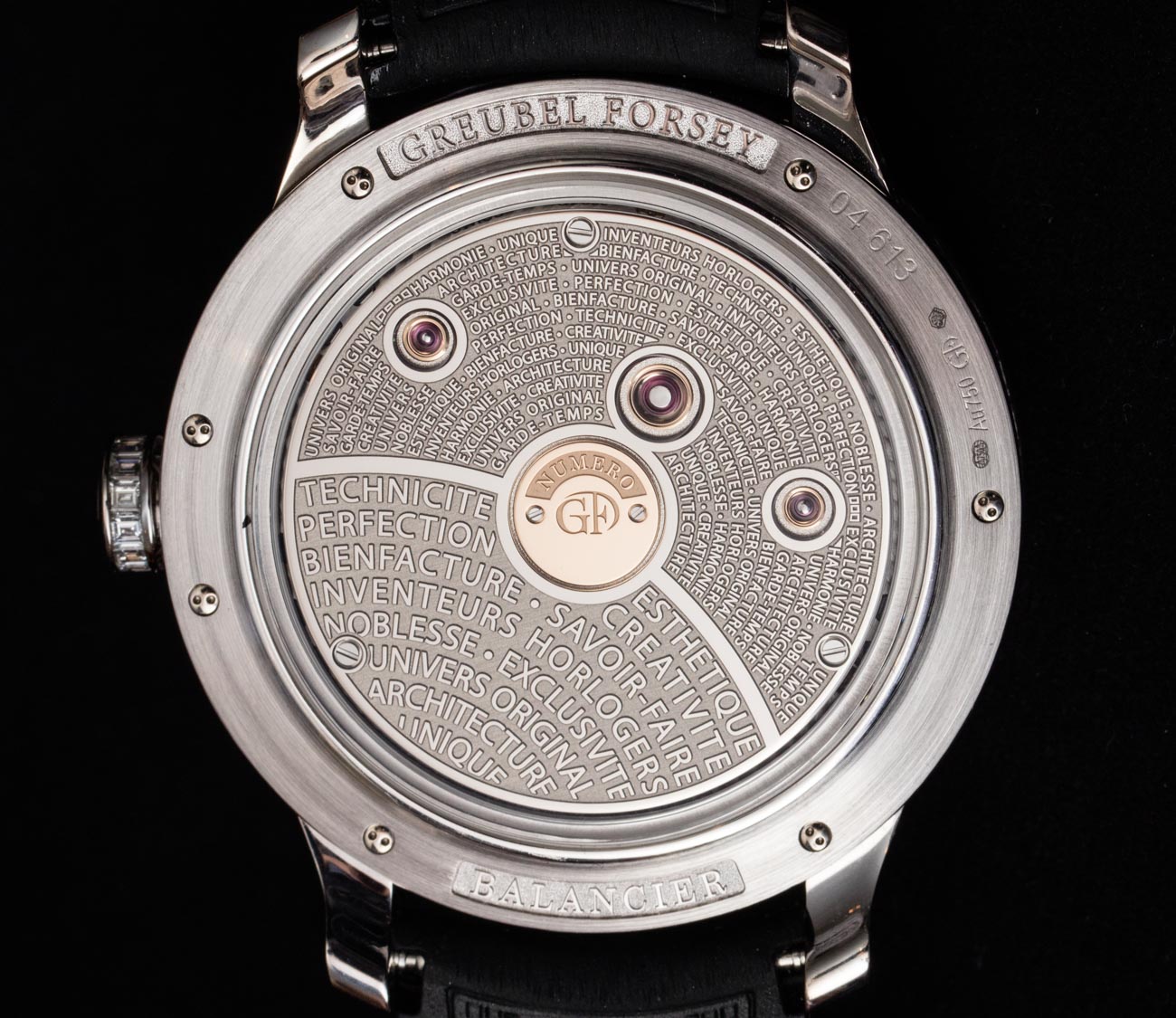 The in-house-made Greubel Forsey movement powering the Diamond Set Balancier Contemporain operates at 3Hz (21,600 bph) with 72 hours of power reserve. Dial indicators include the time with a subsidiary seconds dial and, of course, the large-sized power reserve indicator hand, which does, in fact, help balance out the larger dial. Manually wound, the rear of the movement is really the opposite side of the movement baseplate, and it more or less only contains a series of terms by the brand — similar to statements you can find engraved into other Greubel Forsey timepieces. I found the design of the balance wheel bridge (and its polishing job) to be a particularly attractive and architectural-looking element on the dial.