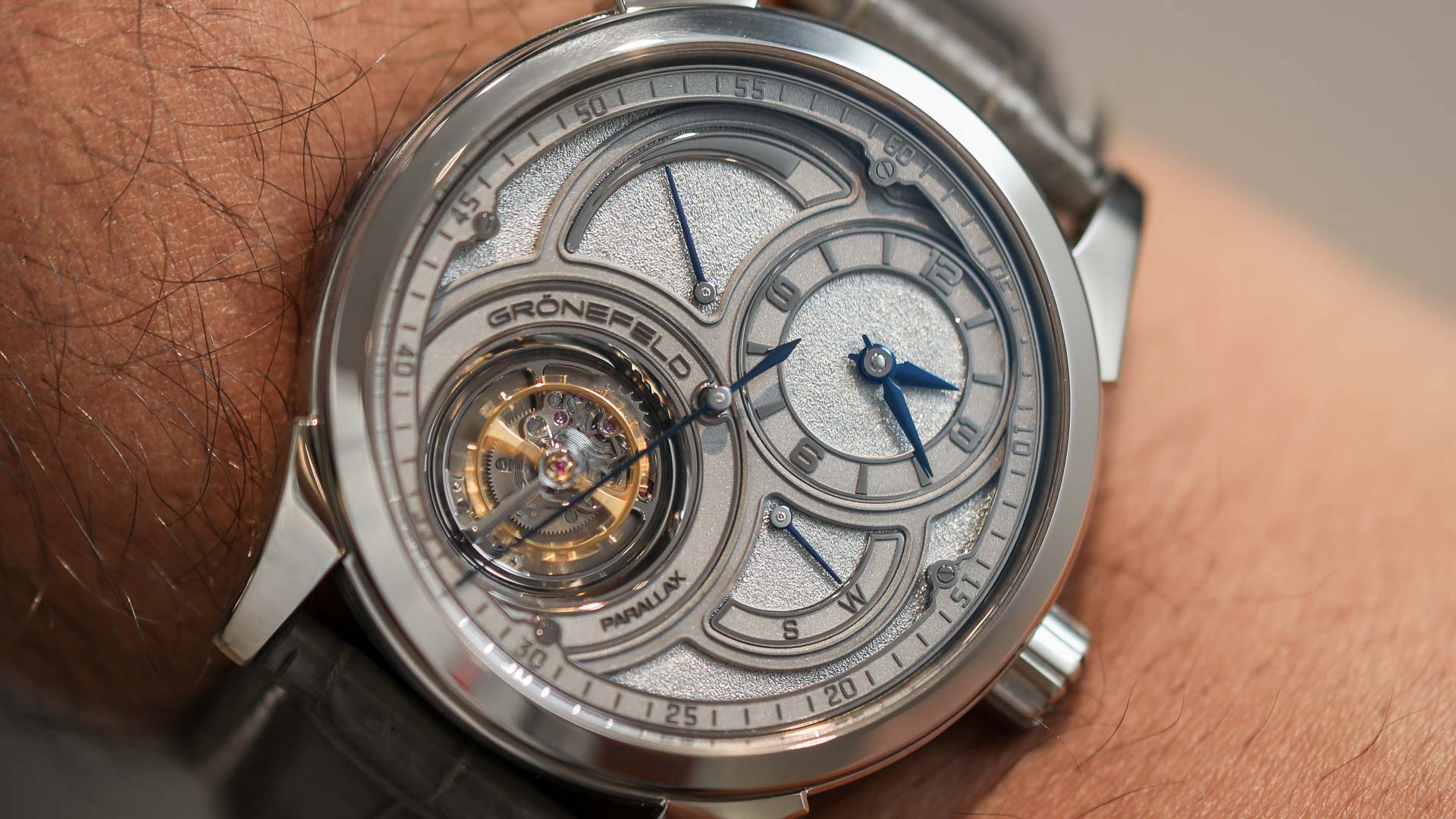 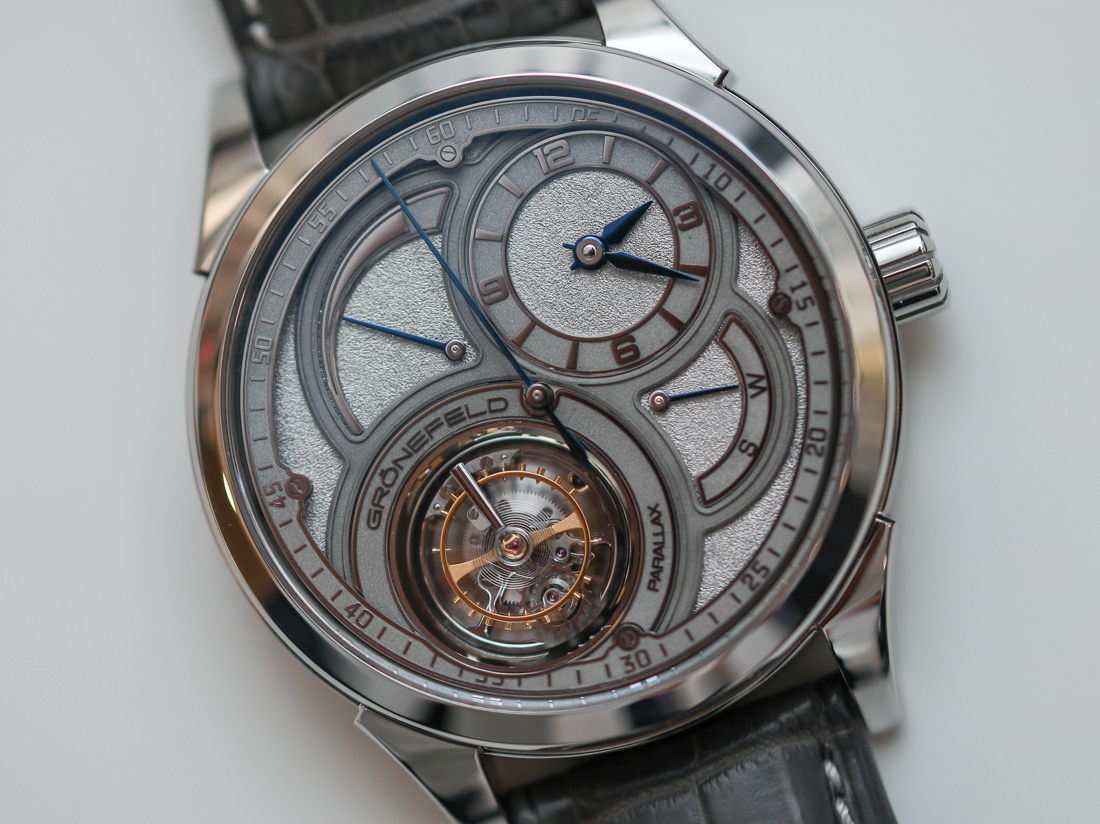 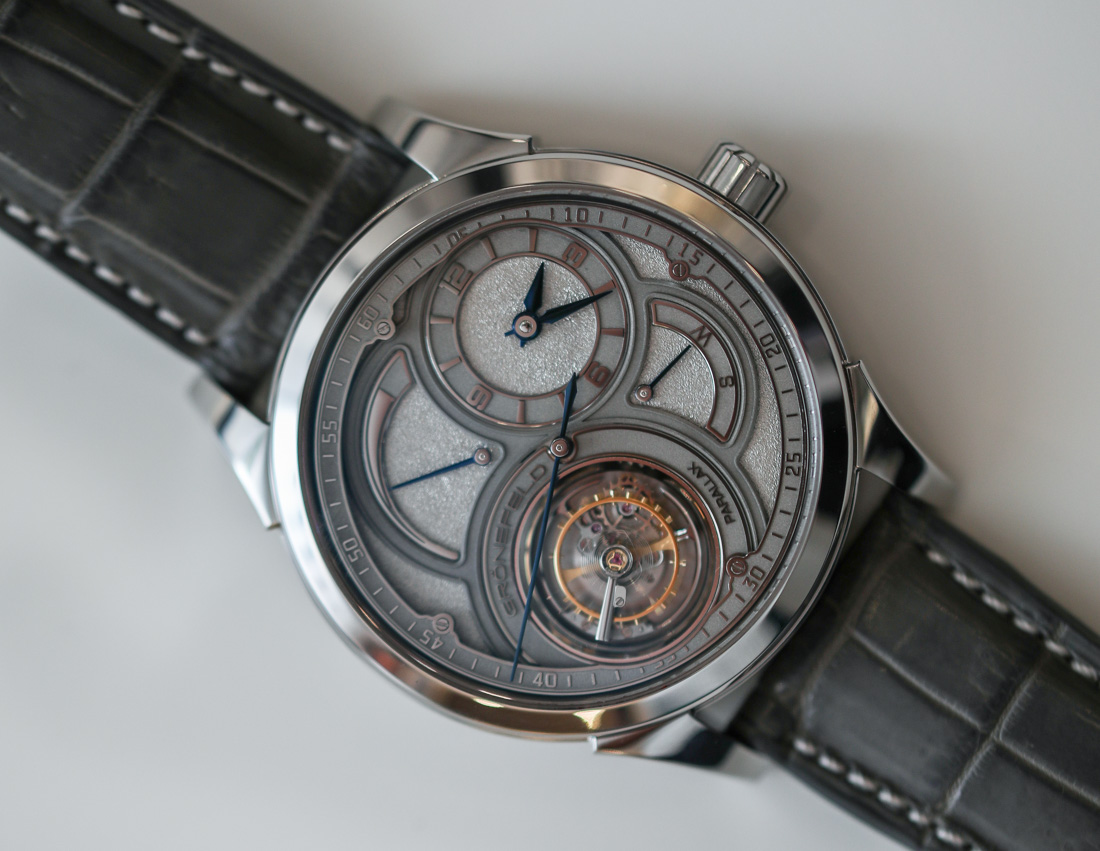 Grönefeld was started by Tim and Bart Grönefeld, two brothers who were born into a family of watchmakers. Prior to starting Grönefeld, the brothers worked at the famous Renaud et Papi manufacture. It was there that the brothers mastered and honed their craft. The Parallax Tourbillon is actually their second tourbillon watch. The first was the GTM-06 from nine years ago. The Parallax Tourbillon was released in two versions; one in red gold and another in stainless steel. You might think that that the stainless steel model is substantially cheaper and you would be wrong. It is cheaper, but not by a lot. The more curious thing is that the stainless steel version is produced in even smaller numbers than the red gold model, which makes it rarer and more exclusive. 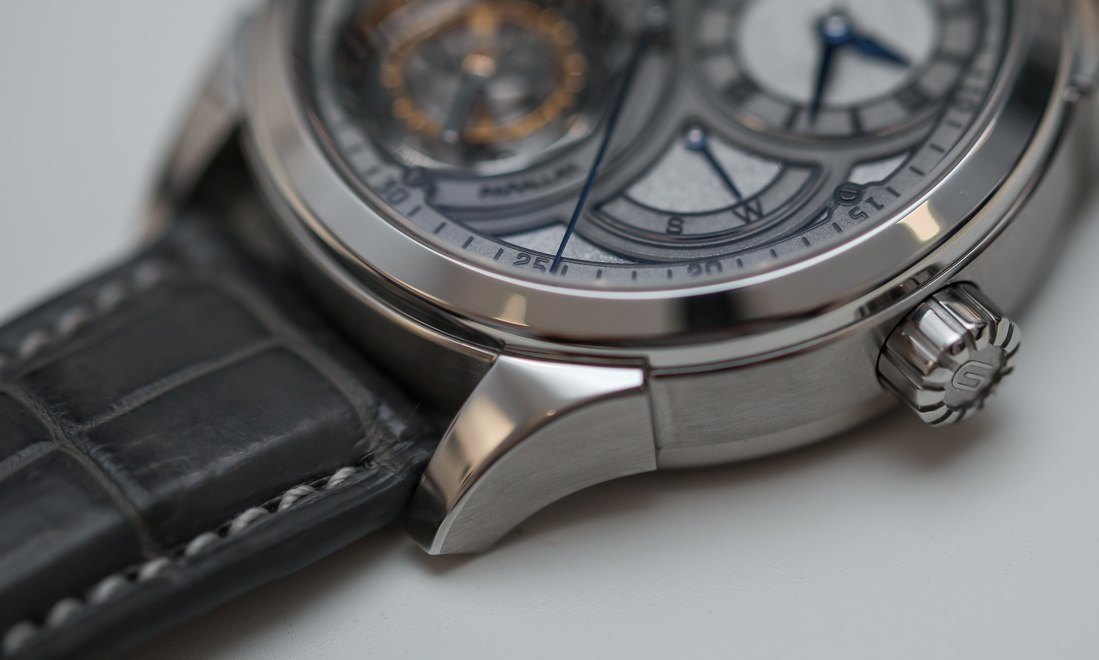 The Parallax Tourbillon 1912 comes in a 43mm stainless steel case that is water-resistant to 30m. The case is identical to another Grönefeld watch – the One Hertz. Despite the pretty unique tourbillon construction (which we will get to in a minute), the Parallax Tourbillon 1912 is actually relatively thin at 12.5mm – that’s slightly thinner than a Rolex Submariner. The case is expertly polished and the lugs are intricately beveled. The crown is white gold and, to my eyes, looks far too large and therefore a little out of place. The upside, however, is that it is easy to operate. 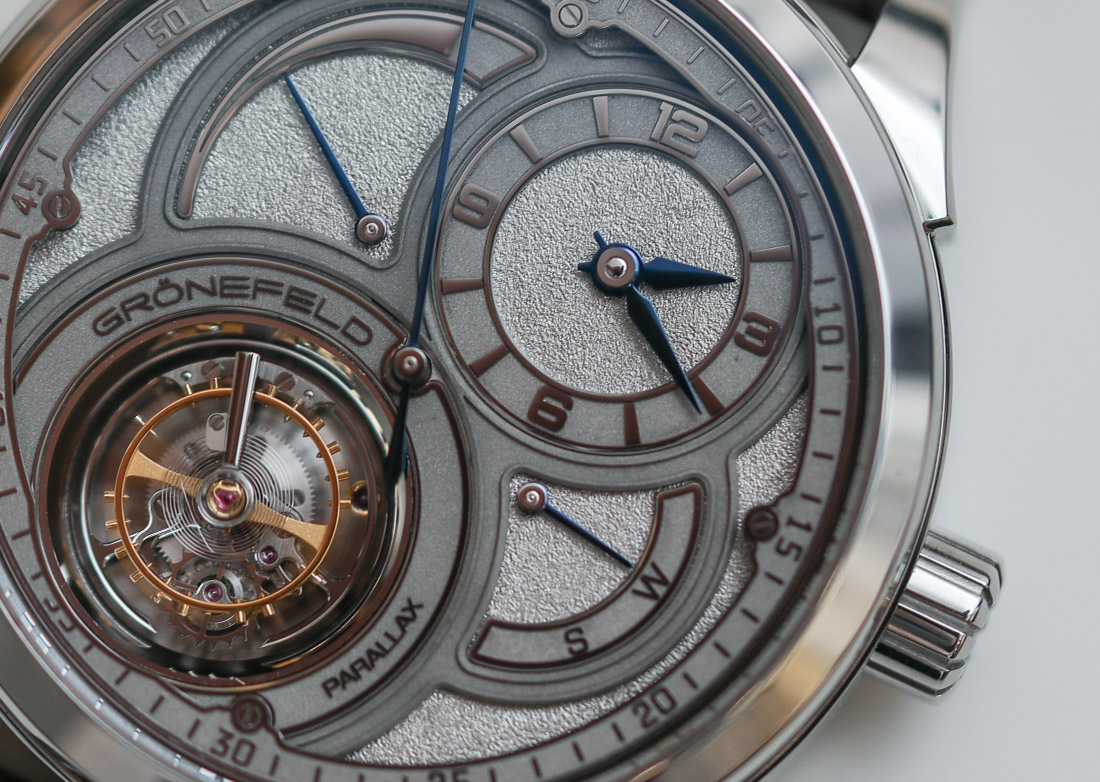 One unique thing about the Parallax Tourbillon watches is that you do not pull out the crown to set the time. Instead, owners push the crown to go back and forth between winding and time-setting modes. A handy indicator on the dial tells owners exactly what mode the watch is in – W for winding, S for time-setting. Here, the large size of the crown makes it easier to wind.

The dial is exquisite and full of tiny details and treatments. The dial is made out of silver and has a frosted surface with diamond-cut bevels. At 10 o’clock, we have a power reserve indicator, and at 2 o’clock we have the raised sub-dial for the time. Just below it at 4 o’clock is the setting-winding indicator. Finally, at 7 o’clock we have the flying tourbillon. The tourbillon is fairly large and looks even more prominent here because it actually sits a little higher above the dial. 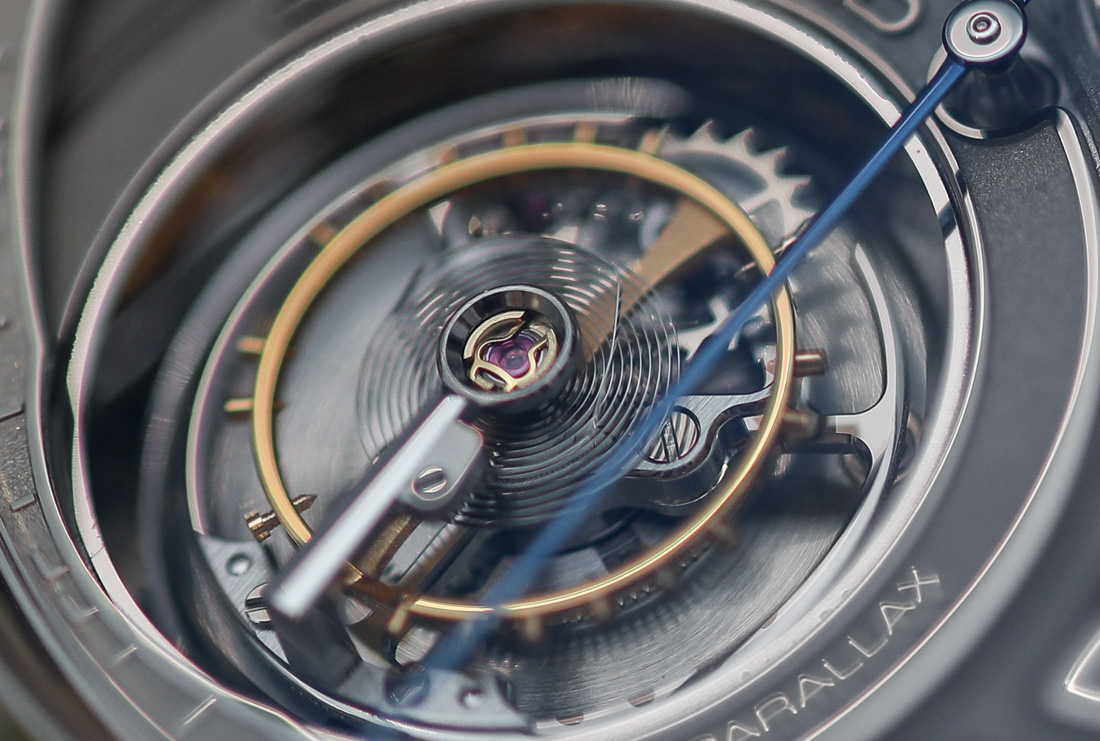 The name Parallax actually comes from the central seconds hand and the raised seconds chapter ring. Parallax refers to the change in position of an object relative to the viewer’s line of sight. So to prevent this error and to ensure that the owner can read the seconds accurately, the Parallax Tourbillon 1912’s seconds chapter ring was designed to sit right below the central seconds hand. The Parallax Tourbillon 1912 has lance-style flamed-blued hands that provide good contrast against the silver dial, making the watch easy to read. 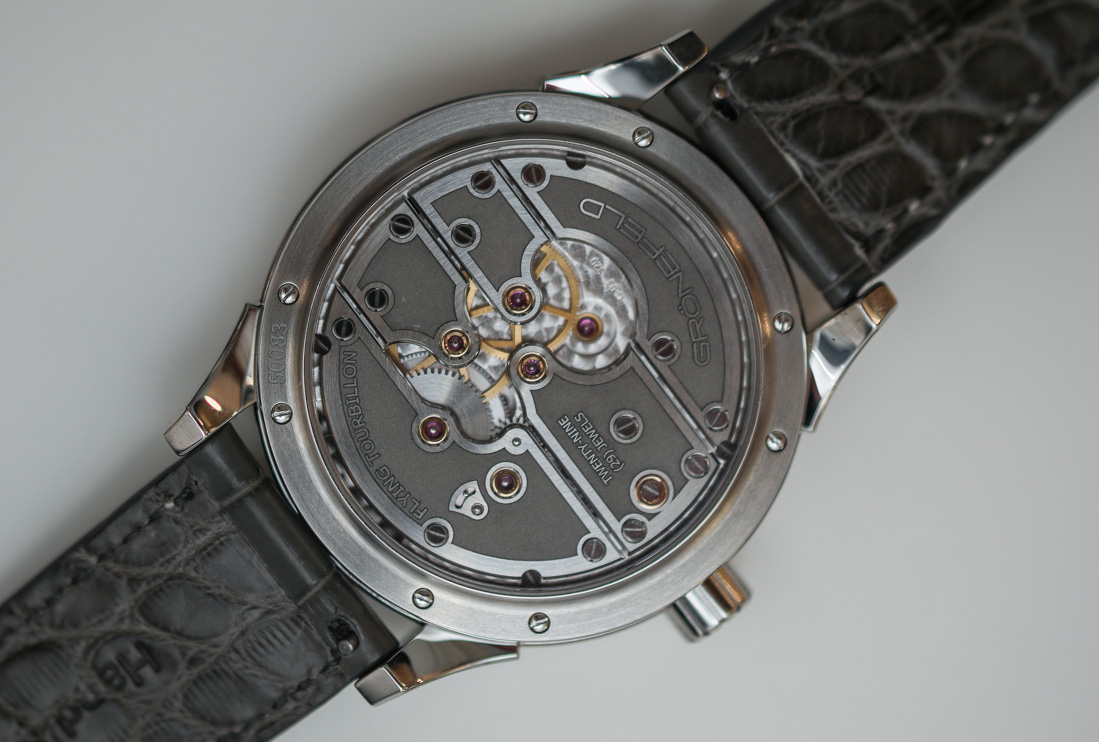 The movement within is the in-house Caliber G-03. It is wound by hand and features a power reserve of 72 hours. The key innovation here is its unique hacking and resetting mechanism. When the crown is pushed and the watch is set to time-setting mode, the flying tourbillon and central seconds hand will continue beating until they reach 12 o’clock and then they will stop, allowing owners to easily set the time and synchronize it with a reference time. This also enables owners to verify the accuracy of their Parallax Tourbillon 1912 watch. 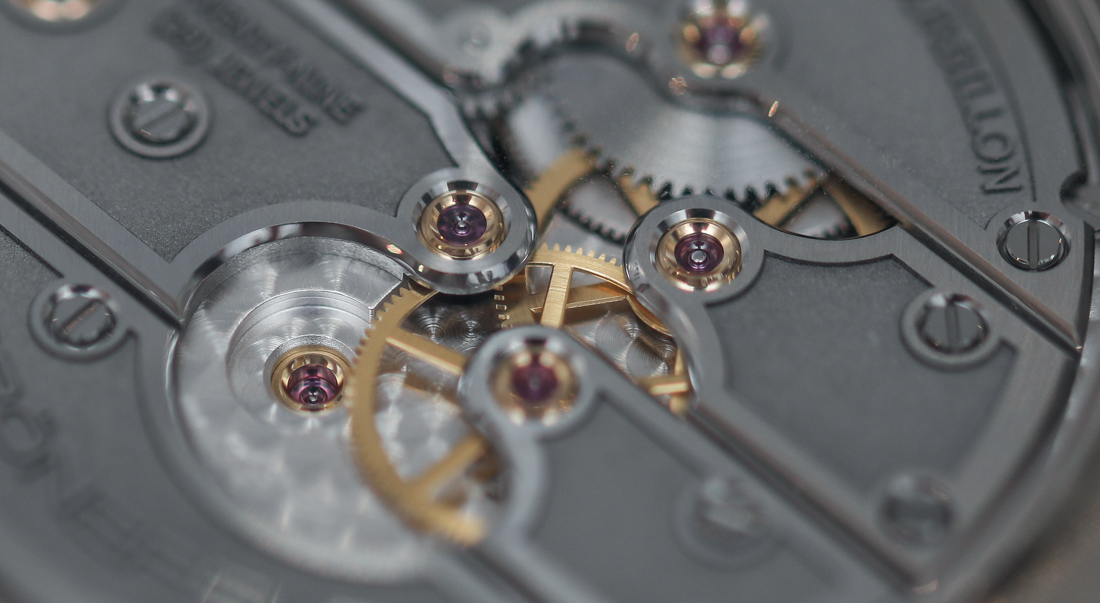 The movement is visible through the sapphire caseback and it is quite a sight. The view is mainly dominated by the movement’s bridges but there is extensive finishing to keep things interesting. The bridges are all beveled by hand, of course, and they are also micro-blasted and have circular graining on top. Text on the bridges are all done by relief engraving. The screws are all polished and so are the countersinks for the jewels. What is also interesting is that the bridges are made out of stainless steel, which is unusual because they are harder to work with. However, according to the Grönefeld brothers, they also keep their finish better. 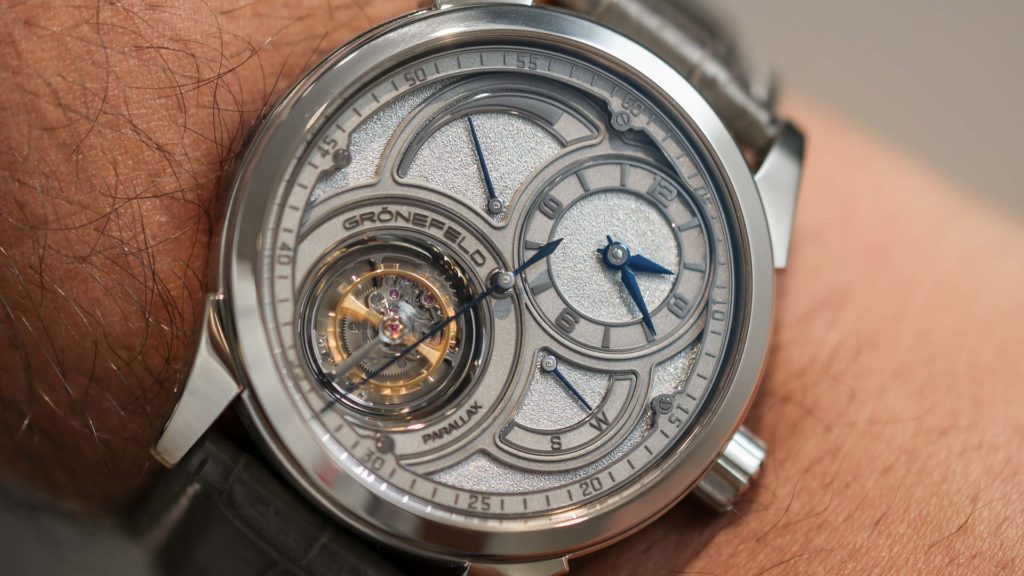 Like I said, despite the stainless steel case, this watch is only marginally cheaper than its red gold sibling. However, its unique resetting mechanism means this isn’t just any run-of-the-mill tourbillon watch. For tourbillon watch lovers, this is a worthy addition to the collection. The Grönefeld Parallax Tourbillon 1912 in steel is limited to just 12 pieces and is priced at €134,250. gronefeld.com