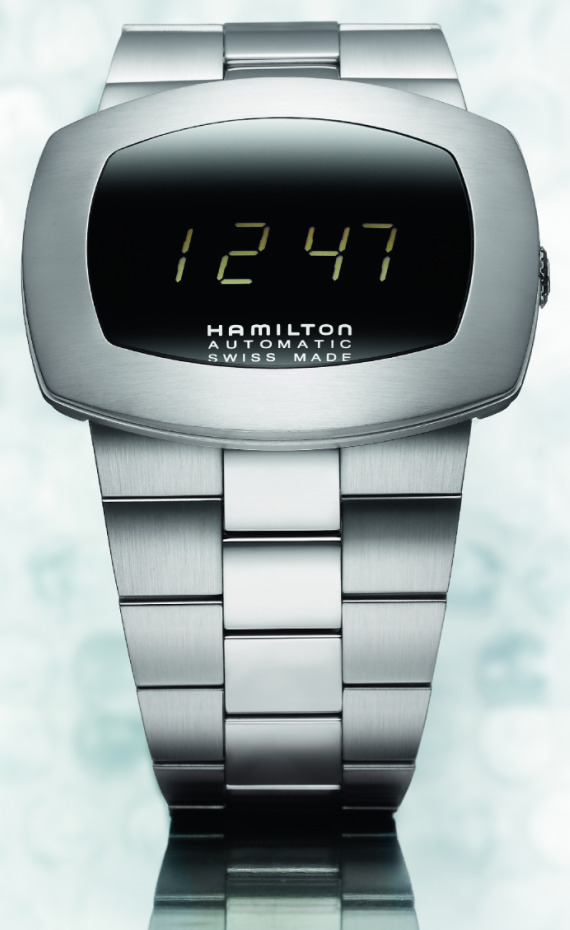 I think that this will be a pretty well-received watch for 2010, and that a lot of people are going to dig this. Another of the many many “historical rereleases” we have been seeing lately. So, a long time ago Hamilton released the Pulsar. It was the first digital watch. This was in 1970, just a year after Seiko introduced the first quartz watch (that was analog). The Hamilton Pulsar was not an LCD (liquid crystal display) watch, but rather had a red colored LED (light emitting diode). With an LED, power consumption is a bit issue although it is bright when viewable. As such, you needed to manually press a button on the case to display the time on the Pulsar – as it would have drained the battery too quickly otherwise. Despite this, it was an accurate movement and really popular at the time. Pulsar then sort of branched out into a subbrand (which is actually part of Seiko now I think), and you could get similar watches up until almost now. By the way, the first 6 digit LCD watch was released shortly thereafter, again by Seiko.

For 2010 there is a brand new watch in the style and memory of the 1970 Pulsar, this is the Pusomatic (oohh! Sounds fancy) and has a very new tricks up its sleeves. You can tell by the “evolution diagram” how the original watch turned into the new one design side. Larger case with a similar shape, but now a different screen. Oh, and I totally like the look of the original bracelet better. The fat outer links with thin inner link before the bracelet tapers looks sorta of odd, but maybe I need to wear the thing. 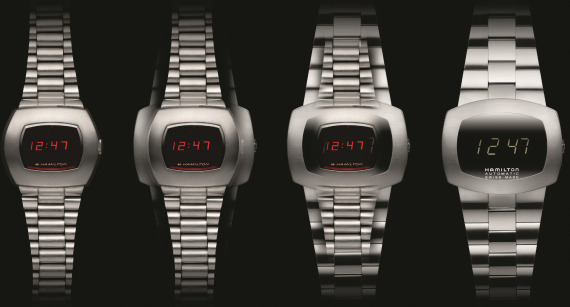 The Pulsomatic throws out the LED display. Why? Cause of the power issue. So the cool red numerals are not going to grace your vision. Instead you have a nice high quality reverse LCD screen (black background, lighter numbers), that always looks better than standard LCD screens. I must admit I wanted to see the cool red numbers. Maybe there is a backlight feature in red that I don’t know about.

Hamilton put the Pulsomatic in a 39mm wide steel case with the TV screen style dial. In addition to the steel tone, look like you can get the watch in black PVD as well as rose gold PVD. Yes, nothing says “rich geek” like a gold tone one of these. “Wanna touch my Pulsomatic baby?” Sure there is lots of wasted space on the dial, but it looks cool. Lots of the display design was taken from brands such as Ventura. You can also get a rubber strap in addition to the steel bracelet. Also, the case is water resistant to 50 meters and thankfully comes with a sapphire crystal.

Now for the interesting part – well sort of. The movement “borrows” from the concept of the Seiko Kinetic by having an automatic rotor generate power for the battery. Actually the Ventura watch (Q Spark I think it was) also did this. Inside the Hamilton Pulsomatic is the Calibre H1970 automatically generated quartz movement (gee, I wonder why “1970” is in there). It has a power reserve of about 82 days when fully charged, and is made by Swiss ETA. It might have the rotor viewable through the watch caseback, but I am not sure.

I think that the watch has enough retro appeal for those who recall the original watch and never had one. I think the red LED light will be missed. Maybe Hamilton will come out with some version in the future that has a tinted red crystal. That would be cool. Otherwise it is pretty nifty and will be available for purchase near the end of the year. Price is going to be $1,495.