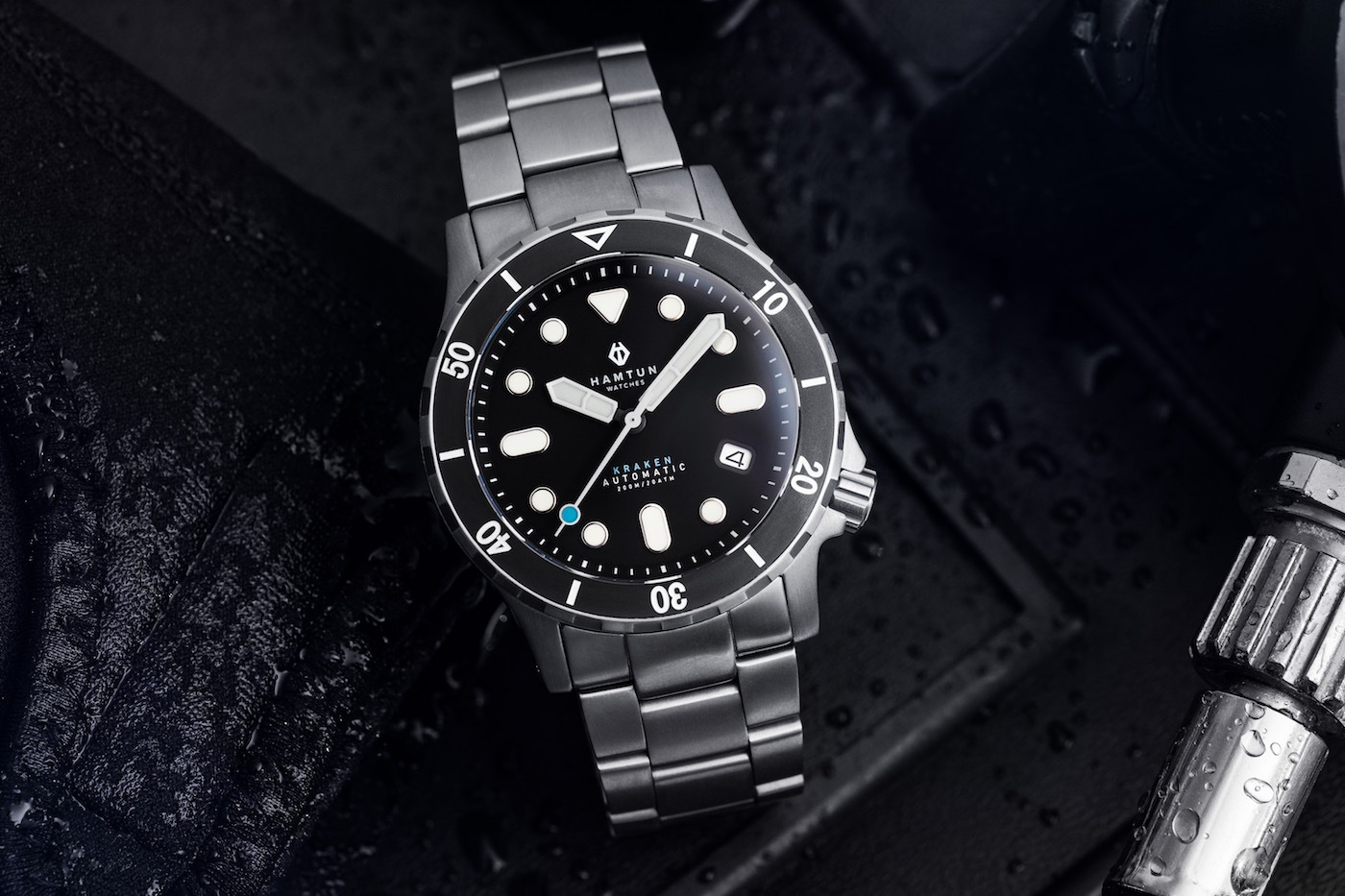 Microbrands are my obsession. I’m not so much obsessed with the products as I am the brands themselves. I am fascinated by the creation of desire, how individuals identify gaps in a very crowded marketplace and create ideologies told through stories designed to pry open those gaps and generate breathing room for a new name. It’s incredibly difficult, and yet there are many, many brands that have experienced positive results on Kickstarter these past few years. One of those watches currently enjoying success is the Hamtun Kraken H2 watch. 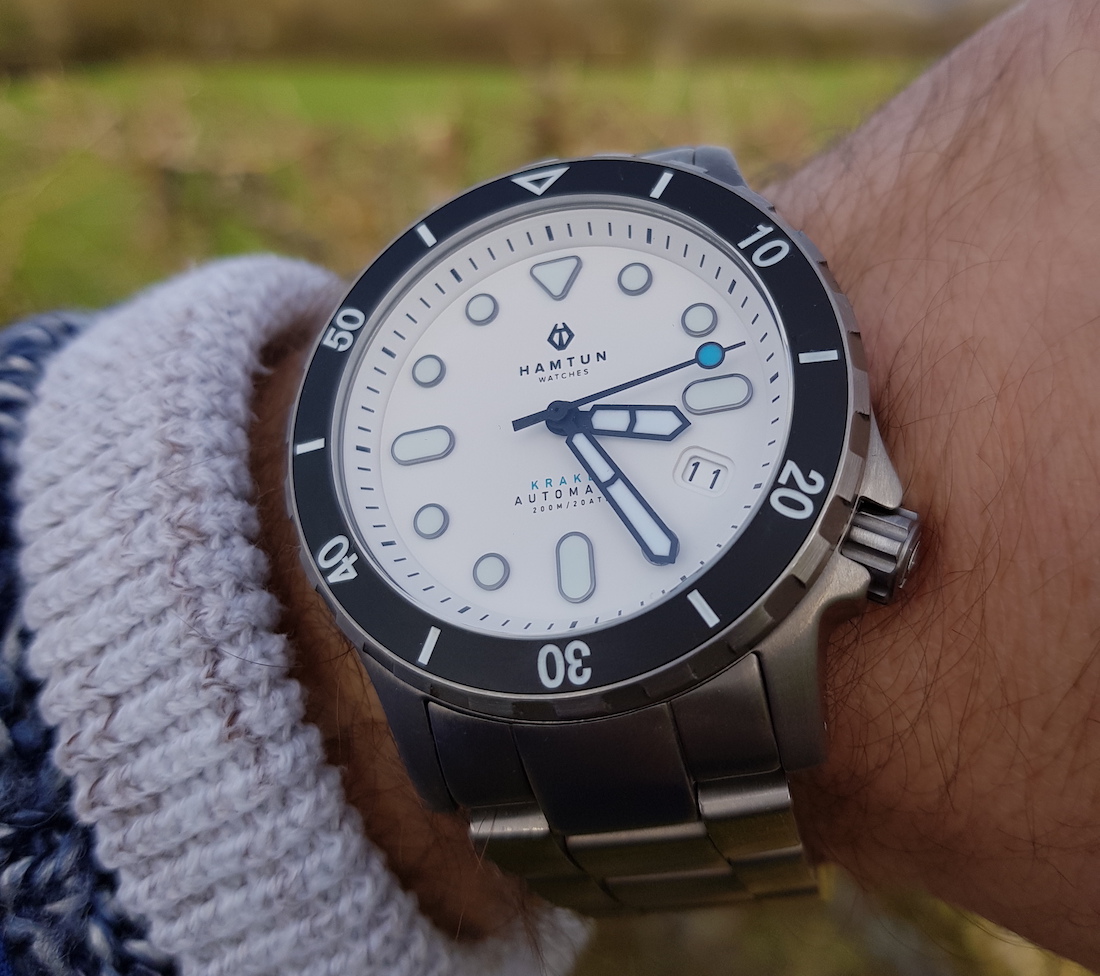 Based in Southampton and named after an ancient name for the city, Hamtun is the brainchild of Ross Davis. Ross, like many watch lovers, grew tired of lusting over watches that were way out of his price range. So, he decided to do something about it. 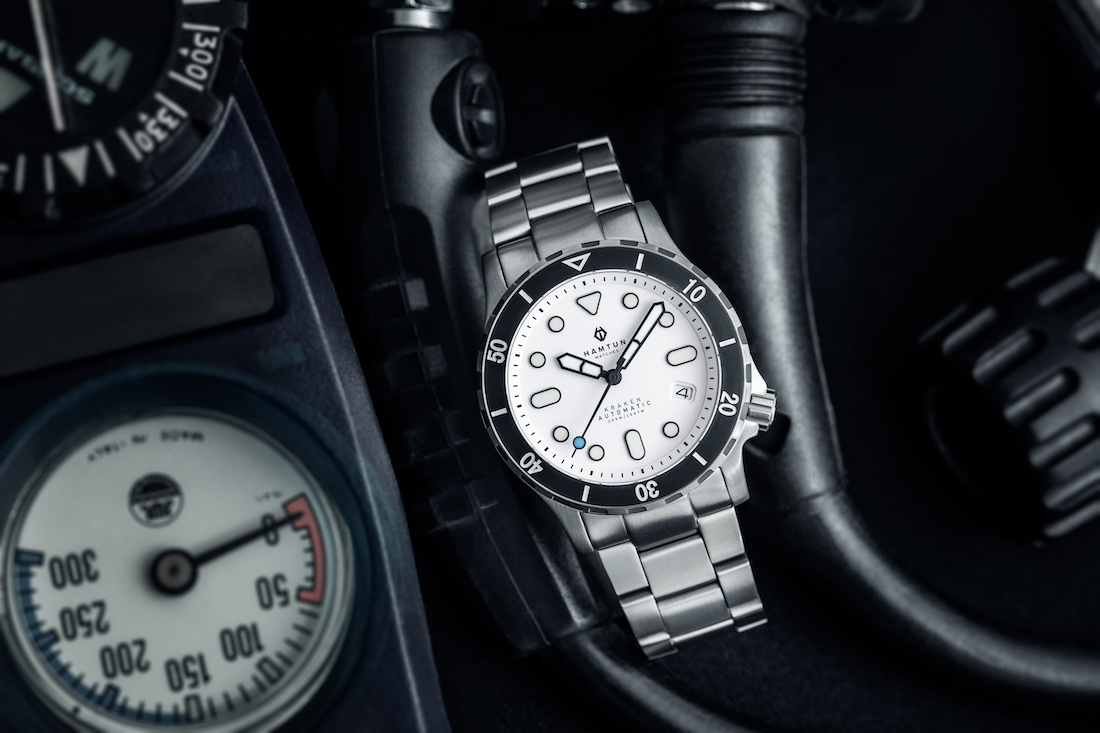 As with many microbrand owners, Davis was really designing a watch for himself. Given the success of the Kickstarter campaigns that followed, it seems a lot of people have the same tastes. Efforts began in earnest way back in 2015; four years later, Hamtun is releasing its fourth watch, the Hamtun H2 Kraken. At the time of this writing, it has obliterated its Kickstarter target. With over 1,000 backers, the £20,000 target has been surpassed by around 300k. Every stretch goal has been reached, meaning backers will receive extra color options, a 12-hour bezel option, individual watch serialization, and a free rubber strap. 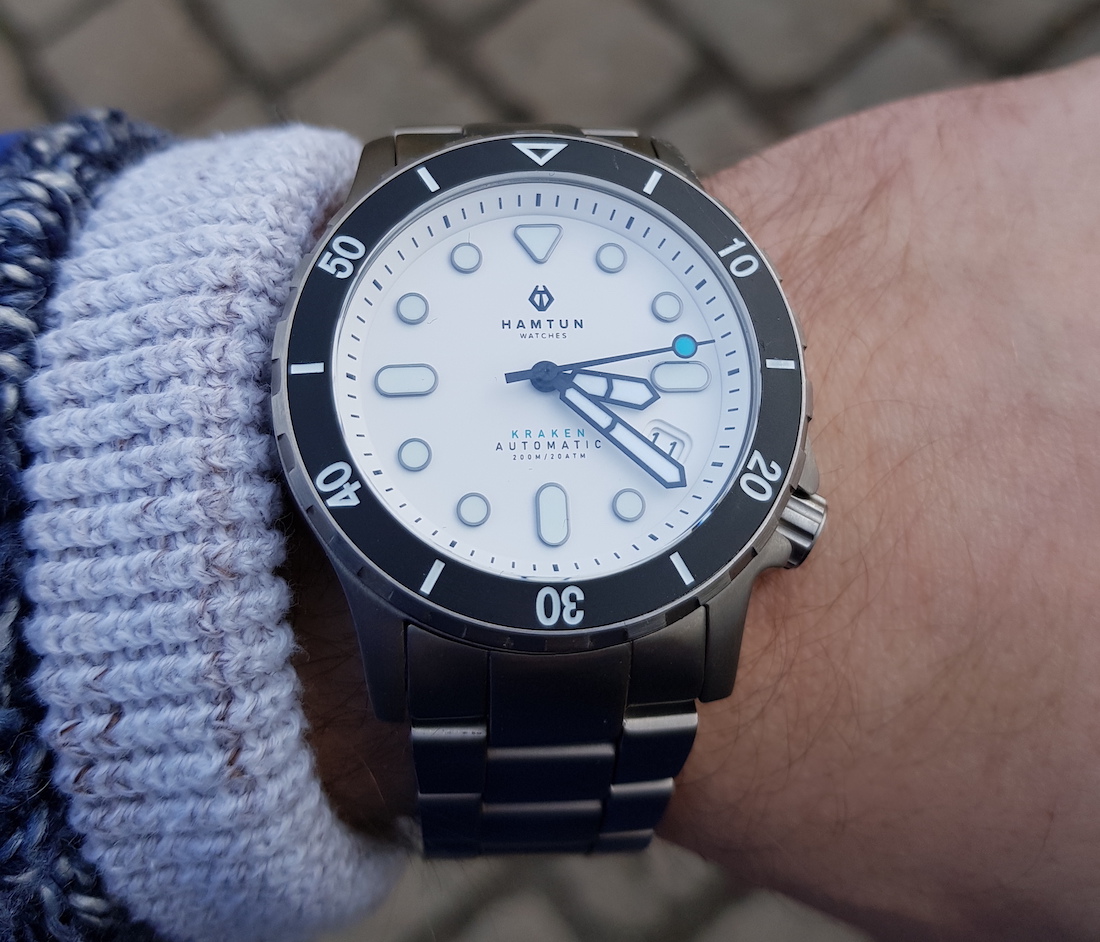 This kind of success story is all well and good, but it doesn’t tell us too much about the product. We’ve heard it all before from other brands that have smashed their target but still failed to get the nod from real watch aficionados. So how does the Hamtun H2 Kraken stack up against the competition? And with a starting price of £199, just how good can it really be? 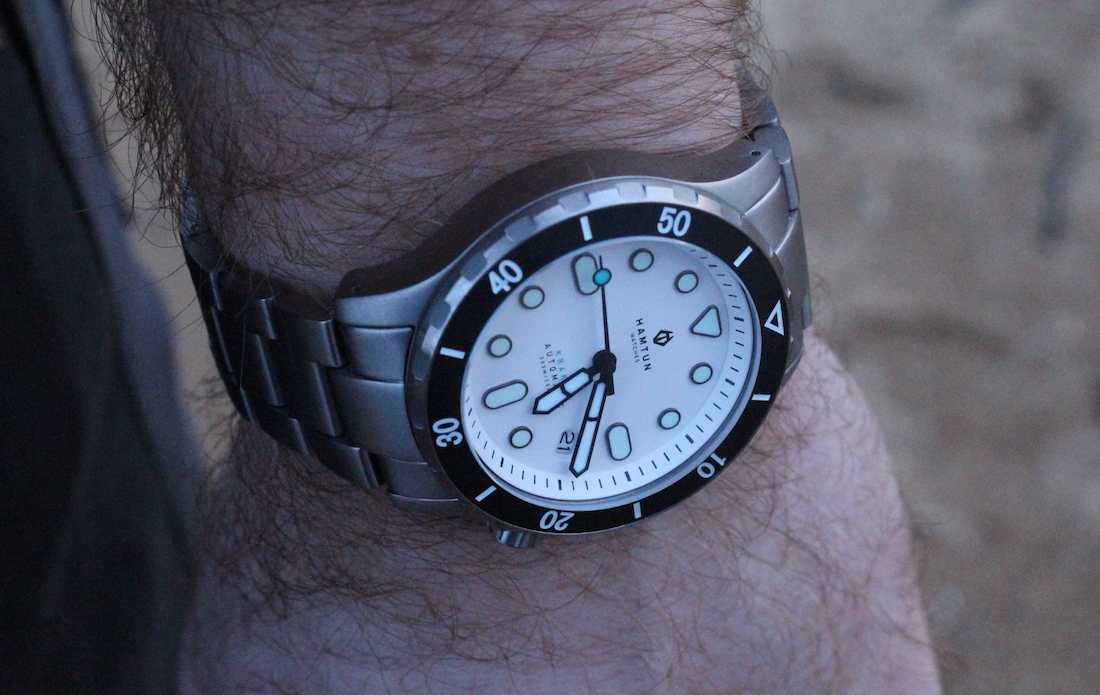 The Titanium case has a scratch-resistant coating that actually works. Please note that the photographed prototype has not been treated with the scratch-resistant coating, hence the surface marks visible on some images. The case is a reserved 41mm in diameter and wears very comfortably. The prototype I reviewed was slightly taller than the finished article will be, coming in at 13.9mm-thick, as opposed to the target thickness of 13.6mm. It did sit up relatively high on the wrist, which made the diameter appear more diminutive than it actually is, but I liked the effect and relished having a tough-looking diver that was a more elegant size. The uni-directional 120-click rotating bezel is really easy to grip and rotate, even when wearing gloves. 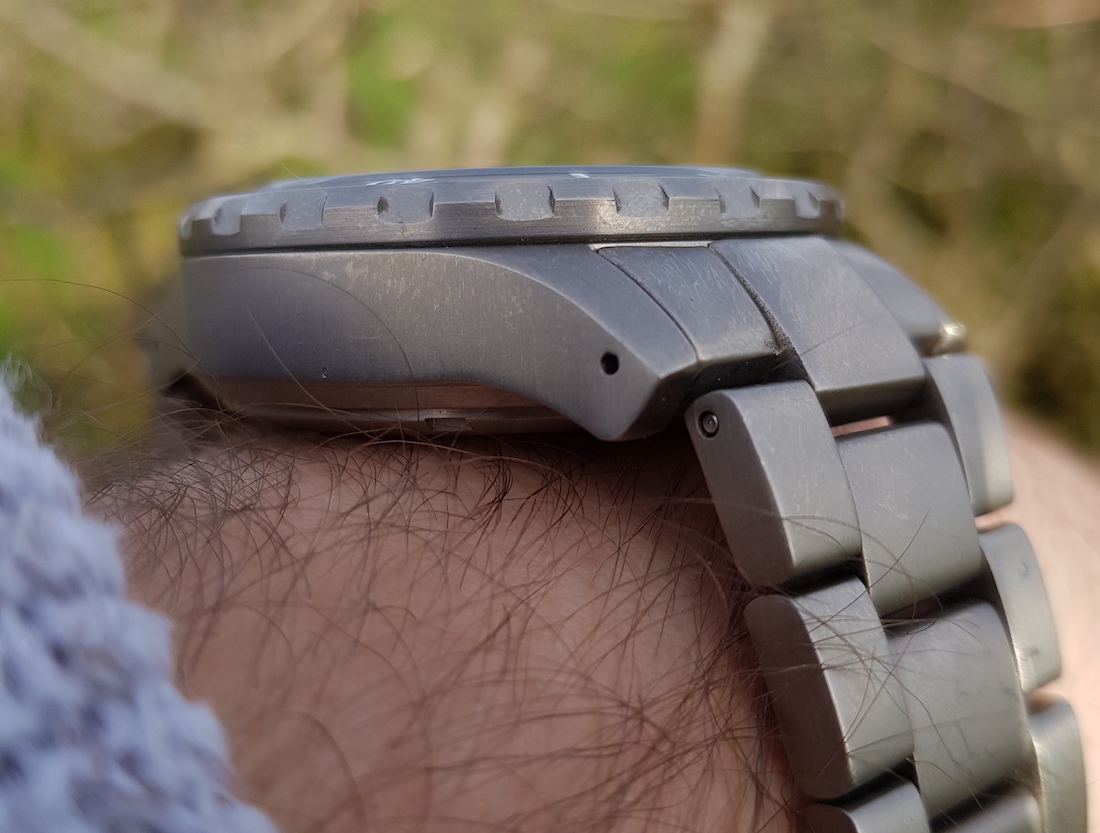 The lightness and conductivity of titanium make it very easy to wear for long periods, even during activity. The dull gray of the brushed case matches the matte ceramic bezel very nicely. The only thing I don’t like about titanium is the fact that it picks up fingerprints really easily, which is a minor gripe exacerbated by my oily skin. There’s nothing a watch designer can do to work around that, but it’s not something that would stop me from buying a titanium watch in light of the material’s many benefits.

Pleasingly, for a watch at this price point, the crystal is not only sapphire but also boasts a multi-layered anti-reflective coating. These robust external elements are joined by a very sharply decorated screw-down crown, emblazoned with the brand logo, resulting in a 200-meter water resistance. 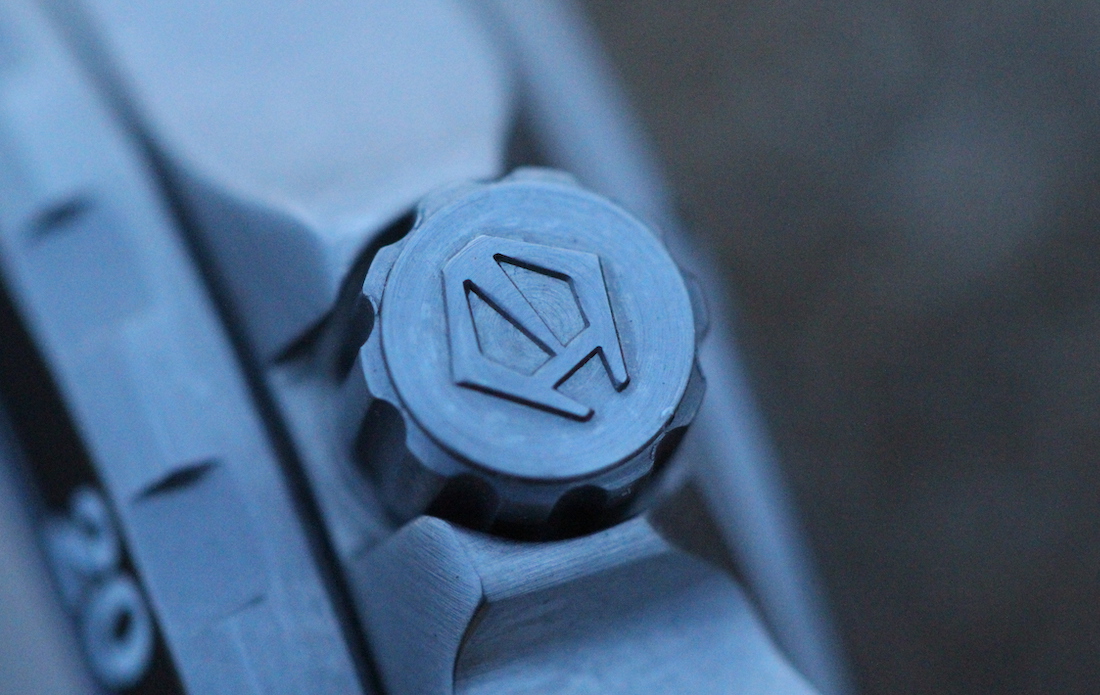 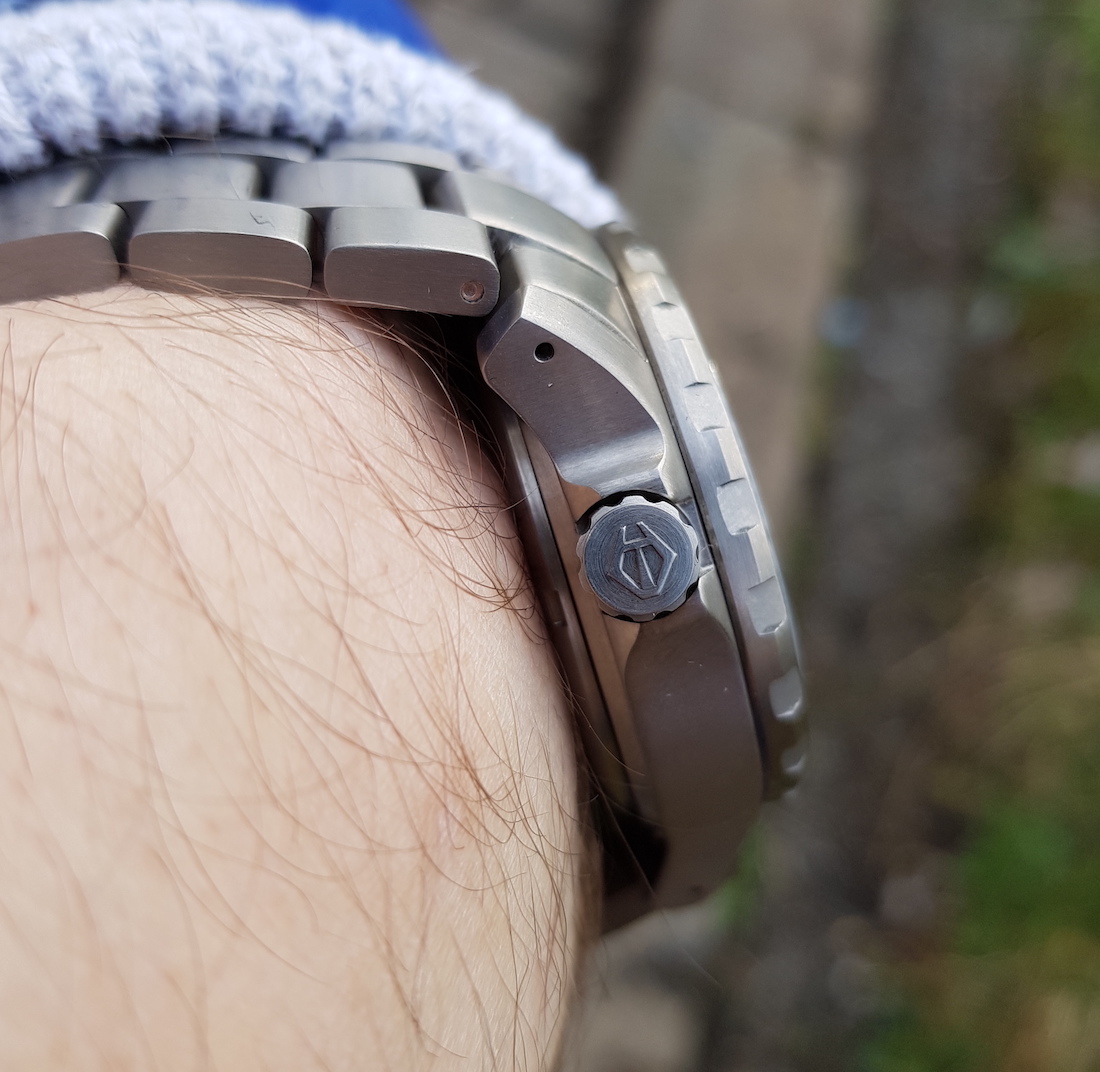 The 22mm lug distance tapers to 20mm at the clasp (which is also laser engraved with the Hamtun Logo). The bracelet uses solid links that are held together by threaded bars that screw directly into the links, themselves, rather than using a two-part screw bar or split-pins. 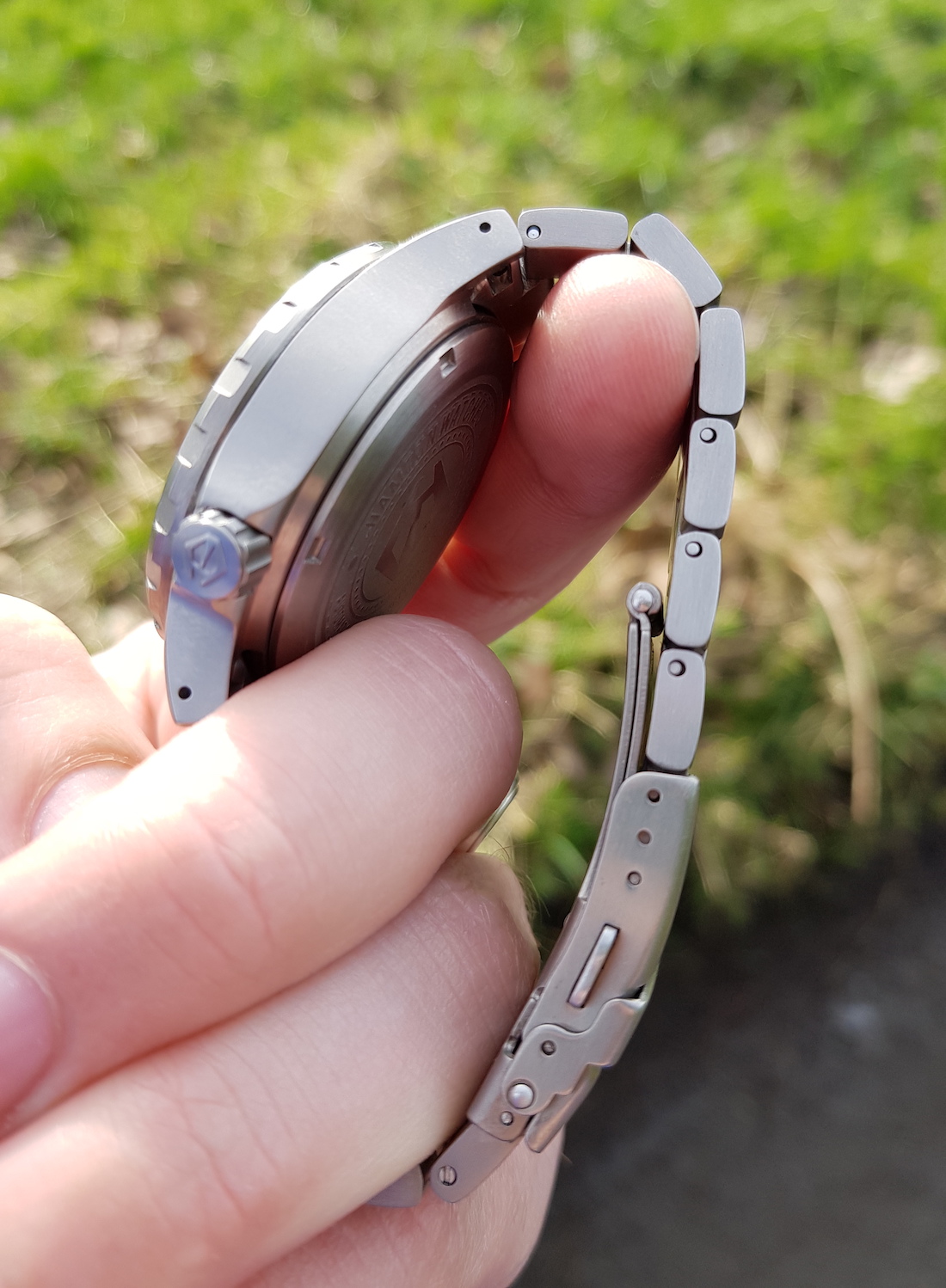 Initially, three dial colors were made available: black, blue, and white. The runaway success of the campaign so far has seen more options added. At the end of the campaign, three more color options will be offered (although the exact colors are yet to be locked-in 100%). All dials and bezels feature BGW9 Super-LumiNova. The dial starts to glow in low-light conditions quite readily, but the bezel lags a little behind. For the price-point, the lume quality is very good and the glow homogeneity significantly above average. The date window at 4 o’clock has a stepped border, adding to the depth of the dial, which is already decent thanks to the applied hour markers. 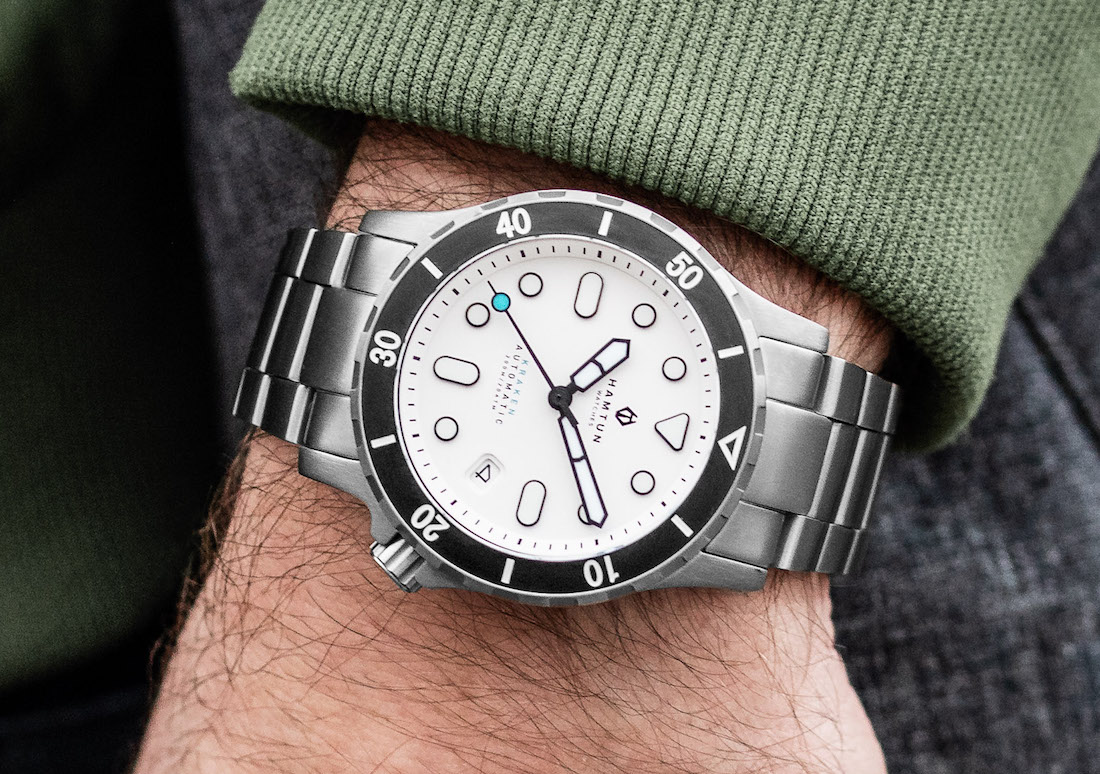 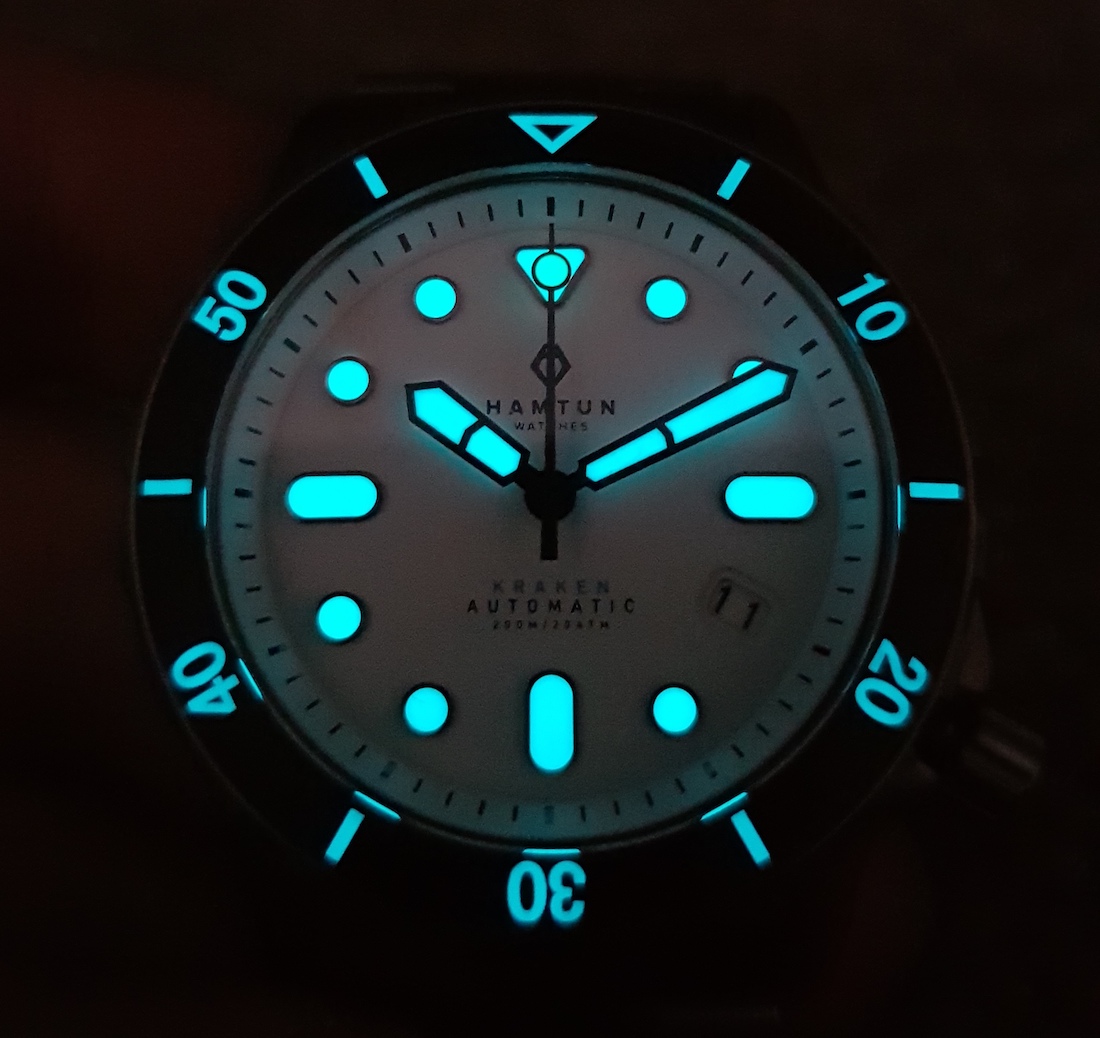 The Hamtun H2 Kraken comes equipped with a Seiko NH35 as standard but can be upgraded to a Sellita SW200 for £100 more. The Seiko has a lower operating speed than the Sellita — 3Hz instead of 4Hz — but the biggest difference is in the expected timekeeping. The Seiko has an accuracy rating of -20/+40 seconds per day in comparison to the Swiss-made Sellita’s much tighter parameters of -7/+7 seconds per day. At this price-point, I would absolutely plump for the Sellita, but the prototype I reviewed was powered by the NH35; it performed admirably and was actually running within 10 seconds a day during the loan period. 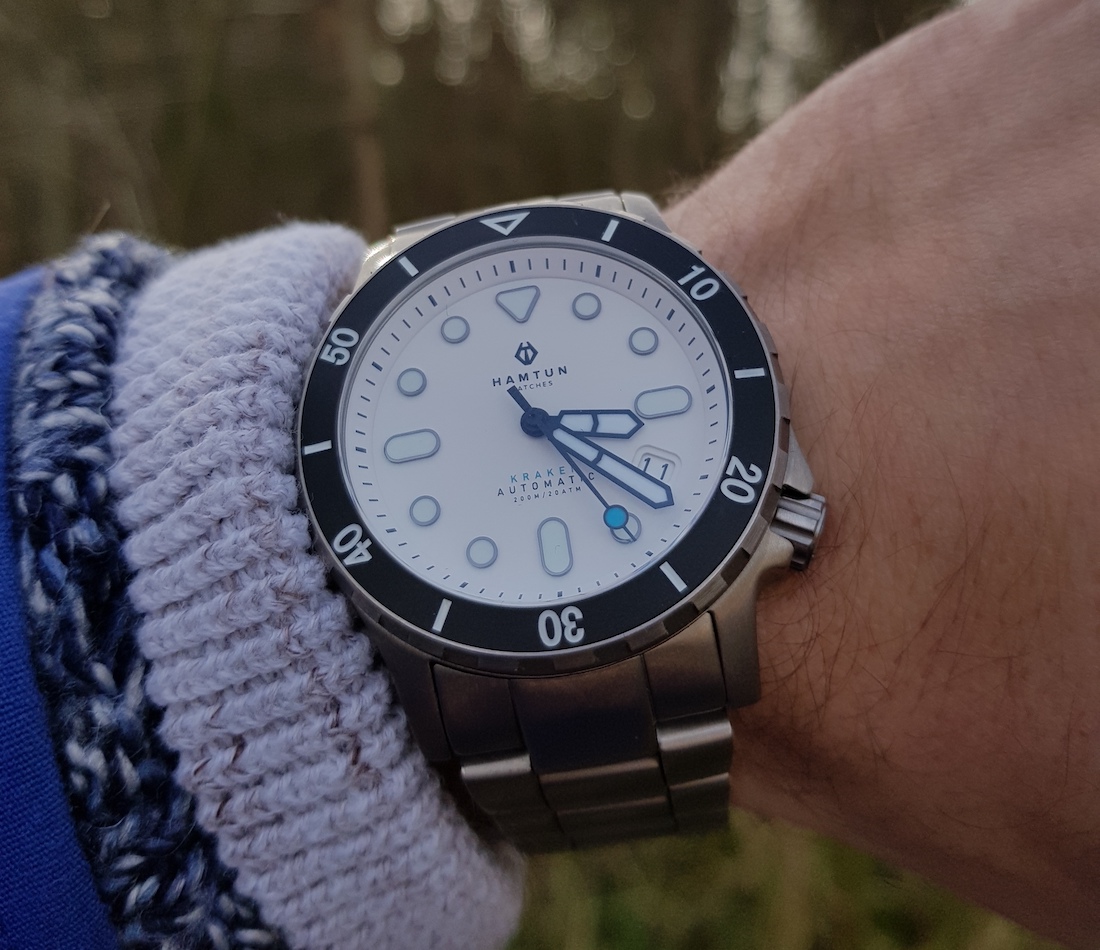 So, I thought I’d take a slightly different tack with this review and ask Davis a couple of questions I think might be interesting for our community to chew through. This is a little bonus insight into some of the thought processes I’m sure many of us can relate to, as well as an individual’s account of the challenges faced by any new brand owner.

What inspired you to found Hamtun?

I’d always been working towards running my own business at some point and had assumed it would be in software, as that was my background. However, I’d spent years re-working designs I thought were great for clients who didn’t have a clue. I didn’t want to end up running a business like that, completely at the whim of a rich client. It had to be fun, and I had to have full control.

In early 2015 I was writing (badly) about watches in an attempt to learn a bit about them, just out of interest. I wanted to get a nice watch for myself but only knew the big brands. I’d assumed all watches were made by reasonably sized companies. The microbrand world was one I didn’t understand at all. As I joined forums and Facebook groups, I started to discover that so many of the watches I found and liked were from one- or two-person operations. The watches that were available at price-points I could afford didn’t speak to me as designs. Something was missing for me — so I decided to do something about it. 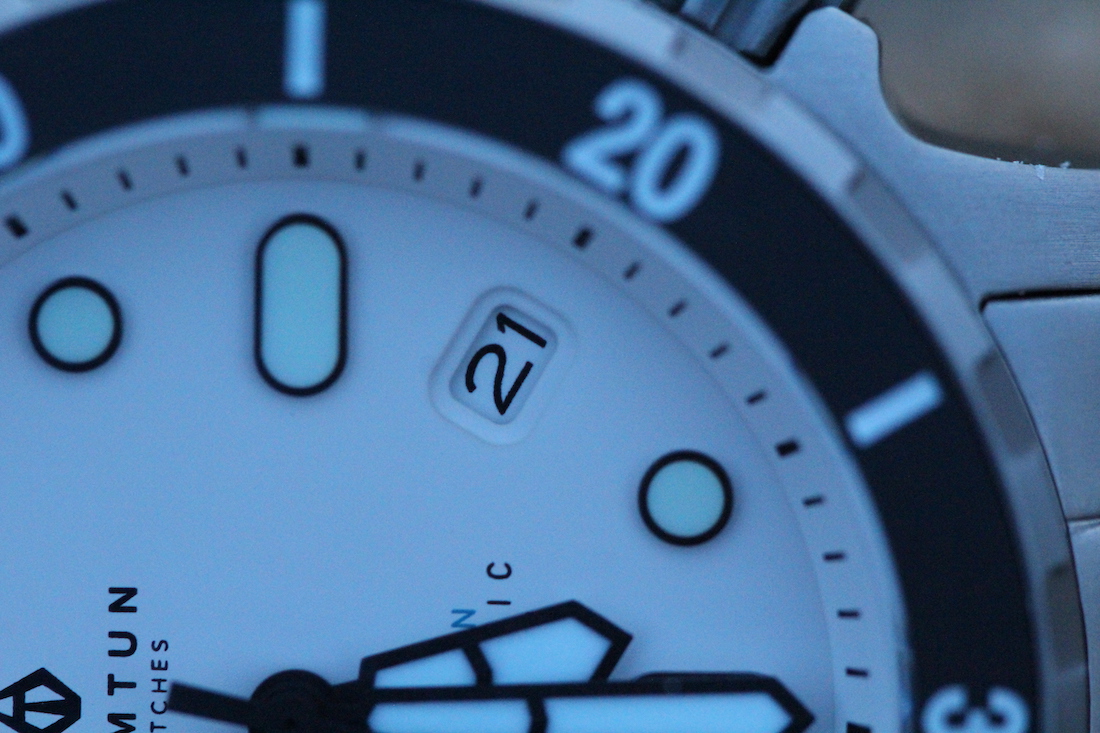 What design elements were you adamant had to be featured in the finished project?

There were a few things that I was focused on for my first model, but most importantly, the watch had to be one that I would buy if I saw it from another brand. I was making a watch for me, not for other people.

In terms of actual features, I knew I wanted to do titanium and ceramic, and it had to be automatic. I wanted it to feel more like a tool watch with matte finishes and a tough look, rather than something polished and more traditional.

But the biggest thing was hitting a low price-point. I’ve had very normal jobs, and I have three children, so I wasn’t someone who had lots to spend on watches. I wanted to make something for people like me to enjoy. Even now, four years later, the watches I make still start from, “Could pre-Hamtun Ross have afforded this watch?” If the answer is no, I re-work things. 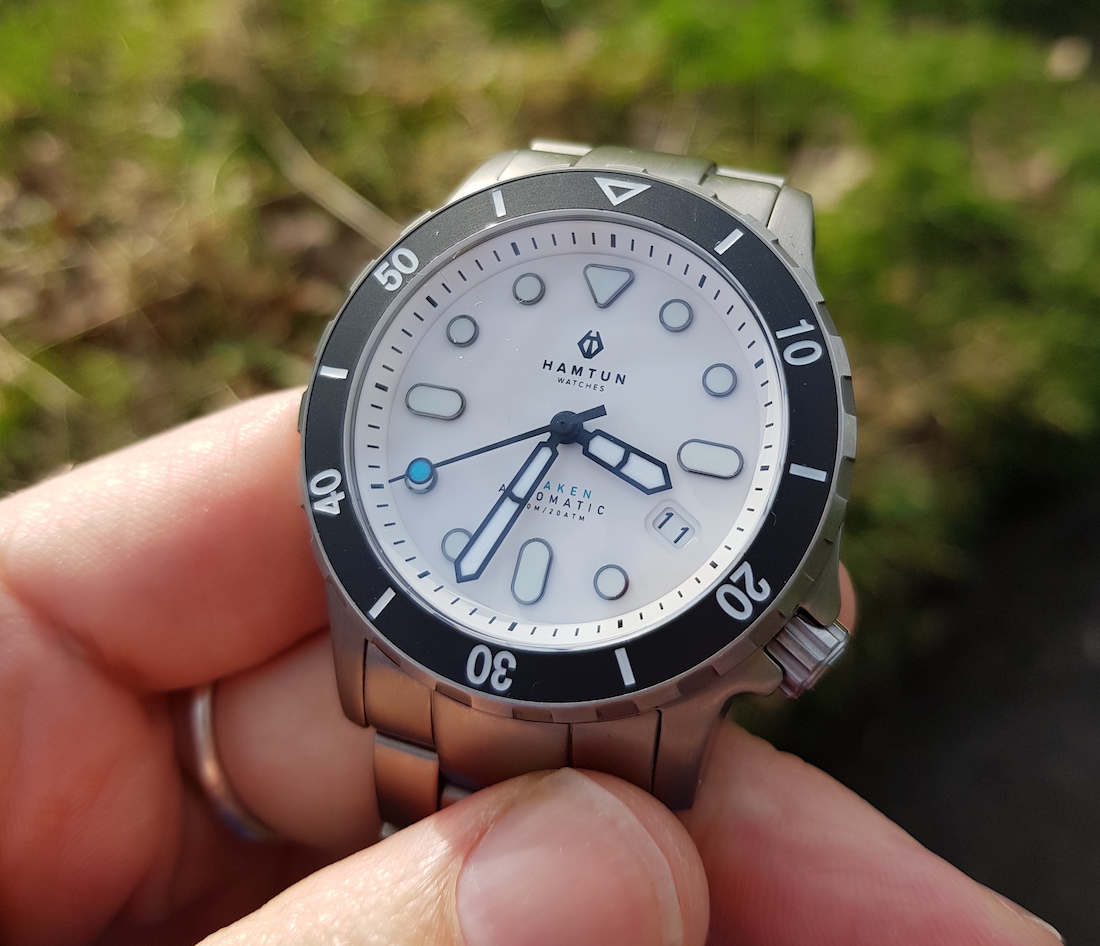 What were the biggest challenges you faced when you started out?

By far, the biggest struggle was finding manufacturers I trusted. I built prototypes of the H1 with several, but without any contacts, it was incredibly hard to find partners that were of the standard I needed. I had a lot of sleepless nights with early projects.

It wasn’t until my current supplier came to the UK to meet me in early 2018 that I was 100% convinced by one. Having that relationship, and knowing they will deliver what they say and to a high standard, removes a huge amount of the stress and allows me to focus on the fun stuff, like designing and selling. 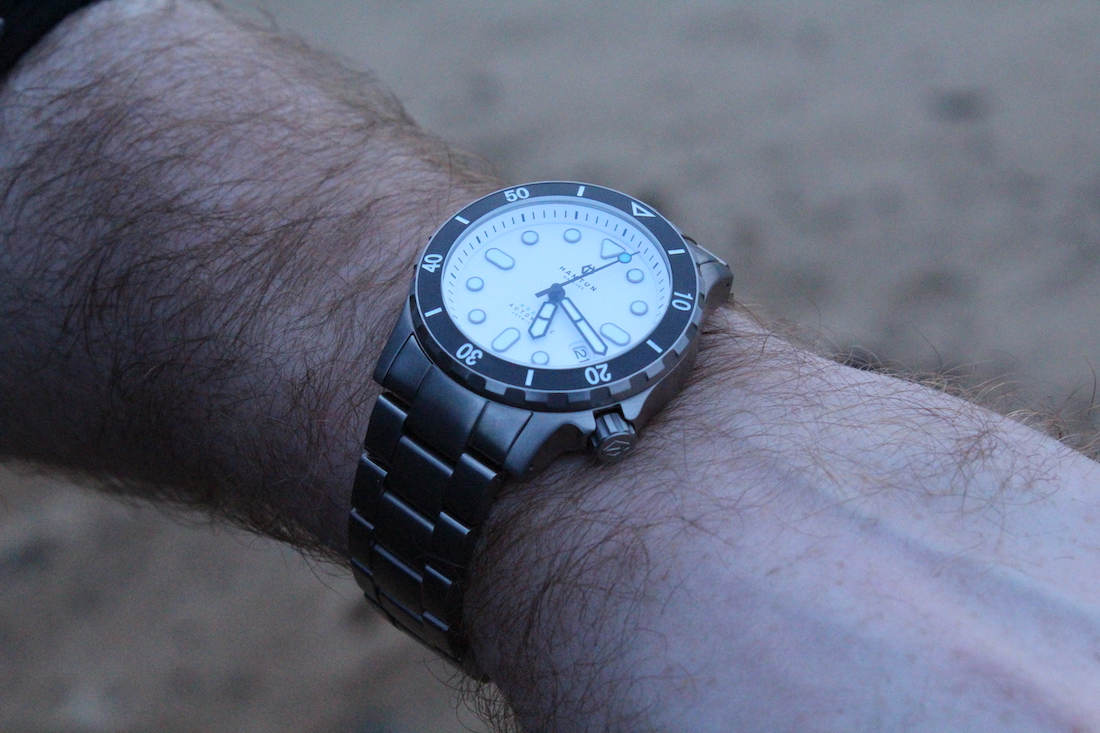 Can you give us an example of a time when you had to make a cost vs quality decision, and what were the justifications for that choice?

The Kraken H2 is made from what I’d call “regular” titanium. Grade 2. It’s what a majority of titanium watches are made from. I’d have loved to use the higher Grade 5, instead, but I couldn’t do it and still hit a nice low price-point. The scratch-resistant coating was my solution to this. It gives great protection at a fraction of the price.

Additionally, in an ideal world, I’d probably have a Miyota 9015 in the base model. When I started designing the first H1 back in 2015, that was the plan. The popularity of that movement (and then the price) increased significantly at around the time I needed to launch, though, so I dropped it. The Seiko NH35 allows me to hit that price-point without losing the things that really matter, such as reliability, hacking, and hand-winding.