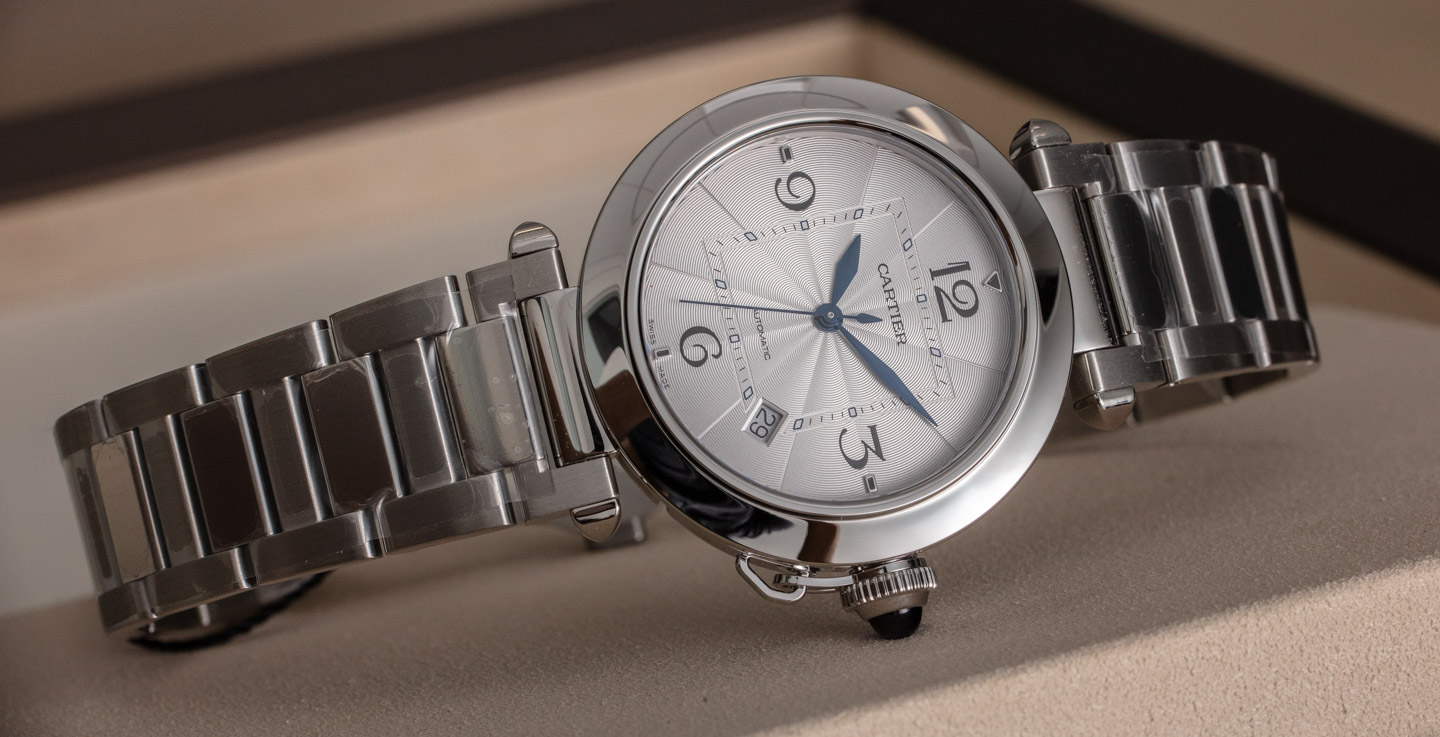 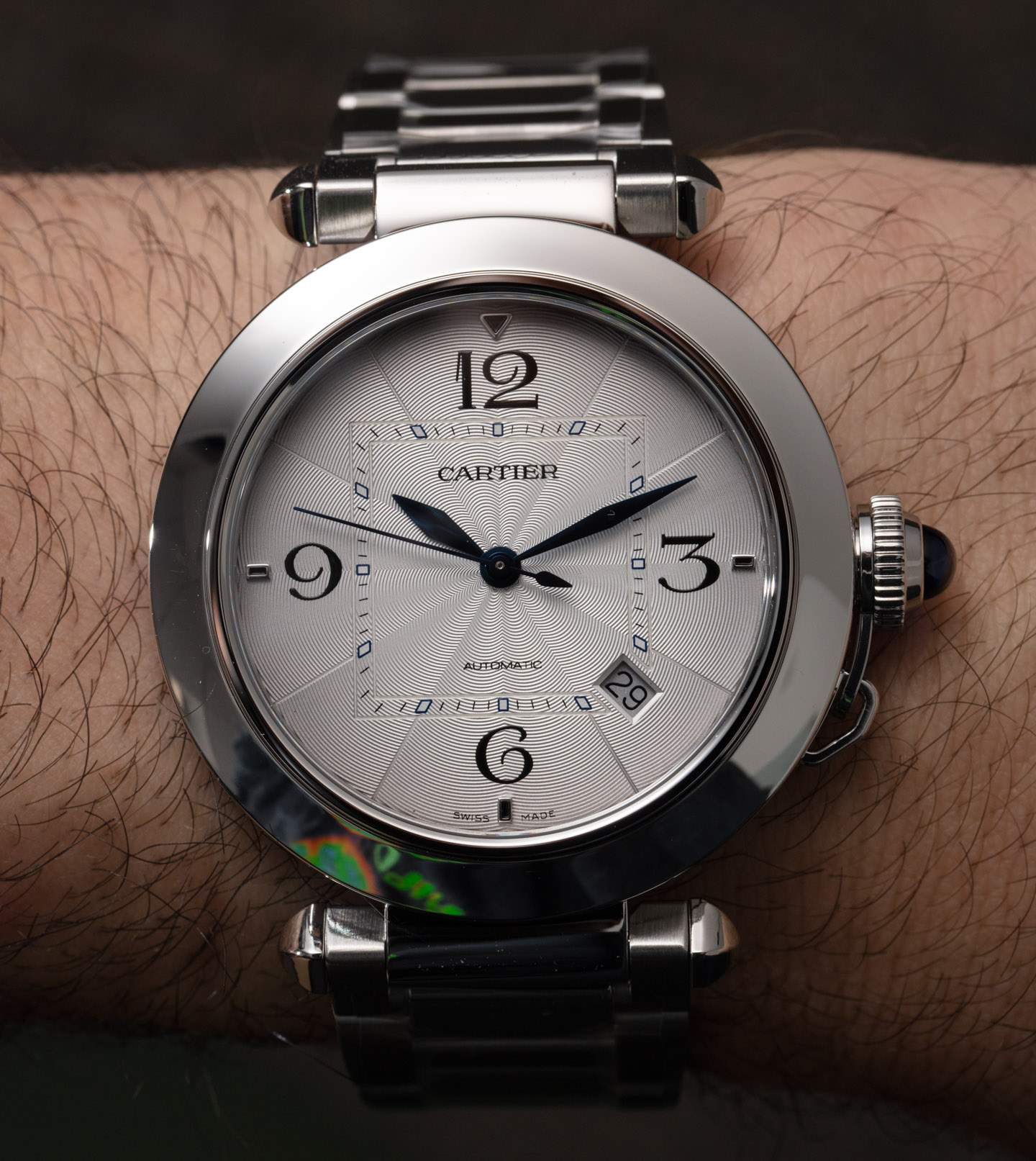 It is part of Cartier’s strategy to suspend production of products like watches when they are still popular — only to reintroduce them some years later in a new form. Cartier has done this with a number of its iconic models, and it performs the admirable task of making something old look new again. The latest watch collection to get a fresh treatment by the designs at Cartier is the Pasha. Today, I look at the reference WSPA0009 “Pasha de Cartier” 41mm Automatic that is a new release for 2020.

My understanding is that Cartier received some flak for reintroducing the Pasha (people have been asking for a new Roadster for years) this year. I don’t know what the crux of the argument was, but I find the Pasha perfectly tasteful and as quirky today as it has been for a while. Compared with most other watchmakers, Cartier a larger number of distinctive watch designs, more “iconic timepieces,” if you will. This is because it has advanced (for years) model families that only endure with time but that celebrate some artistic or quirky design element. While Rolex similarly invests in the ongoing establishment of its product collection legacies, Rolex is much less quirky in its designs. Cartier’s great legacies of design always do something unexpected (so is the Parisian way) and yet continue to be very capable timepieces.

The Pasha, admittedly, isn’t for everyone. It’s always been among the “softer” luxury sports watches in terms of its masculinity. It might be a bit more macho than a Ballon Bleu, but the Pasha represents a more graceful side of men’s sport watch design that, nevertheless, is also not boring. I think what throws a lot of contemporary men’s tastes askew with the Pasha are the “bar-style” lugs that are typically found on women’s watches these days. That said, when wearing the Cartier Pasha 41mm, I really don’t think of it as anything but a men’s watch.

In addition to the new 41mm-wide version of the Cartier Pasha, the brand also has a new 35mm-wide version for women. Most of the 41mm-wide models are in steel with a matching bracelet (and accompanying strap), but 18k yellow and rose gold models are also available (only on straps). If you like this steel model and want to spend just over four times as much money, you can also opt for this same watch with a fully skeletonized, manually wound movement in the reference WHPA0007 with the 9624 MC movement costing $26,400. 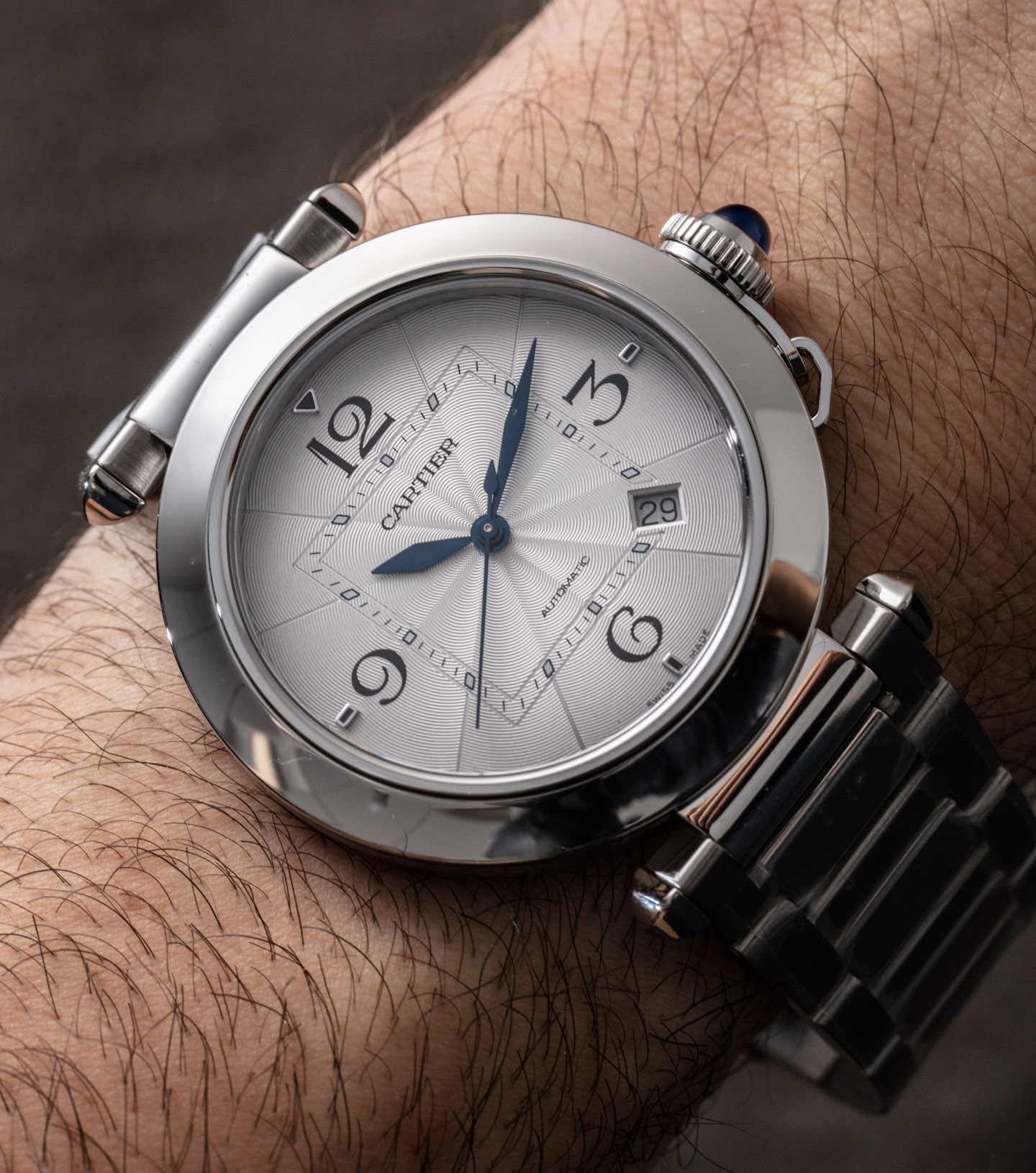 This more basic movement execution in the standard Pasha 41mm Automatic is the Cartier in-house-made caliber 1847 MC automatic, which is visible through the caseback and operates at 4Hz with about two days of power reserve. The Pasha case follows the lead Cartier set with the current generation Santos and includes its “QuickSwitch” bracelet attachment system. This allows the wearer to easily remove the bracelet ends and replace them with a strap — no tools required. The bracelet also has a “SmartLink” system that makes the bracelet very easy to adjust in size — again, something introduced with the new Santos.

At 41mm-wide, the Pasha wears nicely, but the lugs and relatively wide bezel makes the watch wear a bit on the small side. The case is water-resistant to 100 meters, which is worth mentioning because the entire design point of the watch is to evoke the look of early watch case water-resistance systems. Prior to the development of screw-down crowns, some watches used screw-down caps that created a seal around a crown. This was, no doubt, a concept borrowed from canteens, and when looked at on its side, the Cartier Pasha does look like a hip little flask. 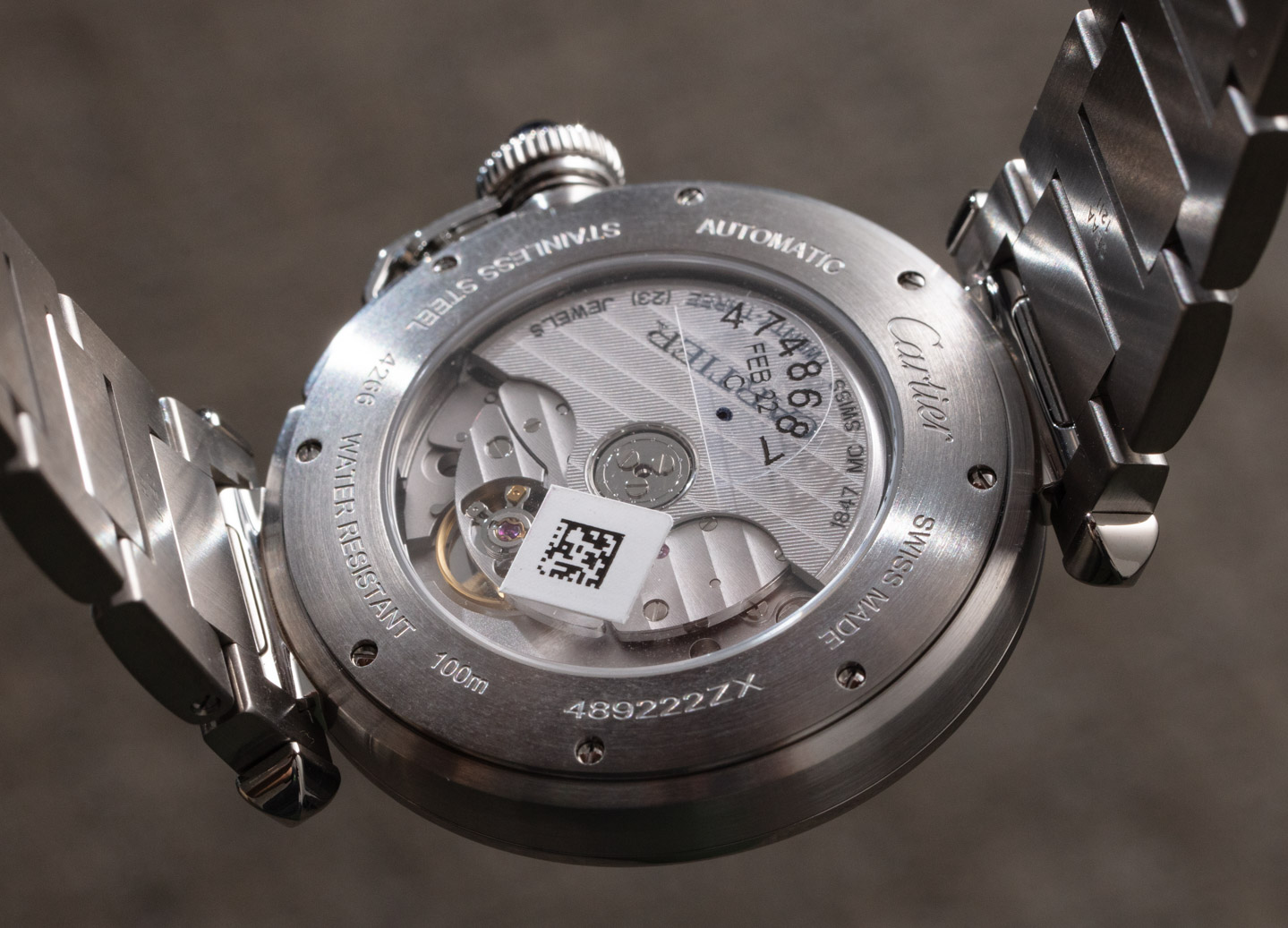 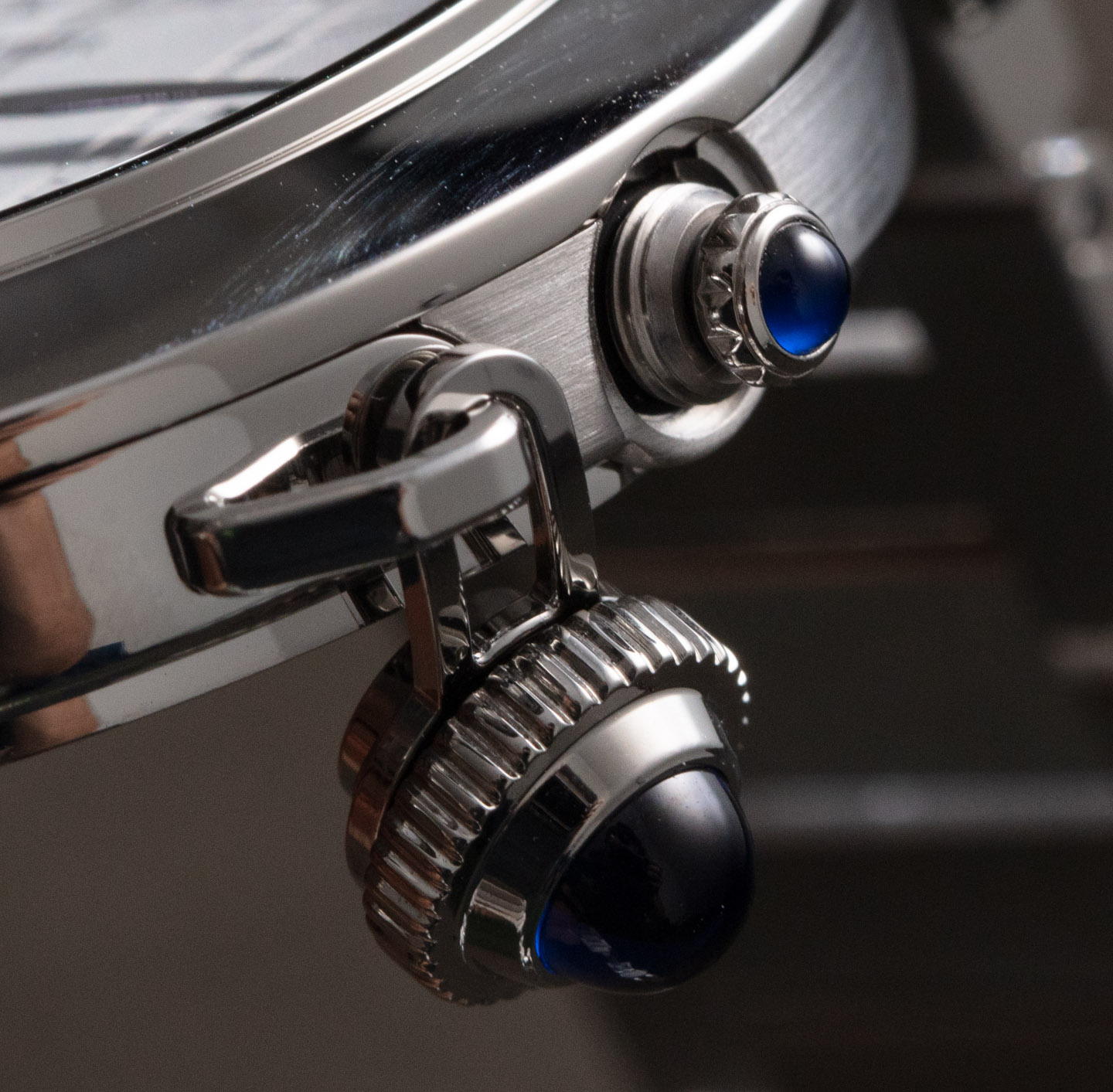 Cartier has taken this historic engineering element and made it into a design cue. It isn’t the only brand to do have done so, but Cartier has done it in the most luxurious sense. Note that the watch I am shooting here is a retail sample and thus it still has plastic protection on parts of the case and bracelet. The outer crown cap and the inner, smaller crown each have blue spinel cabochons. It just wouldn’t be a Cartier Pasha without that. For a sporty watch, the Pasha is actually quite thin. The 41mm-wide case is only 9.5mm-thick. It might not be a traditional diver’s watch in terms of performance, but it is thin enough to wear comfortably and out of the way, which is highly valued by a lot of wearers these days.

While it isn’t to everyone’s taste, the Cartier Pasha dial is distinctive and effective. Clearly, Cartier had a template it needed to work with, so no one was expecting any novelty in the dial department. For that Cartier would point you in the direction of the above-mentioned skeletonized dial version of the Pasha since it does so in a way that is faithful to Pasha’s dial design DNA. The silvered dial has some light texturing on it in a guilloché machine-engraved style (though I am pretty sure the dials are stamped). 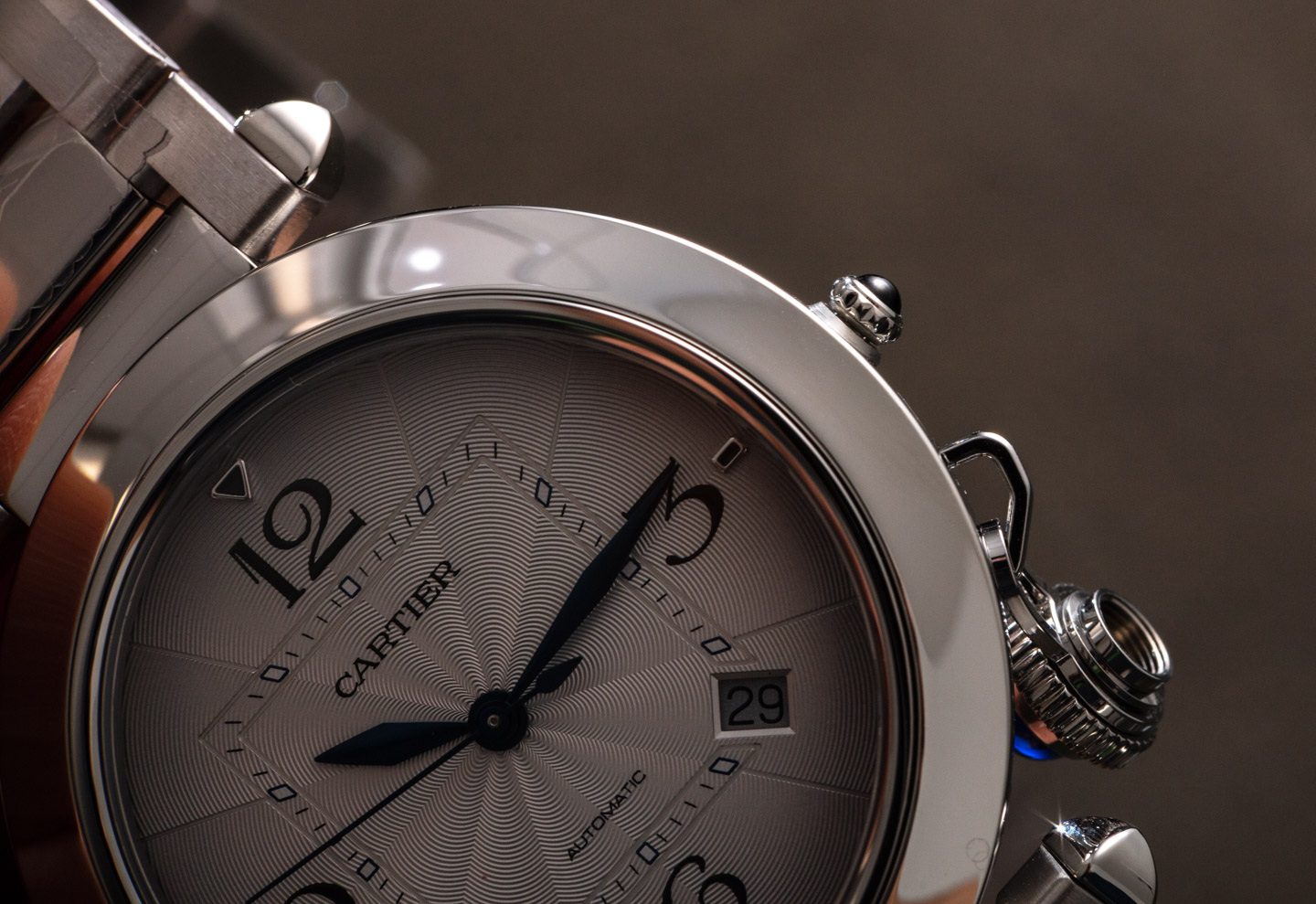 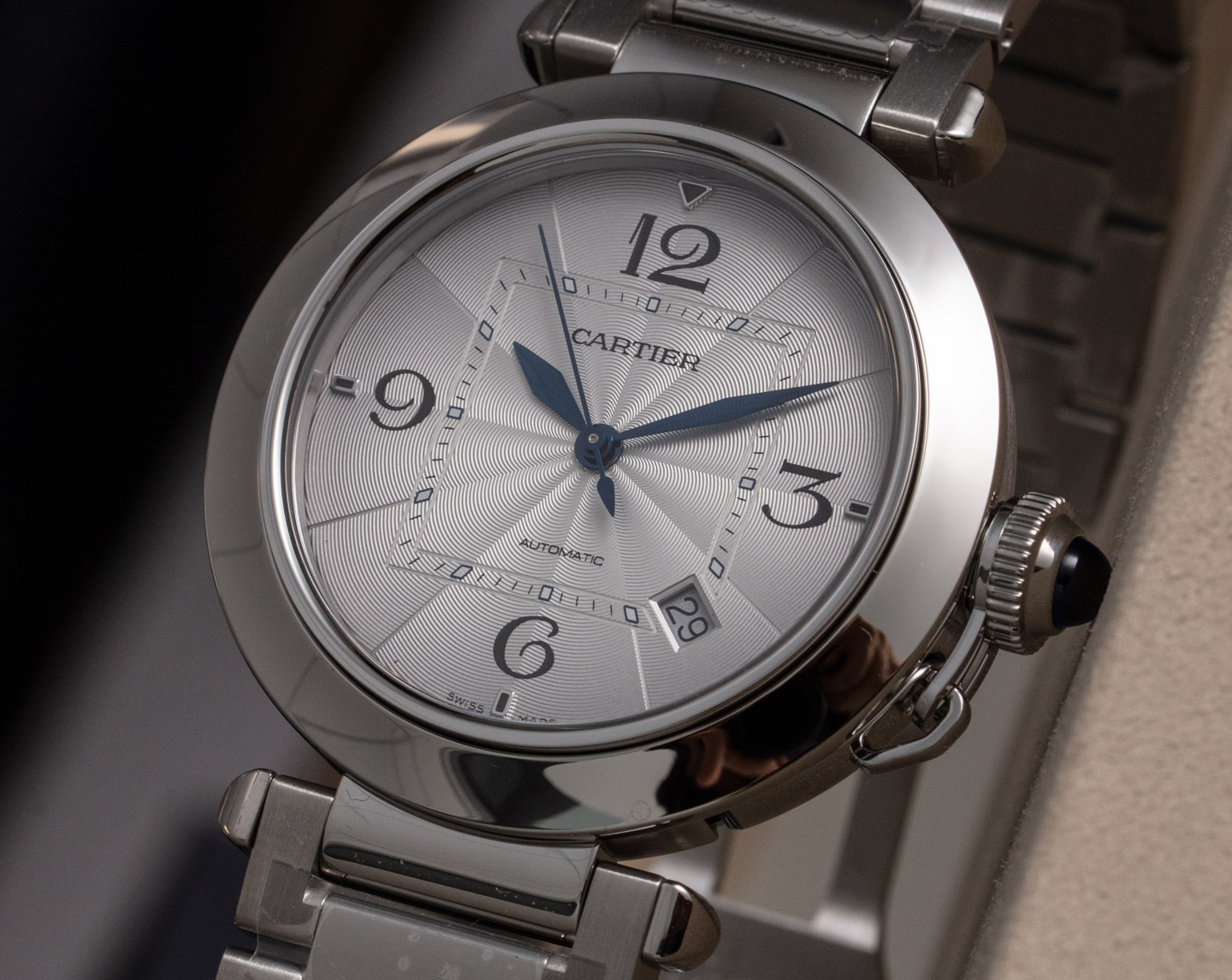 My favorite part of the Pasha dial is the aesthetic use of a square inside of a round case. The dial is circular but dominated by a strong square shape in the middle. This affects the design of the Pasha appreciably. I also like the design of the hour markers and the blued-colored hands, though it is hard to feel as though Cartier couldn’t have made the hands a bit longer/broader for good measure. Applied to the dial in order to make it feel less flat are hour markers at 12, 3, 6, and 9 o’clock. I like this effect but I’m not sure it was enough for the three-dimensional dial theme Cartier seems to have been going for.

The Cartier Pasha is a highly expressive men’s timepiece with a versatile character and distinctive Cartier brand DNA. Anyone who isn’t into the Pasha is welcome to enjoy the many other options for men that Cartier makes available. Price for the reference WSPA0009 Cartier Pasha 41mm Automatic watch is $6,700 USD. Learn more at the Cartier website here.