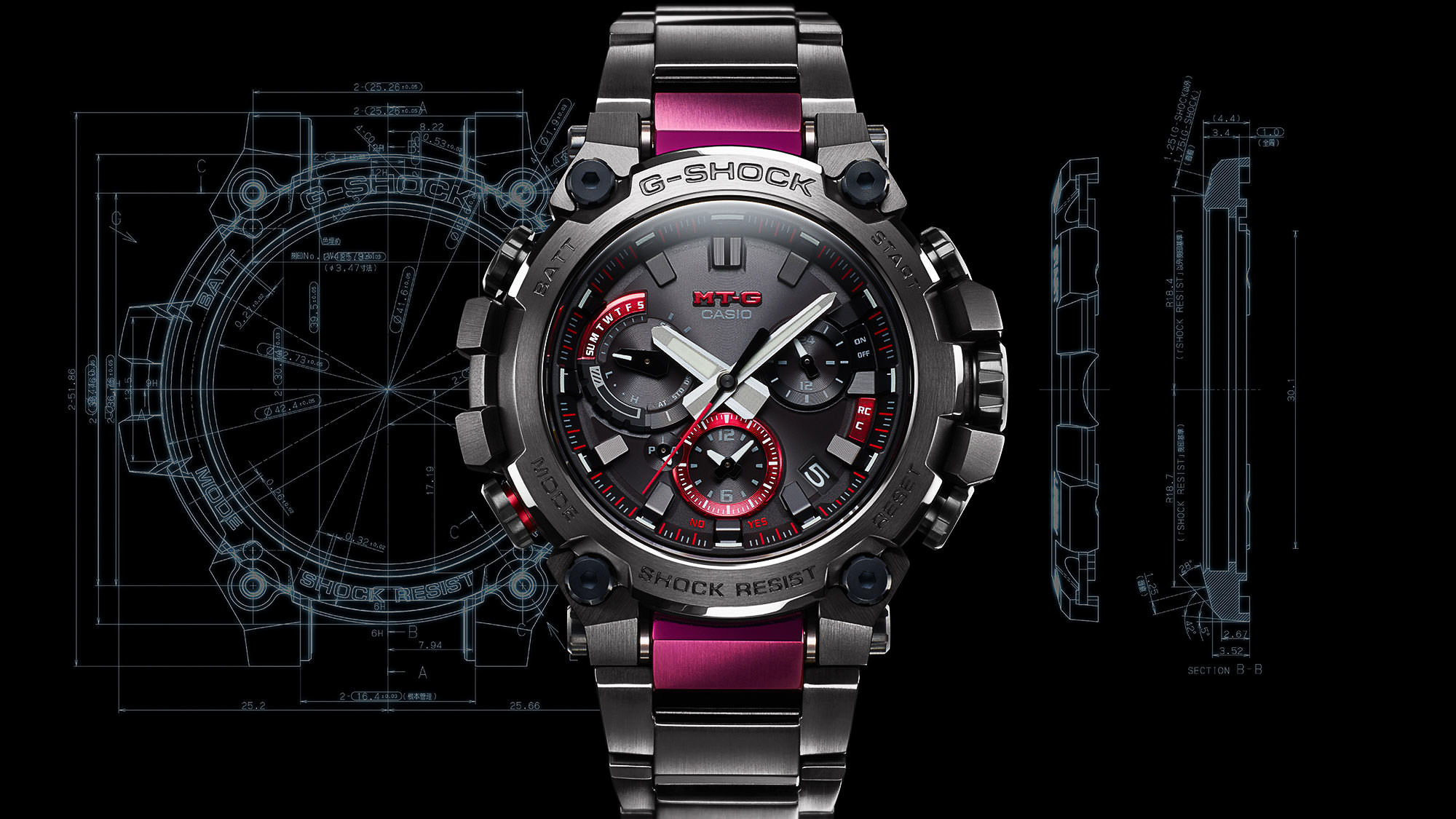 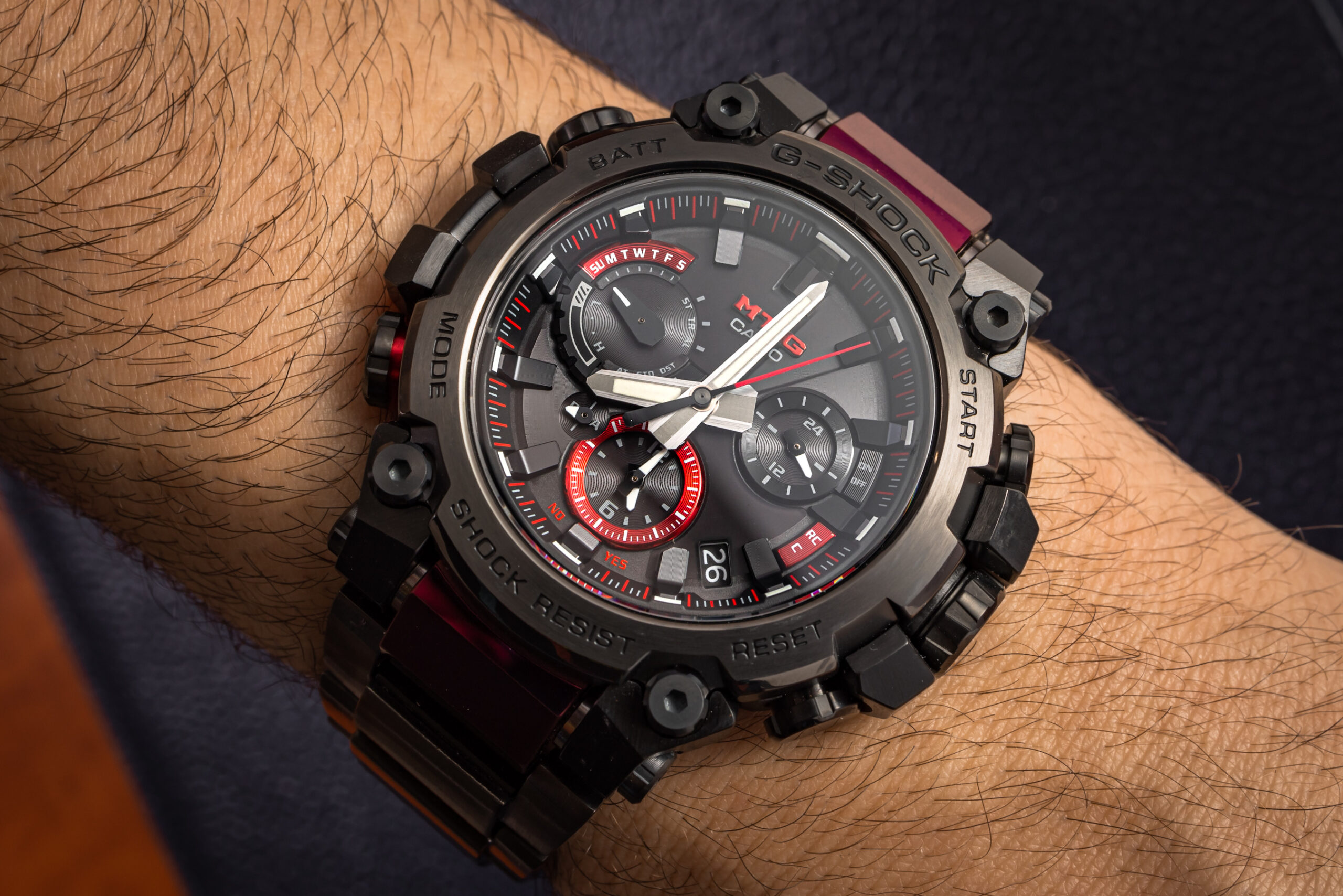 It’s been nearly 40 years since G-Shock inventor Kikuo Ibe revolutionized the tool watch category, testing the indestructible properties of his then-new prototype by tossing it out a second-story bathroom window at Casio’s Tokyo headquarters. Since then, the mighty G-Shock line has evolved into a dizzyingly broad spectrum of colorful offerings, each bristling with distinct capability. From the pioneering resin-cased references still on the wrists of military and first-responders worldwide to ultra-premium variants cast in semi-precious alloys and finished using fine watchmaking techniques preferred by only those in the know, G-Shock watches now cover the widest audience spectrum possible. And though leagues apart in materials and workmanship, they all adhere to the same principles governing the legendary dependability of any watch bearing the G-Shock name. 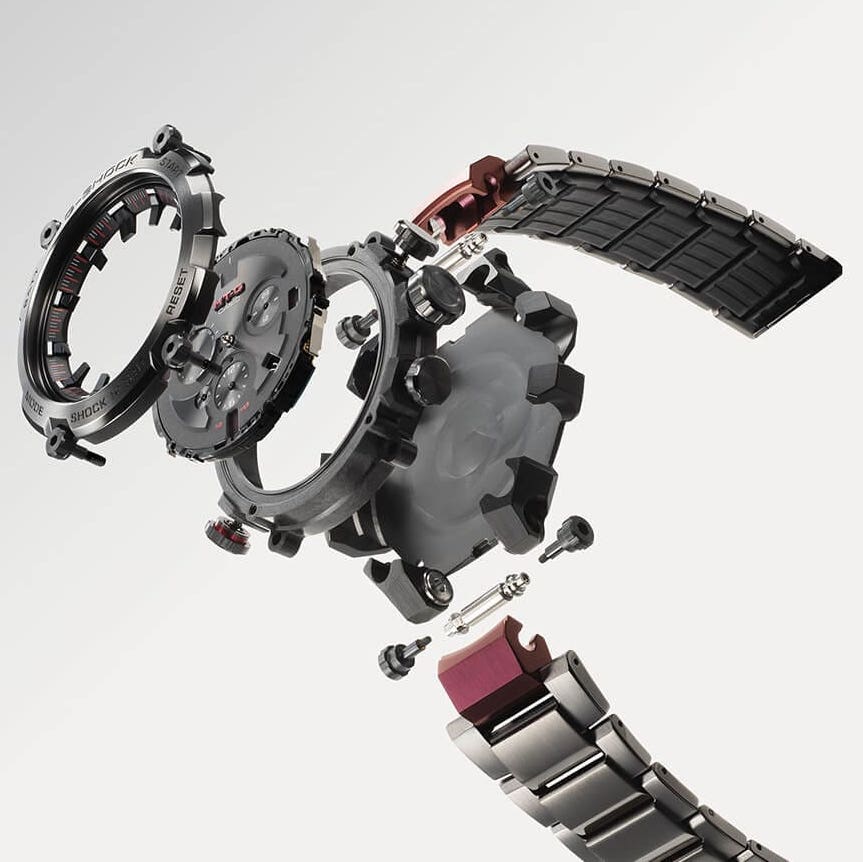 Manufactured on Casio’s hallowed Yamagata Factory production line (reserved only for Casio’s highest-end products like Oceanus and the MR-G references), the G-Shock MT-G collection sits just below the top of the range, which bears the MR-G designation (when spoken, these letters are spelled out individually, in G-Shock’s preferred nomenclature). That means MT-G is ostensibly G-Shock’s Johnny Walker Double Black — the “Sport Package,” if you will, where bold and experimental designs rule the day, using a compelling hybrid of metal, fine resin, and carbon, and bearing the brand’s latest technologies and innovations while retaining all of its key signatures. And in the case of G-Shock, that means 200 meters of water resistance, shock resistance, and full timekeeping autonomy anywhere in the world governed by long-range radio and Bluetooth connectivity and driven by solar power. 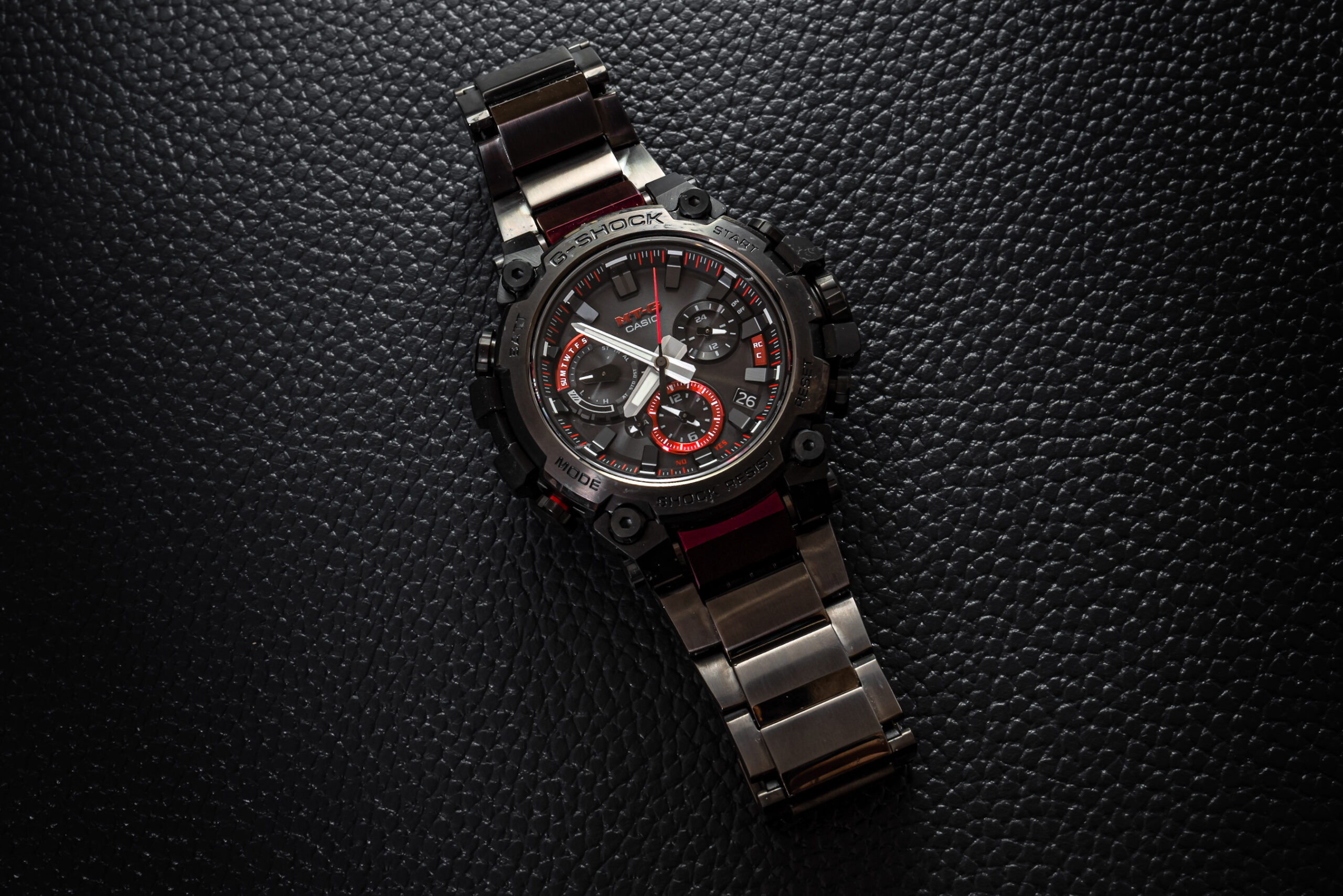 Cast in stainless steel and fitted with a special integrated fine resin bracelet, the MTG-B3000 is the newest addition to the premium MT-G collection, characterized by its highly refined touch points and an intricate visage of interlocking metal parts, from the high-contrast dial furniture and formidable bezel screws to facetted bracelet center-links. The watch is at once super-premium feeling and visually striking, but still somehow playful and even toy-like, thanks to its cheerful high-contrast IP-coated elements. Replacing the outgoing MTGB2000 series references, this new B3000 is built around an entirely new multi-function movement module, which re-orients the dial’s functions to a more traditional 3-6-9 layout and preserves the MT-G’s signature instrumental look but ultimately produces a dramatically more streamlined product that’s not only easier to read, but one that also sits lower and more comfortably on the wrist. In fact, at only 12mm-thick, it’s actually the brand’s thinnest MT-G reference to date — and given the amount of complexity at work here between the bezel and the newly shaped 3D caseback (which also happens to form the crown and button guards on the side of the case), that’s no small feat. 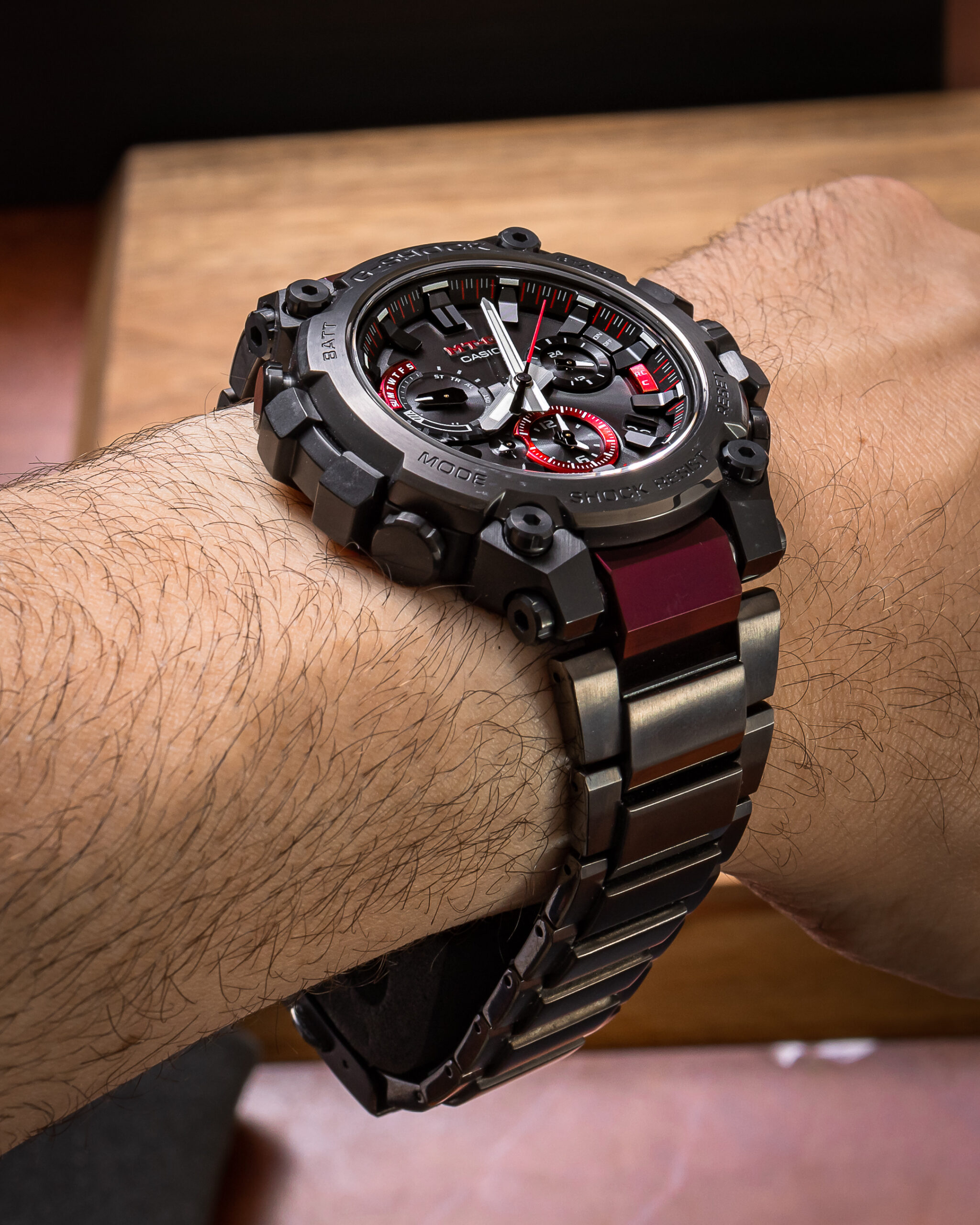 There’s no getting around the fact that this is a big watch, measuring nearly 51mm in diameter from the facetted button guards of the case at 9:00 to the tip of the crown at 3:00, but perhaps the most important measurement here is actually the lug-to-lug width, which spans only 51.9mm and terminates in an integrated bracelet that drops straight down from the attachment screws at the case. This essentially means that the B3000 still remains a remarkably compelling, yet comfortable choice for any wrist craving something with a little more substance. Further aiding in that comfort is the surprisingly light but stout bracelet itself, which is constructed from G-Shock’s traditional lightweight fine resin and reinforced throughout with hollow stainless steel cores for each of the links. Urethane “pads” on the clasp keep the metal picking up “desk-diving” marks in a traditionally scratch-prone location. Another thoughtful touch is the bracelet attachment point, which is now fixed via a two-button quick-release system, enabling the wearer to switch between the bracelet and G-Shock’s excellent MT-G series integrated rubber straps with ease. 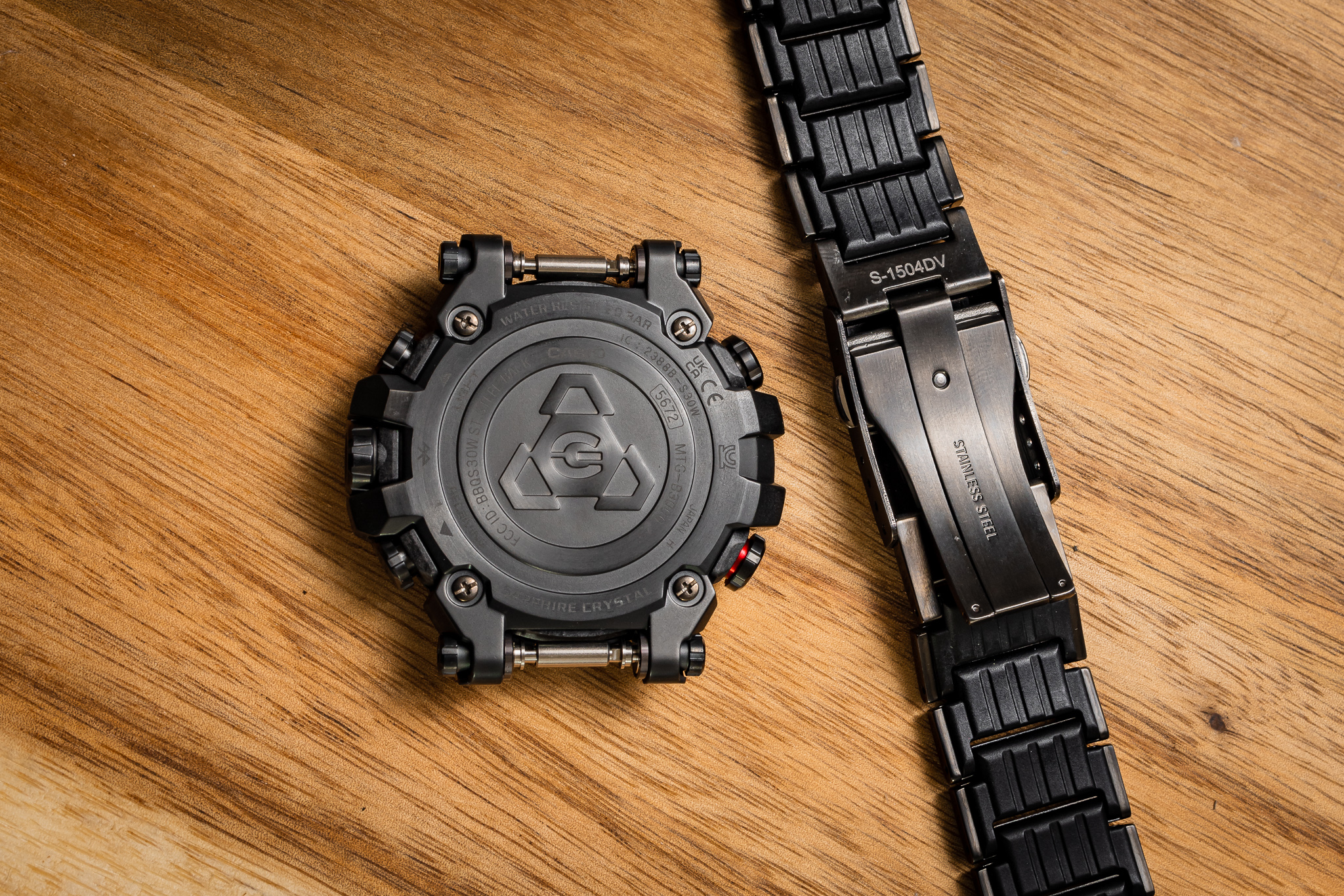 At its very center, protected by Casio’s own Dual Core Guard structure and Triple G resist, the svelte new “Tough Solar” movement might be thinner than that belonging to its predecessor, but the core functions are all still here: dual time (with 27 timezones in its memory), a countdown timer, chronograph, multiple alarms, and a full auto calendar to 2099. Using the new CASIO Watches G-Shock app and a Bluetooth link, you can pair the watch to your phone and the watch will automatically synch upon arrival in a new time zone (the Bluetooth link isn’t necessary for full autonomous timekeeping, though it is a bit faster than the radio-controlled timekeeping and a neat feature to have). 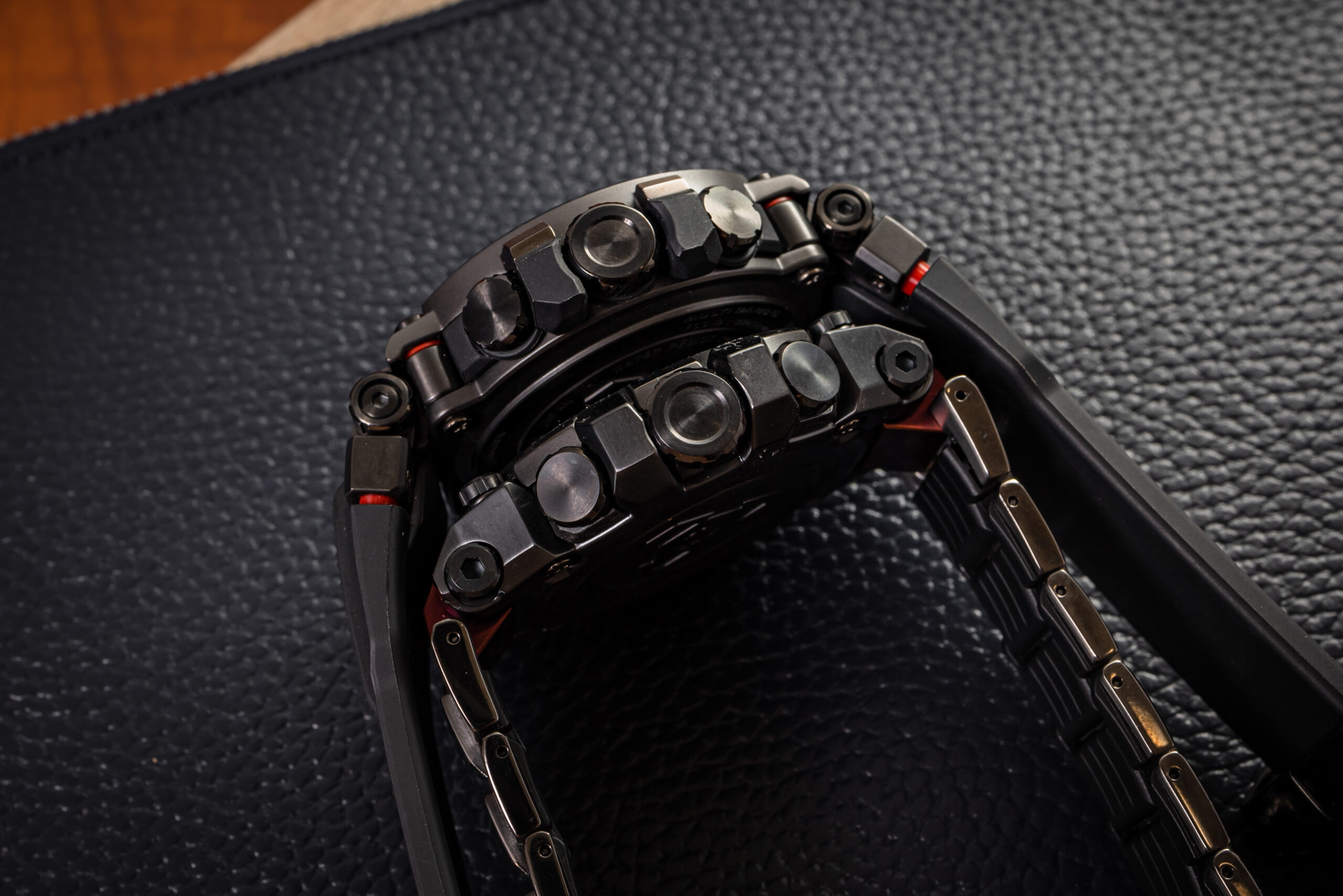 Note the difference in thickness and strap attachment points between the outgoing B2000 reference (top) and the newer B3000 reference (bottom).

Two millimeters is the net reduction in thickness between the new B3000 and the older B2000 models — on paper, little more than an afterthought. But on wrist, the difference is dramatic. Particularly because “compact” has never traditionally been a word often used in the G-Shock vernacular — especially in the MT-G and MR-G collections. These are, after all, purpose-built watches, carefully engineered to maintain exacting timekeeping standards even in the harshest environments that Mother Nature could dream up. But the new MTGB3000 brings an added layer of refinement to the story through the use of color, material, and premium finishing — and one that should endear itself to a whole new fanbase looking to upgrade from the standard resin or metal-cased G-Shocks.

Available in three color options, the MTG-B3000 has a starting retail price of $950 on the rubber strap. The price for this reference MTG-B3000BD-1A on the resin bracelet is $1,050. You can learn more about the G-Shock MT-G collection over at gshock.casio.com.