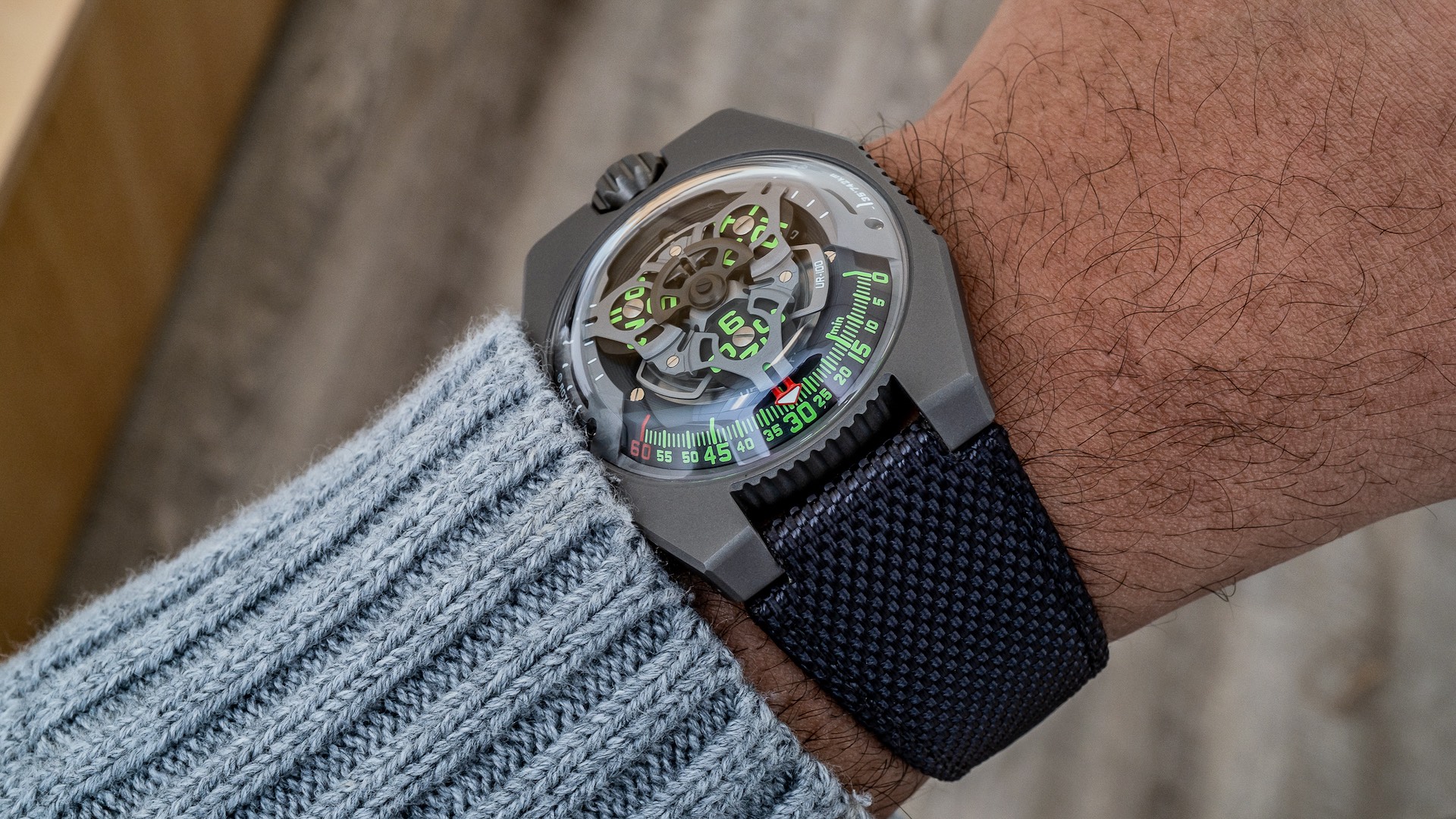 The Urwerk UR-100 SpaceTime watch was released a few months back in 2019, and the brand has now released a gunmetal version of its latest complication model. The surprisingly wearable 14mm-thick UR-100 SpaceTime was initially introduced in steel and titanium, though this new gunmetal edition looks a bit darker and more fitting. Urwerk dubbed this as the UR-100 as a nod back to the brand’s early days in the mid-1990s with its original watch, the UR-101/102. This Gunmetal model is the third edition of the UR-100 so far, each of which has been made in 25 pieces. Of note, the UR-100 is something of an entry level model for the brand at under $50,000. 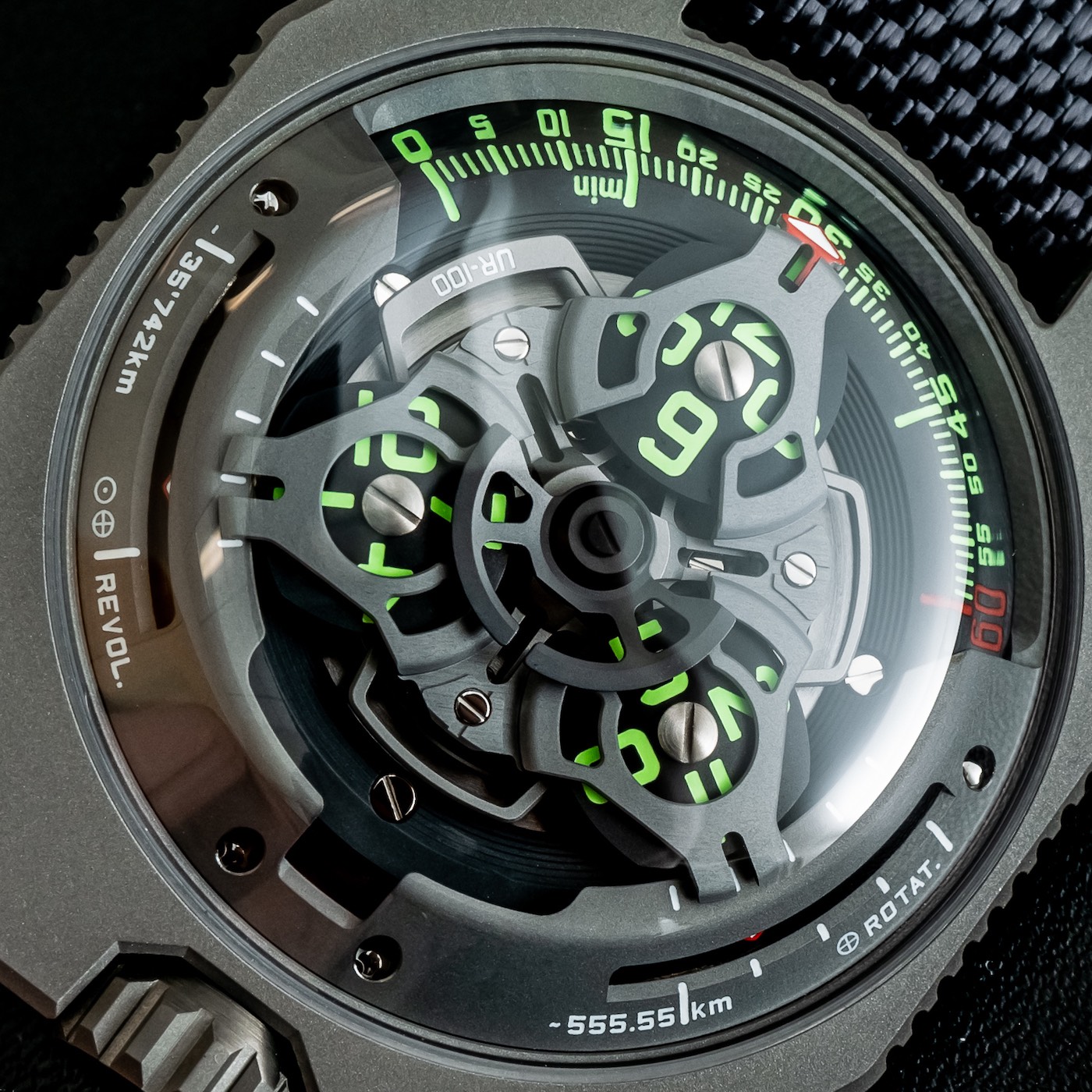 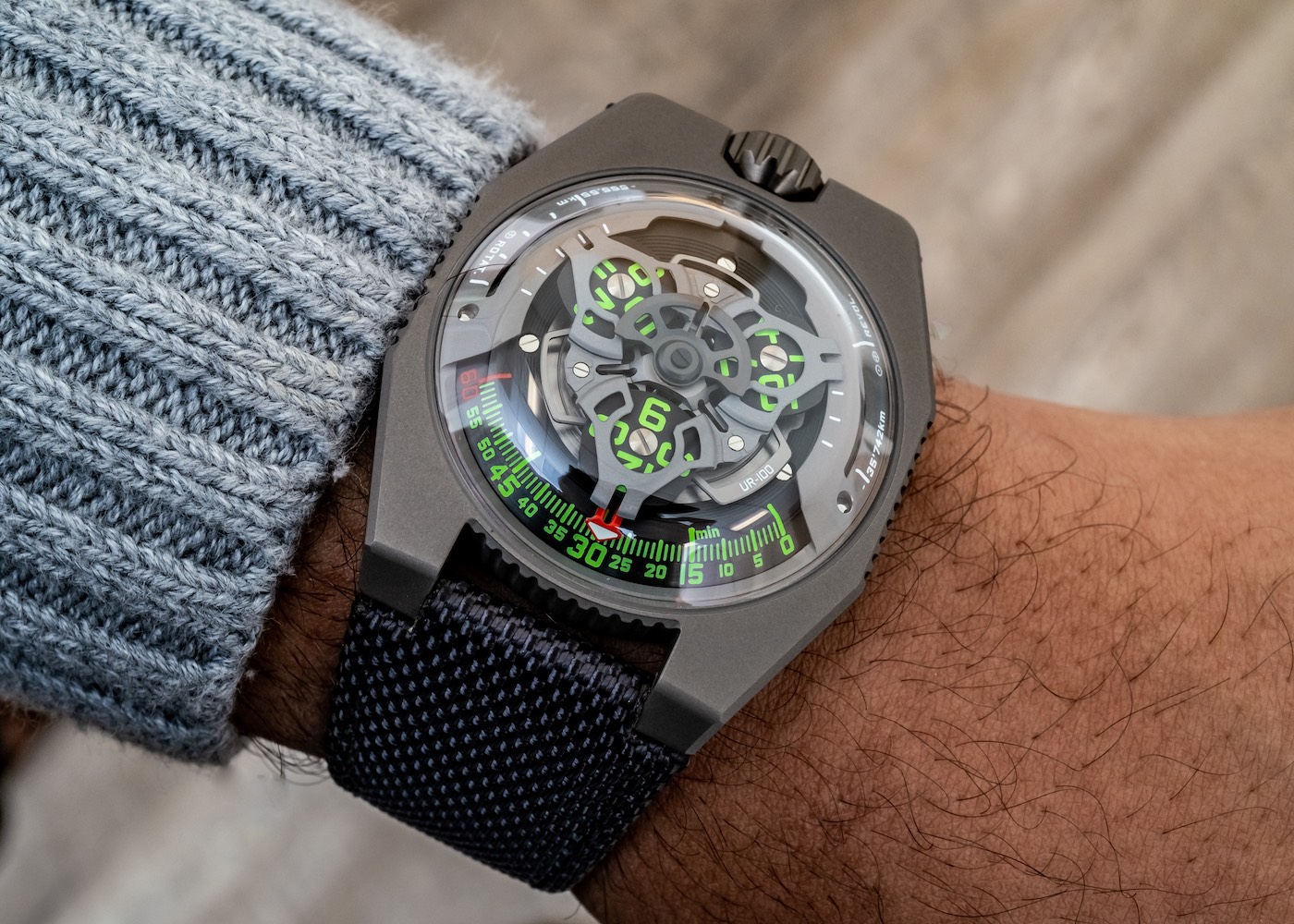 So, what is SpaceTime, exactly? Well, the standard time is told via the “usual” satellite time display (the Urwerk take on a wandering hours mechanism) with arrow pointing to minutes and hour on satellite display. With three red-tipped arrows in total, the SpaceTime has two functions that can be read on either sides of the case at 10 and 2 o’clock. When the minute hand makes the full 60-minute path, it actually jumps over to the 10 o’clock cut-out register, which tells the the distance (in kilometers) traveled on earth as it spins on its axis at the equator. This is is shown via the 20-minute scale that measures 555 kilometers. Across the case at 2 o’clock is another 20-minute scale that measures the journey of the earth around the sun in that time, which is 35,740 kilometers. 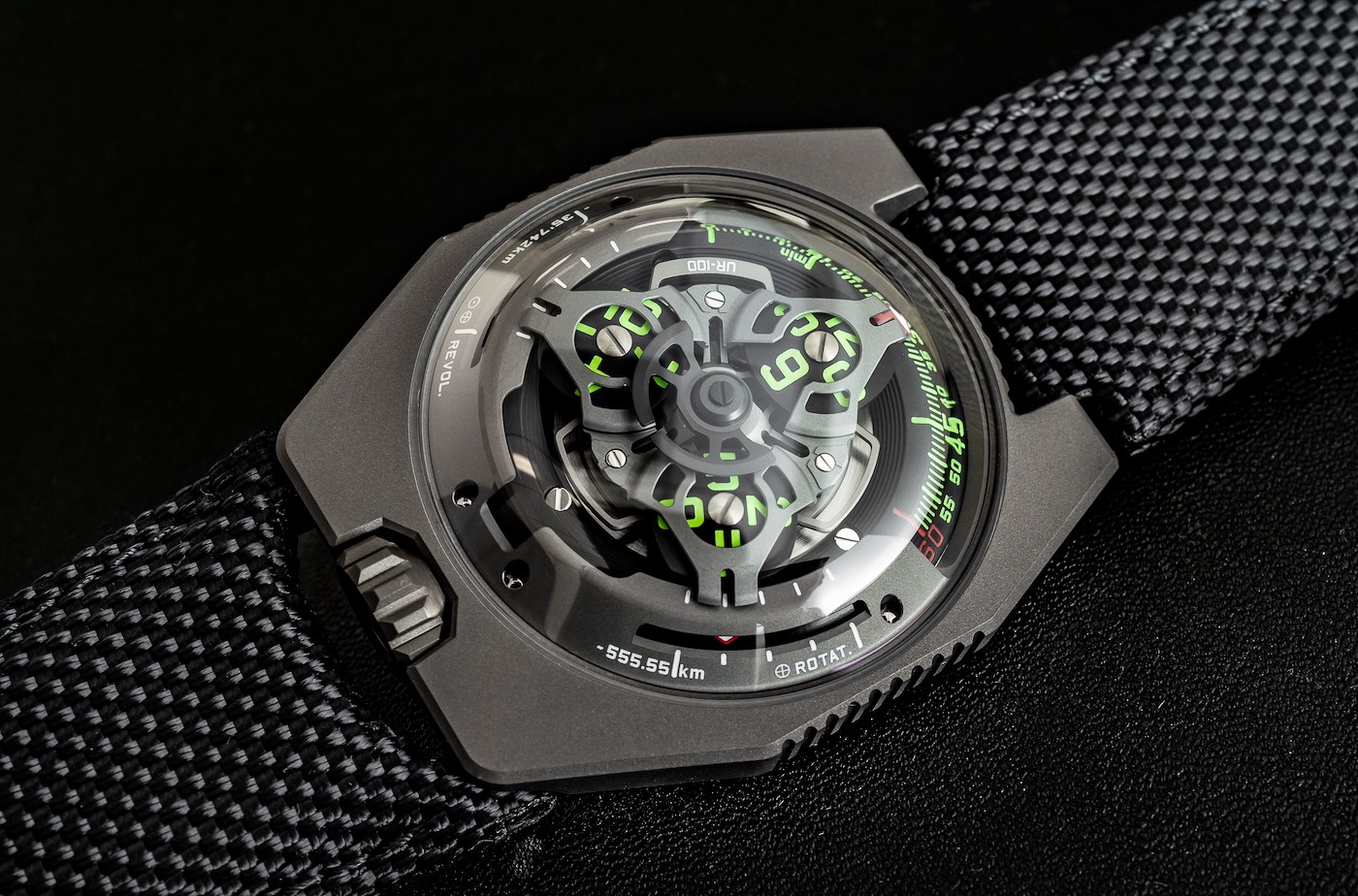 While not really practical or revolutionary when you consider how they operate in 20-minute increments, the SpaceTime complications are fun without being over-the-top, which is quite something given that we’re talking about an Urwerk. Still, it’s true. The SpaceTime registers are thin with small white text. The relatively slim case and the (restrained for Urwerk) avant-garde design actually makes for one of the most wearable Urwerks in recent memory. This may not be how everyone feels, though. In fact, when David Bredan reviewed the UR-105 Kryptonite (another favorite of mine), he wrote:

“…Urwerk has, it seems to me, gotten to a point where it felt like it should make a watch for the mature collector of the brand and/or other crazy watches. Don’t get me wrong, I agree that in images the UR-105 Kryptonite looks as awesome as an SR-71 Blackbird, but in reality – and yet more so on the wrist on an average day running errands in the city – it is as stealthy as a black slab with some slats on it can be (pretty discreet, that is). And that, to me, at first is sort of like missing the point. It’s like a quiet Ferrari.” 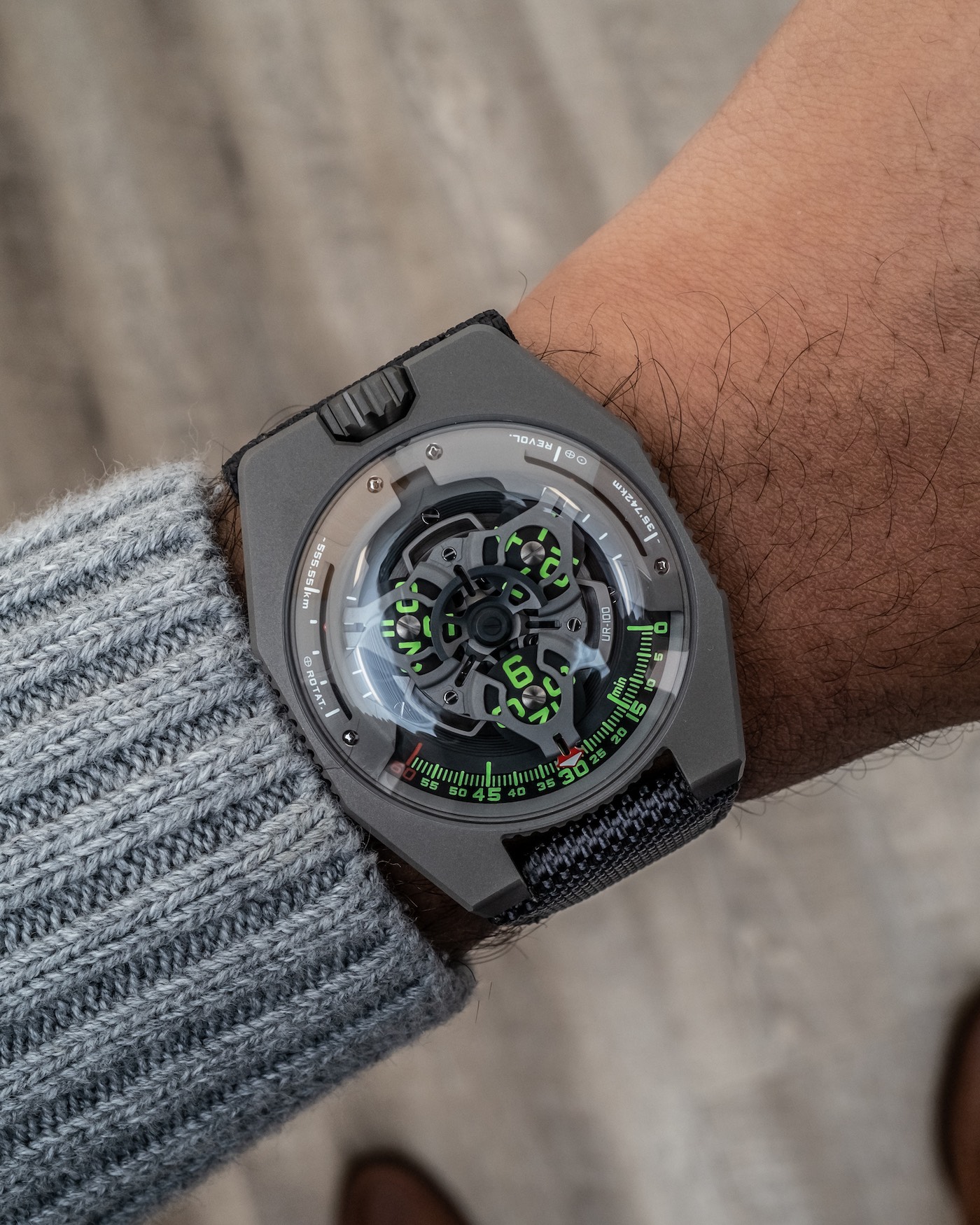 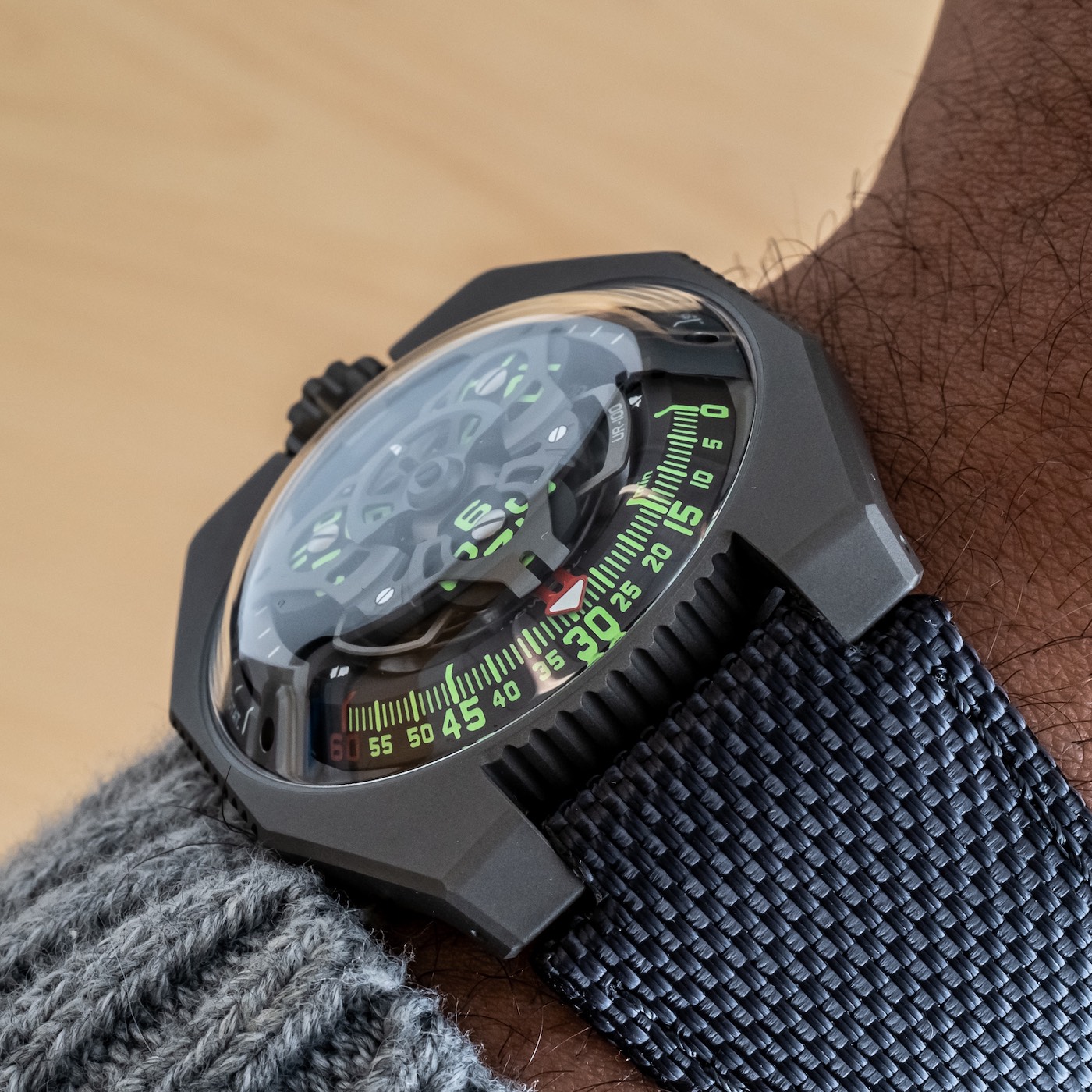 The case measures 41mm-wide, 49.7mm lug-to-lug, and 14mm-thick, which make for dimensions that only add to my point about wearability. The bubbled sapphire dome crystal is a throwback too the early Urwerk models and works well with the red-pointed arrows that curve downward, as well. I am a big fan of the Gunmetal case with its matte sandblasted finish. It just looks right. 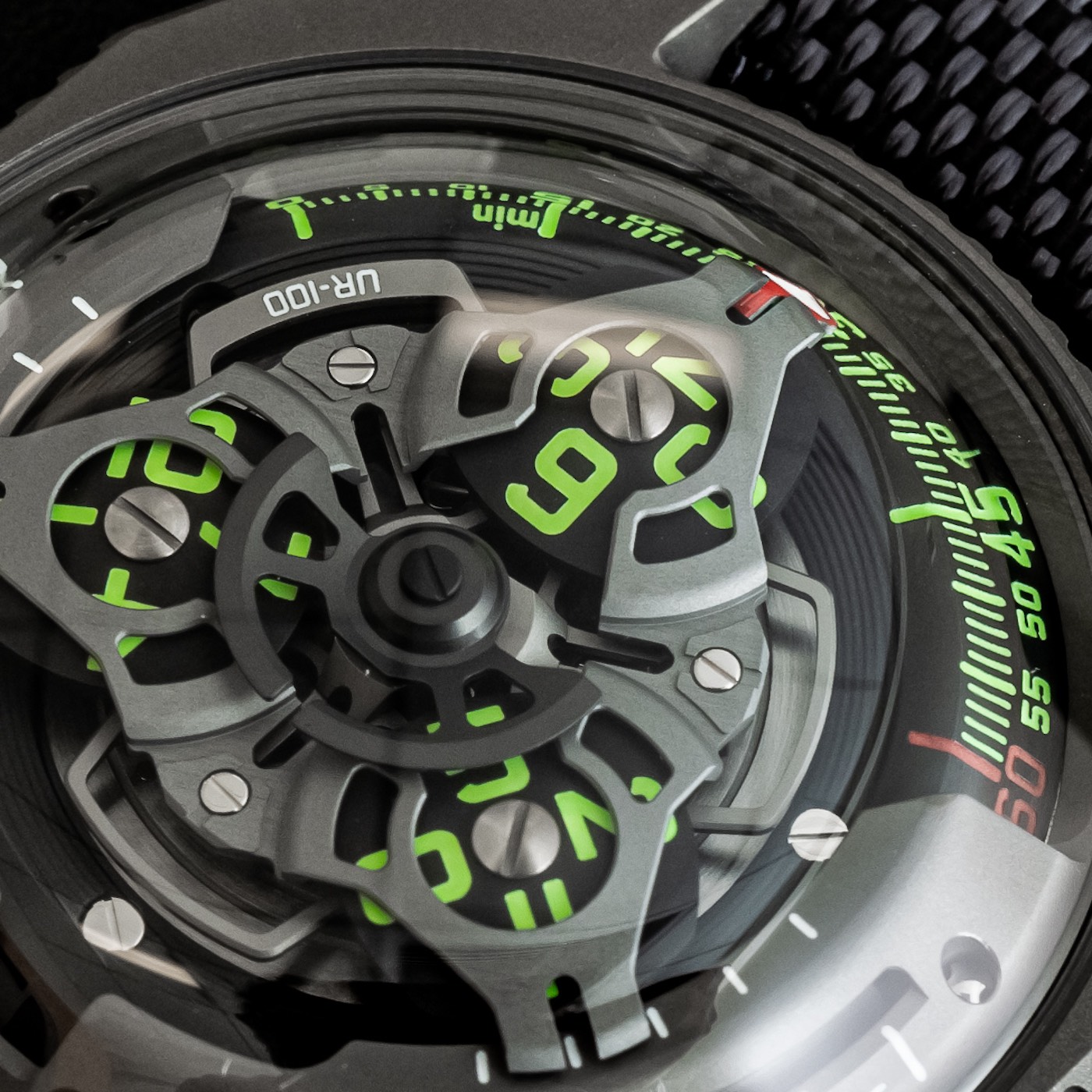 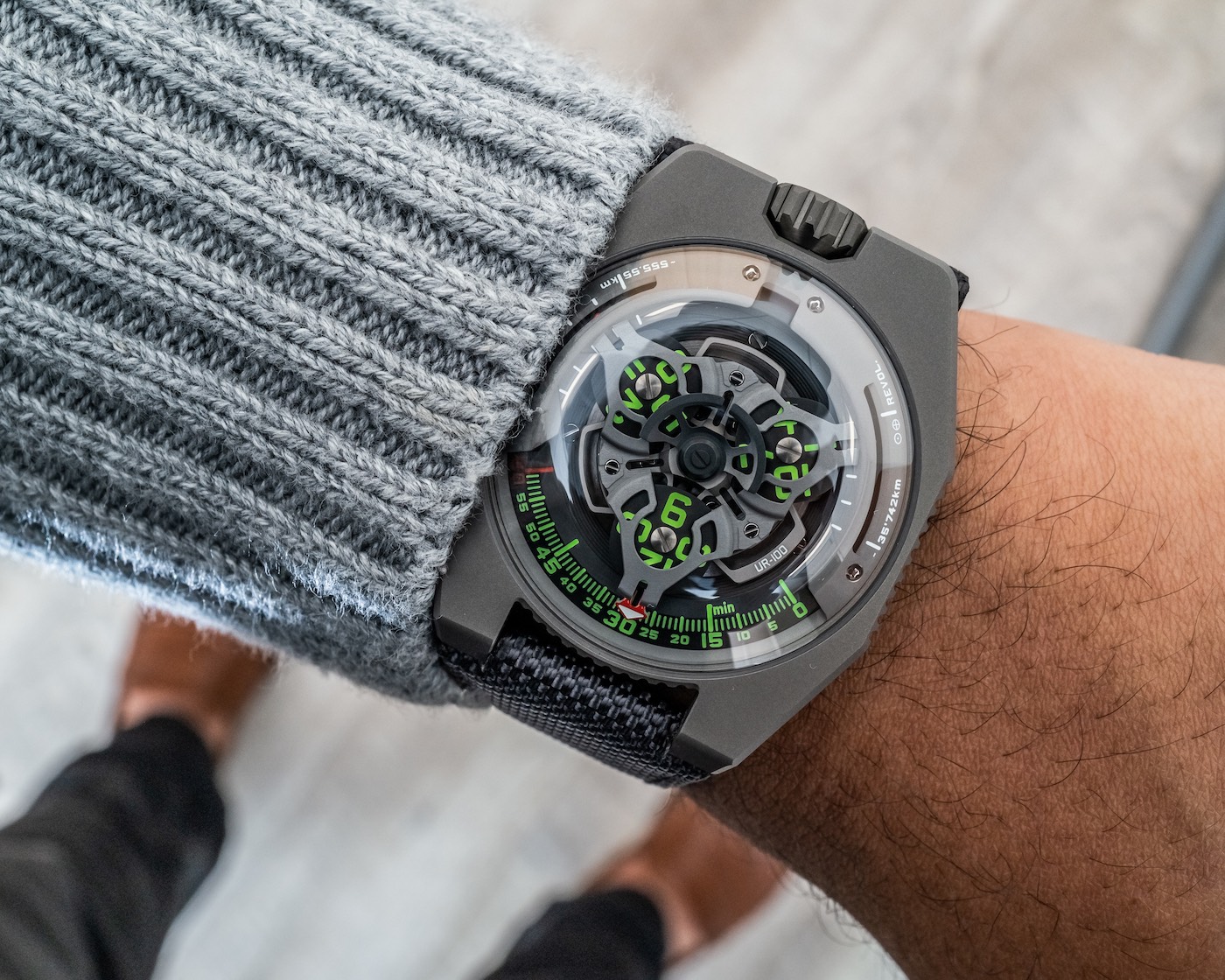 The UR-100 shows off what is one of the more interesting parts of its movement by exposing the pyramid-shaped hour displays via the aluminum three-arm carousel. This could hinder the ease of reading the time, but the hours not in use are covered by the added architectural bridges. According to Urwerk, it took two years of R&D to design the UR-100. 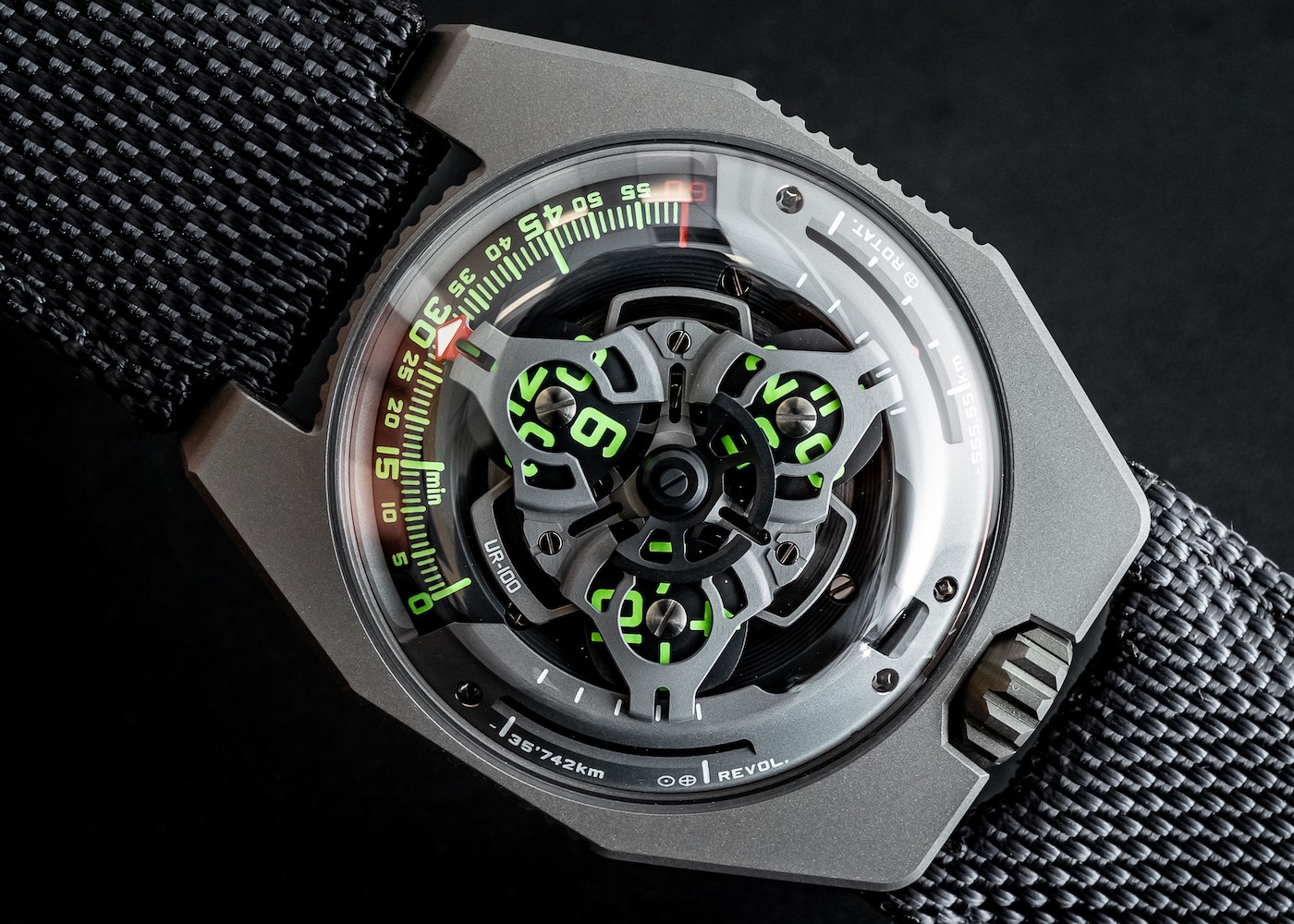 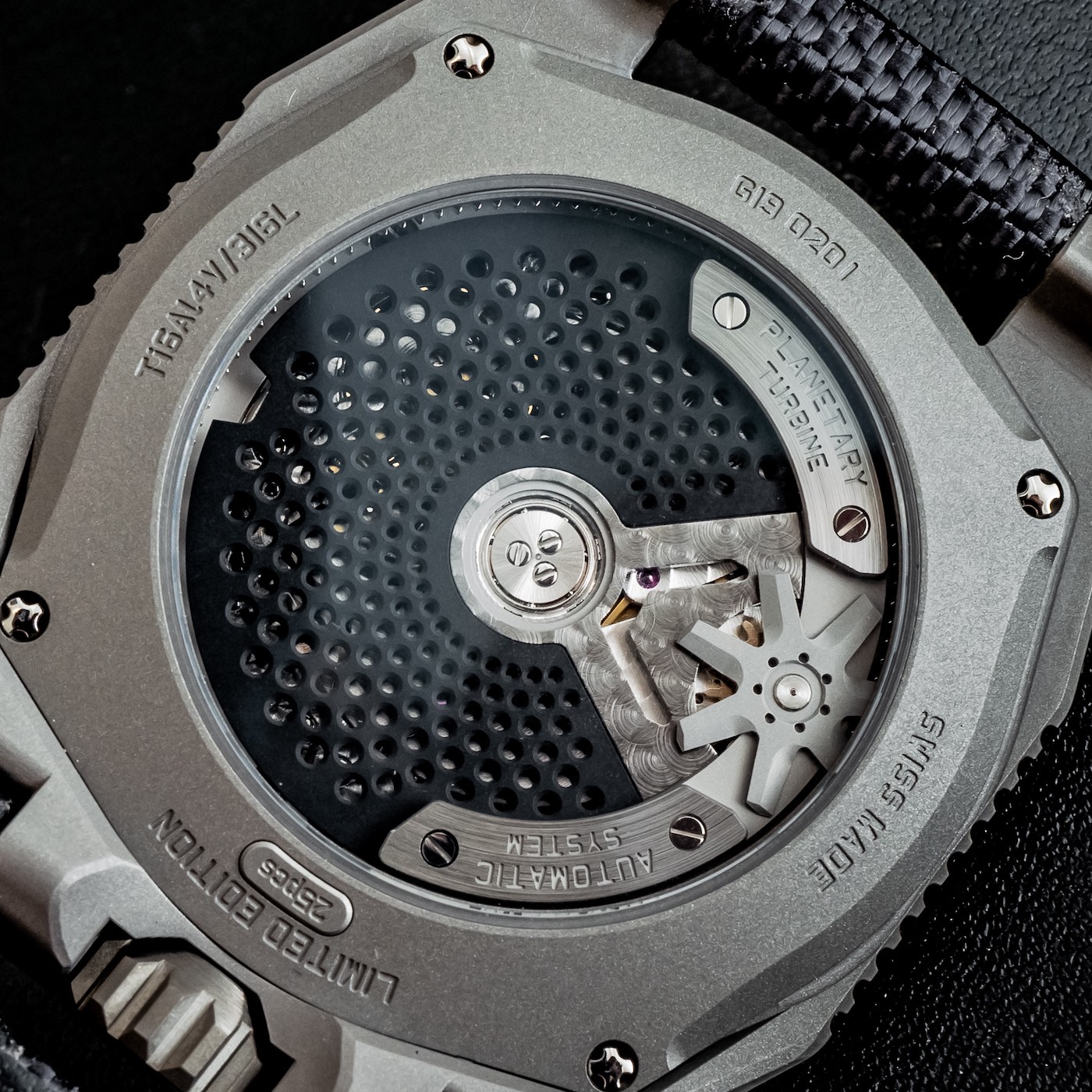 Inside is the Urwerk Caliber 12.01 movement, which utilizes a “planetary flat turbine” system that also goes by Windfäng, or “air trap.” This is a shock-reduction system that becomes clear when looking at the caseback, which reveals the large rotor with drilled holes that is regulated by this turbine. In addition, the baseplates are done in the anti-magnetic alloy ARCAP, which is a feature Urwerk uses regularly. The caliber 12.01 operates at 28,800 vph and has a 48-hour power reserve. 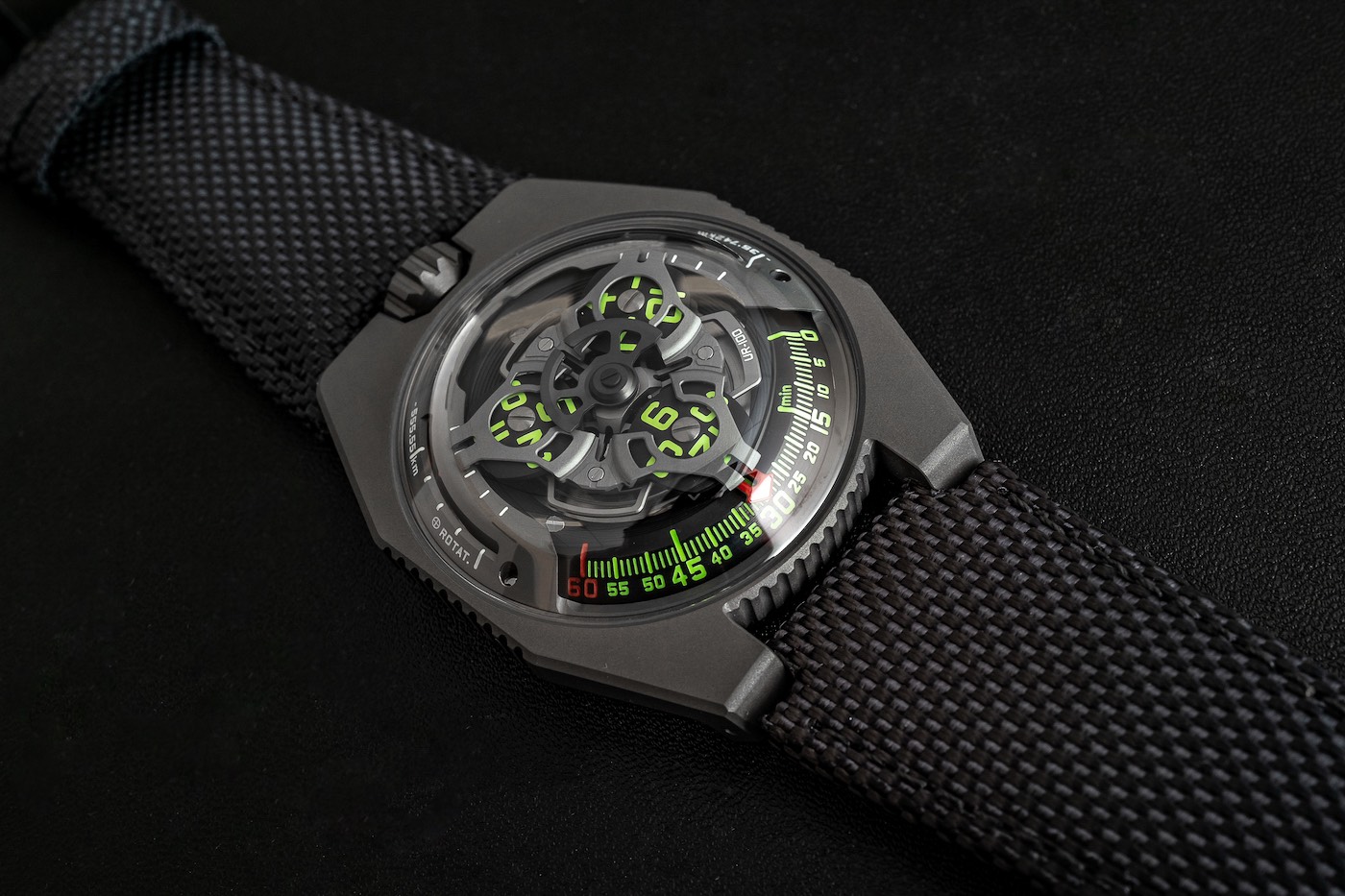 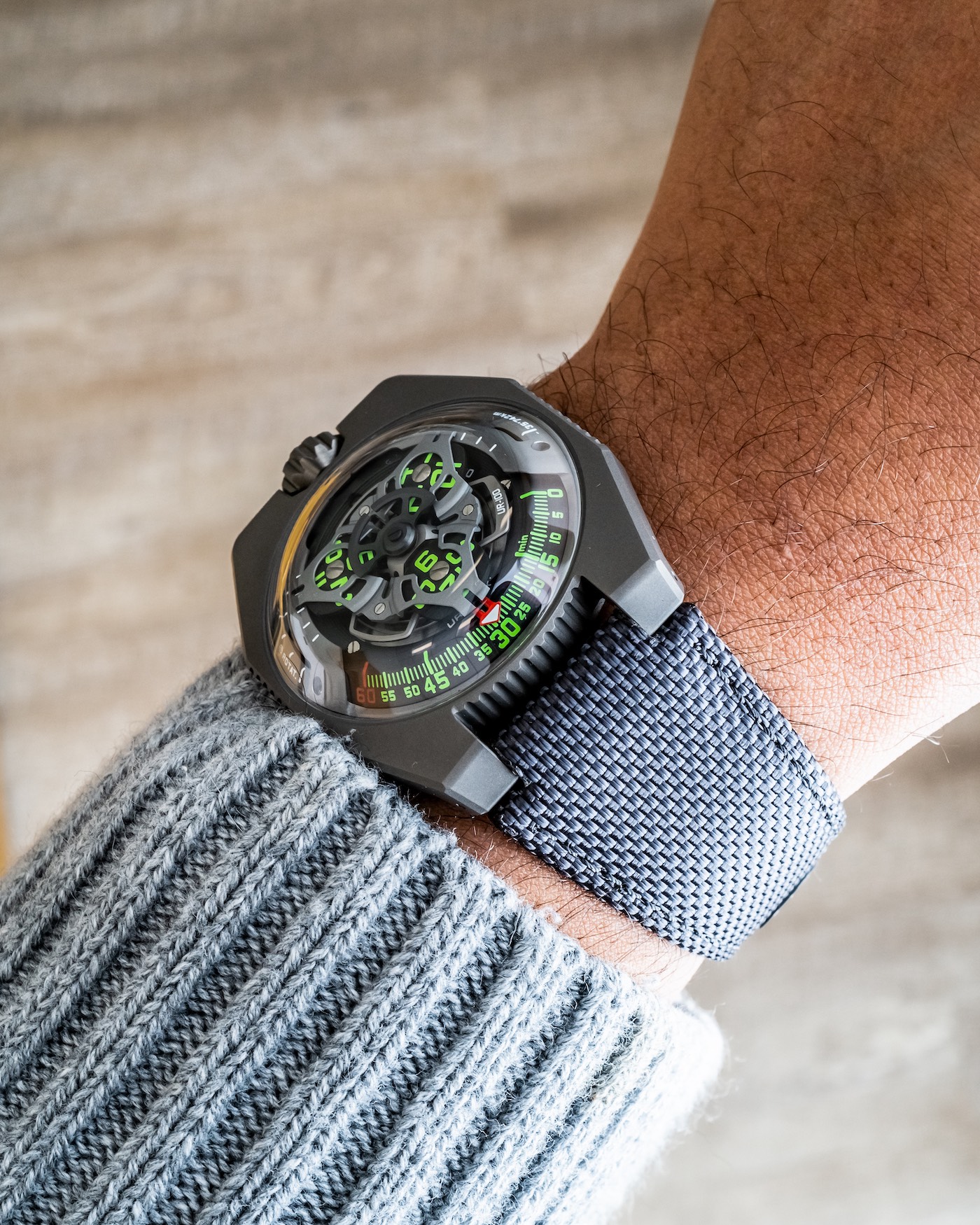 The Urwerk UR-100 SpaceTime in Gunmetal is a compelling watch for reasons beyond the fun addition of the SpaceTime complications. I wasn’t prepared for those reasons being about practicality when considering the brand, but here we are. The wearable proportions, avant-garde design that has Urwerk DNA but isn’t as “out there” as models like the EMC Time Hunter or UR-T8, and mid-five-figure price point make for a package that will appeal to many both theoretically and in terms of an actual purchase. Considering it’s limited to 25 pieces, I will venture to say there will be more people interested than available watches. The Urwerk UR-100 SpaceTime Gunmetal watch is priced at $49,000.  You can learn more at urwerk.com.