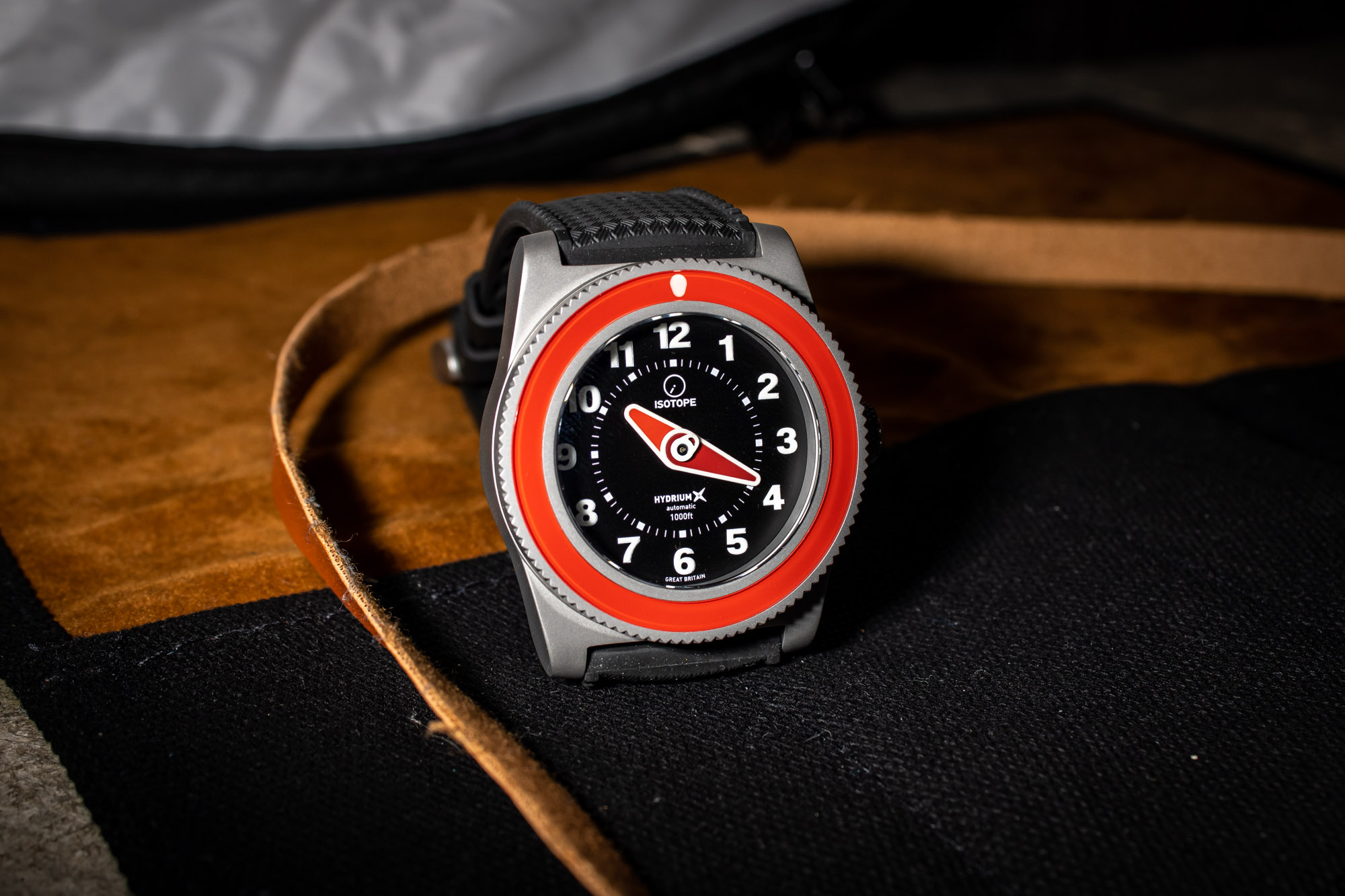 Last year, when Isotope announced the original HydriumX “Will Return” watch, I was a big fan of the model, simply because it drew its aesthetic inspiration from the ubiquitous red, white, and blue signs that can be found hanging on the doors and windows of shops all around the world. However, given that the watch was a limited edition of only 100 examples, I never had a chance to spend any significant amount of time with one, and I ultimately wasn’t sure if I actually liked the design itself, or if I was a fan of the watch simply because of its fun appearance and the fact that it reminds me of the old antique store that used to be by my parents’ house, which is where I first encountered the sign, as it seemed to perpetually be hanging in the window. That said, when the opportunity presented itself to spend some time with the new Isotope HydriumX “The Judge” that offers the same funky dive watch design in a fresh new colorway, I jumped at the opportunity to see if I actually loved the HydriumX itself, and, more importantly, if it’s bold and unusual appearance is actually something that works in my everyday life. 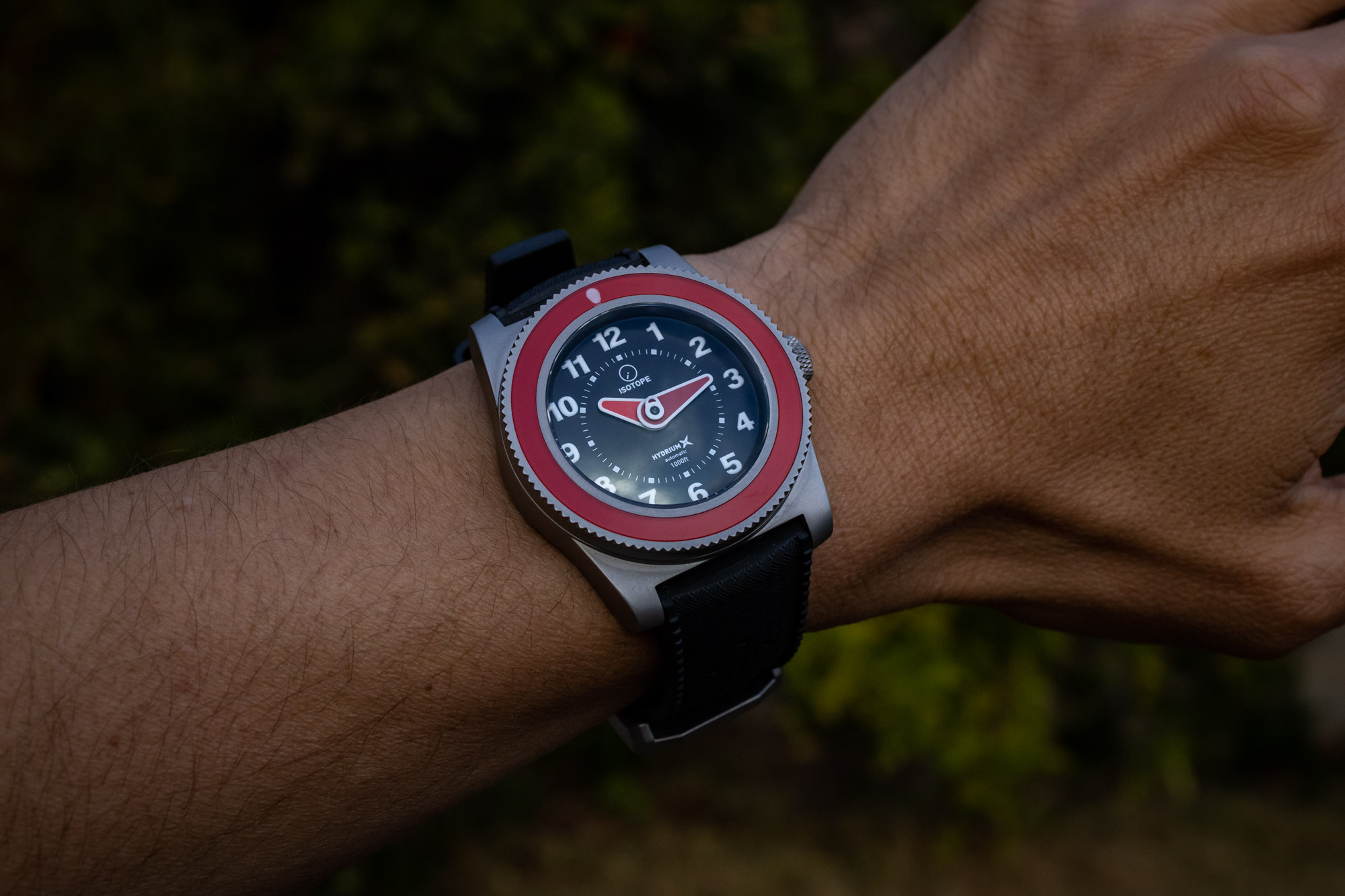 Technically speaking, “The Judge” is the third version of the HydriumX that Isotope has put forward. The “Will Return” was the first, and it was followed by the “Blink,” which embraced a blue and pink colorway to draw attention to the fact that watches are inherently unisex objects by combining two colors that have traditionally been used to represent each gender. As the third edition in the Isotope HydriumX series, “The Judge” offers the same core design as its two predecessors, but this time it features a black, red, and white color profile that is inspired by the traditional robes worn by judges in the UK. While my family briefly lived in London when I was a small child, I never found myself in front of a judge, and none of my more recent trips through the UK as an adult have landed me in court either (yet), so I have zero point of reference or a connection to the inspiration behind this particular model. But I think the watch itself looks fantastic, and the darker, slightly more austere colorway makes “The Judge” arguably the most paired-back and aesthetically versatile version of the HydriumX that Isotope has produced thus far. 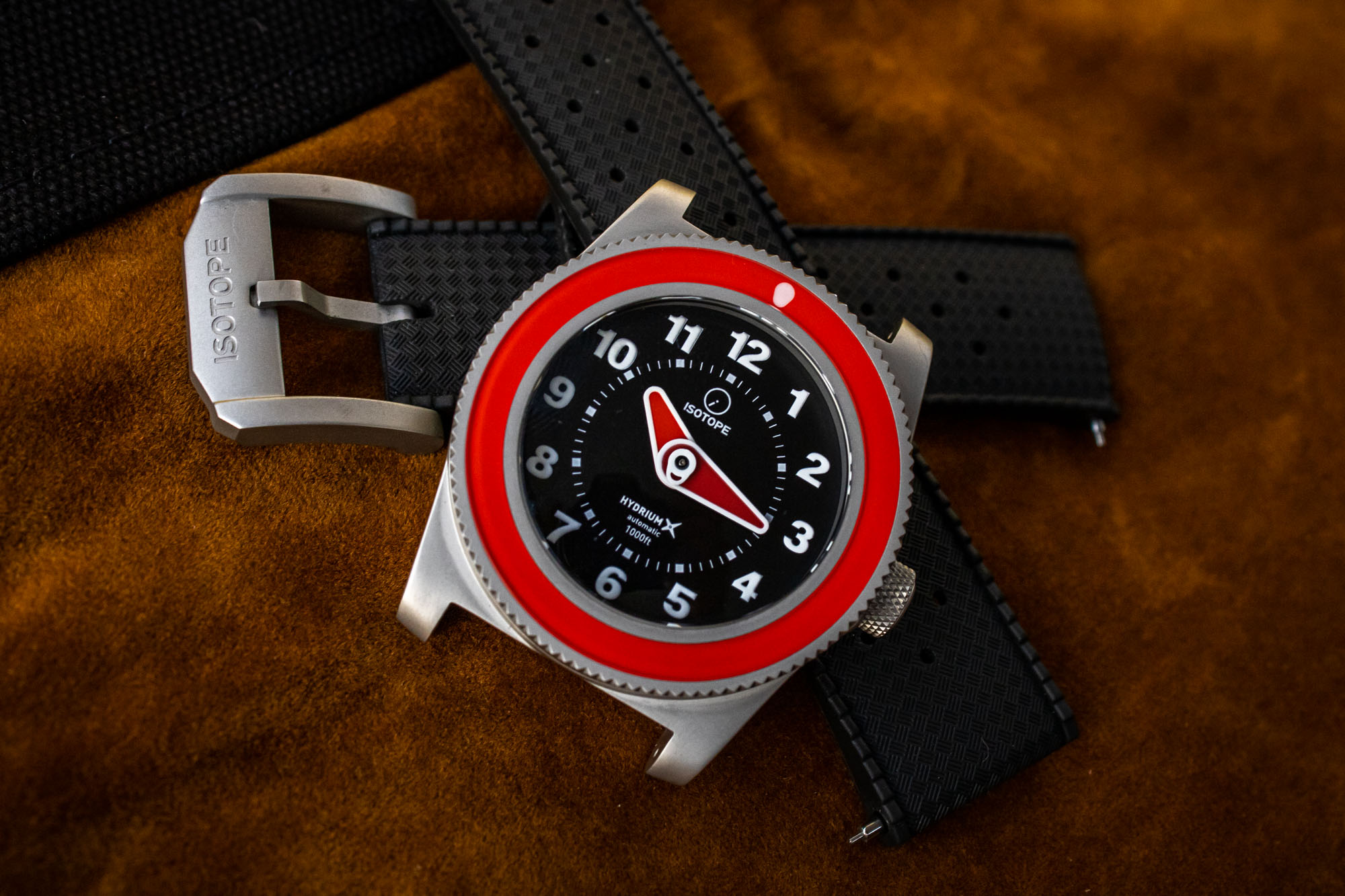 The case of “The Judge” is virtually identical to its two HydriumX predecessors, and it features a chunky and rounded design that is constructed from 316L stainless steel with an entirely micro-blasted finish. The watch itself measures 40mm in diameter by 48mm lug-to-lug, with an overall thickness of 14.9mm, and this includes the double-domed sapphire crystal that sticks up above the edge of its case. The rounded lugs are positioned 22mm apart and they incorporate Isotope’s signature “Lacrima” (teardrop) shape into their side profile, while a set of small crown-guards offers protection for the knurled screw-down winding crown that is located at the 3 o’clock position and signed with Isotope’s logo in relief. While this may seem rather thick on paper, part of this is due to the domed crystal, and once you remove that from the equation, the actual case of the watch measures a much more manageable 12.9mm. Additionally, the short rounded shape of the lugs creates a surprisingly compact profile, and this allows the case to sit flush against the wrist, which further helps to minimize its height. While the Isotope HydriumX is by no means a thin watch, I personally didn’t notice it to wear all that much taller than something like a Seiko SKX diver, and I’m usually someone who complains about the thickness of certain sports watches due to the relatively flat shape of my wrist. 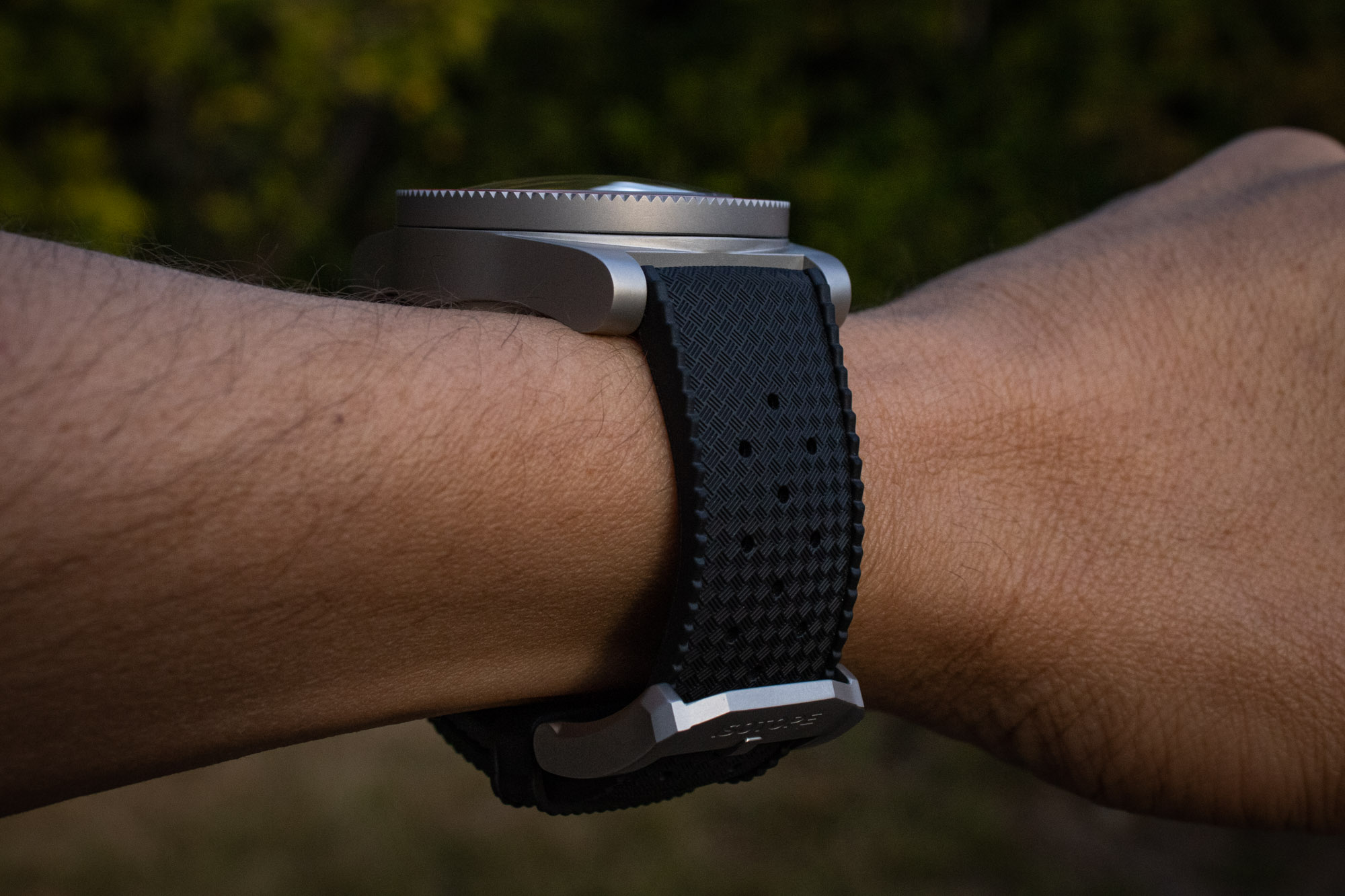 Surrounding the domed sapphire crystal is a 120-click unidirectional rotating bezel that moves with a firm smooth motion and features small serrations on its upper edge to provide users with an easy grip. Fitted to the bezel is a red sapphire insert that lacks any type of markings except for a small white luminous Lacrima shape to denote the zero-marker. While you won’t be doing any type of precise timing with this bezel, it does allow you to keep track of when you started an event, while simultaneously providing the watch with a fun and distinct appearance. Protecting the reverse side of “The Judge” and helping to provide it with 300 meters of water resistance is a screw-down display caseback, which features a clear sapphire window in the center, with the name of the watch and each one’s individual number out of 100 examples engraved around its perimeter. Just like previous editions, the Isotope HydriumX “The Judge” is completed by a tropic-style FKM rubber strap with a chunky signed pin buckle made from matching micro-blasted stainless steel. To compliment the overall color profile of the watch, the strap is black in color, and it can easily be switched out due to having quick-release pins where it connects to the lugs. Additionally, if you do choose to remove the strap, you will be greeted by the words, “Isotope” and “Hydrium” deeply engraved between the lugs on either side of the case. 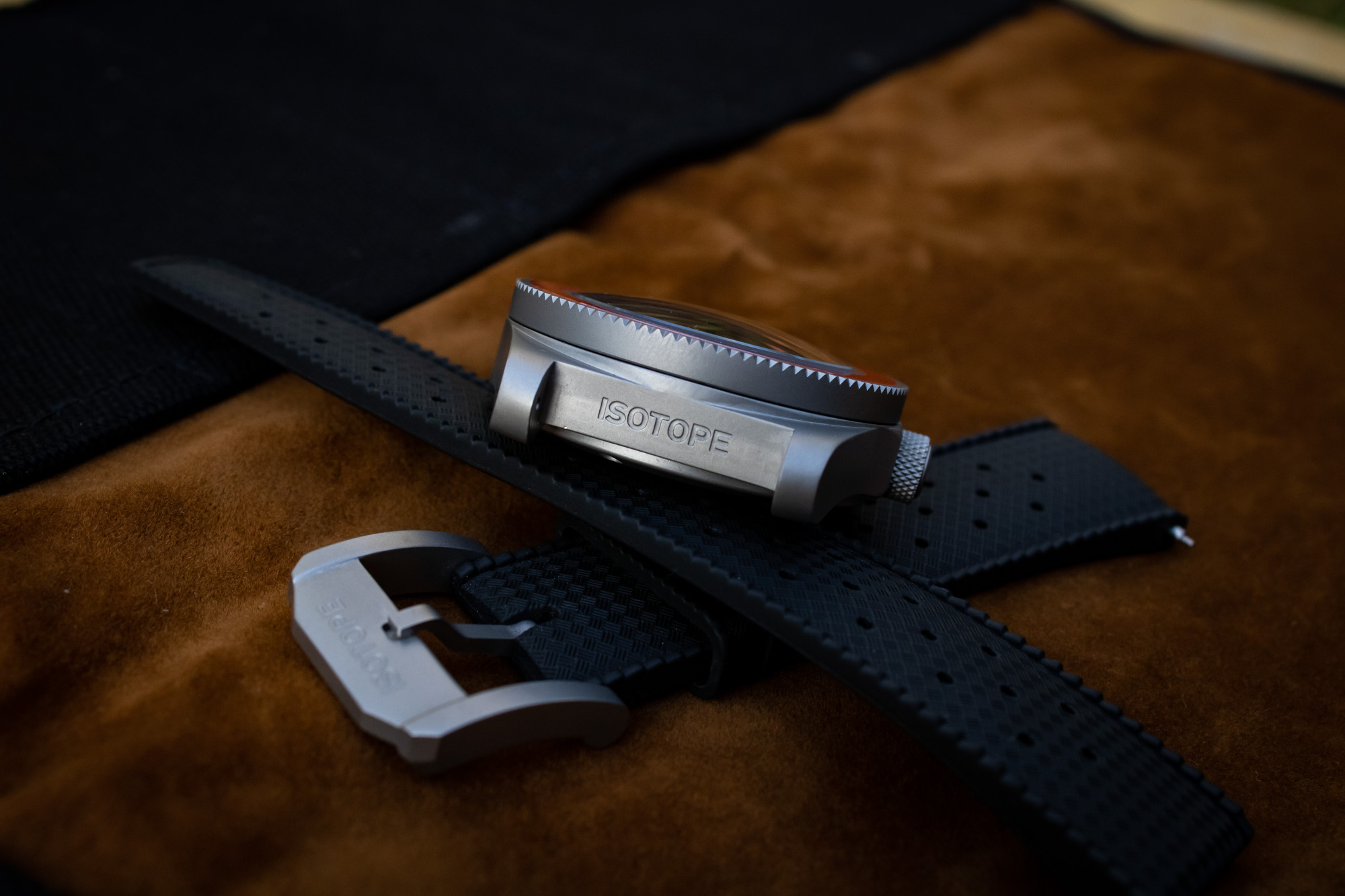 The black dial of “The Judge” is arguably the single greatest difference compared to the previous two Isotope HydriumX models, which both featured light-colored dials for a much brighter overall appearance. That said, the overall design of the dial is the exact same, right down to its large Arabic numeral hour markers, internal minute track, and the “Great Britain” signature at the very bottom, which appears directly below the 6 o’clock marker. While the original “Will Return” model offered a white luminous dial with black printing, the dial fitted to “The Judge” is black with white Super-LumiNova hour markers, making it essentially the inverted version of the original. Conversely, the red handset with luminous white outlines is carried over directly from the original “Will Return” model, complete with the small Isotope logo in the center that functions as a running seconds indicator. Although precisely measuring seconds is virtually impossible with this design, one benefit is that you don’t really need to wait until the seconds hand reaches the 12 o’clock marker if you want to set the time. I more-or-less treat the watch as a two-handed model, and without even a date display to think about, setting one of Isotope’s HydriumX watches is a super-quick and easy process. 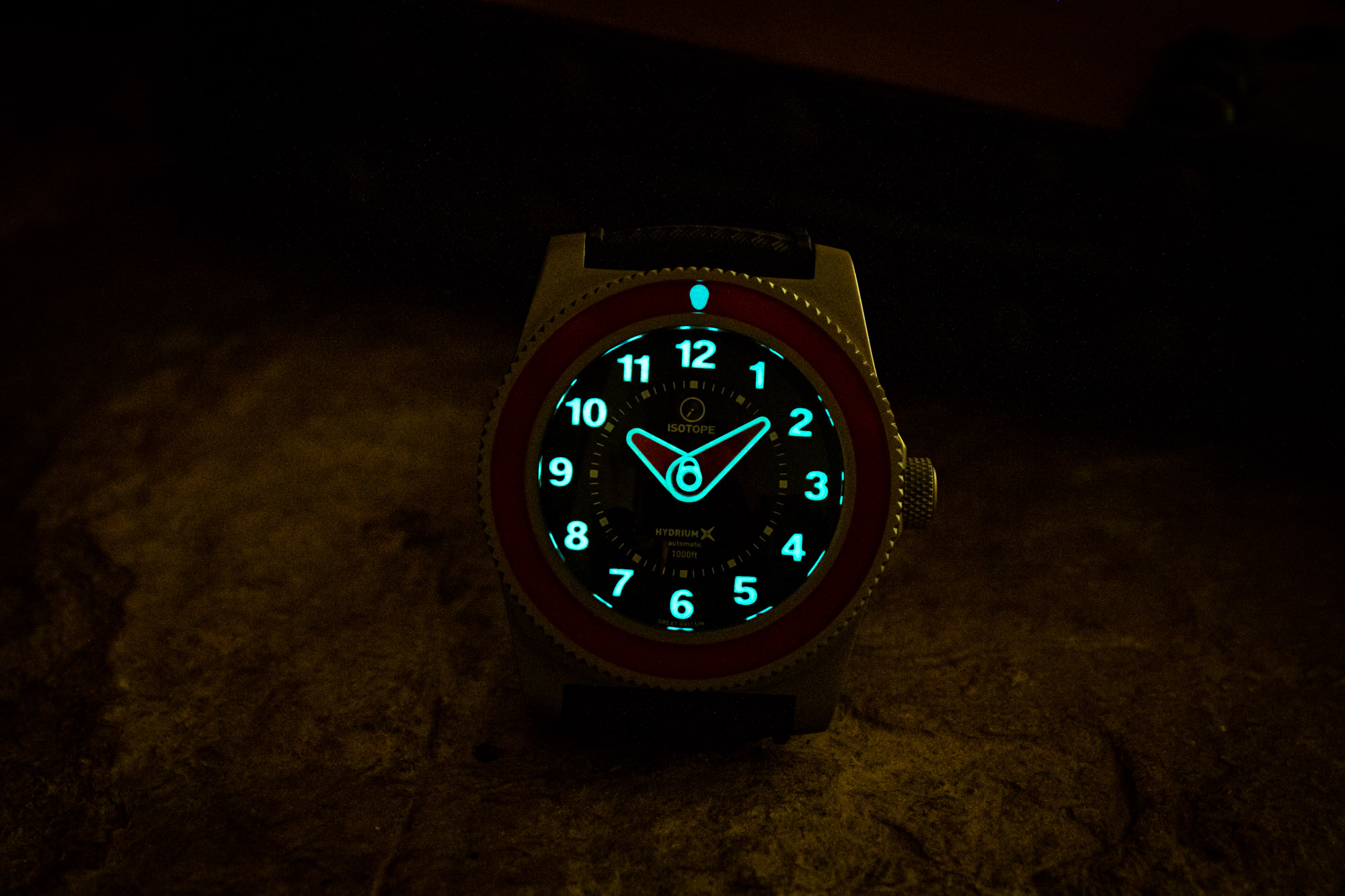 Like with previous models, powering the Isotope HydriumX “The Judge” is the Swiss Landeron 24 automatic movement, which sits on display through the watch’s exhibition-style caseback. Running at a frequency of 28,800vph (4 Hz) with a power reserve of approximately 40 hours, the 28-jewel Landeron 24 movement appears to largely be based upon the core design of the popular ETA 2824 or SW200, and this is supported by both its structure and its familiar performance specs. Rated to +/- 12 seconds per day, the Swiss Landeron 24 features more decoration than most movements that appear in watches at this price point, and it offers blued screws with perlage on the bridges and plates, plus a rotor adorned with Geneva stripes and the Isotope “Lacrima” logo. While I don’t have much personal experience with Landeron movements, timekeeping was better than its listed specs (although I wasn’t counting down to the exact second), and its common underlying architecture means that service and repairs should be easy and painless in the future. 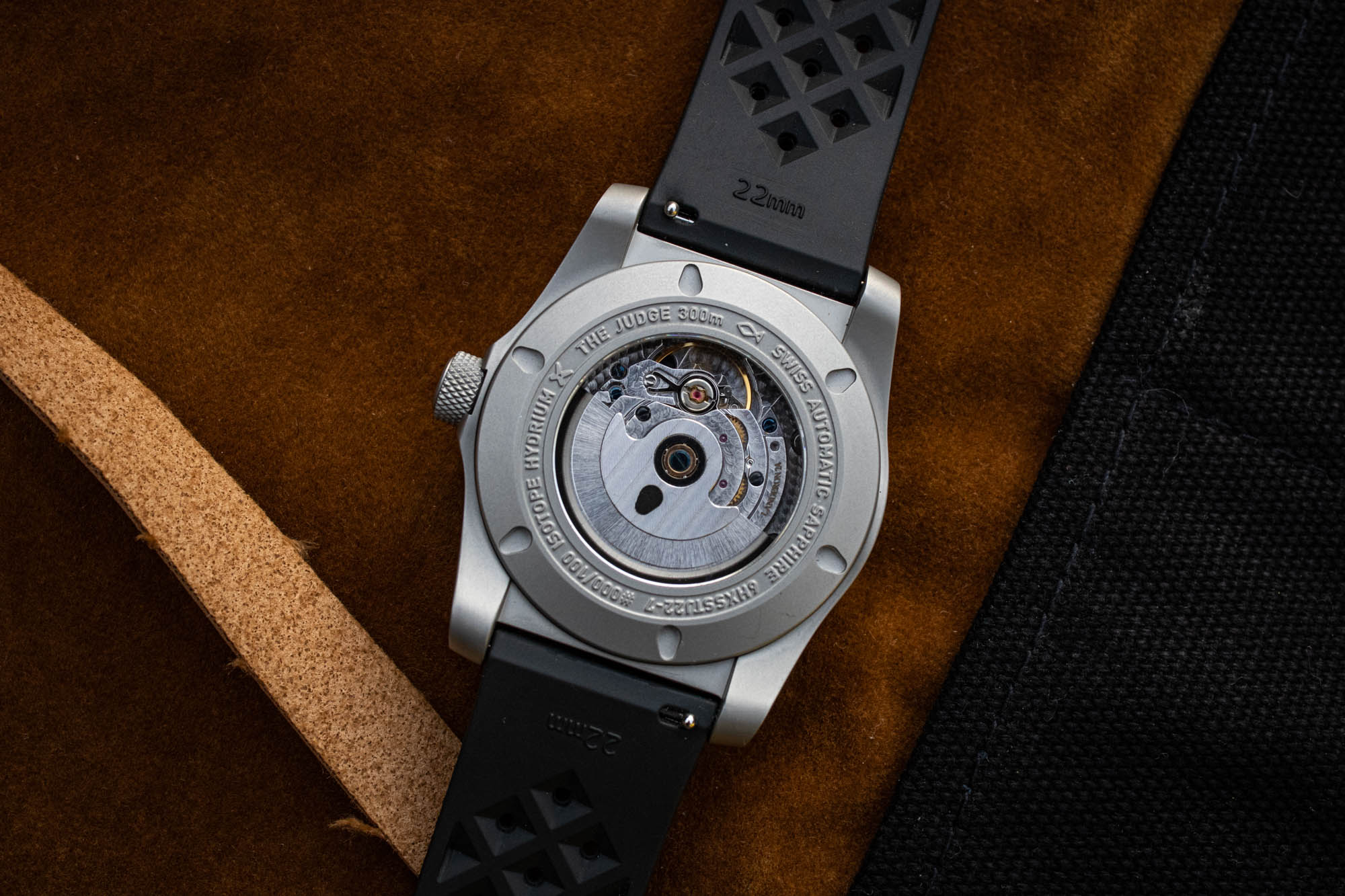 At first glance, the Isotope HydriumX “The Judge” is undeniably an interesting and cool-looking watch, but I initially wasn’t sure if I was ultimately going to click with it long-term — especially given that I don’t have any type of personal connection to UK judges or the European judicial system. That being said, after having the watch in my possession for several weeks now, none of the initial fun and intrigue has worn off in the slightest. If anything, my fondness for “The Judge” has only increased during my time with it, and I find myself wearing it far more often than I ever initially expected. While “The Judge” is larger than most watches that I tend to wear on a regular basis, its bold, chunky design and bright red bezel make it feel as though a cartoon watch has come to life and is strapped on my wrist, and this ultimately makes it incredibly fun and enjoyable to wear. Additionally, with an official retail price of approximately $800 USD (the actual retail price is £700 GBP, and this will automatically get converted to your specific currency at the current exchange rate), the Isotope HydriumX “The Judge” is still relatively affordable, especially considering that it is powered by a Swiss mechanical movement and produced by a small independent brand as a limited series of just 100 examples. “The Judge” is available for pre-order now from Isotope’s website, with delivery set for January/February 2023, and considering the popularity of previous editions, this version of the HydriumX diver is also likely to sell out quite soon. For more information, please visit the brand’s website.