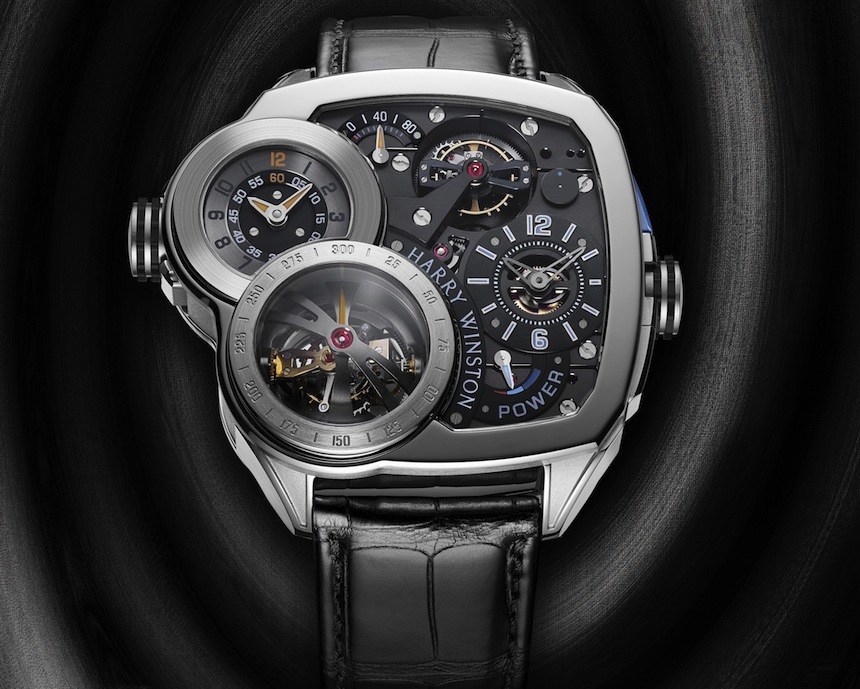 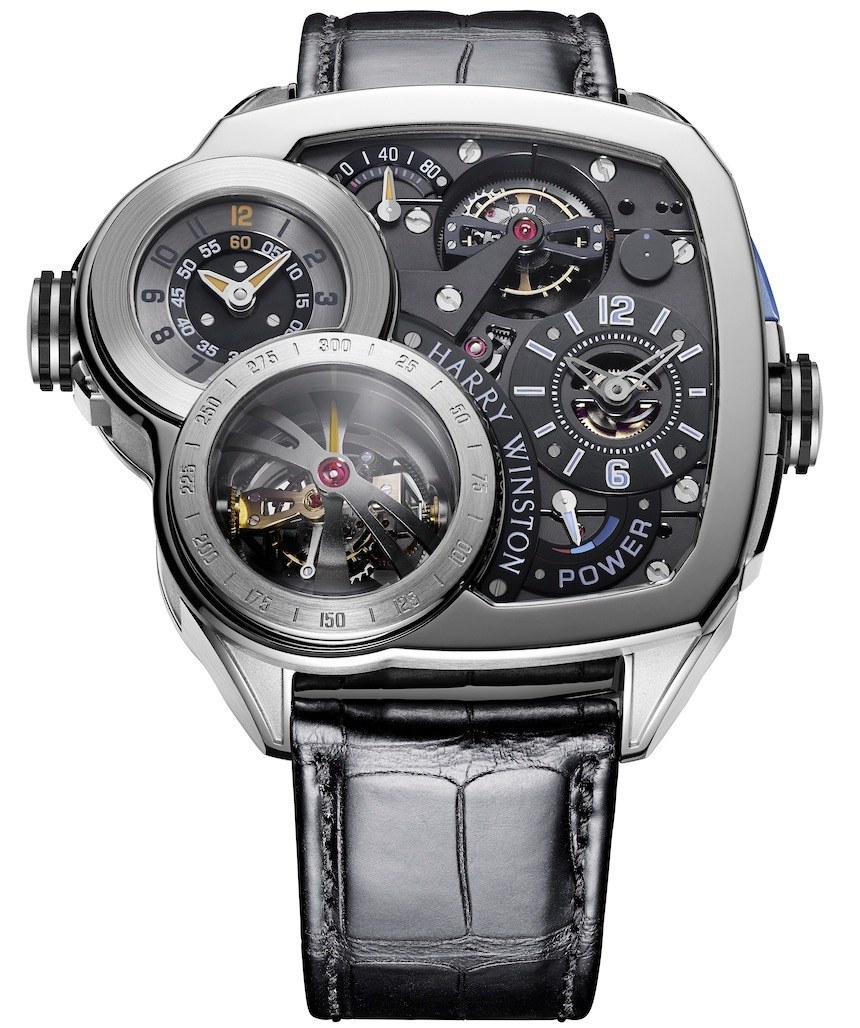 Harry Winston has recently announced another chapter in their Histoire de Tourbillon line, the Harry Winston Histoire De Tourbillon 6. It is traditionally one of the most complicated watches, but released with the least amount of usable illustrations – you guessed it: one front view. To sum it all up real quick: a triple-axis tourbillon, a separate karussel, 683 parts, two time indications, resetting hands on the second indication, carriage stop on the karussel, over 80 hours of power reserve, and a monstrous 55-millimeter case. Take all that into account, and you will see why it baffles me why such halo pieces – because, after all, such releases are the epitome of halo releases – are debuted with just a single front view of the watch. Illustration-rant over, we can move on to similarly mind-boggling, albeit much more interesting issues now – of the mechanical kind! 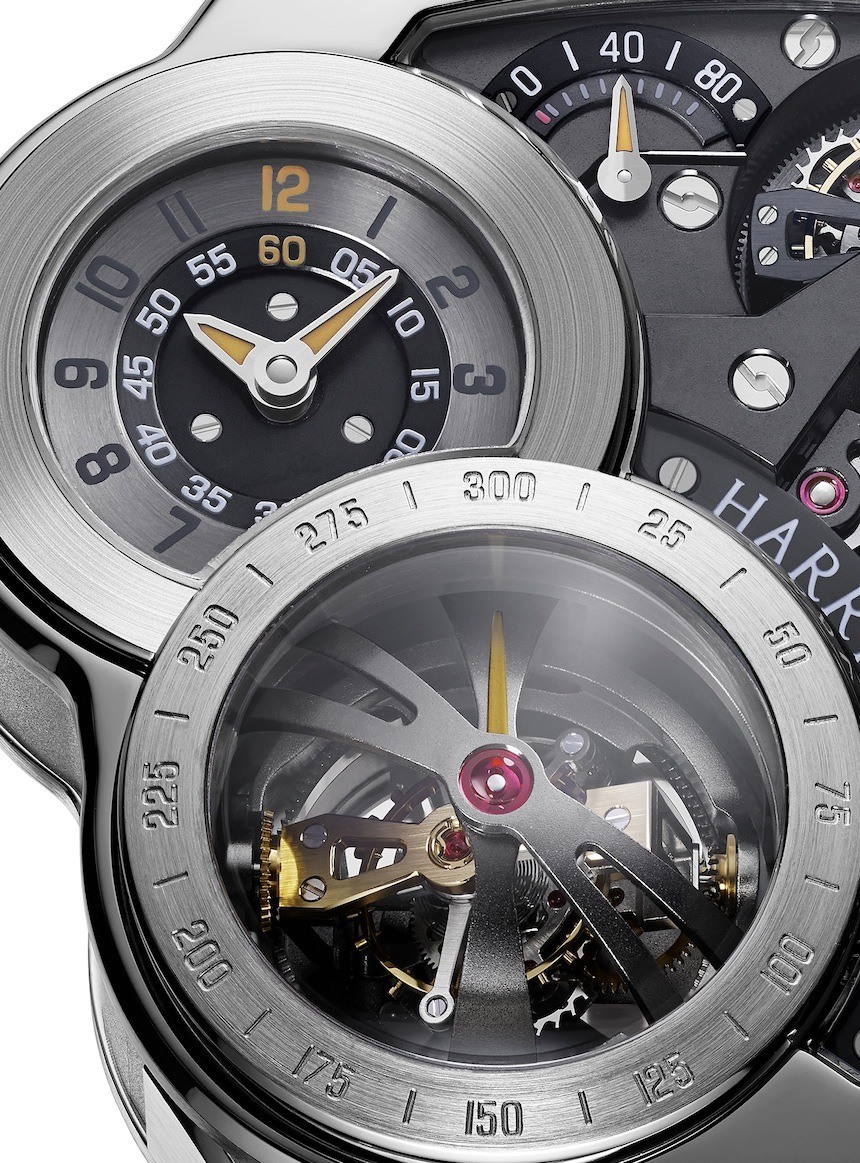 The left hand side of the highly asymmetrical Harry Winston Histoire de Tourbillon 6 dial is, of course, dominated by the triple-axis tourbillon, hidden under what appears to be a bulbous sapphire crystal and an arched bridge securing the entire mechanism. It’s a speedy beast too: the innermost carriage that contains the balance wheel and escapement pinion has a 45-second rotation cycle, the intermediate carriage has a 75-second rotation cycle, while the outer carriage takes 300 seconds to make a full rotation. The least common multiple of those figures is 900, which means that it takes as much as 15 minutes for the balance wheel to return to its original position. In other words, the balance wheel takes up the same position only four times every hour. 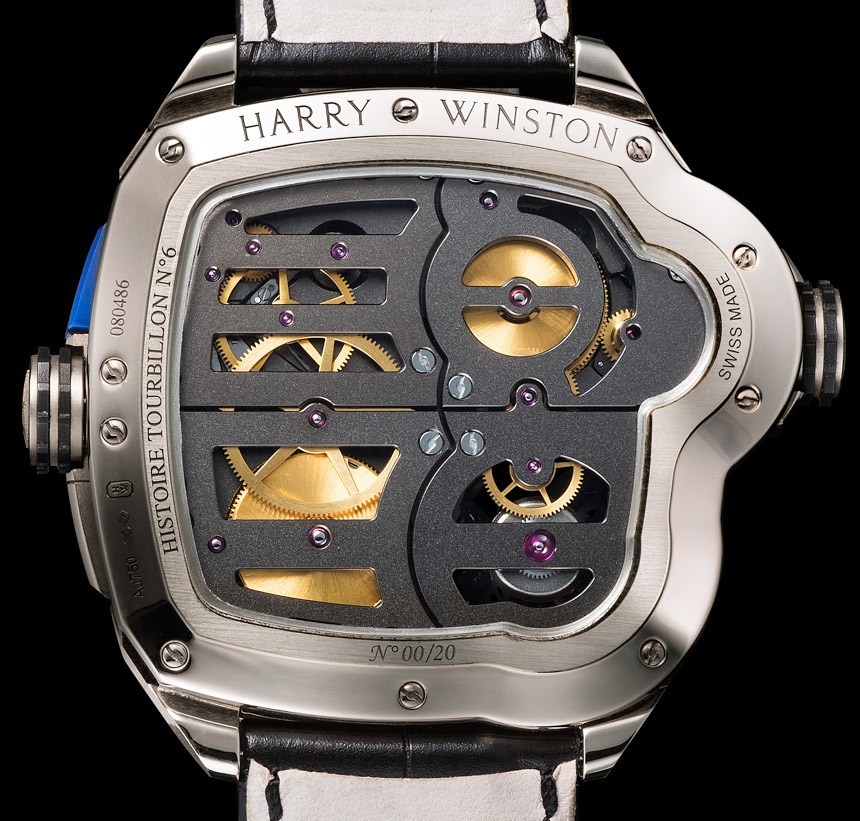 There is impressive news for those obsessed with the idea behind the actual functionality of the tourbillon – which is to average out positional errors by constantly rotating (re-positioning) the balance wheel. And that is knowing that the balance wheel and spring of the Harry Winston Histoire de Tourbillon 6 are spinning as freely in space as Sandra Bullock was in the movie Gravity. The tourbillon assembly in itself is composed of 141 parts and weighs a mere 1.85 grams – and while that seems remarkably light, it is in fact a very heavy structure when you consider that it has to be stopped and set into motion six times every second, as the frequency of the balance wheels is 3 Hertz (21,600 vibrations per hour). 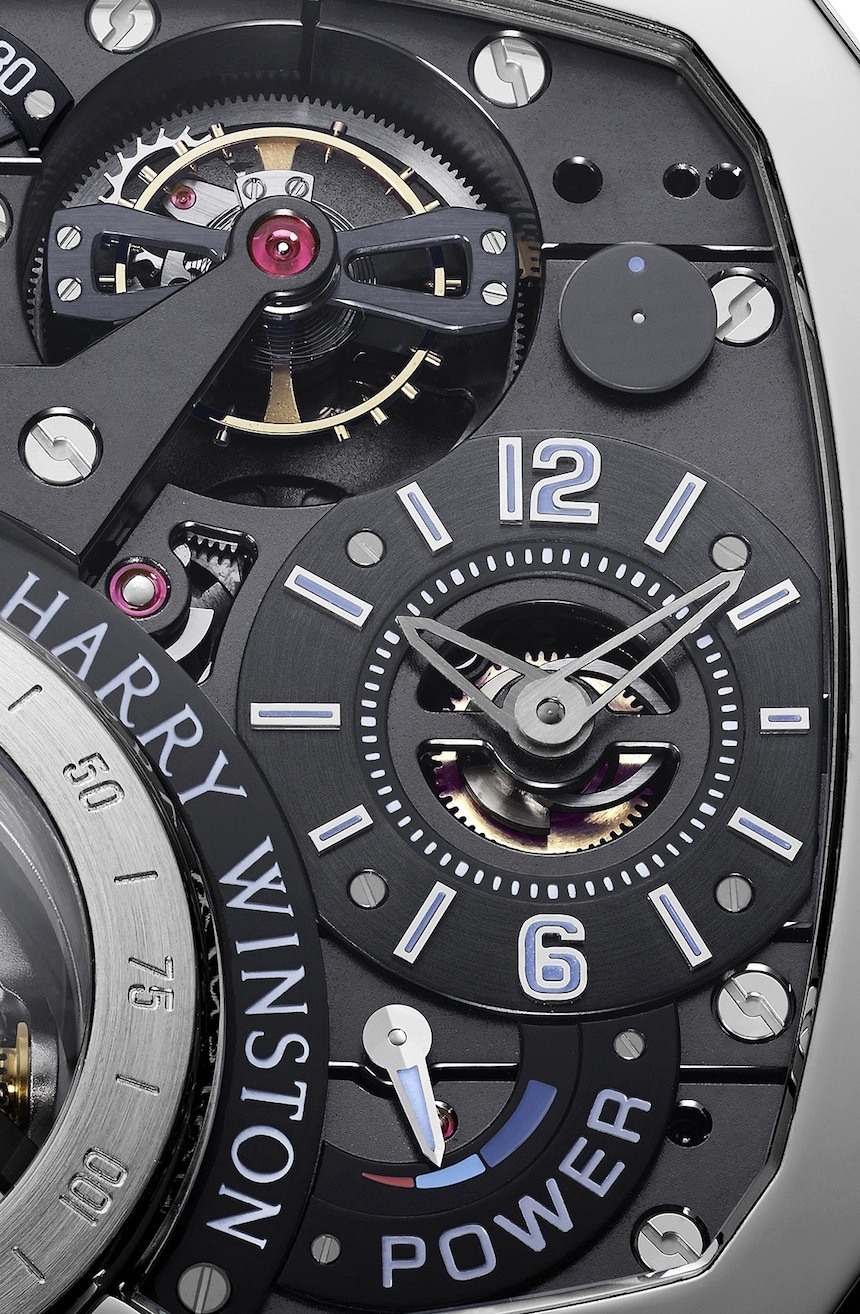 On the right hand side of the Harry Winston Histoire de Tourbillon 6 dial, a karussel is exposed at the 1 o’clock position: this, quite obviously, is a device that rotates on a single-axis, making a full rotation in 30-seconds – visibly faster than your average one-minute tourbillon. The really interesting part is that the second time display – with the blue indices and skeletonized hands, situated under the karussel – is at first what it seems: a second time display that is linked to the karussel, and hence, through the crown in the right hand side of the case, can be set separately from the other indication. 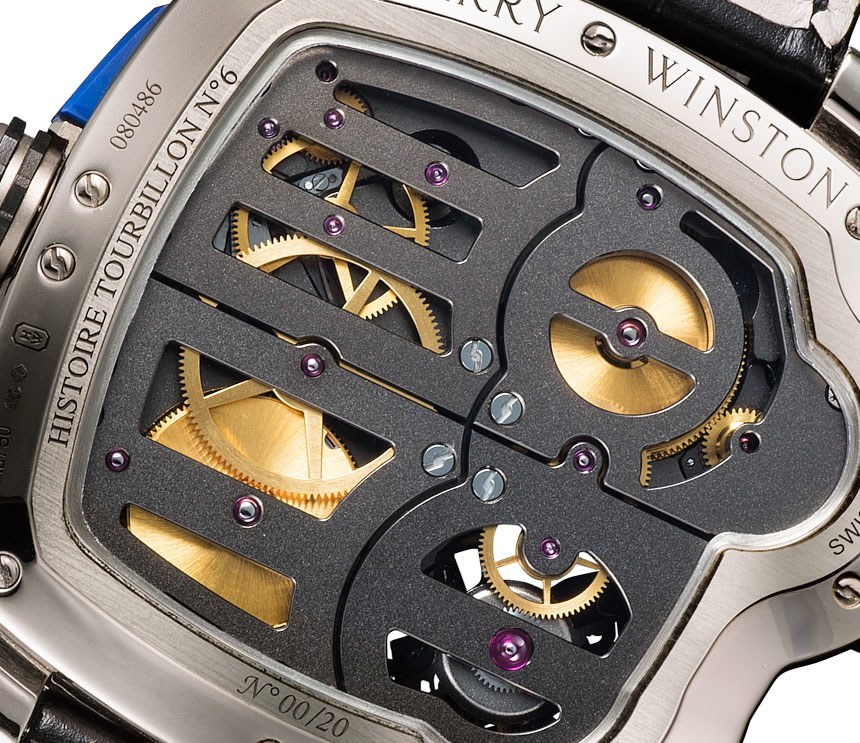 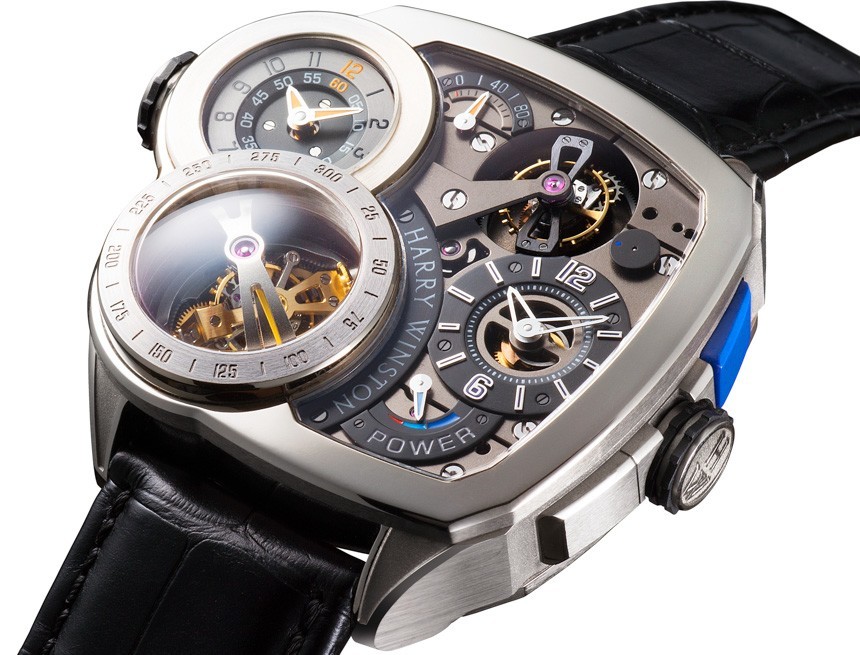 However, by using the a pusher at the 2 o’clock position of the case, both the hour and minute hands can be reset to zero, allowing this second display to be used as a chronograph. And while there are no running seconds – other than the karussel itself which, again, makes a full rotation in half a minute – I think this is a great idea and something that would be fascinating to see on other, perhaps more widely available watches. The thing is that, sometimes, timing events with to-the-second accuracy is not really necessary, however, being able to use this display either as a second time zone or a 12-hour chronograph easily compensates for the lack of chronograph seconds. I, personally, like to time journeys – something you can scarcely do with a 30-minute chronograph and even more rarely must do with accuracy to the second.

As for the size: it is 40.90mm by 45.08mm and 17.30mm thick. “On the larger side,” you would say? Well, those are the dimensions of just the movement itself, uncased. Not that there is anything wrong with that, as such remarkably complicated pieces do tend to get this large – and again, if you put that into perspective, we are looking at an incredible little machine that measures less than 2 inches in any direction. 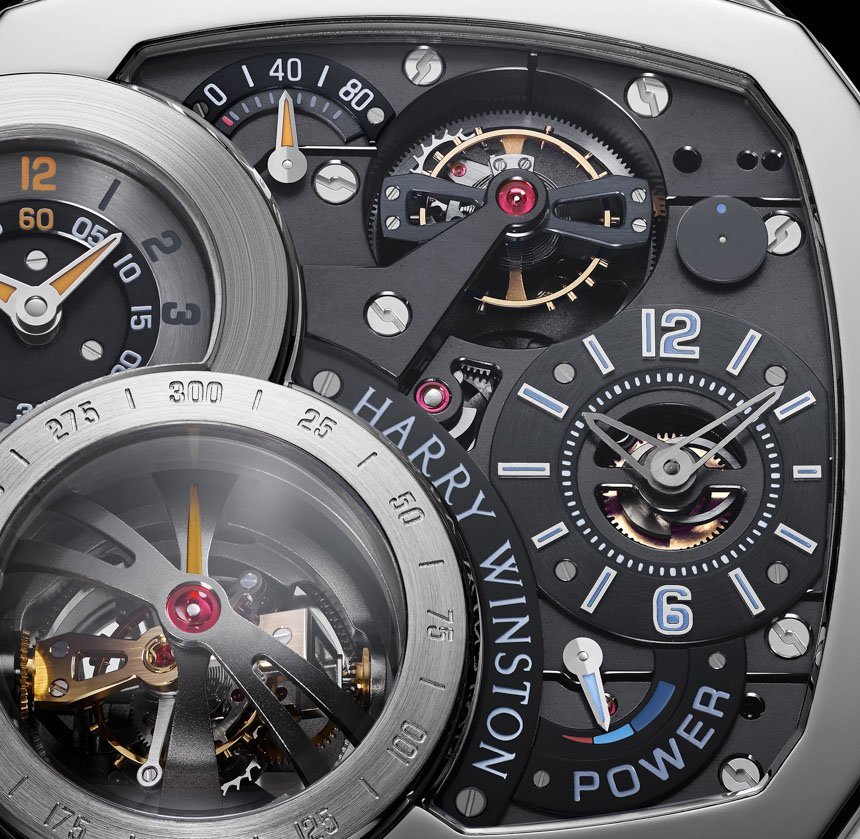 The asymmetrical case of the Harry Winston Histoire de Tourbillon 6 is, of course, consequently massive: 55mm by 49mm (that is for the edges of the bezel) with a thickness of 21.80 millimeters. The case is in 18k white gold – with a spot of blue from the ceramic pusher above the crown on the right. Interestingly, the case has a rather gracefully curved, cushion-shaped basic shape to it that is then greatly altered by the two circular additions on the right hand side – as though some mind-boggling horological complications grew out of a more modestly sized watch, making space for themselves in the case.

The price for the most complicated Harry Winston watch, the Harry Winston Histoire de Tourbillon 6 is $722,900 – that is for one of the 20 pieces of this limited edition. harrywinston.com