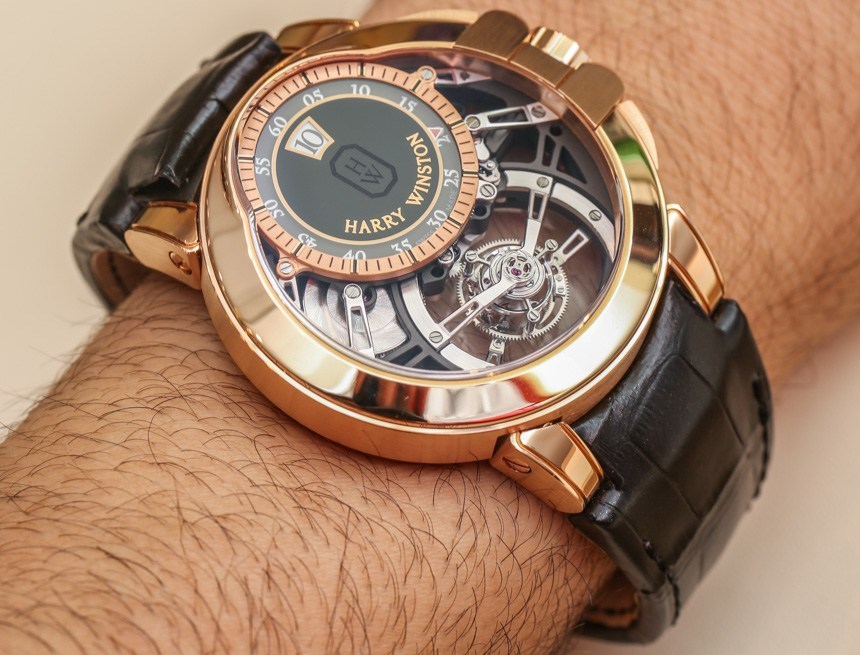 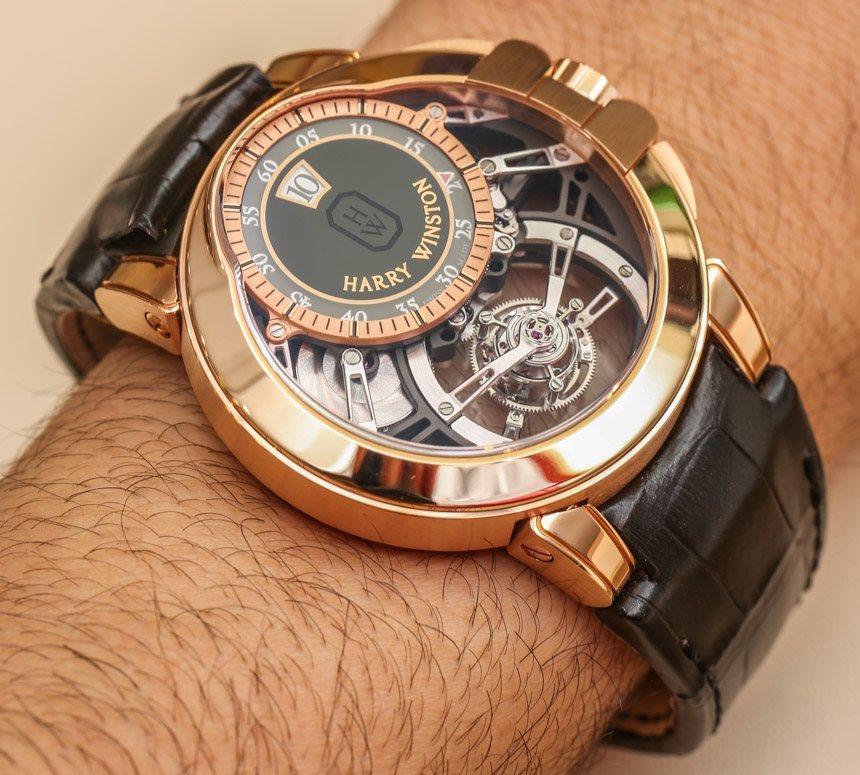 Harry Winston is one of the most dynamic watch makers today not only because of the sheer diversity of their aesthetic styles and movements, but also because of the vast divide between their most conservative and most wild watches. Today, I am going to look at something which is, remarkably, sort of in the middle, melding classic elegance with a unique-looking haute horology high-end movement. This is the Harry Winston Ocean Tourbillon Jumping Hour, and if the recently covered Harry Winston Opus 14 isn’t for you, then perhaps something like this out of the Ocean collection is more to your liking. 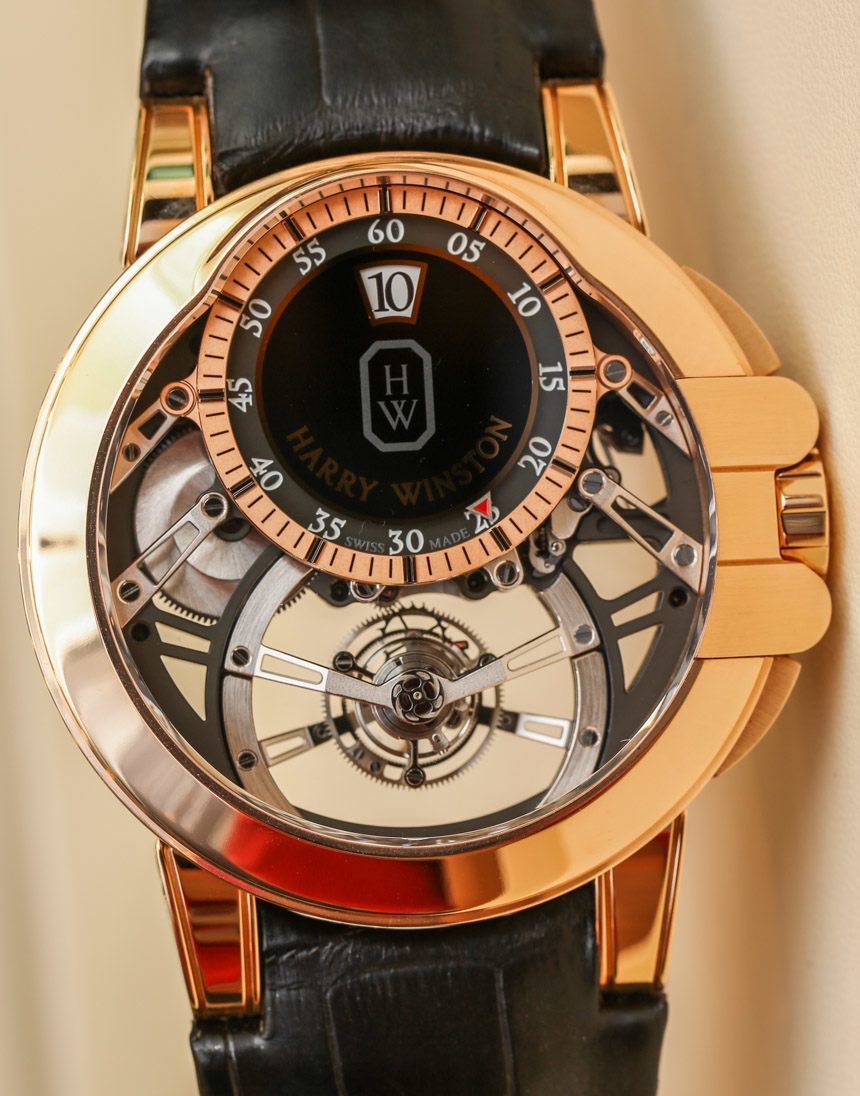 When the Swatch Group purchased Harry Winston, a lot of people speculated that wild high-end watches like this would start to be phased out in favor of more classic and straight-forward luxury watches focusing on diamonds and also women. Yes, diamonds continue to be a cornerstone of the Harry Winston brand, but under leadership from Nayla Hayek, Harry Winston does not seem to be abandoning its more exotic high-complication watches which continue to fit the brand nicely. With that said, if you want the Harry Winston Ocean Tourbillon Jumping Hour watch with diamonds – it is available (at least in the 18k white gold version). Yes, 58 baguette-cut diamonds (over 6 carats) line the bezel and lugs of the ref. OCEMTJ45WW002 version of this timepiece. The 18k white gold model without diamonds is ref. OCEMTJ45WW001, but right now, I am talking about the 18k rose gold version which is the reference OCEMTJ45RR001 that you see before you. 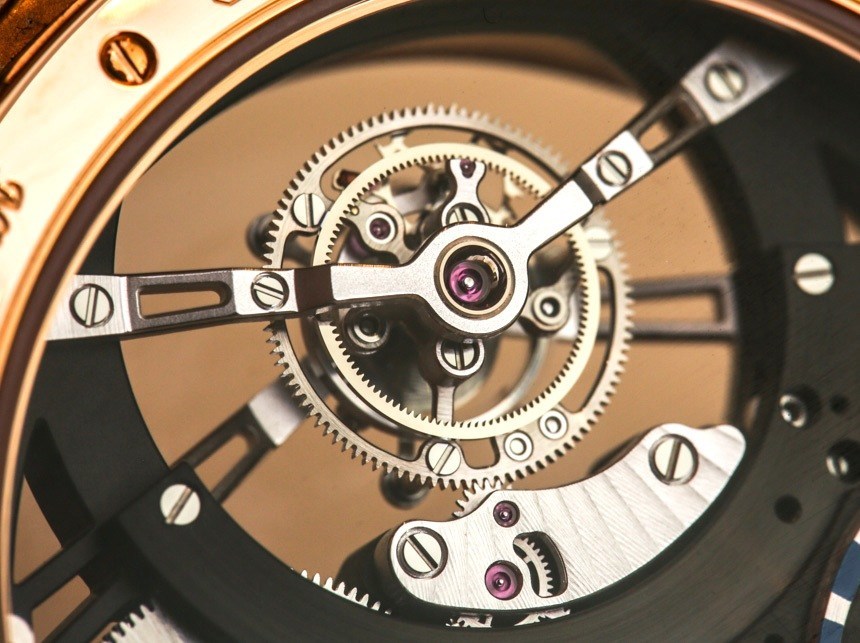 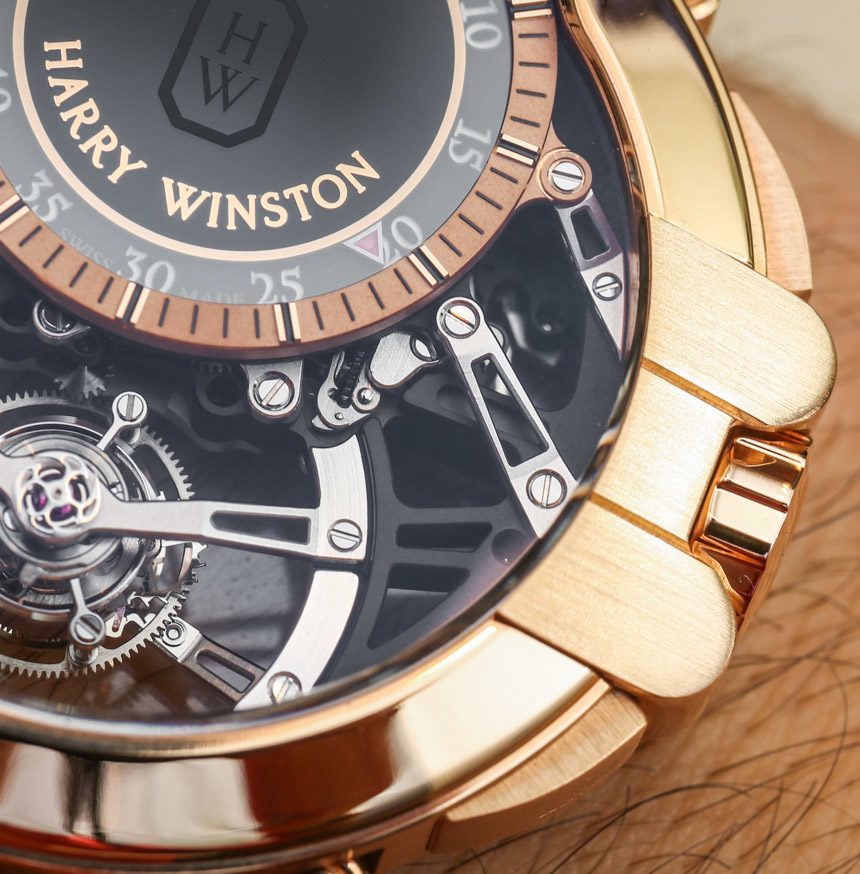 The watch begins with the Ocean-style case which has the brand’s distinctive “crown claw” and other case design elements. For this Ocean model, Harry Winston set the case at 45mm wide with a nice combination of polished and brushed surfaces. Yes, it wears large, but that is sort of the point. I think the mixture of elegant and sporty lines is something that should appeal to a very broad spectrum of watch lovers seeing something distinct but also versatile. Perhaps, the Harry Winston Ocean collection is worth a closer look for many people? 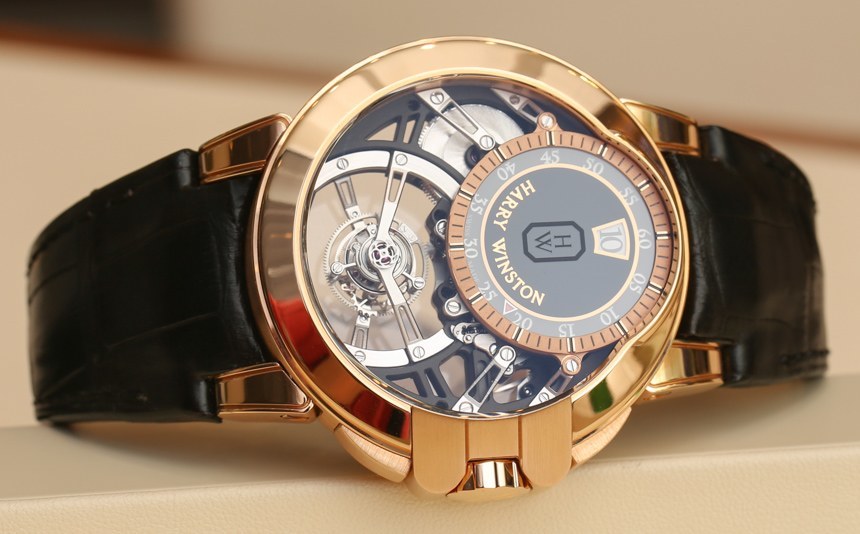 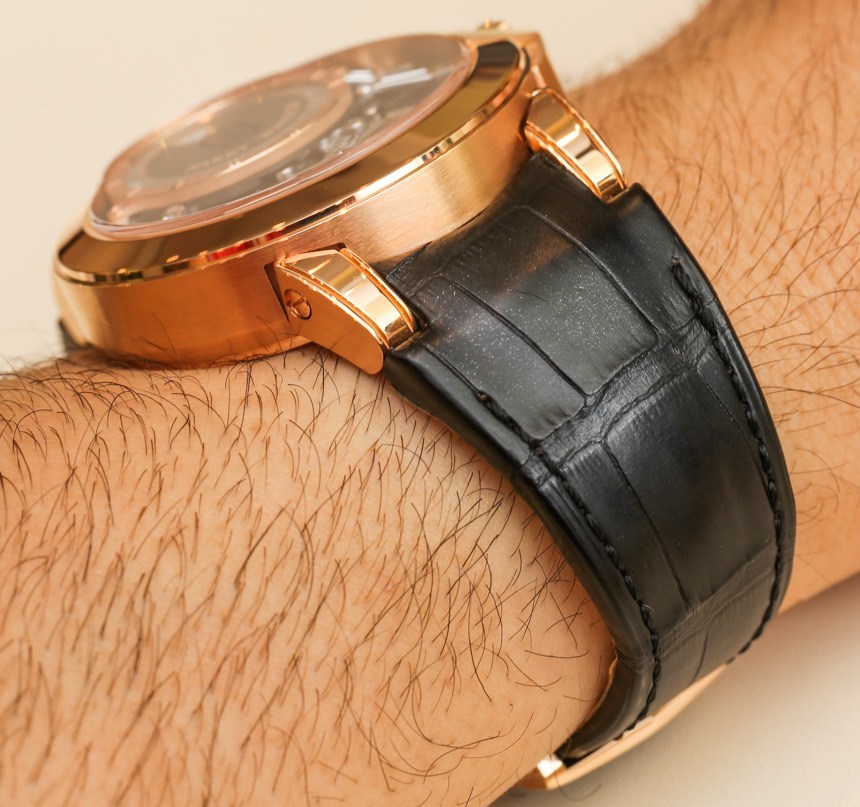 Harry Winston included such an interesting dial and movement that I hope people take the time to appreciate the case. Mostly skeletonized and very exposed, the manually wound mechanical movement inside of the Harry Winston Ocean Tourbillon Jump Hour is the star of the show. Operating at 4Hz (28,800 bph), this modern movement has a long power reserve of 110 hours – which is really great. You can see the mainspring barrel on the left-side of the dial. Stuff like this makes it hard for me to accept lower frequency regulation systems in other tourbillon watches when offering a 4Hz (versus say 3Hz) tourbillon is really not that big of a deal. 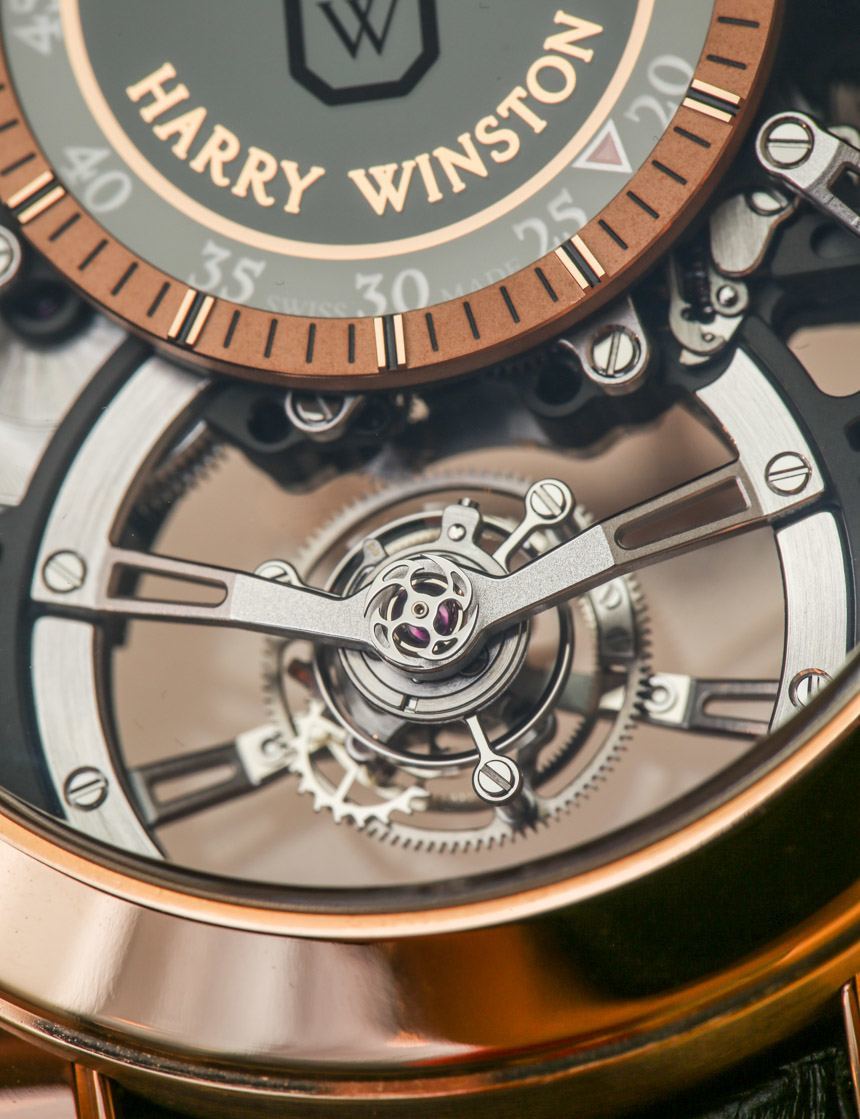 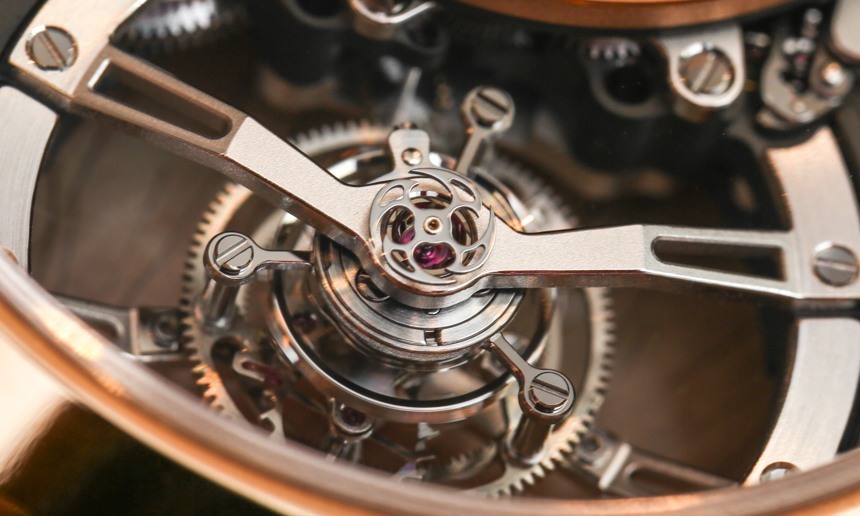 One of the coolest parts of the tourbillon is the Harry Winston Shuriken logo (found on many of their watches) which doubles as a running second indicator being connected to the tourbillon. On the rear of the movement – which is nicely done, with a mixture of silver and black-colored elements – is a handy power reserve indicator (that I feel is a “must have” on high-end manually wound movements). 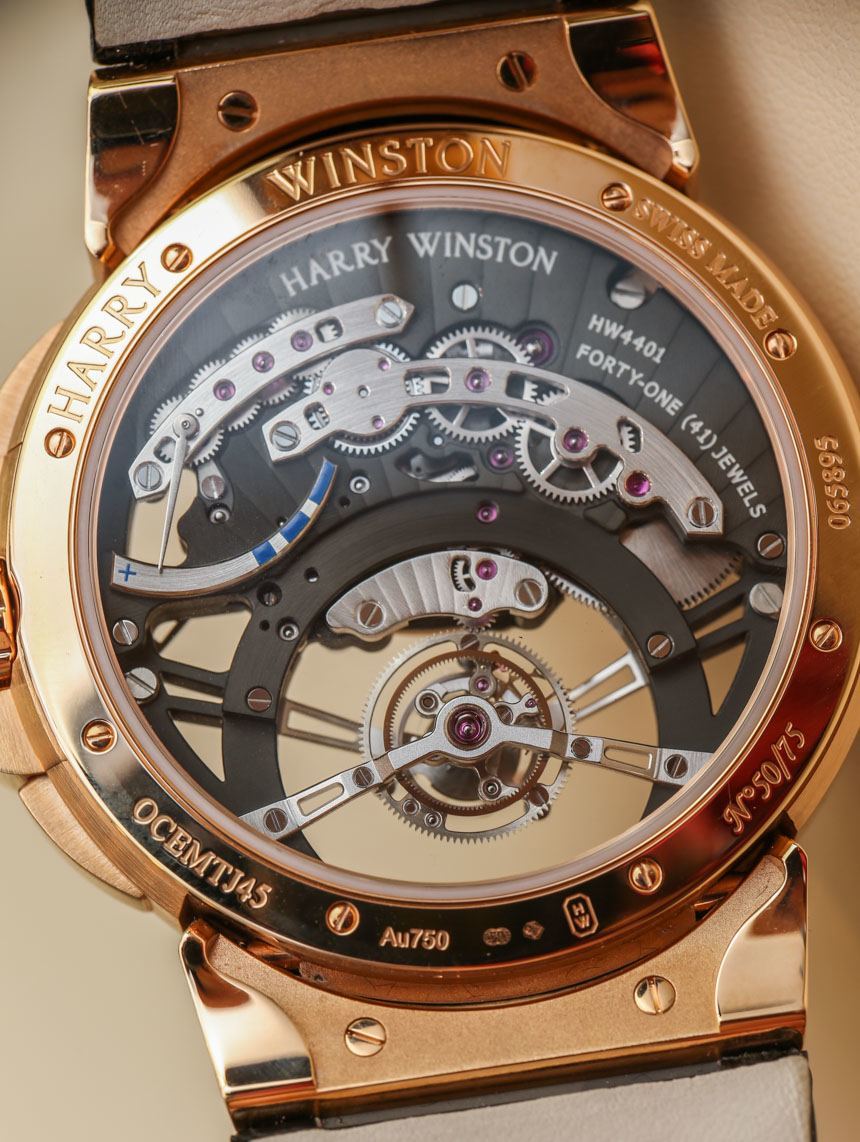 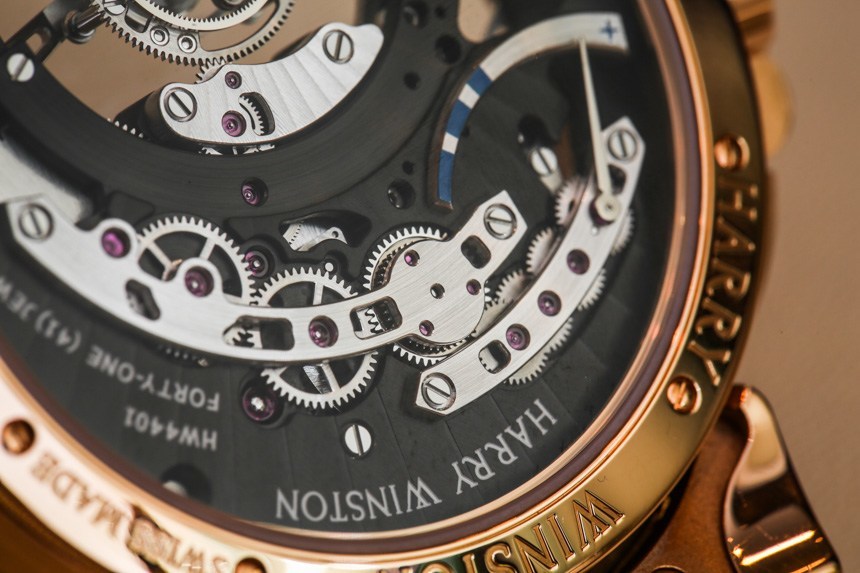 Moreover, I like the modern look of the movement that, in my opinion, offers a fresh look on a high-end mechanical movement that is contemporary as well as approachable. Reading the time is interesting, as well, because Harry Winston marries a traditional minute hand with a jumping hour indicator on a dedicated subdial at 12o’clock. A disc indicates the hours and “jumps” to the next full numeral position each time the hour changes. The one legibility issue with the watch is the rather small red arrow which acts as the minute hand. The full scale of minute markers as well as the five minute indicators is helpful, but reading the minutes takes a second to find the red arrow, meaning it requires more than a mere glance. Perhaps a small price to pay for something this interesting on the wrist? 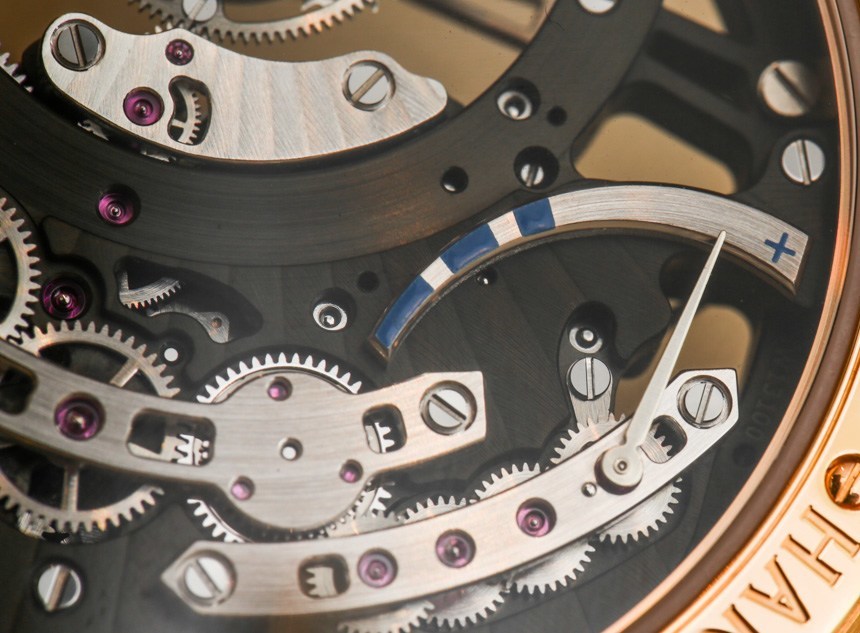 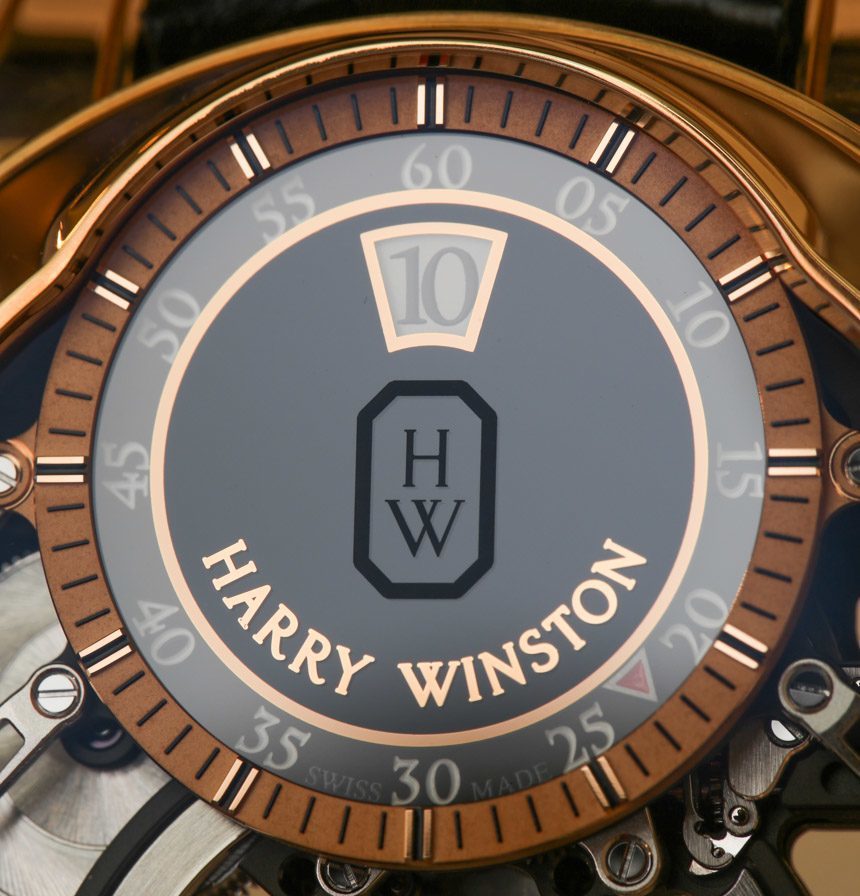 An interesting part of the dial which indicates the time is the more traditional Harry Winston “HW” logo over the piece of black-colored sapphire crystal. It is designed to be invisible in some light, and visible in others. I think this move was intentional in order to make the dial a bit more visually interesting, forcing the wearer to move the dial around in the light in order to appreciate it – actually in a similar manner that people do when looking at diamonds as they sparkle and glisten in the light. 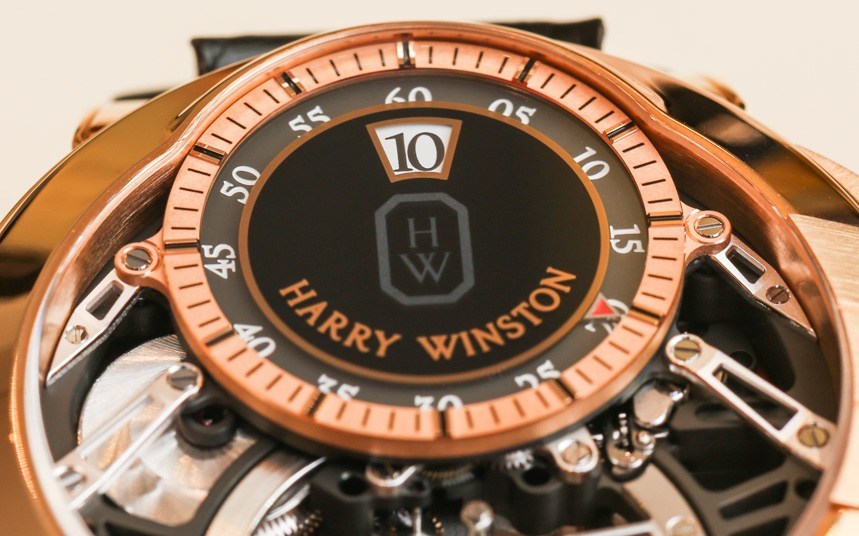 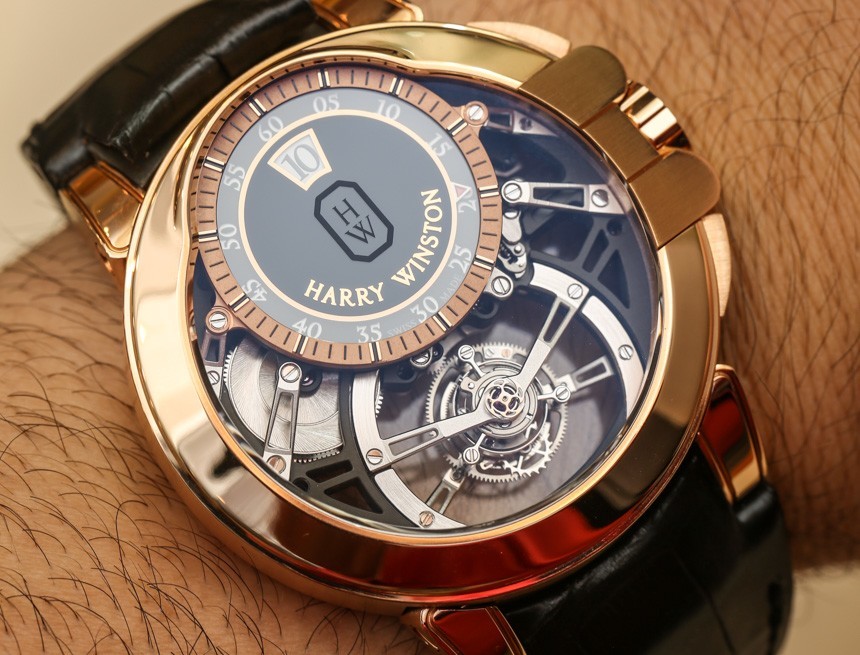 With a complicated design, the Harry Winston Ocean Tourbillon Jumping Hour is actually a very simple watch to live with given the relatively straight forward complications and its simplicity of use. Exotic high-end watches like this might have unique designs but are actually pretty decent when it comes to daily wear – and for that I am thankful each time I find watches of this type. Attached to the case is a fitted, tapering black alligator strap that completes the look. The three currently available versions of the Harry Winston Ocean Tourbillon Jumping Hour are part of a limited edition of 75 pieces each. Price in 18k white or rose gold is $217,300 and with diamonds in 18k white gold the price is $378,400. harrywinston.com