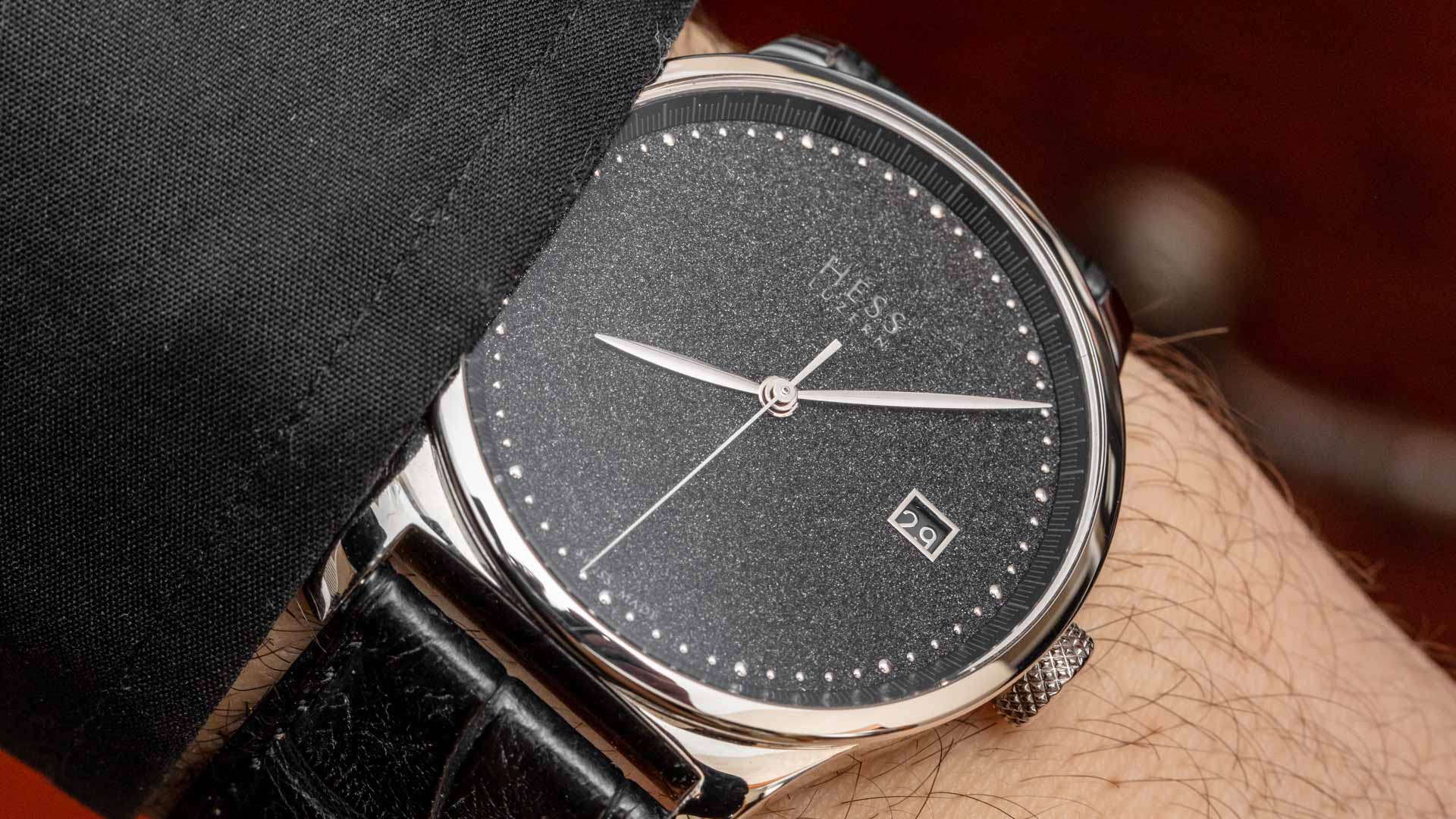 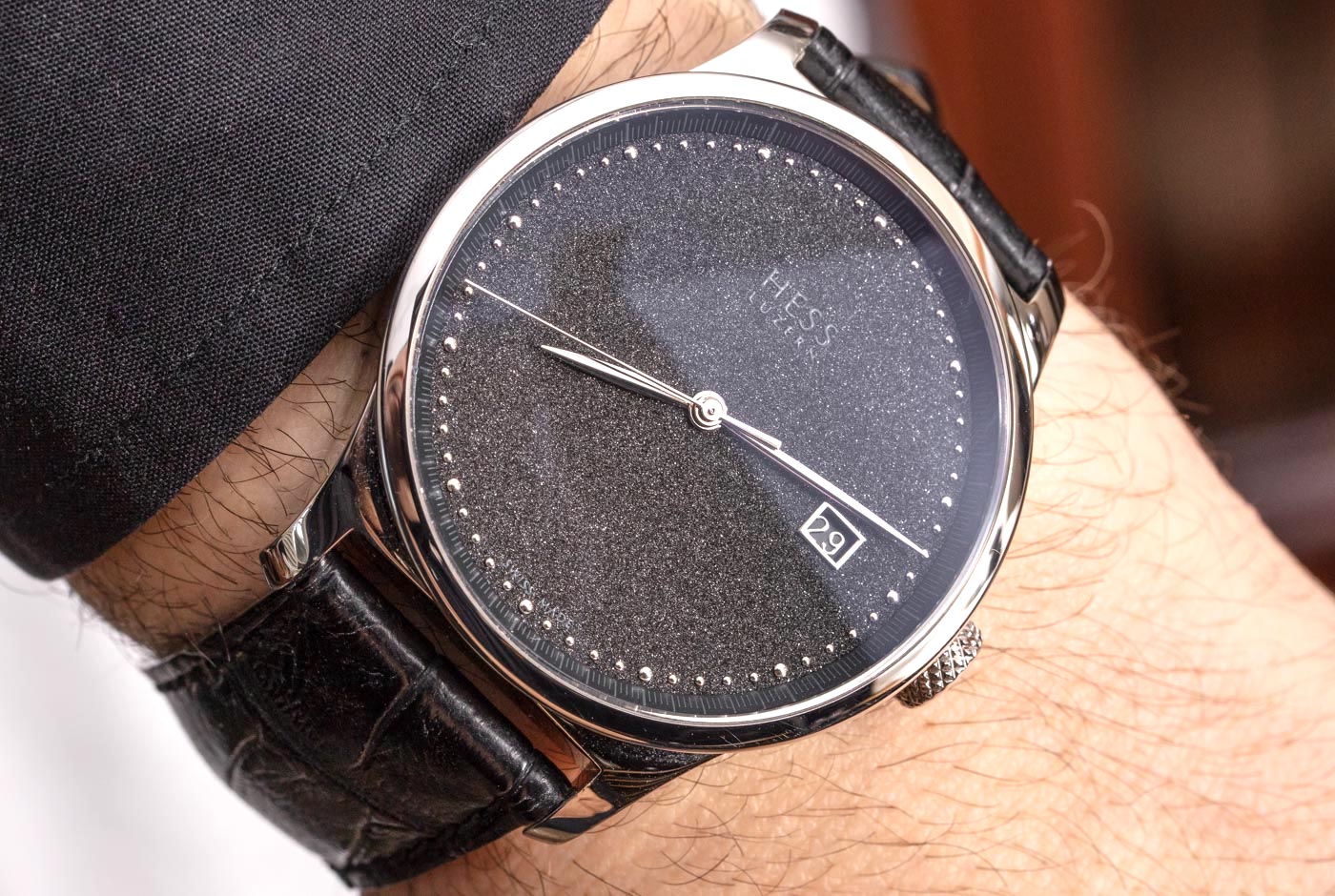 Hess Uhren Luzern is a newer Swiss watch brand hailing out of the historic city of Lucerne, having been founded by a husband and wife team. Judith and watchmaker husband Walter Hess are aiming for a timeless, conservative watch style that has a little bit of pizazz for the wearer. In the case of this Hess TWO.2 Diamond Dust watch, we see a dress-style mechanical watch with a black dial produced using diamond dust. As a long-time fan of diamond dust-dialed watches (they are quite rare, especially for men), I was curious to see what Hess Luzern was offering as part of the brand’s debut timepiece collection.

A slightly more high-end version of the Hess TWO.2 Diamond Dust watch exists with small diamonds on the dial used as the hour markers. This “TWO.2 Diamond Dust Black Rhodium” model has a more simple set of small applied metal hour and minute markers done in a classic style with polished leaf-style hands. An attractive and welcome detail on the TWO.2 is the date disc, which uses raised, silvered numerals against a black disc. The allows for the watch to have a date complication, but one that nevertheless matches the design of the dial and does not inelegantly pull attention away from an otherwise cohesive black and silver look of the dial. 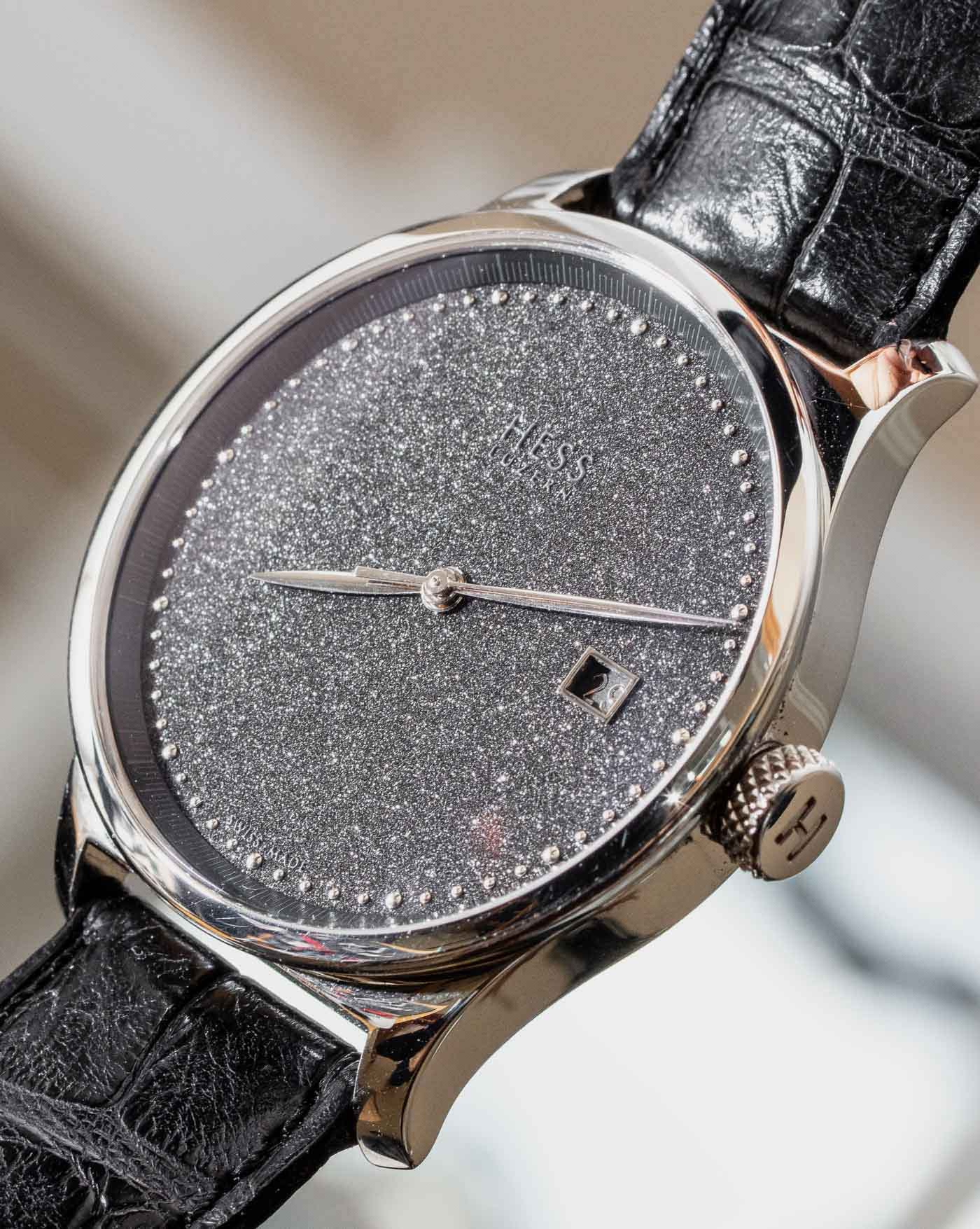 At 39.4mm-wide, Hess makes it clear they want the TWO.2 Diamond Dust collection to be considered “unisex” with applicability to male or female wearers. Men typically don’t like the idea of purchasing (or wearing, for that matter) women’s watches but women tend to not have any issue donning “men’s watches.” I would recommend that Hess not explicitly state on its website that the watch is the “ideal size for ladies and men.” That might be true, but from a marketing perspective it can be offputting to us sensitive men. Water resistant to 50 meters, the TWO.2 case is 11.4mm-thick, which, in my opinion, is about 1-2mm thicker than the watch really needs to be. Over the dial is a slightly domed and AR-coated sapphire crystal. Despite claiming to have AR coating on both sides of the crystal, the TWO.2 has a bit more glare than I’d prefer. 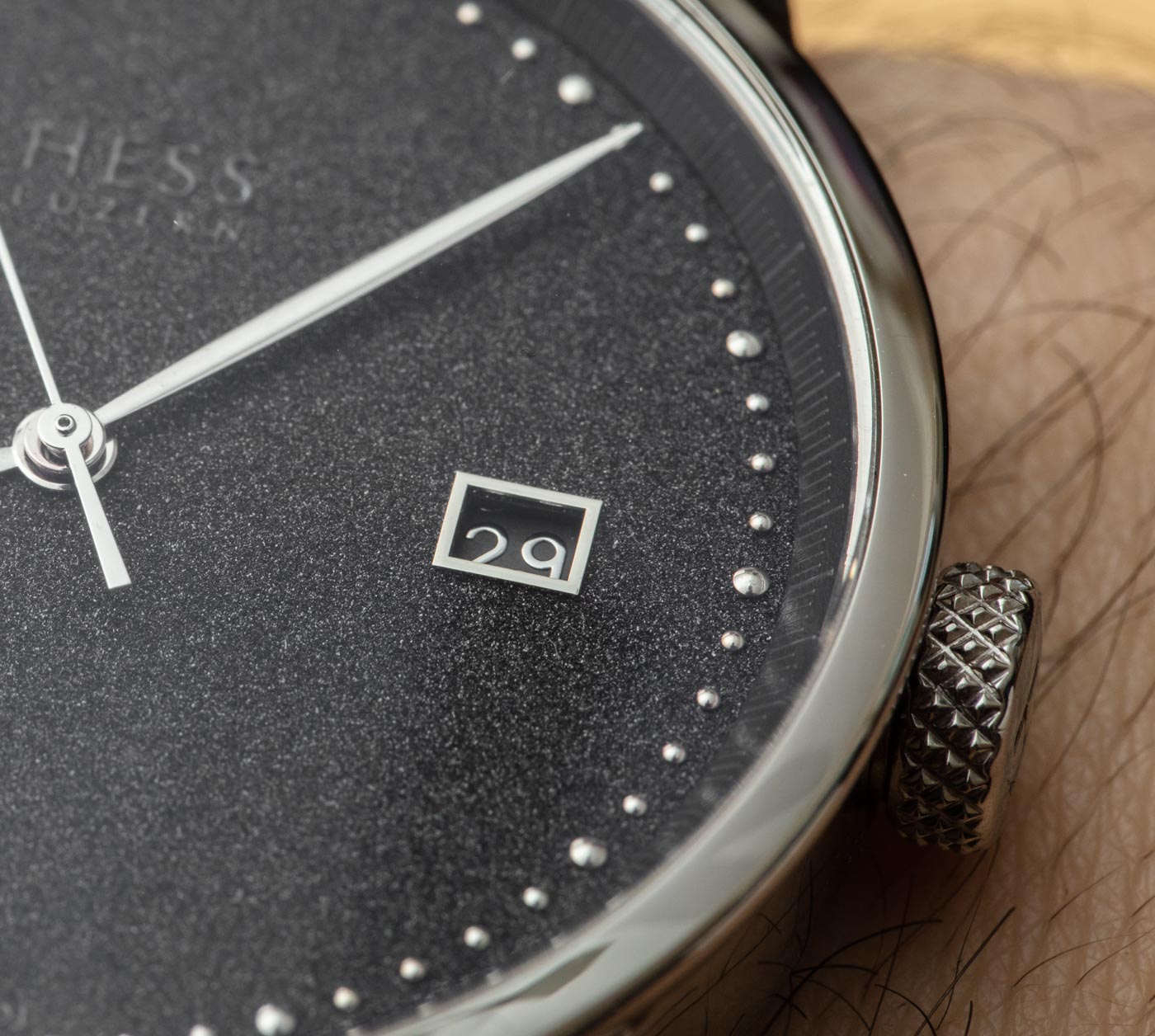 When reviewing high-end dress watches (which the Hess Luzern TWO.2 Diamond Dust is, when price is considered), I like to be particularly focused on the wrist presence and case finishing. Good dress watches are supposed to evoke elegance and sometimes slim proportions are part of that. The TWO.2 watch comes with a polished steel case by default, but the brand indicates that, upon special order, it can offer precious metal case options as well. The case design overall (aside from being a bit too thick) is nice, but I question the choice of polishing. The entire case is polished, which actually increases its visual mass. By having a brushed strap or some change in the finishing, designers can help visually reduce the size of a case or enclosure. The relatively simple construction of the TWO.2 case, along with its mostly uniform finishing, doesn’t lend itself as well as it could to the high-end feeling Hess is aiming for. A different type of case finishing could really change that. 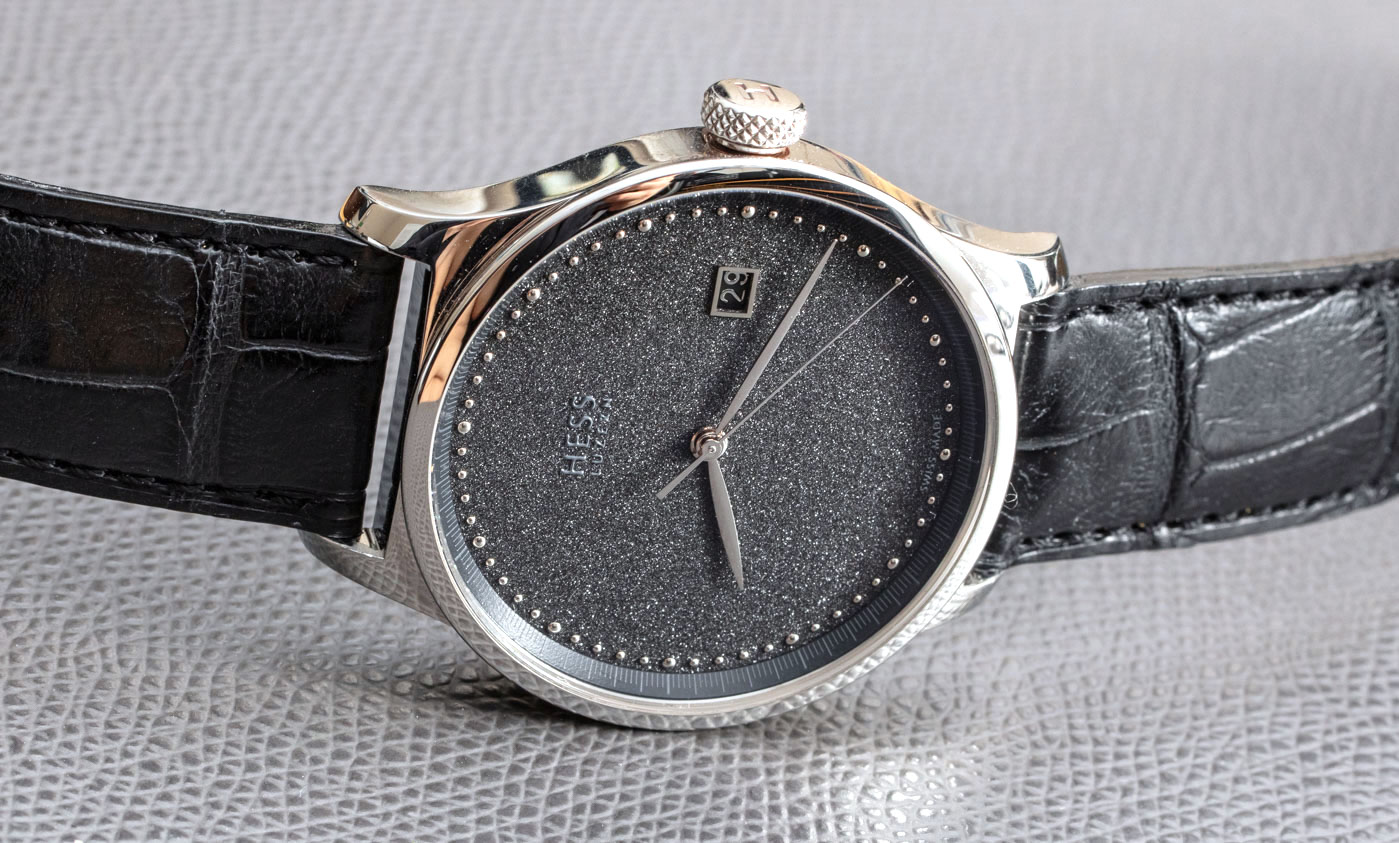 Forms of finishing make a huge difference, and not all polishes are created equal. One of the things that the TWO.2 case appears to use is hand-polishing for the case. I’m not entirely sure if this is the case, but the “milky polishing” (as I call it) on the case is what you tend to see from hand- versus machine-polishing. Hand-polishing sounds fancier (and it certainly can be), but in practice it can result in a chromed look, versus a mirror-polish look. Chroming is not a polishing process but rather a coating process designed to eliminate the cost and complexity of actual polishing. Chroming is less uniform and more generalized, with micro-bumps and other surface deviations, visually creating a less high-end look. I could spend a lot more time discussing the pros and cons of various surface finishes in the world of timepieces, but suffice it to say that Hess has a good intention with the polish of the TWO.2 case, but I think that more refinement in this area can lead to a much more high-end look and feel that such a lovely overall design deserves.

Speaking of polishes and matters of how surfaces play with the light, let’s talk about my favorite part of the TWO.2 Diamond Dust watch, which is the dial itself. Diamond dust dials are produced using a special process in which actual small diamond particles are attached to the dial using some bonding process. The dial then has a sparkly texture to it, which is by no means overpowering but rather acts a subtle background sheen. Diamond-dust dials are a masculine way to have a playful, albeit formal, timepiece aesthetic on your wrist. There is a distinct celebratory element to diamond-dust dials that is less in-your-face than strictly having diamonds on a watch and vastly more friendly or interesting than just a standard black dial. Hess places its logo on the dial, which ironically is quite challenging to see against the diamond- dust face, but perhaps that is all part of the watch’s “Swiss discreet” personality. 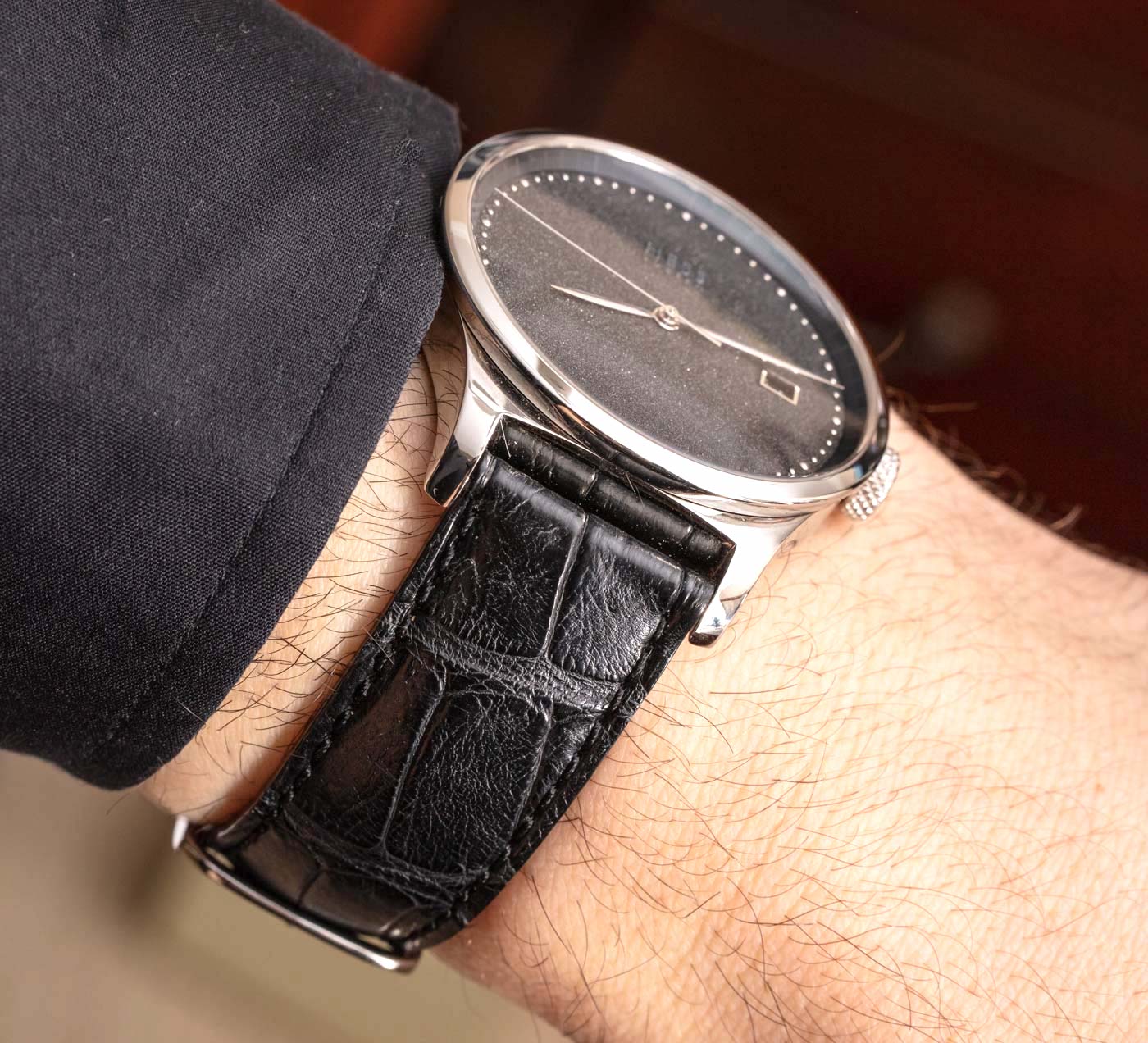 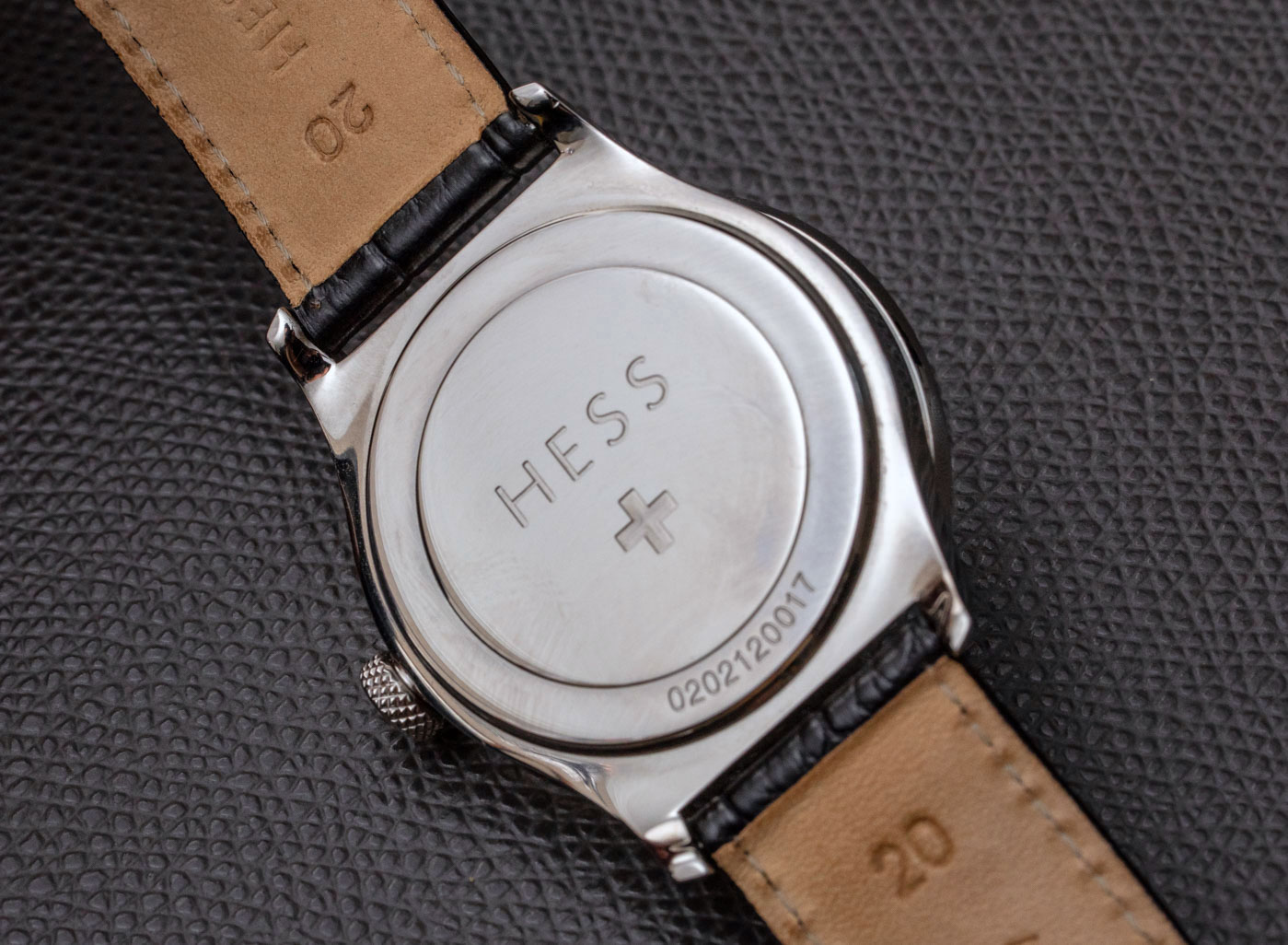 Inside the TWO.2 watch is a Swiss ETA 2824-2 automatic movement. Hess Luzern claims to use top-grade movements (as well as one that is rose-gold plated for color) which are nicely decorated but, unfortunately, the watches do not have a display caseback for the user to admire the movement. Hess states that they use a two-piece case that doesn’t have a removable caseback (just the bezel and the main case) in order to help promote water-resistance, etc. That’s great and all, but this is a 50-meter water-resistant-rated product and not a dive watch, so I’m not sure if the emphasis on case durability makes as much sense for a product like this. I actually think that having an open caseback would have been a positive design feature — especially because the existing caseback design on the TWO.2 Diamond Dust watch is a bit boring. A really cool idea might be to have an automatic rotor with diamond dust on it, viewable as it spins around in the case. Here we see an interesting conflict between the needs of design and style, and the considerations of a watchmaker interested on having efficiency, longevity, and practicality in a timepiece product.

Another interesting feature in the watch that is invisible is the fact that Hess removes the oxygen in the case after the movement has been cased, and replaces it with argon gas. Some specialized Sinn watches do the same thing and there are various benefits to removing air from inside of a watch. In addition to helping to reduce wear over time (notable when it comes to movement lubricant lifespan), having the air removed from the case prevents the dial from ever fogging up during extreme changes in temperature. I suspect that this added step to ensuring long-term durability and environmental resistance in the TWO.2 watch is directly related to one of the founders being a watchmaker. 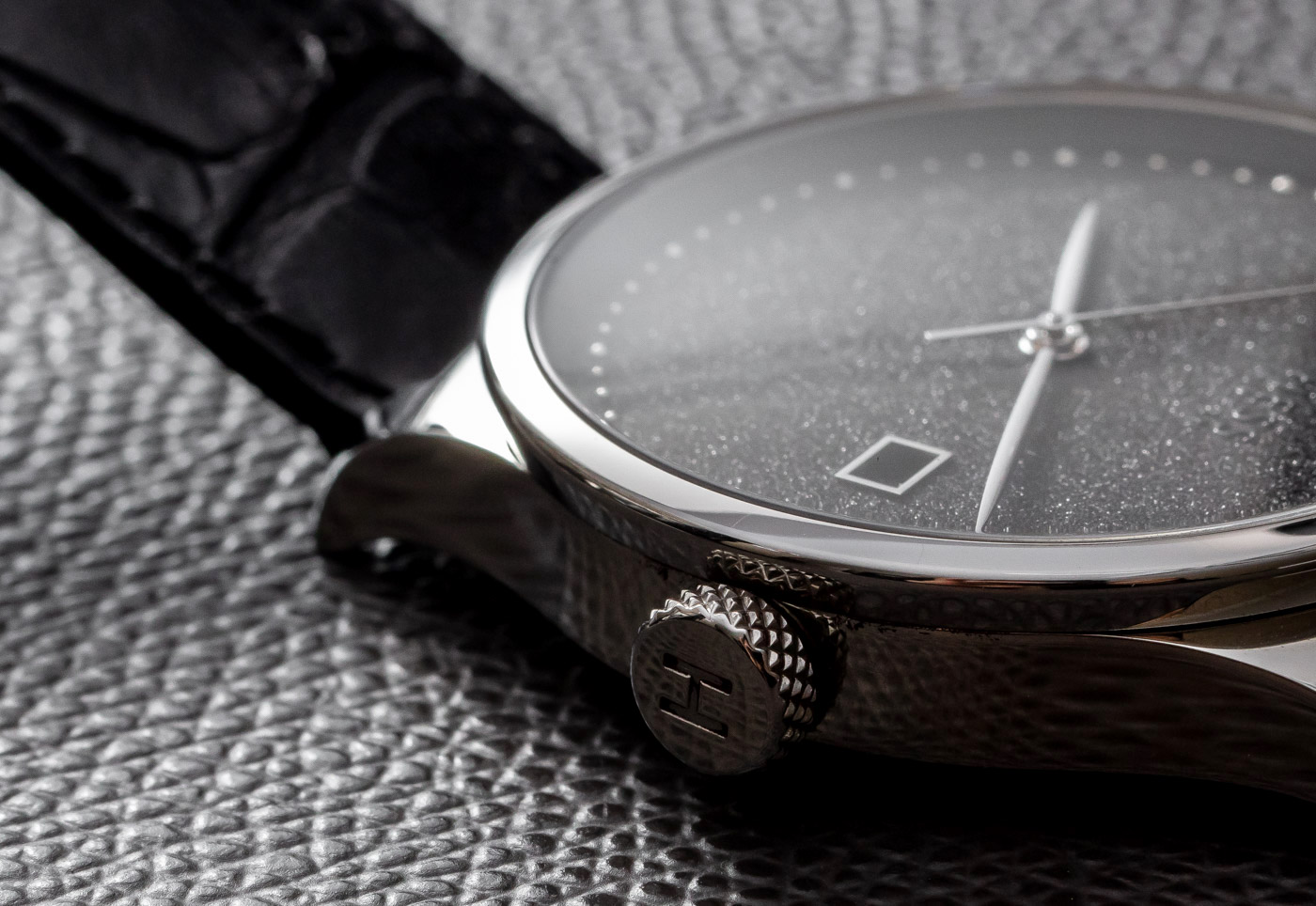 To complete the dress watch theme, attached to the TWO.2 Diamond Dust is an attractive and soft alligator strap. This is a Swiss brand run by at least one serious watchmaker, and I appreciate the mixture of conservative design elements and a focus on some uncommon element such as an argon-filled case, as well as the use of the diamond-dust dial. Hess likely uses as many Swiss suppliers as possible, which more likely than not resulted in the perhaps higher-than-expected retail price of this watch. Hess isn’t aiming, per se, at just watch collectors, but also the many people who continue to flock to Lucerne (where other watch groups such as Bucherer are located) to purchase Swiss timepieces. As a dress watch for men, the TWO.2 Diamond Dust isn’t cheap, but it does have a unique mixture of subtle design elements and a bit of celebratory shine. For those who want a real Swiss dress watch but not one offered by one of the usual brand suspects, then have a look at Hess Uhren Luzern. Price for the Hess TWO.2 Diamond Dust Black Rhodium is 10,300 Swiss Francs.Learn more at hessuhren.ch.

Necessary Data
>Brand: Hess Uhren Luzern
>Model: TWO.2 Diamond Dust Black Rhodium
>Price: 10,300 Swiss Francs
>Size: 39.4mm-wide, 11.4mm-thick, and approx. 47mm lug-to-lug distance.
>When reviewer would personally wear it: As formal dress watch to be worn on celebratory occasions.
>Friend we’d recommend it to first: Design and luxury lovers less interested in name brands and more interested in hip, uncommon products that allow them to feel as though they have discovered something others have not.
>Best characteristic of watch: Diamond-dust dial is nice to look at and other dial elements are also well done. Unique instance of having a bit more effort into the horological elements such as gas-filled case.
>Worst characteristic of watch: A bit too much glare on the crystal removes elegance and legibility of dial. Case polishing should look less chromed and the case is a bit on the thick side. Would benefit from an exhibition caseback. Comparatively speaking, price will appear high when matched with a lot of the existing competition.