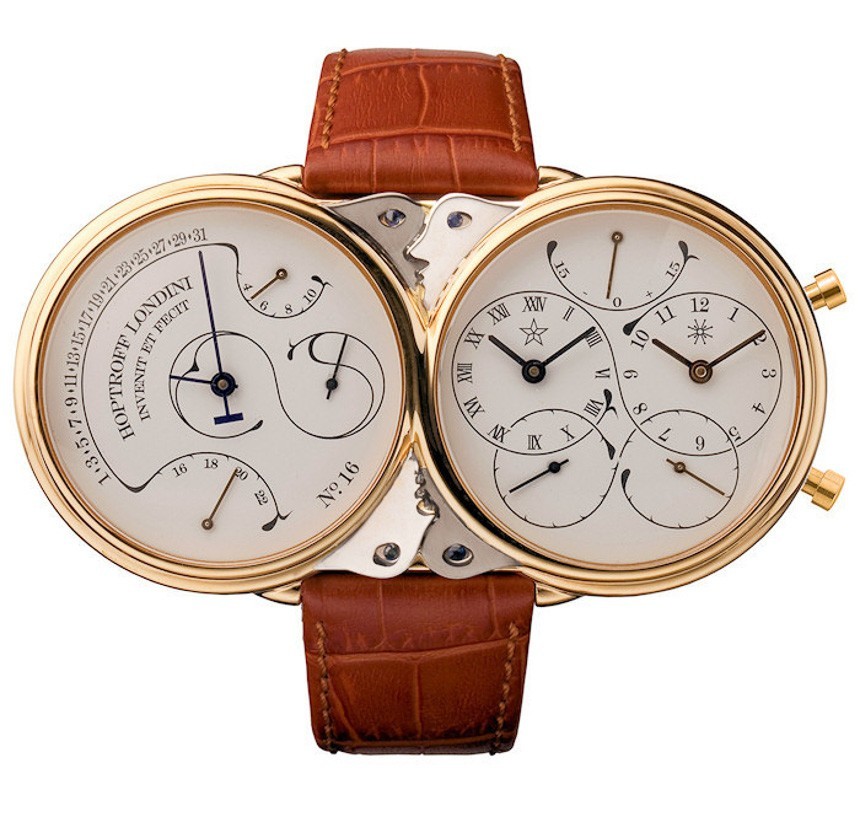 While Richard Hoptroff can be credited with producing the world’s first timepiece with an on-board atomic clock, it was Bathys Hawaii that officially produced the first atomic clock wrist watch. Hoptroff wasn’t too happy about that, as I understand it, so he pushed forward to have the first commercially produced atomic clock wrist watch with the Hoptroff No. 16 (I want to know what the No. 15 looked like). At 83.7mm wide, the No. 16 isn’t exactly for the weak-wristed. Though, it is wearable, given that all that size is horizontal. The watch is a wearable 43.4mm tall, and 18.7mm thick. Why so large? Well it needed to incorporate the Symmetricom CSAC of course.

Hoptroff attempts to give this admittedly nerdy wrist watch gadget a bit of an old world flair with its classically derived design. Hoptoff even claims to have been influenced by the late and great English watchmaker George Daniels and his astronomically-themed Space Traveller timepiece. In order to give the Hoptroff No. 16 atomic wrist watch less visual mass, Hoptoff separates the case into two side-by-side dials, in a watch that is slightly reminiscent of the MB&F Horological Machine No. 1 (HM1). Hoptoff claims that this design scheme is meant to remind  people of the figure eight infinity symbol – which the double dials technically are if you look closely. There are also sort of creepy looking faces that look at each other between the two dials. You can see more of the infinity symbol theme on the dials themselves. 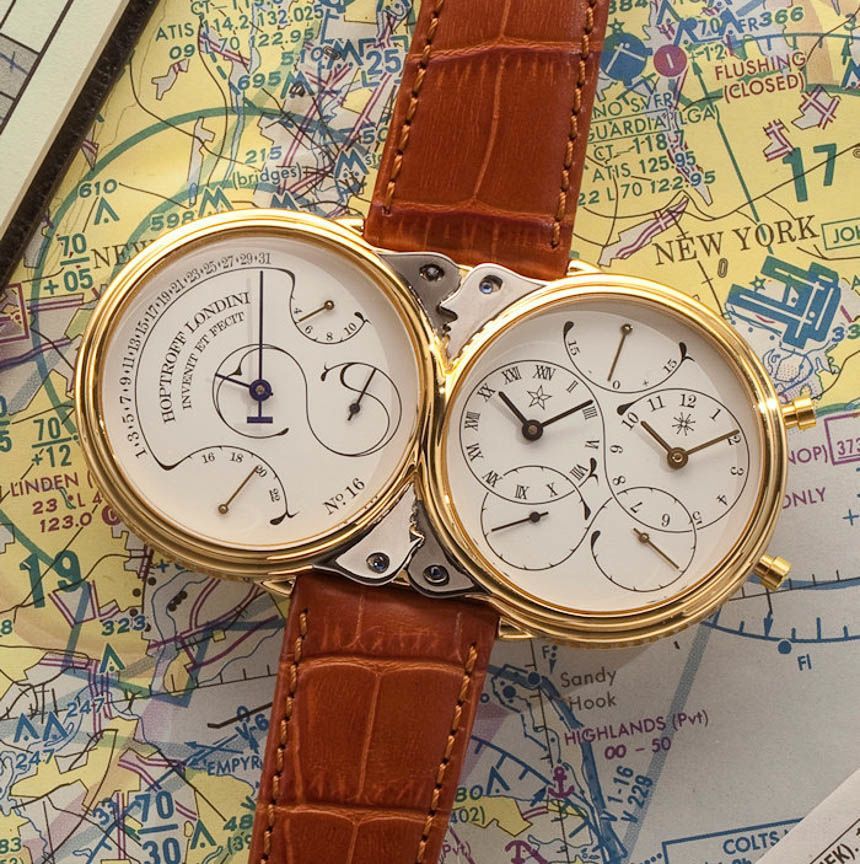 Only the subsidiary dial, to the right of the right part of the case, indicates the current time. Under it is a seconds indicator for the main time. The rest of the watch is dedicated to a collection of other indicators that range from useful to emotional. A good example of the latter is the sidereal time indicator that is adjacent to the main time, as well as the equation of time indicator at the top of the right dial.

The left dial includes information such as the date, phase of the moon, power reserve of the battery, and the sun rise and sun set times. Again, this information is mostly actually useful, and relatively elegant in its display. It is odd to have such a technologically focused watch dressed with a traditional design. I also don’t think watchmaker F.P. Journe will be particularly happy with Hoptoff borrowing his brand slogan, “Invenit Et Fecit” (invented and made), which is on the dial.

Gadget elements abound though. Remember those faces that I mentioned? They glow in order to indicate the passing of each minute, as well as to indicate the different atomic modes. Using full power the Hoptroff No. 16 atomic wrist watch is, as I said above, accurate to 1.5 seconds each 1000 years. Want the battery to last longer? Hoptroff includes a low power mode where the Hoptroff No. 16 atomic wrist watch is accurate to just 10 seconds each 1000 years. Gee, you can barely plan your day with that type of accuracy, right?

So how long does low power mode last? Here is where the Hoptoff No. 16 Atomic Wrist watch can beat all the smartwatches currently on the market (or coming soon). We’ve estimated that the upcoming Apple Watch will have a solid 12 hours of charge, but Hoptoff promises a solid three months of battery life between charges in low power model. Even if high power mode is much less efficient with battery life, I can’t see it needing to be charged more than once a week. 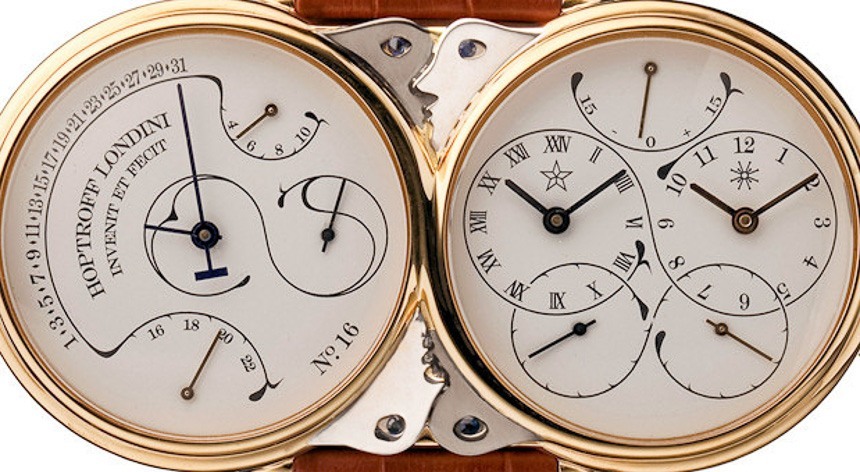 OK, so even if the Hoptoff No. 16 atomic wrist watch is super accurate, how do you set the time and calendar information? Hoptoff has designed the Hoptroff No. 16 atomic wrist watch to be updated via Bluetooth, so I am guessing you use your smartphone, which in turn, uses the appropriate time from the global positioning satellites, that in turn, take the time from other atomic clocks.

As unsettlingly weird as the design of the Hoptoff No. 16 atomic wrist watch is, I have to give credit where credit is due – it could have gone a lot worse. The watch does look actually wearable, and while not really modern in its design. it does do everything it says it does… even if it does so in a way that looks like I am staring at a dress watch from the 1980s with double vision.

Richard Hoptroff will only produce 100 pieces of the Hoptroff No. 16 atomic wrist watch as a limited edition. Each will be produced as they are ordered, with a three month lead time. The case materials available for the watch are Britannia Silver (a non-tarnishing silver), 18k gold, or 950 platinum. According to Hoptroff the Hoptroff No. 16 wrist watch will be officially launched at SalonQP 2014 in London in November. Price without tax is 8,150 GBP (about $13,350) in silver and 15,000 GBP (about $24,600) in 18k gold. No word yet on platinum pricing.  hoptroff.com