I feel the need to talk about this event, even though I attended it in June (of 2007). I read WatchTime magazine and learned about a watch dinner (Inside Basel World) that was to be a recap of the events and news of Basel World 2007. For those of you who don’t know, Basel World is the big watch trade show of the year held in Switzerland. The opportunity to attend an event like this in San Francisco was too appealing. $60 with dinner and a “goody bag?” Yea, I could not resist. It was being held about a month before I took the bar exam, at which point I would have done just about anything to get my mind off studying. 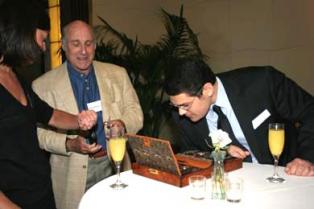 Wearing a suit to the event, I assumed correctly how I am supposed to dress. To the left is a picture on their website of me staring in some aficionado’s watch case. What I wasn’t prepared for was being one of the only guys not “double wristing” it. A watch on each arm, that’s right. Furthermore, the combined value of most of the watches on people’s two wrists was worth more than my law school education. I wore just the Temption, nice and understated, but rare enough that no one knew was it was.

I was the youngest person there by far, and trying to spark up conversation was not going anywhere. A couple of guys “closer” to my age were obviously left over dot com boom millionaires. I over heard them talking about their next $50k watch or sports car. The rest of the lot were mostly older types who obviously had nothing to talk about expect spending money. This one gentleman walked up to one of the watch booths (mind you no selling was going on) and simply asked which was the rarest and most expensive, and that he would buy it. The woman at the booth rolled here eyes and gave the same marketing speech she had a few times before.

On one occasion I asked someone a technical question about the power reserve lengths of watches. I more or less knew the answer, but I wanted to see these guys talk. I was given a rather long and uncomfortable answer by another watch admirer standing next to the booth. The minute he finished, he awkwardly walked away, without a “nice talking to you” or follow up question. This was likely a case of, “you probably could not afford it anyway” attitude I was getting.

On a plus side, there were some really nice and rare watches I got to try on. It is the same feeling I used to get when reading car magazines. You’d read about concept or new models all year, and then I show up to the LA Auto Show and see them. Like that, but with watches. That night I promised myself that if I ever become wealthy like most of the attendants at the show, I would not alienate people in that way. I mean, it wasn’t even about being snobby, more inclined to assumed aristocracy.

The “highlight” of the night was a Powerpoint presentation over dinner. The host Jeff Kingston, made an overly length lecture on a bunch of new watches that were shown at Basel World. I spoke with Mr. Kingston after the presentation to thank him, he was obtuse and unfriendly. So during the presentation, there was some remark about a new low price level for platinum watches I believe. The watch was shown on the screen, and after indicating that it would go for only “$30k” the audience actually gasped. I rolled my eyes and figured I needed to get out of there.

Overall, I enjoyed what I saw in terms of watches, but really have to evaluate the participants in this hobby. These people were into expensive collectibles, not watches. They didn’t really care about value, and the only people I had a decent conversation with were the people selling, not buying the watches. Still, I have to remember that this show was for lovers of the most exclusive and expensive manufactures, not most of the watches we wear.