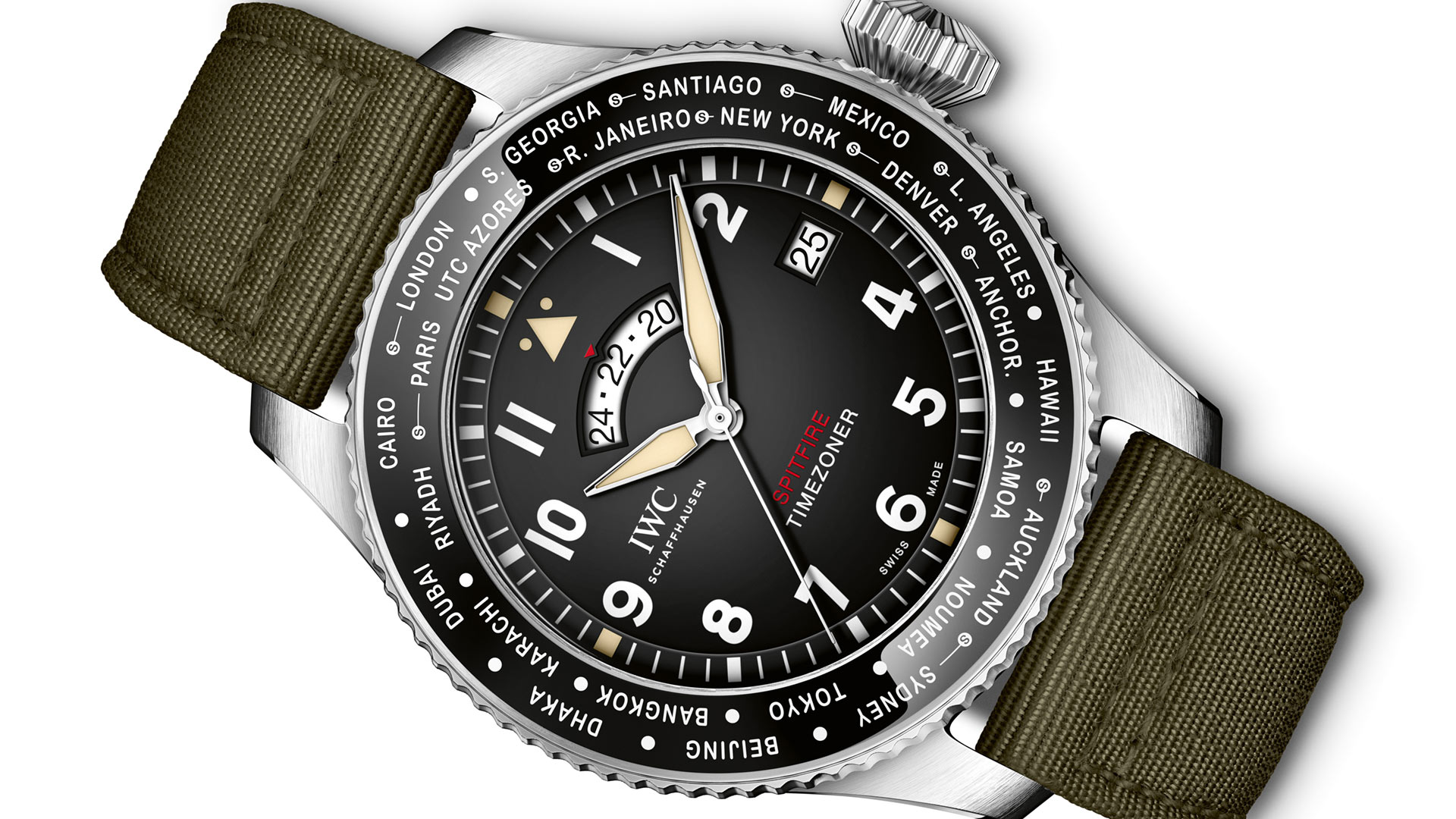 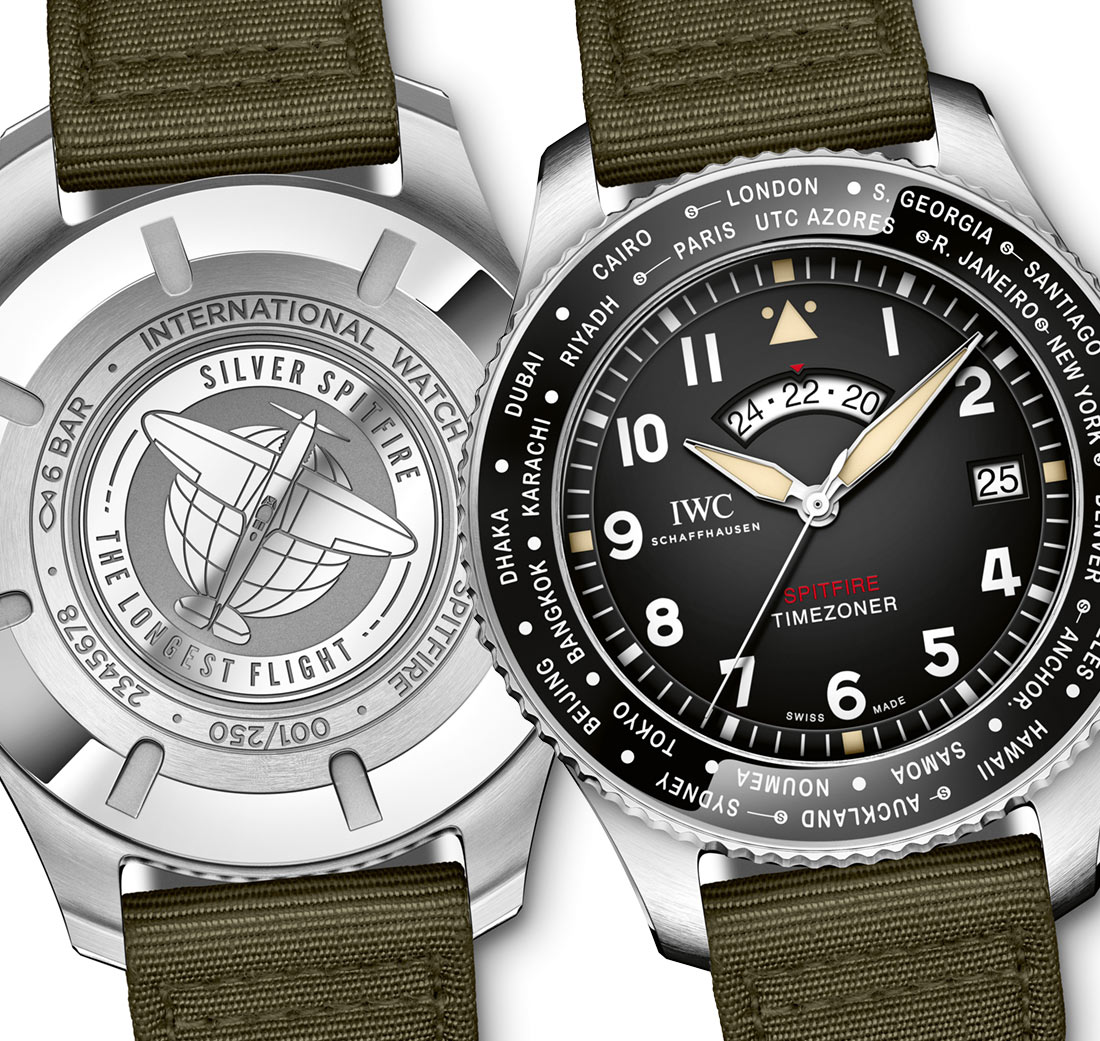 We’re still a little over a month away from SIHH, but that hasn’t stopped many of Richemont group brands from spilling the beans on a few key 2019 releases. The latest to join the year-ending tease is IWC, who has just announced a new limited edition Pilot’s Watch Timezoner (ref. IW395501), as part of a Spitfire refresh which joins three other Pilot releases.

The Timezoner movement with its signature ceramic worldtime bezel made its debut in 2016 with ref. IW3905 – the brand’s first in-house manufactured flyback chronograph with a world time complication. This new Spitfire design cleans up the dial a great deal by omitting the chronograph and red-tipped 24-hour hand in the center of the dial but adds in an altimeter-style 24-hour aperture that we haven’t seen on an IWC Pilot since the UTC TCZ – an excellent, but lesser-known reference from 1998. 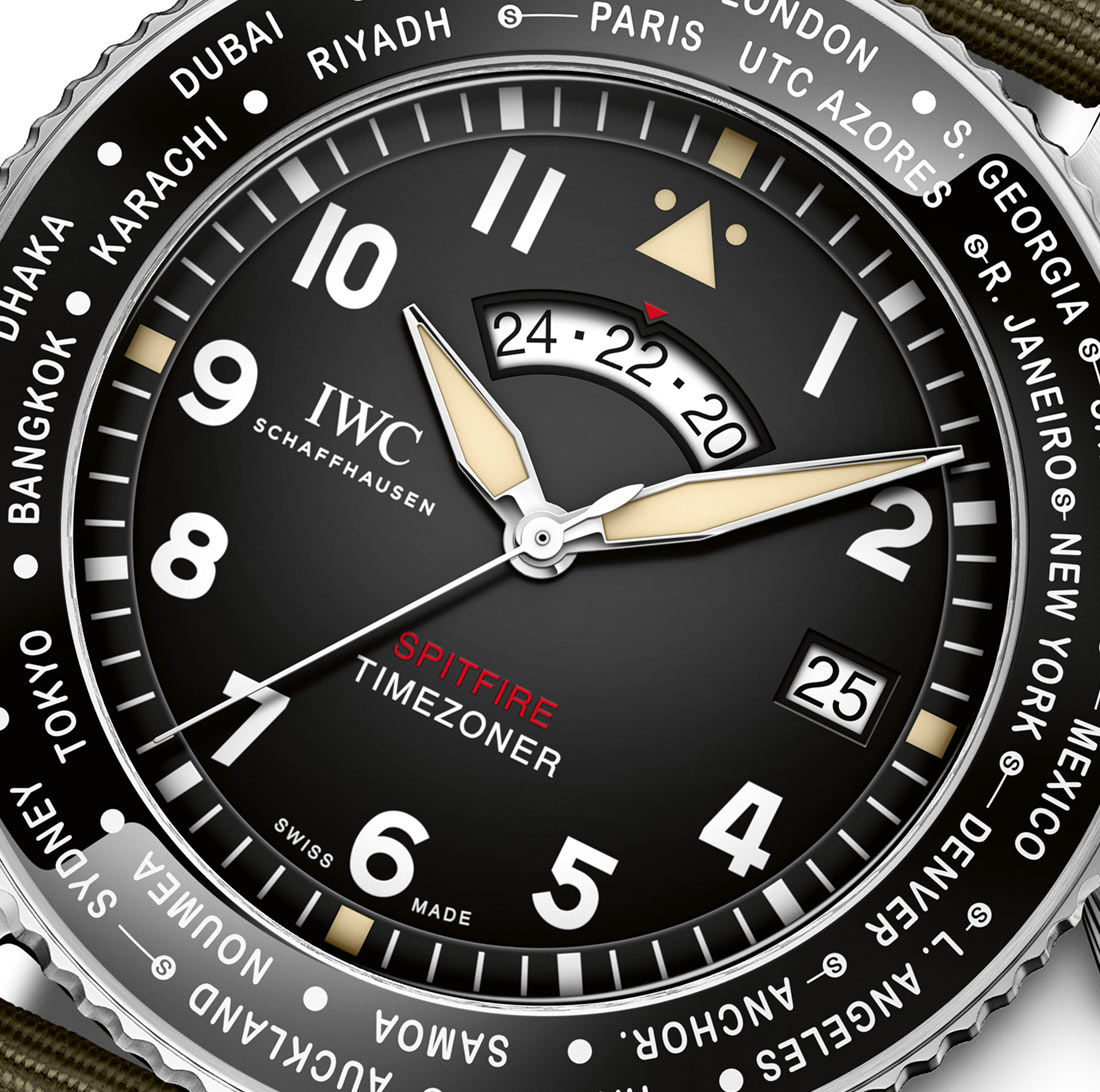 Unlike the discontinued Pilot UTC though, the Timezoner exhibits a cool mechanism that enables the wearer to adjust local time, date, and ‘home’ time, simply by rotating the bezel in either direction. Now, while it’s extremely convenient to be able to so easily adjust to local time upon landing at a new destination, the fact remains that both the local and home times are slaved to each other. This contradicts the beauty of the original UTC – and a number of other ‘true’ traveler or worldtime watches, wherein the hour hand can be adjusted independently of home time, or multiple zones can be read at once. The likely defense of the Timezoner is that its worldtime bezel enables the wearer to easily jump to an unfamiliar time zone simply by rotating it until the present location reads just above the cardinal triangle at 12:00. But the ability to tell the exact time difference between Tokyo and Los Angeles is still lost here, as the 24-hour window acts more like an AM/PM indicator for the current zone than a home time indicator. It doesn’t change the fact that this is still a great traveler’s watch – it’s just far from a true worldtimer despite what the bezel might be visually suggesting.

Now, if you’re as excited as we were to see a simplified Timezoner, or have been holding out for a smaller, more wrist-friendly globetrotting IWC (and who hasn’t, honestly?), you’re going to have to keep waiting. Even with the pared-down complication, the new Timezoner Spitfire still utilizes a 46mm case that’s a little over 15mm thick – which is a bit of a disappointment, but not entirely surprising, because it uses the same bezel. A smaller, more wearable case would likely require an entirely new interface between the movement, gear train, and bezel – and until IWC makes a smaller version of this patented movement, 46mm is here to stay. The lack of the chronograph and the new 24-hour display means the Timezoner gets a new caliber designation: cal. 82760 (the outgoing model used cal. 89760), which uses IWC’s Pellaton winding system, noteworthy for its efficiency and high wear-resistance. 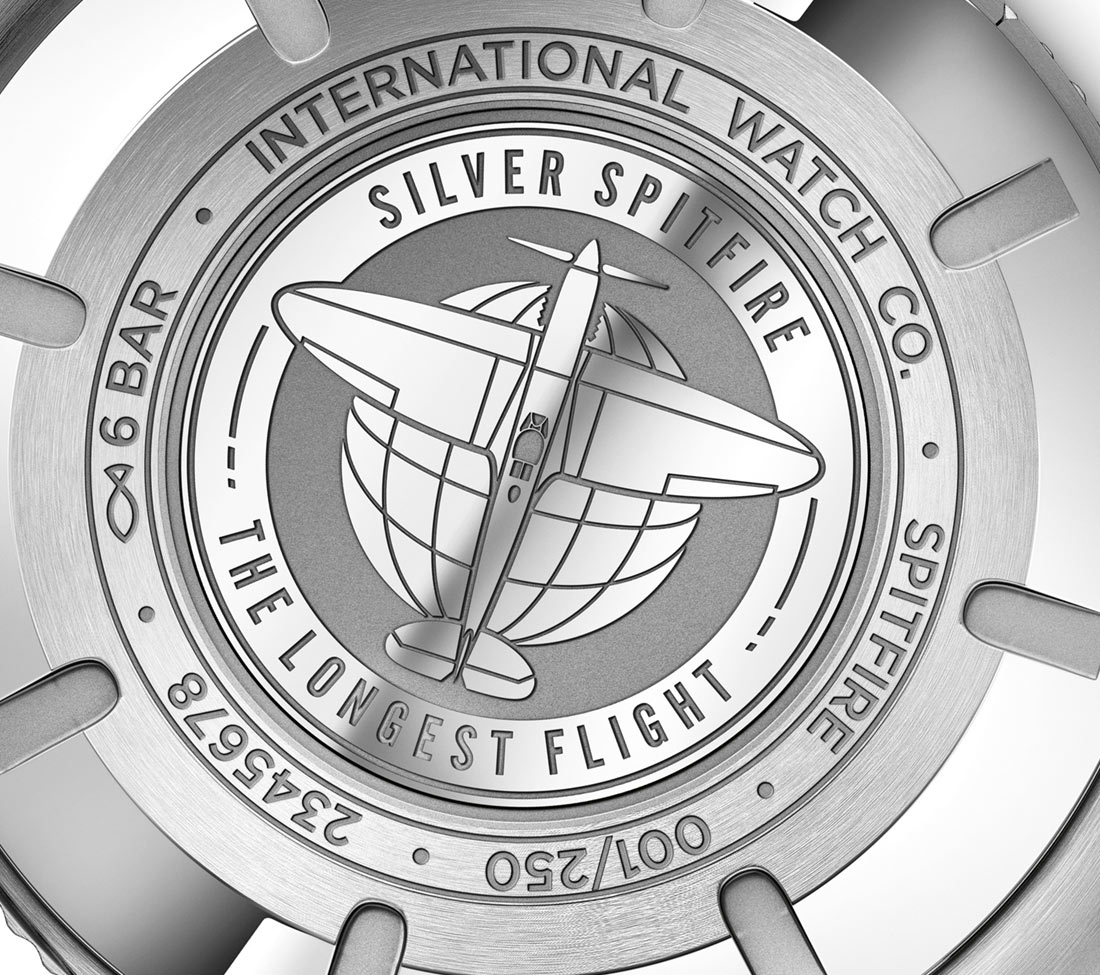 Bearing a similar feature set as the original Timezoner, the new Spitfire edition features a solid caseback, 60 meters (6 bar) water resistance, and an AR-coated sapphire crystal that’s specially seated to maintain an airtight seal despite possible pressure decreases in the cockpit. However, unlike past Spitfire-series watches from IWC which have traditionally had silver dials and applied dial elements, this year’s Timezoner Spitfire is inspired by the inside of the silver aircraft, and now exhibits cream luminous elements and an olive drab green strap. It’s an undeniably great look, and a more rugged look for the dressier Spitfire aesthetic we’ve seen in the past. 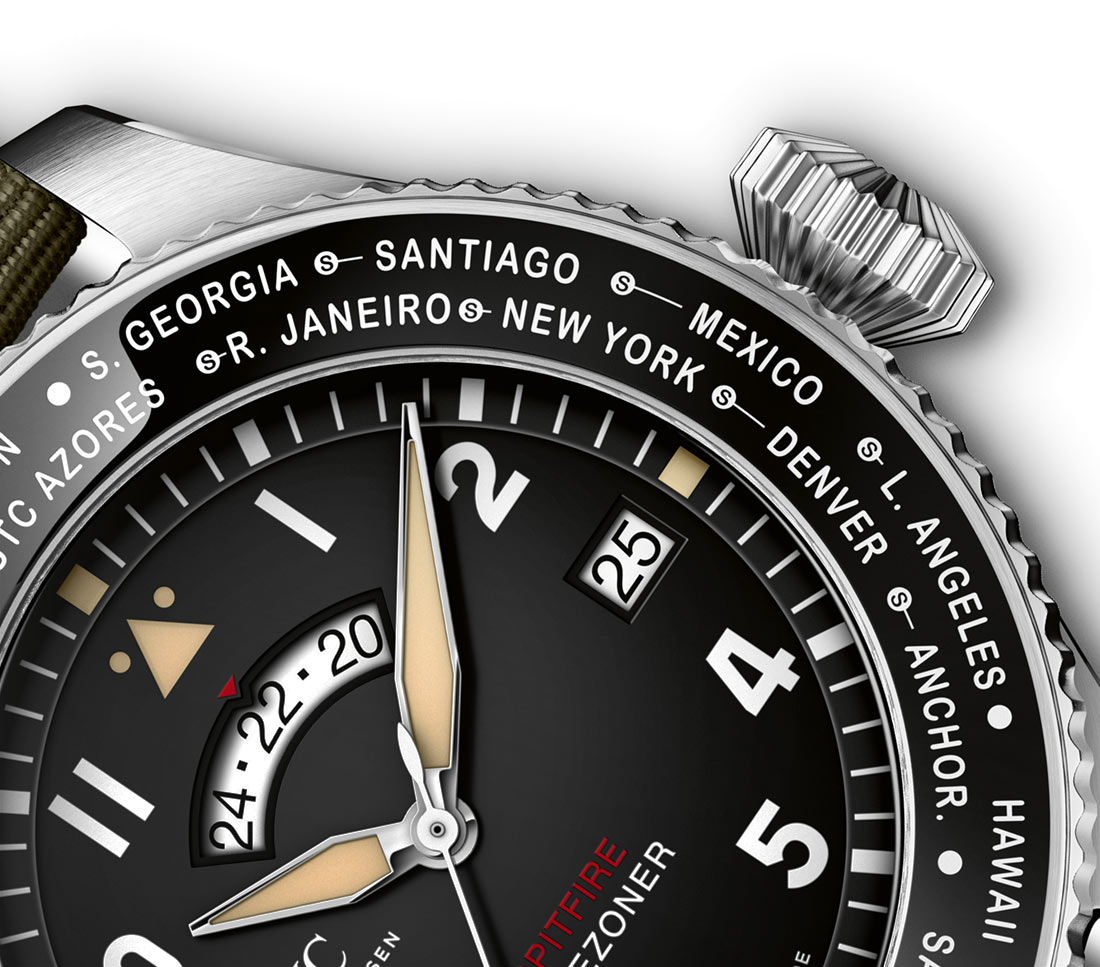 We’re already planning to get plenty of quality wrist time with the simplified new Timezoner at SIHH in a few weeks, and will report back on wear impressions. In the meantime though, the price for each of the 250 pieces of this limited release is expected to be around $13,500. You can find more information about the new Spitfire collection over at iwc.com.