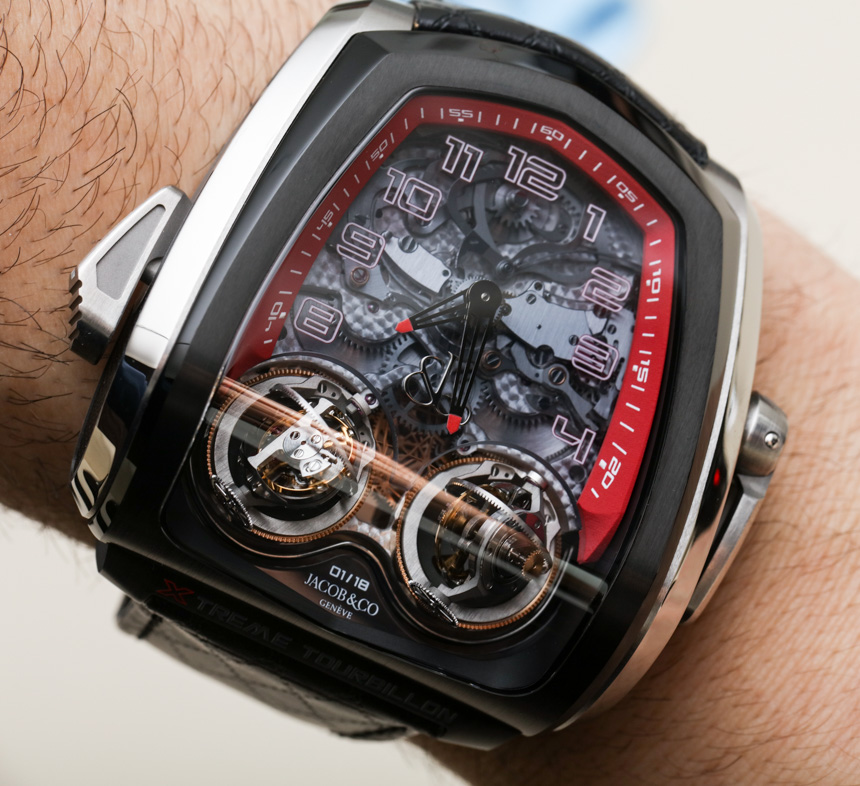 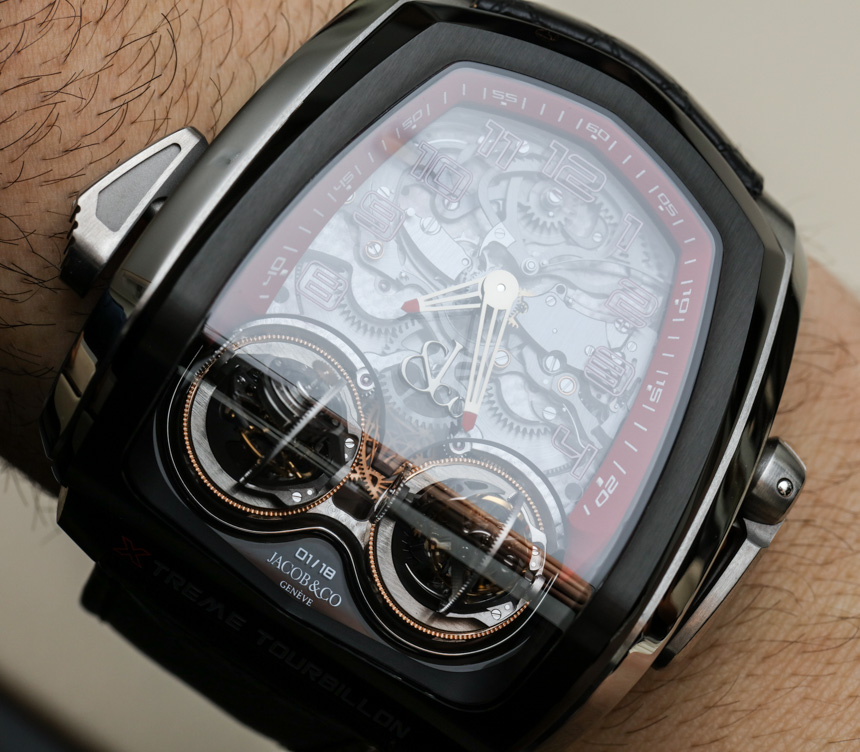 At Baselworld 2016, Jacob & Co. continued to impress with new versions of its visually stunning and uber-complex Astronomia collection, but the real novelty in terms of brand-new “spectacle” watches was the Twin Turbo Twin Triple Axis Tourbillon Minute Repeater. With a mouthful of a name, the Jacob & Co. Twin Turbo Twin Triple Axis Tourbillon Minute Repeater is the best kind of exotic watch insofar that it exists as the poignant answer to a question no one has seemingly ever asked before. And that question is, why isn’t there a minute repeater watch with dual triple-axis tourbillons?! 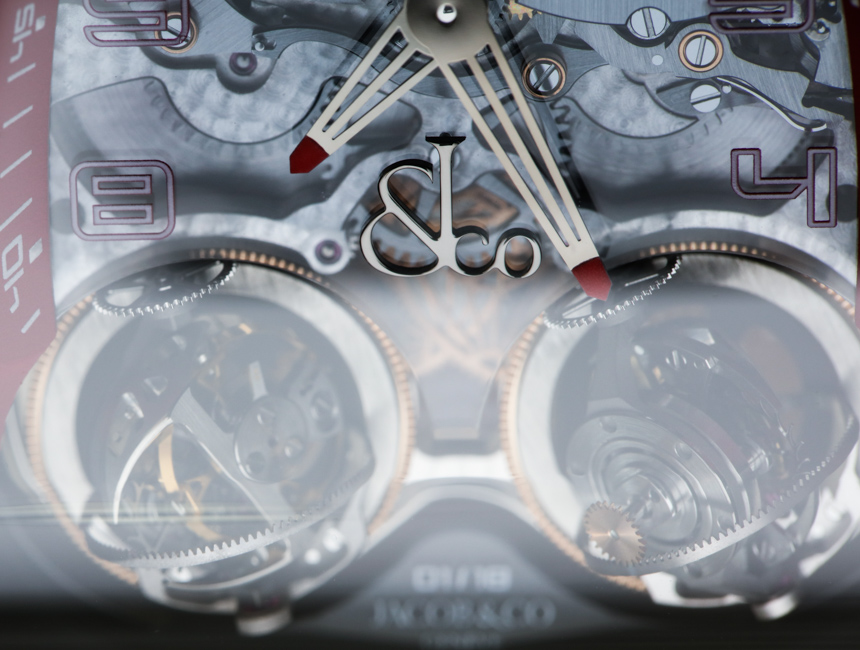 For the sake of brevity, I will refer to the Jacob & Co. Twin Turbo Twin Triple Axis Tourbillon Minute Repeater as the “Twin Turbo,” in order to spare you from having to keep reading the long name of the watch that to utter out-loud requires at least one (and perhaps two) pauses to take a breath. This is just the type of spectacular and complex horological novelty that Jacob Arabo is known for making. What purpose does it serve? Good question. My evaluation of why Jacob & Co. continues to produce technically fascinating watches like this is to continually offer his demanding customer base something new, awe-inspiring, and truly unorthodox. Love it or hate it, the Jacob & Co. Twin Turbo exists among a small pantheon of timepieces which keep the wildness we so love in high-end wrist-worn machines alive.

I’ll readily admit to initially putting the Jacob & Co. Twin Turbo watch on my wrist backwards with the bottom facing up. It isn’t immediately obvious that the wedge-shaped super watch is meant to have the twin tourbillons facing you and the dial for the time slightly further away. Alas, the concept of the Jacob & Co. Twin Turbo watch is to keep the the twin triple axis tourbillons starting at you like freaky animated eyes at all times.

Exclusively designed and produced for Jacob & Co. in Switzerland, the new caliber JCFM01 manually-wound movement is composed of 572 parts and operates at a frequency of 3Hz (21,600bph) with a power reserve of 72 hours (3 days). Produced from mostly steel and titanium, the movement is thoroughly viewable through both the front and rear of the watch. What you see here is an unfinished prototype, and according to Jacob & Co., things like the dial transparency and crystal AR-coating have not yet been finalized. It is very common that even after a watch movement is completed, there will still be copious levels of adjusting and tweaking to finishes and other design elements before the final watches are shipped to the customers. 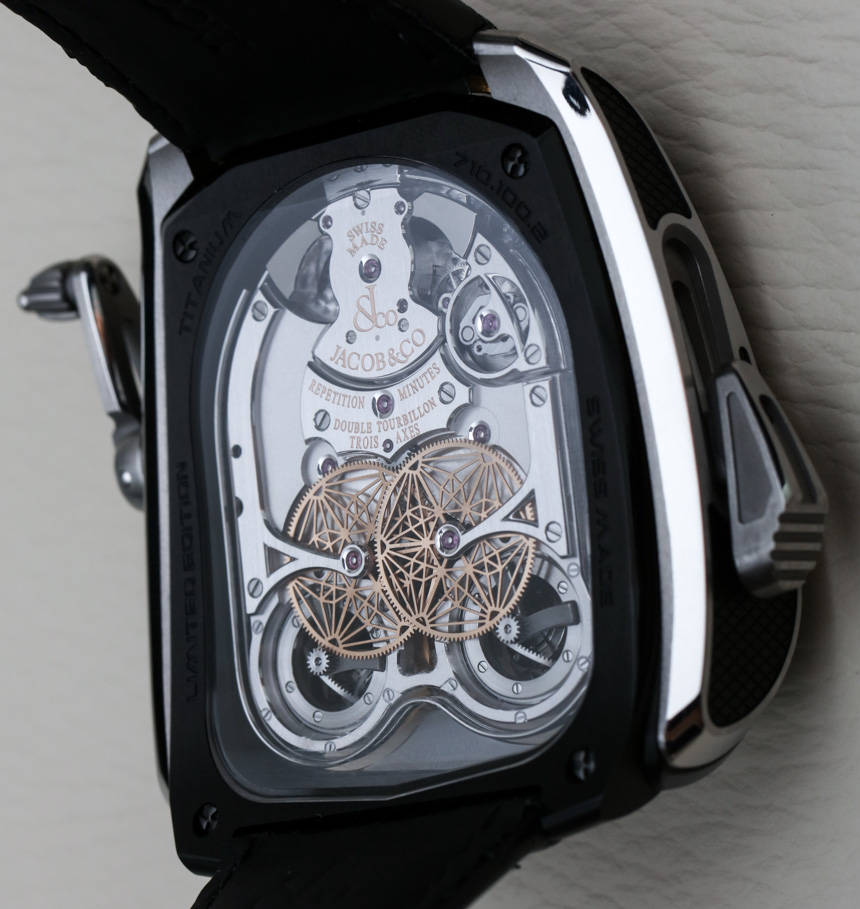 The JCFM01 movement indicates only the time with minutes and hours. The tourbillons all operate on non-60-second sequences so you can’t really read the seconds from the watch. Then again, why would you? The tourbillons that sit next to each other each turn on three axis points, and each is a “flying” axis point, meaning that there isn’t a bridge involved. The first tourbillon axis point rotates each 40 seconds; the second, each 8 minutes; and the third, each 3 minutes. There is a differential between the two tourbillons which means that their timing rates are averaged out. 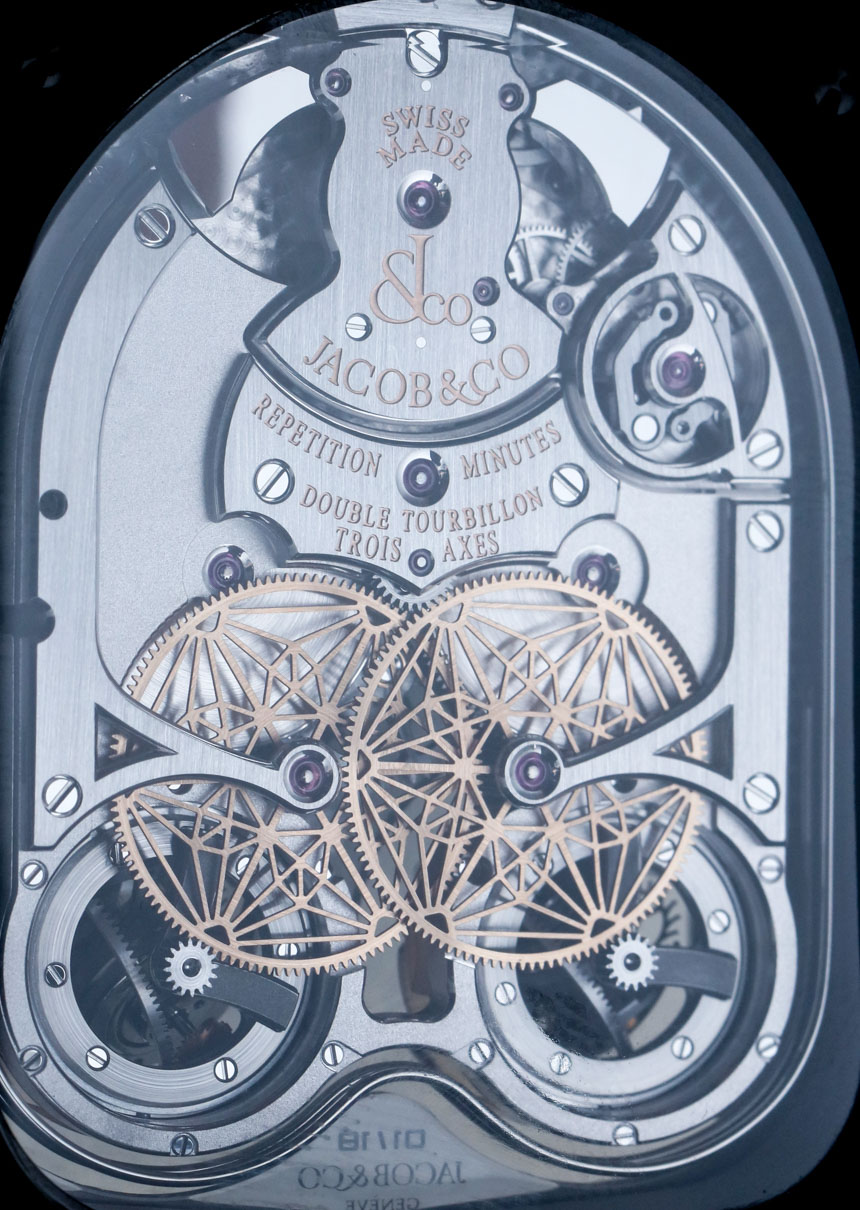 Nothing about the tourbillons adds functional value or accuracy to the timepiece. If anything, the impressive element here is that, despite having two triple axis tourbillons, the movement is still able to indicate the time. Then, there is the matter of the impressive sounding cathedral-style minute repeater. The two hammers hit the uniquely-shaped gongs with a decent level of resonance thanks to the large case cavity and mostly titanium construction. What is further interesting about the minute repeater is that it is a decimal repeater versus a quarter repeater. That means when indicting parts of an hour the chimes ring out 10-minute segments as opposed to 15-minute segments. This is meant to help the minute repeater be easier to read. At least, that is the idea. 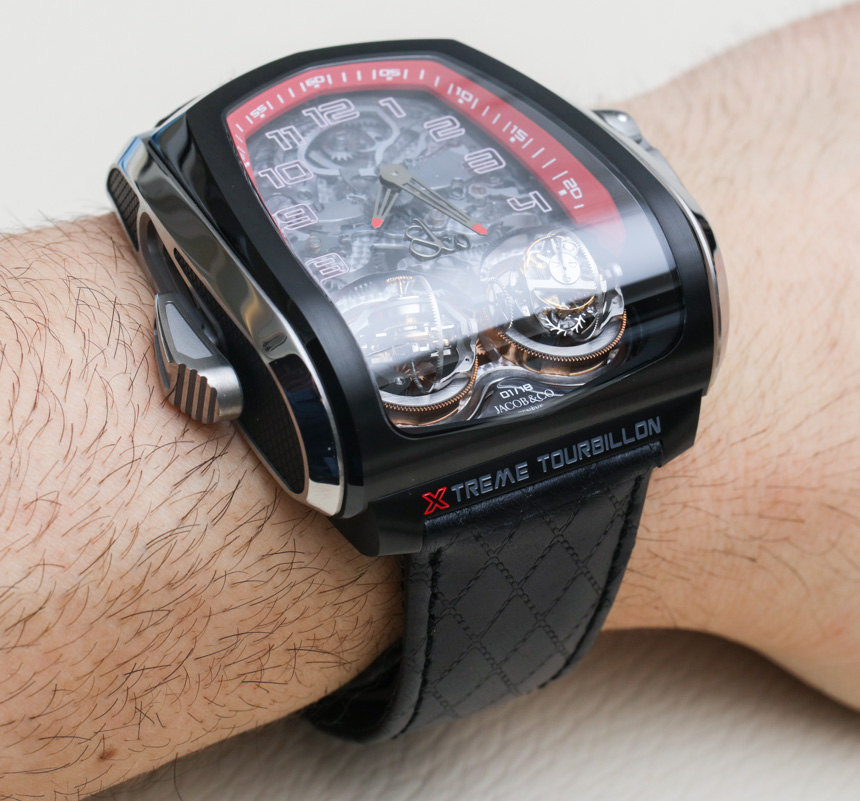 The hand-finished mechanical movement is contrasted with a very modern case and dial design which clearly feels “racing world-inspired.” The red flange ring and modern font used for the hour numerals is not something you’d expect to find on a watch of this complexity and ilk. With that said, I think enough complicated watches follow a deeply classic design philosophy, so it is good to see more watches with sophisticated movements like this which are more contemporary in their visual appeal. Timepieces like the Jacob & Co. Twin Turbo Twin Triple Axis Tourbillon Minute Repeater help round out the market, as far as I am concerned. 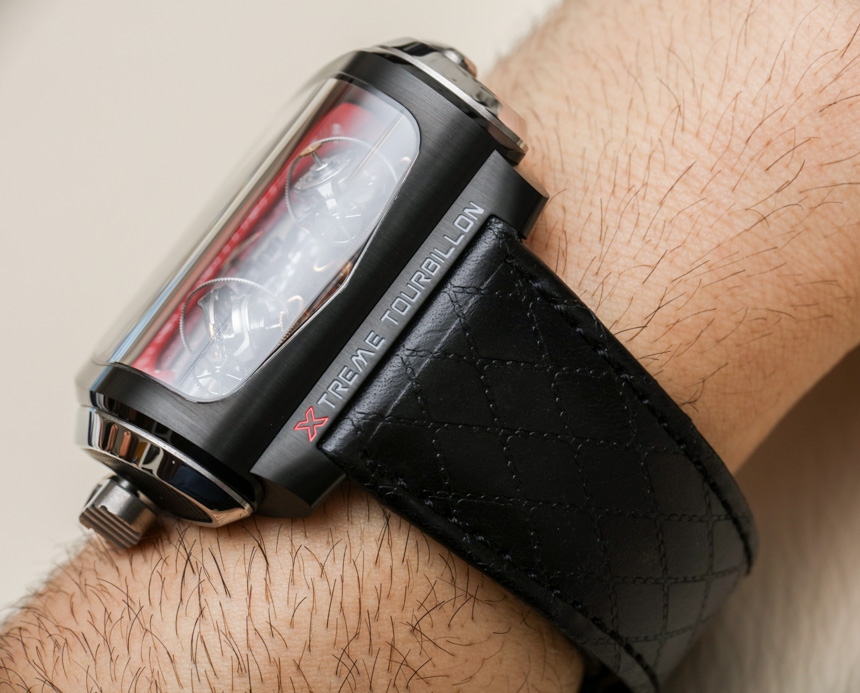 The case for the Jacob & Co. Twin Turbo Twin Triple Axis Tourbillon Minute Repeater watch is 51mm wide and 57.3mm tall by 16.9mm thick. It is produced from grade 5 titanium as well as carbon fiber, and there appears to be textured sections of vulcanized rubber on the sides of the case. The crown to wind the movement or set the time folds out like a crank lever. Unfold it to wind the movement, and pull it out one notch to set the time as you would with any other movement. The case is water resistant to 30 meters, which is not surprising. Too much case material, and the chimes from the minute repeater would be too deadened. 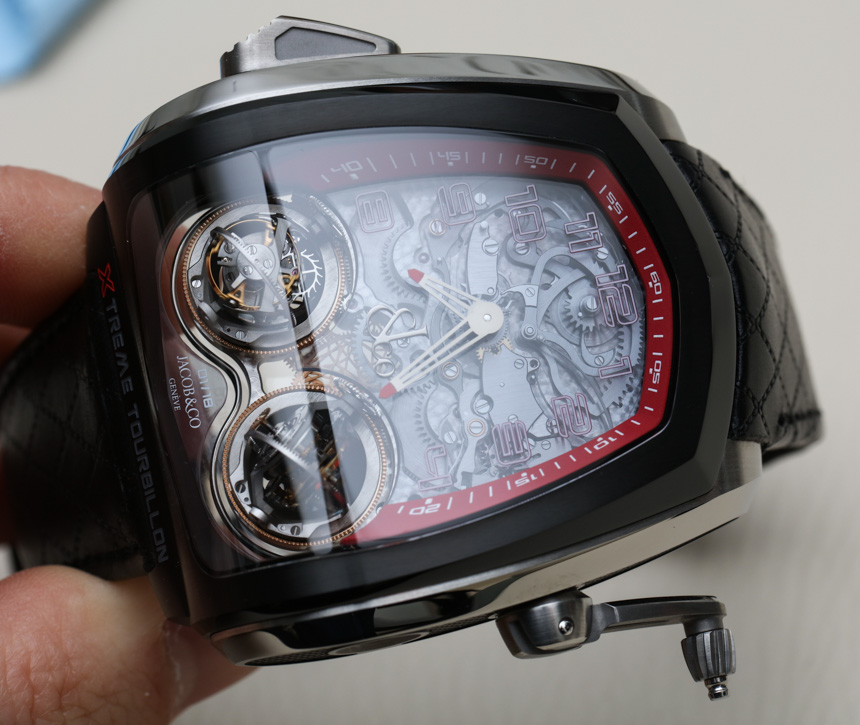