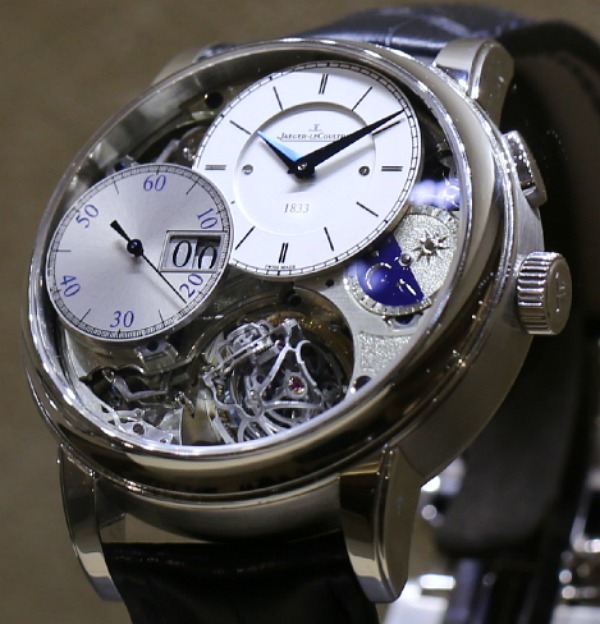 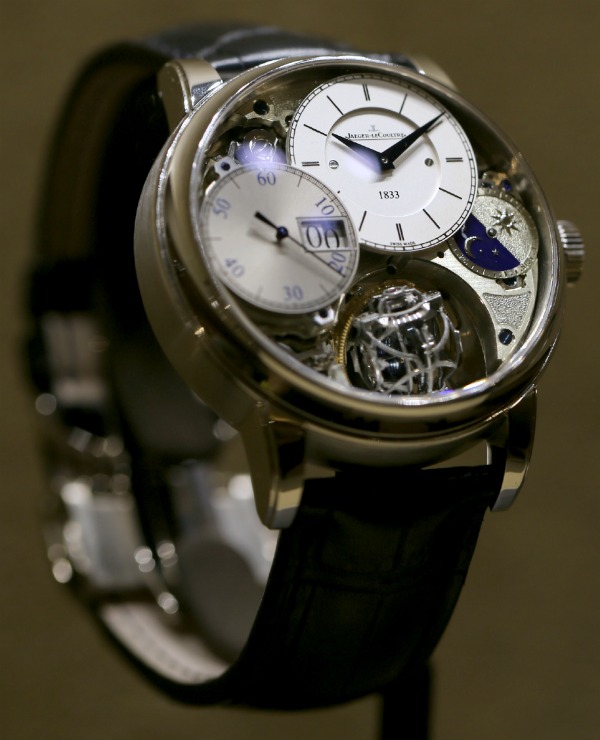 The term “Jubilee” (anniversary celebration) is conspicuously in the watch’s name even though Jaeger-LeCoultre doesn’t mention any specific anniversary around the piece’s release. If there was to be an anniversary it would be of the 180th anniversary of the beginning of what is today Jaeger-LeCoultre back in 1833. That is as much as I can surmise. The Master Grande Tradition Gyrotourbillon 3 Jubilee will be a limited edition of course, as we slowly see production and possible variations over the years. What Jaeger-LeCoultre likes to do is take models like this and dress them up with diamonds in the years after the piece’s initial release. I saw that with the Gyrotourbillon a lot, but actually not at all (or at least not too much) with Gyrotourbillon 2. While it is possible to place diamonds or other precious stones on most any timepiece, no matter how seemingly strange their placement, I do see the Gyrotourbillon 3 as a more “collector” oriented piece that seems to only have diamond-potential real estate on the case (thankfully not on the dial).

Now I mentioned that the Jubilee part of the name didn’t make a ton of sense. That may be so but it does coincide with a small family of other Jaeger-LeCoultre watches that also bear the “Jubilee” name. These extremely complex classical watches are part of the ongoing honoring of Antoine LeCoultre. If you want to purchase the Master Grande Tradition Gyrotourbillon 3 now, you have just three chances and it comes with two other timepieces. It is sure to be a rather heavy investment. The set is the Jubilee Collection and sure to make your watch collection proud by angering your bank account.

Seventy five more pieces of the limited edition set in platinum will be produced over time. More still will likely arrive in other precious metals. The case is generously sized at 43.5mm wide and 15.5mm thick, again what Jaeger-LeCoultre describes as “extra-white” platinum. One area that they focus on quite a bit is the strap – more specifically the deployant. According to my friends at Jaeger-LeCoultre, this timepiece has about 100 pieces in the deployant alone. Giving it the ability to microadjust for comfort, especially as your wrist may expand or shrink given environmental influences. 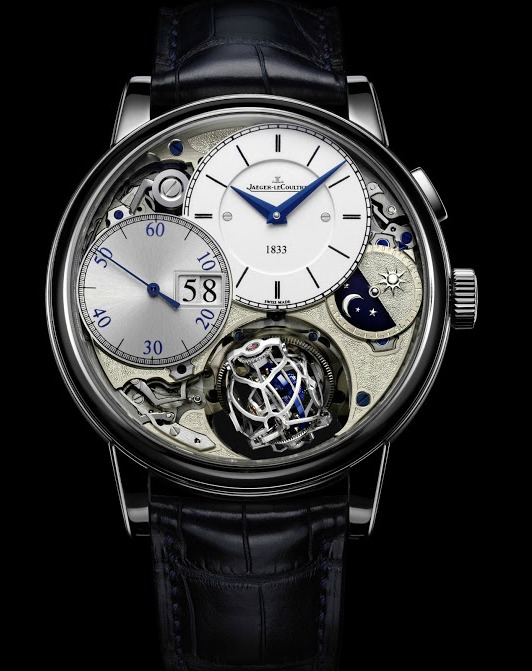 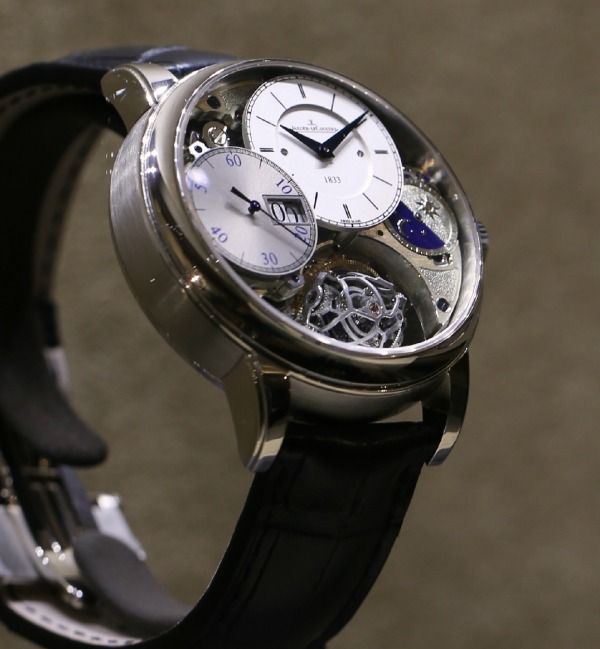 So what exactly does the Gyrotourbillon 3 watch do? Well let’s start by talking about the gyrotourbillon. It was originally developed by Eric Coudray for Jaeger-LeCoultre a few years ago. Mr. Coudray is a rather brilliant French watchmaker who speaks not a word of English and appears to have never visited a barber. Though, Mr. Coudray’s steady hands are legendary and he is a very clever micro engineer. The gyrotourbillon is called as such because it appears to move like a gyroscope. Though in reality it is a two-axis tourbillon in a spherical shaped cage that is mystifying to view in action. The case is so delicate that most people who attempt to assemble the watch will break it. It is light and made from titanium and new for the gyrotourbillon 3, it has a spherical-shaped balance wheel inside of it. Imagine that. The ball-shaped hairspring is a first for wrist watches, and truly completes the spheroid theme of this uber complication. No doubt it is clearly visible on the dial.

Borrowed from the Extreme Lab collection in the same brand, the Master Grande Tradition Gyrotourbillon 3 Jubilee watch also has a digital chronograph. Well a mechanical digital analog hybrid chronograph. If you see that counter in what looks like a subsidiary seconds dial then you are not seeing a big date indicator but rather a minute counter for the monopusher chronograph. That subsidiary dial is the seconds register for the chronograph. The watch does not offer the date nor a subsidiary seconds dial for the time as it appears to. Rather, this timepiece has the time in an off-centered dial, day/night indicator disc, and this unique chronograph. The marriage of these complications together is most likely unique, and it is truly something new. Ultra niche of course, but not necessarily intended to be practical beyond stimulating the horological region of watch lovers’ brains.

While the Gyrotourbillon is not readily a Jaeger-LeCoultre at first look and is no doubt a whimsical timepiece, it does satisfy in a way that only Jager-LeCoultre timepieces can. As I will likely repeat in the future, they are among the only brands at SIHH 2013 to release even a new movement, and not just at this high-end range. For me, JLC is currently an under appreciated brand (though fervent enthusiasts will deny that they contain somehow more appreciation somewhere), and is a true innovator in a space so frequently marked by sessility. jaeger-lecoultre.com 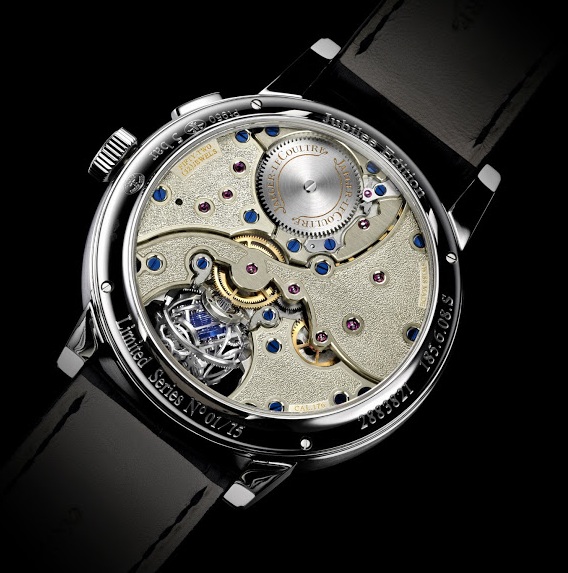