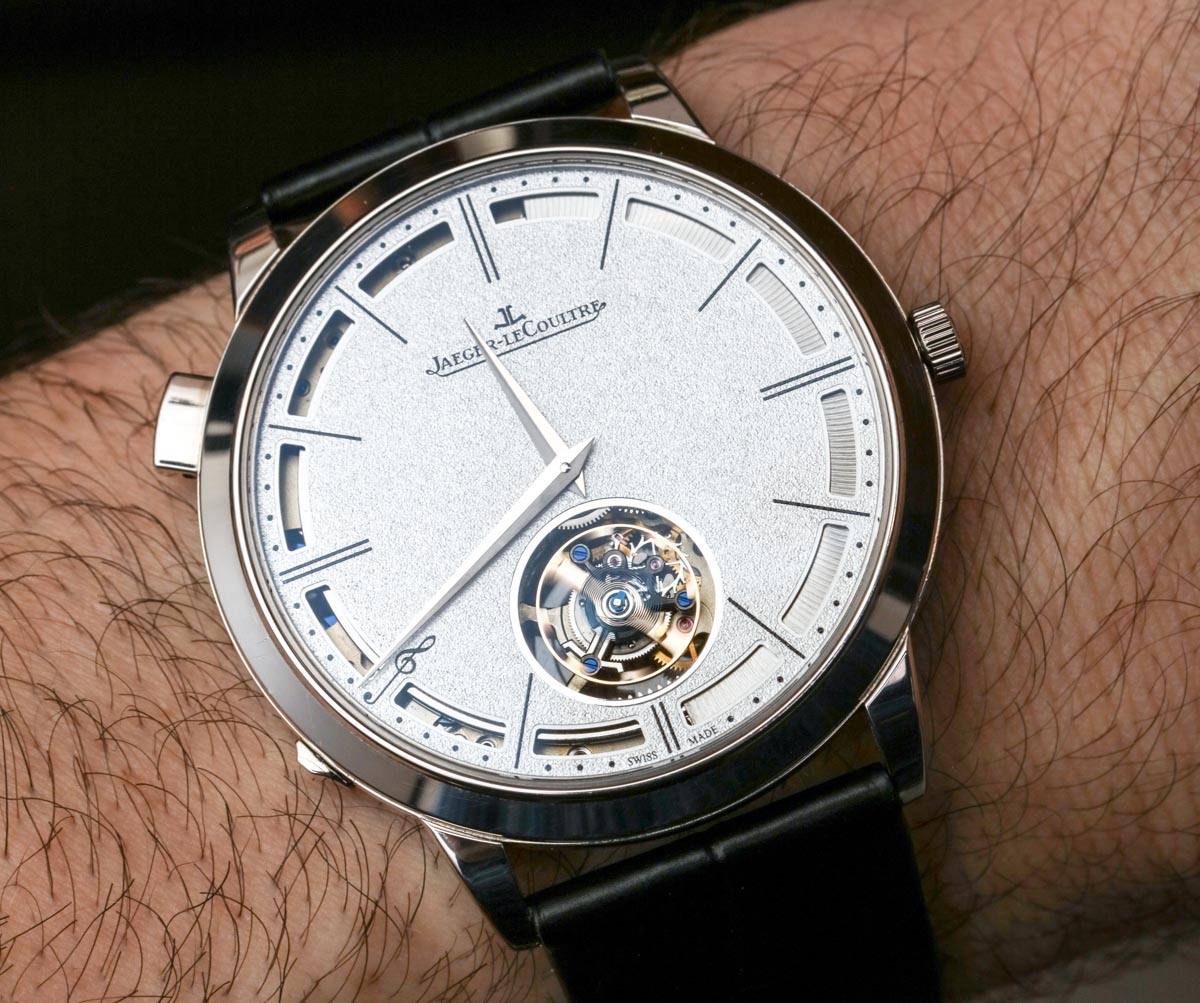 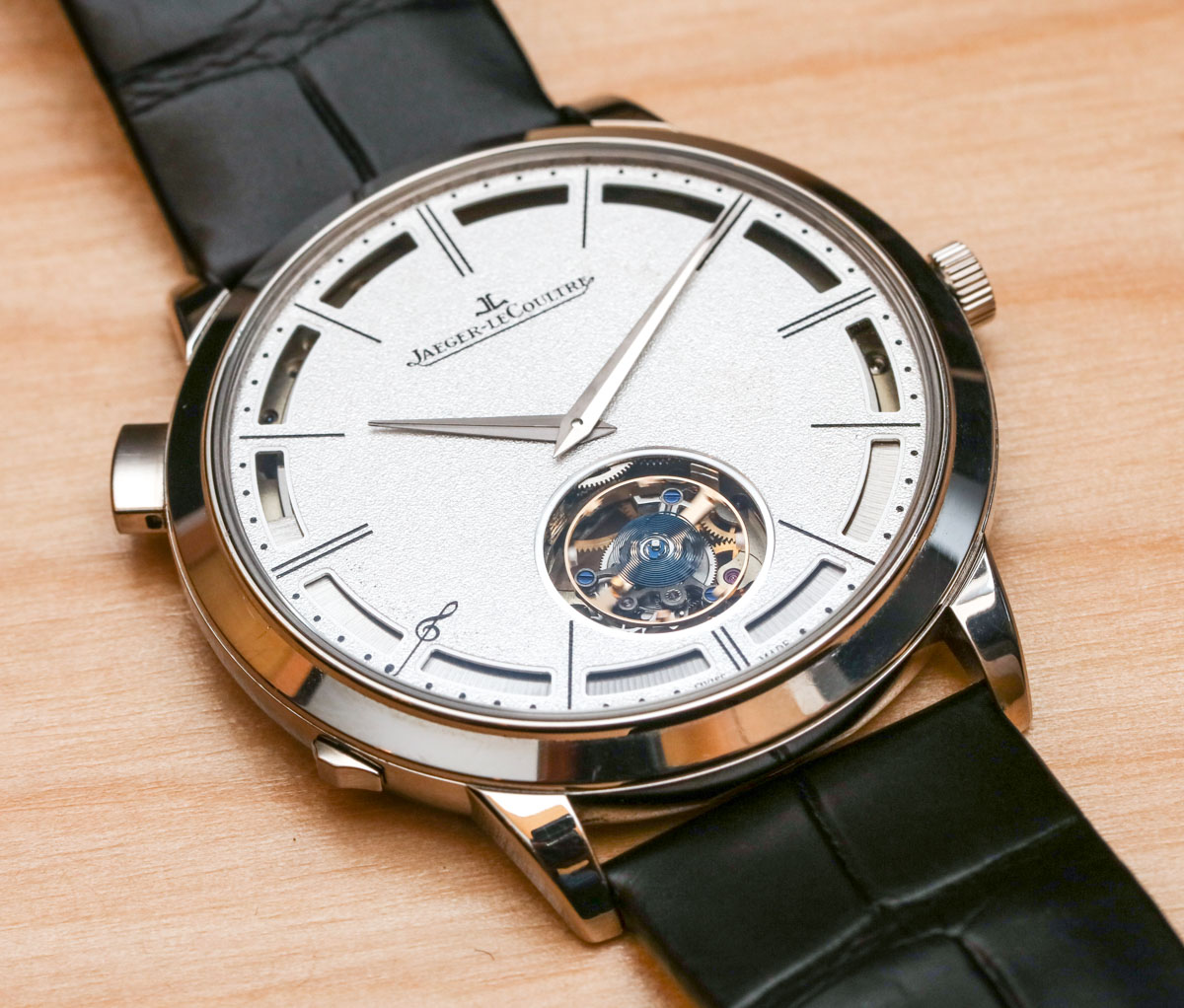 There is something effortlessly cool about a thin, classy, elegant watch fitted with top-tier complications and the Jaeger-LeCoultre Master Ultra-Thin Minute Repeater Flying Tourbillon Hybris Mechanica 11 is just that – and a long name. 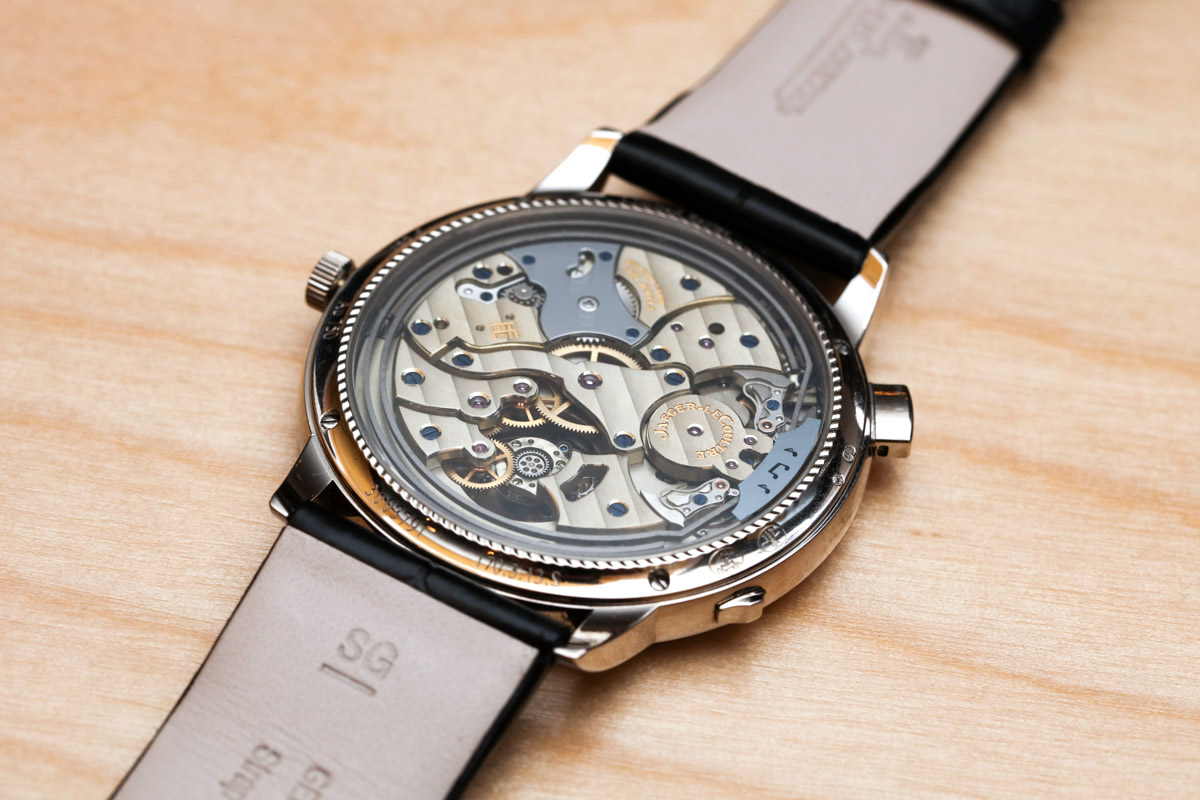 Thin watches are in. “They’ve always been in!” – you could argue, and you’d be right, but it is only lately that we’ve seen a notable rise in their popularity as a weapon of choice among manufactures. Prime examples to both types are Jaeger-LeCoultre and Bulgari. Where finishing and tourbillons and complex chimes brands struggle to explain (and are often at odds with explaining what a tourbillon is and does, with “it defies gravity” being an absolute pet peeve of mine), thinness everybody understands. Everybody with the slightest inclination for watchmaking gets that there must be something particularly challenging to making a watch thin, thinner, thinnest. Hybris Mechanica is Jaeger-LeCoultre’s line of watches dedicated to horological muscle flexin’, and the Master Ultra-Thin Minute Repeater Flying Tourbillon is one of the latest pieces introduced in it, although it made its debut back at SIHH 2014. I saw the watch at another SIHH briefly, but it was Ariel who took these shots at Watches & Wonders 2018. We wish more brands would carry their halo pieces from previous years to shows as it’d be great to see these impressive models, developed at great effort and cost.

At the time of its release, the Jaeger-LeCoultre Master Ultra-Thin Minute Repeater Flying Tourbillon Hybris Mechanica 11 was the thinnest watch to combine automatic winding, tourbillon, and minute repeater – and I don’t think that record has been broken by anyone in the last 4 years, not even with Bulgari pushing the limits of thinnest automatic watch, thinnest minute repeater, and thinnest tourbillon with its Octo Finissimo line of watches. Impressive work there… Where were we again? 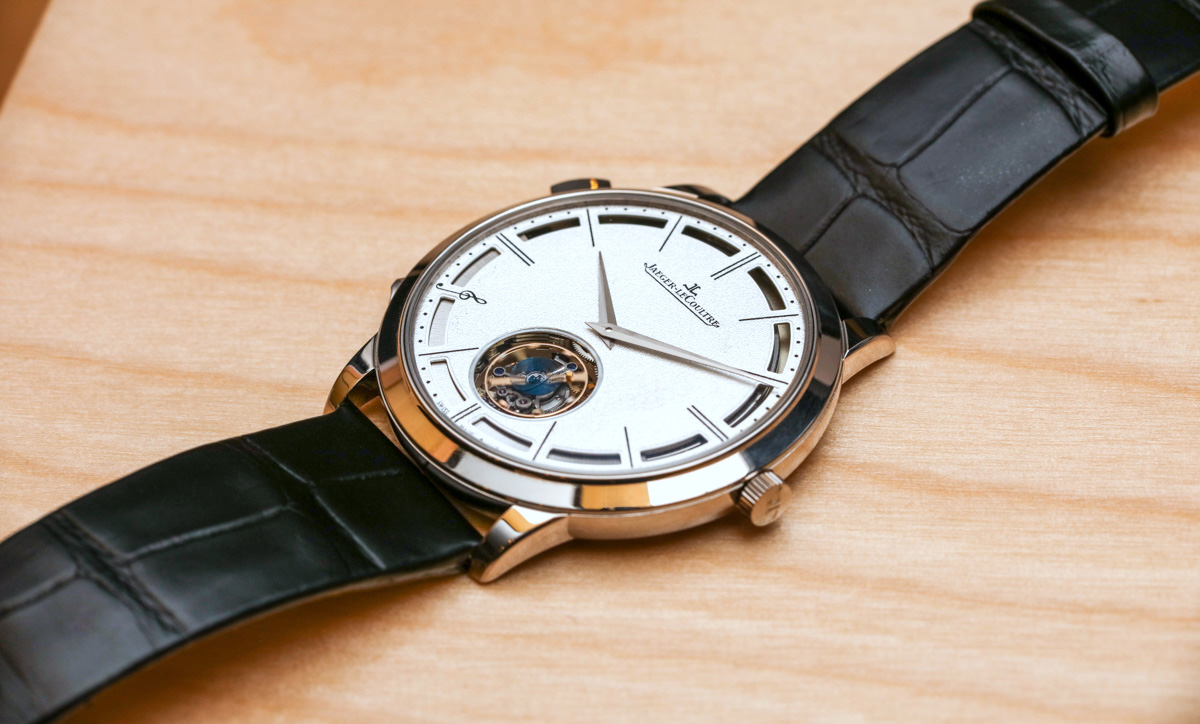 The JLC 362 caliber is composed from a total of 471 parts that come together in a movement that is just 4.8mm thick and 33.3mm wide… I mean, it was 471 parts in the original JLC documents in 2014, but now their website says 566 components. Not sure how or why these numbers inflated over years but hey, it’s good to know there’s a ~5% annual inflation rate in haute horlogerie movement component counts. Nevertheless, the case somehow could accommodate the higher number of parts and remains 41mm wide and 7.9mm thick, which, again, is a record for a watch with this combination of complications. The 18k white gold Master case with its unassuming, if not a bit stale, round bezel and short, stubby lugs creates the perfect underwhelming frame to imply “Hey, you! Look inside the case, not at it!” Look inside the case – at the dial, its openings, its tourbillon, or even just the dial itself – one consequently does and the real Hybris Mechanica fireworks begin. 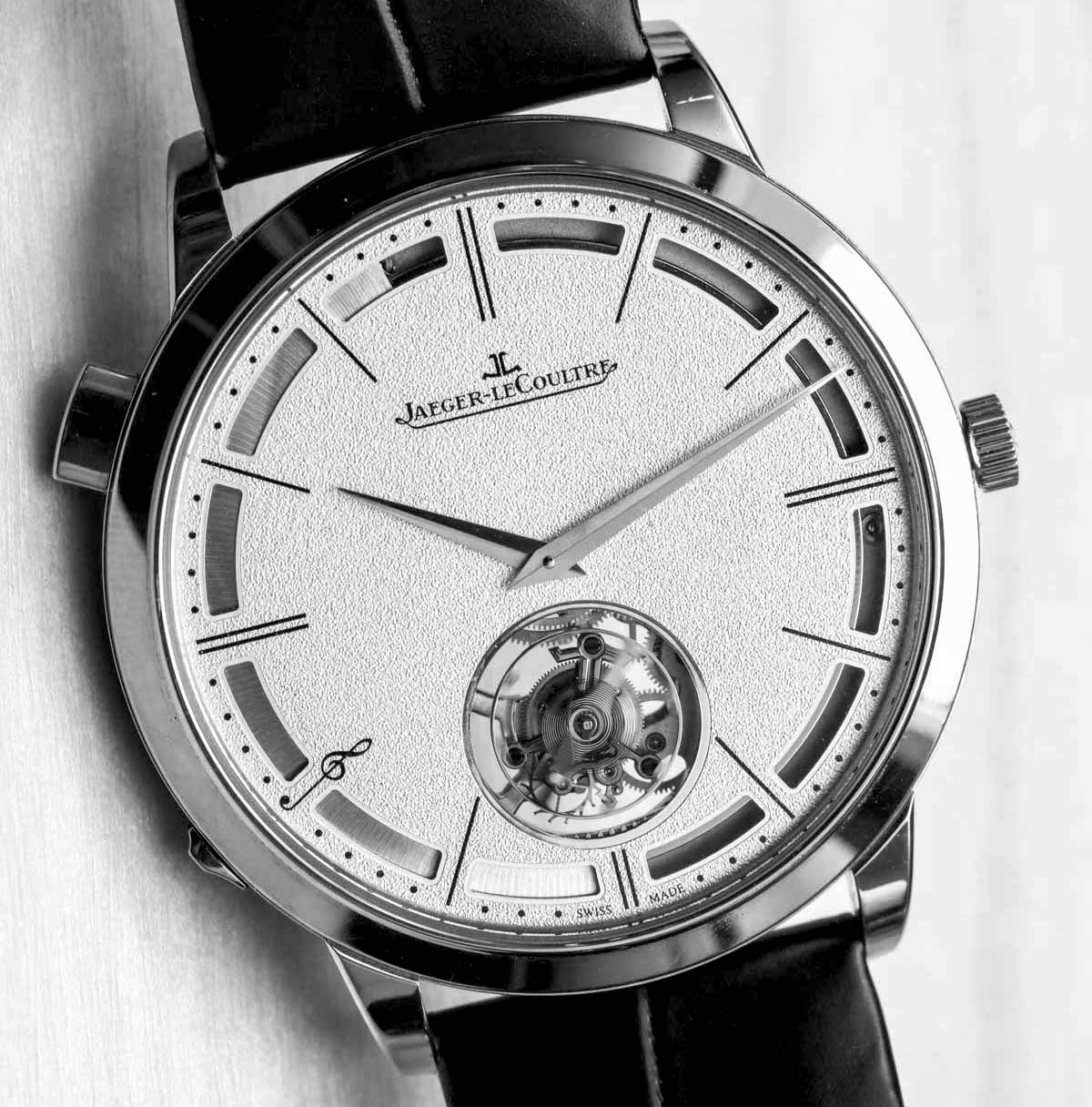 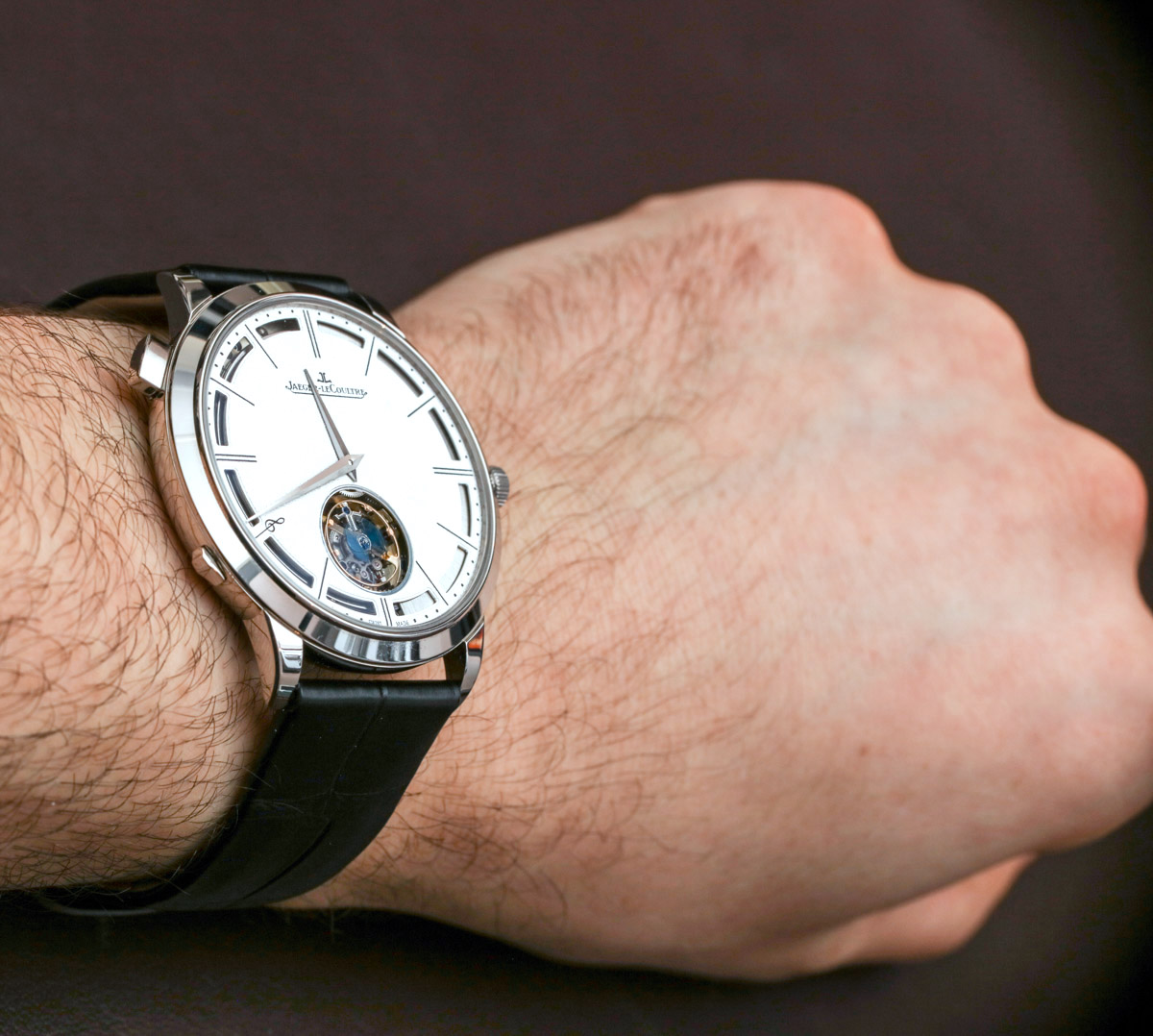 To keep the thickness at its minimum, Jaeger-LeCoultre designed the 362 caliber with a peripheral winding rotor that they, adding yet another twist, placed on the dial side. To show this feat off – and for another reason we’ll discuss soon enough – the dial features 12 cut-outs or openings that allow the wearer to witness the peripheral rotor frantically wonder around the dial as one moves his or her hand. We have seen Perrelets and Romain Jeromes (among others) engineer solutions to show off the movement of the winding rotor, but what JLC did here certainly is the more elegant design. 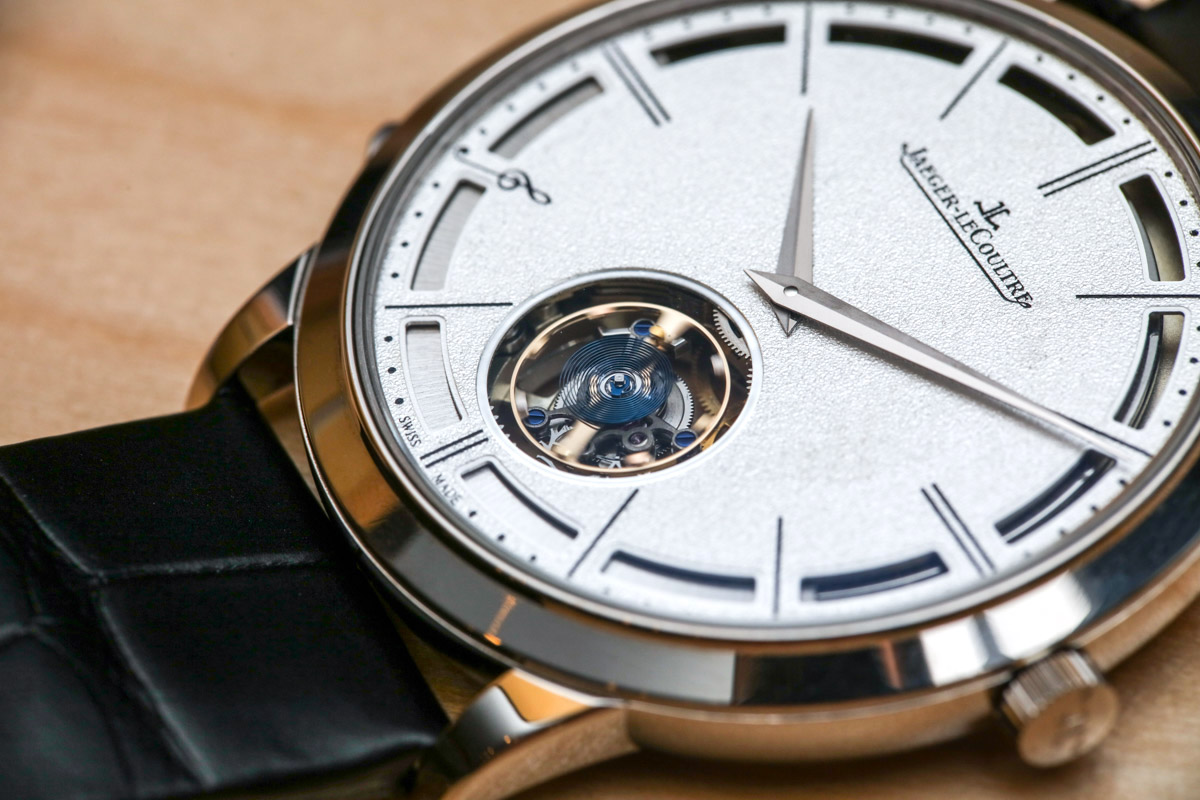 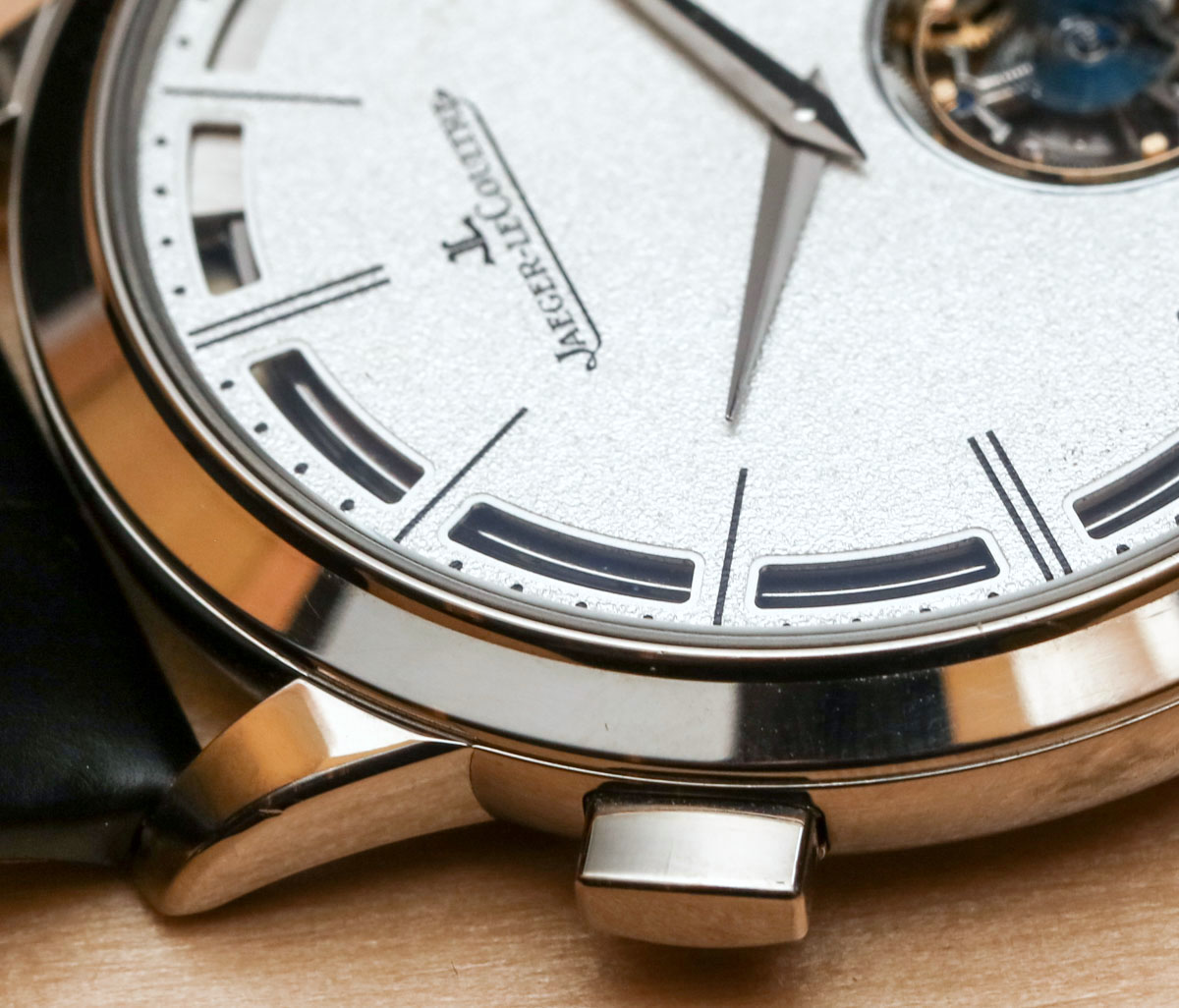 The other reason for the cut-outs is acoustics: this way, when the rotor is not over them, the gongs that wrap around the movement and are struck by the hammers of the chiming mechanism are exposed, letting sound through the dial and making the chimes that much more audible. Speaking of the chime: the minute repeater retains a well-earned position among the most challenging and complex horological complications – but this, apparently, couldn’t keep JLC’s watchmakers and engineers away from fiddling with it through yet another twist. Whereas the minute repeater starting by a pusher rather than a slider already is a twist, they even engineered a small slider into the same side of the case that allows the wearer to deploy the pusher when he intends to use the chime. When not in use, the pusher remains pushed in after it’s been used – and it is only after the slider was put to use that the pusher is delivered to the discerning wearer. An impressive feature designed to further improve on the wearing experience – and further complicate the minute repeater. 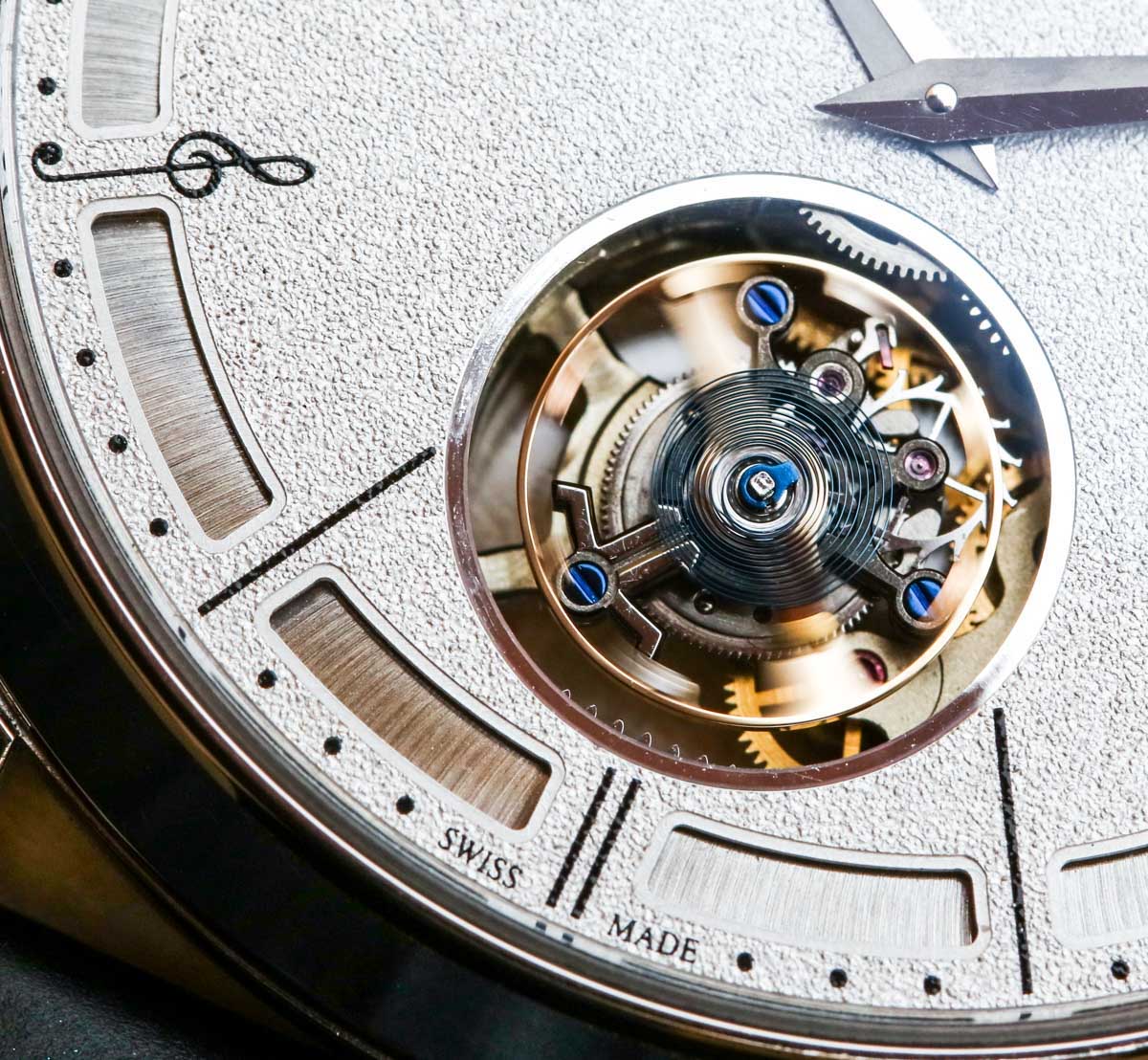 In case all this wasn’t enough, there also is a flying tourbillon on the dial, adding another source of animation beyond the partially displayed peripheral winding rotor. Although the piece Ariel photographed certainly is a showpiece, I think we’ll agree that a lot of time has passed since 2014 and perhaps a touching-up would’ve come a long way in making this caliber and the entire watch look as good as it should. Plenty of scratches and lint were on show on many parts of the movement and dial side – but, again, this being a showpiece is of course much less of an issue than if it were a customer piece. All this said, the “JL” logo on the tourbillon cage and the blue overcoil spring are all very cool indeed. 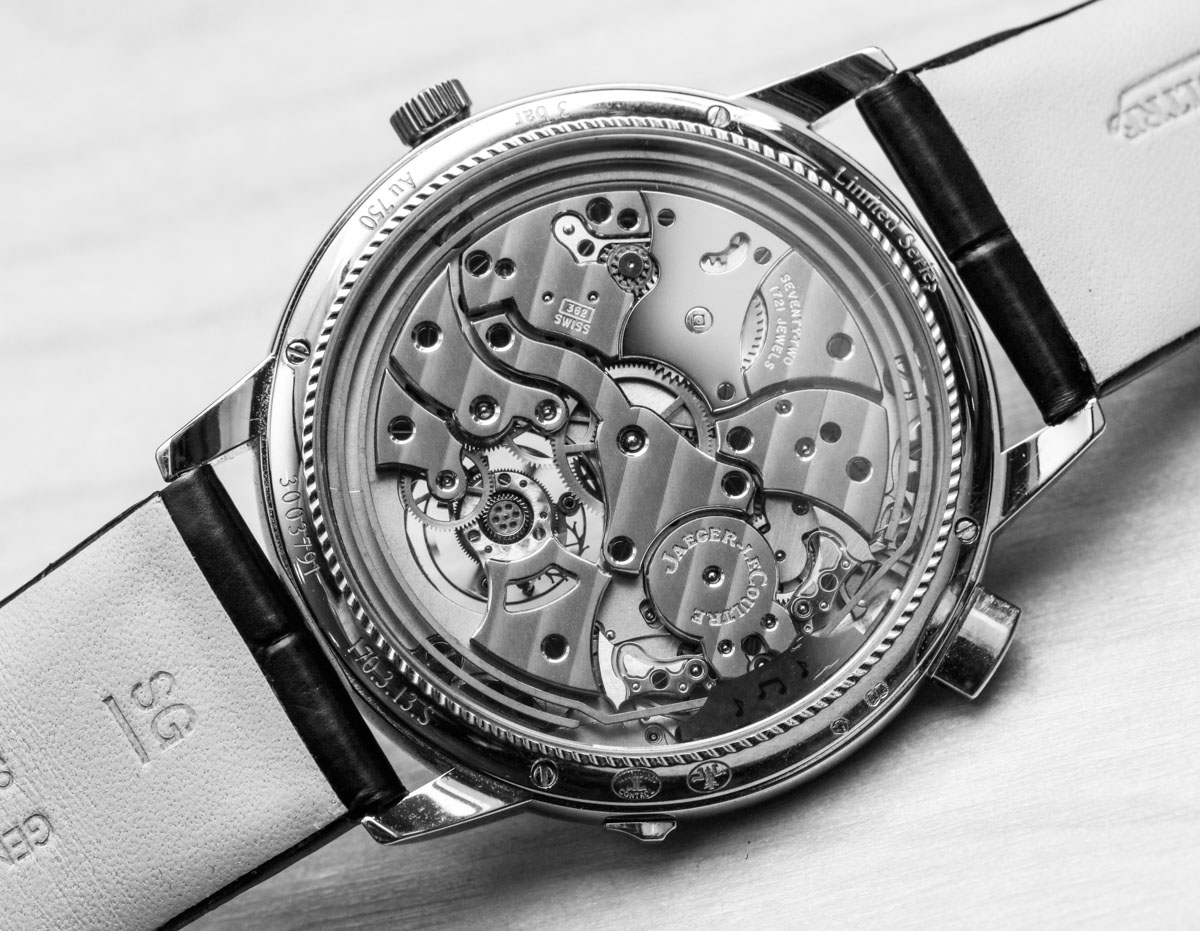 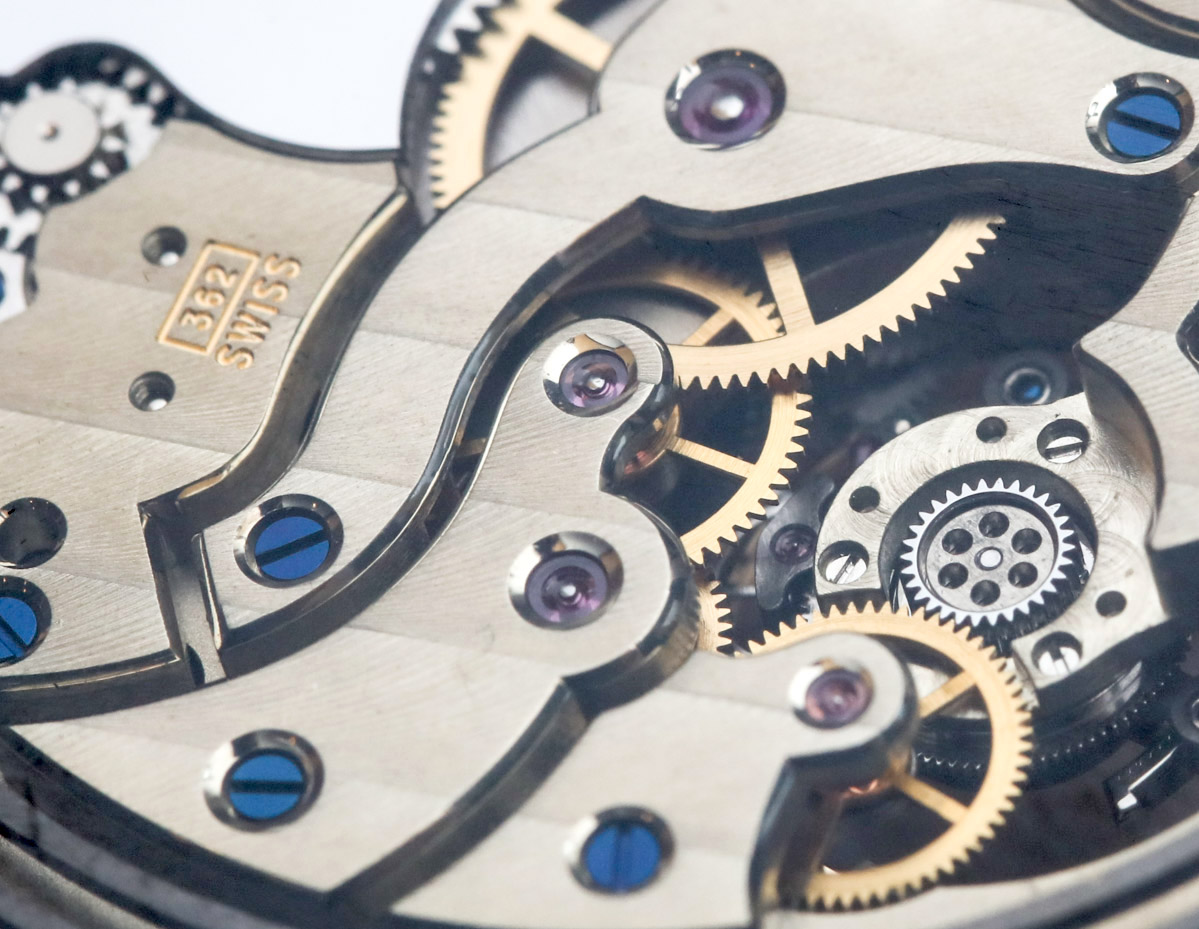 As expected, the movement side exhibits the sort of decorations usually found in a big brand’s halo exercise: beautifully curved anglage with polished edges and countersinks tease the eye. I can’t, however, get over the lack of beveled edges on the wheels on a $400,000 watch. Hand-beveled spokes should be as elemental a part of decorations as are anglage and blued screws – the independents shouldn’t be given this edge if the “Grande Maisons” want to stay on top of their game. I’m sure they too have (or could have) the talent in-house. 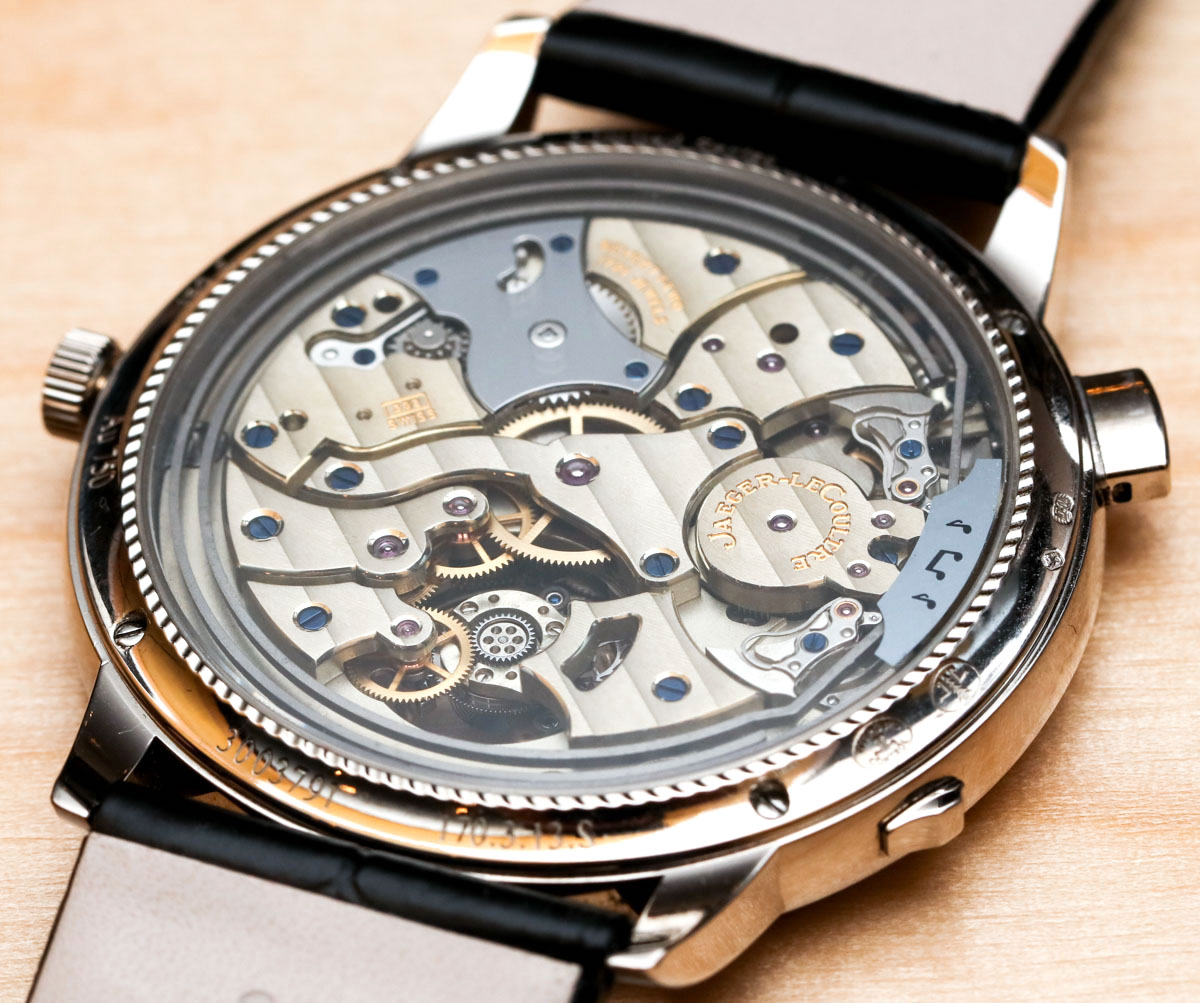 Nevertheless, the movement layout is another aspect where Jaeger-LeCoultre showcases its experience in design: although it is a rather arbitrary coming together of bridges and cocks, it nevertheless is an impressive balancing act between traditional and modern shapes. A neat treat is to see the tiny wheel that drives the tourbillon at the lower end of the movement. To witness the drive coming from the two barrels through the going train all the way to the tourbillon is just a heart-warming sight for any watch lover. 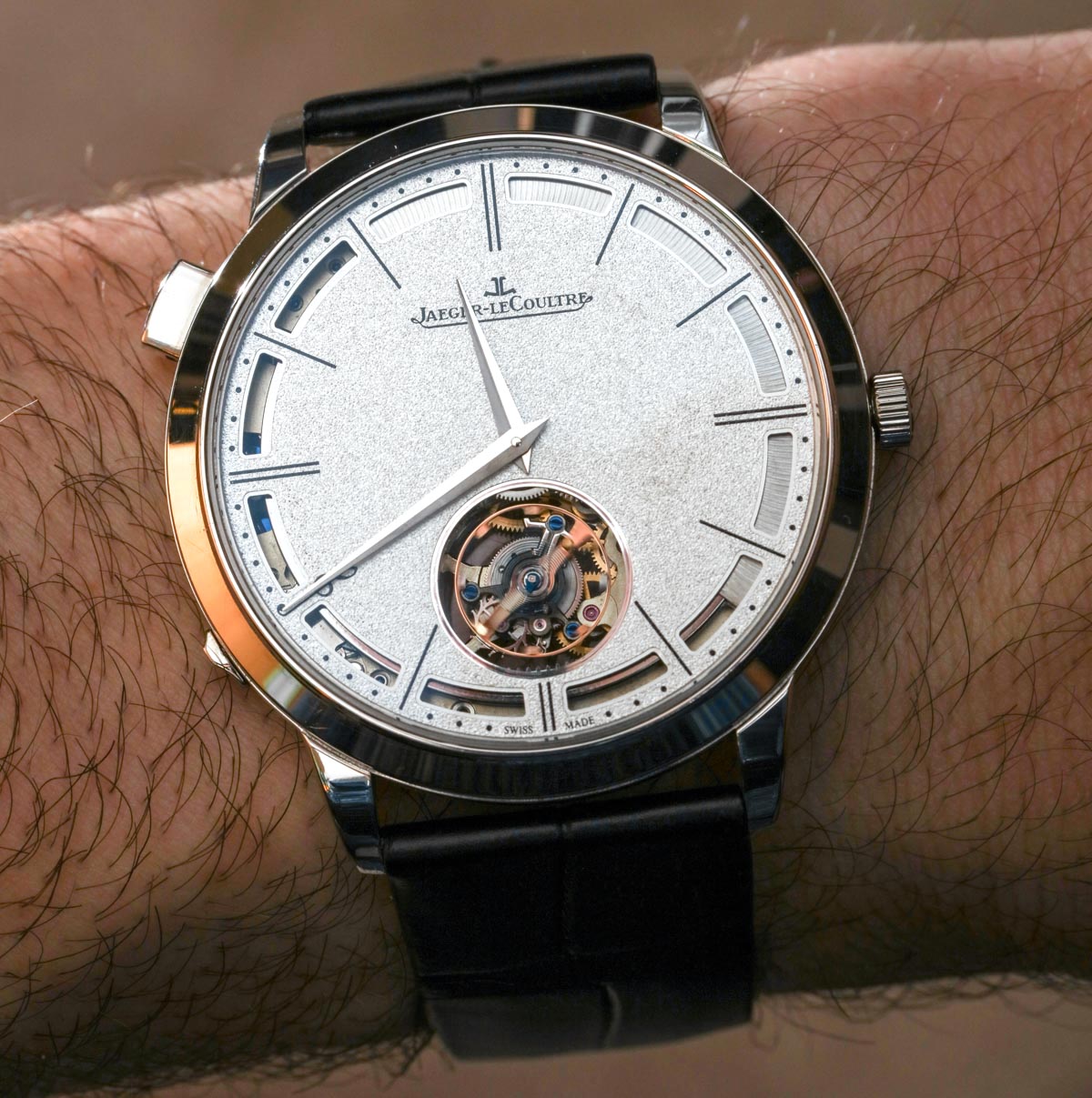 In summary, the 11th chapter in the Hybris Mechanica collection marks yet another impressive technical achievement by the “Grande Maison,” but it too carries a few weird, though not at all uncommon properties such as a stratospheric price, a relatively stratospheric limited edition number at 75 made, and some strange, although I’m sure well-considered “oversights” in finishing – mainly on the wheels. Yes, I know and I’ll admit, it is true that we’ve been spoiled by indies when it comes to next level movement decorations. I blame Grönefeld, Hajime Asaoka, and Bexei for that… I just can’t help but think that JLC could one-up everyone there if they really wanted to.