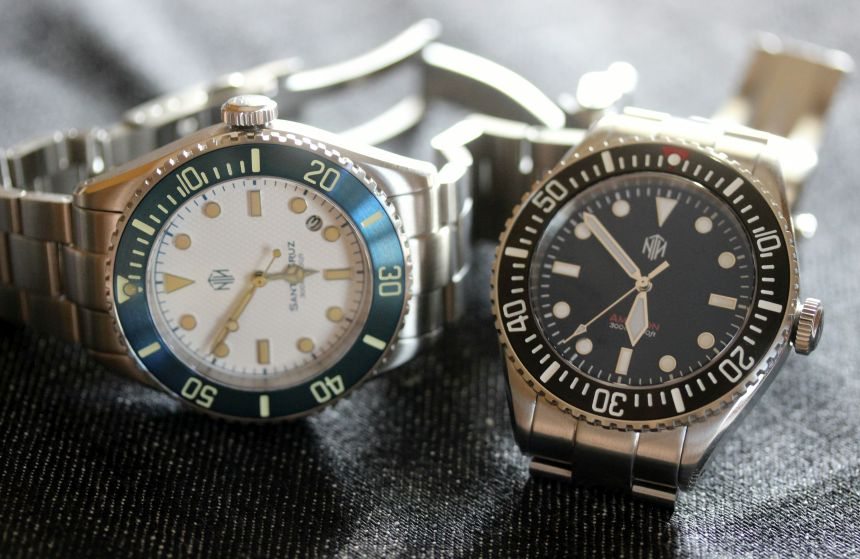 NTH? Janis Trading? Who, or what, is that? If you were not aware, Janis Trading is actually a brand you are probably already familiar with – they were formerly known as as Lew & Huey. Now, that is a name that should be familiar to most of you (and if it isn’t, check out our interview with brand creator Chris Vail). As part of the rebranding, the Janis Trading NTH Subs are a completely new line that will hit the streets soon, and we recently got to spend some quality time with a pair from the new lineup, which we first brought you word of back in the spring. 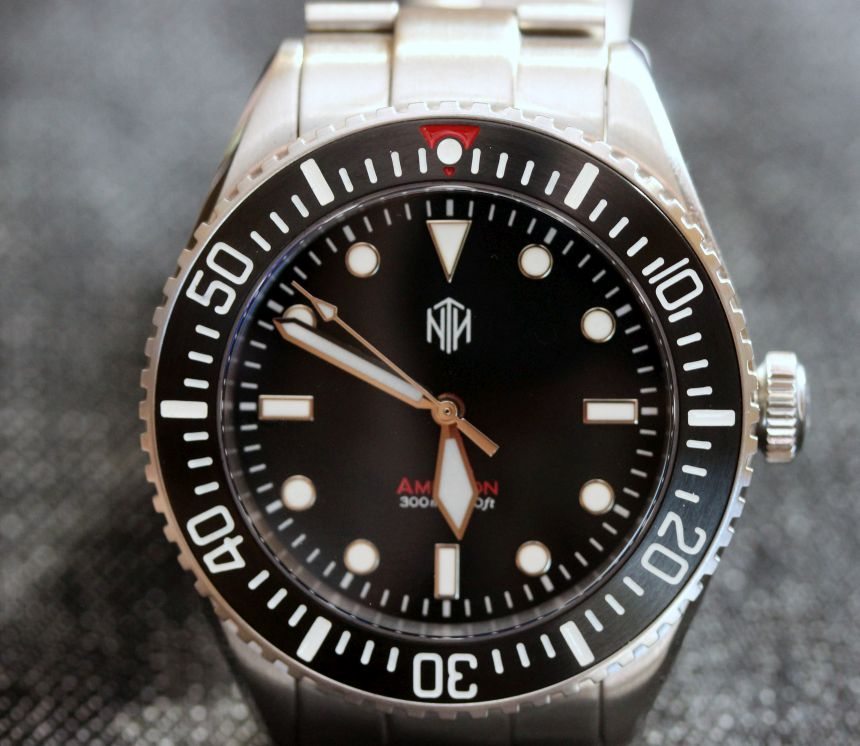 Now, anyone taking a look at the NTH Sub lineup is instantly going to see the obvious cues to watches of the past. What you might not be as aware of is that these are not simply taking inspiration from the Rolex watches of the past. Instead, these draw from the original military specs that brought us watches like the Rolex Submariner, and the Omega models that preceded the crowned brand in the military contracts. In other words, these are a mix of different styles, bringing things together in different ways. And, of course, Vail being Vail, he had to tweak the designs a bit, all while bringing the high-quality materials to the table at his affordable price points. 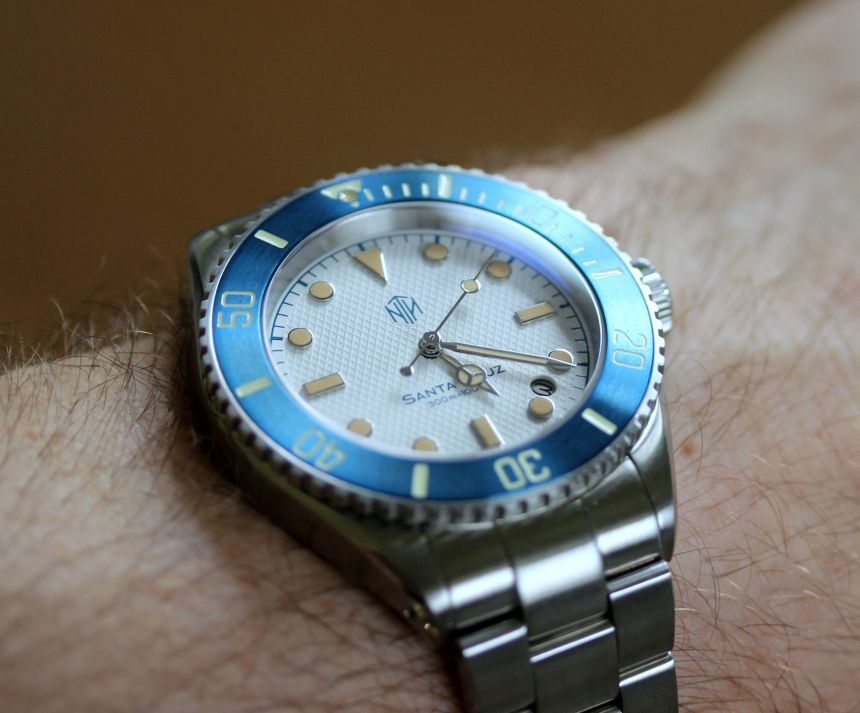 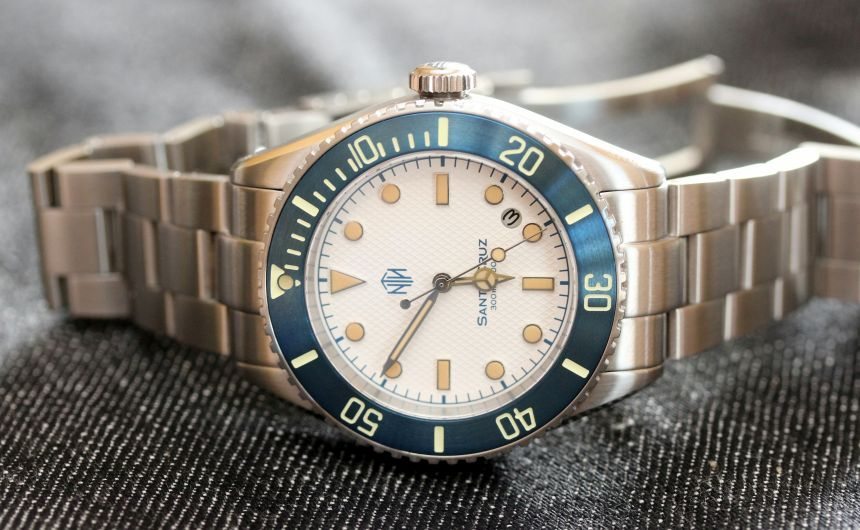 The first of the two NTH Subs that I had hitting my wrist was the Santa Cruz. This is the most recognizable design of the two, with the Mercedes handset, and of course those index shapes. Actually, those indices are a perfect place to start to showcase how Vail upped the game with these watches. Rather than going with some sort of simple printing, or even layers of paint, these are very raised applied indices. Then, on top of those hunks of metal, you have some lume that has a color to give it an aged look. I would not go so far as to call it tropic, as it is set off (in our review loaner) against a crisp white dial. 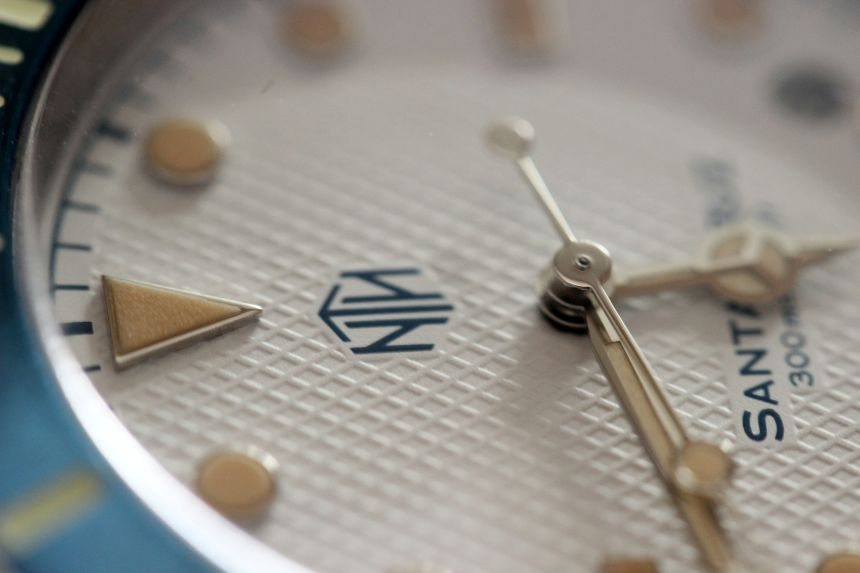 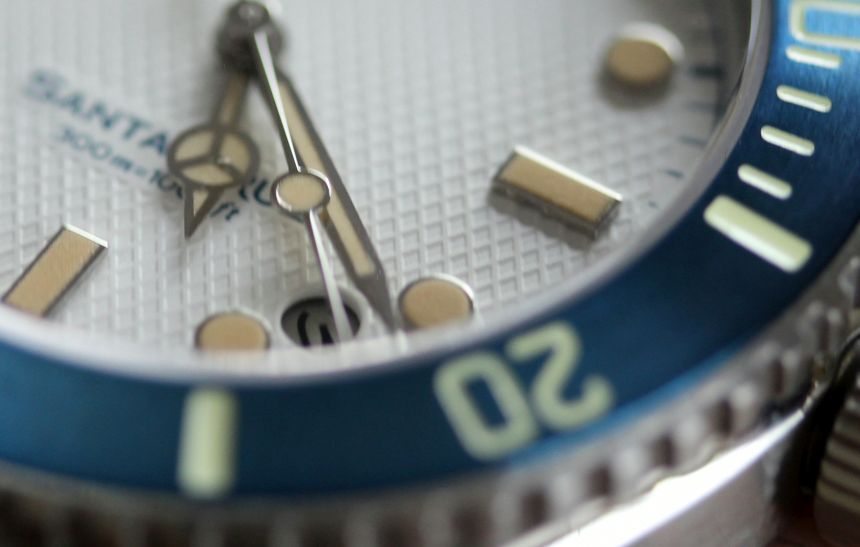 The dial of the NTH Sub Santa Cruz is not some boring, flat insert either. No, instead, there is a cross-hatch weave on the dial. For me, this calls to mind a higher-quality dress shirt that initially appears smooth, and only on closer inspection do you pick up the color-on-color pattern. In short, I found a lot to like about the dial on the Santa Cruz, though I could have perhaps done without the model name showing up on the dial (the rest of the text was A-OK in my book). Fortunately, the “aged” lume did not impact glow performance either (more on that in a bit). 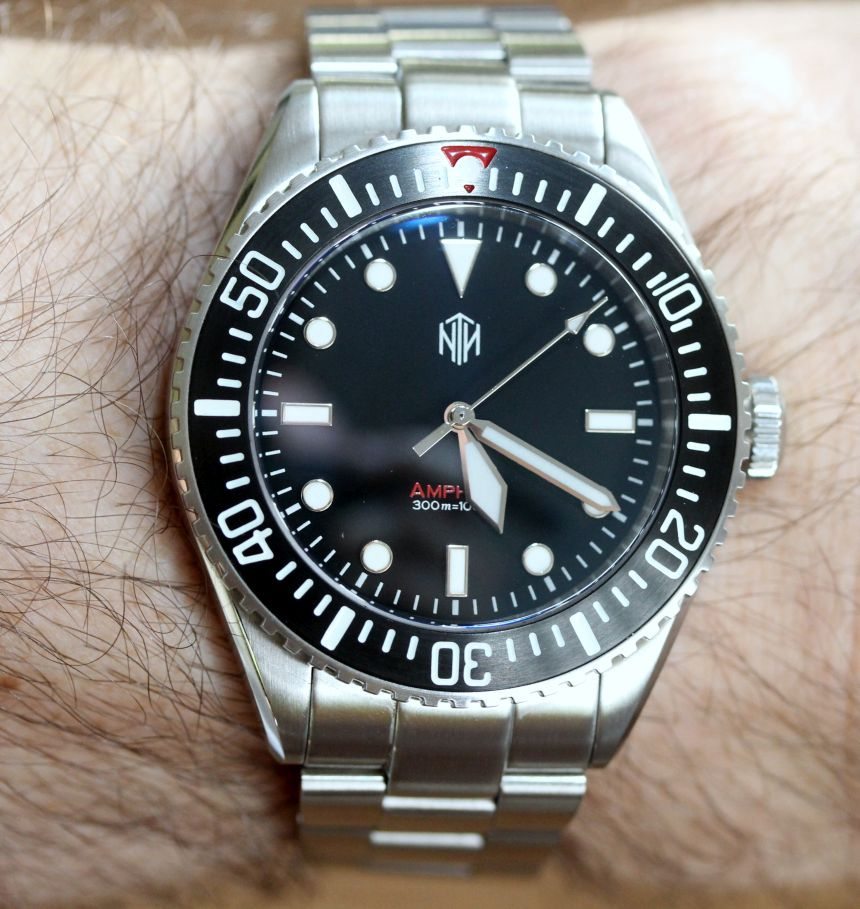 The other NTH Sub we took a at look at is known as the Amphion. Right off the bat, you can see that there are a lot of similarities to the Santa Cruz – same case and bracelet, same indices and crown, and a very similar bezel insert. Ignoring colors for the moment, the big difference here is sword-style handset. At first glance, you might think that this is copying a Seiko mod. As it turns out, all of those Seiko mods that go this route are pointed back to that mil-spec design, so we’re still in good company here. I would be remiss if I did not call out the similarities to the Raven Vintage, another watch of this style that I have been a big fan of.

Getting back to the Amphion, this is the classic “red triangle” style, no-date look. While the Santa Cruz definitely has more of a styled touch to it (with the color scheme), here, on the Amphion, you are headed for more of an everyday, no-nonsense sort of styling. In other words, while both are tool watches, I might be tempted to say that the Santa Cruz is more style-oriented, while the Amphion with the lack of a date display and it’s crisp white-on-black color scheme hews the closest to the tool watch ethos. 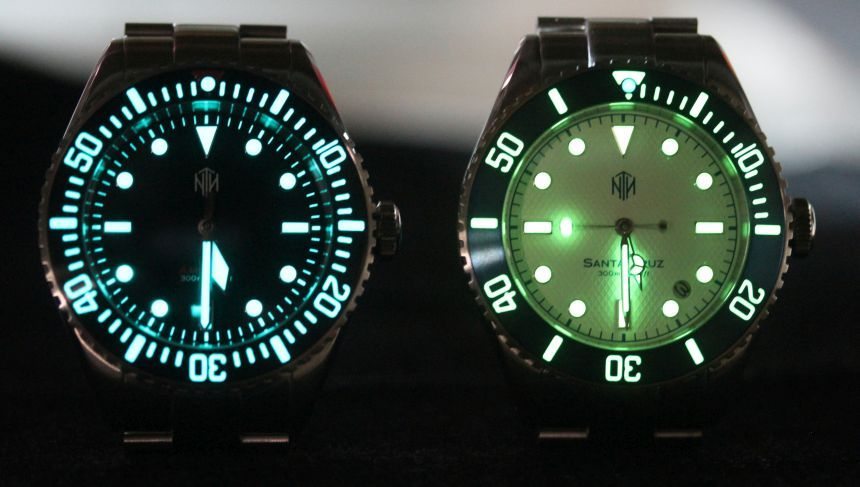 Regardless of which of the NTH Subs you go with, you will be picking up the excellent build quality that Vail has come to be known for. You will also be getting some pretty awesome lume. While the Amphion is all in blue (including the bezel insert), the Santa Cruz instead goes with green, and mixes in a blue lume pip on the bezel. I would not want you to miss the lumed crowns, either, as those are just plain fun. Useful? Not by a long shot, but they are a treat to see (and they are color matched to their dial lume colors). Tucked into the 40mm cases of the NTH Subs you will find a Miyota 9015 movement which, while nothing flashy, will certainly get the job done. 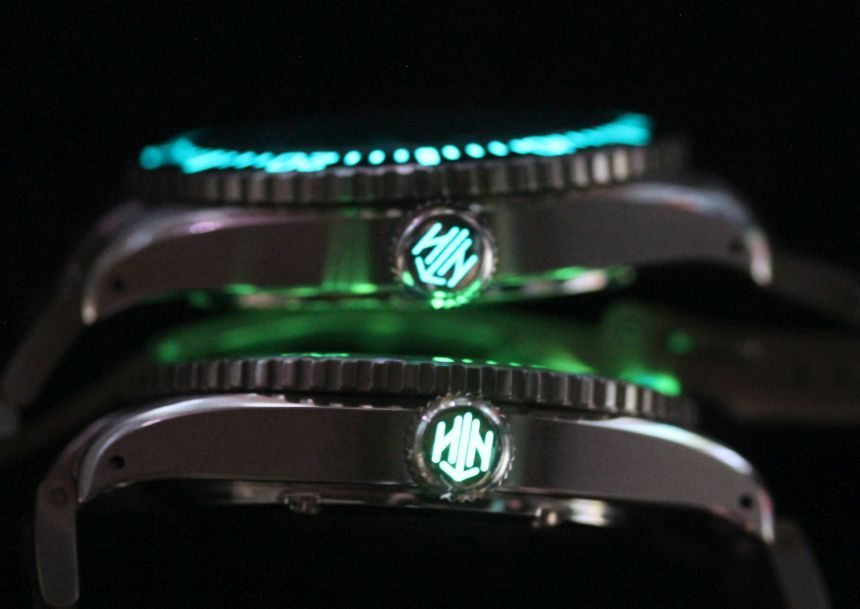 In practical cases – i.e., daily wear – I found the NTH Subs to be great companions (as my Instagram wristshot-off with Victor Marks will attest). While 140g seems like a heavy watch, it wears extremely comfortably. This is in large part due to the solid bracelet (and it now occurs to me: why not lume that logo on the clasp?) that hugs nicely to the wrist. The thinner profile also works well, as this is not a dive watch that snags on a shirt cuff, even though it manages to carry a 300m water resistance rating. In short, the NTH Subs continue the argument for why dive watches are one of the most popular choices out of the tool watch designs. They work well, the design looks sporty without being overbearing, and the construction (and water resistance) give confidence that it is a watch that can survive daily life. 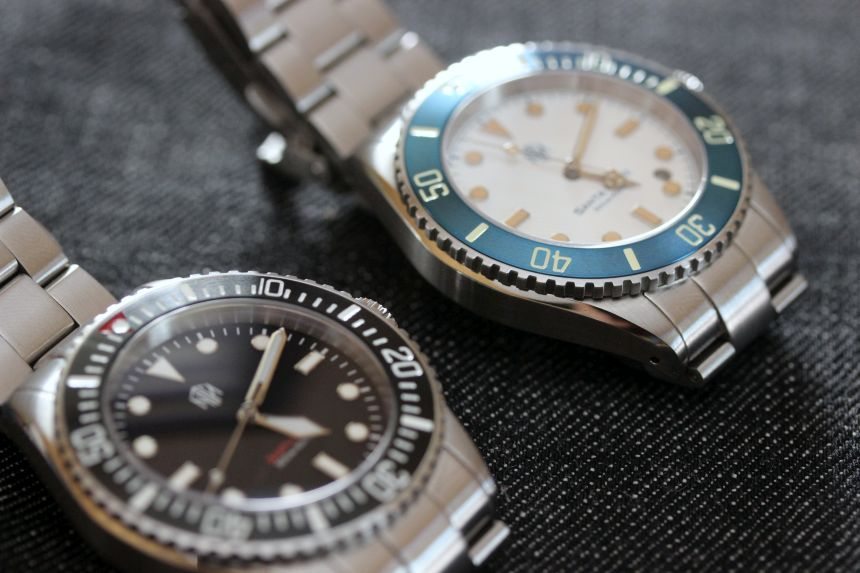 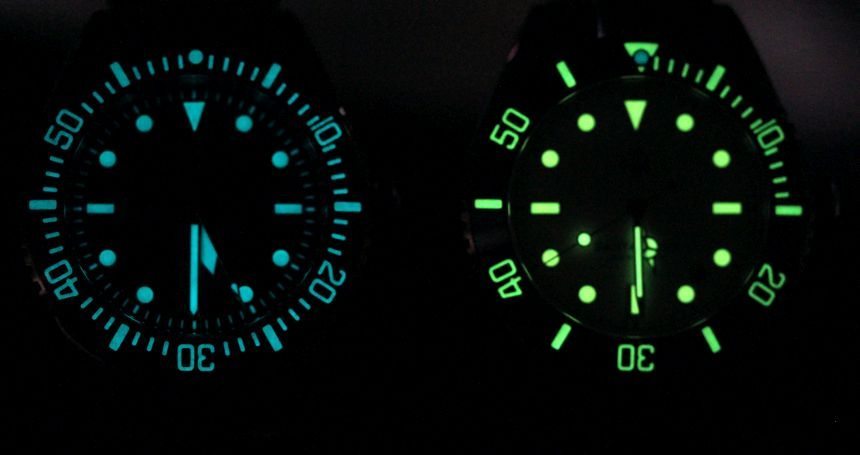 With a grand total of eight different variants being made of the four NTH Sub models, you certainly have no shortage of choice. If I were choosing amongst them all, I would most likely go, myself, for the blue-dialed Nacken. Of the two that I had in, it is almost a coin-toss. I dug the coloration of the Santa Cruz, but I came to realize the Mercedes handset is not my favorite. The flip side of our review coin has the Amphion, and this is just a great-looking watch for everyday – even if some might confuse it for a Seiko mod with the handset.