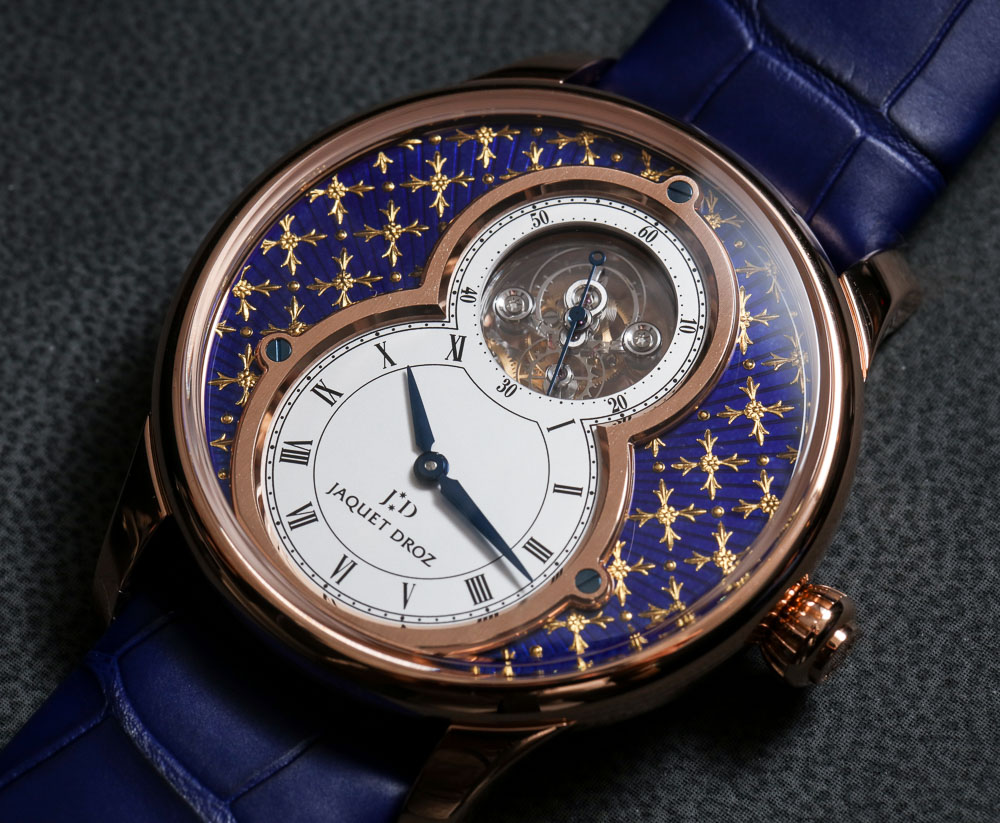 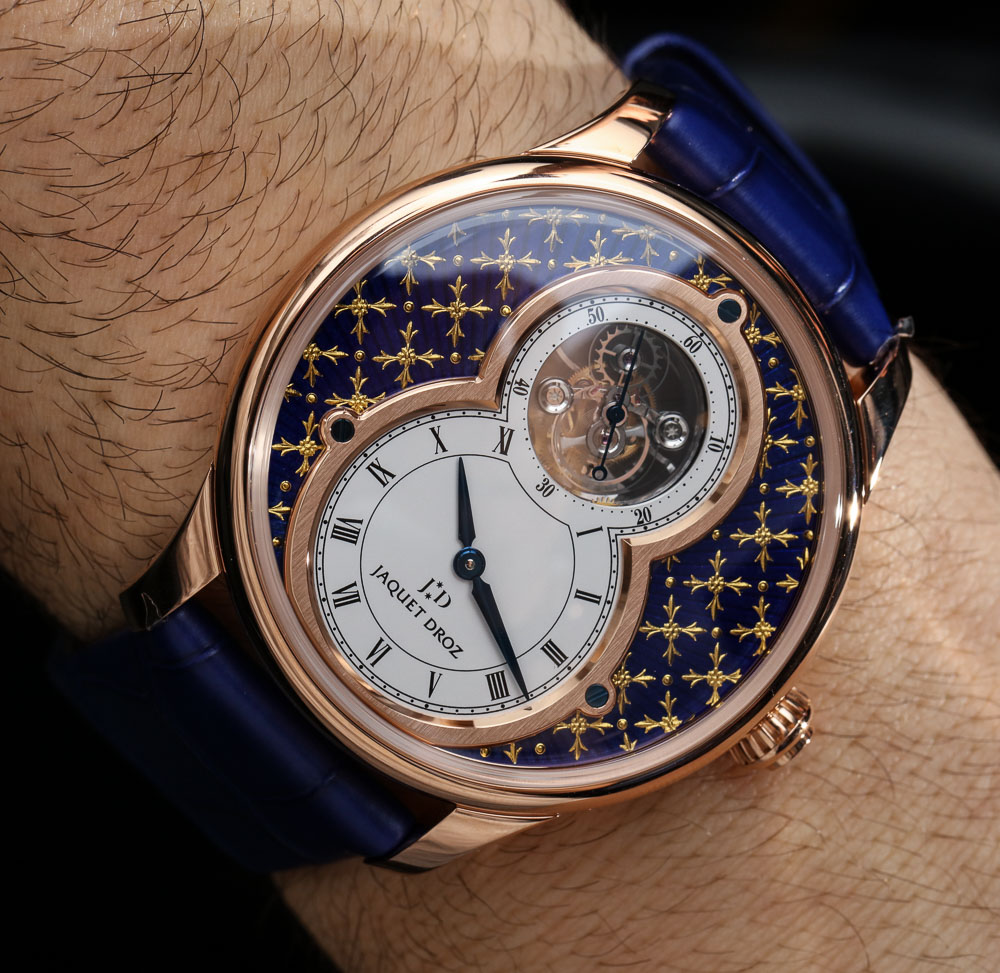 What is important to mention is that over the last several years Jaquet Droz has invested rather heavily in not only bringing many of these artistic decorative techniques in-house (as opposed to using outside artists and craftspeople), but also in rediscovering lost techniques which were used in the past to create much of the beautiful enamel work on pocket watches and other items from a few hundred years ago. 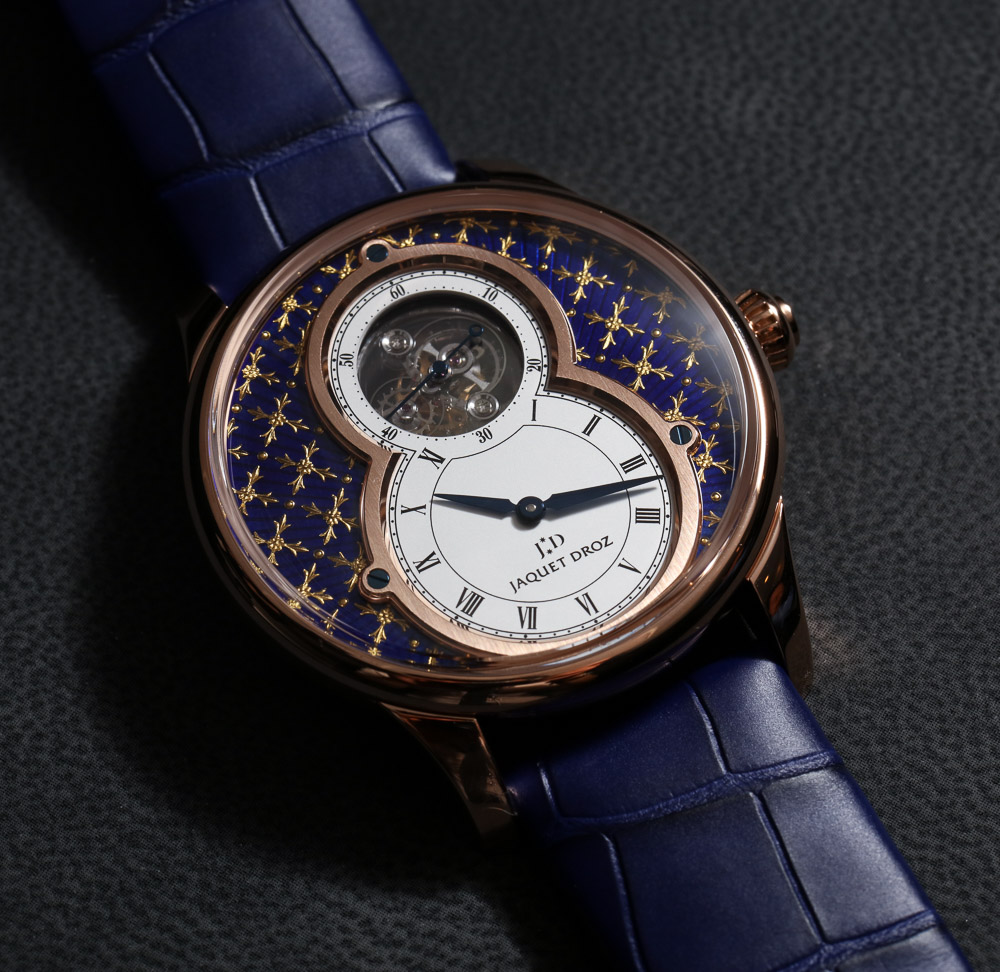 It isn’t the case that someone can simply look at an antique pocket watch and immediately know how it was made. So much technique has been lost over the ages – even in those instances when the tools and even technical drawings are available. It might be the epitome of a first-world problem (or “Swiss dilemma,” as I call it), but there are people in the watch and luxury industry in general who dedicate much of their time and careers to learning how people made things in the past. 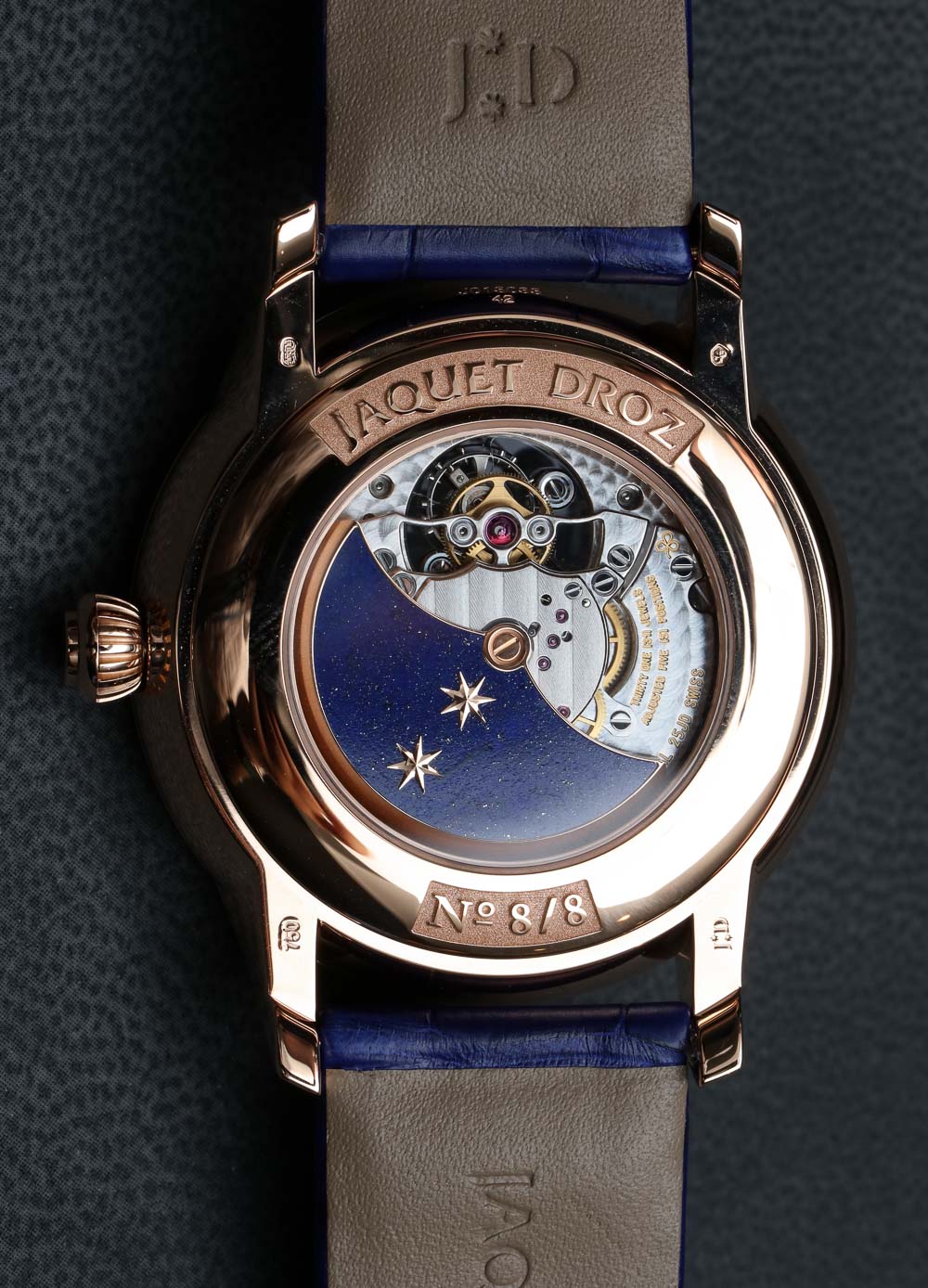 This search for lost techniques and processes to create art really began in the world of restoration. People needed to restore old art to look newer again, and in many instances there simply aren’t a lot of clues to go by. Autodidacts of the most brilliant caliber have been able to reinvent some amazing things. In the watch industry, where “old” is often the new “new,” the spirit of rediscovering the past is a deep part of the culture of many brands. Perhaps especially at companies like Jaquet Droz whose namesake died a few hundred years ago. 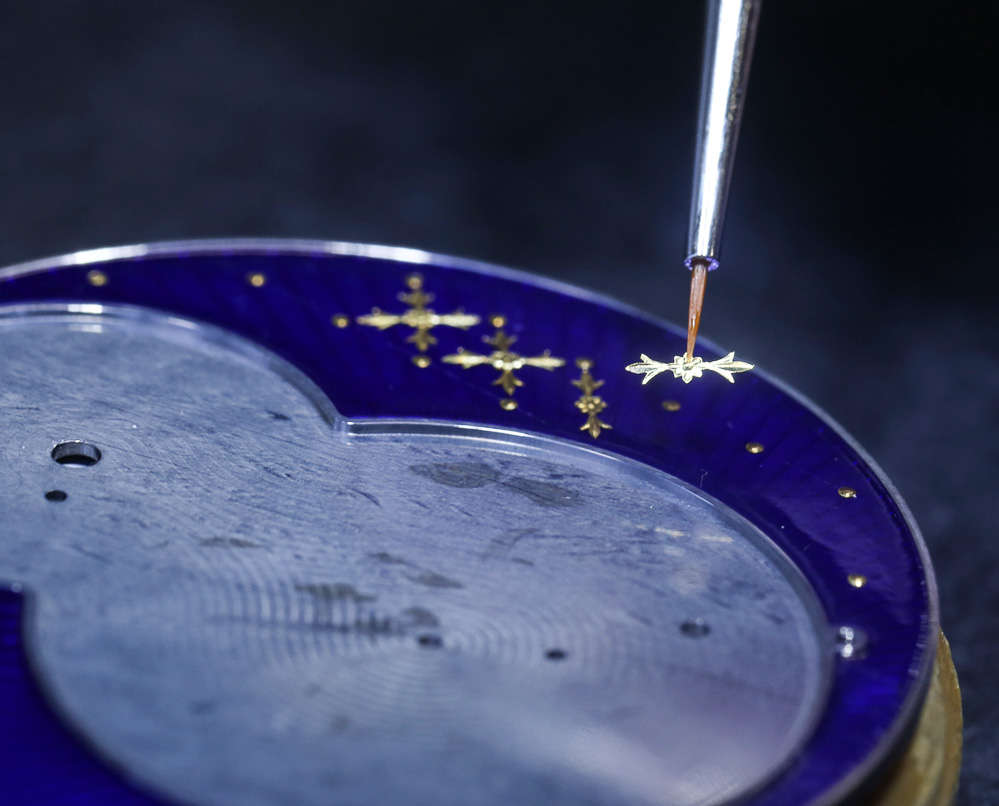 Going back to the watch, the face that frames the figure eight-style dials is decorated with what they call a paillonnée enameling technique. Here we have a surface that is textured, painted, and then set with a series of solid gold “paillons” that together create an attractive geometric pattern. These small gold appliques are currently produced in-house by Jaquet Droz, as no one else apparently has the skills to make them any more. In all likelihood, traditional ones from the past were produced using a casting technique. Jaquet Droz even admits that some of their first modern paillonnée enameling watches use original paillons from the past which they were able to recover in various ways. Eventually, they needed to produce new ones and currently do so in-house in small batches.

I’ve personally visited Jaquet Droz’s small, albeit impressive “artistic technique” studio which looks like a combination between a research and development lab and an art restoration studio. Techniques and styles are tested to see about the best way of recreating this and other lost art which we can enjoy in new watches. It’s a lot of little details, but something worth knowing about when considering a watch priced at over $100,000. That is a lot of money, but there are certainly worse ways to spend it on a luxury timepiece. 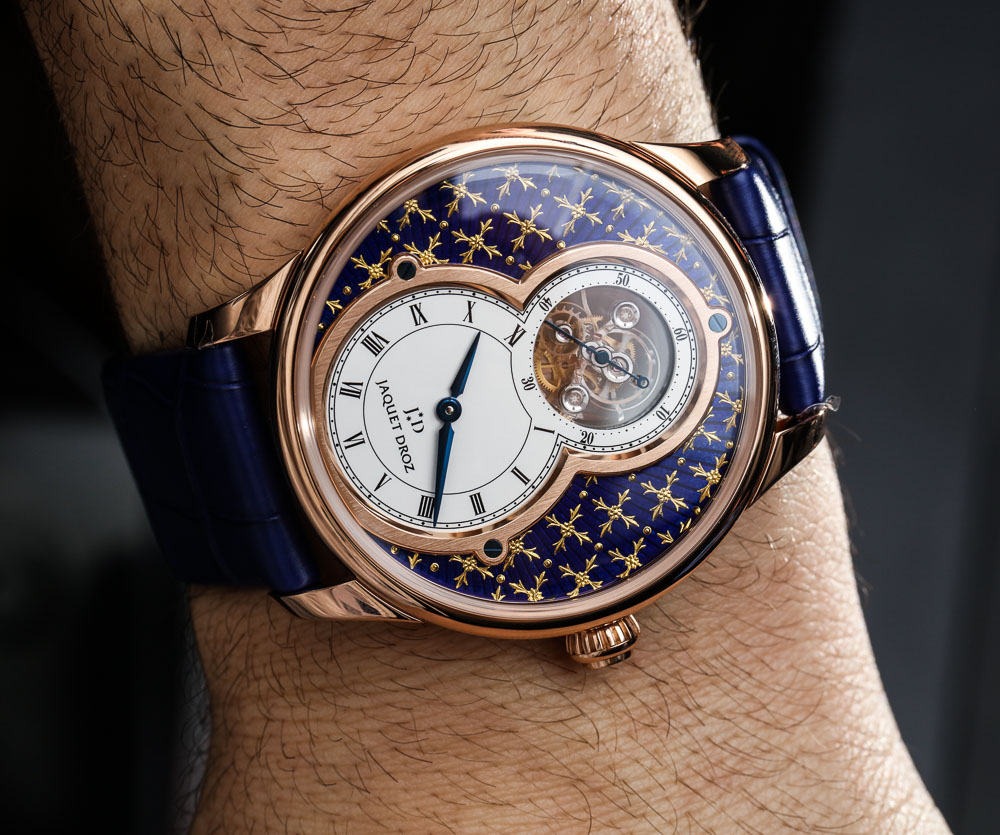 The paillonnée enamel technique with is gold paillons set against blue enamel frames the figure eight display for the time which marks the Jaquet Droz Grande Seconde collection. It’s proven to be quite attractive and is a hallmark of the modern Jaquet Droz brand since its reintroduction in the year 2000. Of course, the irony here (as I’ve mention in the past) is that the seconds indicator (which is also the tourbillon display) is smaller than the hour and minute dial so it is not technically a “grand seconds.” That name applies more accurately to the non-tourbillon versions of this design where the seconds indicator is below (and larger), and the top of the figure eight is the dial for the hour and minutes (which is smaller). 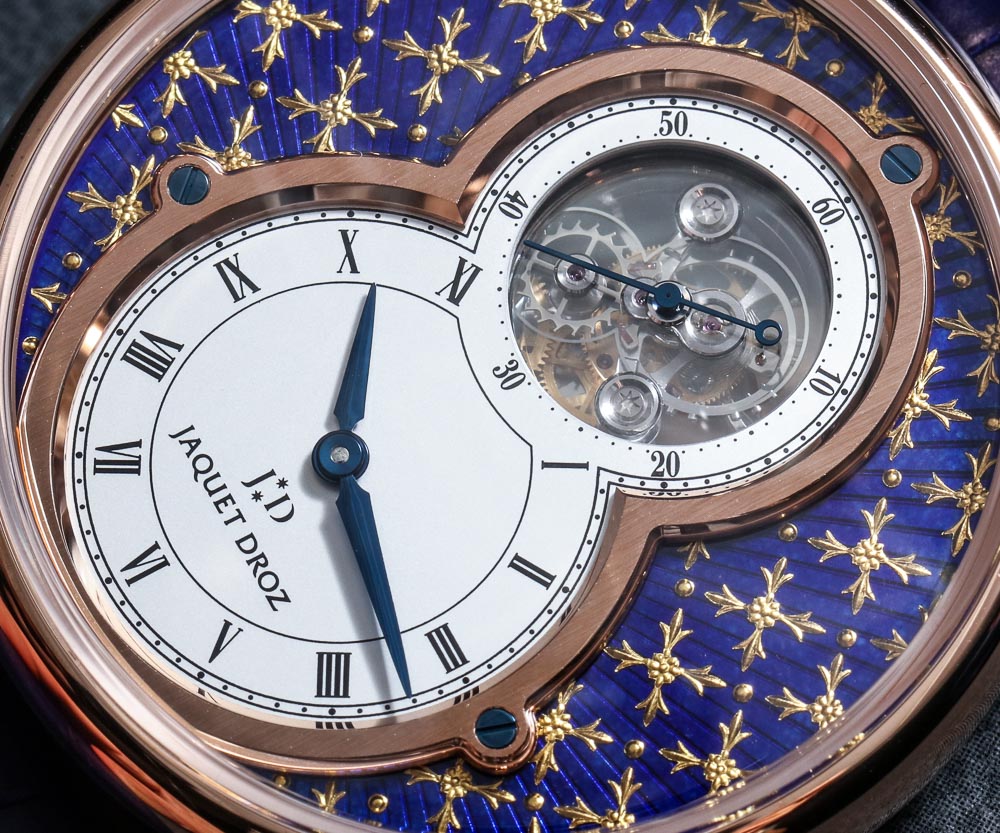 The dials are framed by an 18k red gold figure eight, which matches the 18k red gold case. The watch is intentionally bold, even though it is more dressy in its style at 43mm wide (13.1mm thick) – which, for me, is an ideal size since what you are really showing off here is the art of the dial. One of Jaquet Droz’s wonderful rolled-side alligator straps (in blue) perfectly compliments the dial color. The composition of the watch is truly top-notch (assuming the overall style appeals to you, as it does myself). 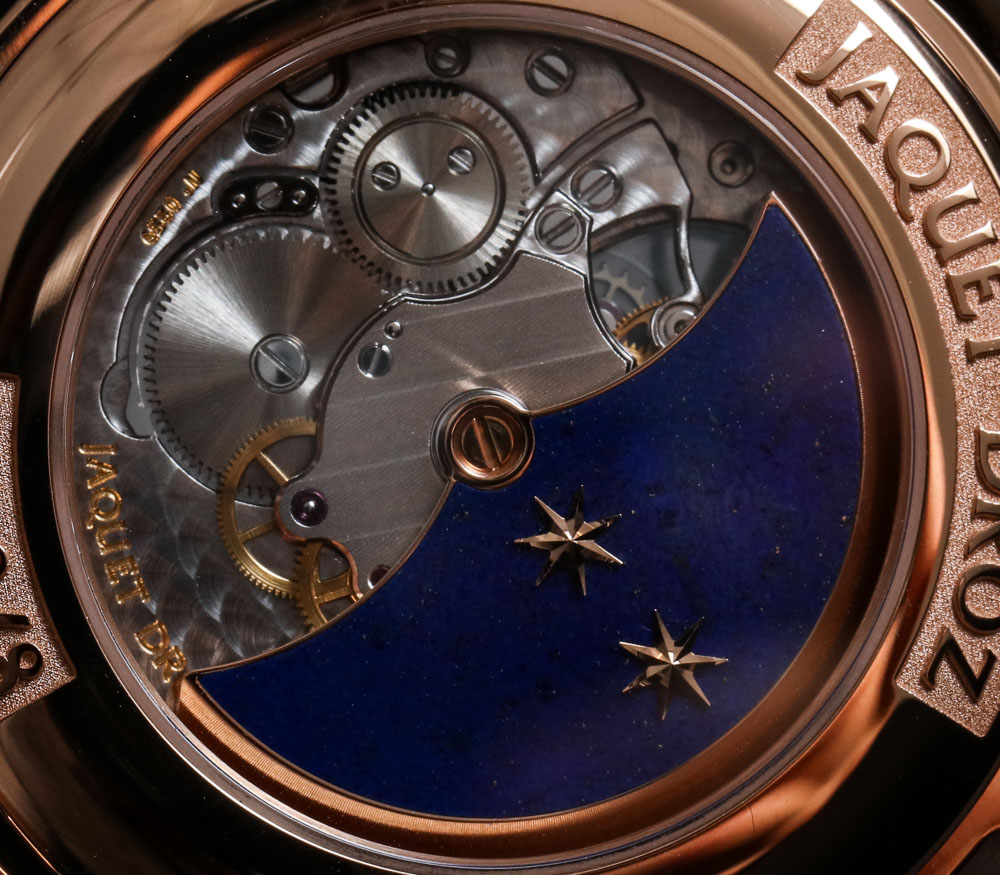 I like how Jaquet Droz chose to go for a semi-transparent window to the tourbillon. You can see it through the dial, but it isn’t brazenly exposed. It is a more subtle way of showing off a tourbillon, and I think it is a style many people will appreciate (again, despite the high cost of this status timepiece). Inside the Jaquet Droz Grande Seconde Tourbillon Paillonnée is the caliber 25JD automatic tourbillon movement, exclusive to Jaquet Droz. It has a full seven days of power reserve operating at 3Hz (21,600bph). You can see the movement through the sapphire crystal caseback window, and there you’ll also see the attractive blue lapis lazuli applique set into the otherwise 18k red gold automatic rotor. 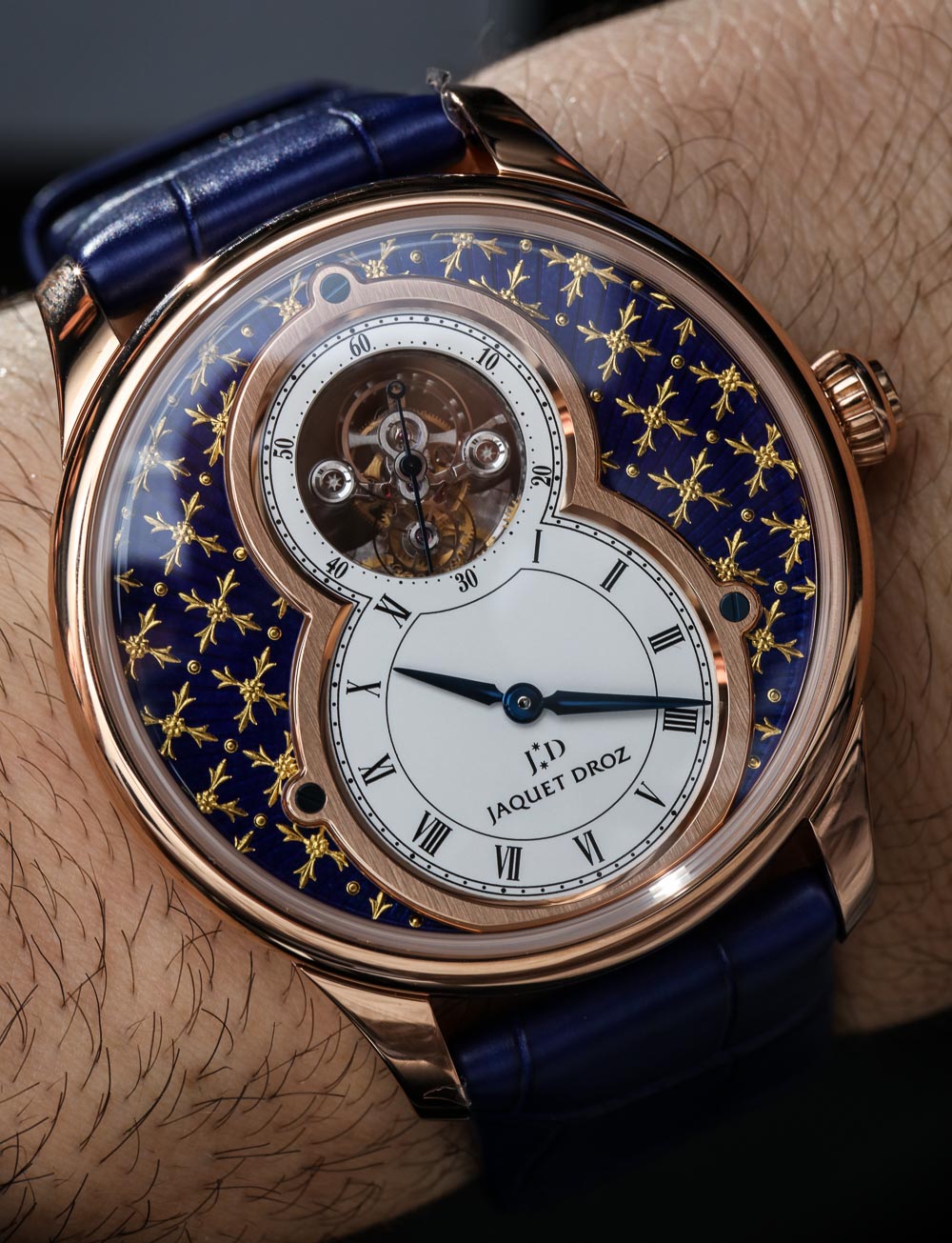 Clearly, I have a soft spot for modern watches that attempt to recreate the majestic artistic density of antique timepiece creations that I fawn over in museum settings. Brands like Jaquet Droz have a rich history to pull from, but in reality, the entire watch industry has literally several hundred years of incredible designs and artistic techniques to inspire them. Modern tastes and industrial practices prevent most of the historic hand-done art to be used on today’s watches, but it is nice to know that at least some watches like the Jaquet Droz Grande Seconde Tourbillon Paillonnée attempt to combine modern aesthetic considerations with artistic techniques that many people can continue to appreciate. I think Jaquet Droz blends the old and the new together quite well in watches like this, but they are quite limited in their production by nature. This reference J013033242 watch is produced as a limited edition of just 8 watches with a price of $119,200. jaquetdroz.com