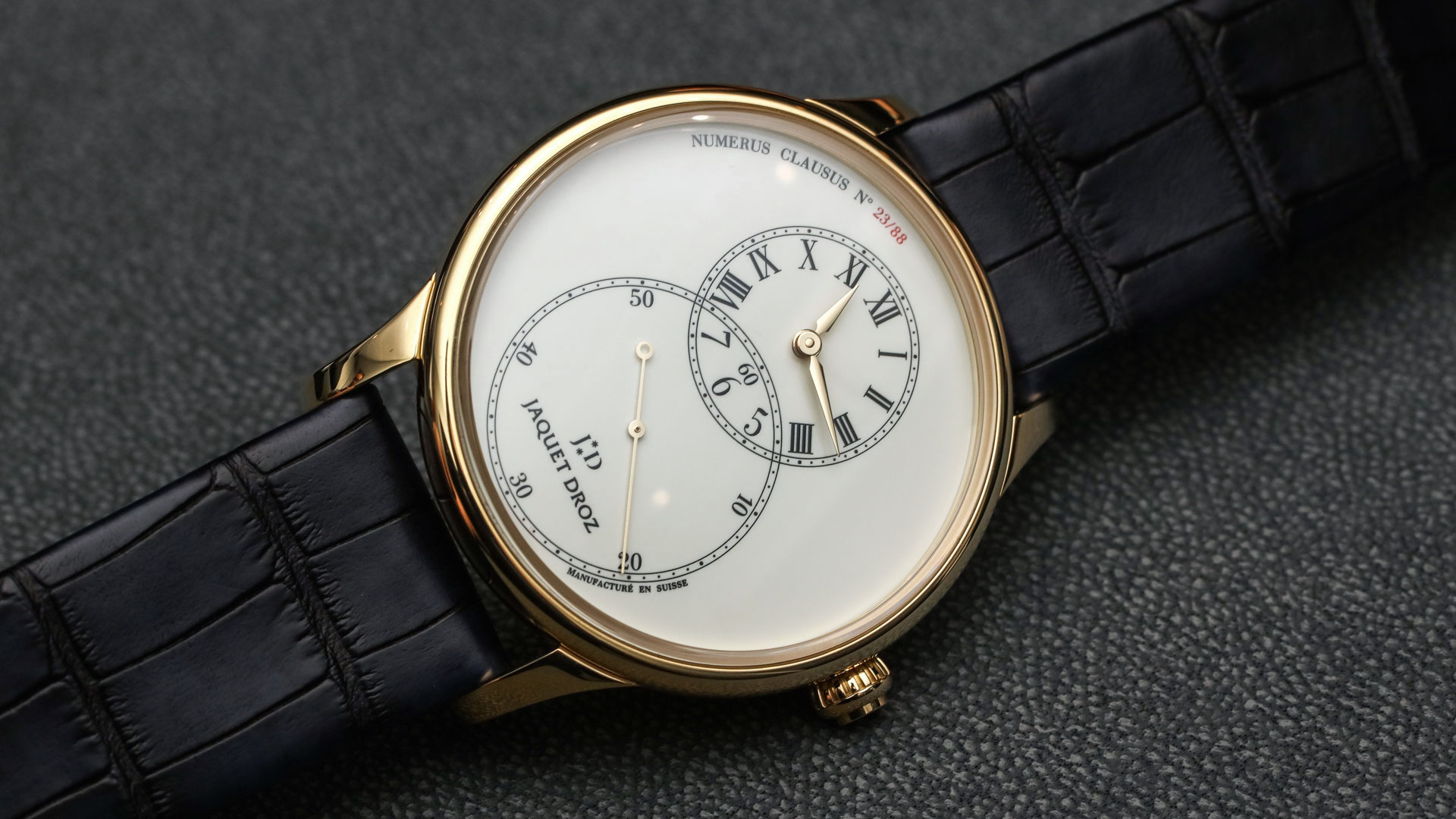 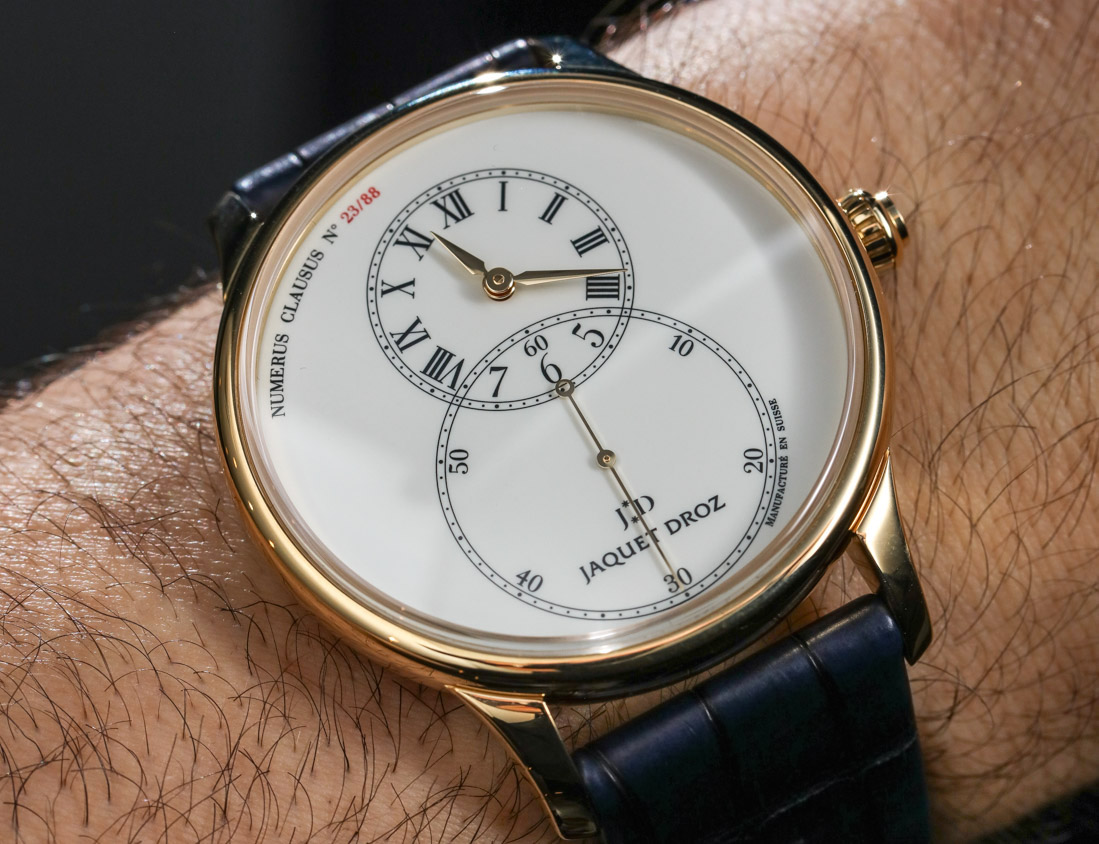 Jaquet Droz is one of the most interesting modern watchmakers around in my opinion, and this new for 2018 Jaquet Droz Grande Seconde Tribute watch in 18k yellow gold marks the first time the brand has “homaged” one of their own modern timepieces. Pierre Jaquet-Droz himself was an esteemed and celebrated watchmaker (and sales guy) from Switzerland’s golden age of watchmaking in the 18th century. His legacy lives mostly in the automatons and other incredible mechanical creations his team built in addition to timepieces, which they sold to nobility across a large region. 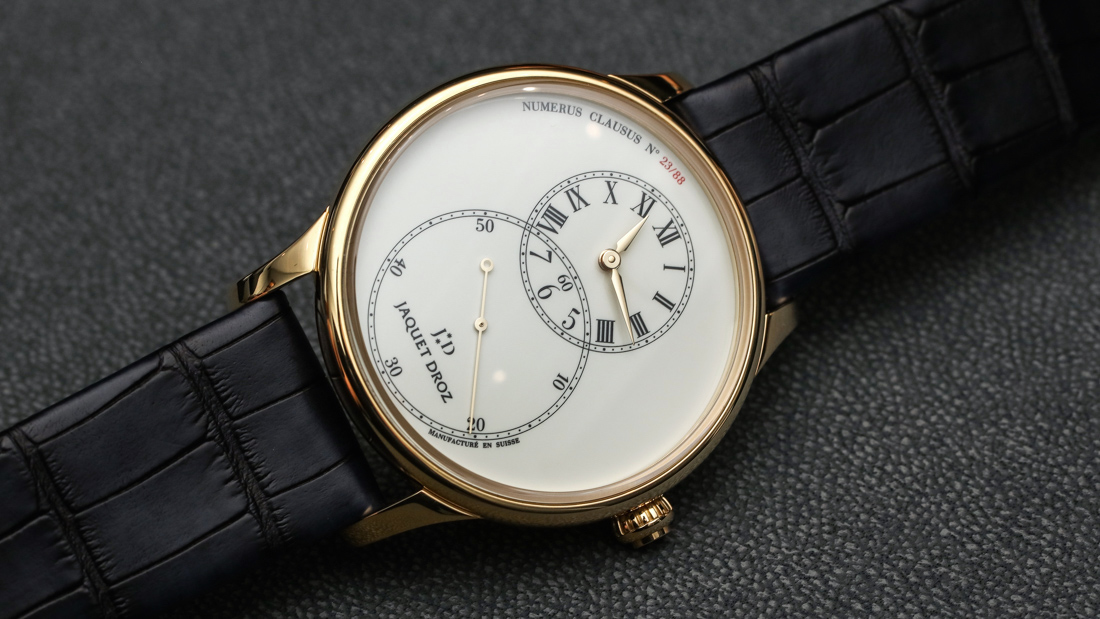 In the year 2002 Jaquet Droz returned as a name under ownership of the Swatch Group run by Manuel Emch (who later went on to run Romain Jerome for many years, until recently). Emch was probably at his best when running Jaquet Droz and the flagship model was the Grande Seconde. Emch was inspired by a Jaquet Droz pocket watch dial design which had a dial for the hours and minutes “stacked” on a larger subsidiary seconds dial. The assortment of elements made a figure 8 design. Emch both aesthetically liked this dial design and also saw an opportunity to produce a product that was particularly popular in the east (as was actually the case back in Jaquet Droz’s own day). The number “8” is at this point well-known to curry favor among some Chinese consumers, and the brand ran with it, making most of their limited edition watches limited to 8 or 88 pieces – in addition to having a figure 8 aesthetic on the dial. 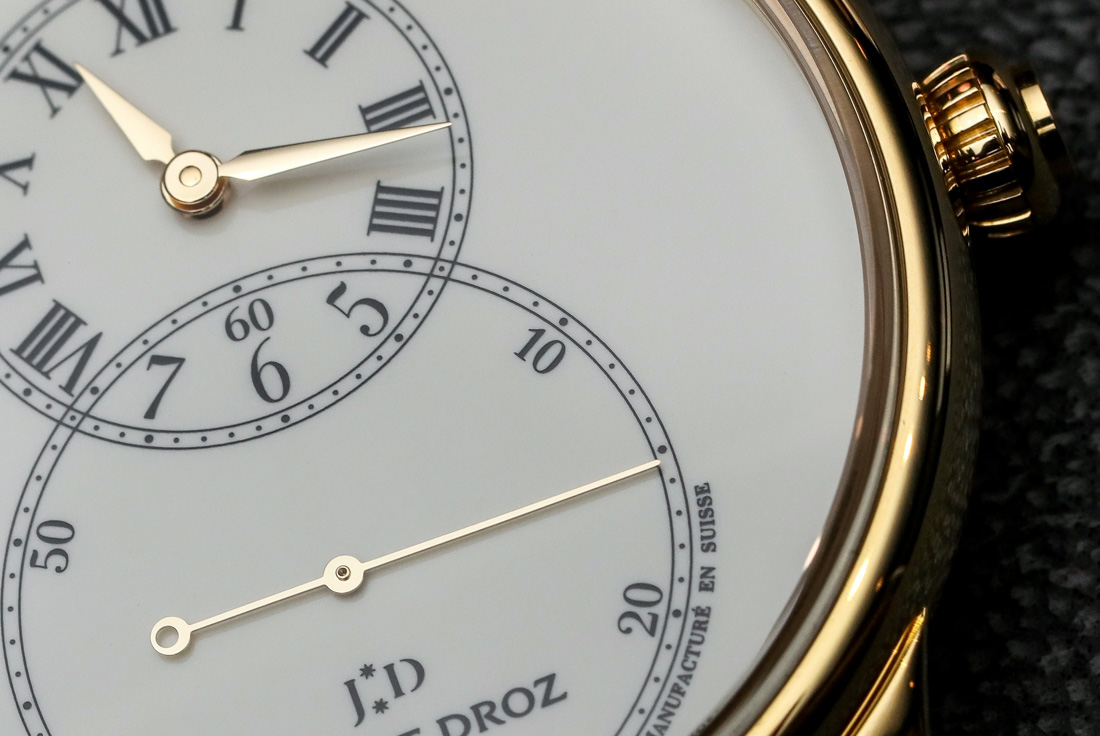 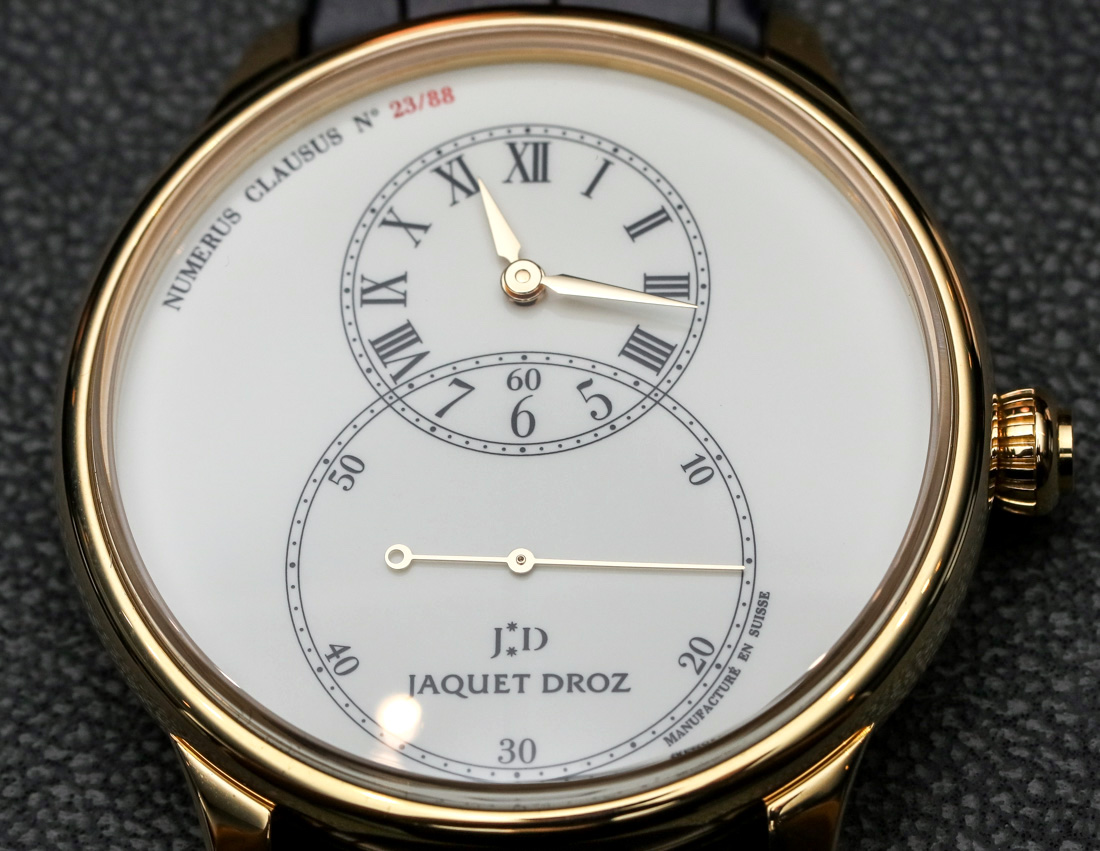 What I most appreciated about the Grande Seconde when I first discovered the watch many years ago was its ability to be traditional but also modern with its simple, minimalist style. It also boasted a large size, which in my opinion was a bit ahead of its time. I do think that Emch was a bit ahead of his time as well and after the Grande Seconde came a huge wave of minimalist design interest in watches – though mostly at much lower prices. In my opinion the Jaquet Droz Grande Seconde has done more to get a particular generation of modern design lovers into Swiss dress watches in a way that few other products have been able to do. 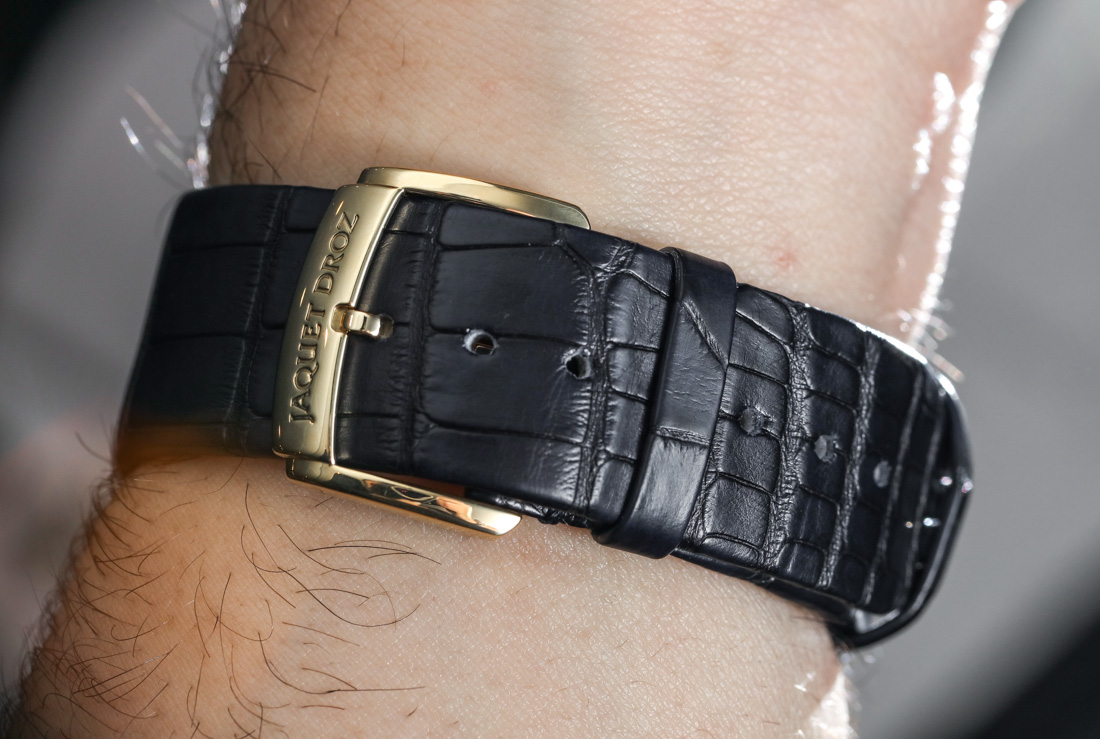 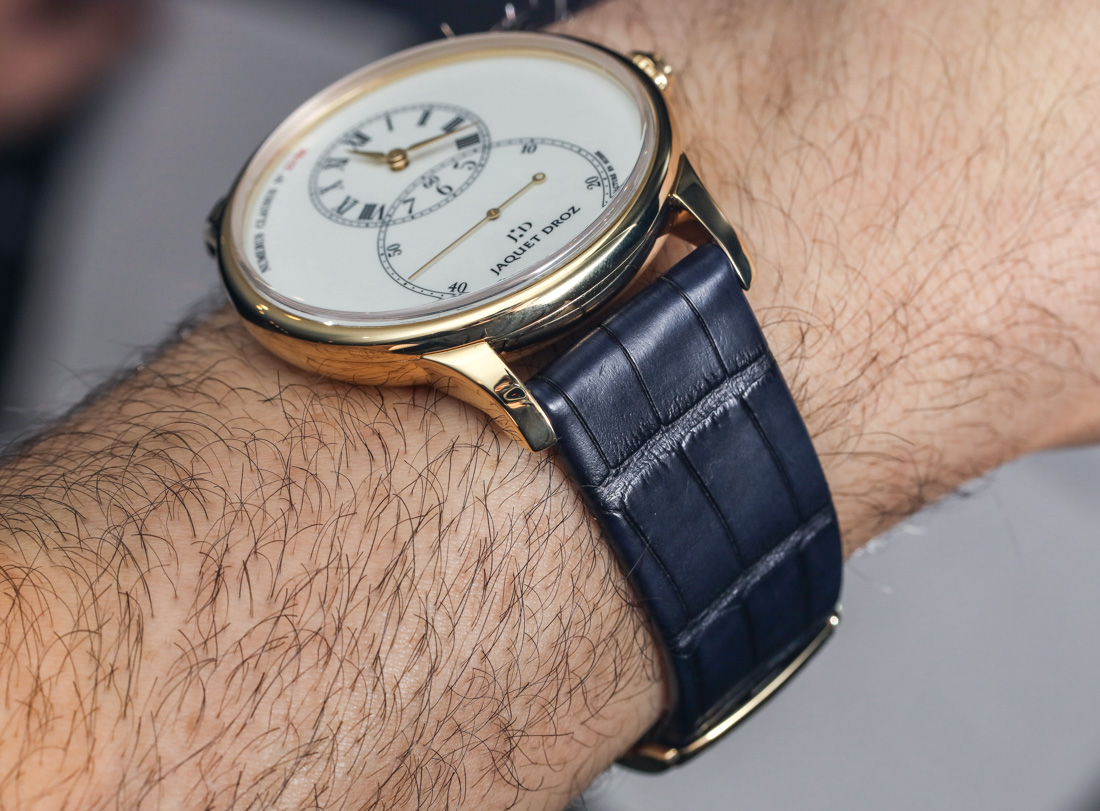 The 2018 Jaquet Droz Grande Seconde reference J003031200 is an homage to the original model but for the first time in an 18k yellow gold case. Sized at 43mm wide (11.48mm thick and water-resistant to 40m), the lovely proportions are elegant and comfortable to wear on the wrist. It isn’t a design for everyone, but it isn’t trying to be either. The dial, in my opinion, continues to look its best in white, and here it’s produced in a traditional style using baked grand feu enamel. The hands are matching 18k yellow gold making for decent legibility. The classic and timeless nature of the dial persists well and proves that the Grande Seconde design continues to last the test of time. 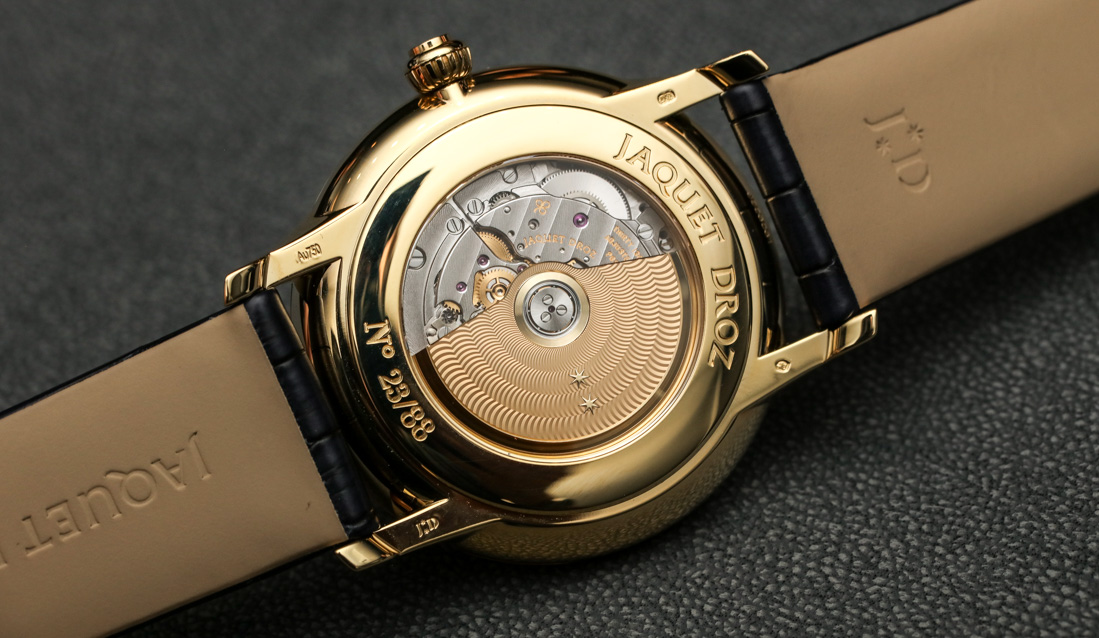 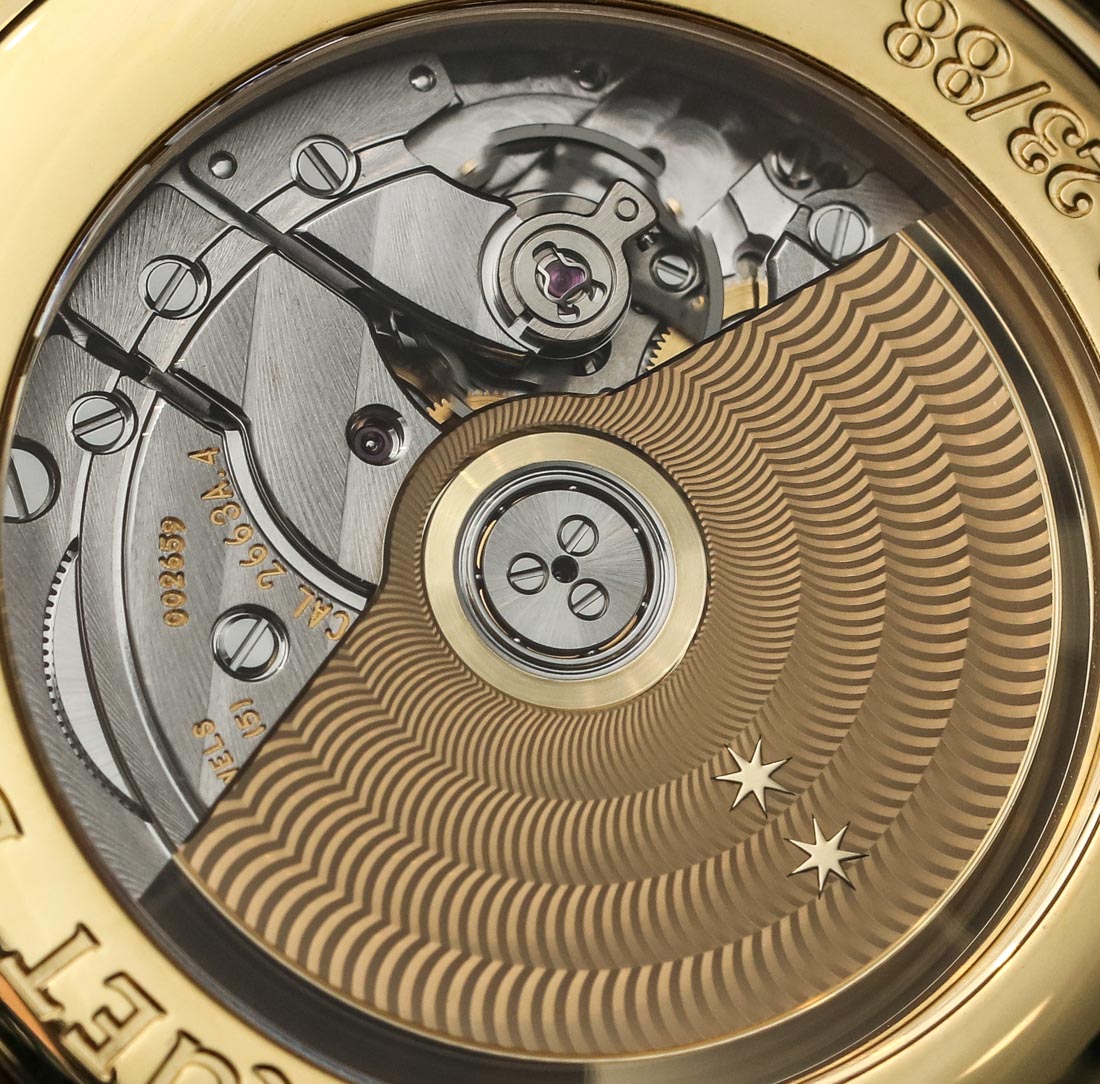 Inside the watch is a movement that was only recently included in the Grande Seconde collection – being superior to that which existed in the original models. In a true testament to using “group power” the caliber Jaquet Droz 2663.si isn’t produced in-house but is made exclusively for Jaquet Droz by partners in the Swatch Group. Being a smaller operation with access to movement exclusivity such as that is part of what makes this brand special in my opinion. The automatic movement is very nicely decorated and benefits from having silicon parts in the regulation system as well as double mainspring barrels for 68 hours of power reserve operating at 4Hz (28,800 bph). The machine engraved decorated gold rotor really helps round out the lovely display through the sapphire crystal window on the rear of the watch. 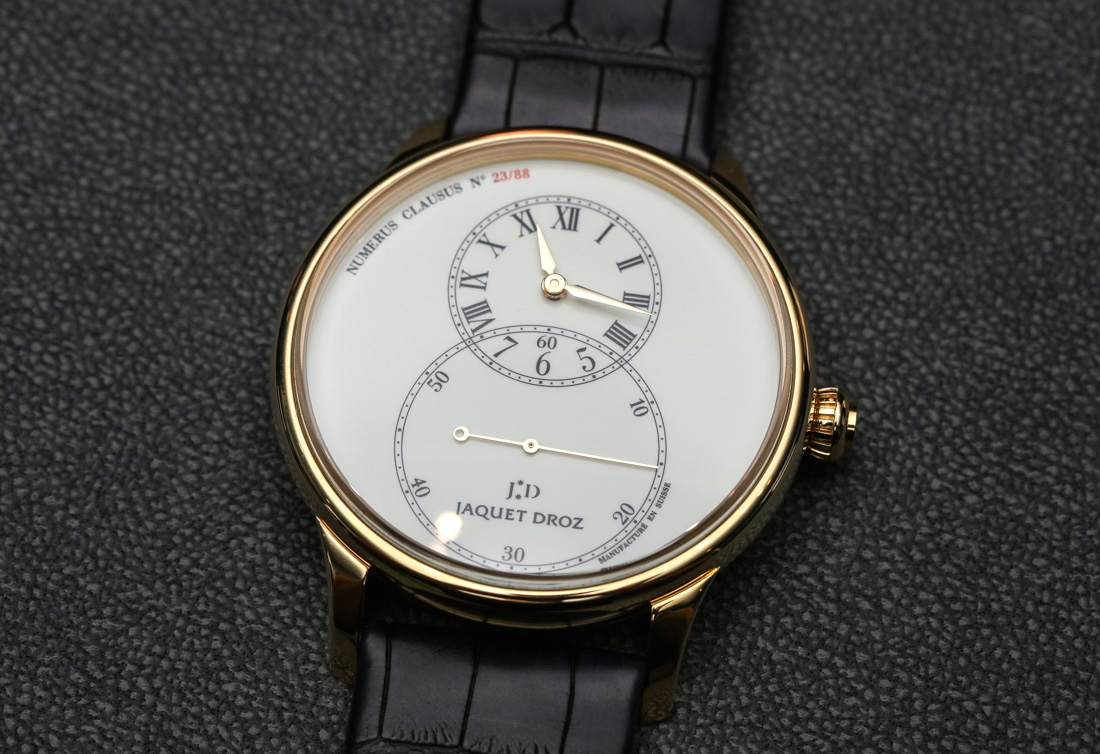 Does it at all surprise you that this 18k yellow gold Jaquet Droz Grande second Tribute J003031200 will be part of a limited edition of 88 pieces? Price is $21,400. jaquet-droz.com