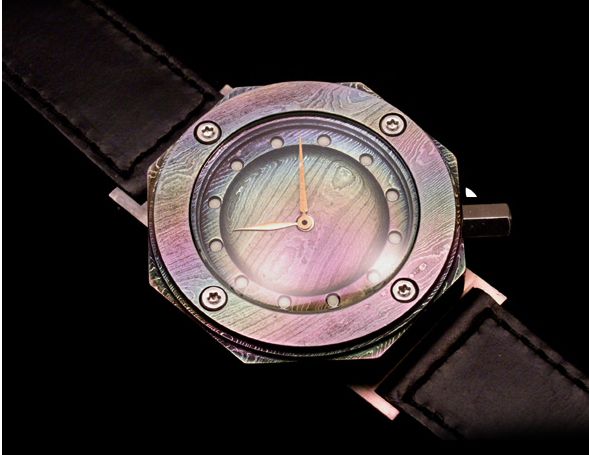 It should be clear that Angular Momentum is one of those luxury brands that feel comfortable with endless experimentation. I am amazed at the sheer wealth of watch designs the company has offered over the years. That combined with their one-off pieces and limited editions make for a brand that is worth watching constantly. I am always pleasantly surprised.

The process of layering steel has been going on for over a thousand years. Mostly in Japan to make swords. You know the typical Katana blade? I recall being in a Japanese sword museum in Tokyo, and seeing a good sampling of these swords. They had a few that were made literally over a thousand year ago, and looks like they were just made. This incredibly hardiness is a testament not only to Japanese dedication for their craft, but also the longevity of layered steel (part of process to prevent oxidation is the habitual oiling of the blades as I understand).

This layered/mosaic steel process is also known as Damascus steel. After the steel is layered, it is polished and shaped, with the thin lines of each steel later becoming visible. Often times there is a rainbow of color present which represents the effect of heat on the steel in the various elements in the steel that occur during the manufacture process. Damascus steel is commonly found today in high end knives and sometimes swords, which are mostly made for decoration. Occasionally however, you’ll see the process used in watch making, which is the case with this wonderful Angular Momentum watch. This is the Angular Momentum COLOR-TEC Damascene Ref. 9003, and represents what is in my opinion the most aesthetically pleasing of the Damascus steel COLOR-TEC watches in the collection. The Damascene has a case forged by Johan Gustafsson in Sweden, which makes sense give the various metallurgy bases in the country (coincidentally, Gustafsson’s popularity sparked the creation of the new Gustafsson & Sjogren watch brand). Often time watch makers are happy to source expert methodology when something is not their forte. The difficulty is in finding the right partner, and apparently Angular Momentum knows where to find the right people.

There is a distinct blacksmithy look to this watch, which is good. The shape of the case is deceptively refined, as it appears quite industrial. An octagonal case frames a four bolted torx screw bezel, and round dial. The dial has twelve drilled pits that serve as the hour markers, and simple, but effective hands that don’t distract from the artistic qualities of the rest of the watch.

Damascus steel often has a look of wood grain, as you can see in this watch. The effect adds an earthy quality to an otherwise highly industrialized look. The combination here is flattering to both design aesthetics and gives the watch a timeless quality – as though it could have been made yesterday or 500 years ago. The various levels and layers of the case construction add to the visual intrigue, making this an extremely beautiful watch.Further, for protection purposes, the steel itself is layered in an ultra thin layer of synthetic sapphire crystal similar to that used to make the sapphire crystal dial and caseback cover. Inside is an Angular Momentum automatic mechanical movement likely based on the ETA 2824-2 movement. The red decorated rotor can be viewed through the back along with the movement. You really get a sense of how thickly constructed the watch is by looking through the back and noticing how deep the dial is. The Damascene has simple looking set of lugs, which are purposely functional looking, and actually do go well with the contrasting angular and organic shapes on the case overall. A tidy black leather strap is nice and helps stress that visual attention remain on the watch case and body.

I think that this Angular Momentum COLOR-TEC Damascene deserves an aBlogtoRead.com Seal of Approval award. It is hard to refute the good looks of this watch, and the clever combination of ancient and modern techniques. Price is about $15,000 US. Well done (again) Angular Momentum.