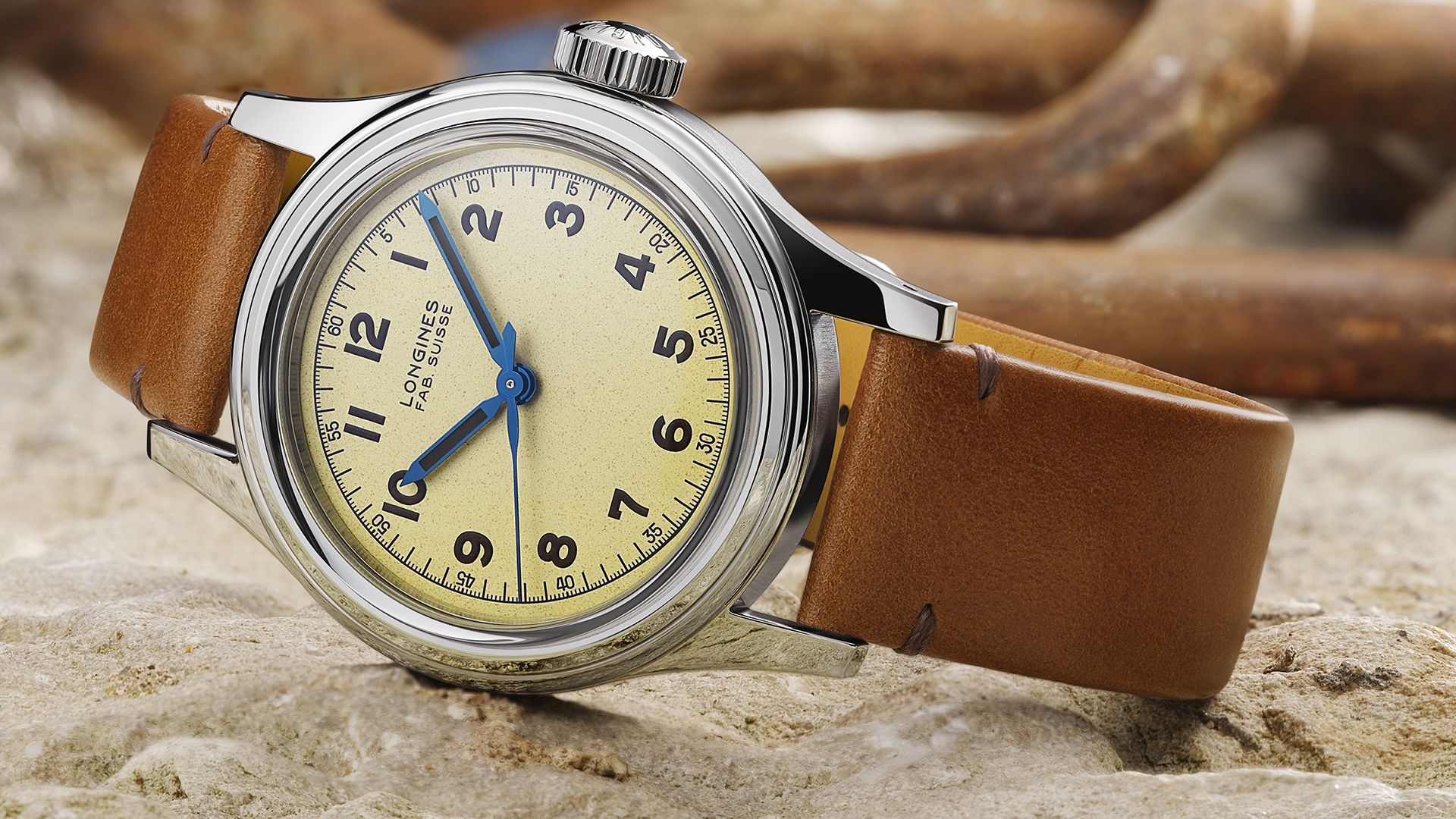 In a year filled with unique takes on vintage models, Longines has set itself apart not just for the sheer breadth of its vintage-inspired catalogue, but also for its dedication to accuracy in finishing and design. While pieces may be upsized for more modern tastes, for the most part Longines’ heritage reissues are as fastidious in replicating the feel of their vintage pieces as much as the actual look. For its latest heritage model, the brand has turned its attention back to 1947 and the classic 5774 model created exclusively for the French Navy. The resulting Longines Heritage Military Marine Nationale combines some of the most detailed and convincing faux patina on the current market with a clean and eminently wearable vintage design, creating a charismatic and distinctive piece suitable for daily wear. 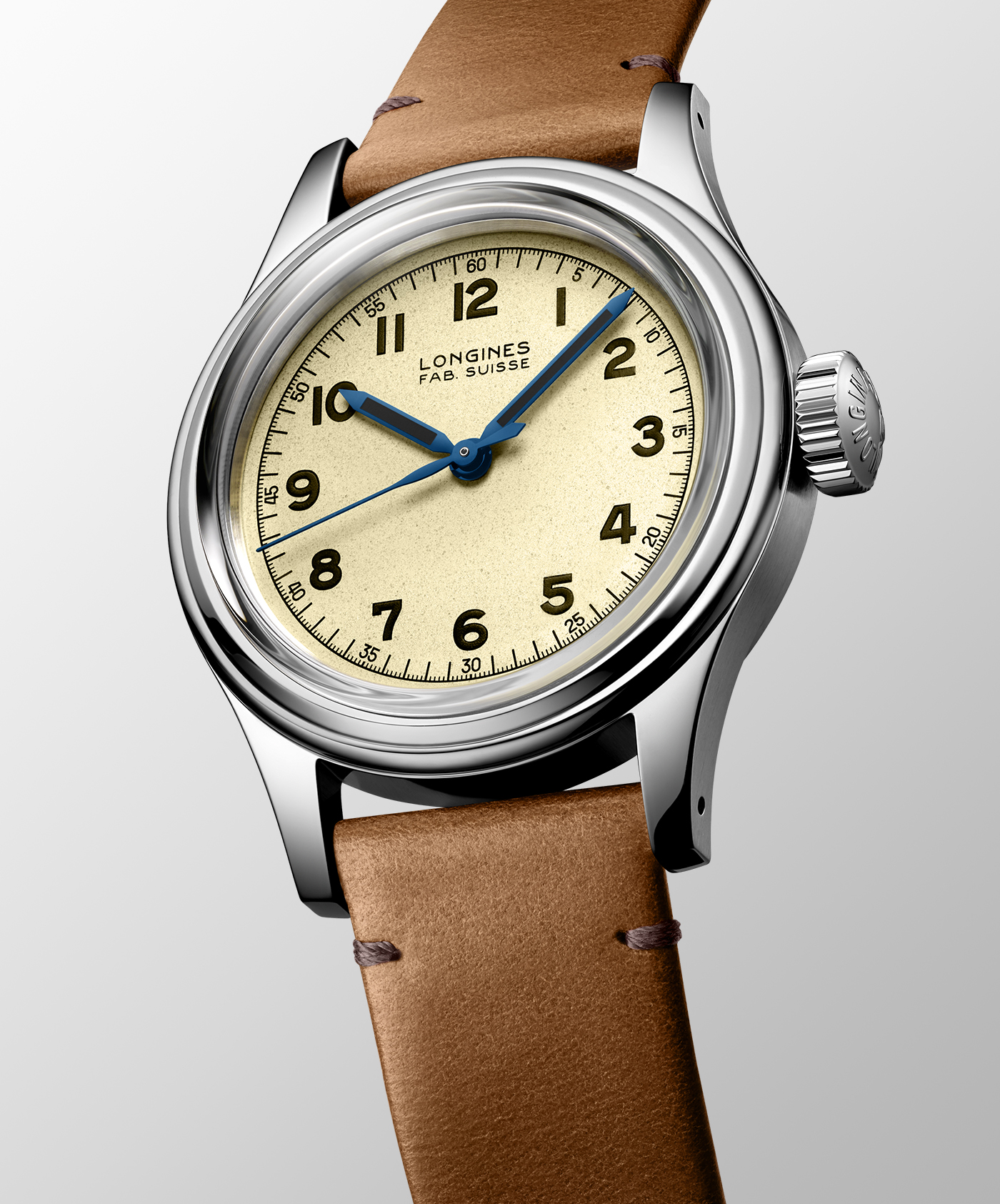 The Longines Heritage Military Marine Nationale’s largest departure from the original 5774 is the stainless steel case, which has been resized from the petite 33.5mm vintage model to a more modern 38.5mm diameter. The new model is still compact enough to give the feel of a small vintage watch on the wrist, while feeling solid and durable. The case design itself follows the formula of the original closely, with the distinctive double stepped polished bezel, box sapphire crystal, and long, narrow tapering lugs. From above, the entire case is polished, transitioning to a light, even brushing for the case sides. An oversized unguarded signed pillbox crown completes the midcentury look. One of the most faithful aspects of this case design, ironically, is perhaps its biggest weakness. With a naval issued timepiece like the original 5774, a certain amount of water resistance is obviously to be expected, and for the 1940s a 30 meter depth rating would have been relatively respectable. In the modern world of 100 meter rated dress watches, however, the 30 meters of water resistance for the Heritage Military Marine Nationale feels more than a touch underwhelming. 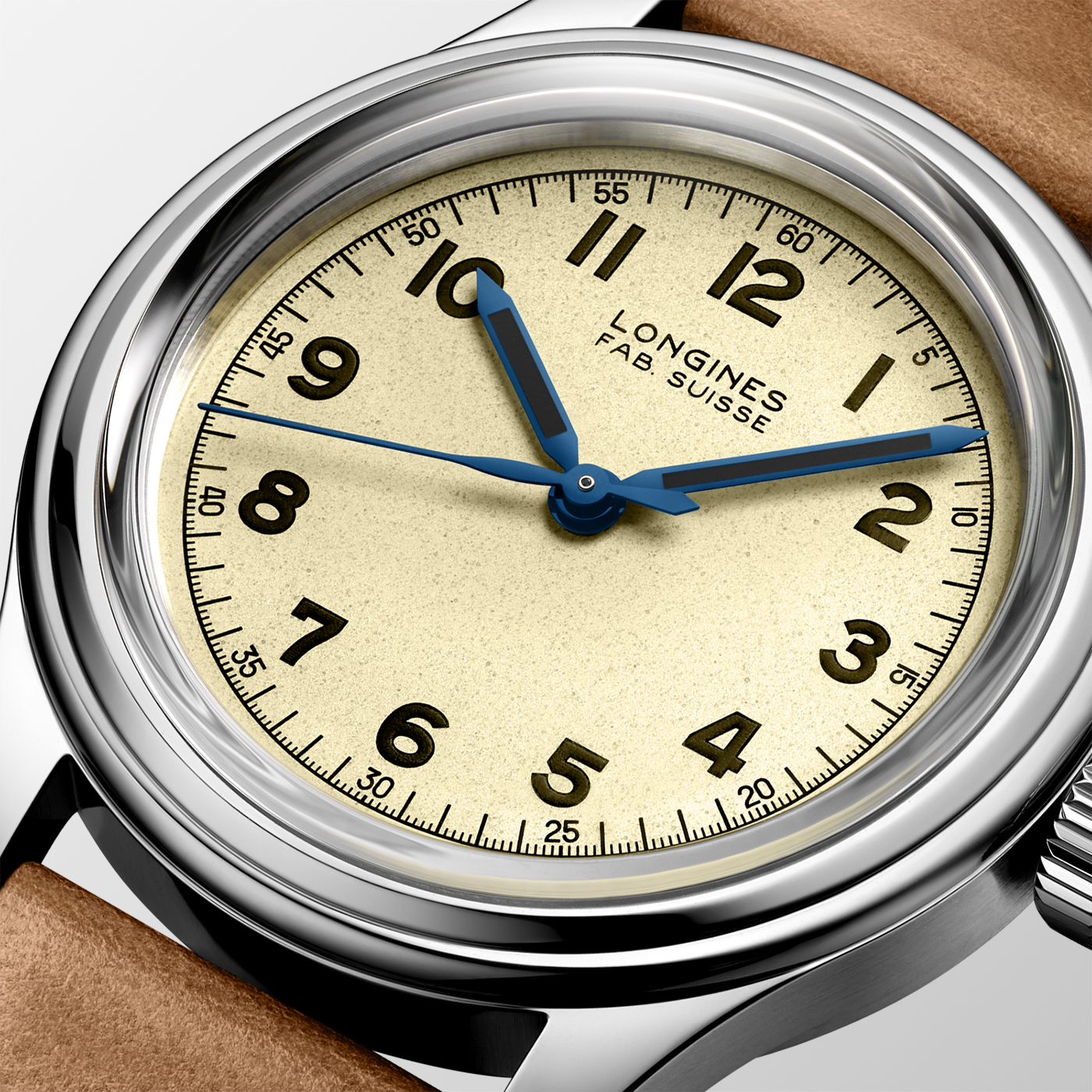 The dial of the Heritage Military Marine Nationale is impressive in both its accuracy to the original and its execution. Most models in Longines’ Heritage line aim to recreate vintage pieces not as they were upon release, but as a prime example would appear now, and while the use of fauxtina can be divisive among enthusiasts there can be little doubt that the brand are masters of that particular craft. The overall dial design is simple, with bold lumed Arabic numerals and blued hands, but the details set it apart. The distinctive counterweighted central seconds hand is carried over from the 5774, with its distinctive bulge near the base, and the dial text is the exact font and wording used in the ‘40s original. At first glance, the main dial surface is a warm bone white opaline, but close review reveals a random pockmarked pattern in light gray, simulating the aging process of white dials from that era. Likewise, most brands looking to add a patina feel to a dial apply khaki lume and call it a day, but Longines’ approach to lume is far more considered. Radium luminous paint has a tendency to darken past tan to almost black over long periods of time, especially when exposed to moisture and humidity as a naval-issued watch would be. To properly portray this, the brand instead opts for a dark mossy brown, appearing nearly black at some angles. Added together with the dial, the look of the dial is less like a new watch made to look old, but an original watch preserved in lightly used condition. Beyond simply being a showcase for Longines’ fauxtina craftsmanship, it’s a style that works well on its own with a unique charm. 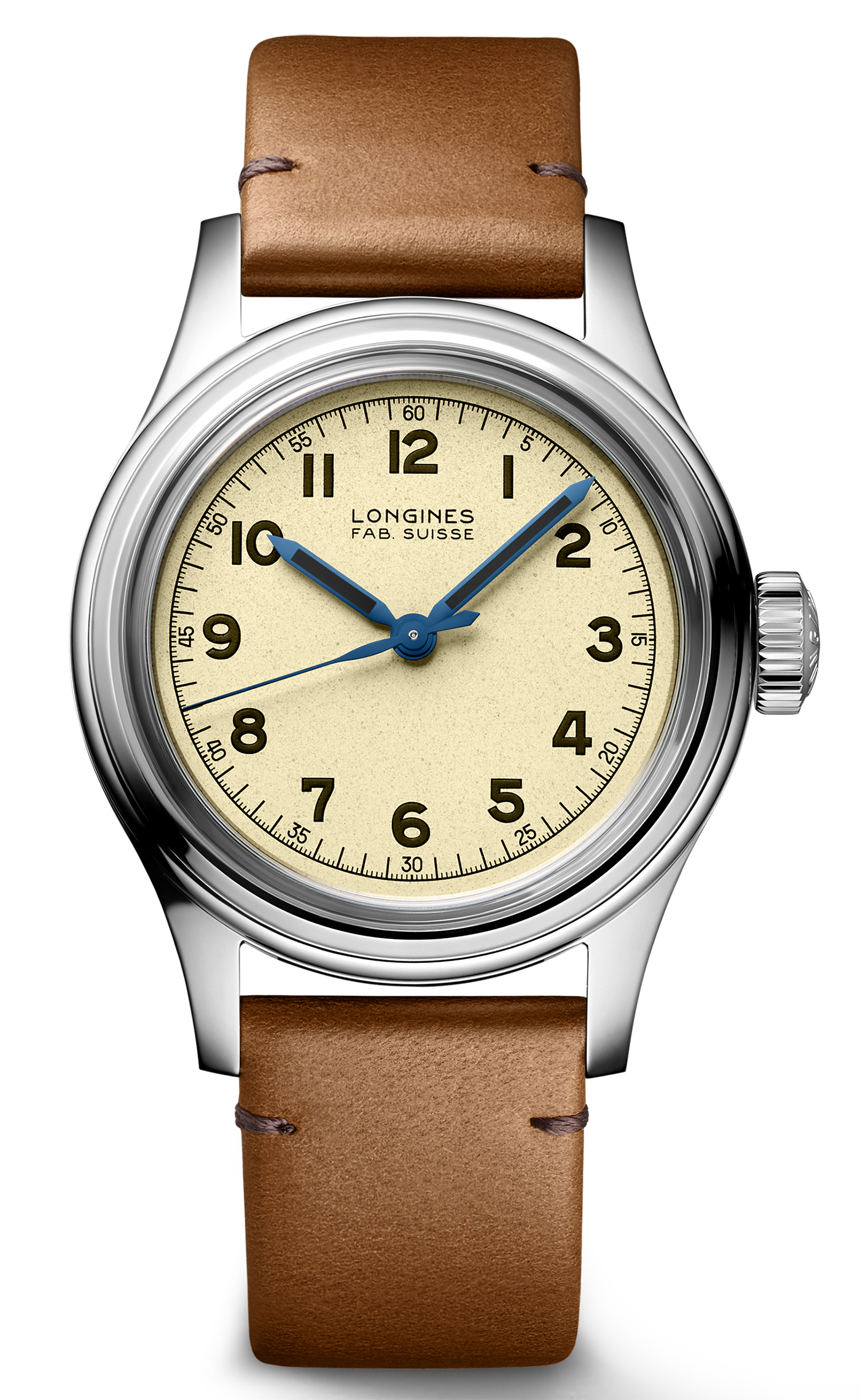 Longines powers the Heritage Military Marine Nationale with the ETA based L888.5 automatic movement. Made exclusively by parent company Swatch Group for Longines, the L888.5 boasts a few impressive features including a silicon balance spring. Power reserve performance is also impressive, with a full 64 hour reserve at a 25,200 bph beat rate. For the strap of the Heritage Military Marine Nationale, Longines doubles down on the vintage flair with a minimal caramel brown leather offering with matching stitching. This rich, warm tone helps to bring out the patina tones of the dial and works as a versatile option for dressing up or down. 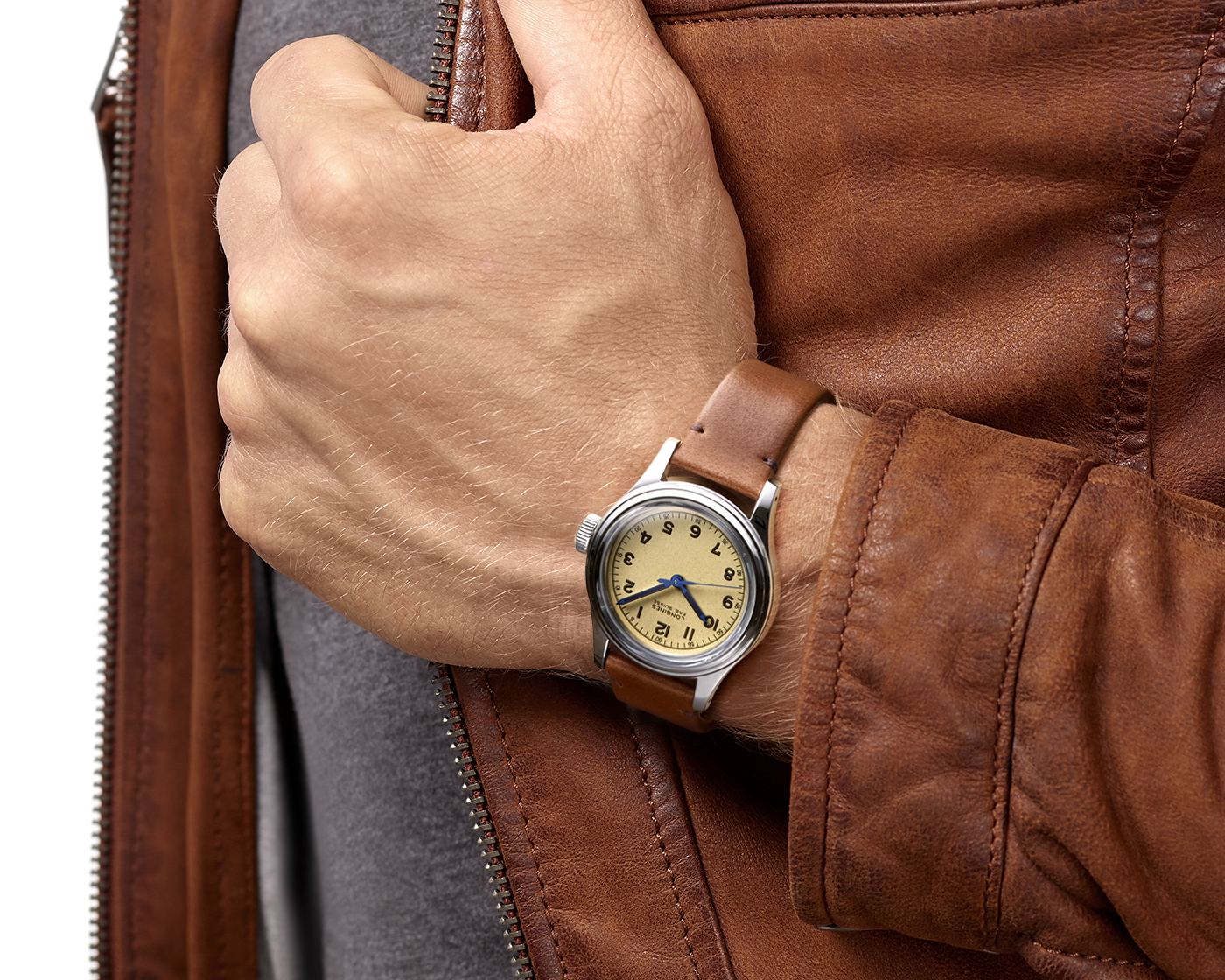 With the Heritage Military Marine Nationale, Longines has further expanded its formidable list of 2020 novelties with a faithful and versatile new military inspired three hander. The Longines Heritage Military Marine Nationale will be available from authorized dealers in either late September or early October 2020, at an expected MSRP of $2,000. For more information, please visit the brand’s website.