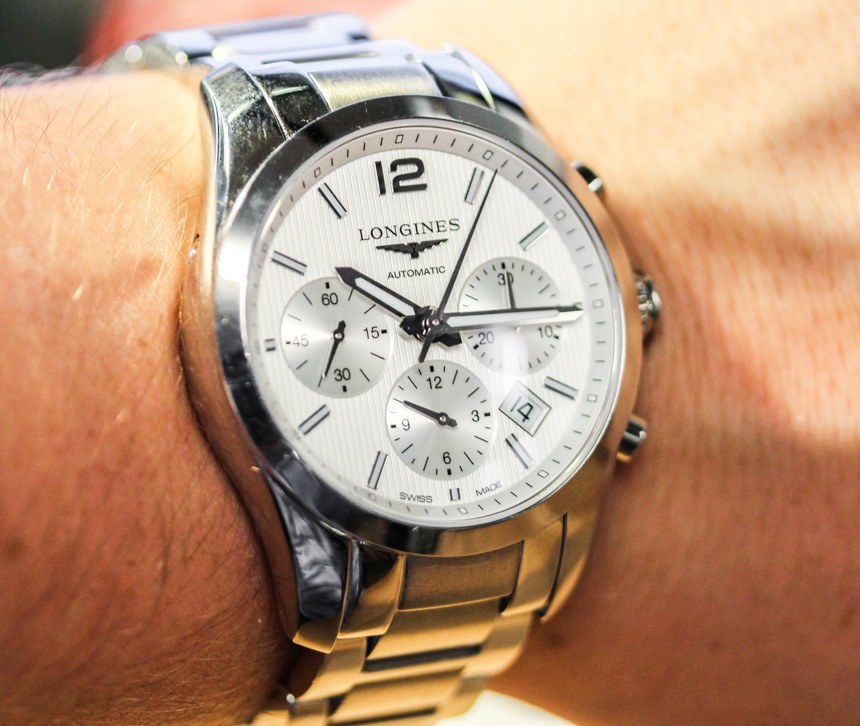 The Longines Conquest Classic Chronograph is everything its name implies it to be: a tri-compax chronograph with traditional design elements, made as part of the brand’s Conquest collection and hence styled to represent what Longines likes to call “sporting elegance.” We went on to spend some wrist-time with it, as it was the timepiece handed out to the winning jockey of this year’s stop in the Triple Crown race of thoroughbred horses. In 2014, Longines continued their long support of professional equestrian sport as the official timekeeper for the Triple Crown. And while California Chrome offered up a disappointing show at the Belmont Stakes, Longines stayed the course, as they have for well over one hundred years.

Last year, we attended the 139th Running of the Kentucky Derby, and were treated to a hands-on review of their Saint Imier Chronograph, the watch presented to the winning jockeys. This year, we joined Longines in Baltimore for the running of the Preakness, the second stop in the Triple Crown races, and were lent this year’s version of the Jockey’s timepiece, a Longines Conquest Classic Chronograph.

While the Preakness isn’t quite as refined as the Derby in regards to the showing off of men’s and women’s style (it is, after all, in Baltimore…), it is every bit the spectacle, with live music, entertainment, more food and drink than you could possibly imagine, and a small dose of ill-advised racetrack betting – just to balance everything out. In short, it was a lot of fun, and many thanks to Longines for having us along again this year.

The watch scene wasn’t all that bad, either – read on for details! 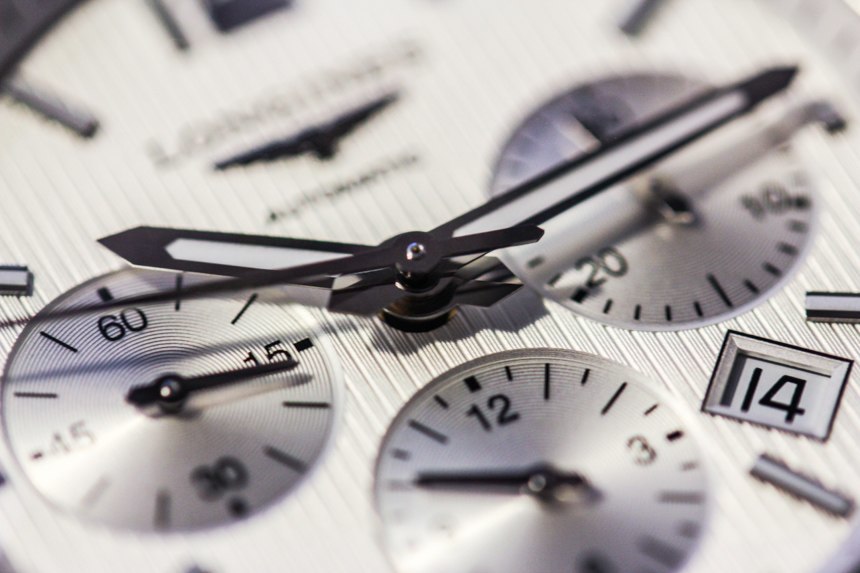 The Longines Conquest Classic Chronograph we had in for review is the all-steel version with silver dial on a steel bracelet, the same version presented to the winning jockeys during this year’s Triple Crown. The collection also includes versions in both solid 18k pink gold and with two-tone steel/pink gold cases, as well as versions of each with a black dial. In each instance, the case measures in at 41mm in diameter, with an approximate thickness of 11mm.

The case itself is a large polished steel element, a relatively reserved design with traditional elements such as a polished bezel and standard lugs to fit the matching steel bracelet. The crown sits at 3 o’clock and non-locking barrel pushers reside at 2 and 4 o’clock. Both the front and rear crystals are sapphire, the rear display back showcasing the Longines Calibre L688. 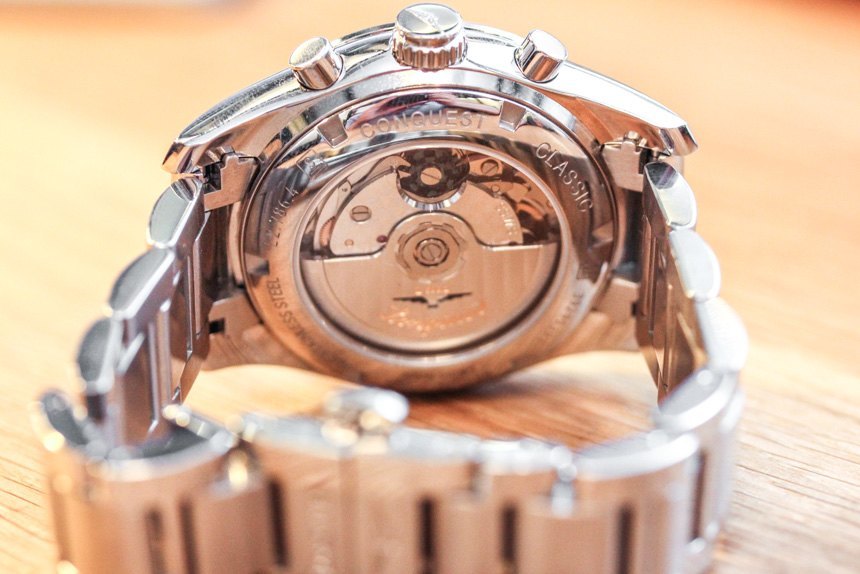 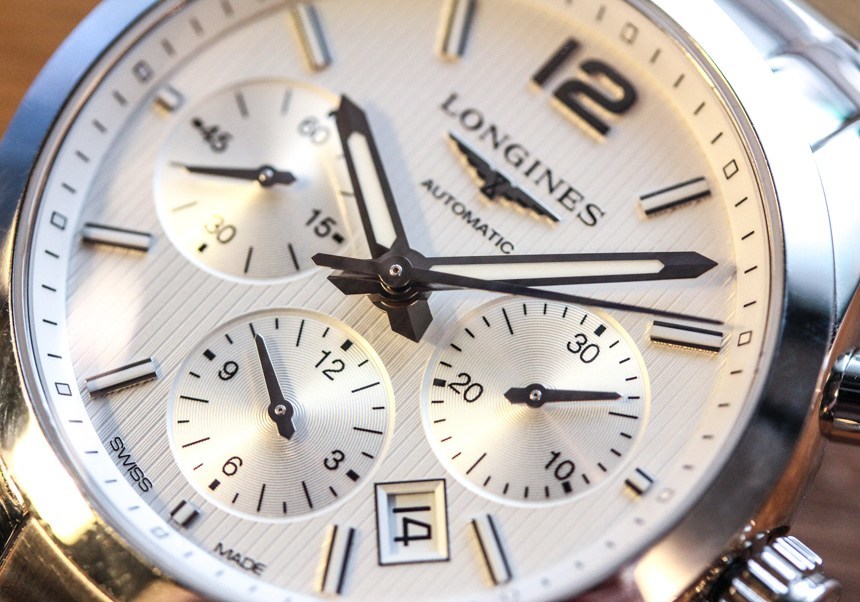 The dial layout consists of a classic triple subsidiary register setup, with a 30-minute counter at 3 o’clock, 12-hour counter at 6 o’clock, and subsidiary seconds at 9 o’clock. A date window is nestled in between the 4 and 5 o’clock positions on an angle. Polished steel stick markers and sword hands with luminescent elements round out the bright silver coloration of the dial, which features vertically striped texturing throughout. The subsidiary dials are finished with a concentric grooved pattern.

The L688 is based on the tried and true ETA (neé Valjoux) 7750 movement, modified to include a column-wheel chronograph function. This movement is found in various forms throughout their collections and in similarly modified forms throughout the Swatch Group umbrella. It beats with an amplitude of 28,800hz and has a power reserve of roughly 54 hours. 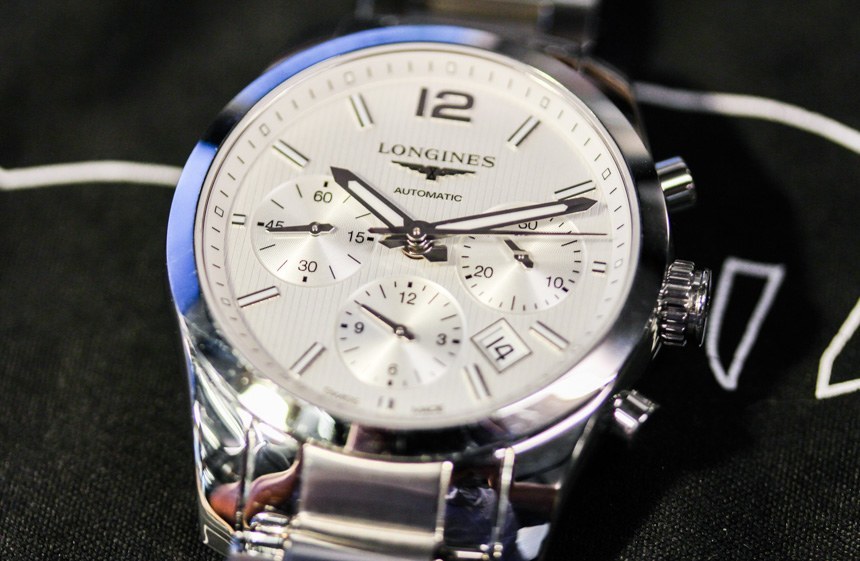