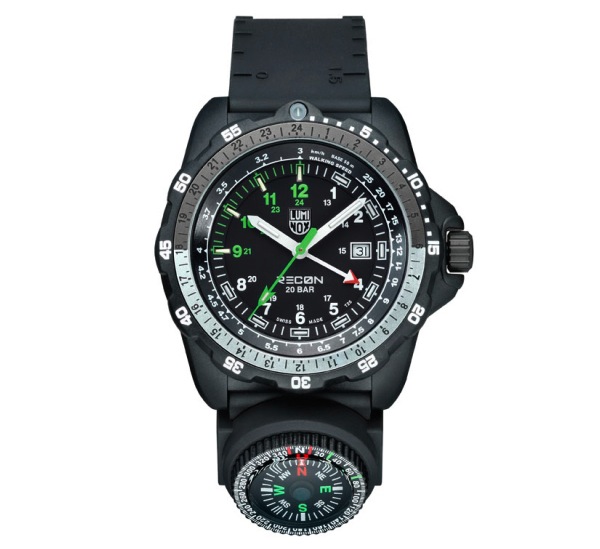 Luminox has announced a new model called the Recon Nav SPC (Navigation Specialist) which offers a feature set that the fifteen-year-old Me would have killed to have for orienteering meets. This new model looks to be a complete solution for map-based navigation when you’re out in the wild and need to chart a path back to civilization. Featuring a walking-pace tachymeter, a strap-mounted compass and a strap which can be used to calculate distances on a map, this Luminox is an old-school analog navigation tool in a modern platform.

The Nav SPC employs a 46mm carbon reinforced polycarbonate case with an anti-reflective sapphire crystal and the Luminox-standard compliment of tritium tubes for low-light illumination of the hands, markers and bezel position. The design is obviously that of a Luminox, but the dial markers are oddly asymmetrical with 1 through 8 (blue illumination) in an orientation that is parallel to the dial edge and 9 to 12 (yellow illumination) in a more traditional perpendicular arrangement. Timekeeping is quartz based, with the Nav SPC using a Ronda 515 movement offering a 24 hour GMT hand and a date display at three o’clock. The unidirectional dive-style bezel has a yellow tritium pip at 12 and the Recon Nav SPC’s total weight comes in at just 72 grams. 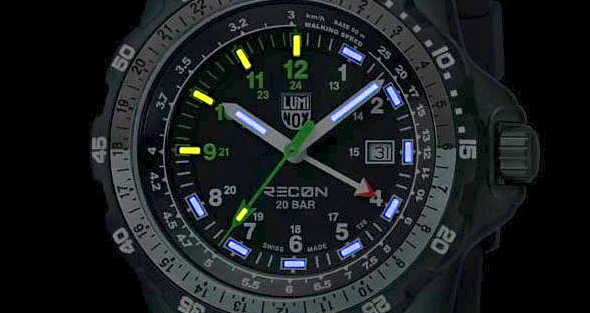 The black 24mm polyurethane strap is home to not only a removable compass but also indication for three common map scales and a chart for converting between centimeters and inches. Conceivably, with a map and this watch, you could use the compass to establish a heading, the strap-based scales to identify distance and the length of a route, and the walking-pace tachymeter to predict travel time and monitor your pace.

Luminox is a brand that makes almost exclusively tool watches and they have a solid reputation for tough military-inspired watches that never sacrifice legibility thanks to their tritium-based illumination system (which Luminox calls night vision tubes). At 46mm wide, I find it hard to see the Nav SPC as a practical everyday piece, but as an analog alternative to watches like the Casio Pathfinder, this Luminox makes a lot more sense. Yes, it has less features than a Casio or Suunto, but the analog nature of the Nav SPC may be very appealing to those adventurers who prefer a physical map to a GPS or digital compass. Pricing should be around $450 USD and buyers will be able to choose between models with either miles or kilometers listed on the walking pace tachymeter display. With summer, and hiking season, just around the corner, would you head out into the backwoods with this Luminox on wrist? Let us know in the comments. luminox.com