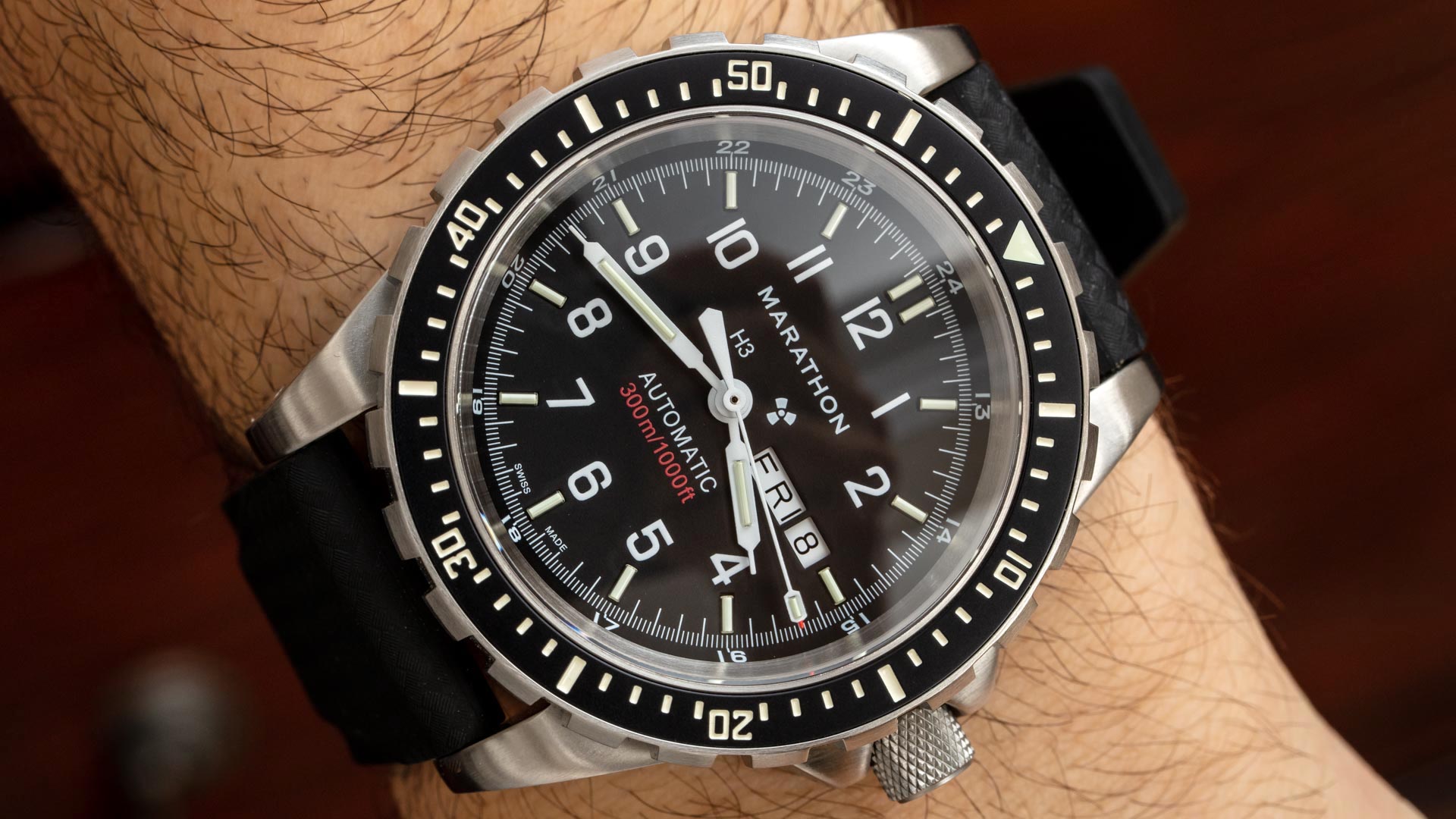 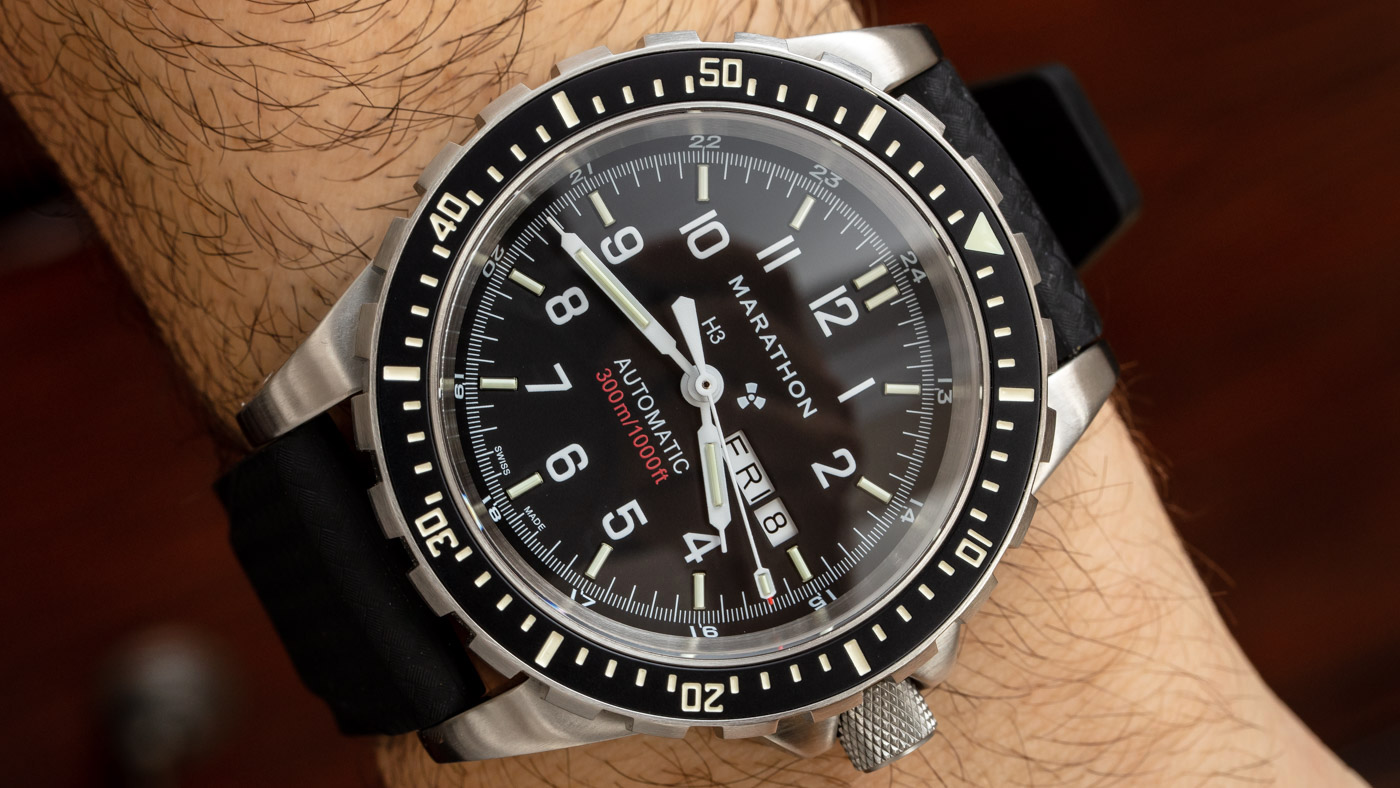 The largest wristwatch currently produced by Canadian Marathon is the Search & Rescue Jumbo Diver’s Automatic “JDD.” “JDD” means “Jumbo Day Date,” and this is an interesting watch to talk about since it has both tool watch and lifestyle watch components. In essence, the JDD is a larger 46mm-wide version of the 40mm-wide Marathon GSAR watches (Government Search & Rescue) that aBlogtoWatch reviewed here. The Jumbo, however, includes a Swiss-made movement with a day/date display in addition to its larger proportions. 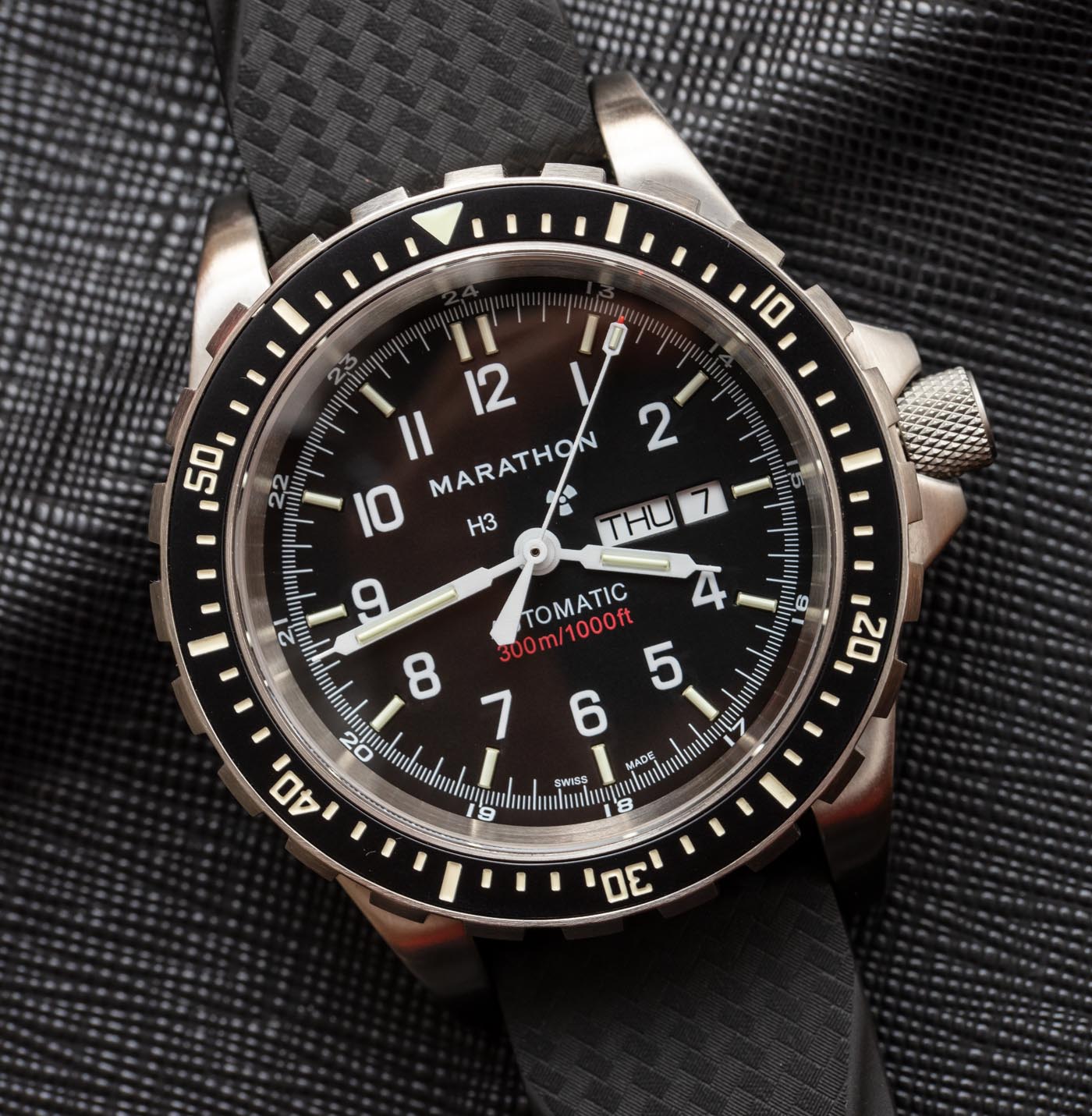 The Marathon Jumbo Diver’s Automatic watch is a real tool watch that is military-approved, as well as one of the products Marathon makes that is actually purchased by some military agencies. For that reason, Marathon is among the last (perhaps the very last) traditional watch brand to say that it actually sells watches to military agencies in the Canada and United States. It is, however, a bigger watch that is “extra- noticeable” on the wrist. One way I look at the JDD is similar to how people like Panerai. How is that? The concept begins with a no-nonsense functional theme that just happens to be large and showy — exactly what a lot of guys like to wear on their wrist. 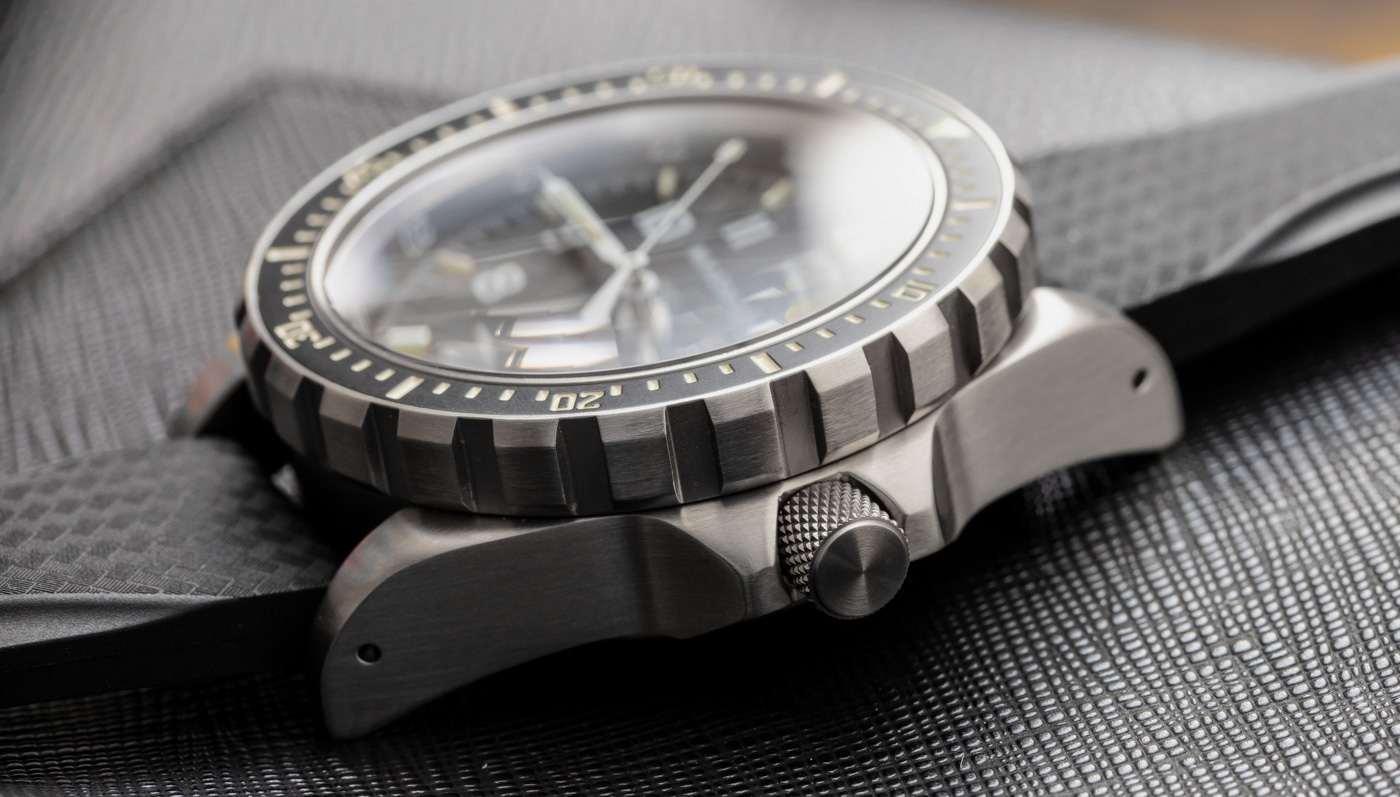 While the 40mm wide Marathon GSAR gets watch collector feedback such as, “It is the perfect size,” the most common complaint about the Jumbo is its size. “That is way too big” is how some people view the 46mm-wide and nearly 18mm-thick brushed stainless steel case that has a roughly 55mm lug-to-lug distance. The JDD is extremely well constructed, feels solid, and offers 300 meters of water resistance with a thick sapphire crystal. The reason I mentioned Panerai before is that both the Marathon JDD and many Panerai models share a similar volume presence on the wrist and are theoretically the same type of watch. The JDD is far less expensive, given that it isn’t trying to be a luxury object, and it also feels a lot more contemporary in design. That said, the in-your-face “look, I’m wearing a bit sports watch” theme, which Panerai does so well, is also well expressed with the Marathon Jumbo Diver’s Automatic on the wrist. 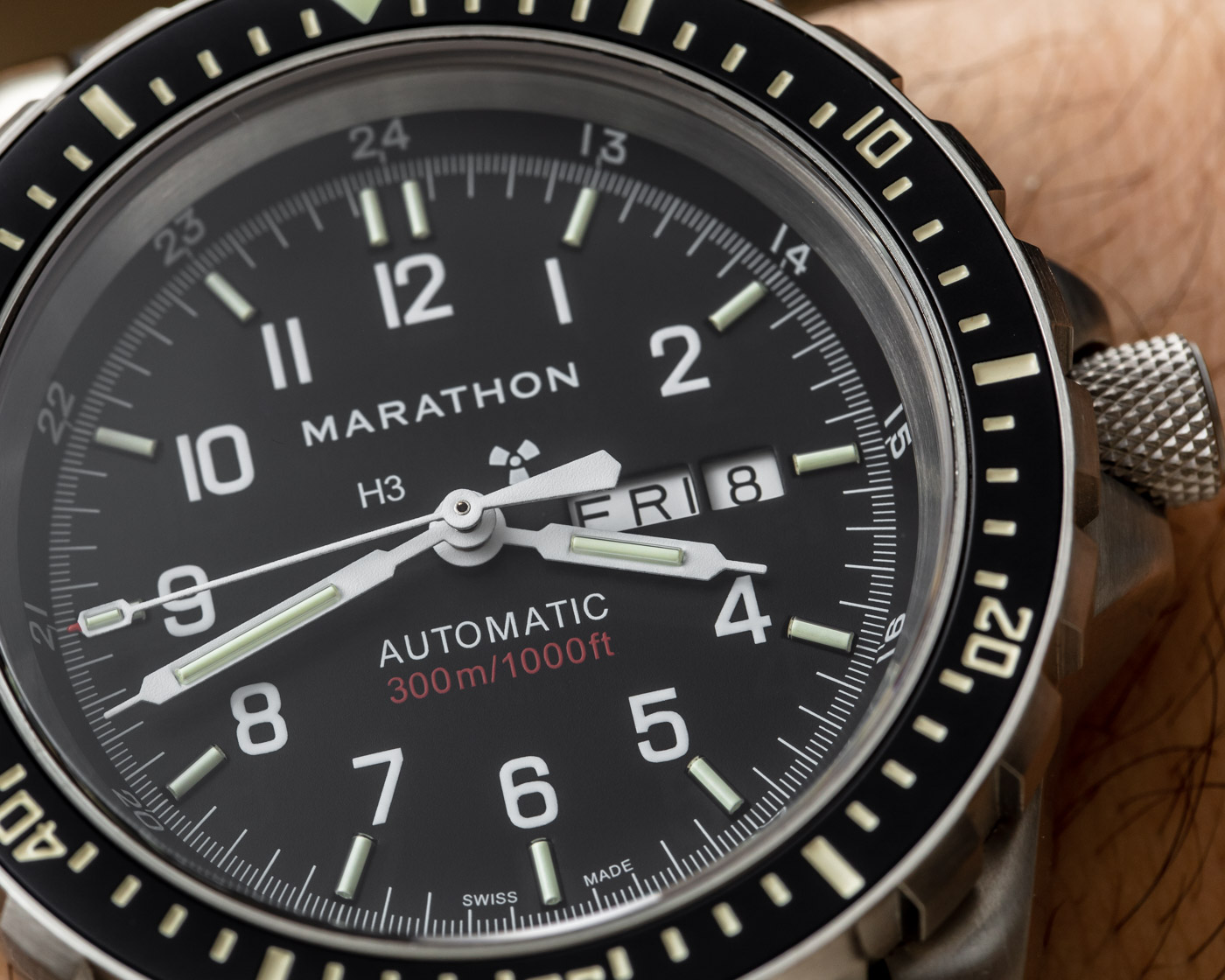 The deep dial is simple but has all the markings a military-style watch needs; legibility is great. Self-illuminating tritium gas tubes are used for the hands and hour markers for flawless night viewing, and I like how the 24-hour time scale is placed on a flange ring around the dial, as opposed to taking up valuable main-dial space. Given the larger size of the dial, the day/date windows don’t really take up too much space, even though they do cannibalize the 3 o’clock hour marker. The only improvement I would make here is to have Marathon use matching black calendar discs (as opposed to white ones) that highly contrast on the dial. 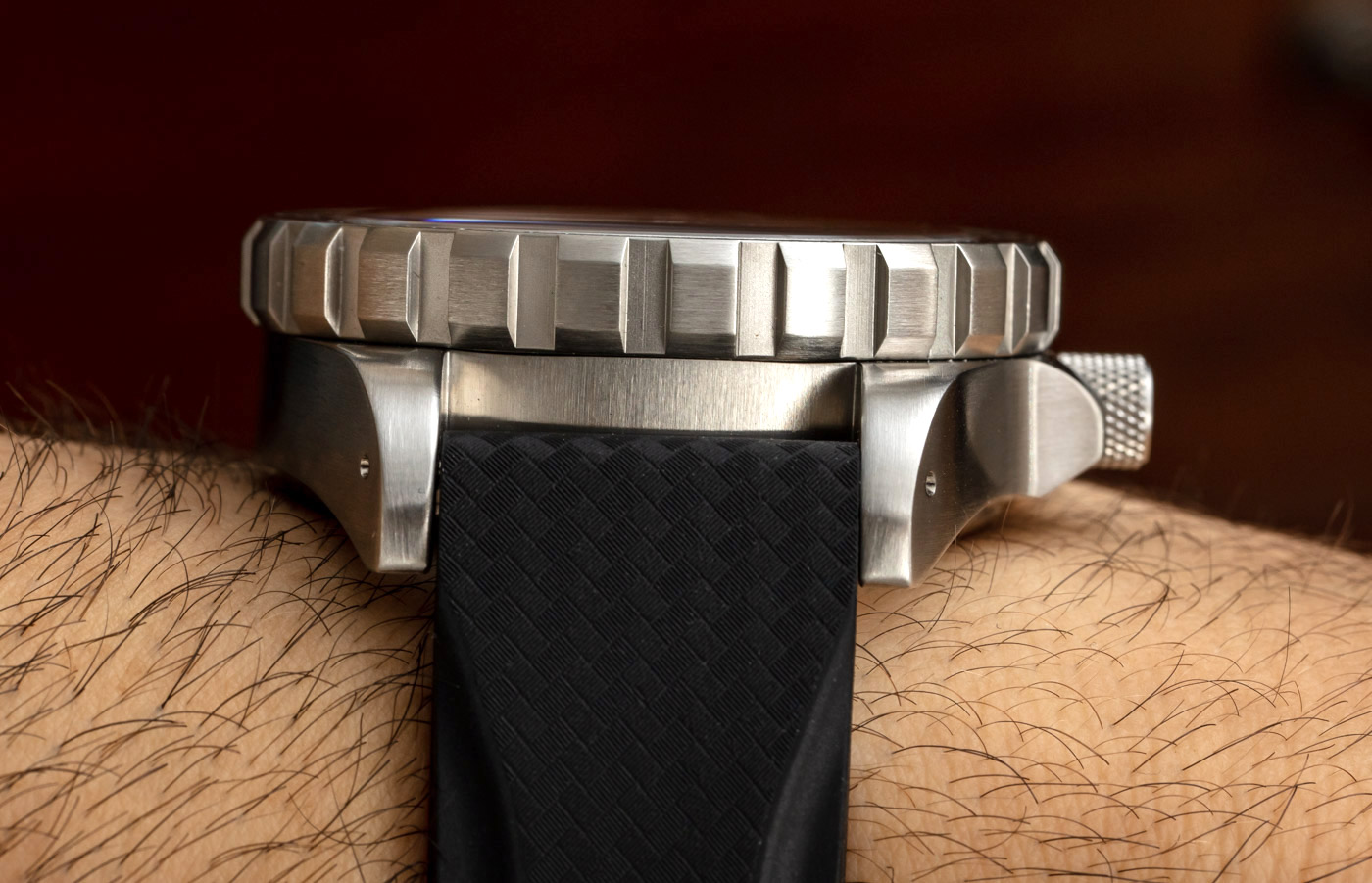 One of the signature design elements of the GSAR and also the JDD is the extra-high rotating bezel, which is designed to be used with gloves. The steep diver’s style rotating bezel and knurled crown are just two of the functional features on the watch which end up also serving cosmetic purposes for those people who see the JDD and say “cooool.” The watch is a big timepiece but is also a very neat-looking one. Absent are any luxury pretentions, meaning that there is no real risk of appearing as though you’re merely trying to show off using the watch. If anyone says, “Why do you need to wear such a big timepiece?” then just remark on how the dial is easier to read! 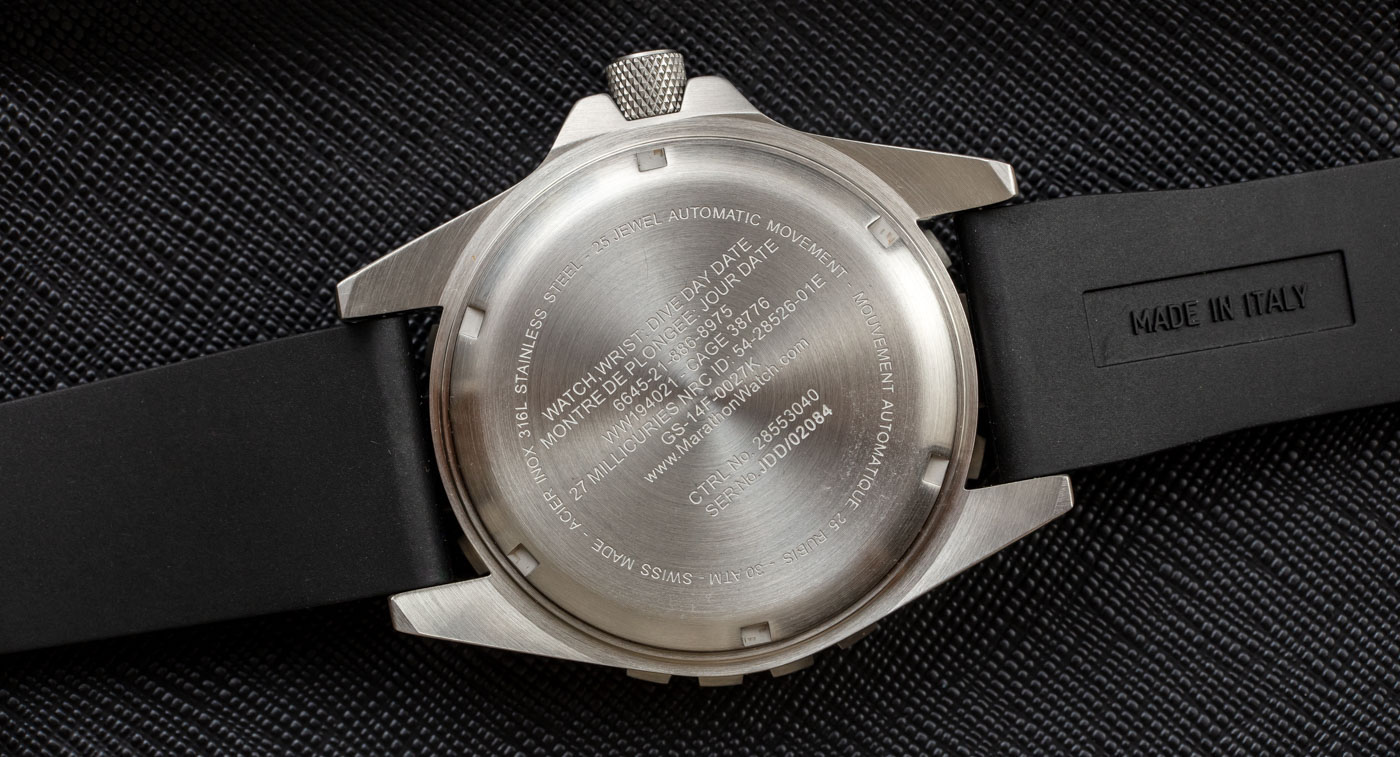 Even though Marathon is a Canadian company, the brand’s wristwatches are assembled in La Chaux-de-Fonds, Switzerland — and with Swiss-made movements. Inside the Jumbo Diver’s Automatic is a Swiss ETA 2836-2 automatic day/date movement that operates at 4Hz with about two days of power reserve. Marathon offers the JDD both on a comfortable 22mm-wide black rubber strap and a three-link steel bracelet. The latter isn’t going to be as sporty or utilitarian but it does help give the watch a dressier look. Even though I am typically a bracelet guy I prefer the JDD on a strap. 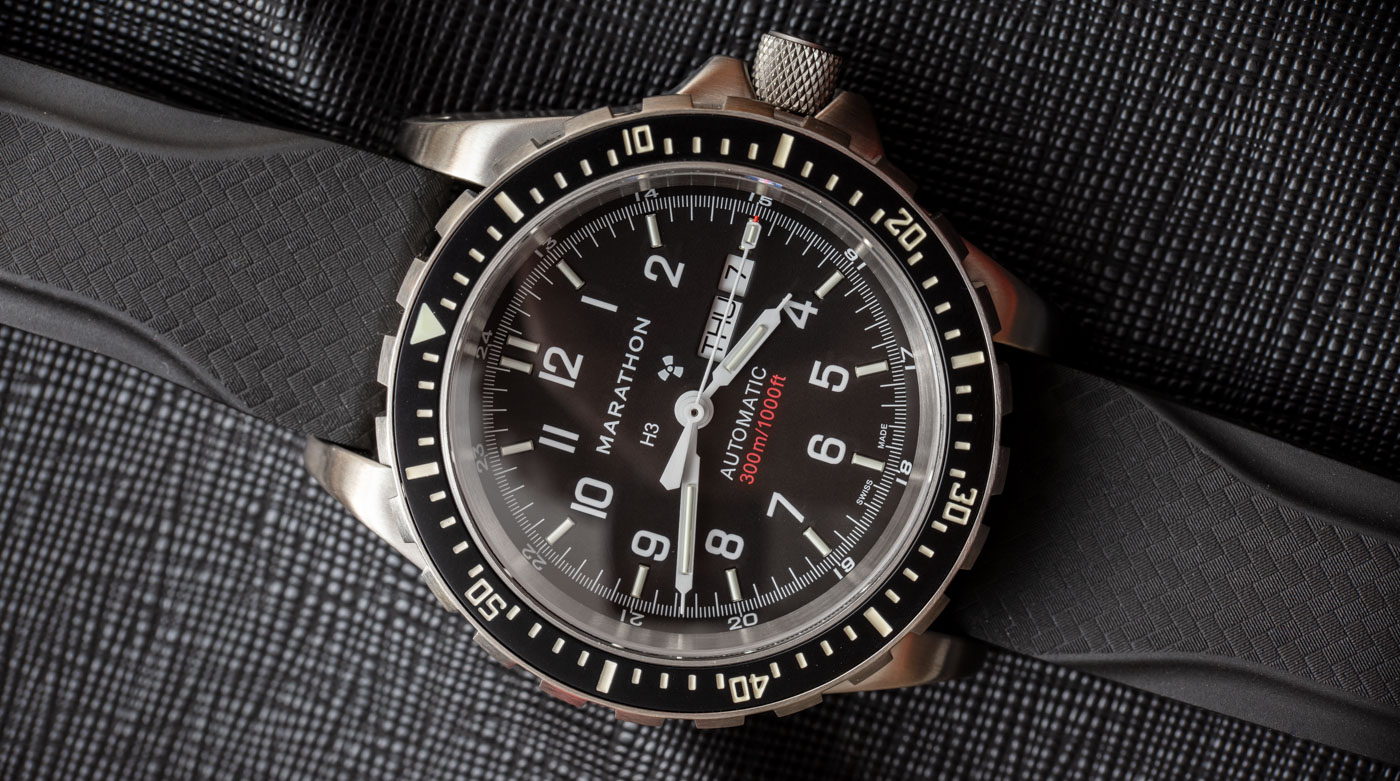 Even though the JDD watch is large and might not be as practical as its smaller Marathon GSAR cousin, it has a wonderful wrist presence and is comfortable despite the size. People seeking a Panerai-like big sports watch experience but who aren’t interested in spending luxury prices or who want a less-loaded message on their wrist will probably really like what the Marathon Jumbo Diver’s Automatic watch has to offer. Price for the JDD reference WW194021 on the strap is $1,700 USD and the reference WW194021BRACE is $1,900 USD. Learn more at the Marathon website here.