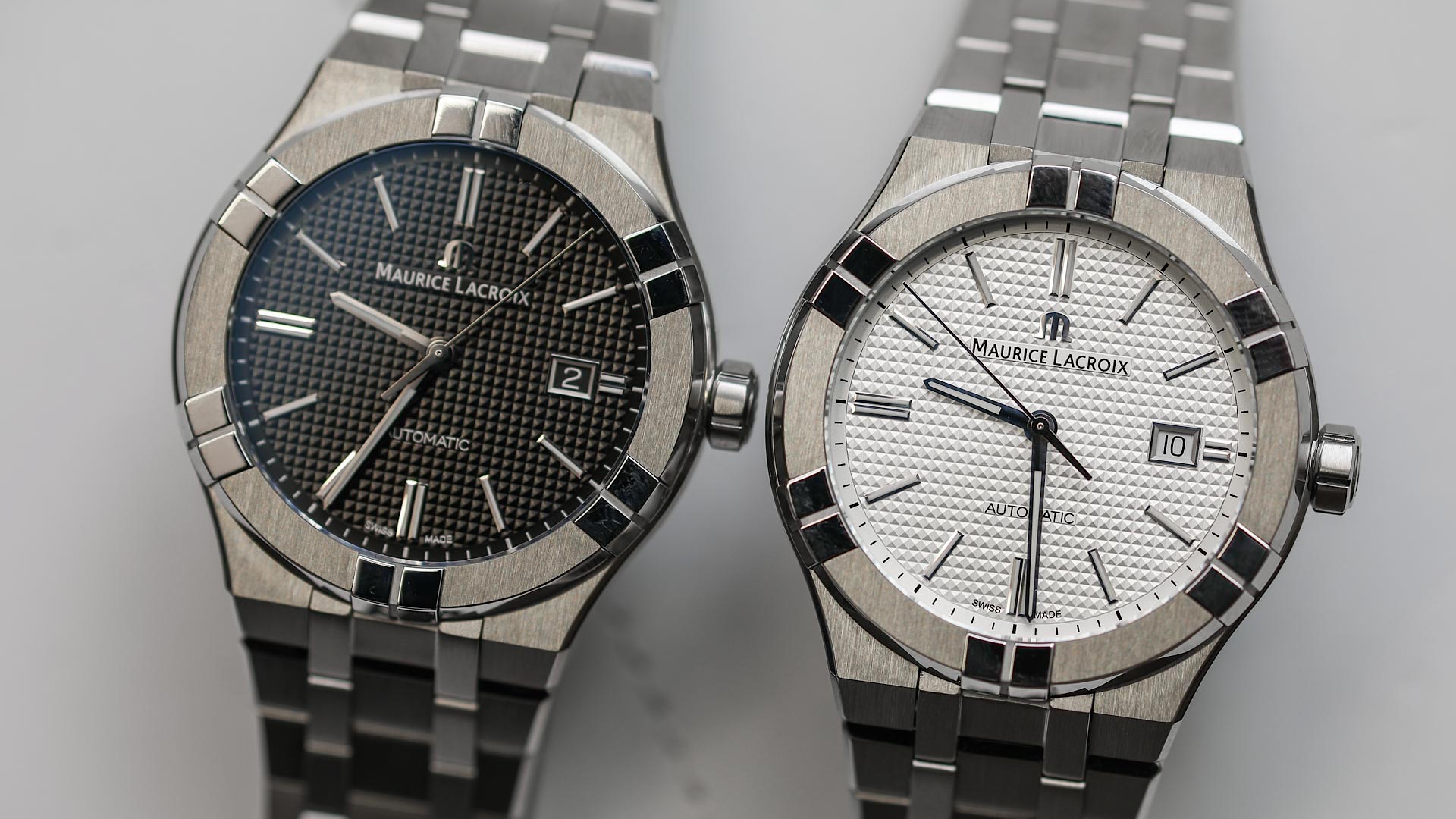 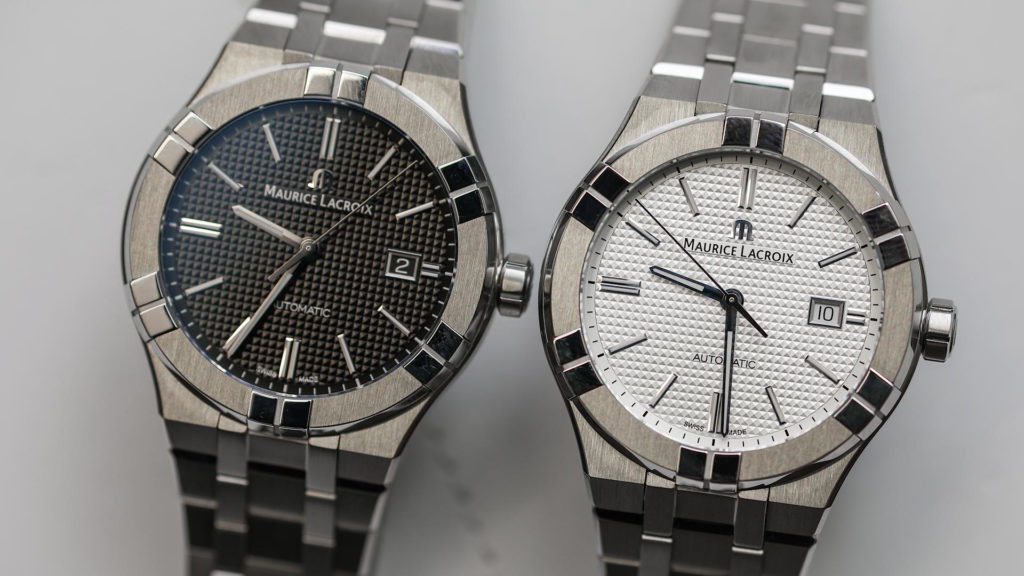 Baselworld 2018 saw the release of a slew of re-issues with modern designs, but none quite like the updated Maurice Lacroix Aikon Automatic collection. The long-promised model has been anticipated by fans of the brand and piqued interest for those who may not have considered Maurice Lacroix before. With the inclusion of an automatic movement and some aesthetic refreshes, the Aikon Automatic positions itself as a very attractive and affordable model in the sports watch landscape. Here we will go hands-on with the model, discuss what’s new, and why it’s important. 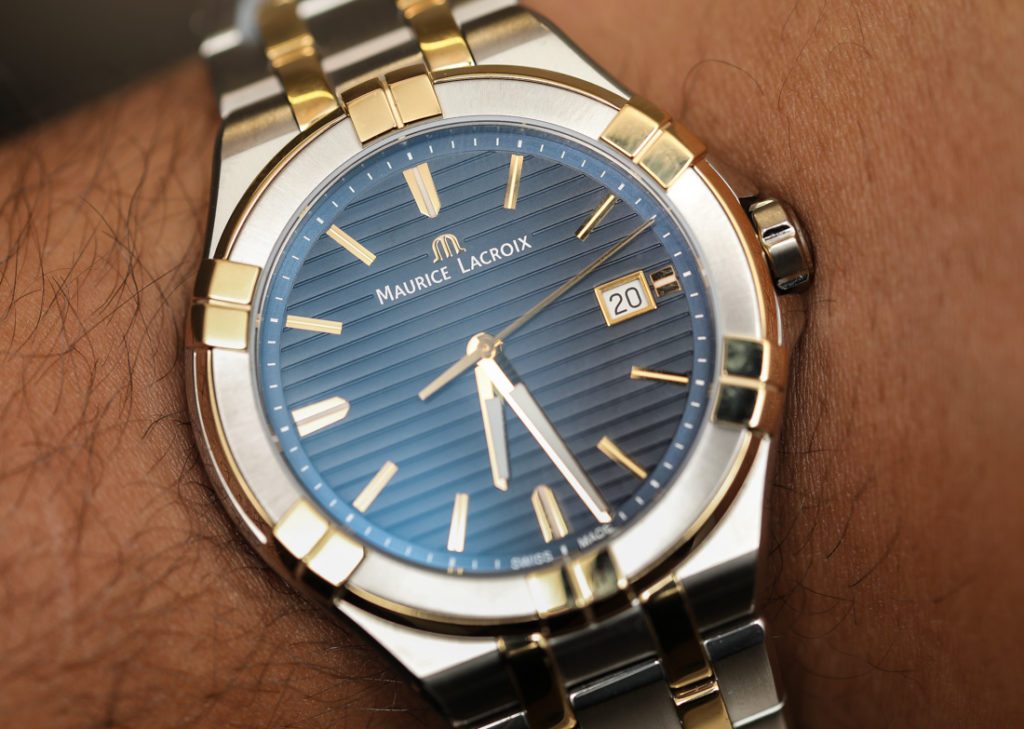 Sports watches have been in the spotlight more and more recently; the biggest players being the AP Royal Oak, the Patek Philippe Nautilus, and the Vacheron Constantin Overseas. While obviously beautiful and high-quality watches, you would have to sell a spare BMW to afford even one of them. That’s where I was when I scooped up the previous iteration of the Aikon Gents. I was in the market for an affordable sports watch that didn’t break the bank and that’s exactly what I got. The quality was top notch, the size was perfect, the fit was pleasing, and it was one of the highest quality bracelets I’ve ever had in the price segment. The only drawback was that it was quartz and while that didn’t necessarily deter me, it turned a lot of enthusiasts off to owning one – something the Aikon Automatic 3-hander rectifies.

Let’s start with the case. For a sports watch, I find the stainless steel barrel shape to be a perfect size at 42mm x 11mm thick – not too big, but large enough to be legible. The Aikon has always taken a lot of its inspiration from the Calypso models of the ’90s and those were always immediately recognizable from the “Claws” surrounding the brushed steel bezel. Something they’ve improved on with Aikon Automatic is the shape of the case. Gone are the rounded and bubbly lugs and claws and included are refined and crisp lines making the watch look and feel more modern than vintage. It also prevents the taper of the lugs to the integrated bracelet from the slight flare outward on the wrist (though admittedly, larger wrists may still see it). The brushed bezel with a polished outer edge has a harsher angle and that makes the polished claws seem more uniform to the bezel instead of sitting on top of it – especially when looking at it straight on. 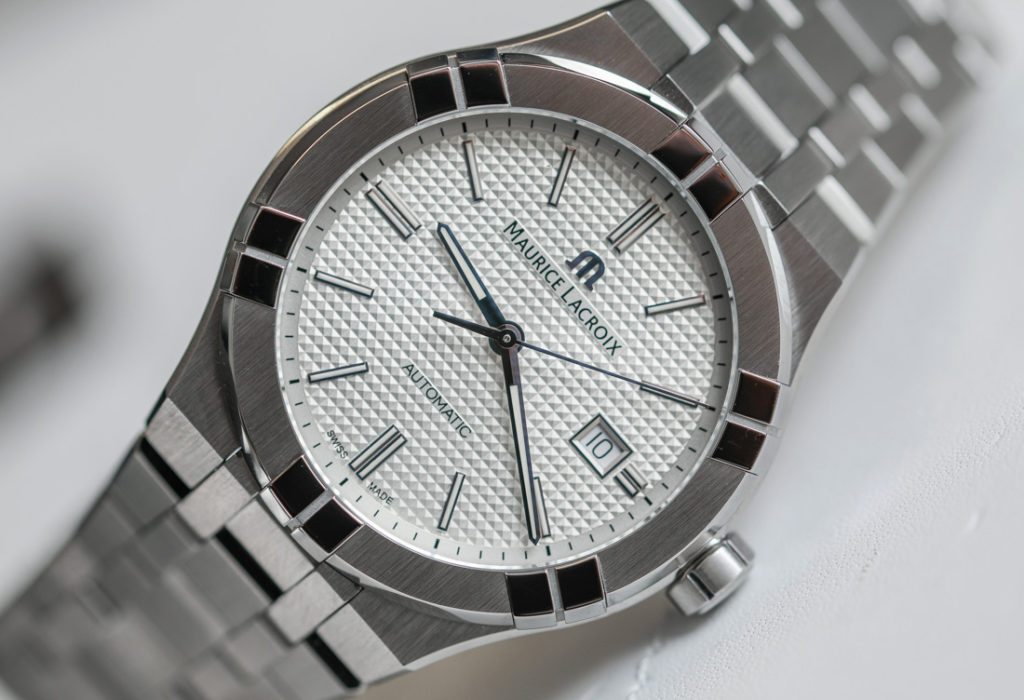 Moving on to the dial, there are three color options with sweeping, though largely subtle changes that many would miss if they hadn’t handled the previous Aikon Gents recently. Brandishing all-new indices that are slightly thinner, a bit more refined, and with thicker lume qualities, the Aikon Automatic takes a more legible approach to darkness. Additionally, the handset has been reshaped and thinned out creating more dial space for the slightly larger logo and ‘Automatic’ text above 6 o’clock.

The dial has been changed from a striped pattern to a Clou de Paris texture, which isn’t going to help with the accusation that the Aikon Automatic has borrowed design qualities from Audemars Piguet (we will get to that later). Personally, I prefer the look of the new dial over the old – it feels more contemporary. Both have high-quality finishes, but the Aikon Automatic feels more meticulously crafted and there is something satisfying about seeing the different shadows and shades when the handset moves over each pyramid. Much to my enjoyment, the date window at 3 o’clock has been… MATCHED! Now instead of a simple white date wheel across all models, the black dial version will feature a black date wheel adding a much cleaner aesthetic. 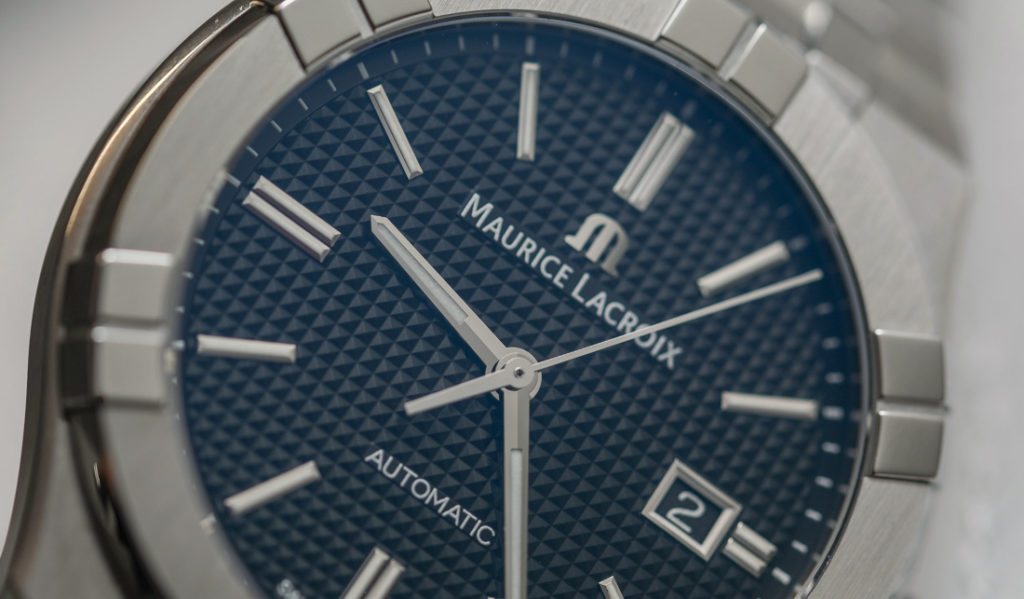 One of my favorite aspects of the Aikon Gents was the bracelet – in fact, it was one of the highest quality bracelets I’ve had in a watch under $1,000. The 5-link brushed steel bracelet seems to flawlessly flex and contour the wrist without being too thick or too thin. The slightly raised center links tended to be scratch magnets so it’s nice to see a bit of that shaved off of the Aikon Automatic. Because of the harsher lug taper, the flexibility of the bracelet sits more flat on the wrist. Overall, the ever-so-slight modern updates improve on an already fantastic bracelet. One downside: since it is an integrated bracelet, the options are limited to the bracelet or a brown, blue, or black leather strap – all solely available through Maurice Lacroix. It’s pretty standard within the luxury segment but will come as an inconvenience to those who would like a more spunky strap. The upside is that it does feature a quick-change system. 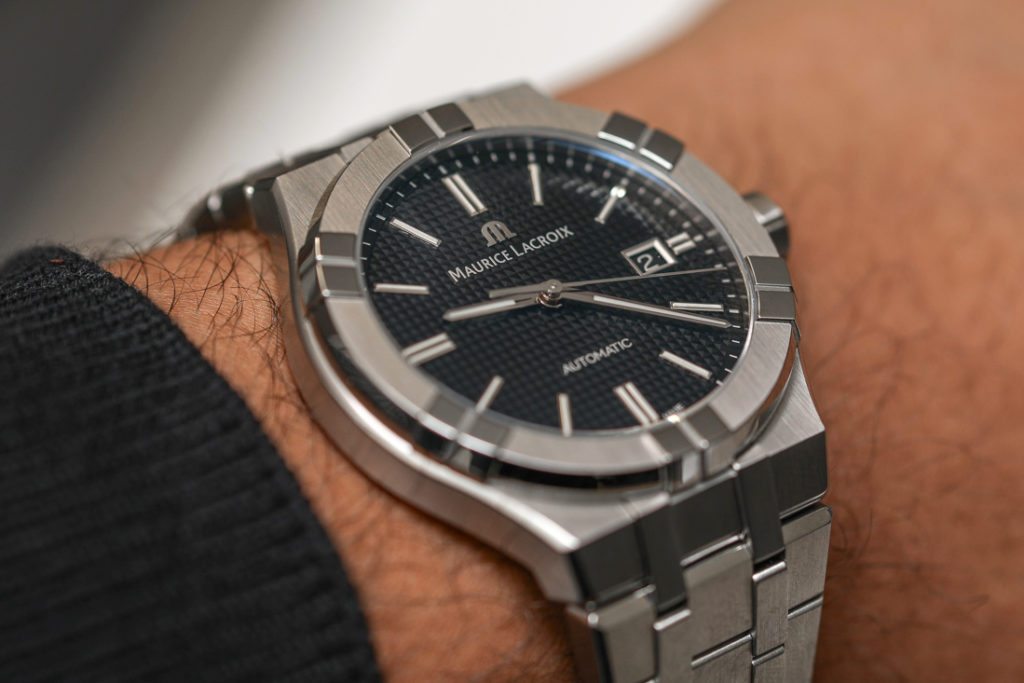 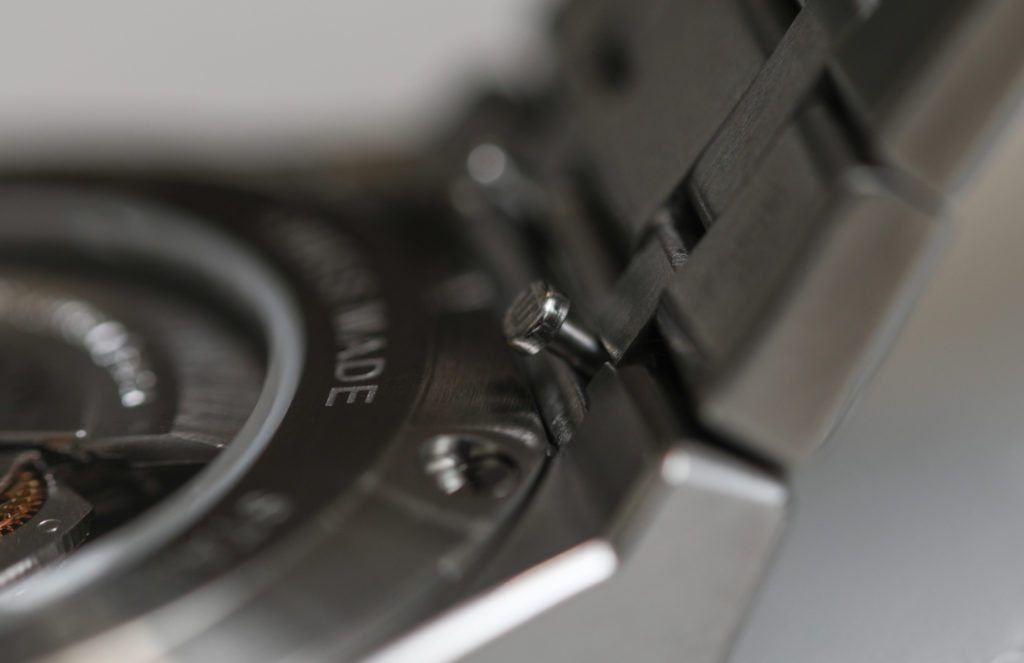 Moving on to the real draw of the watch, the movement. Inside of the Aikon Automatic 3-hander is Maurice Lacroix’s ML115 caliber. The ML115 is a modified and decorated SW200 base that was commonly found in the Pontos S divers. Visible through the sapphire caseback, it’s not the most attractive movement, but the decorations feature a nice Geneva Stripe pattern and perlage that dress it up a little and add a pleasing aesthetic to a relatively pedestrian movement. The ML115 beats at 4Hz and has a power reserve of 38 hours. While nothing fancy, it’s certainly a tried and true caliber that keeps the price down. 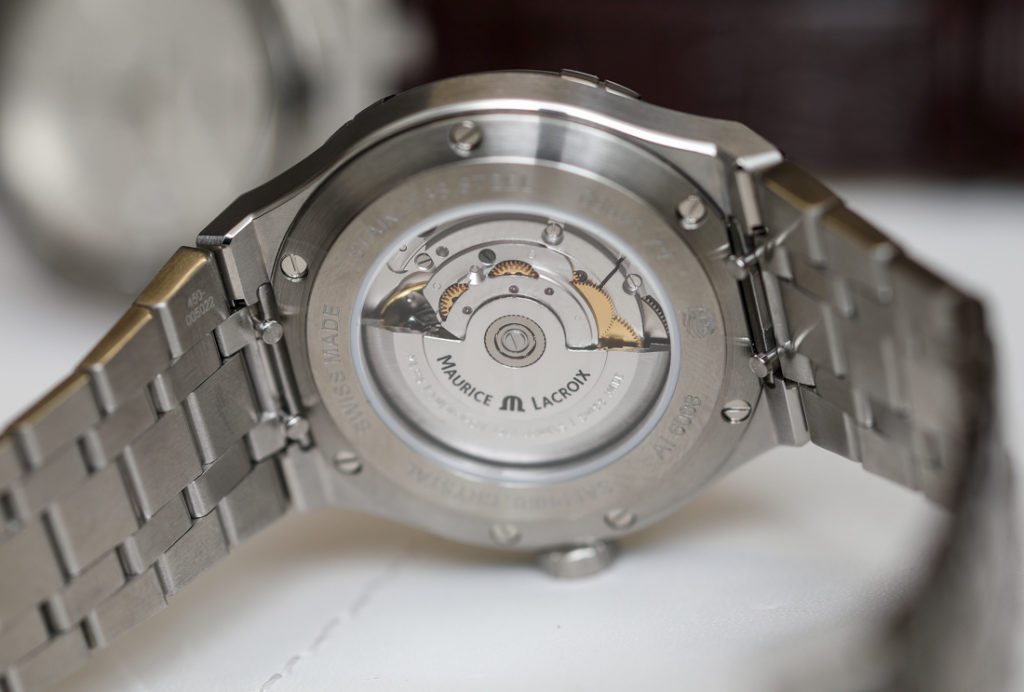 Then there is the value proposition. I’ve seen a lot of complaints about the use the SW200 instead of one of their more complicated calibers (AKA their “Masterpiece” movements). I would like to remind our readers that there is a large gap in pricing and that’s not what this model has historically tried to fill. They already feature the Aikon Skeleton Automatic that had the ML234 movement designed specifically for the Aikon, but offering them as a standard hinders the affordability and attainability of these models – in the case of the Aikon Skeleton Automatic, it’s over triple the price.

Overall, I’m a huge fan of the new Maurice Lacroix Aikon Automatic Collection. Between the three models, I find the black dial the most attractive. Funny enough, it’s the same design of the Aikon Gents in my watch box. The affordability of a high quality, well finished, and superbly comfortable steel sports watch is hard to beat. The Aikon Automatic 3-hander takes welcome upgrades to almost every facet of the Aikon Gents and presents an enticing option for enthusiasts in the market for an all-steel dress watch that’s reasonably attainable – even if an automatic has been long overdue. 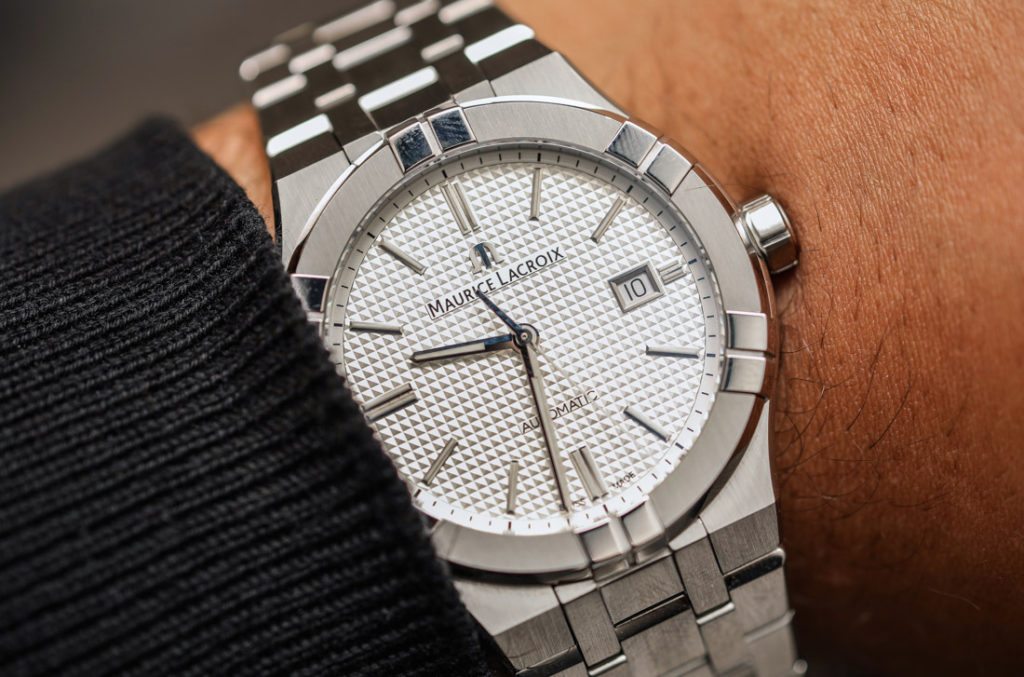 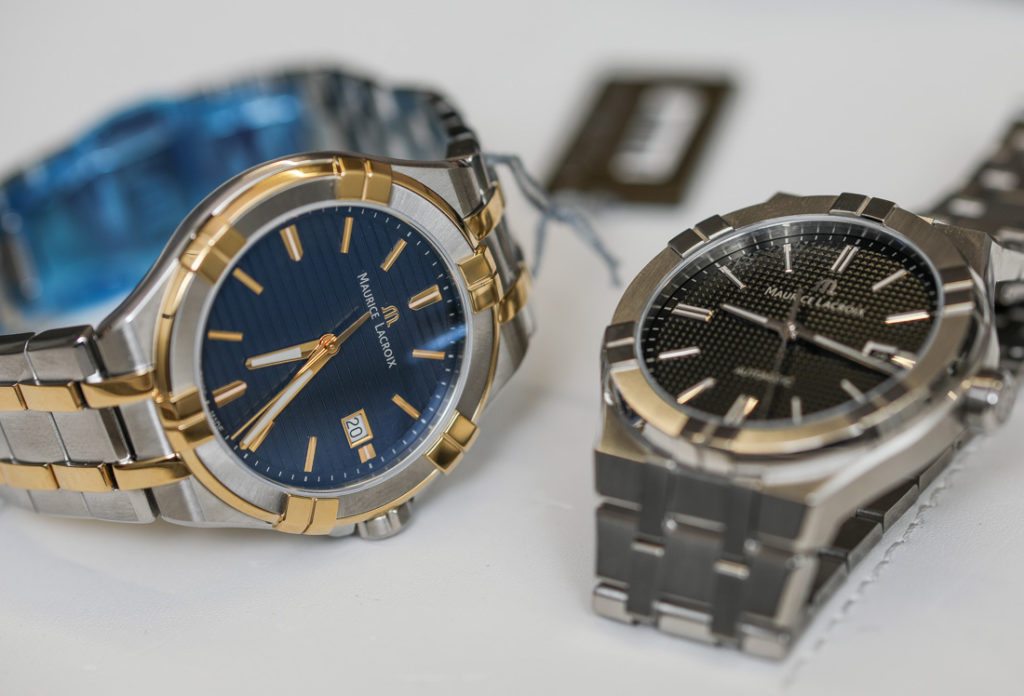 Price for the Maurice Lacroix Aikon Automatic will be $1,890 on leather and $1,990 on the steel bracelet. mauricelacroix.com