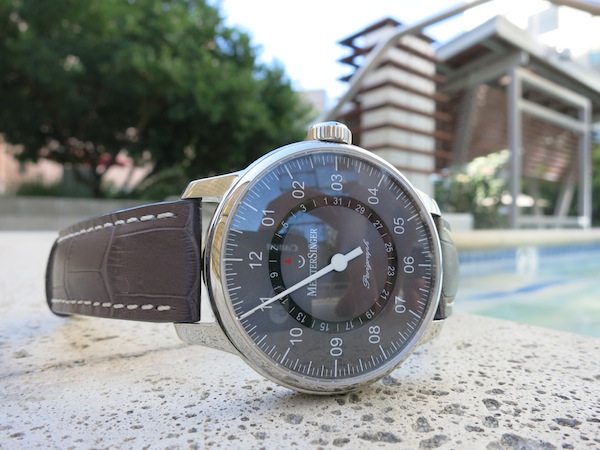 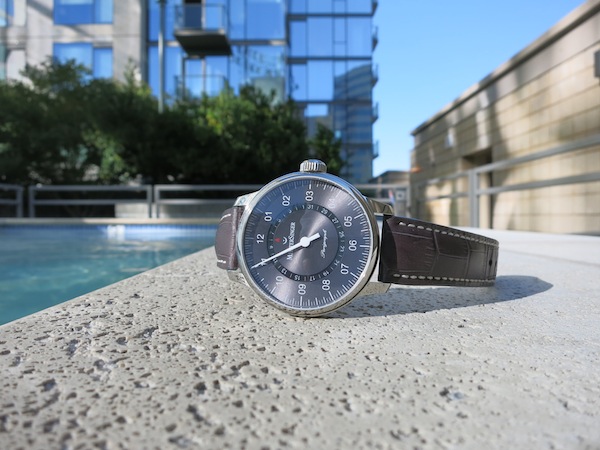 Mechanical watches often excel at one particular purpose or are designed to fit a particular set of activities.  Dive watches are (as the name implies) designed for water activities, chronographs – while generally useful – are designed with motor sports in mind, and GMT and world timers make for great traveling companions.

This is not surprising since if you look at the history of watches that define a particular segment of the watch market, you will see that they usually emerged with brands trying to provide the best watch for the activities in question.  A great example is the creation of the Rolex Submariner and Blancpain’s Fifty Fathoms in the early 50s as the ones that would define the diving watch segment.

So as a watch-nerd, we collect watches and wear them to match the intended activity.  So, a good question is: what watch would you wear when you want to relax or when taking a vacation?  Sure a diver would work fine, especially if you are intending to go into the pool or into the ocean.  Nevertheless, it’s interesting to ask, is there a watch more suited for vacationing?  a watch that while accomplishing its purpose can disappear and even make time slow down a bit.  After all, who wants vacation time to go by fast?  Well, I believe I found exactly such a watch: the MeisterSinger Perigraph.

The oldest known form of timekeeping are sundials.  In its simplest form, a graduated circle (or semi-circle) with a stick whose sun shadow indicates approximately the current time.  Such sundials go as far back as the Egyptian and Babylonian civilizations’ studies of astronomy (1500 B.C.), the Mayan civilization, the Chinese, and early European civilizations.  The Old Testament has a passage mentioning a sundial as the “dial of Ahaz” in Isaiah 38:8.  The simplicity of such timekeeping mechanisms evokes a period in human evolution where precise timing was less important than having some idea of where in the day the present time was.  While impractical for modern day to day activities, when vacationing, that’s exactly what one wants.

MeisterSinger is a German brand who intends to bring back such simpler times to the present.  Their lines of timepieces includes a series of flagship watch models with a single hand.  The Perigraph model reviewed here also includes a rotating date disk.  Since the disk only advances once per day, you don’t lose the overall effect of the single hand, yet gain a useful piece of information.

First the Perigraph model, while simple, is not small nor overly thin.  The 43mm polished stainless steel case seats at 10mm on the wrist.  Overall, it never feels small but also not overly large.  I would say it’s right sized for modern tastes.

The dial is the shining star for this model.  The dark gray anthracite is unique but works well with the long thin single white hand that extends all the way to the edge of the dial.  The markings are clear and precise.  Since there are no minutes nor seconds, it’s imperative that the markings be clear such that one can have, at a glance an idea of the time, even if the precision is of five minutes. 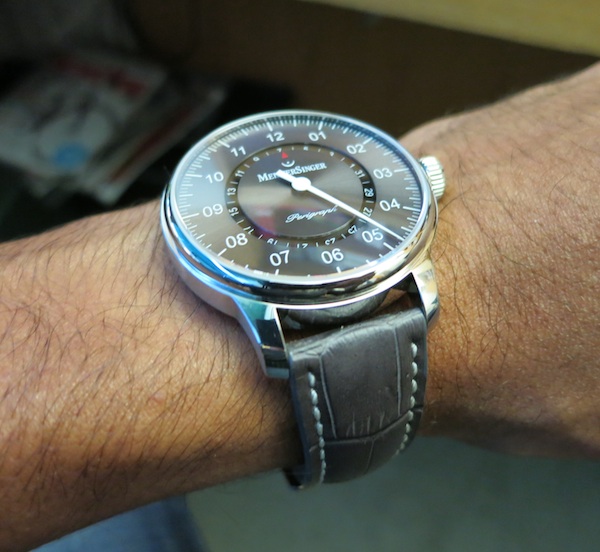 MeisterSinger accomplishes this by having all 12 hours marked with a legible sans serif font and pre-pending 0 for the single digit since that allows the markings around the dial to be symmetrical and pleasing to the eye.  Between two hours you get a long marker index for the half hour, smaller ones for the 15 and 45 minutes and then even smaller ones for the 5 minute increments.

Since, as mentioned, the single hand is long and thin, reading which marker the hand is closest to, is relatively easy. Quickly calculating the time when not at the half takes a bit of getting used to, however, after using the watch for a day or so, this was a non-issue and became somewhat second nature.

Part of the legibility is obtained due to the high contrast between the white hand and markers with the anthracite dial.  The current date is shown at the 12 o’clock position by the inner rotating disk and with a subtle small red arrow pointing to the date.  The date disk shows Roman numerals for the odd dates and a index for the even dates.  The whole thing is well thought out, legible, and unique.

Completing the case is a slightly domed sapphire crystal that is treated for anti-reflection.  Due to the large dial and the fact that the bezel is very thin, the curved crystal creates a loupe effect at angles that helps with seeing which index the hand is closest to.