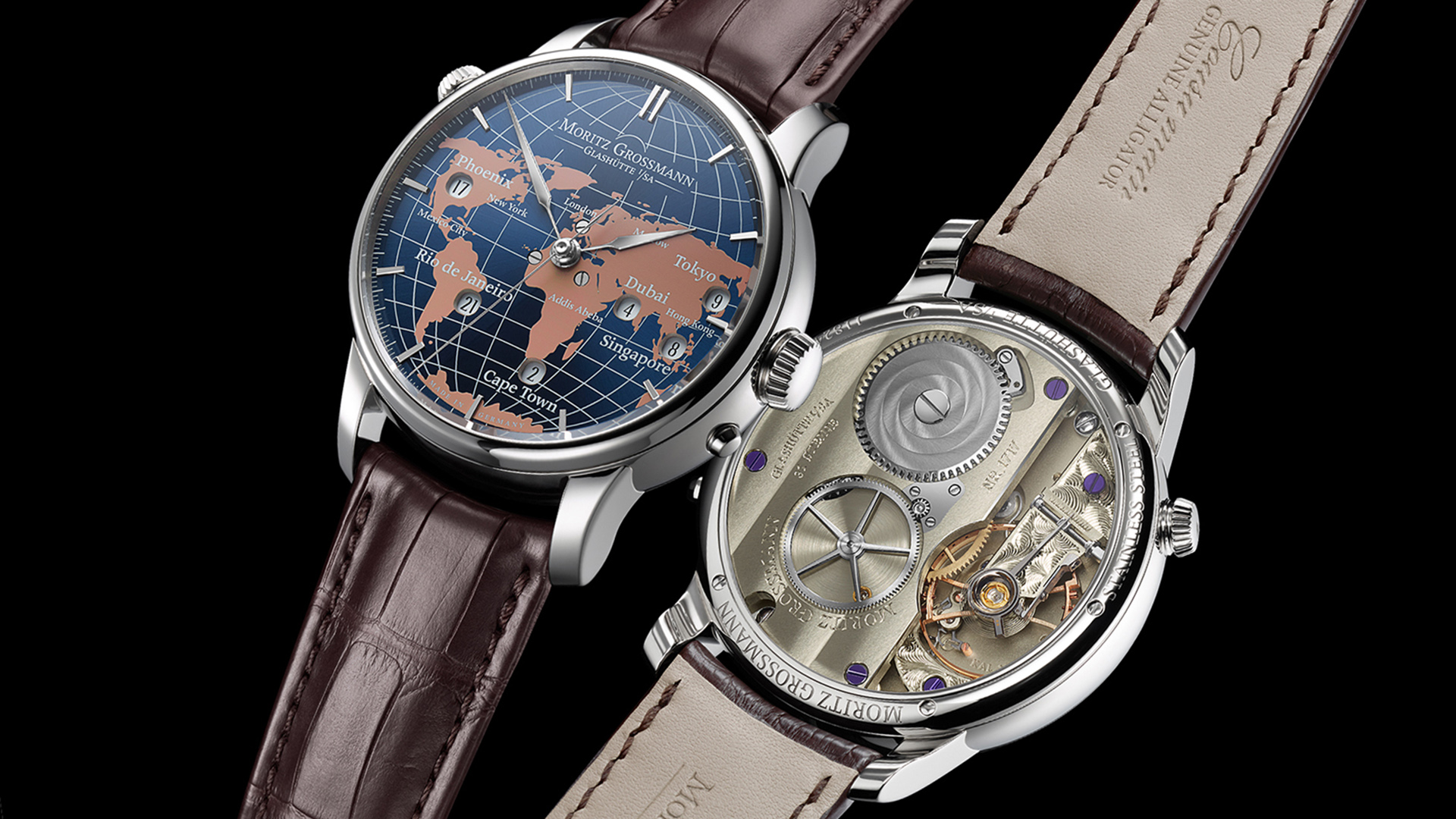 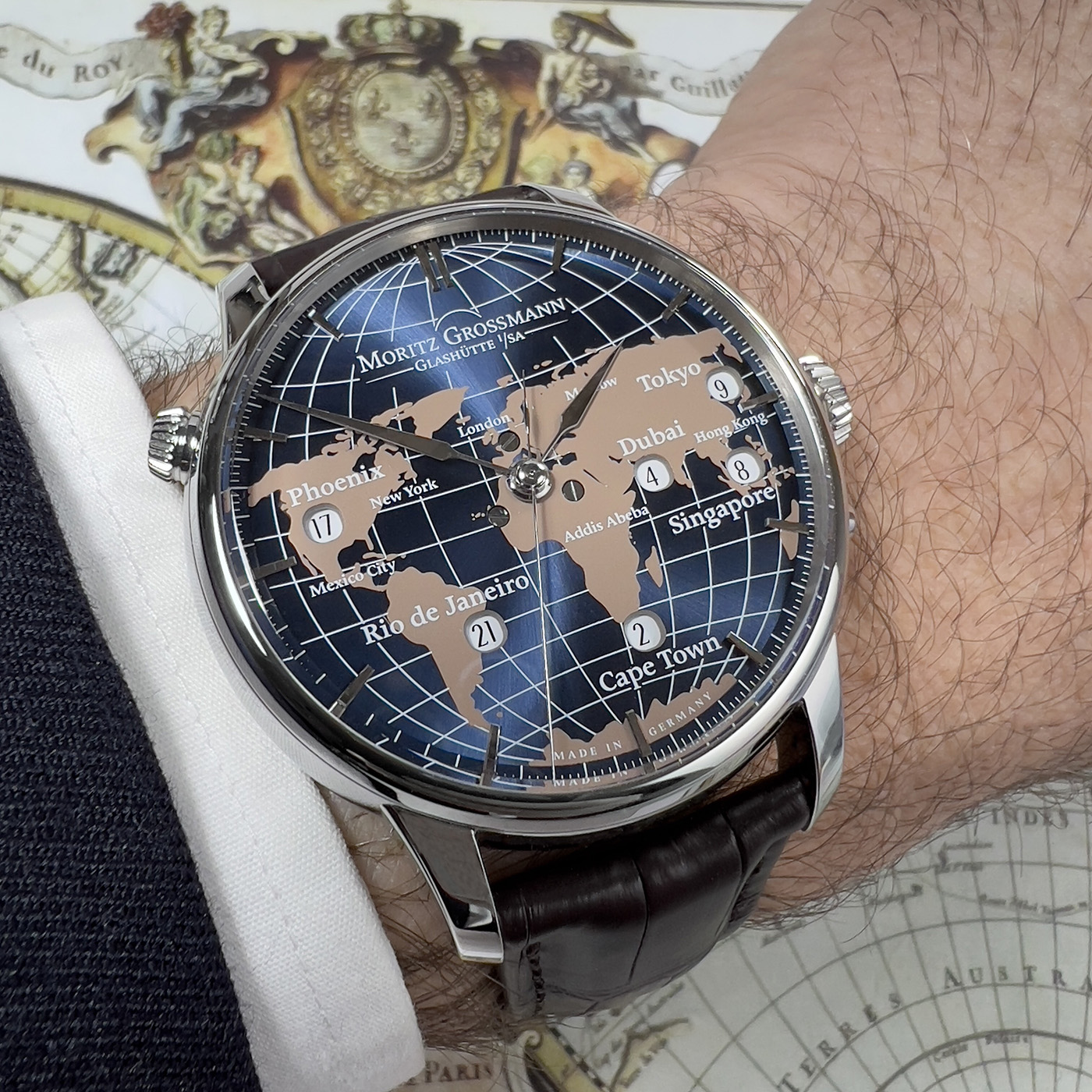 When it comes to watchmaking complications, few others can match the visual variety of the world timer. Over the years, this globetrotting complication has taken forms ranging from a city ring working in conjunction with a GMT hand to full-blown maps of the world, and has invited some of the most intricate and creative dial treatments in the luxury watch industry. German marque Moritz Grossmann’s latest release is a perfect example of this world timer creativity at work, integrating seven time zones with six jumping hours mechanisms into a cleanly executed take on the classic world map dial motif. The new Moritz Grossmann Universalzeit blends impressive horological complexity with a handsome and deeply traditional design, creating a uniquely attractive take on the world timer in the process. 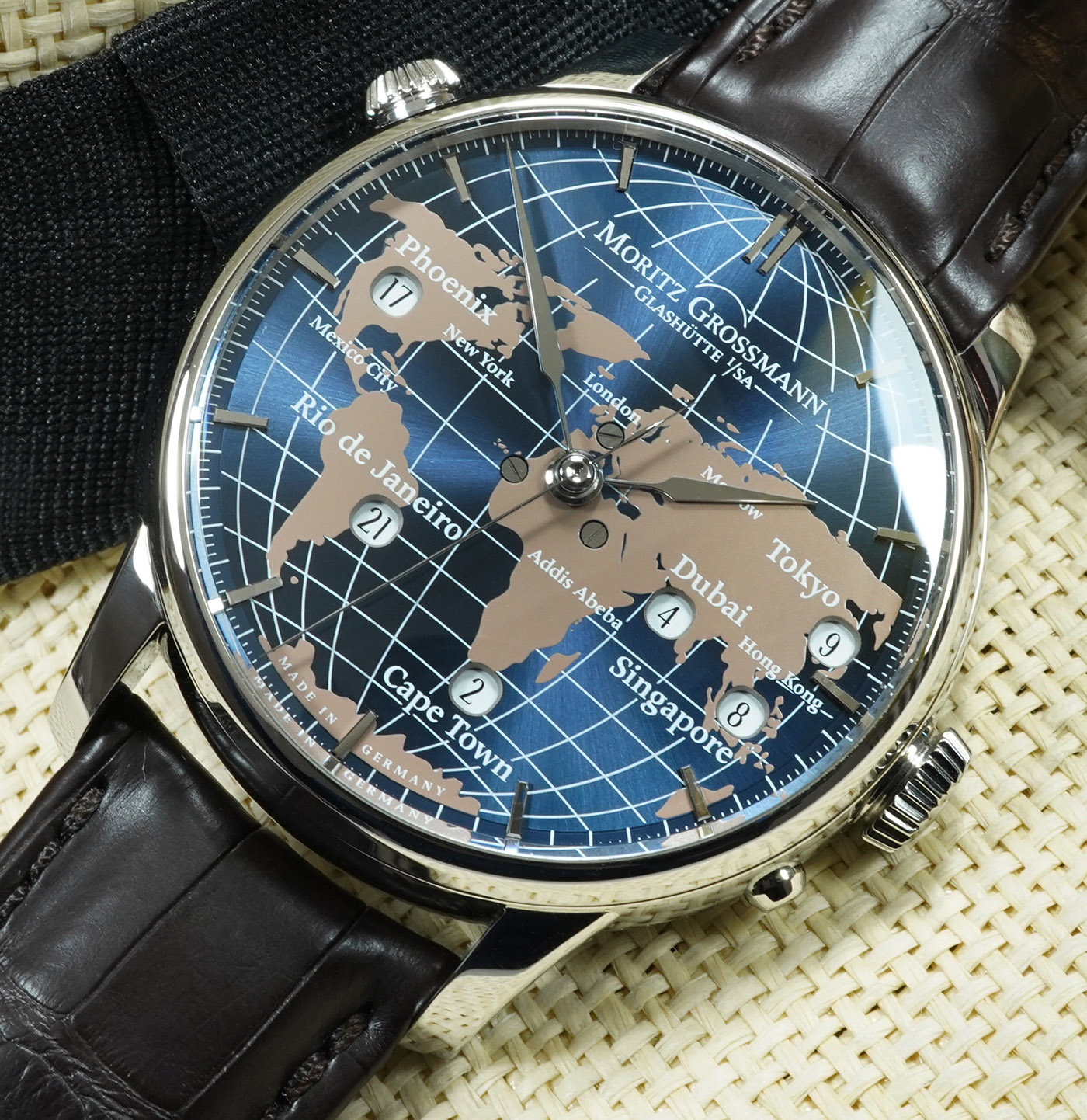 Although on the larger side at 44.5mm-wide, the stainless steel case of the Moritz Grossmann Universalzeit takes a clean and classical stylistic approach. The fully mirror polished main case body is elegant and pared back in initial images, with simple downturned lugs, a rounded case side profile, and a handsomely narrow smooth bezel. The only real touch of visual complexity here comes through the twin crowns and the undersized 4 o’clock bullet pusher. While the tapering crown at 3 o’clock handles the usual functions of winding and time setting, the matching 10 o’clock crown allows for quick and easy adjustment of the hour hand. The 4 o’clock pusher is a Moritz Grossmann staple, working as a separate hacking function to allow for more precise time setting by stopping and starting the movement. Around back, Moritz Grossmann dedicates nearly the entire caseback to a sapphire display window presenting as much of the in-house movement as possible. While the brand does not include a water resistance rating for the Universalzeit, it’s safe to assume this model is unsuitable for diving. 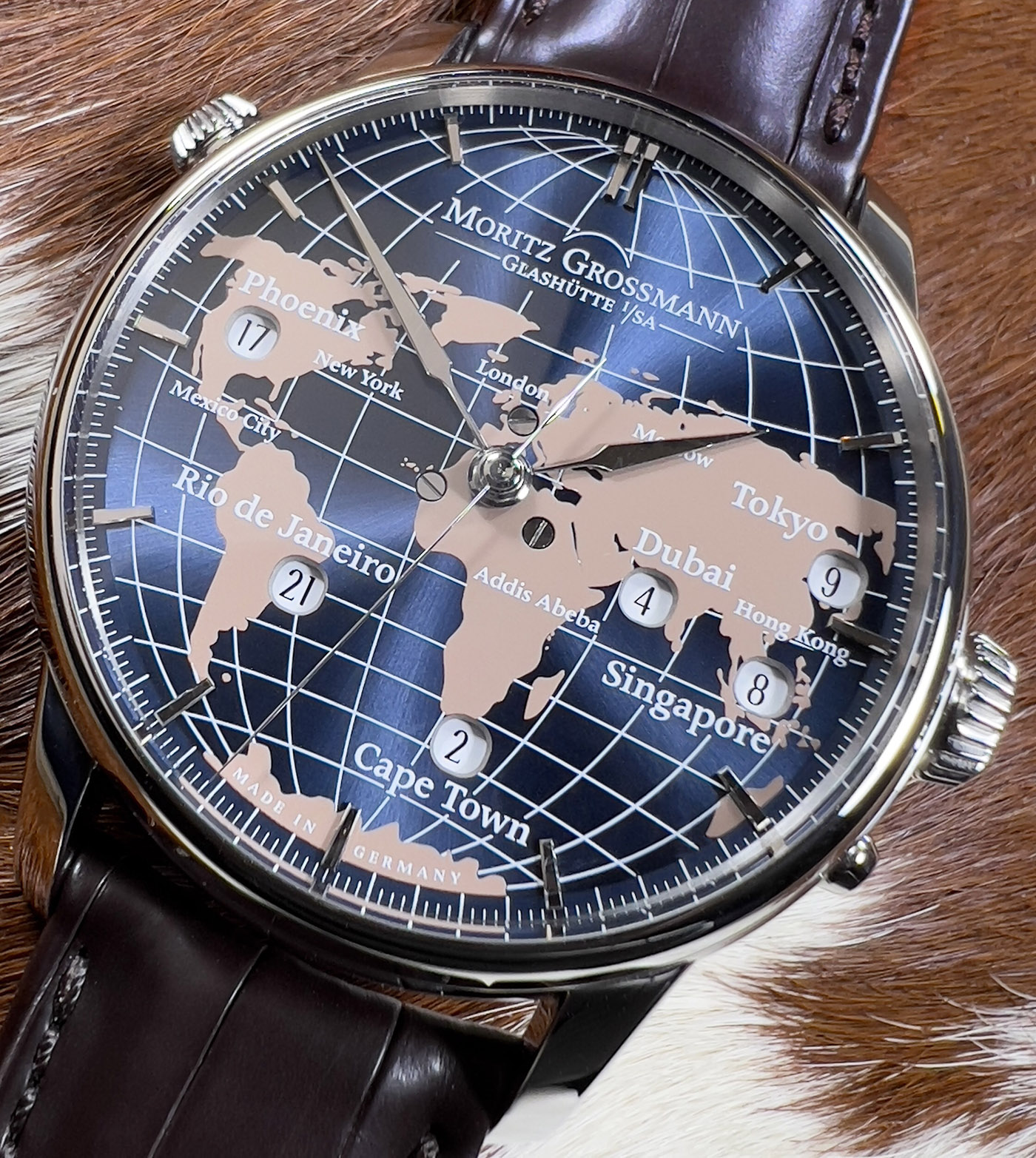 While the core concept behind the sextet of jumping hours displays on the Moritz Grossmann Universalzeit’s dial is intuitive, many of the smaller design choices may seem confusing at first glance. Most of the cities selected for hours displays on the cleanly executed world map appear like natural choices in images – Tokyo, Singapore, Dubai, and Rio de Janeiro are all international hubs and regular inclusions in world timer designs. The final two cities on the list, Cape Town and especially Phoenix, are decidedly more left-field. Cape Town lies in the same time zone as more populous cities including Cairo, while the choice of Phoenix as the lone city in the United States appears strange even when restricted to its Mountain Standard time zone. What all six selected cities have in common, however, is that none of them use daylight saving time. As this ensures the time in each city remains constant year-round, this massively simplifies the complication necessary to keep the watch accurate. The Universalzeit’s other potentially puzzling dial design choice is the use of perspective for its map of the world. The decision to place all landmasses on the map below the 10 o’clock to 2 o’clock line is likely to be a divisive one, as it gives the Arctic Ocean a larger area in images than the Atlantic Ocean and Pacific Ocean combined. This stylistic decision is more than likely dictated by movement packaging concerns, however. Perspective choices aside, this is a remarkably attractive dial design in initial images. Compared to many world time dial renditions, the uniform creamy tan tone used for the Universalzeit’s continents is handsomely simple in images, and nicely complements the high-gloss navy blue sunburst finish used for the oceans. Moritz Grossmann wisely keeps the dial hardware to a minimum against this complex backdrop, with small polished rectangular indices and a tapering spear handset. 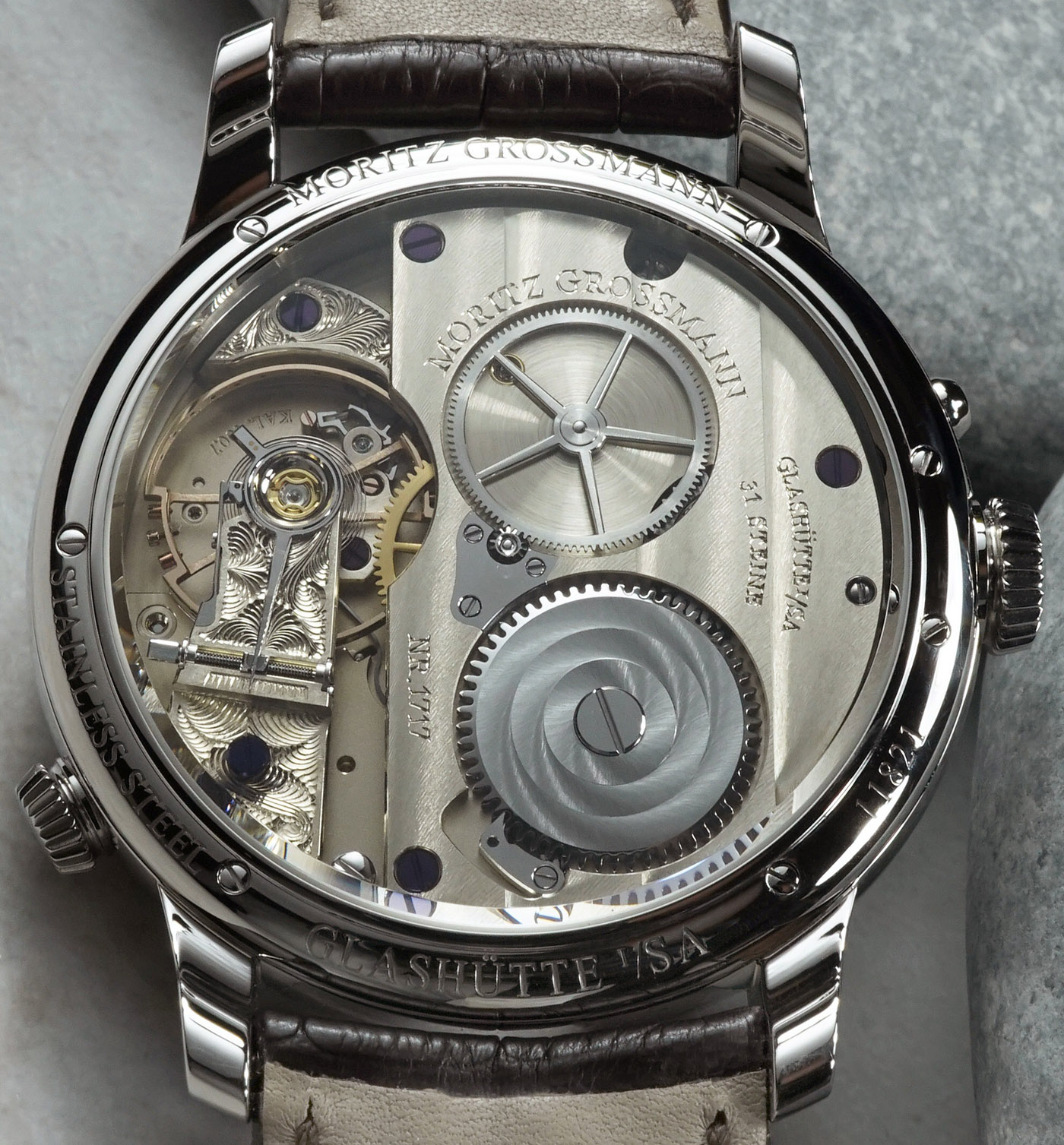 Inside the Moritz Grossmann Universalzeit beats the in-house Calibre 100.7 handwound world timer movement. The finishing on this movement is classically Teutonic, with a broad striped two-thirds plate in warm German silver topped by a three-band snailed ratchet wheel. The most eye-catching element by far in images, however, is the hand-engraved filigree balance cock. Moritz Grossmann’s signature purple screws complement the pale gold tones of the German silver elements strikingly in images, completing this stunning traditional design. With that said, the simplicity of the layout through the caseback belies the Calibre 100.7’s complexity, which sports six separate jumping hours displays along with a unique Grossmann balance. Power reserve for the Calibre 100.7 stands at 42 hours with a steady 18,000 bph beat rate. Moritz Grossmann finishes the Universalzeit with an equally classical alligator leather strap in deep cocoa brown. 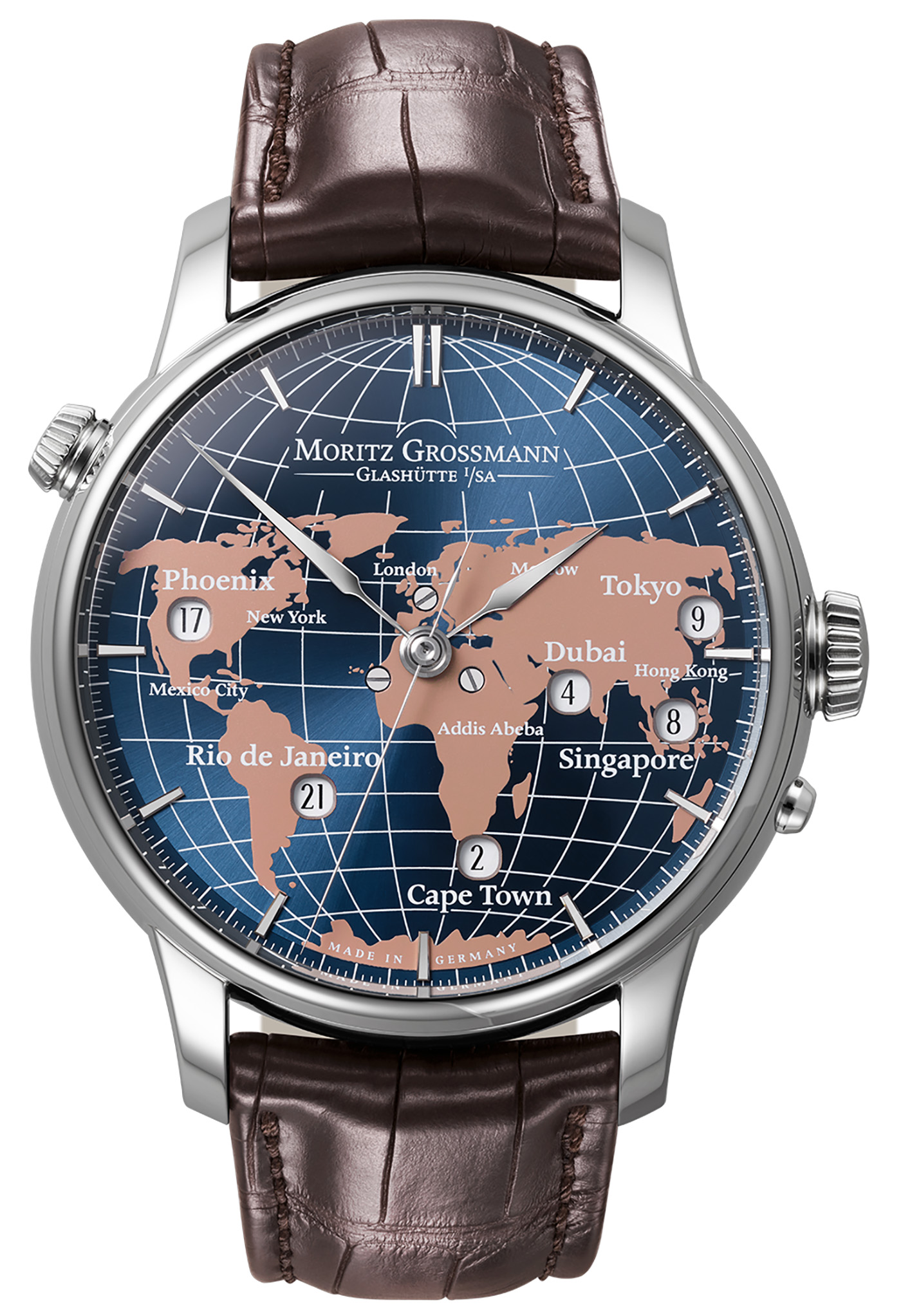 With a clever, graphic approach to the highly variable world time complication paired to a handsome and classically Germanic design, the Moritz Grossmann Universalzeit makes its mark as one of the most striking world time offerings in the current luxury watch industry. The Moritz Grossmann Universalzeit is available now through authorized dealers. MSRP for this model stands at €42,000 as of press time. For more details, please visit the brand’s website.