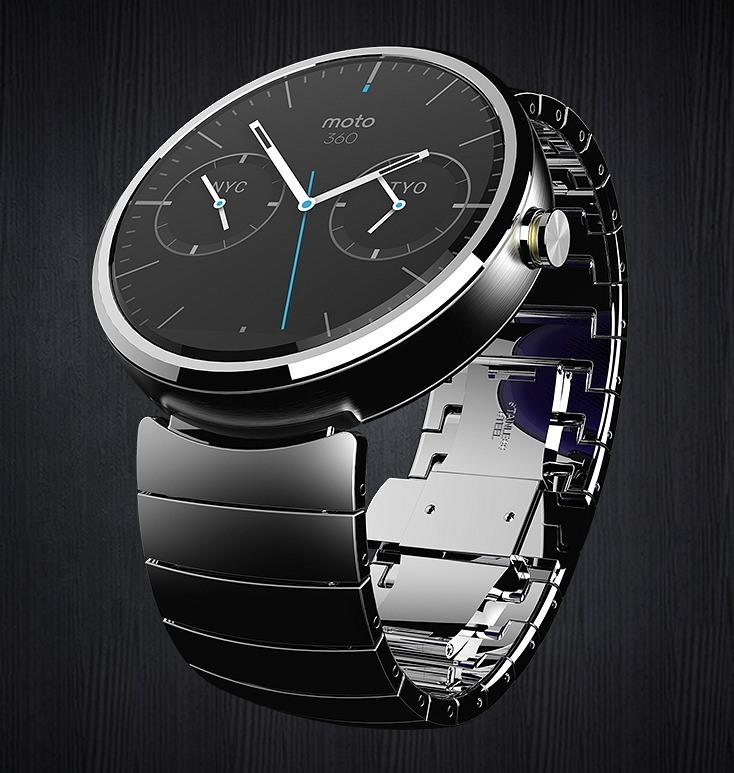 Well everyone, Google is officially in the smartwatch business with the Motorola Moto 360 and the new Android Wear operating system. Last year, the men and women from Mountain View announced that a smartphone-oriented operating system was being developed specifically for smartwatches after rumors were being thrown around for quite some time. The OS will be called “Android-Wear” and it was now announced at the same time Google-owned Motorola debuted the upcoming Moto 360 Smartwatch. Likely to beat the release of an Apple iWatch device, the Moto 360 will be available for sale in 2014 and for many is the smartwatch they have been waiting for. This comes about a year after many industry insiders even doubted the future viability of the smartwatch industry. About 15 months ago, I knew this was inevitable and even proclaimed as much in a post discussing what an iWatch would be like.

There are really two separate topics that need to be discussed in this article. First are details about the Moto 360 smartwatch itself, and secondly (which is perhaps more important), is the new Android Wear operating system. Google’s Android was originally developed as an open operating system for developers to use in mobile devices such as phones and tablets. Some developers have tried to develop smartwatches with versions of Android, but it doesn’t really work given the resources and screen size necessary for the system and interface. Some time ago, Google realized that a distinct version of Android would be necessary for the unique challenges of a wearable device, so development has been ongoing for over a year and has now been made public.

Android Wear isn’t just for smartwatches, but will be a base for all future wearables, including Google Glass and other yet-to-be-imagined devices. Though, for the time being, I have a feeling most devices that will use the OS will be smartwatches. Like what Google did with Android for smartphones, Google is going to do with Android Wear for smartwatches, in maintaining that it is open for all software developers to use with an openly available SDK (software developers kit). This will allow Android Wear to likely become the dominant smartwatch and wearable device operating system.

Google has chosen to debut Android Wear in its own device, as Google currently owns Motorola, but expect to see the operating system in a range of products coming in 2014. Google has already announced partnerships with Fossil, Samsung, Intel, HTC, Asus, LG, and more. As you can see, Fossil is among the brands that will be working on smartwatches (which actually isn’t new for them, but they have yet to find success with a smartwatch). I expect additional traditional watch makers to develop their own smartwatch hardware to run Google Wear in the near future. I wonder who the first Swiss watch brand will be. 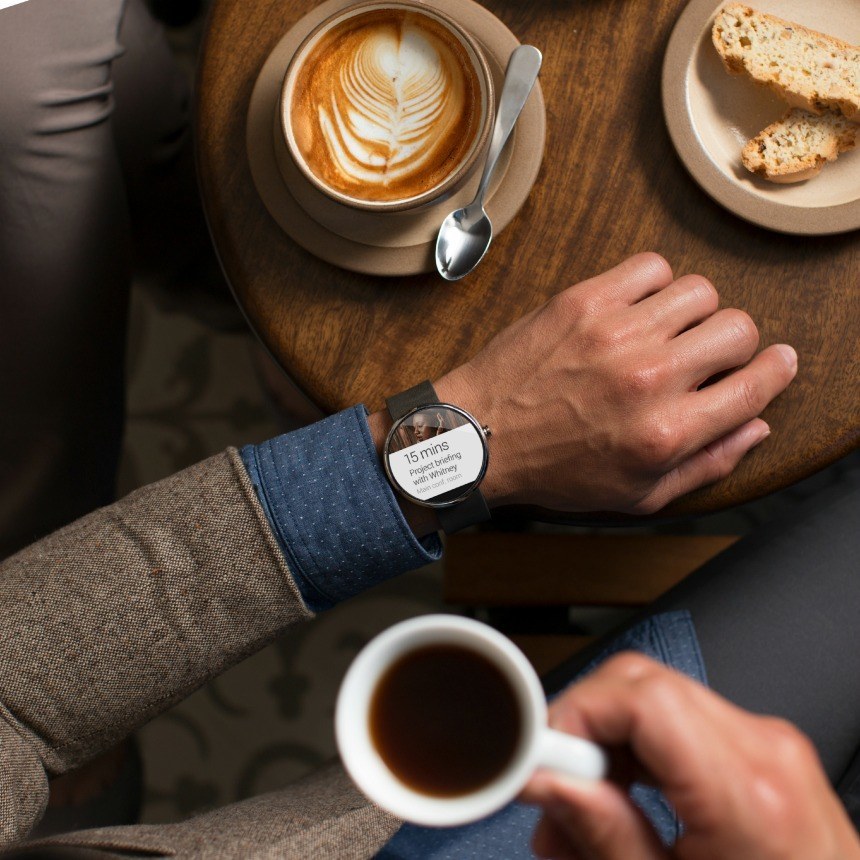 Now that we understand Google’s intent behind Android Wear, it is a good idea to learn what it will be like. Google has released a few interesting videos showing off what it will be like to receive information from a smartwatch as well as how to interact with it. A major issue with smartwatches is that unlike a smartphone or other device, there is really no easy way to input data or issue commands. The screen is too small to type on, and the case can only have so many buttons and pushers. So, when it comes down to it the logical input method is simply speaking to it. Given that reality, Google has designed the Android Wear experience to revolve around voice commands. When Google Glass was released, people became familiar with the “OK Google” voice command that got the device’s attention, but the ability of Android Wear will go beyond that.

The idea, according to Google, is for Android Wear to respond to natural language in response to notifications and to input information. Speech recognition has become good enough so that assuming the device can hear you, it can understand your commands in plain English (and other languages).  The user’s voice will become a principal means of using a Android Wear’s interface. More than likely, the device will use an internal microphone to transmit the voice recording to a Google server via the Internet for recognition and response of the voice command. I do not believe that the individual smartwatch devices themselves contain the processing power necessary to receive, decode, and act on voice commands. That does inherently mean that without an Internet connection, the functionality of an Android Wear-powered smartwatch will be limited – but that is to be expected of this and other future devices for the time being.

This also implies that Android Wear devices will link to local WiFi access or connected smartphones. Google has developed a lot of tools that help make a “connected life” more convenient, but for now it is the destiny of a smartwatch to remain a (perhaps vital, yet complementary) accessory to a smartphone.

Built For A Square Or Round Screen

Perhaps one of the most revolutionary elements of Android Wear is that it is designed to be used with a device that has both a square (or rectangular) or round screen. The Moto 360 will be the first major smartwatch product released with a round-versus-squared screen. According to Google, this is a major step not in the sophistication of the smartwatch, but in the ability of a smartwatch device to conform to what consumers have been preferring in wrist watches for generations. What Google has understood, more than likely due to the complaints of pundits such as myself, is that people take the devices they wear very seriously. What Apple got right with the iPhone was creating a device that people were happy to be seen with. For all its ergonomic flaws, the iPhone is an attractive device that even the most fashion-conscious people are happy to be seen stuck to their face or palm all the time. In a sense, the iPhone is the first modern piece of high-technology that has become fashionably acceptable.

Smartwatches will enter the realm of wrist watches where style and design is almost everything. The majority of smartwatches currently available suffer from being less than attractive. Some, like the 2014 Pebble Steel e-ink smartwatch, are much improved over their previous versions- though they still don’t quite have what it takes to earn mainstream adoption. Google seems to have understood this issue from the start, so the decision to ensure Android Wear works on round screens is an important step in the ability for smartwatch makers to produce devices meant for general, versus early adopter use.

Given that current smartwatch technology is linked to a data connection in another device most of the time, they will for the foreseeable future act like a second, more convenient screen to your phone or computer. A goal of many smartwatch developers is to promote their products as a more convenient way of checking to see if they have missed calls, new messages, etc… Android Wear is focused precisely on this, but offering useful and logical notifications (many of which can be responded to with voice commands). Notifications will not only be interactive, but will also make it clear which application they are related to. Google envisions that users will receive many notifications and have developed means of both stacking notifications like cards and making it easy to sort through them. We have yet to see this in action, but it will be interesting to see how Google has addressed this with core feature of smartwatch utility.

Over the last year, it has become clear that smartwatches make excellent activity sensors and fitness trackers. Android Wear assumes that many devices will have one or more sensors that it will have to interact with and monitor on a regular basis. I assume that to some degree most smartwatches will become activity sensors; able to track everything from the distance someone moves in a day, to their sleep cycles. More sophisticated models will follow with convenient heart rate monitors and other interesting sensors that when used properly can help people make useful decisions about their health and fitness on a real-time basis. 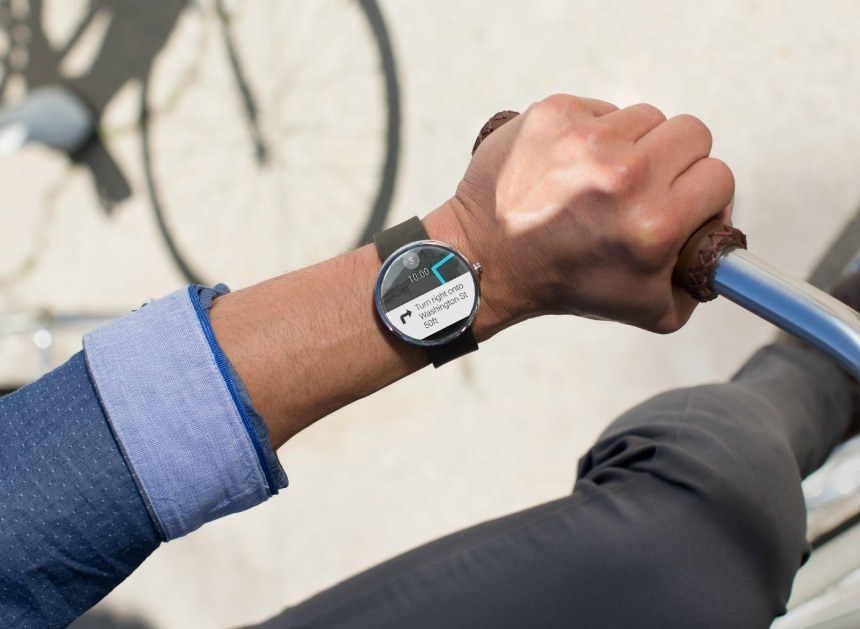 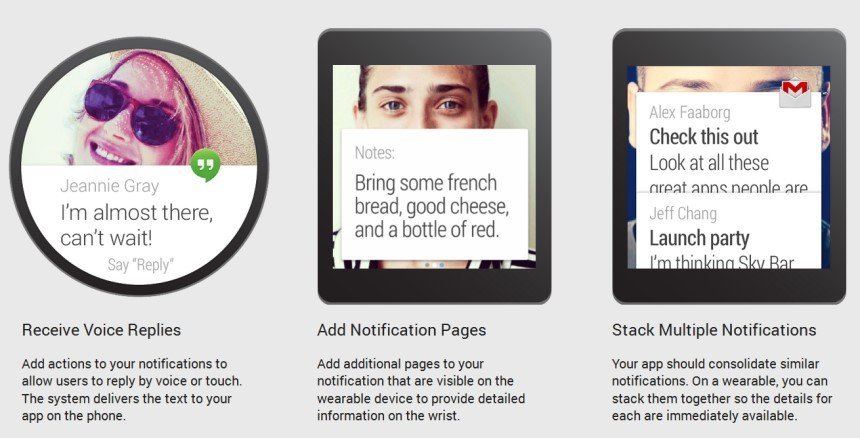 Moto 360 Smartwatch Is For The Mainstream

We are a few months away from a retail version of the Motorola Moto 360 smartwatch being available, so a lot of information is not yet available. In particular, we do not know how much battery life it will have, how effective the microphone or general connectivity is, or how well it connects with your phone. These are all issues that will be determined in good time but are extremely important. I say this because in my experience–as well as that of other aBlogtoWatch writers–smartwatches often fail not in design, but in a poor ability to connect to phones. One reason that people are so hopeful about an Apple iWatch is that because Apple devices work within a closed software ecosystem, it is hoped that an iWatch will flawlessly connect with iPhones, iPads, and other devices.

Google is no doubt aware of these issues and would not have released news about the Moto 360 or Android Wear if they were not at least mostly satisfied with the performance. Of course, to a large degree it is up to hardware and third-party software developers to help optimize the relationship between smartwatch and phone. Google or Motorola has thus far not specifically discussed the connectivity of the Moto 360, but it will likely use some version of Bluetooth. Personally, we look forward to a Bluetooth successor as I have been mostly disappointed with Bluetooth performance for years now. 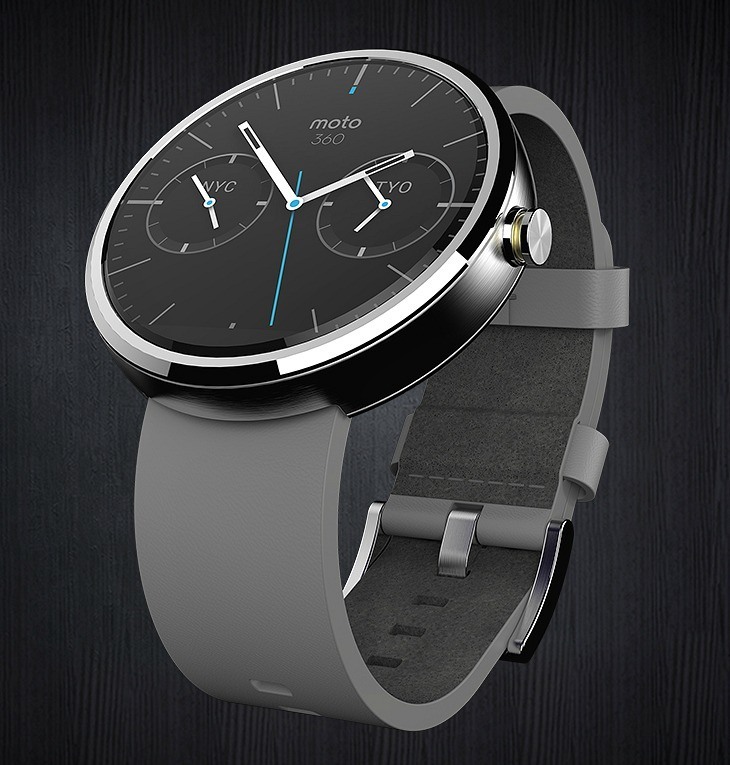 Specific details on the construction of the Moto 360 are also scant, but we know that Motorola and Google wanted to create a product that traditional watch lovers and the mainstream consumer would want to wear. They are very open about the fact that in designing the Moto 360 they looked at traditional wrist watches from the last 100 years or so. This, for example, is why it was important for them to produce a round, versus square, case design. As such, the Moto 360 will come in a round metal case – that will likely be available in a few finishes. Motorola has released pictures of the Moto 360 both on a leather strap as well as on a steel metal bracelet.

I have to admit that it looks pretty good. It, for sure, is a device that I would not mind wearing, and that is coming from a technology lover that has not found a ton of love for many of the currently available smartwatch offerings. Motorola has the benefit of being part of Google so the product engineers were able to work directly with the Android Wear software development team in creating a device specially tailored to the new system. Motorola is changing hands soon, from Google to Lenovo, but the development of this product began while under Google’s ownership. Though it is important to remember that the openness of Android Wear will make it so that Motorola Moto 360 products will be a mere member of a larger class of Android Wear-powered wearable devices.

So when can you get one? The good news is, not too long from now. Motorola and Google promise that the Moto 360 will be commercially available in the Summer of 2014, with additional details coming soon. Further, the Android Wear OS will be available for developers before that.