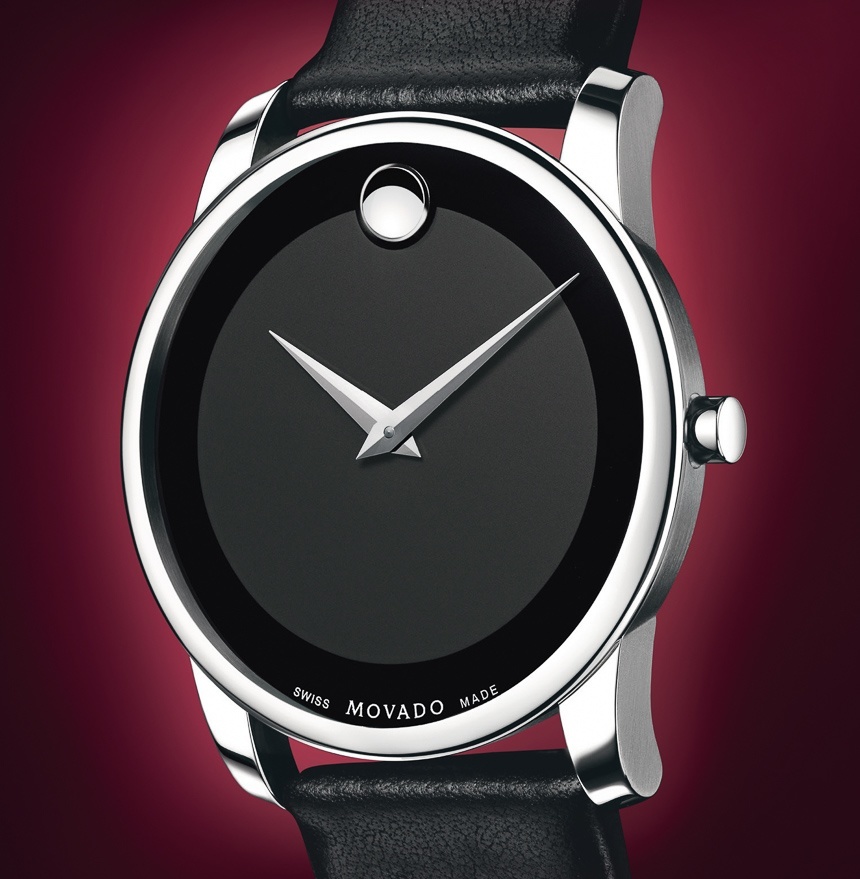 Having said that, none of the more experimental, modern, or utilitarian watches Movado produced that were inspired by the original Movado Museum Dial felt as complete or successful as the original design concept created by the American Jewish-Russian immigrant Nathan George Horwitt. With the Movado Museum Dial Classic, we see a relatively pure return to the core theme that made these watches – which experienced huge popularity in the 1990s – as appealing as they were. Is the watch world ready for a return of the Movado Museum Dial watch? Perhaps it is wise to first look at some the the history behind it. 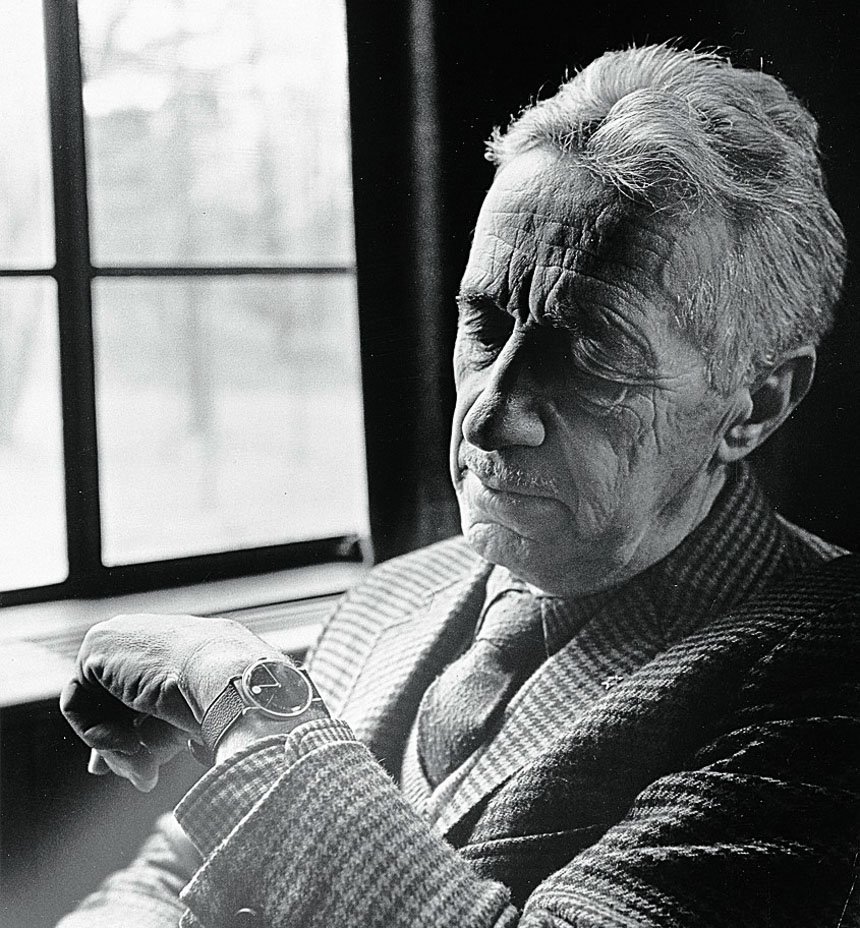 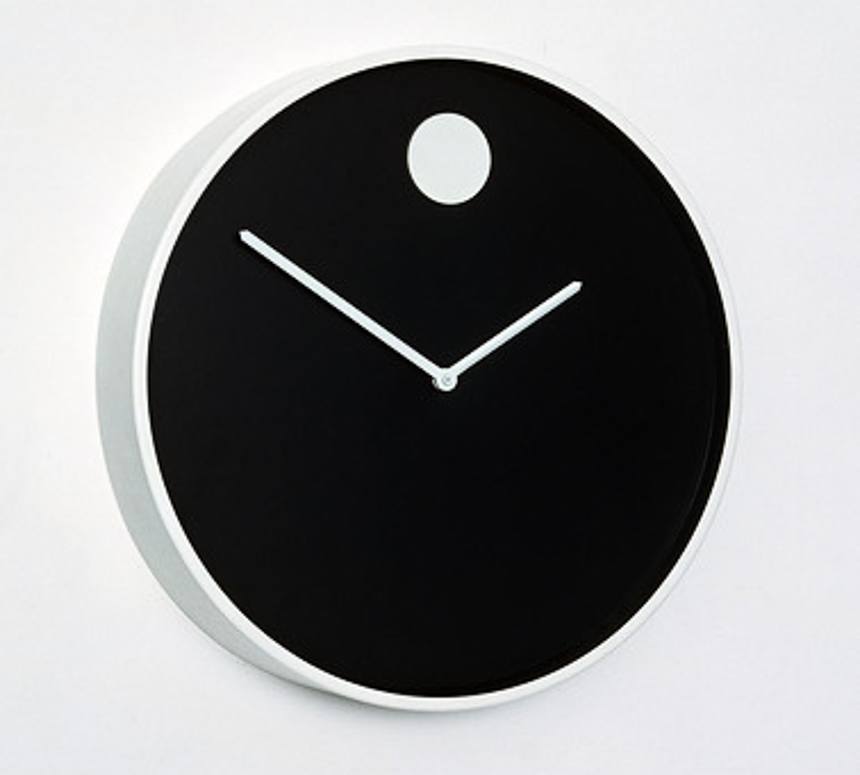 Like most design success stories, the tale behind the Movado Museum Dial watch was not particularly glorious for Nathan George Horwitt himself. A deeply prolific designer, Horwitt spend most of his professional life producing designs that he attempted to sell to major companies. This was exactly the case with what eventually became known as the Movado Museum dial watch (and clock).

History knows that the original Museum Dial watch was initially created by Horwitt in 1947, and within a year, the first example was produced as a timepiece – however, not with Horwitt’s permission. This is where the history gets a little bit fuzzy and where the difficulty for Horwitt began with the work that he is today the most well known for. Horwitt apparently shopped the clock and watch design around to various firms, but he wasn’t finding a lot of interest. At that time, as now among watch lovers, the idea of having a watch dial with almost no markers was controversial and frowned upon by many who saw the concept as being a lot of form over function.

Nevertheless, it seems as though then Zenith Movado (an American company) produced unofficial Museum Dial watches without permission, credit, or compensation to Nathan George Horwitt. The records I’ve found don’t all agree on when this started and whether these unofficial watches started being produced in the late 1940s or not until the later 1950s. Whenever it began, so started a long legal battle and difficulty for Horwitt to benefit from his design. Furthermore, the “Museum Dial” name did not actually come until later. 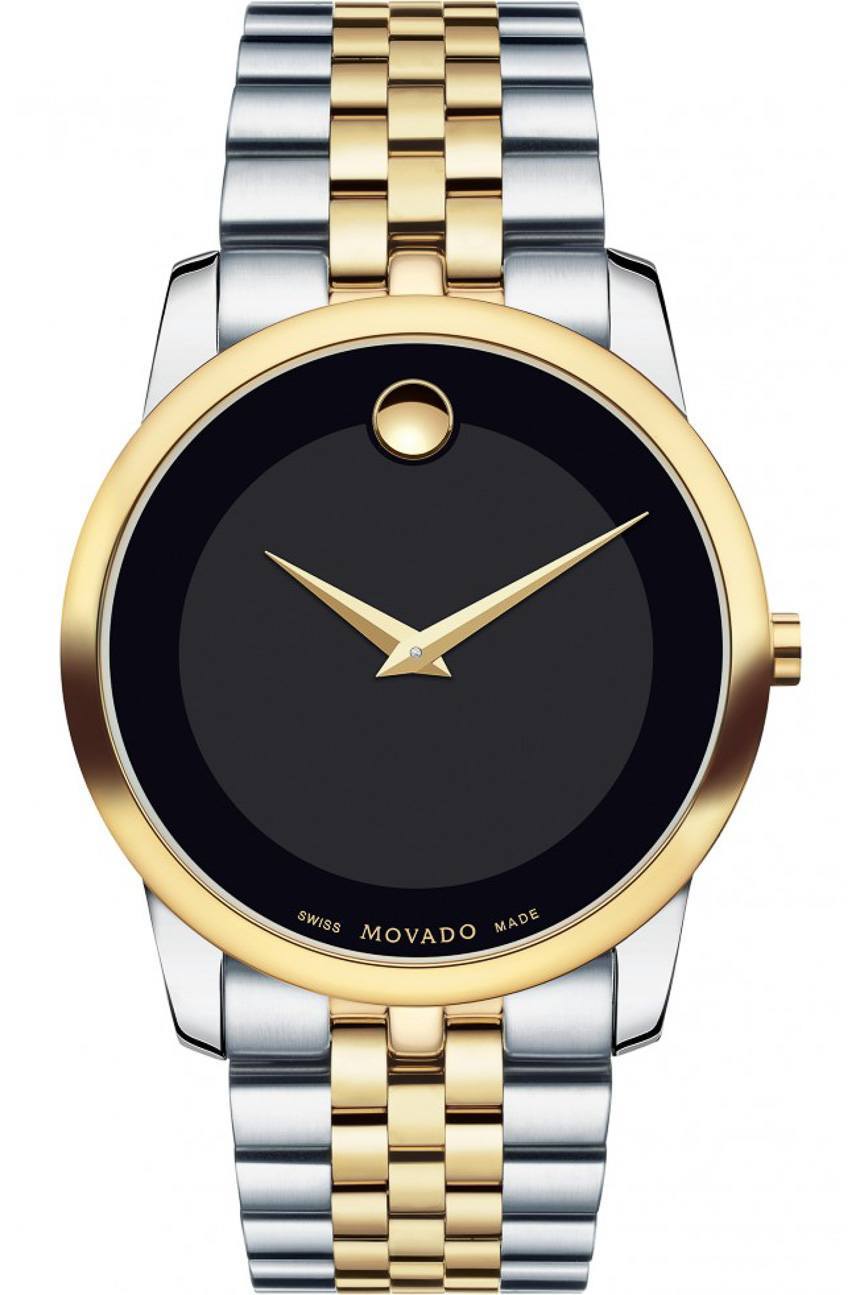 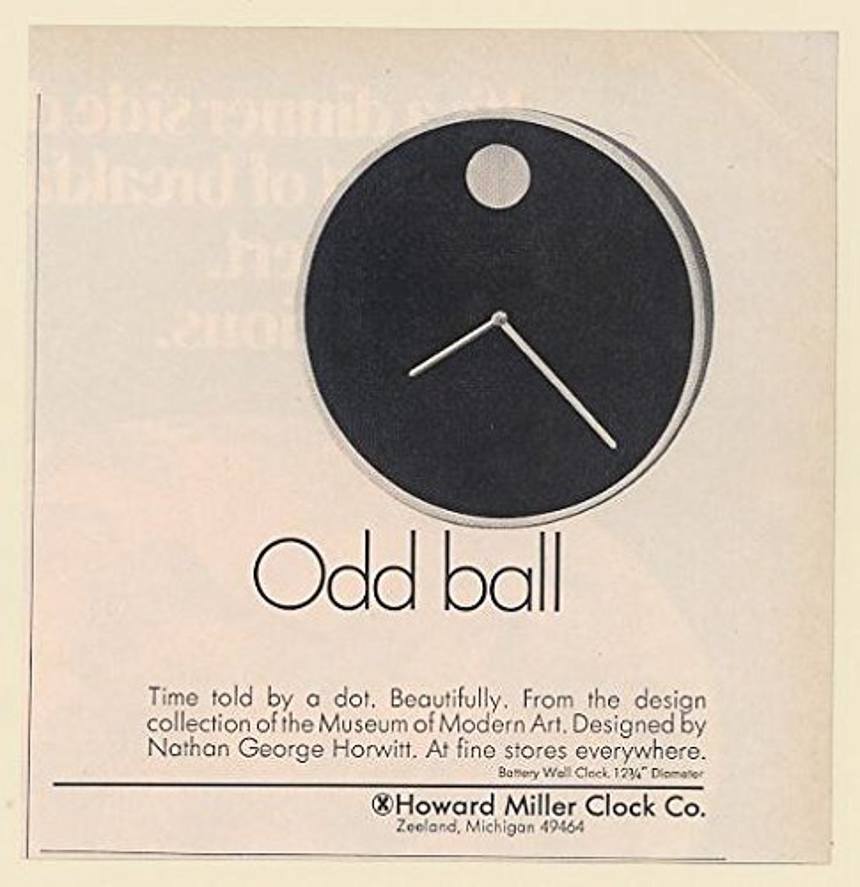 It is said that Horwitt was able to produce three of the watches with his original design via a personal commission in the mid 1950s. Almost a decade after he first created the design, he was still trying to properly monetize it. Horwitt’s inspiration for the Bauhaus-style clock dial was to remove as much of the unnecessary elements as possible and focus on the core element of “civil time,” which is the sun. The circle at 12 o’clock in fact represents the sun which in many ways takes the Museum Dial face from mere Bauhaus to something more akin to functional art. In the mid 1950s Horwitt was finally able to get a patent on the design.

In about 1955-1956, Nathan George Horwitt was said to have approached Vacheron & Constantin-LeCoultre Watches Inc. (the name of what apparently was not a watch maker but an American company that imported Swiss watches) to have them produce three watches for him with his dial. The fate of these three watches is interesting. Horwitt himself kept one of them for his personal use, one was sold to the Brooklyn Museum (that continues to own it, though the watch is not currently on public display), and the last one was sold to the New York metropolitan Museum of Modern Art (MoMA) in New York City in 1959. The sale of these watches to the museums and the fact that MoMA produced wall clock versions of the design is where I believe the “Museum Dial” name came from. 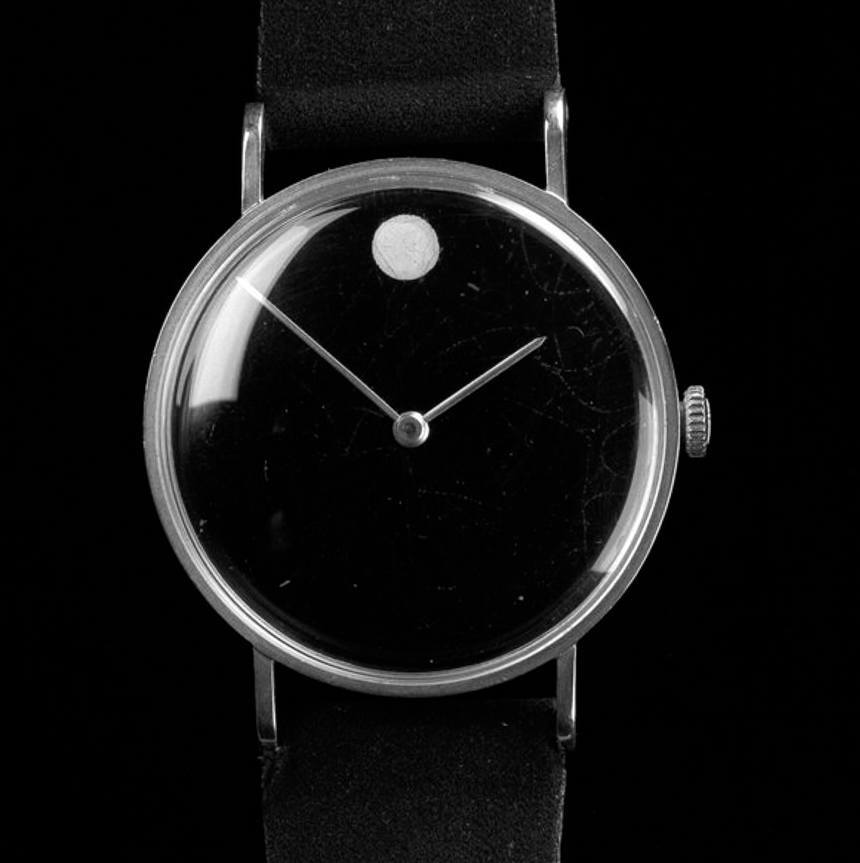 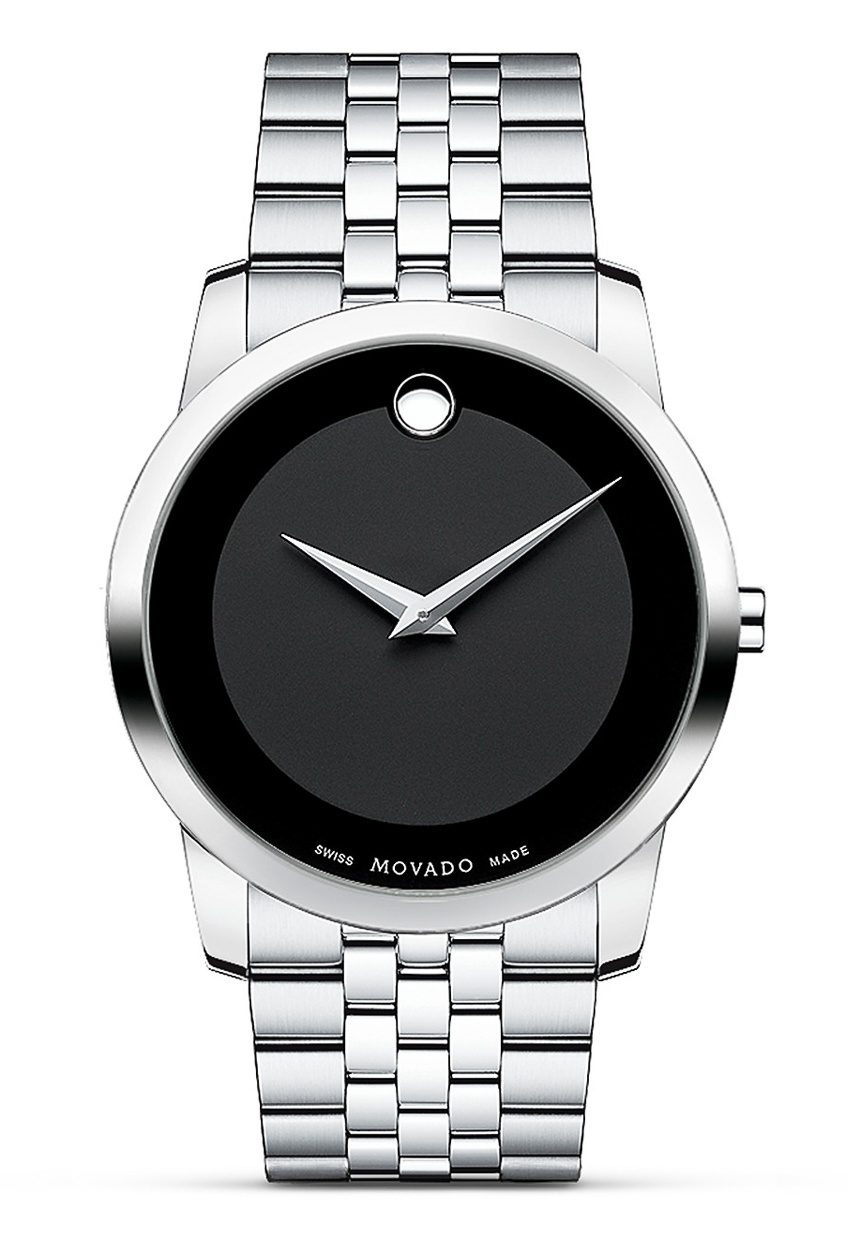 In the 1960s, the Museum Dial became very popular as both wall clocks and table clocks. Production was done by Herman Miller – the popular furniture maker. I am not entirely sure of the business arrangement which led to the clocks being sold and distributed by Herman Miller. In the advertisement above, you can see that the Herman Miller clock indicates a few interesting things. First, that at the time, the design of the clock was considered strange – yet agreeably beautiful. That is clear from the “Odd Ball” statement. Second, that in their advertisements Herman Miller acknowledged both Nathan George Horwitt as well as the “design collection” of the MoMA. I think the issue is salient, given the fact that at this same time during the 1960s, records seem to indicate that Movado continued to produce wrist watch versions of the Museum Dial.

It was apparently not until 1975 that Nathan George Horwitt and Movado settled what was apparently many years of negotiations and litigation. After all was said and done, Horwitt received a sum of just $29,000 from Movado to settle the law suit and apparently allow Movado to continue producing Museum dial watches. This continued into the 1980s, but it wasn’t until after Horwitt’s death in 1990 that Movado really started to produce the Museum Dial watch in large numbers. One must wonder, based on this fact, if Movado intentionally waited for Horwitt to no longer be around before really ramping up efforts with the successful Museum Dial watch design. 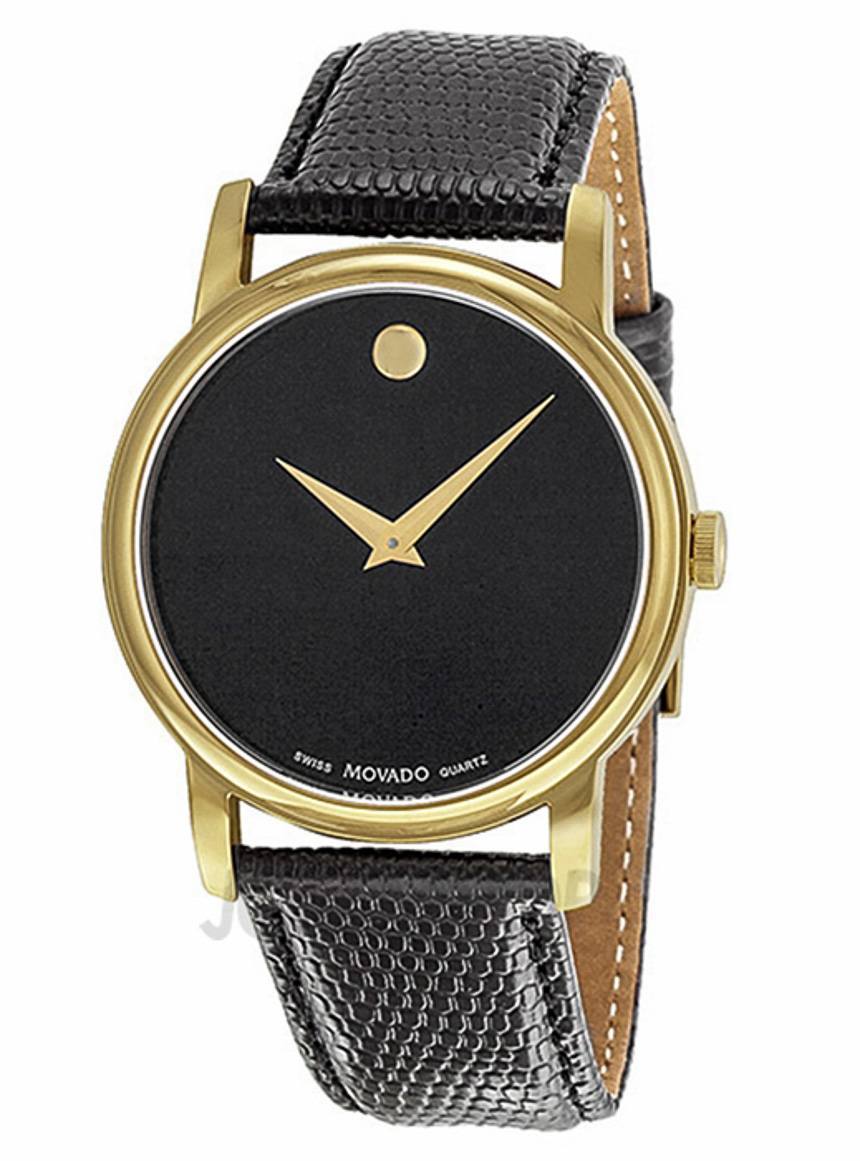 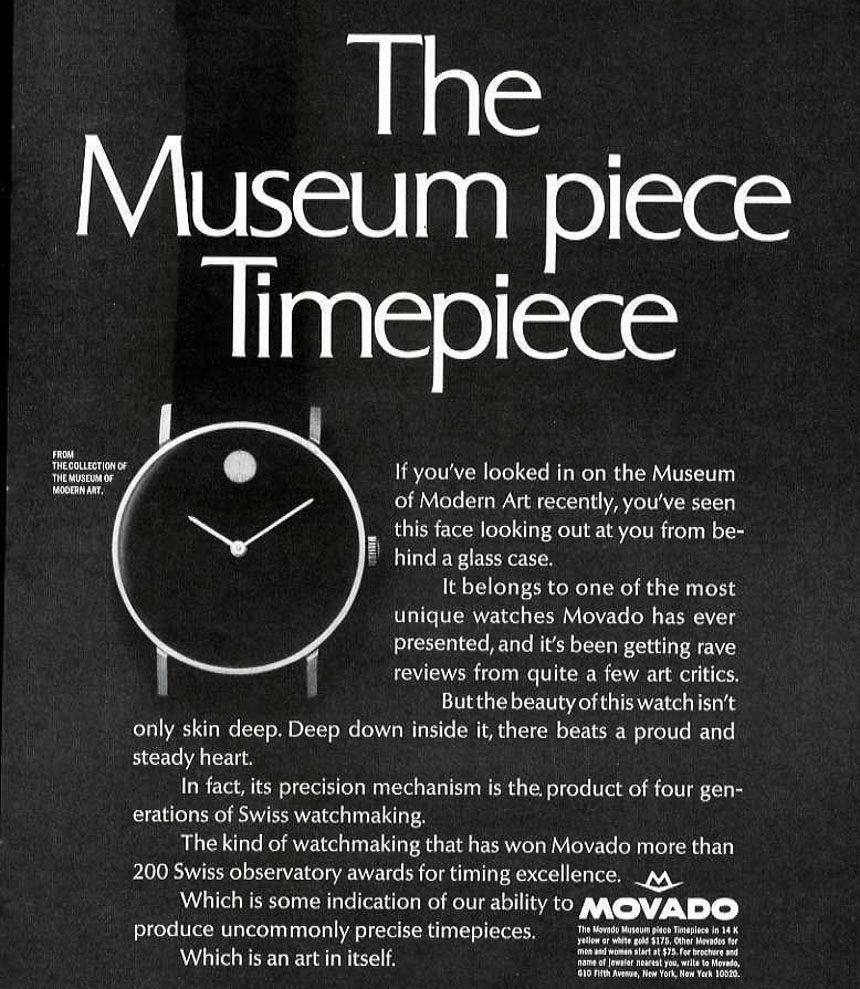 There are more facts out there about the history of the Museum Dial watch, and putting it all together is difficult, given some of the conflicting information that exists. Certain perspectives made Movado look worse than others, given the story of producing “unofficial watches,” and understanding the motivations of all the parties at all times depends on the sources you look at. I don’t want to portray any party as the winner or loser, but the reality is that by 1975, Movado had at least some official right to produce the watches. Then, in the early 1990s, production and sales of the Museum Dial watch really took off, and Nathan George Horwitt himself made relatively little money on what was his most famous design.

It is interesting to further speculate why the Museum Dial watch did so well in the 1990s – an era when digital timepiece usage was at an all time high, and when consumers started to wear watches less. The Movado Museum Dial was the poster child of wearing watches for style and emotional reasons versus sheer utility. I recall seeing these watches on countless people and always thinking “that looks really nice, but I have no idea what time it is.” In an era when people started to have other sources of time in addition to their wrist watch, style and design started to become more important than the sheer utilitarian value of wearing a timepiece. In the 2000s, this concept became even more pronounced, as timepieces began to rapidly consume the attention of the high-luxury world. 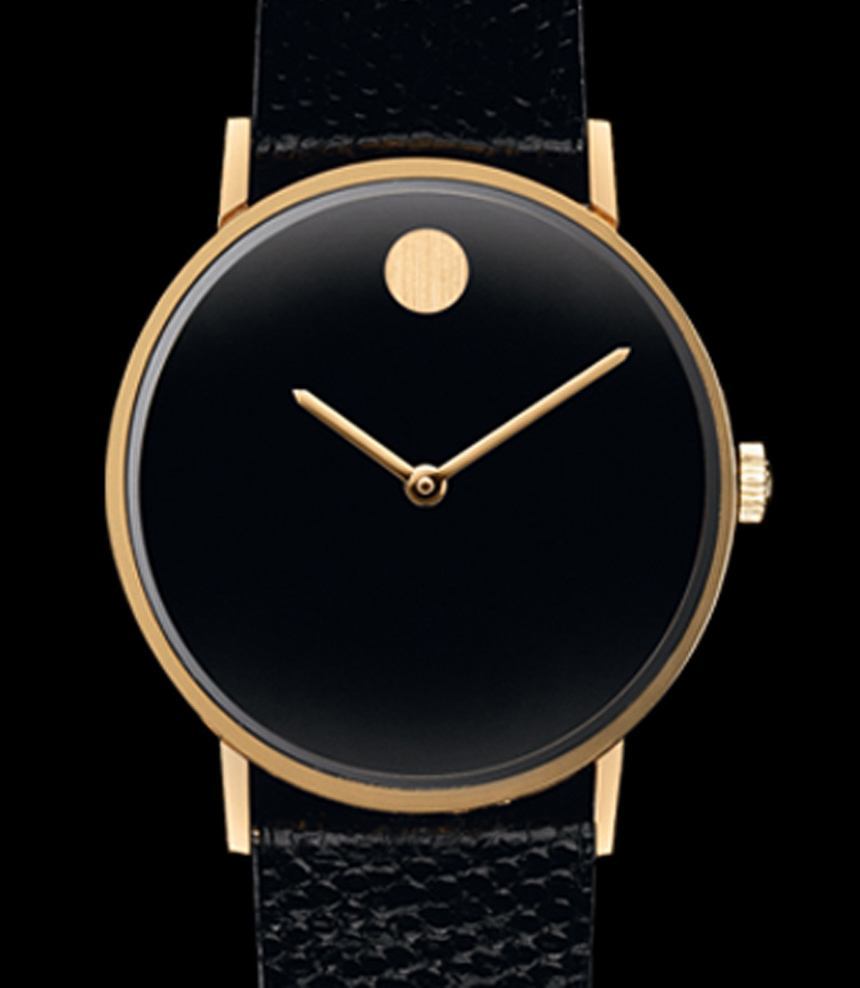 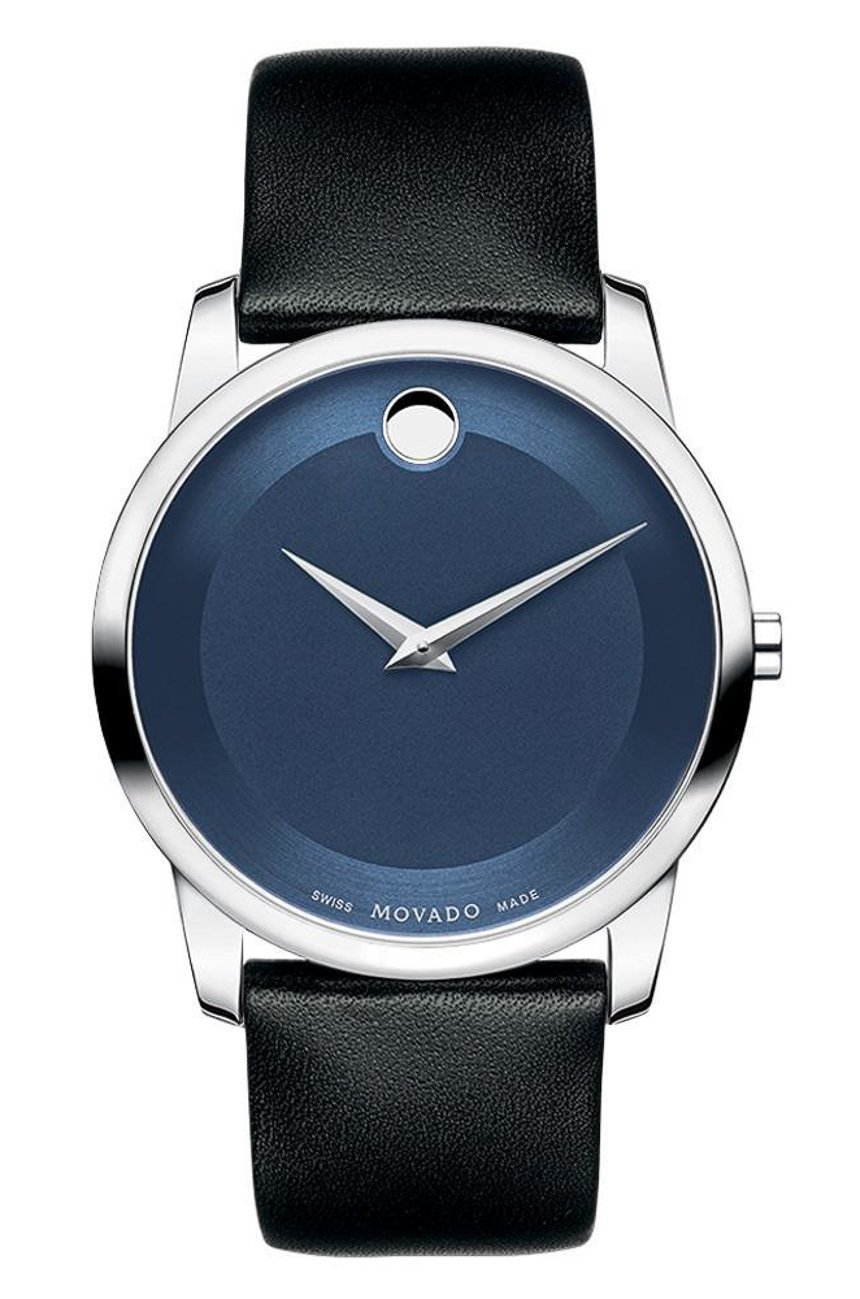 Some likely reasons for the lowered popularity of the Movado Museum Dial watch in the early 2000s was the fact that it went against emerging tastes. For one thing, it was a small diameter dress-style watch at a time when most men were beginning to gravitate toward larger, sportier watches. Also, most Movado Museum Dial watches contained quartz movements at a time when more and more watch lovers were focusing on mechanical watches. Over the years, Movado experimented with larger diameter Museum Dial watches, sport versions, and even mechanical versions – none with the success of the classic models from the 1990s, which succeeded because of the simple, quartz-based offerings and under $1,000 price points.

The new Movado Museum Dial Classic watch is a genuine return to the simple elegance of what many people remember from those that populated the 1990s, and with enough modern updates. The dial, for one, is slightly updated with a darker outer ring and a slightly lighter inner ring. We, once again, see the dauphine-style hands that typified the 1990s-era Museum Dial watches, as well as a polished element for the sun marker at 12 o’clock. The Movado Museum Dial Classic comes in various styles, each in a 40mm wide steel case that is quite thin. Of course, inside the watch is a Swiss quartz movement. 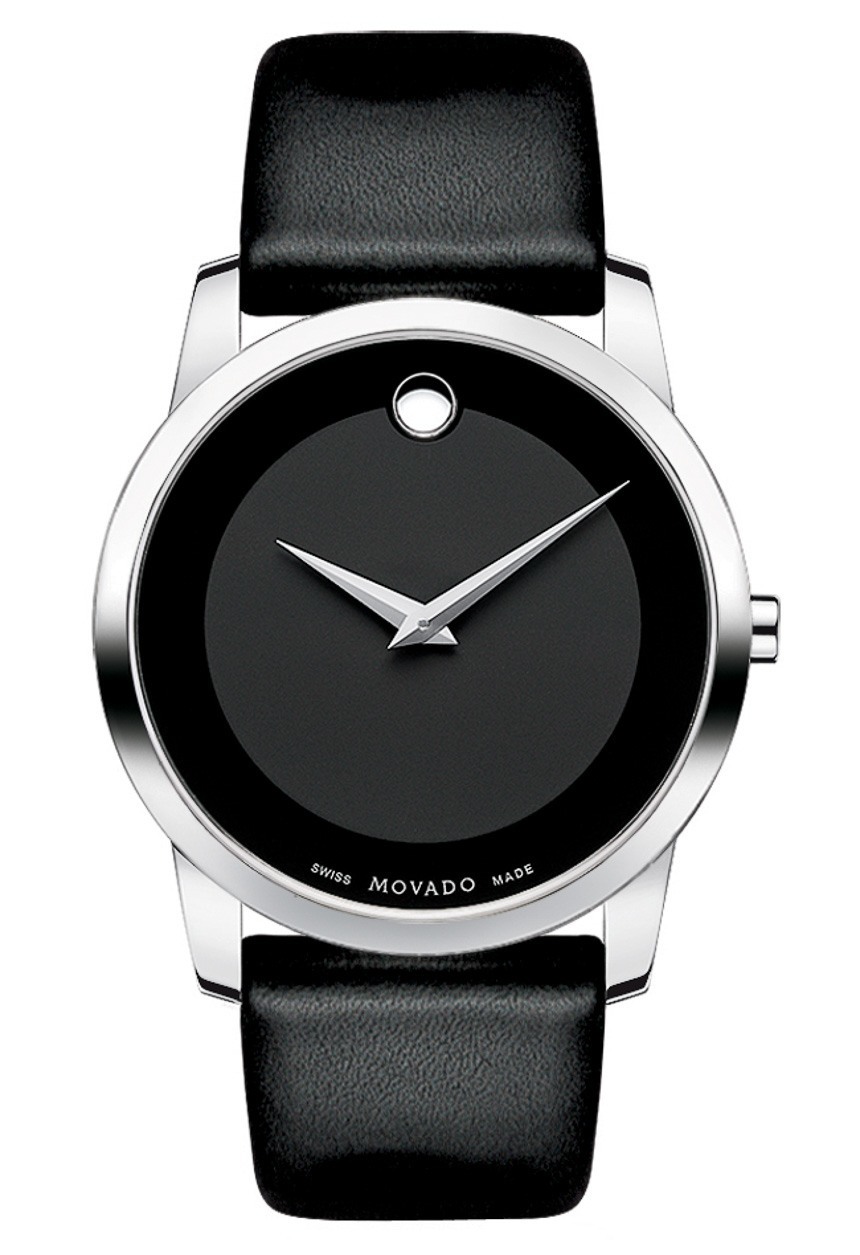 In addition to the classic black-dialed version, there is also a new blue-dialed Movado Museum Dial Classic watch, which is a nice addition to the family. There are also PVD-coated rose gold colored models, a two-tone model, and versions on steel bracelets. I think the beauty of the Museum Dial watch is as relevant and apparent today as it ever was. While I still can’t easily read the time on them, I continue to be amazed by the attractive concept and the genius that is the original Nathan George Horwitt design. Like all iconic things, the design comes with an interesting history. The question now is if the watch world is ready again for the Museum Dial, and whether Movado has the right formula to make it popular once again. The Movado Museum Dial Classic watches are priced at $495 – $995. movado.com