My Gift Giving Theory: Not What They Want, But What You Want Them To Have 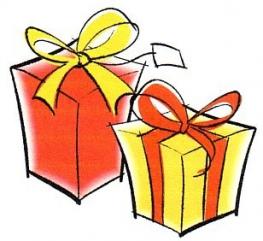 The gift giving season is upon us, and at least for myself, the biggest issue is always, “what should I get ____?!” Of course, the commercialized nature of the season imbibes us with the notion that our paramount motivation for the next few monthsis ardently selecting those gifts that, “they will remember/will mean something to them/will make them think fondly of me forever.” Often times this task requires far more dedication and thought than is possible for busy people such as ourselves.

Let me first proclaim that the prospect of successful gift giving would be an almost non-issue if money were not a question. There is an almost infinite wealth of glorious gift ideas at our disposal if we could assert a large budget on the matter. Alas, we are woefully limited by the meager budgets we often set aside for such tangential luxuries as the giving of thoughtful gifts to others.

So what are we do to? Even those loved ones whom which we know so well can present a quandary when it comes to selecting unsolicited gifts. And when someone asks for a gift, is it really received in the manner in which you would prefer? No. The sense of gleeful surprise is merely emulated in the receiving party, upon which you have failed to accomplish the gift giving goal.

An end to these frustrating outcomes is as simple as following my theory of gift giving; give them what you want them to have. In the past we were consumed with finding the perfect gift based upon what we perceived someone wants. No more will you be faced with the prospect of generosity failure. From now on, you decide what life direction you’d have the gift receiver take, and act accordingly.  Don’t like the clothes they wear? Get them a shirt you think would look good on them! Don’t like the activities they engage in? Get them the foundation of a new hobby. And of course, if you don’t like the watch they wear, get them one that you think suits them. If after receiving your heartfelt gift they at first don’t seem pleased because it is not what they said they wanted, no worries! Just proclaim earnestly to the aggrieved party that in your elated opinion, the gift not only suits them, but will make them a better person.

When selecting gifts stop torturing your mind with conceptions of what people want. Simply picture each person on your shopping list in your head and visualize what, in your opinion they are without or you would like them to have. This is the easiest and most personally rewarding way of giving of yourself! Aren’t you looking forward to suggesting, “I’d sure like to see you in those new socks I got you!”

So during these and all subsequent holidays, remember the secret behind gift giving success. Take the proactive and natural approach and give the gift your instincts suggest. You’ll feel more confident about giving the gifts, and if they don’t like your offerings, tell them that it is an attack on your tastes! Success.