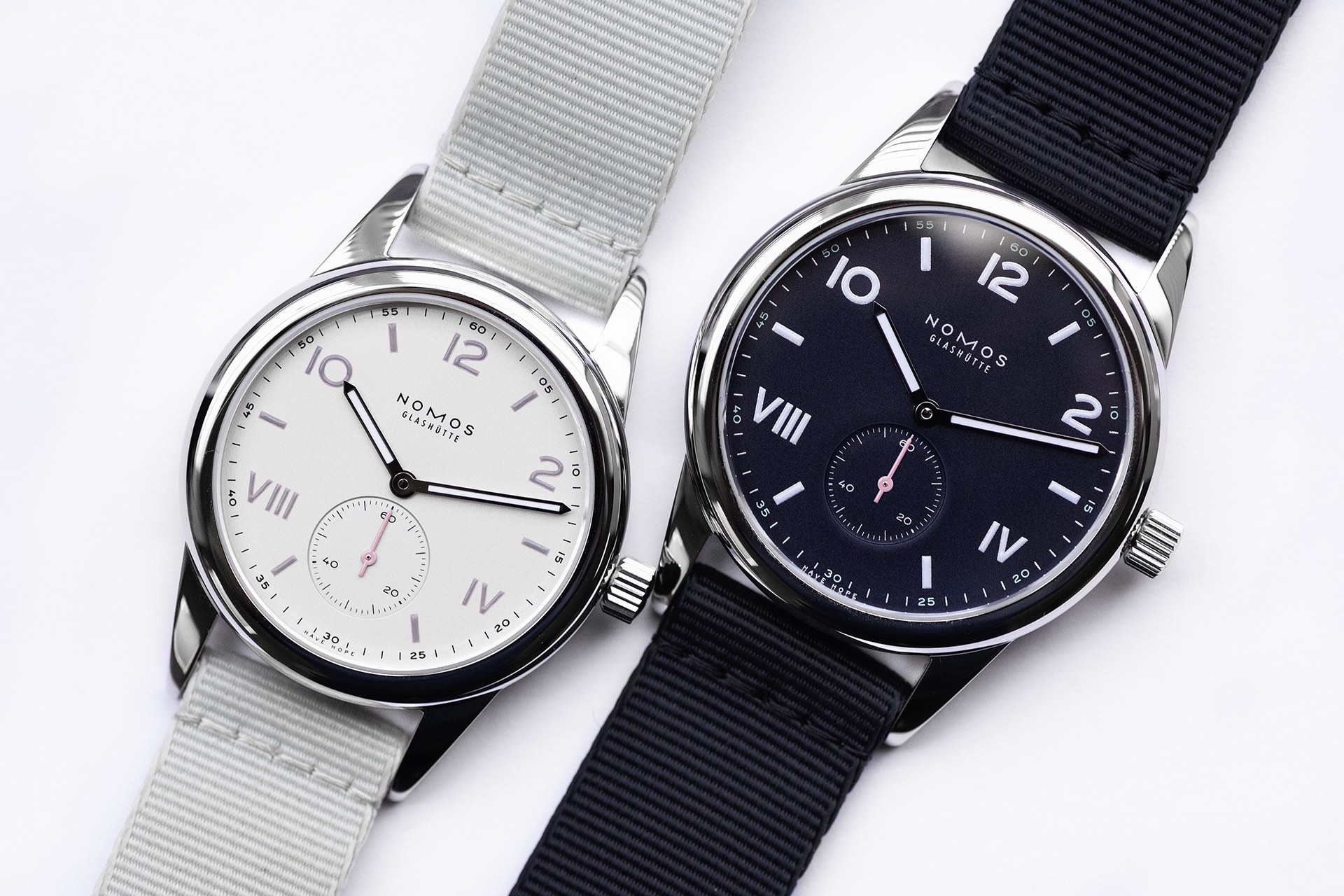 The National Breast Cancer Foundation (NBCF) is one of the most important breast cancer organizations in the world, dedicated to breast cancer awareness, education, and early detection. The NBCF, Nomos Glashütte, and Timeless Luxury Watches collaborated to create two new watch models that feature the cause’s trademark pink, and a portion of the proceeds from each watch goes to the NBCF. These proceeds help the NBCF provide education and mammograms in order to detect breast cancer in its earliest stages, when it is most treatable. 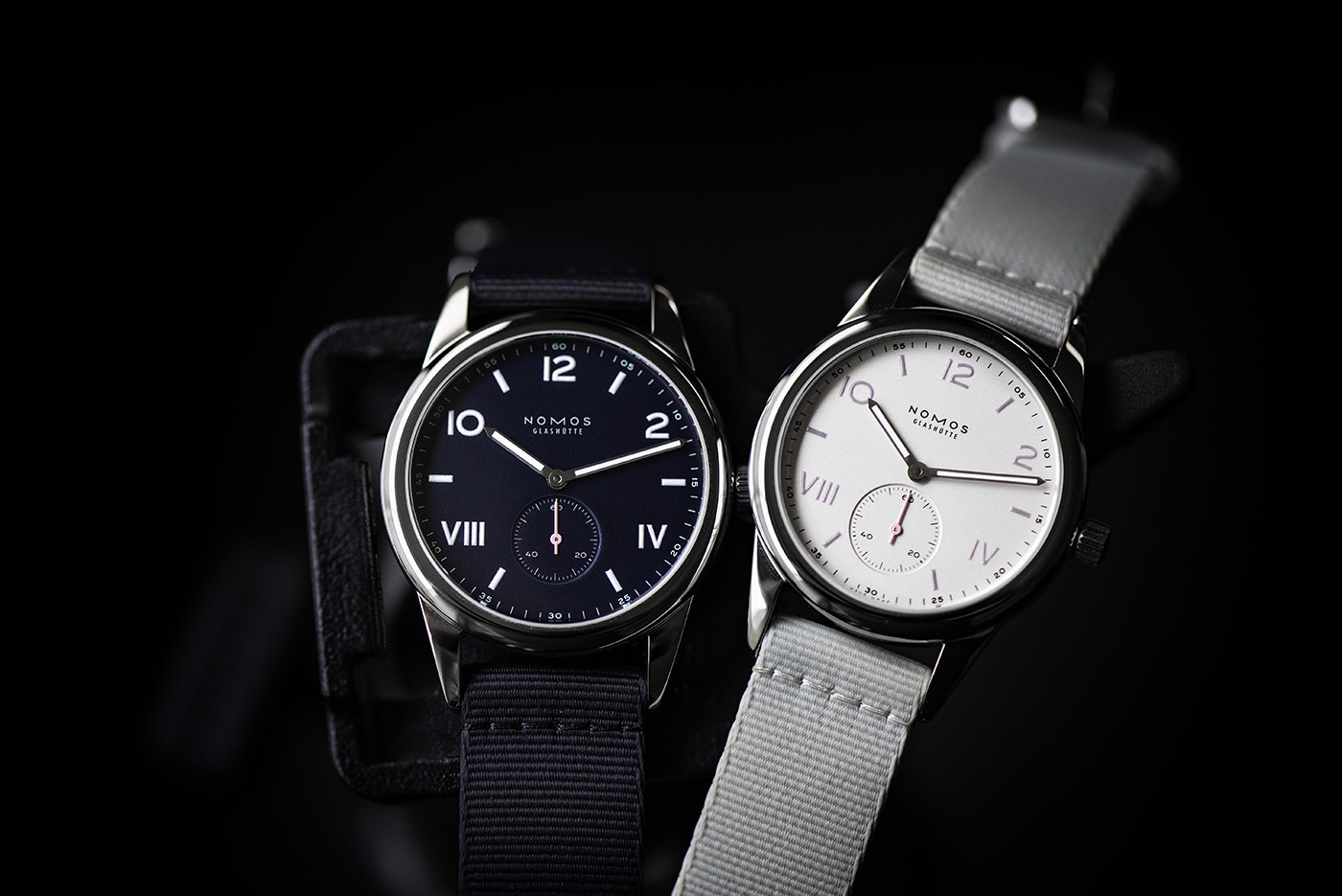 The NBCF and Timeless worked together to create a watch that features the color pink, widely recognized as the symbol of breast cancer, but instead of simply creating pink dials, we focused on integrating pink into the existing Club Campus design in a more subtle way. 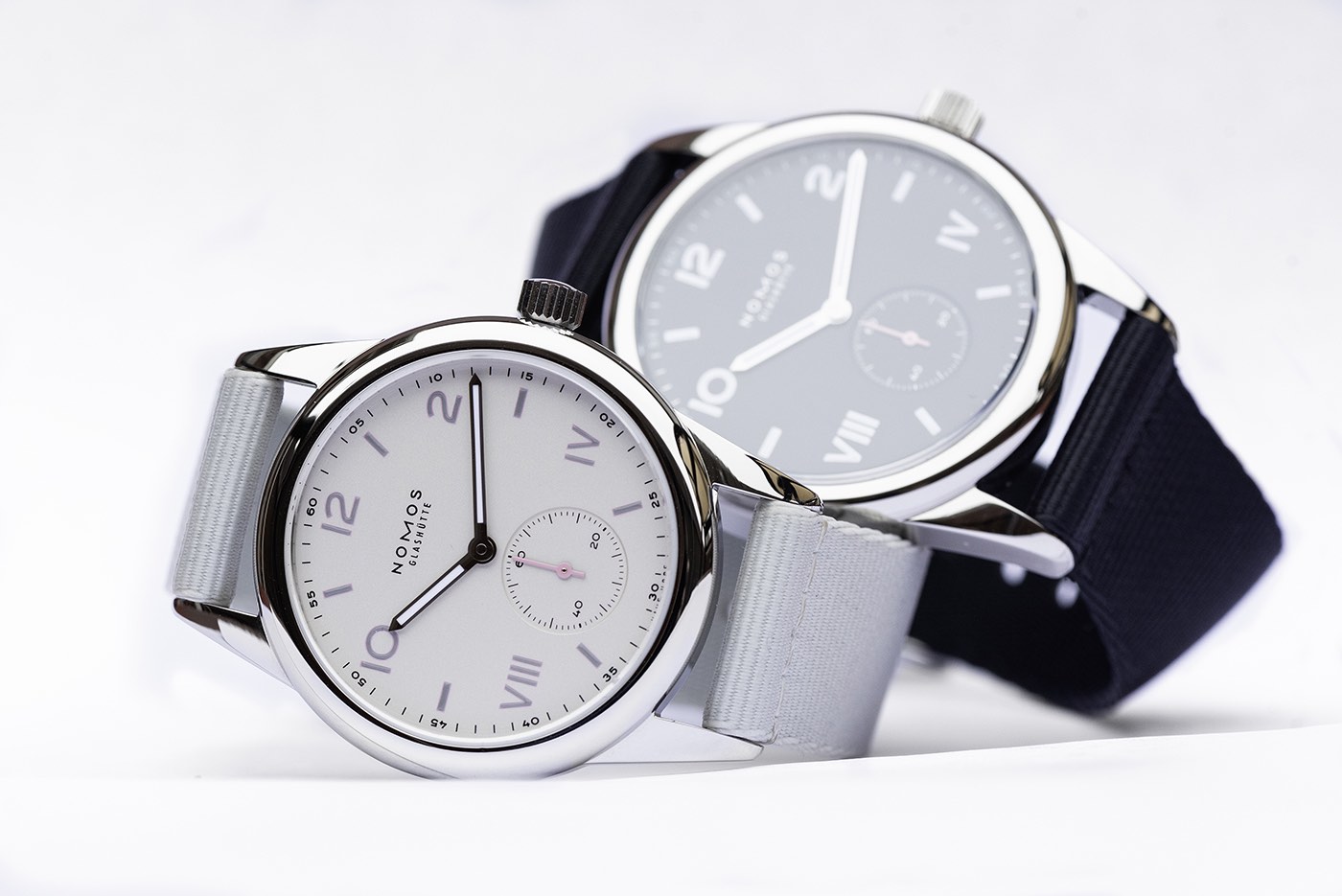 To make the watch available to more people, we created two versions in two different sizes. The smaller size is the 36mm 708.S2 with a white silver-plated dial. Like the regular Club Campus, it features both Arabic and Roman numerals. The most obvious change is, of course, the pink seconds hand. 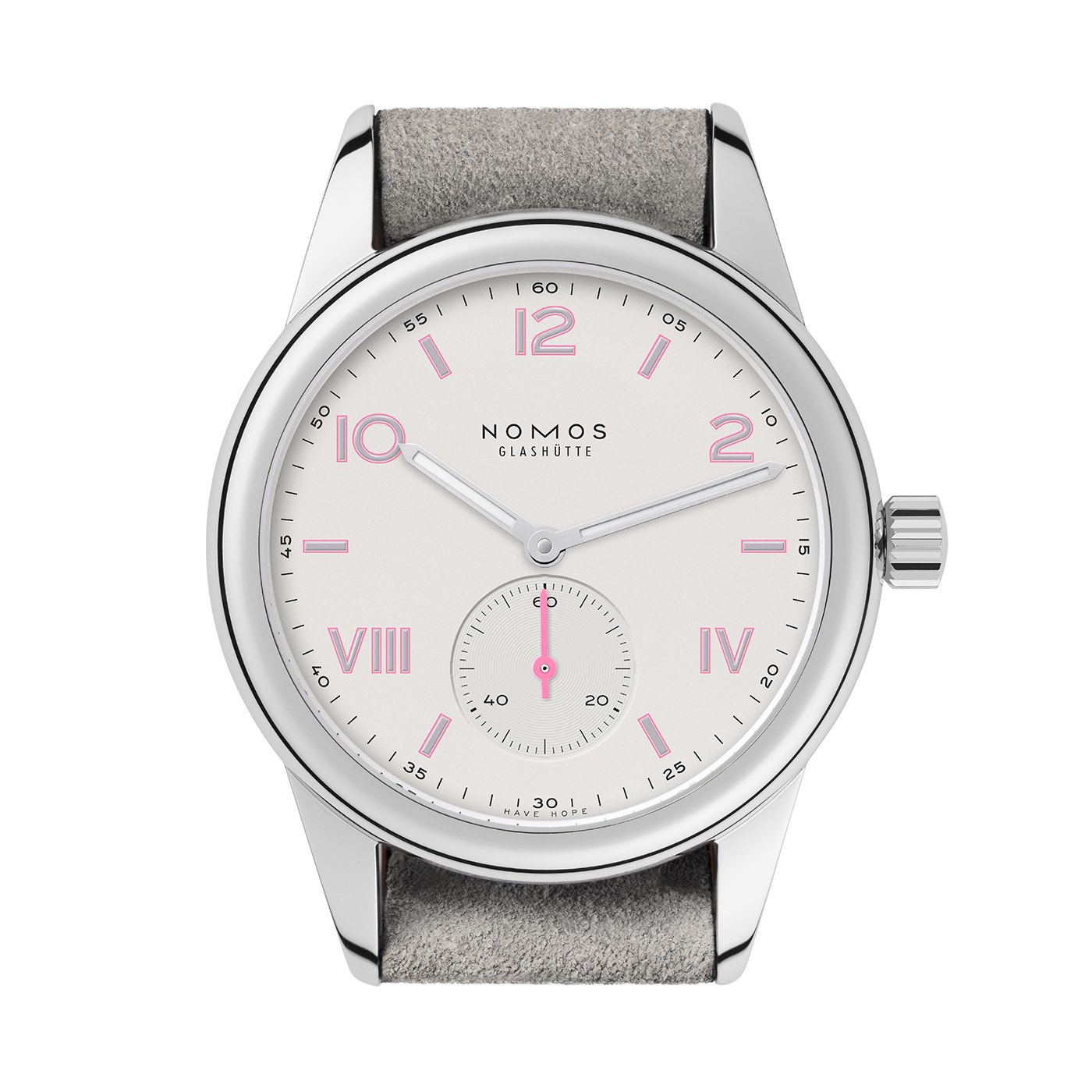 The pink theme is carried to a thin outline of the numerals as well. Another subtle change is found at 6 o’clock. Where the watch would normally say “Made in Germany,” it now reads “Have Hope.” 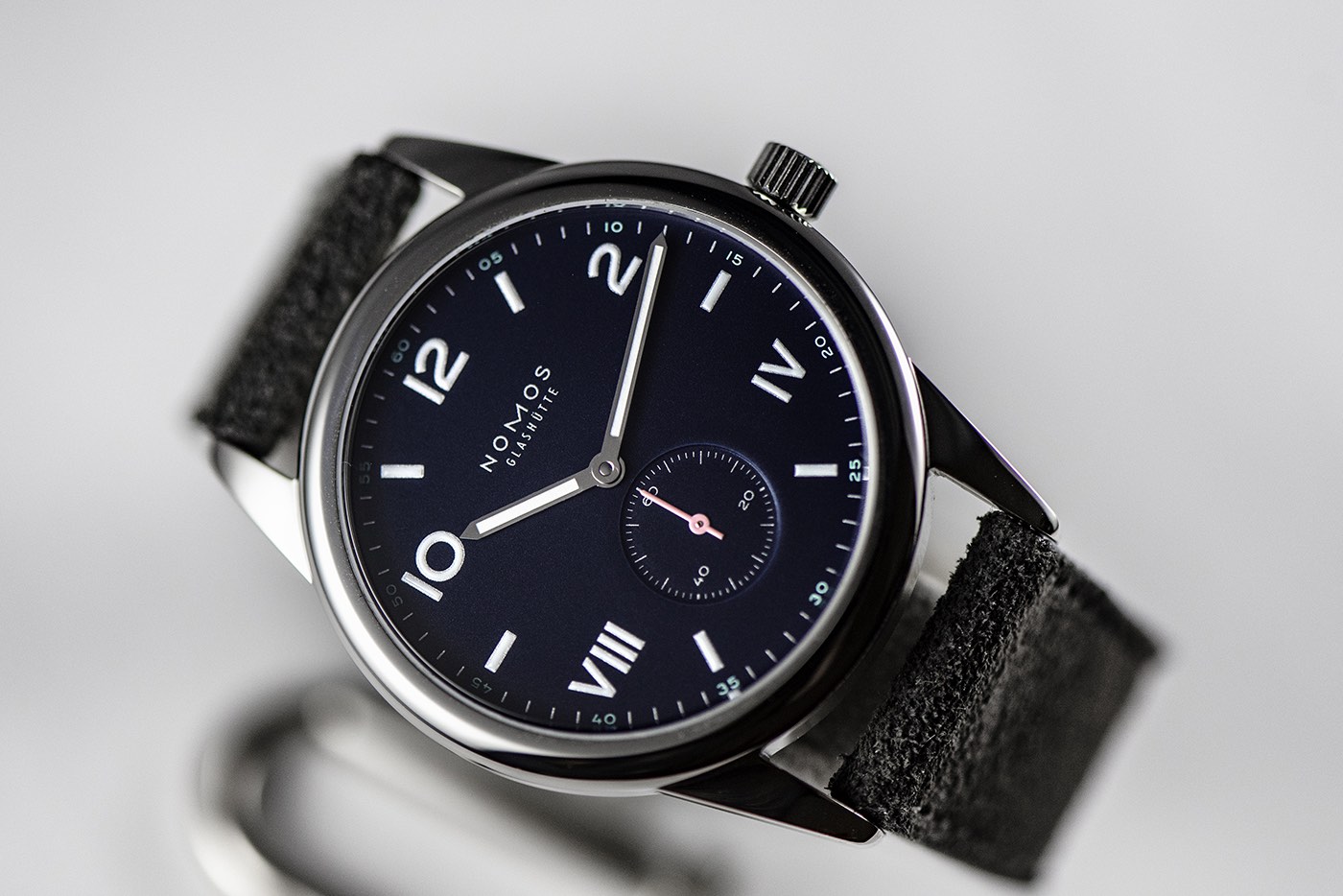 The second model, the 736.S2, is slightly larger at 38.5mm, and features a beautiful dark blue dial. Unlike the NBCF Club Campus I, pink is only found in the seconds hand. However, it stands out much more against the blue dial than the white dial found in the smaller Club Campus. 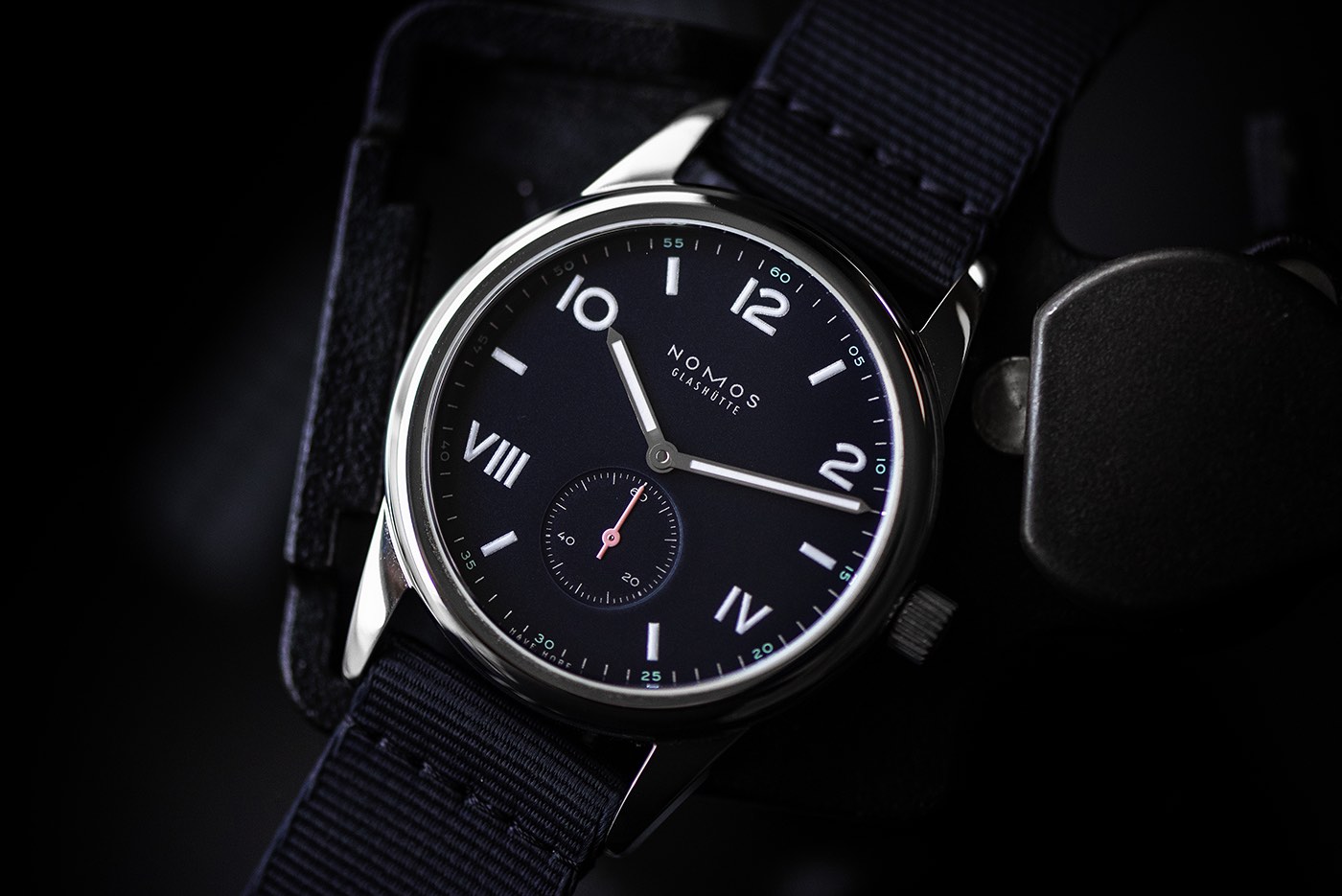 Silver outlines, instead of pink, surround the numerals on the 38.5mm model. The outer minute numerals are in a shade of blue that complements the bright seconds hand. While there are fewer pink elements on the larger watch, it’s arguably the bolder of the two because it makes its one pink element so prominent. The “Have Hope” writing is also found at 6 o’clock. 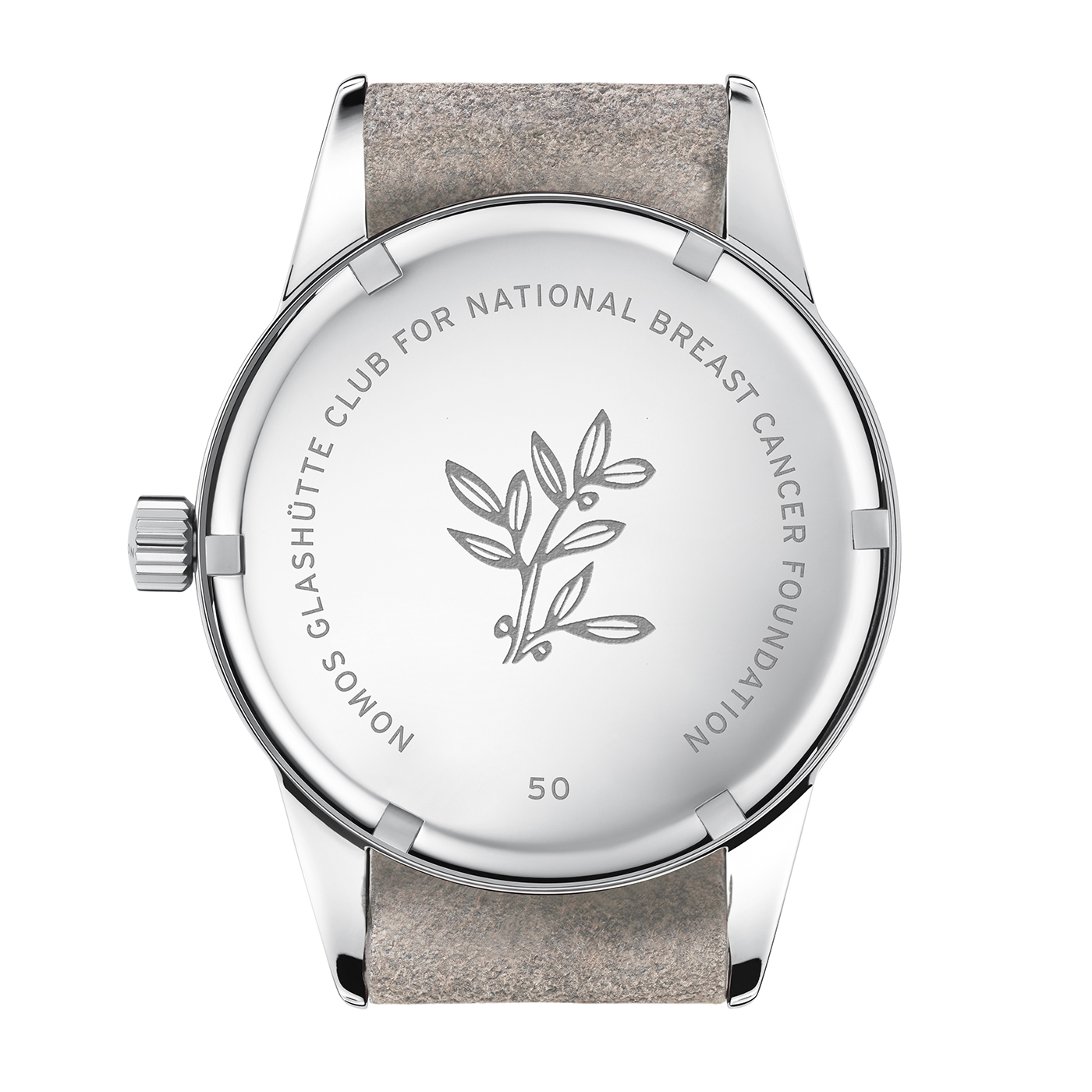 All NBCF Club Campuses come with solid casebacks featuring the logo of the National Breast Cancer Foundation. The symbol of a tree branch comes from NBCF founder Janelle Hail’s own story. Following her treatment for breast cancer, she saw a tree branch outside her window that had only a single leaf remaining. However, the leaf was a vibrant red, and Janelle remarked “I want to be like that leaf, brilliant until the end.” The logo was inspired by that tree, and it symbolizes life, growth, and hope for the future. 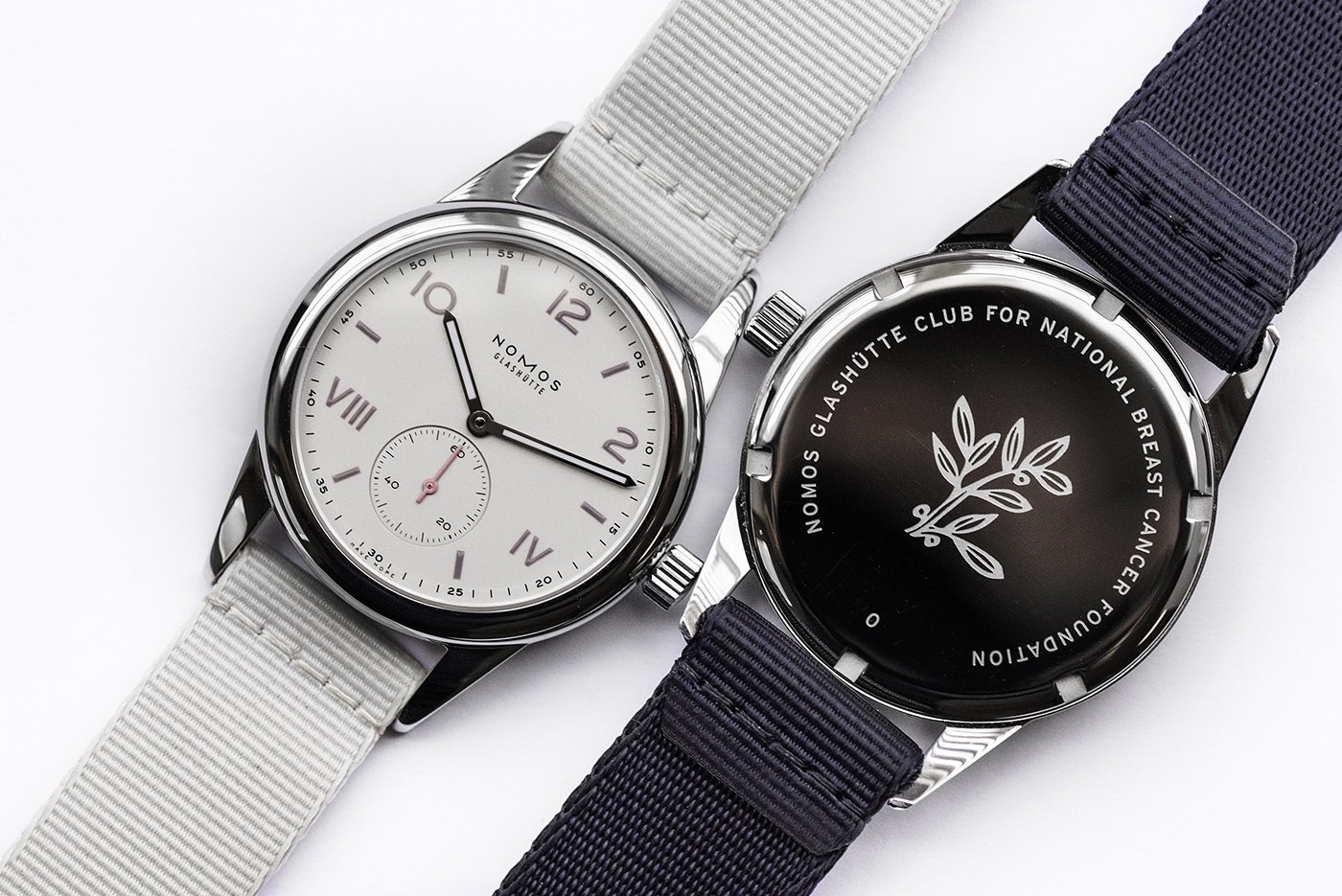 Custom engraving is also available so people can write something special for the watch’s recipient. 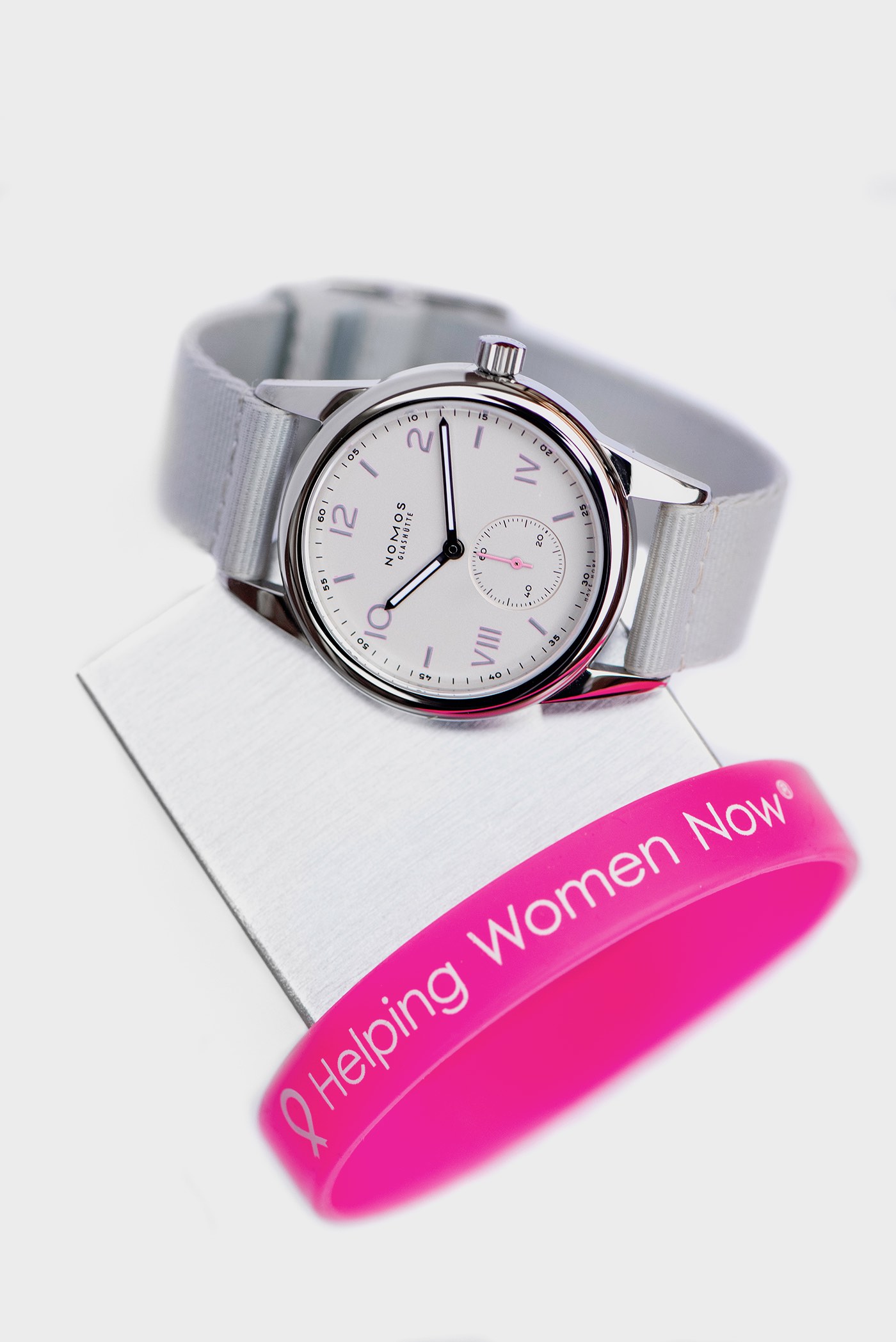 Inside both of the NBCF Club Campuses is the modified Alpha hand-wound movement, upgraded with the Nomos swing system, the same movement we’ve used in our Timeless Club II, Midnight Edition Orion and Timeless Ludwig models. It’s a very beautiful, thin, and reliable movement and an ideal companion to these watches. 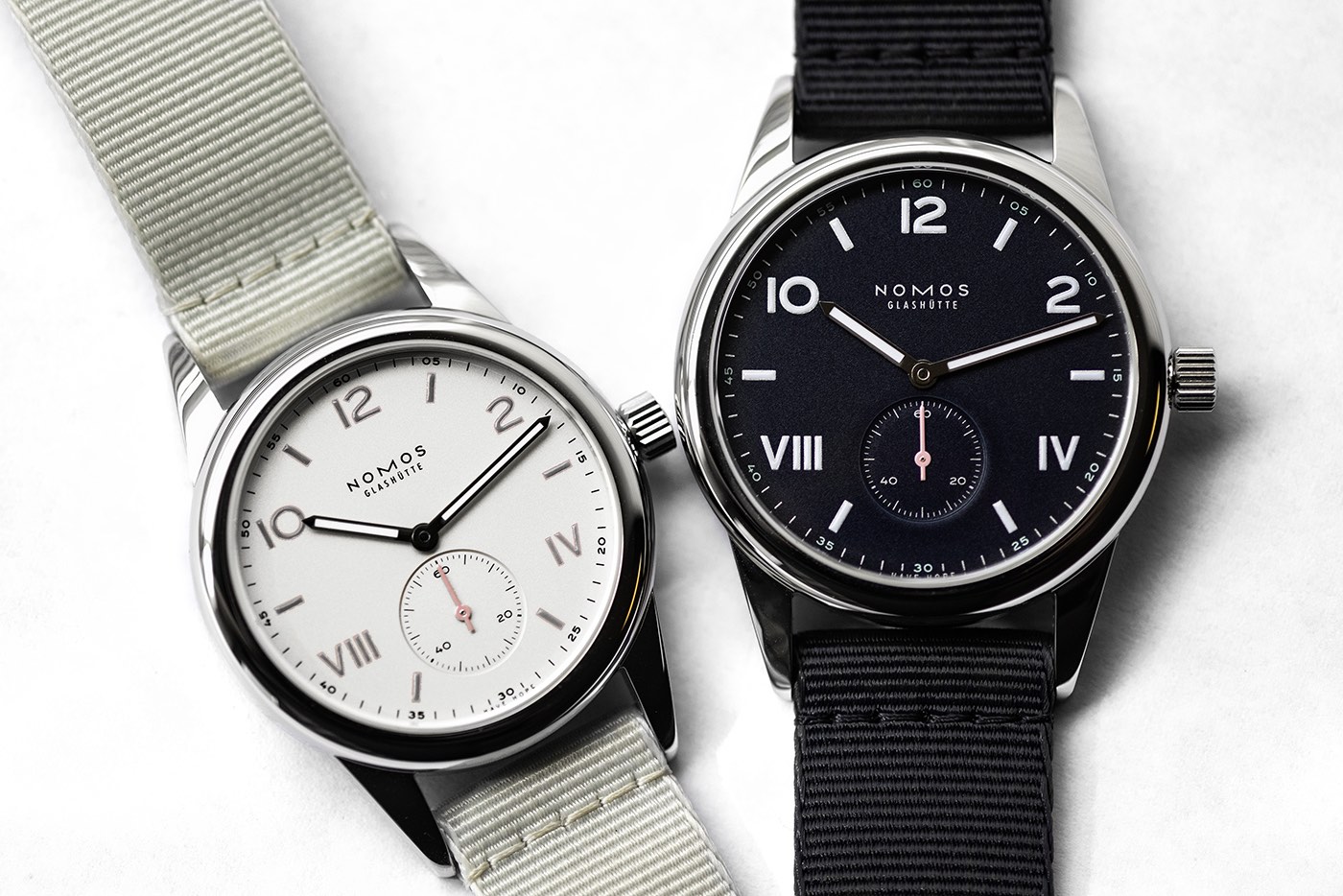 The NBCF Nomos Club Campuses are not limited editions, but rather regular production models intended to create a continuous contribution to the National Breast Cancer Foundation. Each should be available in March. The prices for both are unchanged from the original versions, $1,500 for the 36mm model and $1,650 for the 38.5mm model.

Buying an NBCF watch is not the only way to support the fight against breast cancer. Please click here to donate to the NBCF or find other ways to help.