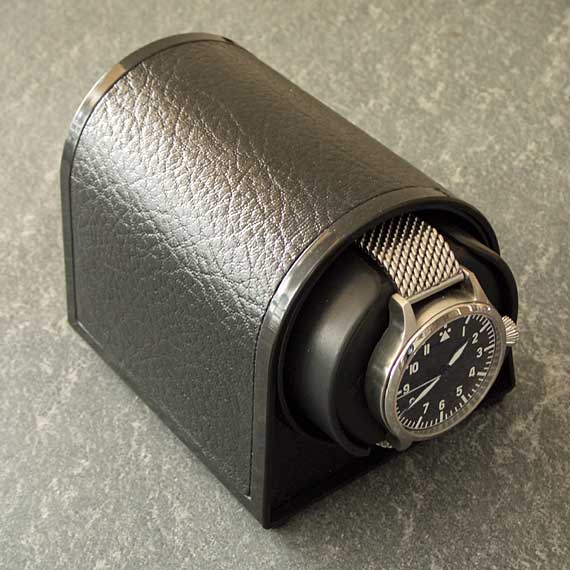 aBlogtoRead.com reader Michael L. was the lucky winner of the Orbita Sparta 1 Mini Watch Winder giveaway help a few months ago. He was nice enough to take some images of his winnings and provide his thoughts. I reviewed the Orbita Sparta 1 Mini myself here. Overall I think he really liked the winder for its easy functionality and quite use. Though Michael is a man which larger wrists, and some of his watches may have felt large (but not necessarily too large in the winder). Here are his thoughts (I comment a bit in there as well).

The winder is not overly large, yet I was very pleasantly surprised that it could hold my watches just fine. I have larger than normal wrists, 8.25-8.5″ around and tend to wear larger watches. A good size for me is 46 mm, and I can go up to 52 mm without it looking too silly. Most of my automatics are between 46 and 48 mm.

The Orbita winder comes with two different pillows. The thicker of the two fit perfectly for my watches with bracelets sized to my wrists. The first watch I put in there was my 48 mm Debaufre Nav B-Uhr LE. It was a perfect fit around the pillow, the pillow slid into the holder and that fit perfectly into the winder. 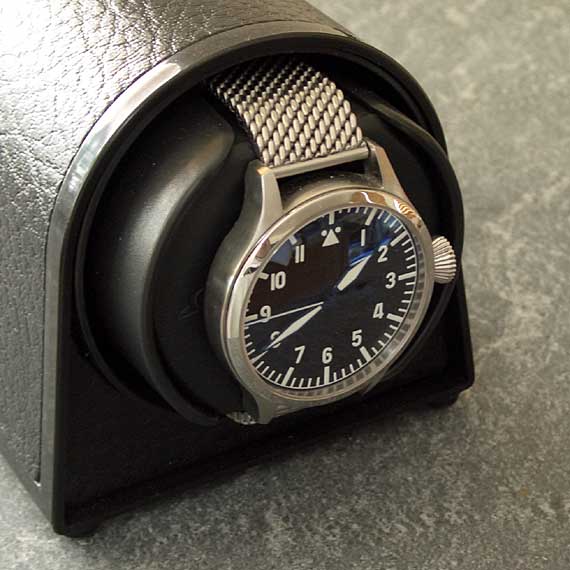 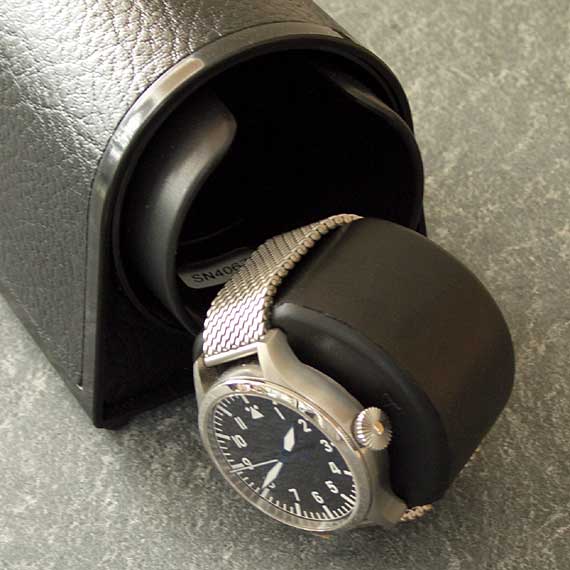 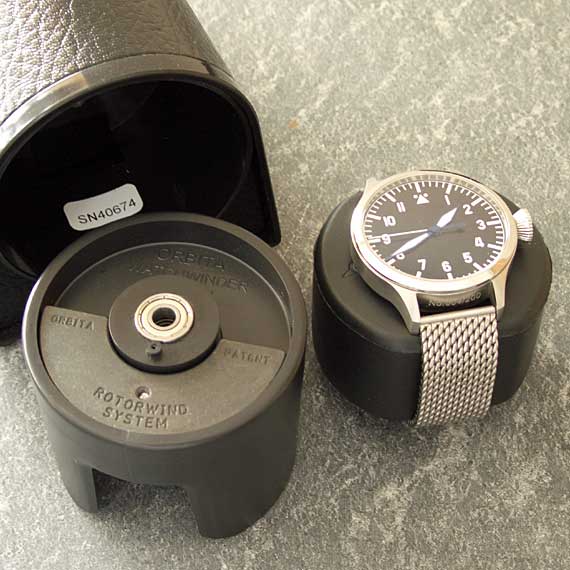 This winder is quiet! It sat a few feet away from me by my desk and I couldn’t hear it at all. The output takes 10 minutes to make a complete rotation. That means the watch will slowly rotate clockwise for five minutes and then will swing back for forth a bit and then sit still for five minutes until the motor catches the pin on the holder and starts moving it again.

This leads me to the first minor issue I had. When I first got the winder I did try to put a number of different watches in there. I suppose it’s possible to just pull out the pillow, but often I’d pull the holder out as well. [Ed. note – the holder is designed to be pulled out as well. It is perfectly safe for operation and can be pulled out easily and safely.] Once I didn’t push the holder in far enough for the lever on the motor’s output to catch the pin, but I didn’t notice it. There’s no obvious indication available at all times to show the winder’s working. For five minutes the watch is perfectly still and for the next five it slowly rotates 180 degrees. Sure, if it’s someplace where you can see it you should notice that every 10 minutes it swings back and forth, but it just so happened that was the last watch I put on the winder for the evening and then didn’t look at it again until the next afternoon. I was very surprised that the watch had stopped running. It took me a while to figure out what I did wrong: not push the holder in all the way. [Ed. note – it is true the the pillow holder needs to be put back in all the way. It is possible to not realize this the first time, but it is easy to put it in all the way, and not make the mistake again.]

The motion of this winder is the gentlest of any I’ve ever owned. It takes five minutes for the watch to rotate through 180 degrees and then it swings back and forth a few times and rest for another five minutes. All of the watches I put on the winder had ETA 2824s in them and they all continued to run for as long as they were on the winder. I wondered if there would be enough movement, as according to Orbita’s web site, my watches with the 2824s in them need 650 revolutions/day. This Orbita’s motor only makes 144 turns/day, but every 10 minutes the watch does swing back and forth. None of my watches stopped, but perhaps they were running down and eventually they’d stop… [Ed. note – Myself and Orbita have done lots of testing to ensure that the motion of the Orbita 1 Sparta Mini fully winds watches. It is true that it appears to wind watches less, but this is not actually the case. The momentum created when the weight drops is actually without and jerkiness, and results in a significant amount of force for the rotor to wind a good deal.] I took one of my watches (the Glycine Lagunare 1000), shook it for a few seconds to get it going and set the correct time. I never manually wind an automatic watch, but simply get it going and then wear it. That’s always worked well for me. I put it on the winder for 48 hours and then stopped it. The watch still showed the correct time. I then let it run until it stopped and it ran for about 26 hours. Perfect. The winder is slowly winding the watch. I know an automatic can’t be overwound, but I’m sure there’s more wear and tear happening if you’re spinning the watch so quickly so that it gets fully wound in a matter of hours (like some I’ve seen) This winder would probably take a bit more than three days to fully wind this movement when it’s completely unwound. 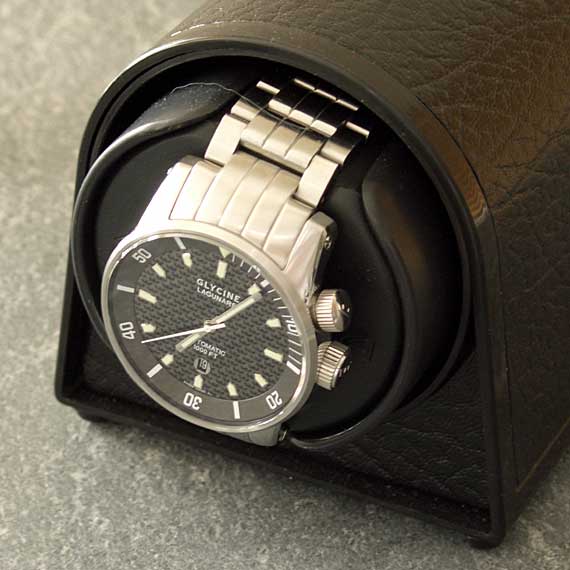 The one problem I did have with this winder was being able to use it with watch without a bracelet. I first tried to put in a 46 mm Glycine Stratoforte that’s on a rubber dive strap. I like rubber dive straps as they tend to be longer than normal straps. I guess that’s so they can be worn over a wet suit, but for me they’re a perfect length. However, the end if the strap sticks out a bit, and when the holder is in the winder the strap rubs against the winder. The watch certainly doesn’t freely swing back and forth and I couldn’t use it. [Ed. note – it may be true that the largest of watch bracelet or strap lengths aren’t adept for this type of winder. In fact, such large straps would likely be an issue for most winders. This won’t be a problem for the majority of owners though.] 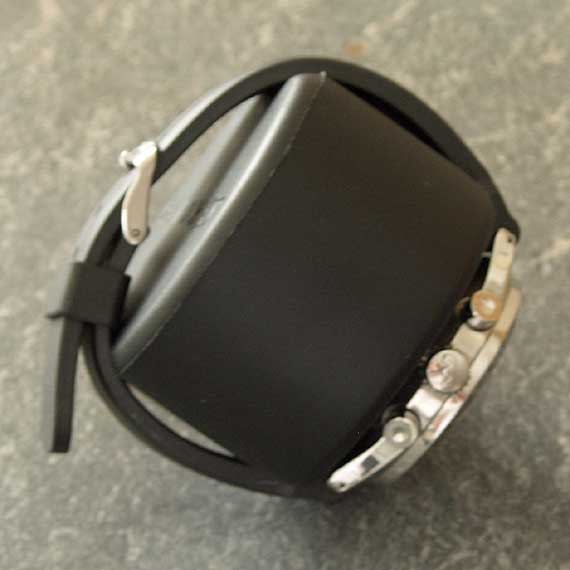 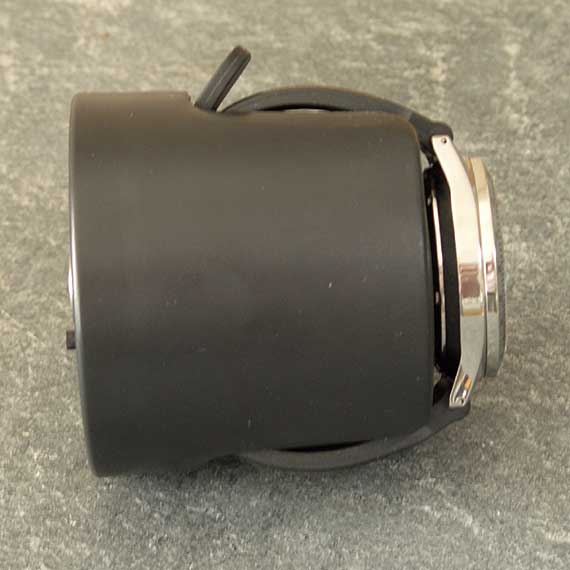 I also tried watches with leather straps and had similar problems. My Glycine Altus is on a narrow, shorter strap than the Stratoforte has. The tail doesn’t extend too far, but the curve of the strap sticks out just enough so that there’s friction against inside of the winder. I wouldn’t want to use it like this as I’m sure it would eventually mark up the strap. Perhaps I could have tightened the strap a bit, but then I’d be using a hole I don’t normally use and putting another crease on the strap. I might also run into the problem where the end of the strap would then stick out too far. [Ed. Note – Michael has big wrists!] 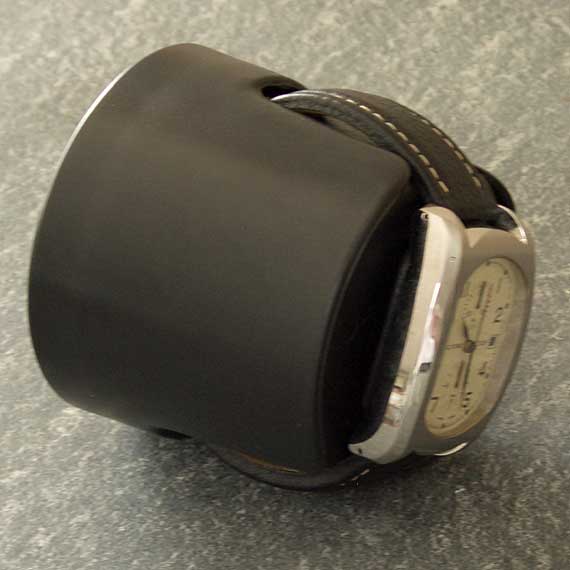 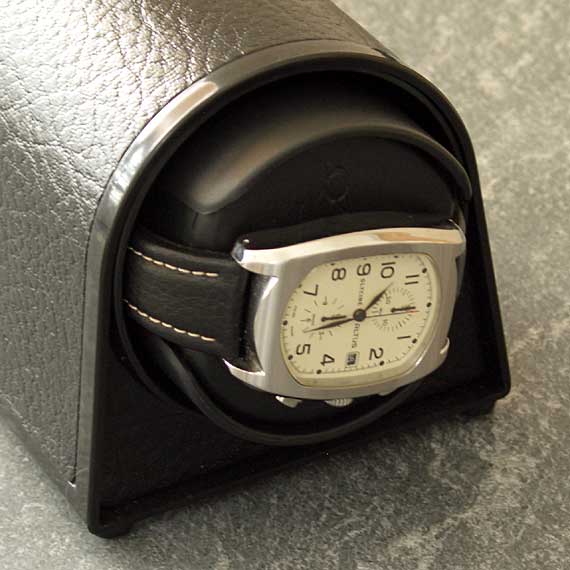 If there wasn’t such a close fit between the watch holder and the inside of the winder this would be a perfect winder. It’s silent, gentle and keeps the watch wound – what’s not to like? It certainly holds some of the larger watches being made today, and I have no doubts it would work well for smaller watches that have bracelets sized for smaller wrists than I have. However, there are some watches with straps that will not work. This may be limited to larger watches with longer straps, as I can imagine shorter straps being able to squeeze the pillow more so there’s more clearance.
If your watches fit properly in this winder I would certainly recommend it.

Thanks Michael for your thoughts. I take this as a positive review, with the qualification that people with very large wrists should consult with Orbita referencing the length of their watch straps before getting this, or any watch winder for that matter.