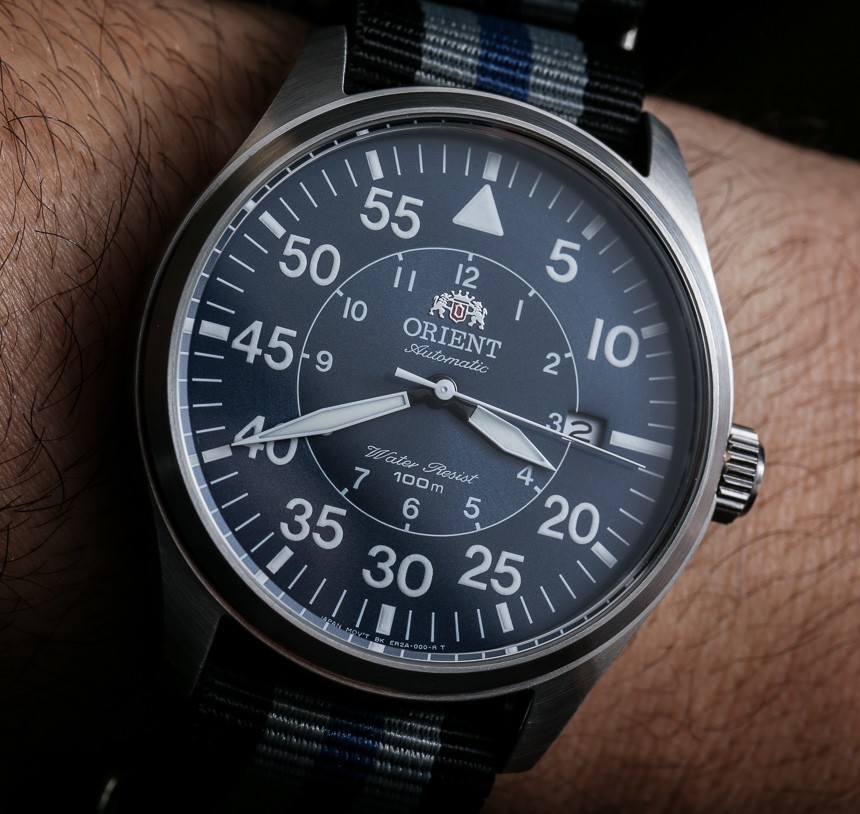 Orient Watch USA’s description of the Orient Flight watch is remarkably straight-forward and to the point. They claim that “the Flight Watch is Orient’s take on the quintessential classic Pilot’s piece,” and that is immanently true. Aviation timepieces are second only to divers’ watches in popularity when it comes to sport watches, and everyone needs at least one pilot-style watch in their collection. Unlike dive watches with a specific set of functions in mind, pilot watches are a bit more ambiguous in terms of what makes them “for pilots.” Traditionally, a pilot really just needed a clear way to tell the time, and in some instances, a second time zone or chronograph complication was useful. Of course, pilot watches can be discovered with a whole universe of practical or “creative” features. Though, when it comes down to it, the most classic pilot watches simply indicated the time, and did so with ease.

If there is anything that pilot watches should have in common, it is legibility. Therefore, most of today’s pilot/flight/aviator/aviation watches are either reminiscent of historic aviator watch designs, or of actual cockpit instrumentation. The Orient Flight is the former, and is the Japanese watch makers take on producing a simple yet attractive pilot-style watch. Offered with a few dial colors, I was immediately drawn to the powdery metallic blue dial of this Orient Flight ref. FER2A004D0. In addition to the blue dial Orient Flight watch, Orient currently offers the same watch in five versions that also include green, black, tan, and also a black dialed version with a black-colored case. 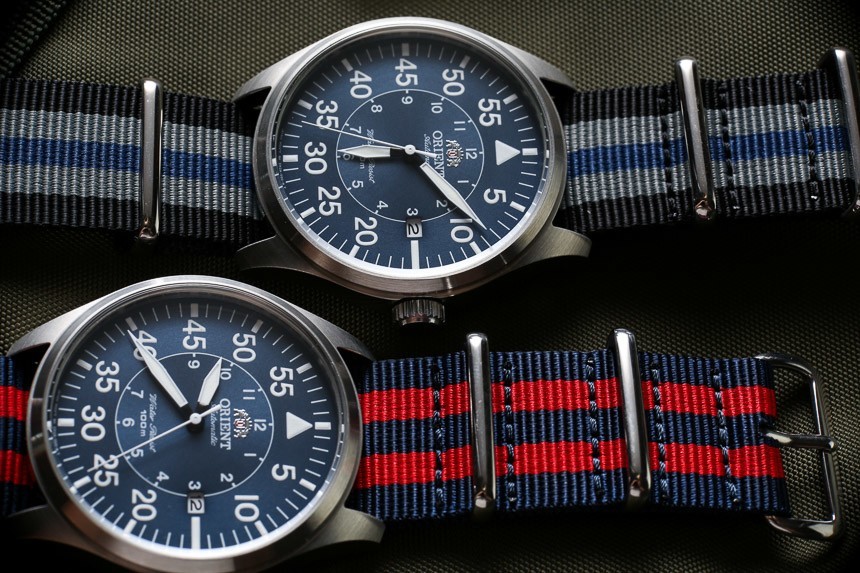 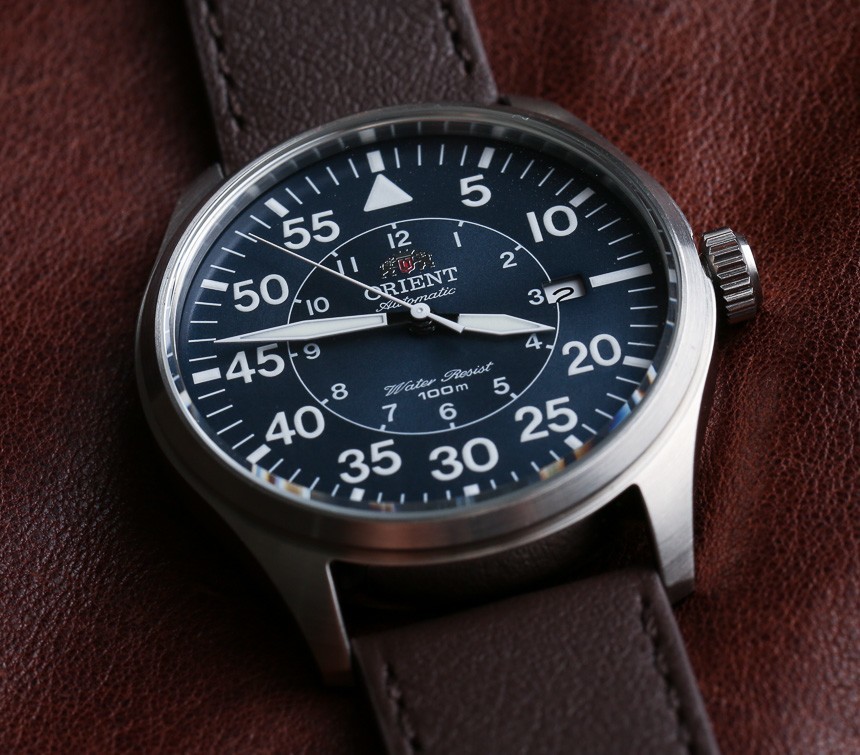 Let me first start off by saying that the I’ve gone ahead and played a bit with the strap choices on the Orient Flight. The blue dialed version comes with a simple dark brown leather strap, which is fine, but I was inclined to change it up. I not only felt that the interesting dial deserved better, but I personally am not really a fan of dark brown straps that don’t have interesting textures. It reminds me of wearing chocolate on my wrist and simply doesn’t go that well with my skin tone. I thus decided to test the Orient Flight out with some inexpensive NATO-style straps thanks to Marc over at Long Island Watch. Long Island Watch sells these for about $10 a piece, and also happens to be an Orient watches authorized online retailer.

On the mixed blue or blue & red NATO strap I think the Orient Flight comes alive much more than on the brown strap. If you want a more sober appearance I recommend choosing the Flight with a black case and dial with a black strap (ref. FER2A001B0). When opting for the version with the blue dial, you clearly want to wear a watch with some personality. If that is your goal, then swapping out the strap is a fun idea – and not just for this watch of course. 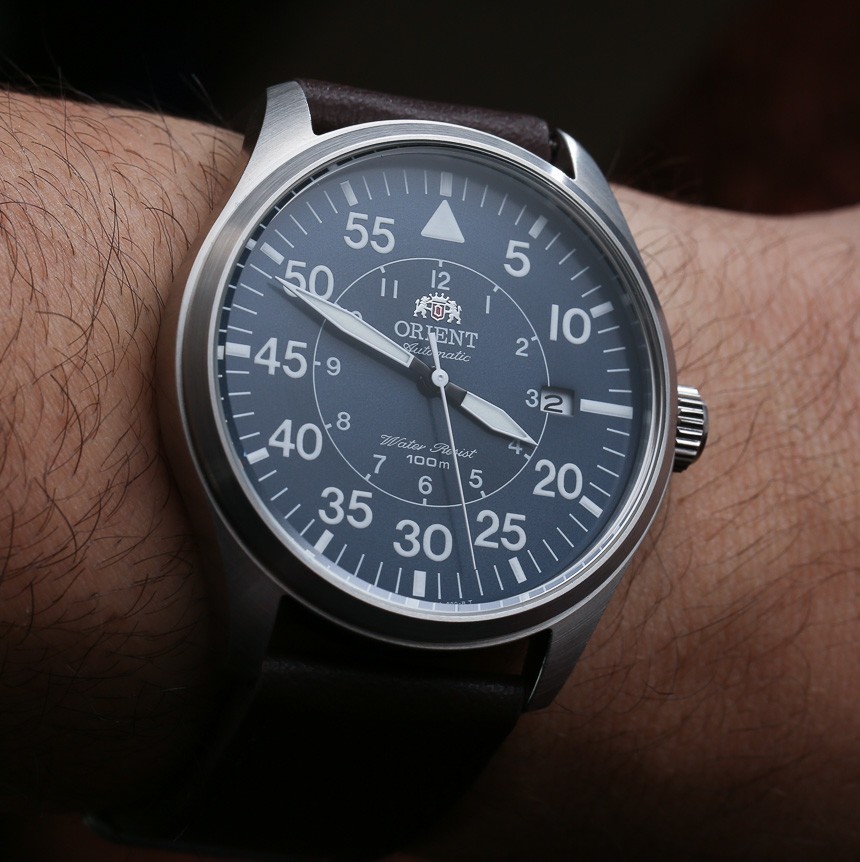 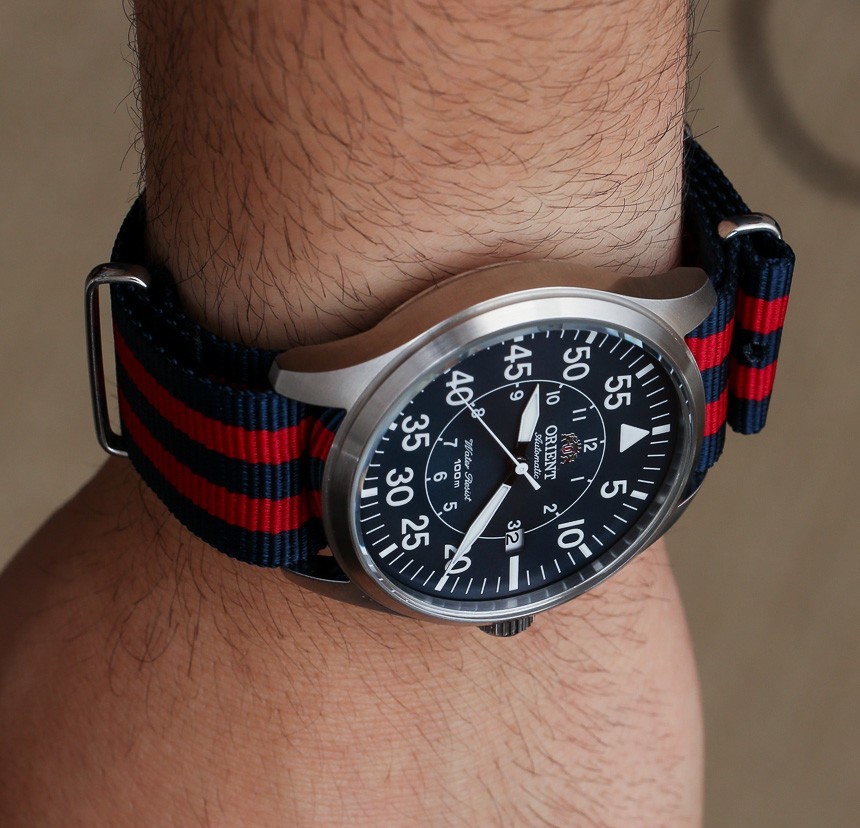 Many traditional pilot watches have dials where the indicators are placed in what I consider to be a more logical position. That means there is an inner track for the hour markers that matches the length of the hour hand, and there is an outer track for the minutes that matches the length of the minute hand. It can look strange, but you can’t argue that it doesn’t logically make more sense. Of course, when hands are the wrong size these dials look terrible, but when the hands line up with at least something in a logical way, then you get a rather fine “tool style” dial that I for one rather appreciate.

Another way that many watch makers mess up the hands on pilot watches is by putting black hands on a black or dark dial. Often these watches have hands with lume-painted interiors, but the end result is hands that look much smaller than they actually are. I quite frankly hate this, and only a few brands such as IWC tend to consistently produce these hands with the right materials so that they appear proper on the dials. What Orient did was even more simple, and create totally white hands save for the ends. This means that the hands never look smaller than they are – which is a very good detail on a watch at this extremely affordable price point. 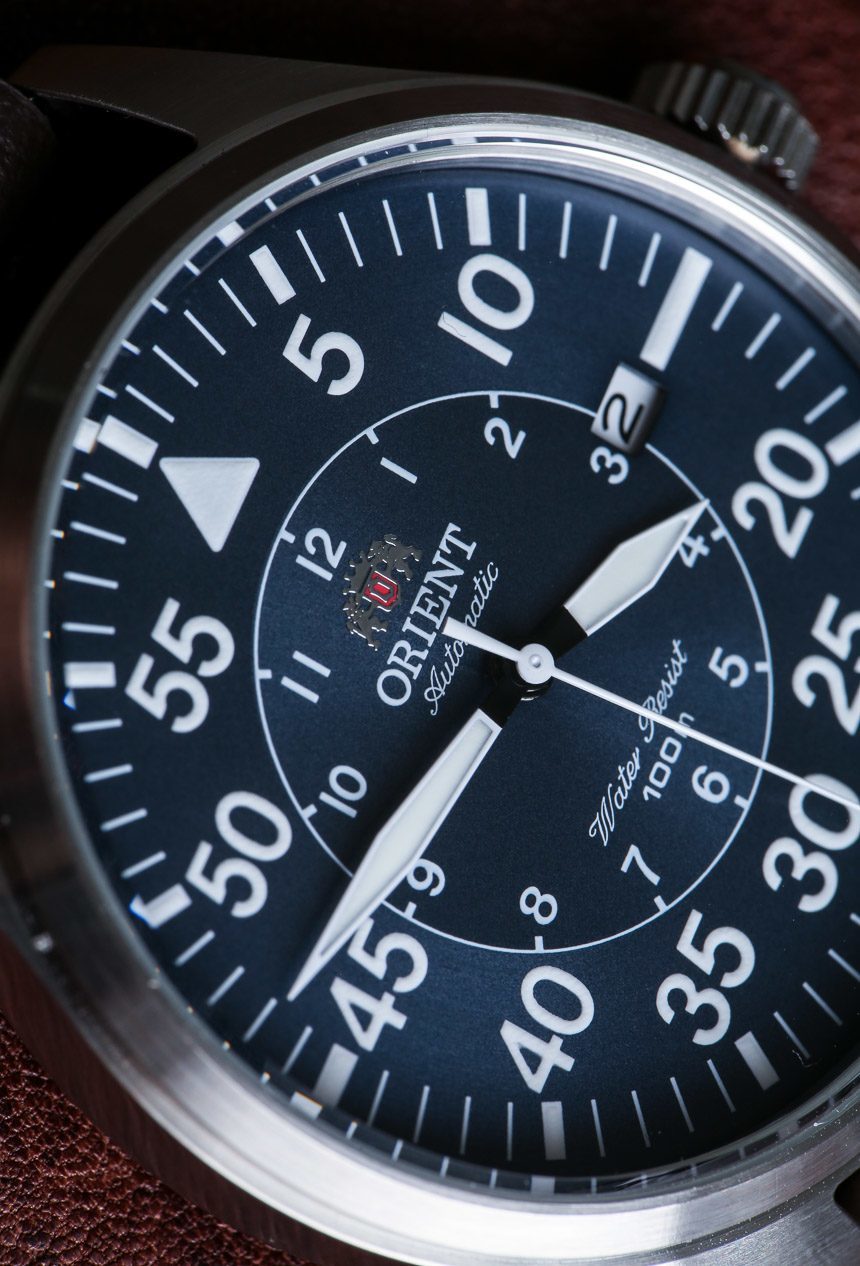 Aside from the cutout for the date window and the slightly raised Orient logo, the Orient Flight dial is mostly flat. Normally I don’t like this, but the lume-painted numerals further add some height to the dial which helps it from looking cheap. In fact, this is one of the least cheap-looking cheap pilot-style watches I’ve come across yet. You certainly get some of that Japanese character on the watch as well in things like the “Water Resist” term on the dial. Orient actually knows that isn’t the best English, but they maintain the phrase because they feel it is aesthetically balanced given its symmetry.

The date window on the dial is remarkably unobtrusive even though the color of the date dial isn’t blue. Though the dial color does go with the large minute markers. If this watch was in the thousands of dollars I would complain that the date window should perhaps be a bit more elegant and have a disc with a matching color to the dial, but it isn’t really that bad and given all the value here it doesn’t really bother me. Some people might even claim the dial would be better without a date window. 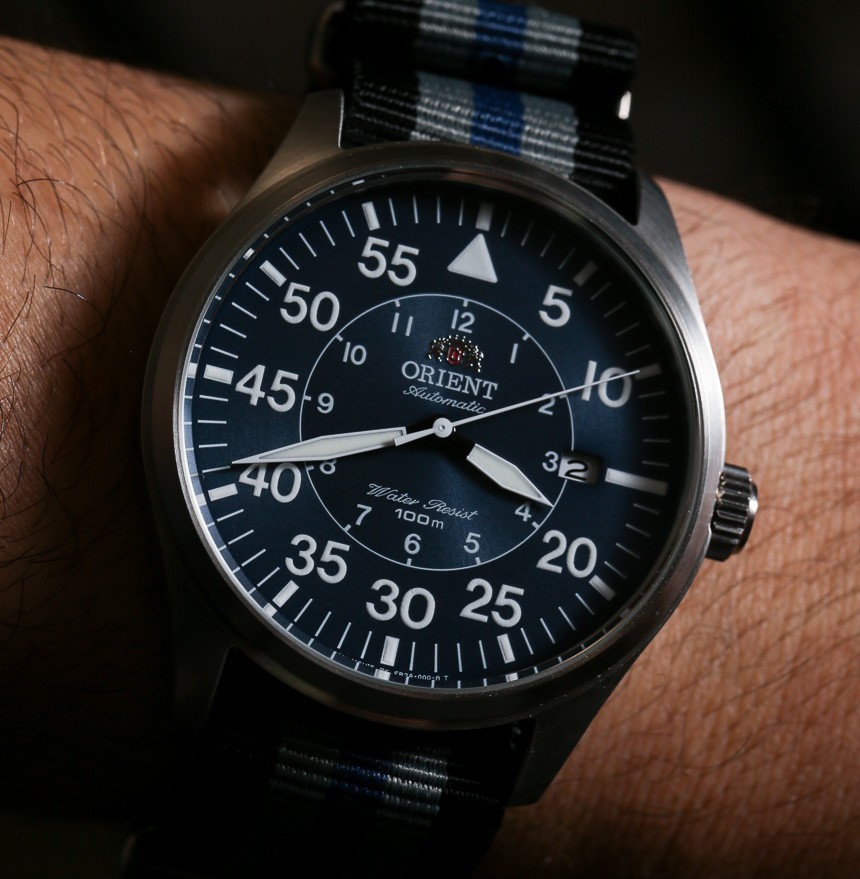 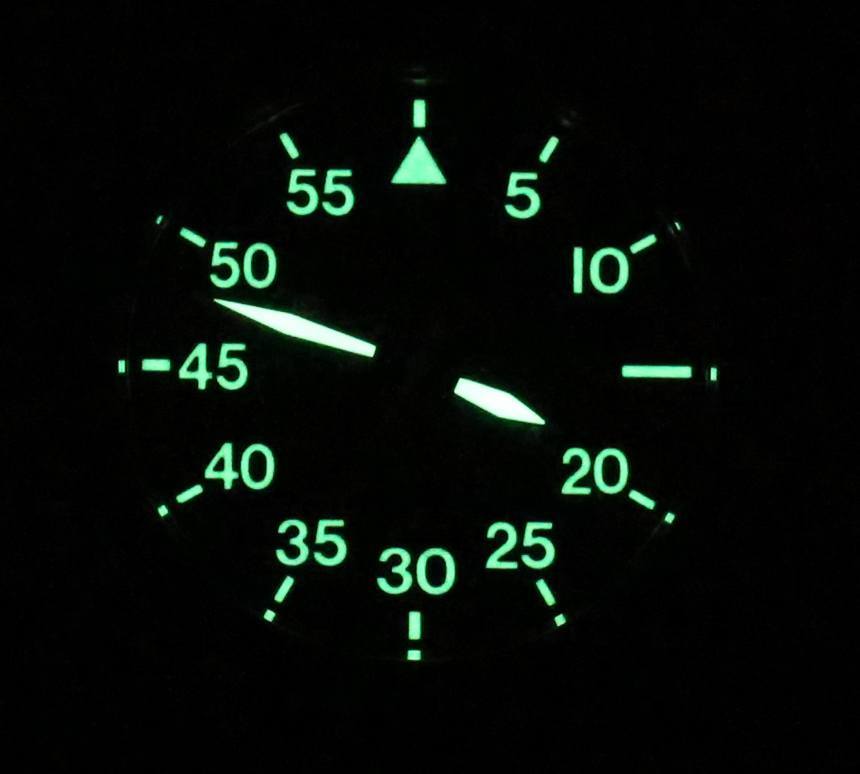 Luminant on the dial was impressive, to say the least. First of all, the luminant paint application was extremely even and well-applied. I don’t believe that Orient uses SuperLumiNova luminant, but theirs isn’t too bad as long as it is applied with enough volume. This isn’t going to be the brightest watch after a few hours in the dark. And it won’t be up there with the best from luxury Swiss brands or even high-end Seikos, but it is more than good enough for the price, and I can’t see anyone reasonably offering serious complaint.

On the wrist, the Orient Flight wears 42mm wide and 12mm thick. I believe that this is the perfect size for a traditional looking aviation watch. Any smaller and they don’t do justice to the fact that, even historically speaking, aviation watches were large. Any larger, and you begin to alienate a lot of wrists. Sure a 44mm or larger pilot watch can look cool, but Orient is more focused on sizes that work for the largest possible audience – so for me, this is a good size. Also note that on a NATO-style strap, watches will tend to wear larger, given how the strap sticks out. 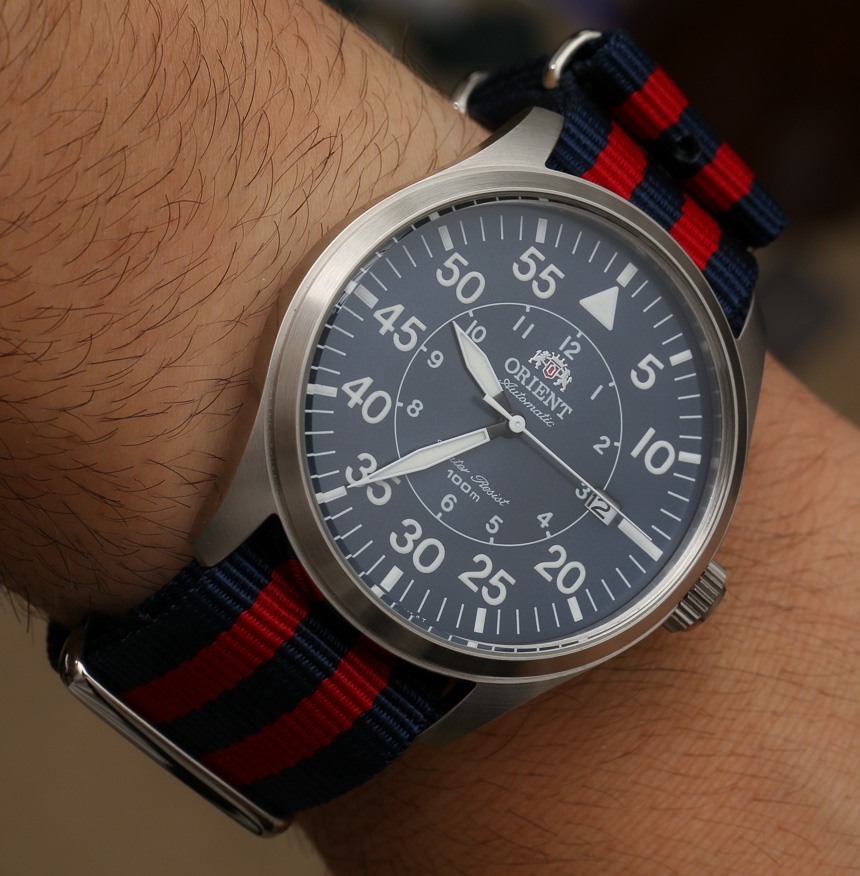