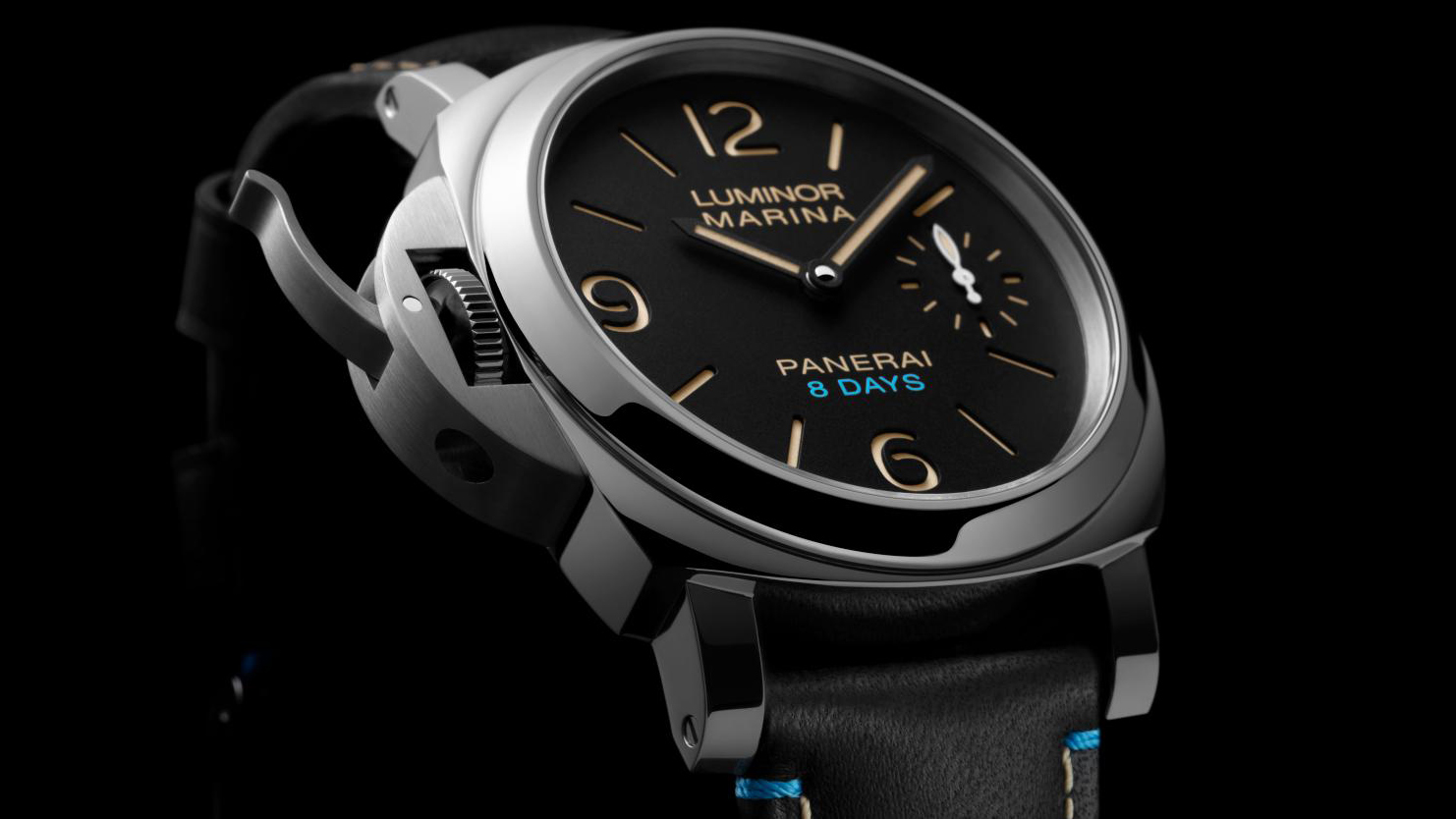 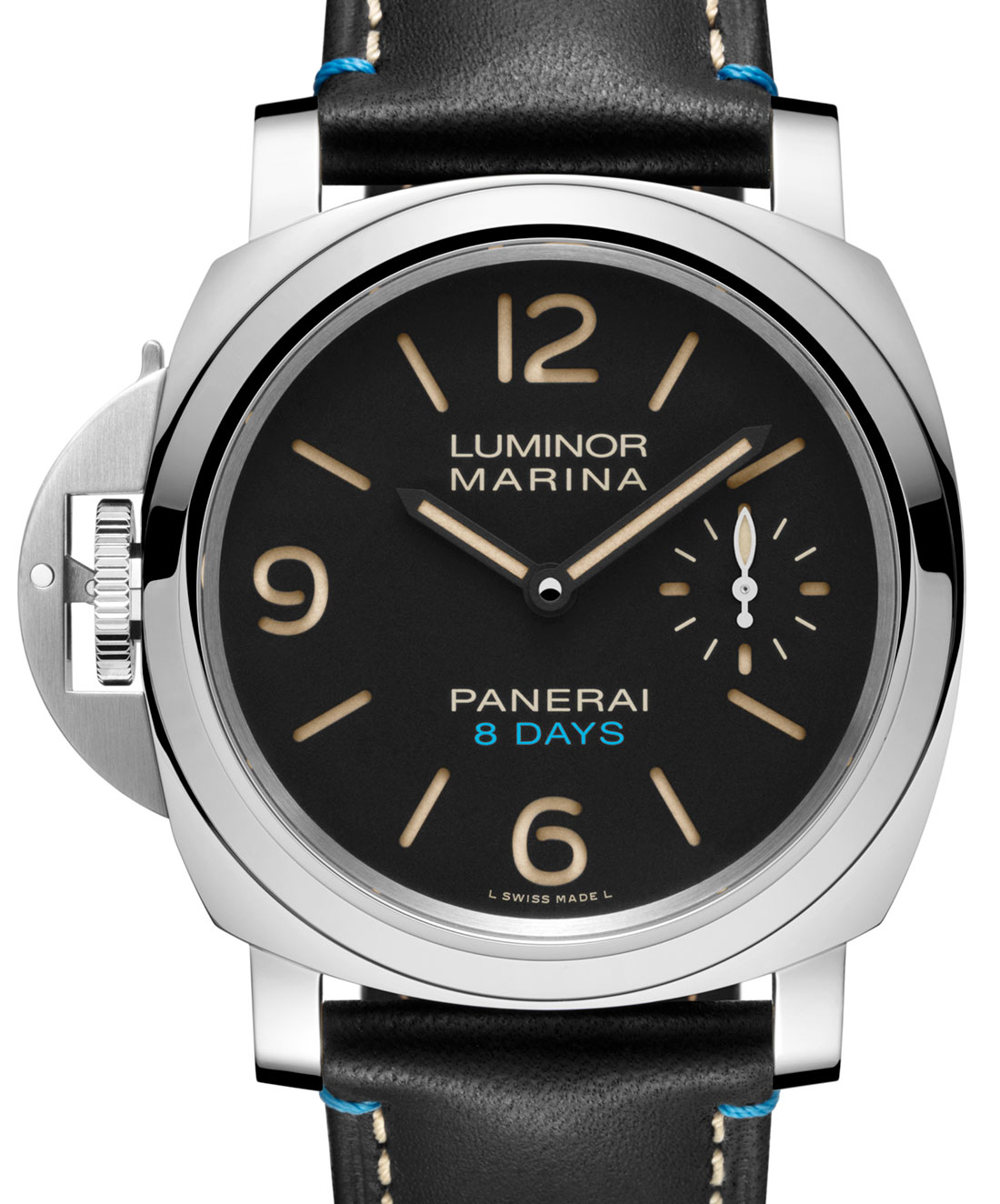 The new Panerai PAM796 Luminor Marina 8-Days Power Reserve Left-Hand is a bit of an amalgamation of traits that Panerai already has pursued — being that it’s a left-handed (crown on the left side of the case) Luminor with an 8-day power reserve. This watch also features Panerai’s recognizable and often sought-after sandwich dial with long, faux vintage patina lumed baton hands and a sub-seconds dial at 3 o’clock. The brand is no stranger to either lefty watches or 8-day power reserves, but the PAM796 features their new in-house caliber P.5001 with an 8-day power reserve indicator prominently displayed under the rear sapphire caseback. The PAM796 also sports 300m of water resistance and a 44mm polished steel case along with a black leather strap to match the dial. 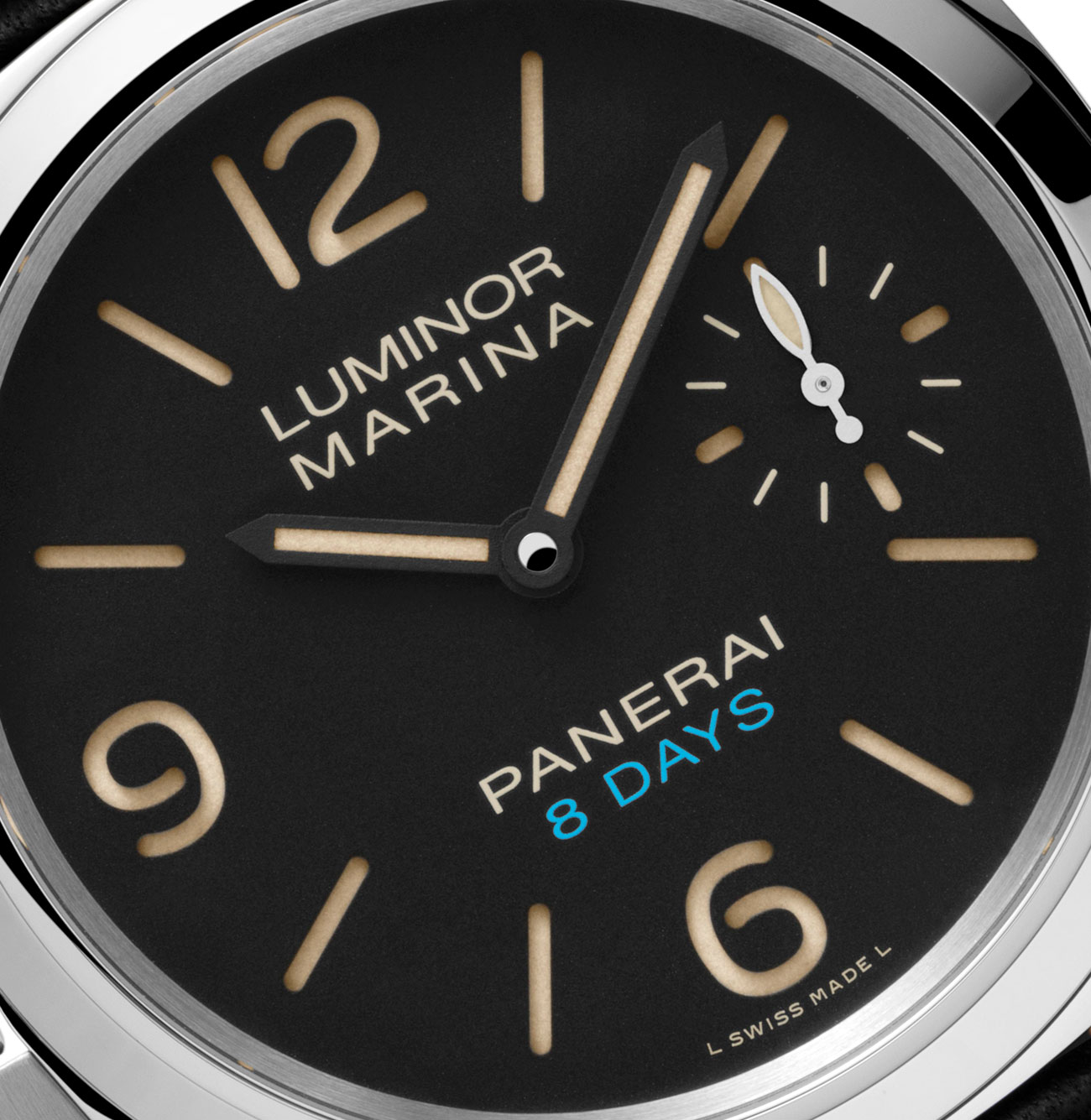 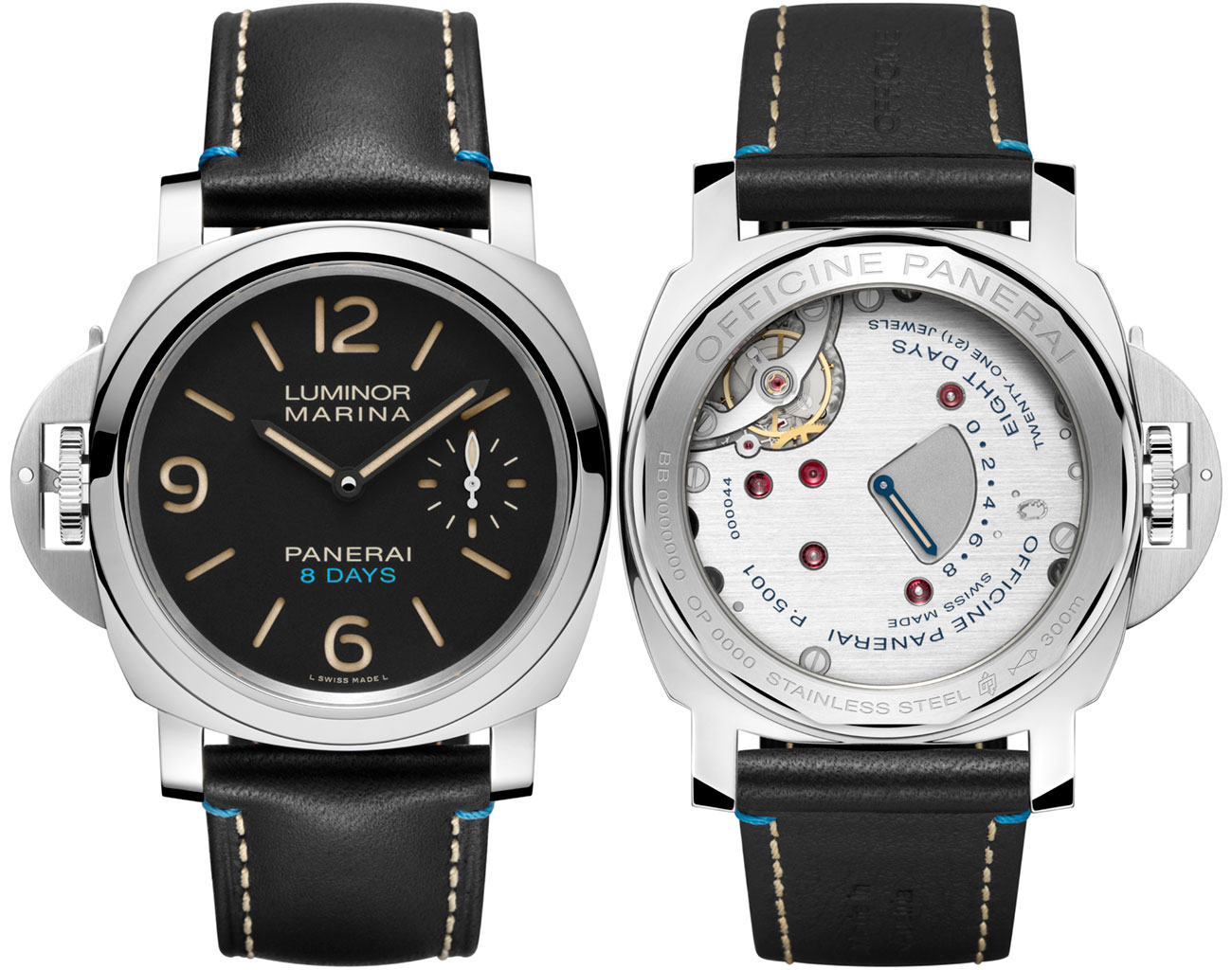 While this is not the first time that Panerai has offered left-handed watches with extra long power reserves (see the PAM579 hands-on here or the PAM368, for example), they don’t currently offer a model in this exact configuration. I think what the ultimate selling point of this particular piece will be is the movement. Panerai states that the P.5001 is, “executed entirely by Panerai,” and functions as a direct descendant of the P.200x series of movements from Neuchâtel; those wanting to buy into that technology will find the PAM796 to be a good candidate. Speaking personally, I also think that the left-handed crown would be extremely comfortable when worn on the left wrist. The signature Luminor crown guard assembly, while being unique and a big draw to the line itself, could potentially pose some comfort issues for potential wearers. Flipping the crown to the left side of the case should alleviate that entirely. 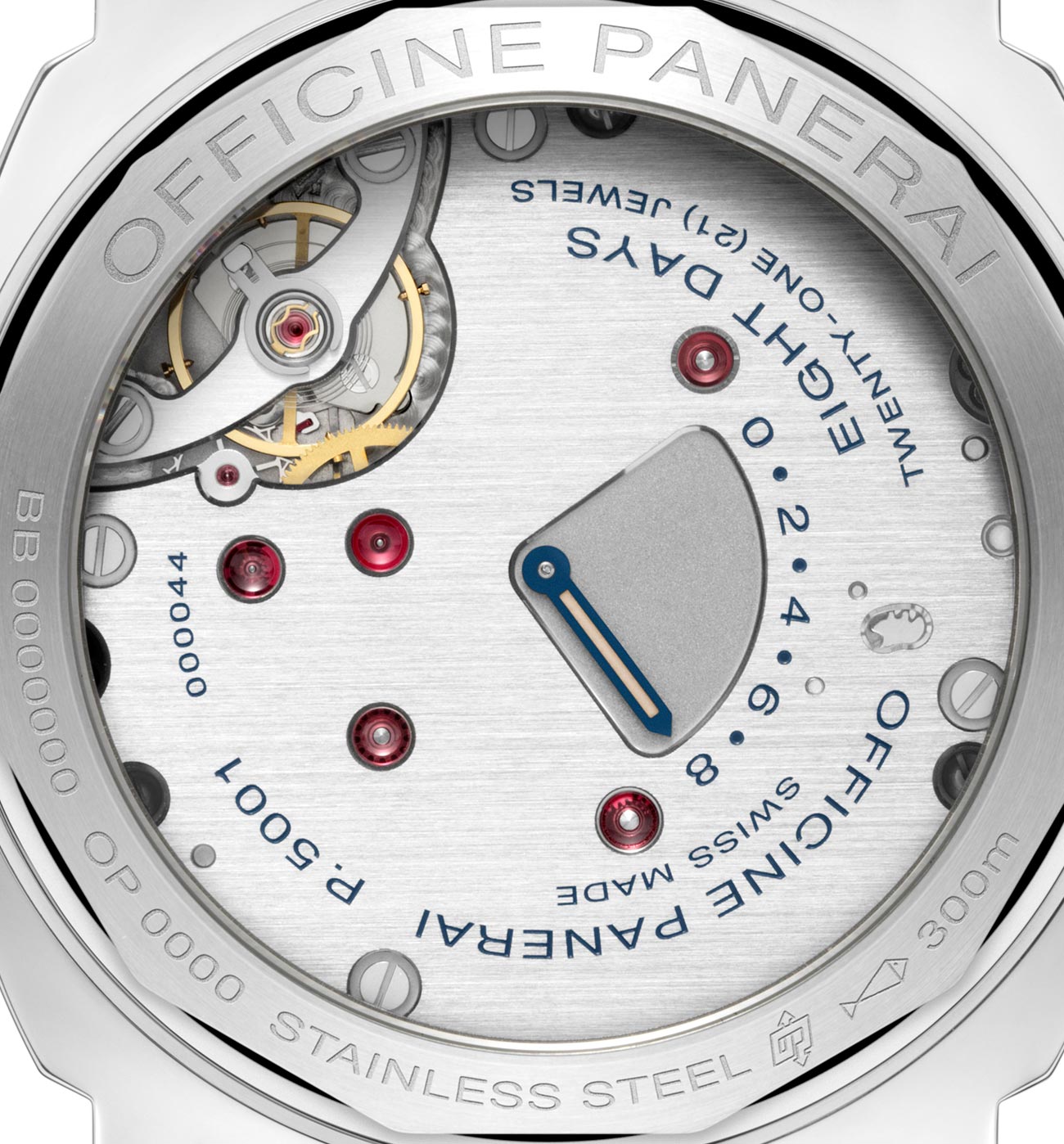 Ultimately I find that the PAM796 represents an appropriate, if not expected step in Panerai’s development. One nice thing is that they have brought the cost of entry to their (specifically) left-handed, 8-day movements down to just under $7,000, whereas previously they were over $10,000. This might appeal to those looking to buy into the Italian Frogmen heritage for the first time, or just the combination of features, style, and price that they were waiting for. On the other hand, I see this as an expected move because, in the end, it is another vintage-inspired Luminor featuring a complication that we know they can already accomplish. I would love to see Panerai introduce a new case style altogether and begin designing some “new” heritage for future owners. The Panerai Luminor Marina 8-Days Power Reserve Left-Hand PAM796 will be available at a retail price of $6,900. panerai.com