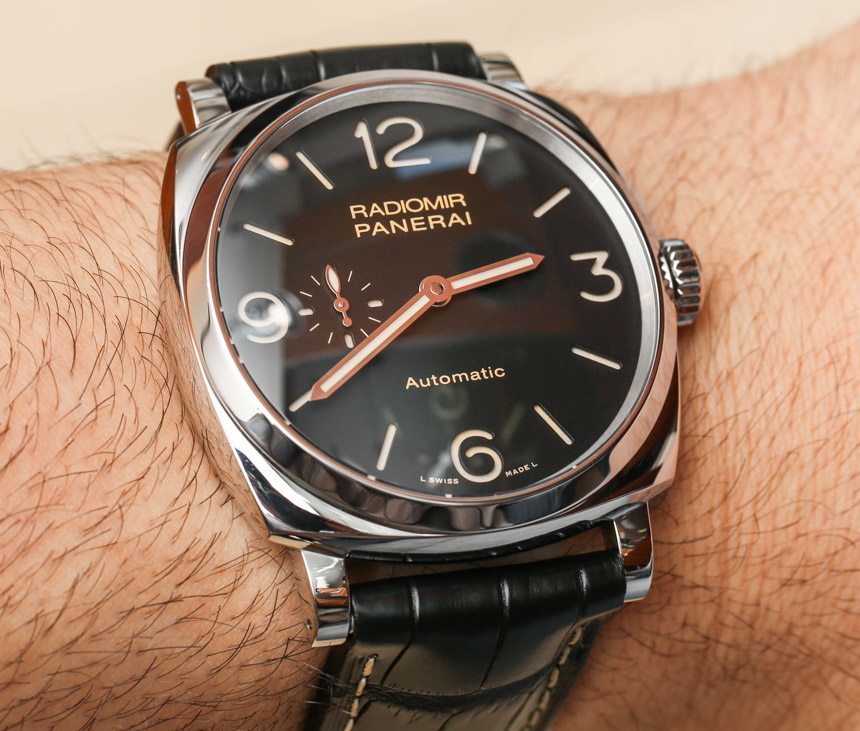 In-house movements are still very much “in” (pardon the pun), and one of the latest additions to the ever-growing array of proprietary Swiss calibers is one that was designed and is manufactured by Panerai. Today, we will be discussing the more interesting details of the P.4000 movement and also one of the models in which it made its debut, the Panerai Radiomir 1940 3 Days Automatic PAM572. We will begin with a closer look at the P.4000 movement, and then go hands-on with this old-new Radiomir, which was given the privilege of first accommodating it. 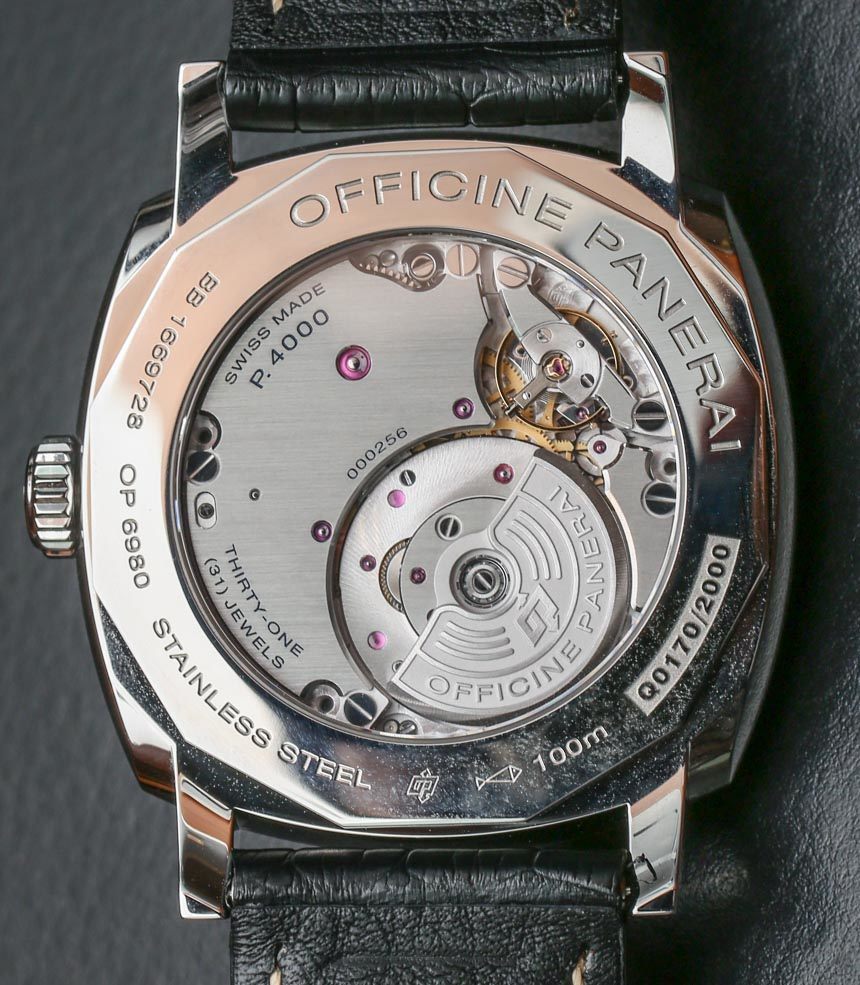 Over the last couple years – as the arms race of proprietary movements has been heating up – we have seen more than a handful of rather pointless “new” and “in-house” movements that offered little to nothing valuable either for the brand, or for the end consumer – other than bragging rights, that is. Many (quite rightfully, we should say) argued that if the brands did actually put all that investment and effort into creating their new movements, they should at least offer something new and practically useful – which of course happened in numerous, but by no means all, of the instances.

In 2014, Panerai debuted a new time-only movement called the P.4000, which offers nothing but the hours, minutes and small seconds, as well as automatic winding – although we would not be surprised if Panerai later added more functions to this base caliber. What makes the P.4000 stand out from the rest of the brand’s other calibers is that it is Panerai’s first in-house movement with an off-center winding rotor; and while that may not sound like that big of a big deal, the micro-rotor still is a seldom seen – although, as we will see, very handy – feature. 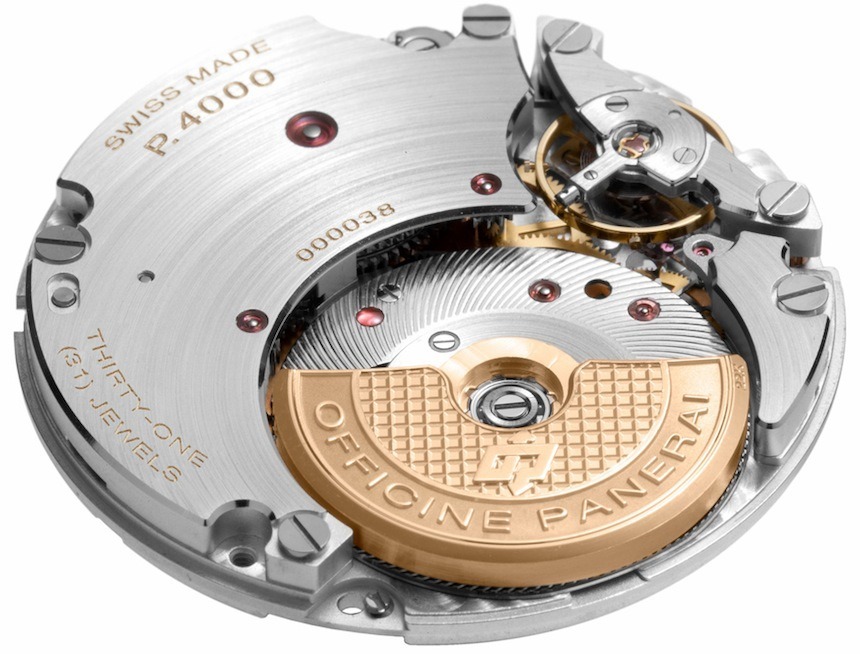 With the P.4000, Panerai managed to create a new caliber that does more than just allow the engineers to stretch their muscles a bit. The P.4000, thanks to its bi-directionally winding micro-rotor. which is literally sunken into the plane of the movement’s top plate, is a mere 3.95 millimeter thin, which for an automatic movement, really is a very compact size. This, as we shall see, directly (and very positively) affects the overall thickness of the watch to which it is fitted.

Alright, we have established the new movement is thin, but what renders it a genuinely modern and more sophisticated design is that it achieves this without any major sacrifices: the P.4000 offers at least 72 hours of power reserve (as per Panerai’s claims) thanks to its double barrel system, runs at 28,800 vibrations per hour, and has a hacking function. If we forgive the lack of a date or any other more complicated functionality – which is fine, since we are in fact looking at a base caliber here – the P.4000 crams a lot of practically useful features into a compact sized movement. 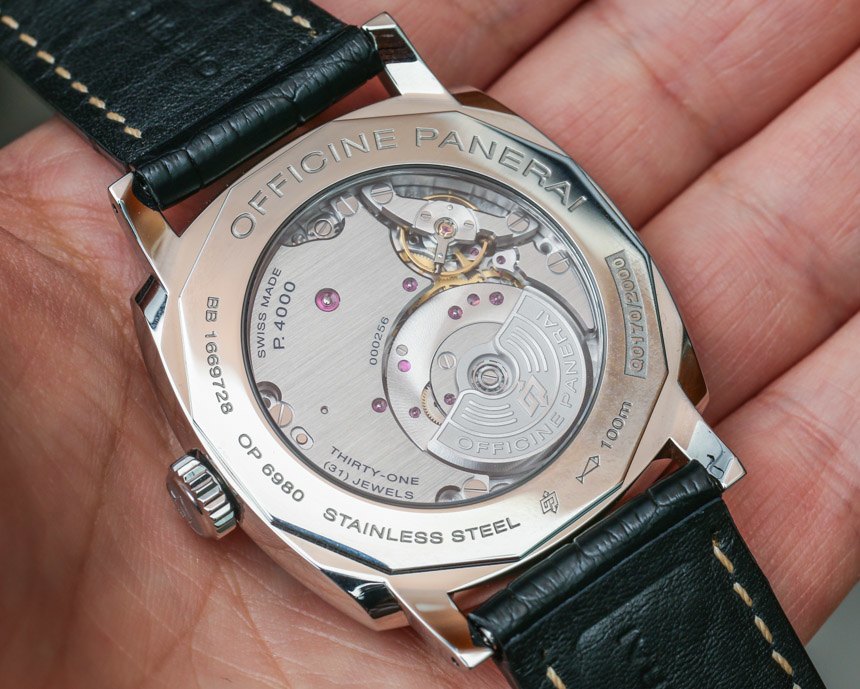 Panerai will offer the new caliber in two variations, depending on the case material of the watch the movement is fitted to. For stainless steel watches (which presently is the PAM572), the movement has a tungsten alloy rotor with relief decorations and horizontally brushed bridges, while gold watches (the PAM573, at this point) will have circular brushed finishing and a micro-rotor in 22k red gold with clous de Paris hobnail finishing.

The new movement follows suit in terms of general design and, much like previous in-house made movements by Panerai, does away with traditional movement layouts and decorations. Instead, it is a blend of industrial design with a few curved edges here and there for better aesthetic balance. While the P.4000 is technically very impressive and also delivers in the decorations’ department, there are other in-house movements out there on the market which arguably do a better job at being a “watch lover’s watch movement,” thanks to their more traditional design elements. That being said, seeing Panerai choose and follow its own design DNA when it comes to its new movements is a respectable development: like the brand itself, it offers a more unusual alternative that will certainly not be for everyone – but it hits just the right tones for many, allowing the brand to enjoy the love of its cult following. 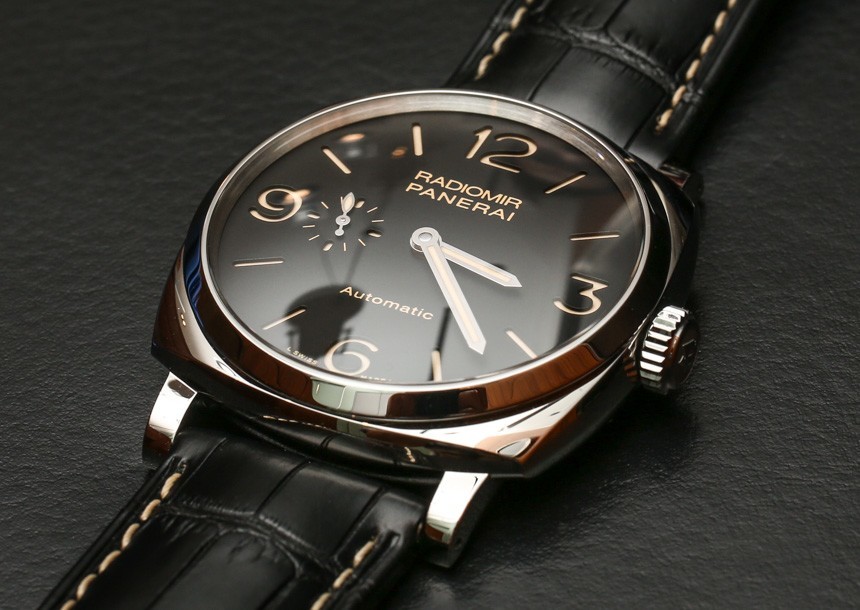 It is no news that the thinness of a movement greatly affects the size of the case it is fitted to, but it is here where the P.4000 really shines. In 2013, Panerai debuted the Radiomir 1940 collection with a hand-wound movement (the 3.4 millimeter thick P.999), which suited the slim and more elegant profile of the old-new Radiomir 1940 case beautifully. When I say old-new, I refer to the history of this particular case design. As the story goes, Panerai finalized this version of the Radiomir in around 1940 (hence the name), when it replaced the soldered-on wire lugs of the original to the much sturdier straight lug layout. With this new design, the lugs and the middle section of the case were milled from the same piece of metal, creating a virtually inseparable and hence much more durable bond between the lugs and the case.

Furthermore, it allowed Panerai to drill the lugs and allow the strap to be fitted with a removable bar, whereas in the case of the wired lugs, the straps had to be sawed around the lugs, making replacements much more difficult and time consuming. The result was a structurally stronger lug design with a more integrated aesthetic. Quite unreasonably, Panerai notes that the original Radiomir 1940 case was 15 millimeter thick, but fails to mention in any and all of its official communication exactly how much thinner the 2013-2014 Panerai Radiomir 1940 3 Days Automatic PAM572 actually is, so we reached out to them and learned that the 572 comes in at 12.2 millimeters in thickness. 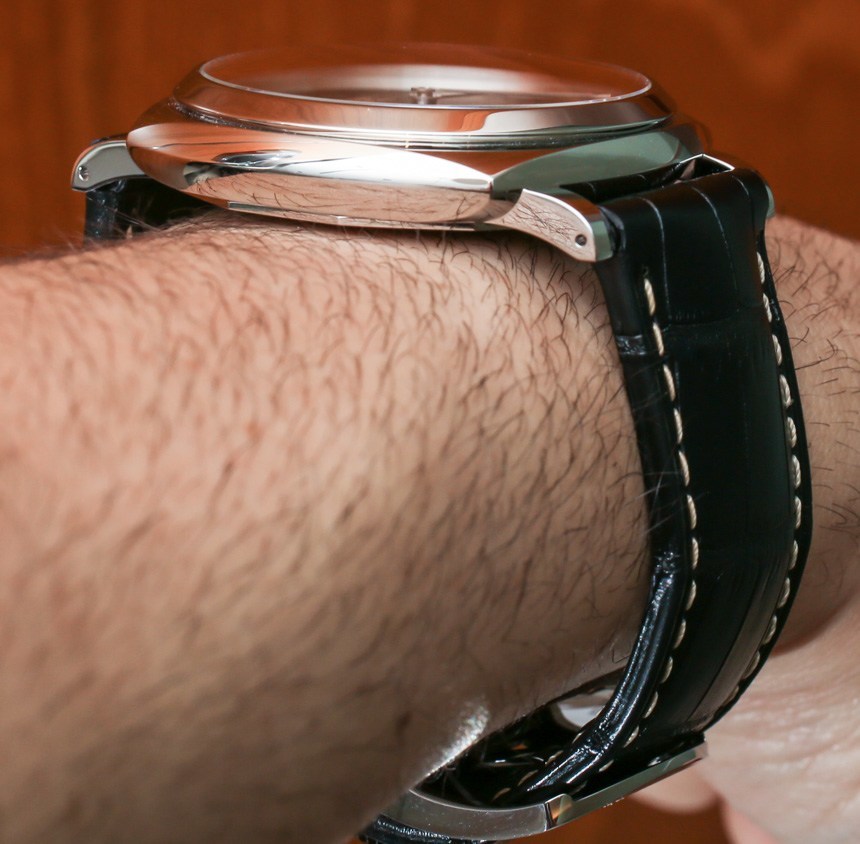 While that is by no means thin by normal watch standards, the Panerai Radiomir 1940 3 Days Automatic PAM572 is among the very few properly thin Panerais available today, and this 2013 re-release, with a more restrained dial design, tries to make the most of this feat. In other words, the PAM572 is among Panerai’s best bets to offer something to people looking for a watch that is unmistakably Panerai but is thin and restrained enough to also work great with a suit and tie. In 2013, they debuted the collection with the PAM512 (steel) and PAM513 (red gold), a reference that had a very plain dial and a more conservative 42mm-wide case. 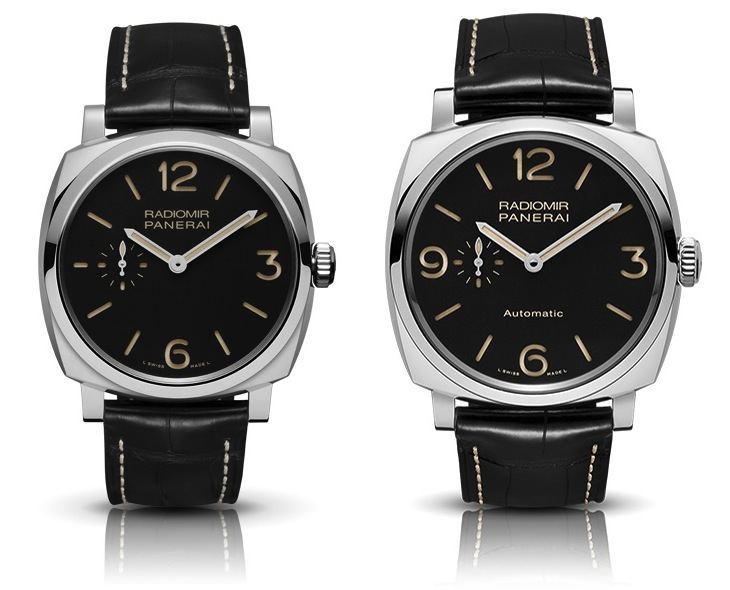 With the PAM572 and PAM573 automatic winding versions, however, Panerai went for a larger, 45 millimeter wide case and put the designation “Automatic” on the dial, somewhat further above the 6 o’clock position. For those not content with the 42mm version, the 3mm enlargement may be a welcome modification, but from a design perspective, it does make for a considerably altered look. Panerai ditched the more conservative and quite well-balanced appearance of the 42mm version of last year in favor of something larger and bolder – which also happens to have received the P.4000 automatic movement. 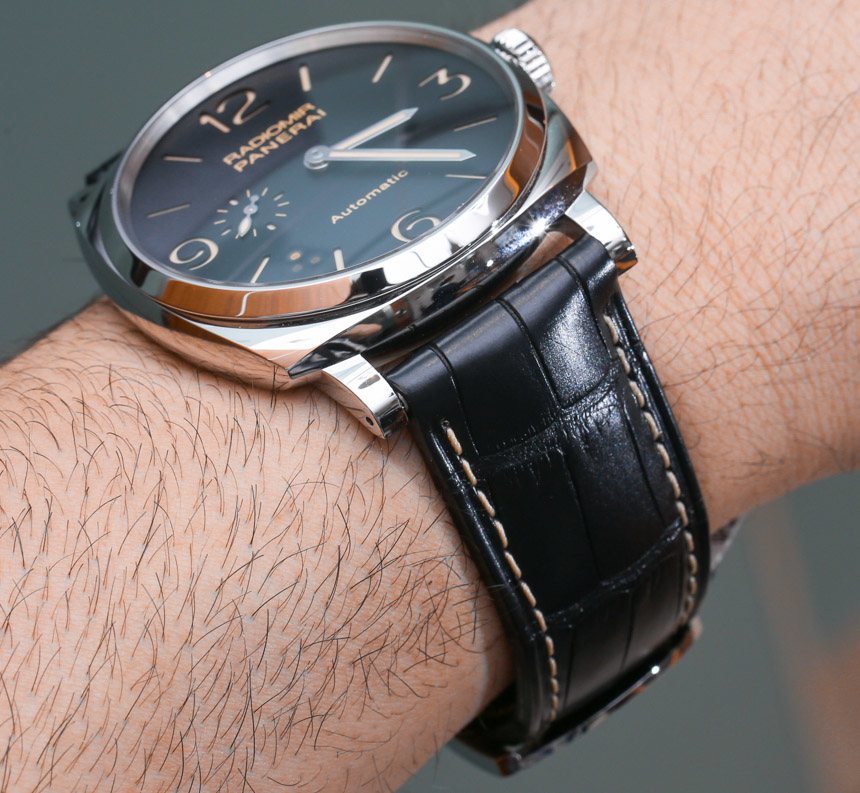 The consequences are not unexpected: the larger PAM572 carries a lot more heft than its predecessor, as the larger case and wider dial demands much greater presence on the wrist. It is, nonetheless, slim, and the curved profile and angled lugs also help make it look less out of place even on small-to-normal sized wrists. Despite the borderline archaic theme and name, the large “sandwich” dial and its more simple three-hand configuration is covered by a 1.7 millimeter thick sapphire crystal – no plexi, or other more “historic” material here. 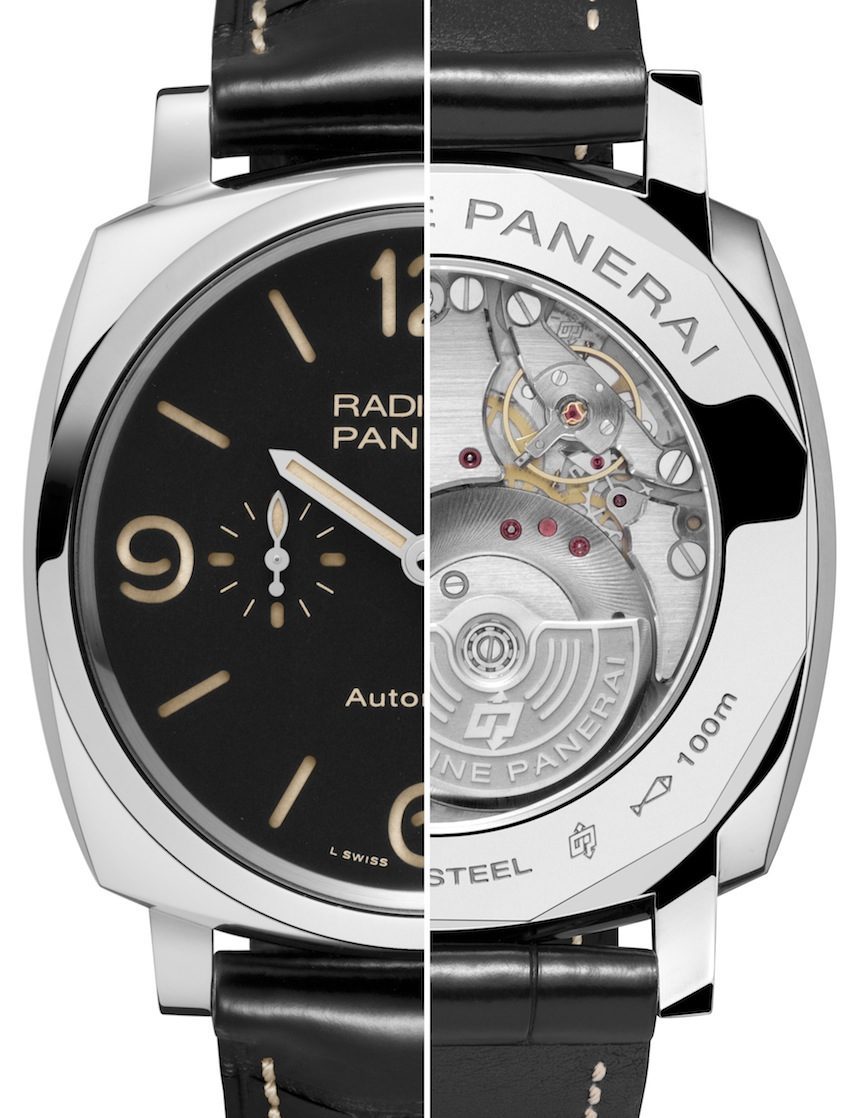 To summarize, we will say that the Panerai Radiomir 1940 3 Days Automatic PAM572 offers a number of interesting and relatively unique developments over its more prevalent siblings within the Radiomir line of Panerai watches. It offers the more modern-looking straight lugs, which are structurally integral to the middle section of the case, and pairs the slim design of the case with a new manufacture movement, the P.4000.

All this makes for a strong package – especially if one prefers the larger, 45mm wide size and the somewhat more crowded-looking dial – but that package comes at a price: The Panerai Radiomir 1940 3 Days Automatic PAM572 in steel is $11,600, while the PAM573 in red gold is priced at $25,800. panerai.com