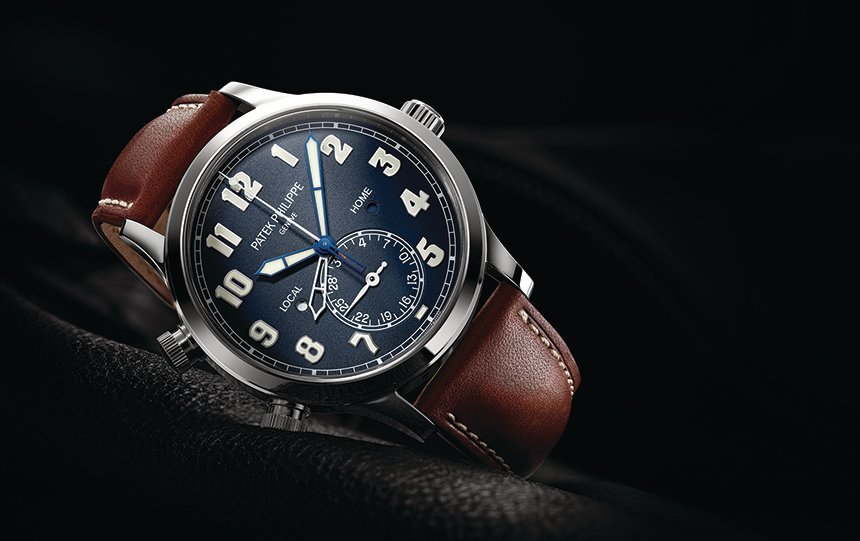 What you are looking at here is the new Patek Philippe Calatrava Pilot Travel Time Ref. 5524 introduced at Baselworld 2015. Yes, it is an unmistakably pilot-style watch from Patek Philippe. Your eyes are not kidding you.

Patek Philippe has got to be one of the most unpredictable brands in recent times. Most recently, the company announced that it would revise its prices and that resulted in most regions receiving price cuts. Although this is not the first time Patek Philippe has done so, it comes at a time when the Swiss Franc has appreciated significantly and other powerhouses like Rolex and Audemars Piguet have increased their prices. And at Baselworld 2014 last year, it released a high-complication steel watch, the Annual Calendar Chronograph Ref. 5960 (hands-on). That was a watch that caught everyone off guard and got everyone excited, and this year, Patek Philippe is at it again.

Provenance is, of course, extremely crucial when it comes to high-end watchmaking, and before you dismiss the new Patek Philippe Calatrava Pilot Travel Time Ref. 5524, it is important to know that Patek Philippe does have a history of making pilot watches, and for military use, to boot. Before the Second World War, in the 1930s, Patek Philippe did in fact manufacture pilot watches for specific military use. These special watches were known as “hour-angle” watches, and they had hour hands that would go round the dial once every 24 hours, and as they did, they would also point to the degrees of arc that were marked on the dial. This supposedly aided navigation. One of these watches was auctioned by Christies in 2009 for over $1.7 million. 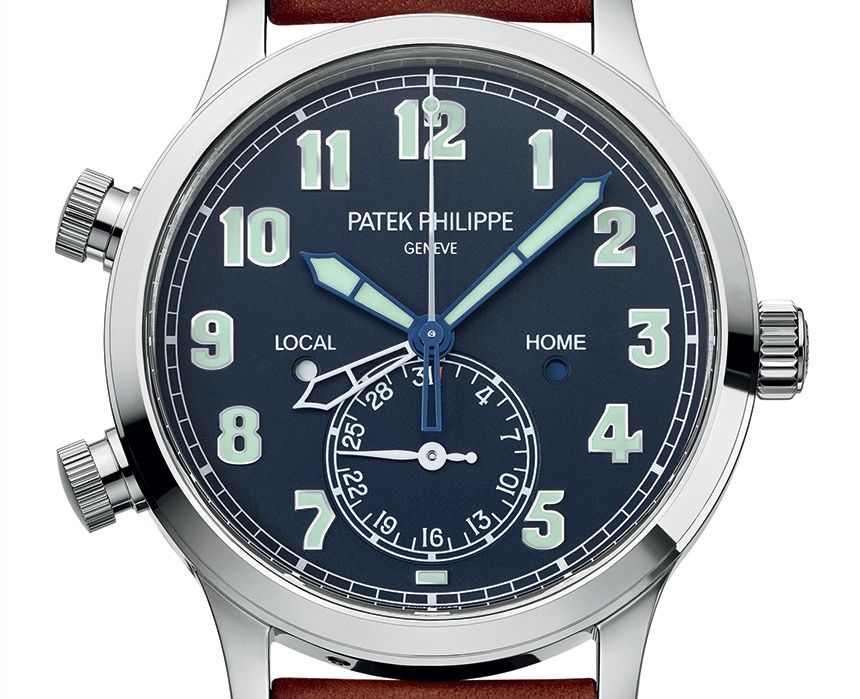 So with the pedigree of the new Patek Philippe Calatrava Pilot Time Ref. 5524 firmly established, let us now take a closer look at the watch. Unlike most pilot watches, the Patek Philippe Calatrava Pilot Travel Time Ref. 5524 has a dark navy blue dial with grained finishing, and also matching blue hours and minute hands. The hands for the second timezone is skeletonized. The large arabic numerals are applied white gold markers, filled with SuperLuminova, as are the hours and minutes hands – the hand for the second timezone is not. At 6 o’clock is a large date subdial, and flanking it are apertures that serve as day/night indicators for the two timezones. The layout is very sensible and legible. 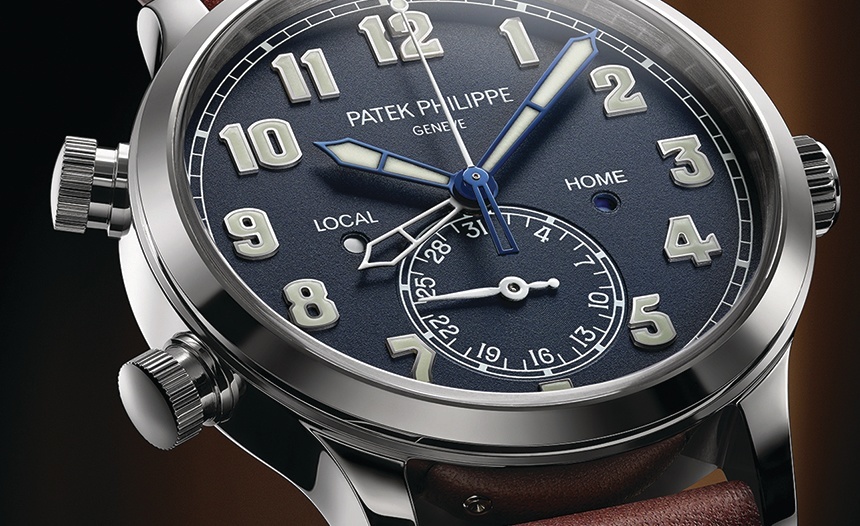 The case is 42mm wide, rendered in white gold, and is fully mirror polished. The big unguarded crown sits at 3 o’clock and at 8 and 10 o’clock you have thick-looking pushers that are used to adjust local time. These pushers also feature patent-pending safety locks to prevent the wearer from unintentionally adjusting the time. The pushers must be released first with a quarter turn before they can be activated, and once adjustment is done, the wearer can lock the pushers in place by turning in the opposite direction.

Enabling all of this is Patek Philippe’s caliber CH 324 S C FUS, a 294 part self-winding movement that features Patek Philippe’s special Gyromax balance and Spiromax spring, both made out of Silvinar, Patek Philippe’s own special blend of silicon. The movement is visible through the sapphire case back, and as you would expect, beautifully finished with chamfered bridges, Geneva striping, perlage, snailed flanks and a large circular-grained 21k gold rotor. The movement is also certified with the Patek Philippe Seal – this means it is rigorously regulated to a tolerance of just -3/+2 seconds a day. 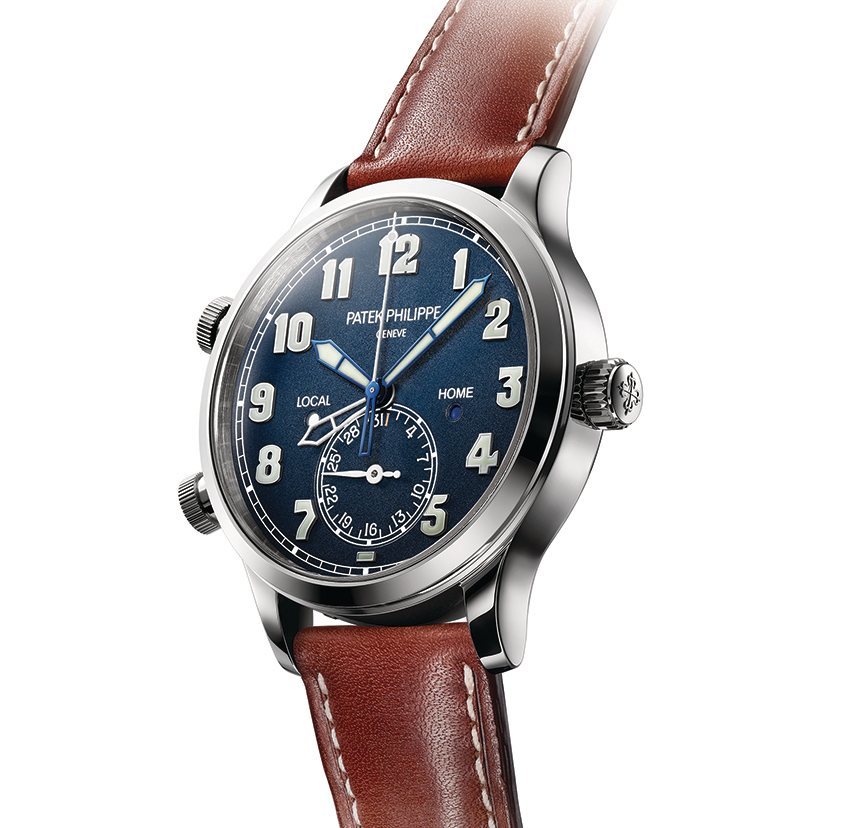 The watch is paired with a vintage brown calfskin strap and comes with what Patek Philippe calls a clevis prong buckle, which is made with white gold, of course. According to Patek Philippe, this was inspired by the harnesses worn by pilots that kept their survival kits and parachutes readily deployable without hampering their freedom of movement.

I think it is safe to say that this is easily one of Patek Philippe’s most interesting and unusual new releases in a long time, and it will certainly divide opinions. However, it can also be interpreted as a sign that the brand is ready to break out of its mold and try on new things, and this can only be a good thing for all watch enthusiasts. The Patek Philippe Calatrava Pilot Travel Time Ref. 5524 is priced at 42,000 CHF. patek.com