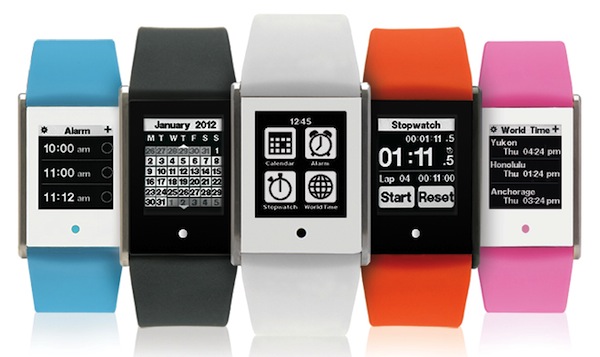 If you are in need of any additional proof that Kickstarter is a great place to fund the development of a new watch, look no further than the Touch Time project from California based Phosphor Watches. Phosphor is well-known for their innovative digital watches which often feature E Ink (e-Ink) displays and have a sense of eye-catching charm. On August 6th, 2012 Donald Brewer and the team at Phosphor launched a Kickstarter project for their newest design, dubbed “Touch Time”. Within 24 hours they had reached their $50,000 goal and, as of the time of posting, they have over 1000 backers and well over $125,000 in funding. Perhaps this is not surprising given the success of other watch projects such as the Pebble. Nevertheless it is further evidence that the Kickstarter crowd really loves watches.

The Touch Time is a digital watch that offers a series of features including an alarm, stopwatch, reminders, world time, calendar, calculator and moon-phase which are all controlled via a touch screen interface. Unlike other recent and very popular Kickstarter projects, Touch Time is not a “Smart watch” as it does not connect to your smartphone, nor does it need to be consistently recharged as power is sourced by a conventional lithium cell battery.

Touch Time is built into a conventional and minimalist watch design with a 34mm wide stainless steel case which is a little less than 11mm thick. Backers (the name for people who fund projects on Kickstarter) are able to choose from a series of colorful straps or even stainless steel bracelet options to suit their tastes. The Touch Time has no conventional buttons, instead opting for a capacitive touch interface used in conjunction with its 144 x 168 “always on” LCD display (with back light). 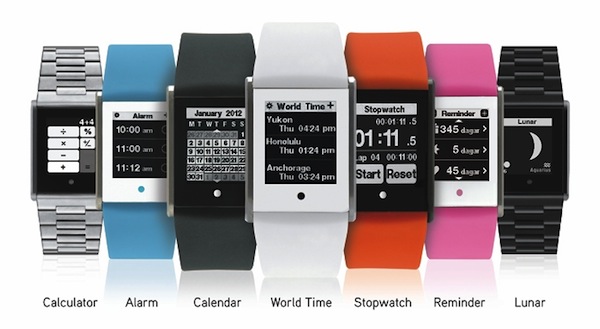 Donald Brewer (Founder and President of Phosphor Watches) was kind enough to answer a few of our questions about the Touch Time:

aBtR: Can you give us some background on the Touch Time project? What led to this design? What needs consumer does this new model fill?
DB: The majority of the estimated $1B of digital watches sold today look about the same and use the same technology as they did in 1983. If there was ever a reason why folks often say that watch category is declining, it is due to the fact that it isn’t keeping up with consumer electronics like smartphones and tablets. I believe that thanks to touchscreens and high resolution displays, in the next few years we can see a major update on what a digital watch is and what technologies they use, and overall make for an improved watch. No one has a cellphone from the mid-1980s, why then do we use digital watches of that era?

aBtR: Phosphor is a successful brand with a wide product lineup, why use Kickstarter for the Touch Time project?
DB: Phosphor is still a small, but growing brand. Being able to fund the project on Kickstarter is great way for a company like ours to bring to market a pretty challenging product to develop, but one that I think the market has been waiting for.

aBtR: What makes the Touch Time different than one of Phosphor’s other watches, or from a conventional digital watch?
DB: It is an update on what a digital watch should be. Although Phosphor has other innovative products, this one is specifically targeted at the large audience of current digital watch buyers.

aBtR: Do you think the Touch Time will appeal to people who generally dismiss digital watches and, if so, why?
DB: I think so. I think it [Touch Time] is what a digital watch should be as it provides more information and functionality that is far easier to use with the capacitive touchscreen interface than current digital watches which are difficult to use and have minimal functionality. 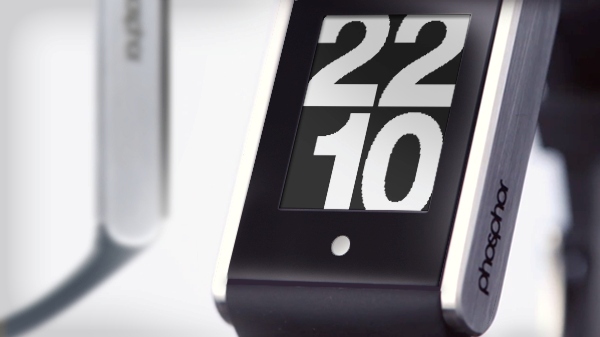 aBtR: Why not make a “Smartwatch” like so many other brands on Kickstarter?
DB: The current digital watch market is about $1 billion annually, and the current Smartwatch market is much, much smaller. I think that use of touchscreen and high resolution displays can represent a major disruption to conventional digital watch markets. In addition, all of the Smartwatches in the market today have battery life of 5-7 days. Having done very early Smartwatches with Microsoft SPOT and PALM many years ago, I am convinced that the majority of consumers don’t want a rechargeable watch to use everyday. We have a enough products in our life that we have to worry about recharging, a watch shouldn’t be one of them. Touch Time has a battery life of more than one year.

aBtR: What is your favorite feature or capability of the Touch Time?
DB: To be honest, the simple-to-use touch interface makes all of the features better. To be able to set an Alarm, Time, and a Reminder with a few swipes on a scroll wheel, versus a typical digital watch where you’d have to read a manual, is simply the way it should be. Of course to also be able to change to different dial faces with a swipe of a finger is one of the most compelling features.

aBtR: Many readers will know Phosphor for its use of E INK displays on models like the World Timer, why was E INK not used for the Touch Time?
DB: We are huge fans of E INK and we are the only watch manufacturer currently making watches with that display technology. On this particular project we needed a display which had a higher resolution on a small screen size than E INK displays are currently able to do.

aBtR: Will it be possible to update a Touch Time watch with new features or updated software?
DB: Currently, like any digital watch the Touch Time will ship with all of its code built-in. Not upgradeable by a customer at this time.

aBtR: The Touch Time has already greatly exceeded its goal with over 1000 backers, what’s next for Phosphor?
DB: First we are anxious to get this product shipping and in the hands of all of our Kickstarter supporters, and in 2013 introduce this product into major chains/resellers to make a lasting impact in the watch market. After that, we have some new exciting ideas…

Phosphor has put their spin on the relatively new “Smartwatch” scene by designing something closer to an anti-smartwatch. As interesting and promising as smart watches look, the syncing and charging aspect is definitely a roadblock for some buyers that simply want a reliable and simple watch with some truly useful features. Plus, with the majority of new Smartwatches you will need a Bluetooth profile 4.0 capable phone. The results of the Touch Time Kickstarter project are already very positive and it seems that Phosphor may have struck gold in an attempt to update the digital watch archetype for a more modern wrist.

We really like how this project is shaping up and are excited to see just how much funding can be raised before the project closes on September 30th. As mentioned in the review, backers can get the basic model with a stainless steel case and silicone strap for $99. After the cut-off date, pricing will rise to $159 for the base model so interested people should make their way over to the Touch Time Kickstarter project page here and reserve their watch.