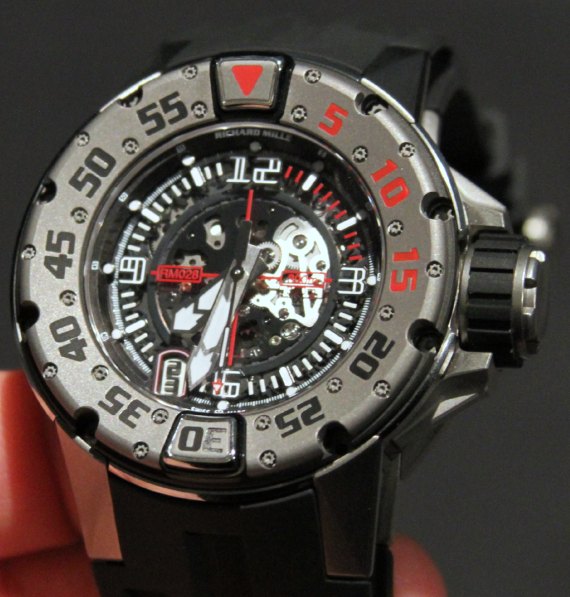 The king of bling this is not, the king of cool, this just might be. I was giddy like a school boy to be playing with the Richard Mille RM028 watch. This is the more ‘reasonable’ version of their diving watch line. The earlier RM025 Tourbillon Chronograph Diver is almost a cosmic joke being a half million dollar diving watch. It also doesn’t have the pure energy that a watch like this has. The irony of an ultra complex sport watch is that you still need to be relatively delicate with it. While this applies much less to Richard Mille watches with their high level of durability, it is still an issue when you want to be a bit abusive to your luxury companion. In the end, this is probably the most expensive dive watch around that just has the time and date.

The RM028 is a good mix between style and function. It wears comfortably and looks like a futuristic instrument much more than it does a traditional diver watch (aka, Rolex submariner). Though all the items are in the right place, the 300 meters water resistant case conforms to necessary dive watch standards, and it has a rotating diver’s bezel. The bezel is actually interesting. First it has an almost humorous amount of torx screws in it. Seriously, look at it. And they are all in titanium. To rotate the bezel you need to press down to buttons. These are actually on the top side of the bezel and are the 60 and 30 minute indicators. You can push each of them down with fingers on the same hand and move the bezel around. It is pretty neat. 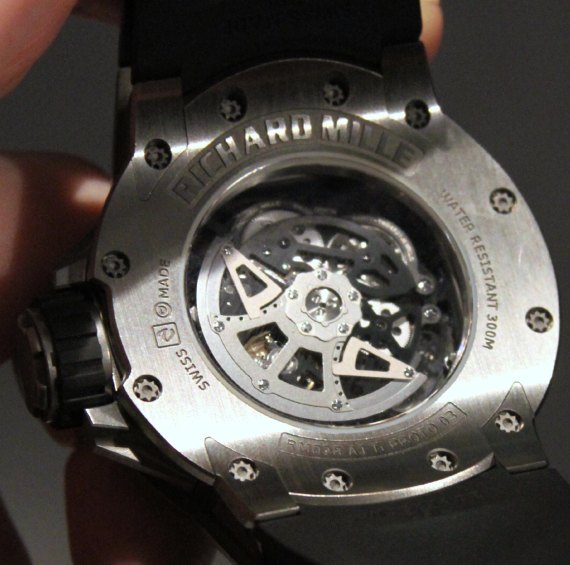 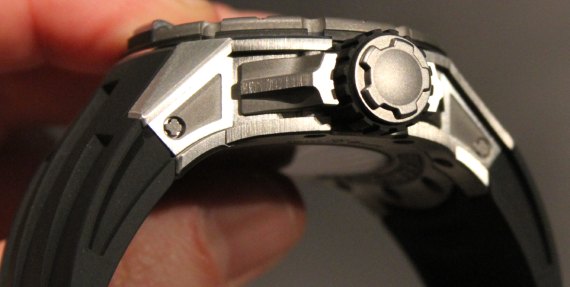 At 47mm wide the case is respectable in stature and made from mostly titanium. This is actually the material of course in the whole watch. Titanium is used in the movement, the case, and for most of the screws. There is even a label on the side of the case that just says “Titanium.” As such, the case isn’t very heavy at all. Look at the bottom of the case and you’ll see that it is even curved for a comfy fit on the wrist. The rubber strap is the highest grade rubber out there as I hear, and is fitted nicely to the case. It is comfortable to use, and there is a matching Richard Mille signed titanium buckle.

Richard Mille knows how to make a polished case, and by that I mean one looks impeccably made. A man with an eye for details, he sincerely “gets” the passion behind expensive watches that is required to make them desirable, no matter the cost. While there is nothing simple about the dial, it is among the most simple dials available in the brand at this time. Functions, like RM016 Ultra-Flat are the time and the date. The dial is more or less printed on the bottom of the sapphire crystal. Beneath that is a view of the movement. Dial design looks more like something out of a futuristic gun scope than it does like any practical diving watch I know of. It is Richard Mille’s attempt to bring something new to the genre as well as have enough of the brand DNA in the watch. Truth is that this is Richard Mille’s first round watch line (the RM025 and now the RM028). It still feel Richard Mille in fashion, but that wasn’t by accident. Keeping a distinct brand DNA is something this up and coming powerhouse brand must carefully preserve. 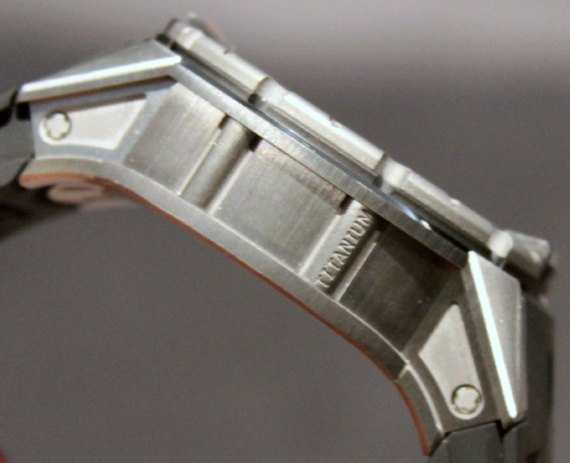 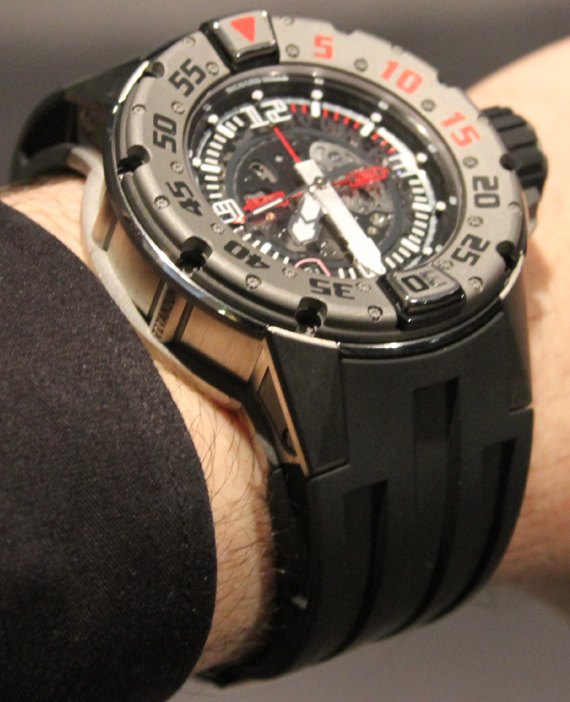 This is one of the only modern sport watches that also looks good with a suit. In fact, more people are going to be wearing it with a suit than actually diving (or other such activities). Richard Mille understands this, but is pretty proud of the durability of his watches. The famous example is the Richard Mille tourbillon watch that Felipe Massa wore during a pretty hideous car crash during a race – that like Massa, survived (and the car did not). This says a lot as tourbillon watches are delicate to say the least. I have no doubt in my mind that the RM025 or RM028 would put up with just about anything you wanted to throw at them, but would you have the heart to test their limits? Then again, for the brave, the RM028 does meet ISO norms for being a “true diver,” so have at it people.

While the movement functions are basic, it is an automatic and it does have lots of fancy materials in it. Steel, titanium, palladium, tungsten, and white gold. Not all necessary, but all present. The movement also features that now common “variable inertia winding geometry” of the automatic rotor. This allows you to adjust how much the rotor winds the movement based on your “lifestyle.” Problem is, unlike De Bethune watches that also have this feature, you need to send your watch back to Richard Mille to have them adjust the rotor. A nifty concept, but impractical beyond belief 99% of the time, and just part of the incredible (and fun) amount of “over-engineering” that goes in the watch. 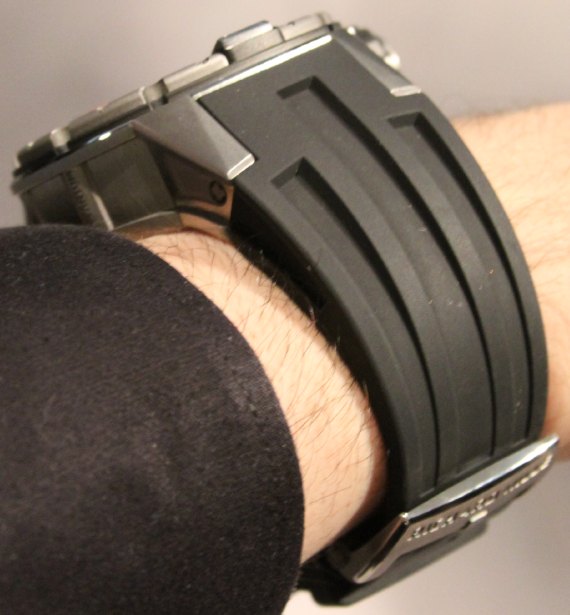 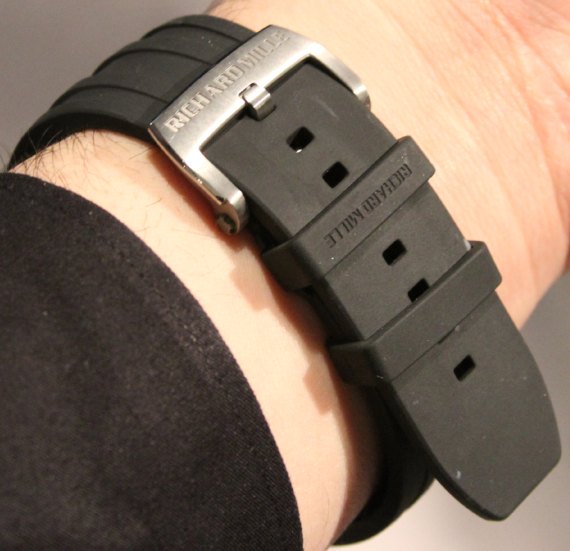 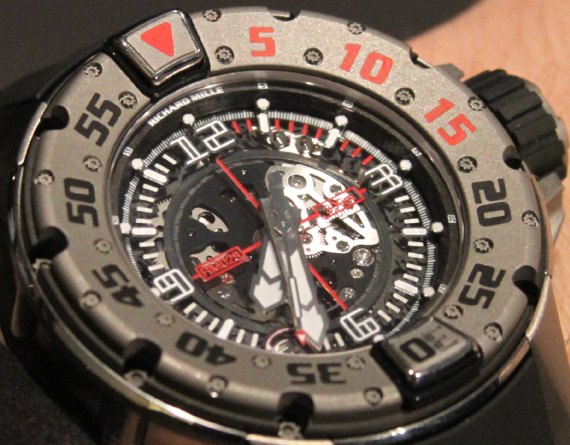 Love or hate all the engineering you can’t deny that it is cool. Some will complain that the watch is “too much, not necessary, or just plain out of touch with practicality.” Yea it is but I also like buying cars that go faster than I can drive, and desktop computers that would benefit NASA, but are going to be used to read the news, blog, and e-mail my mother once in a while (so that I can avoid calling her). I love having more than I need. It is more than a trait of being American, but part of what luxury inherently is. Affording over indulgence such that if you ‘ever’ need it, no matter how remote the possibility, it is there for you. How this perfectly translates to the “feasible” functions of the RM028, I don’t know – but Richard Mille has a firm grasp my “gotta have it” gland, and is squeezing tightly.

While the RM028 on paper might not add up to the sum of its parts, it is certainly a hit. According to Richard Mille they can’t keep up with orders, and are among the best performing independent brands today. Strapping this dominating diver to my wrist I get a kick out of turning the massive rubber-coated crown that looks like a wheel from a watermill – and reading the almost phallic hands, It strikes me that is the epitome of a modern high-luxury men’s sport watch. It really is a fantastic piece. While I don’t have the money for one, I am not Richard Mille’s target consumer, but I am square on the radar for people who are meant to desire one. Price is $79,000.