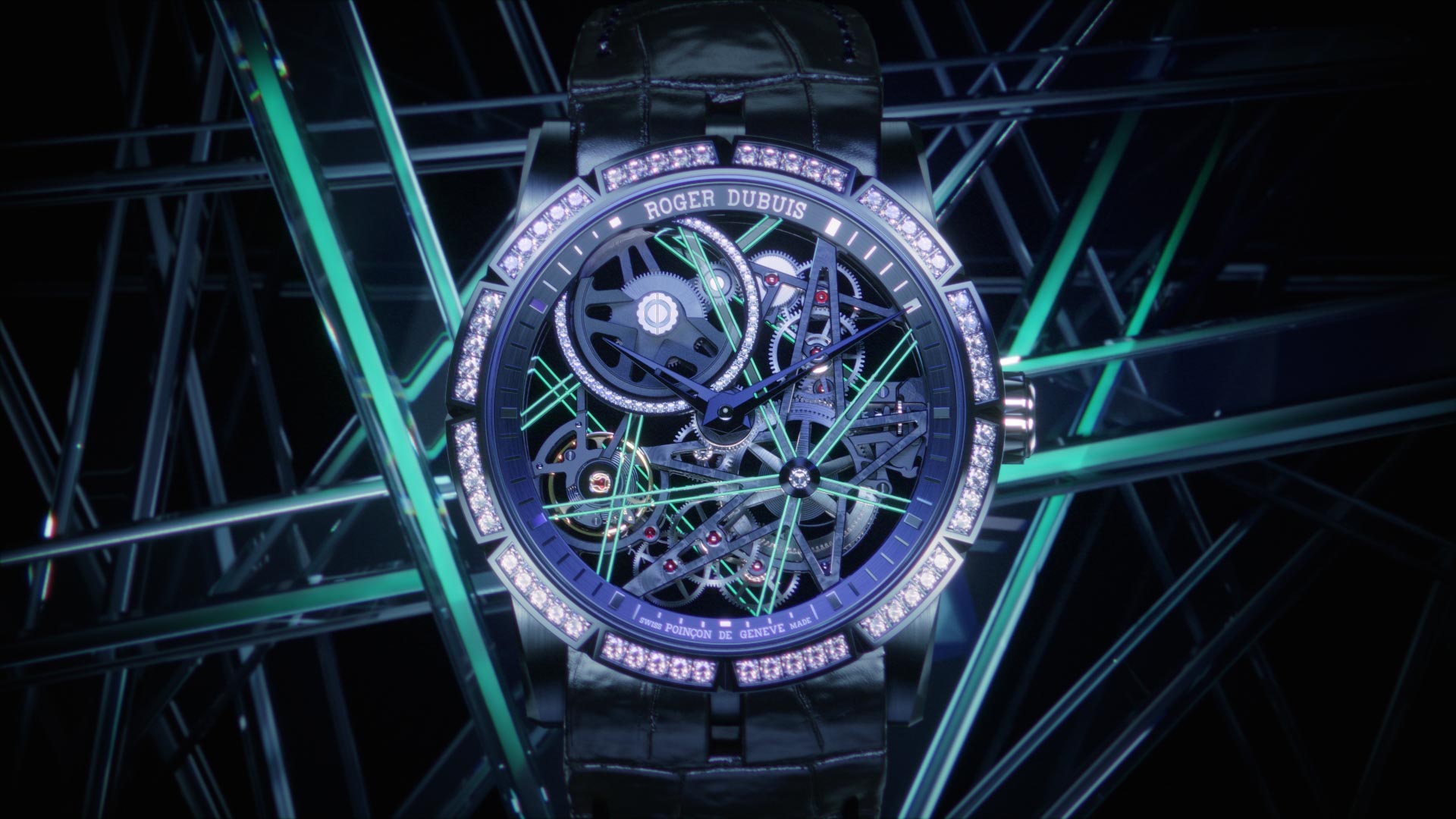 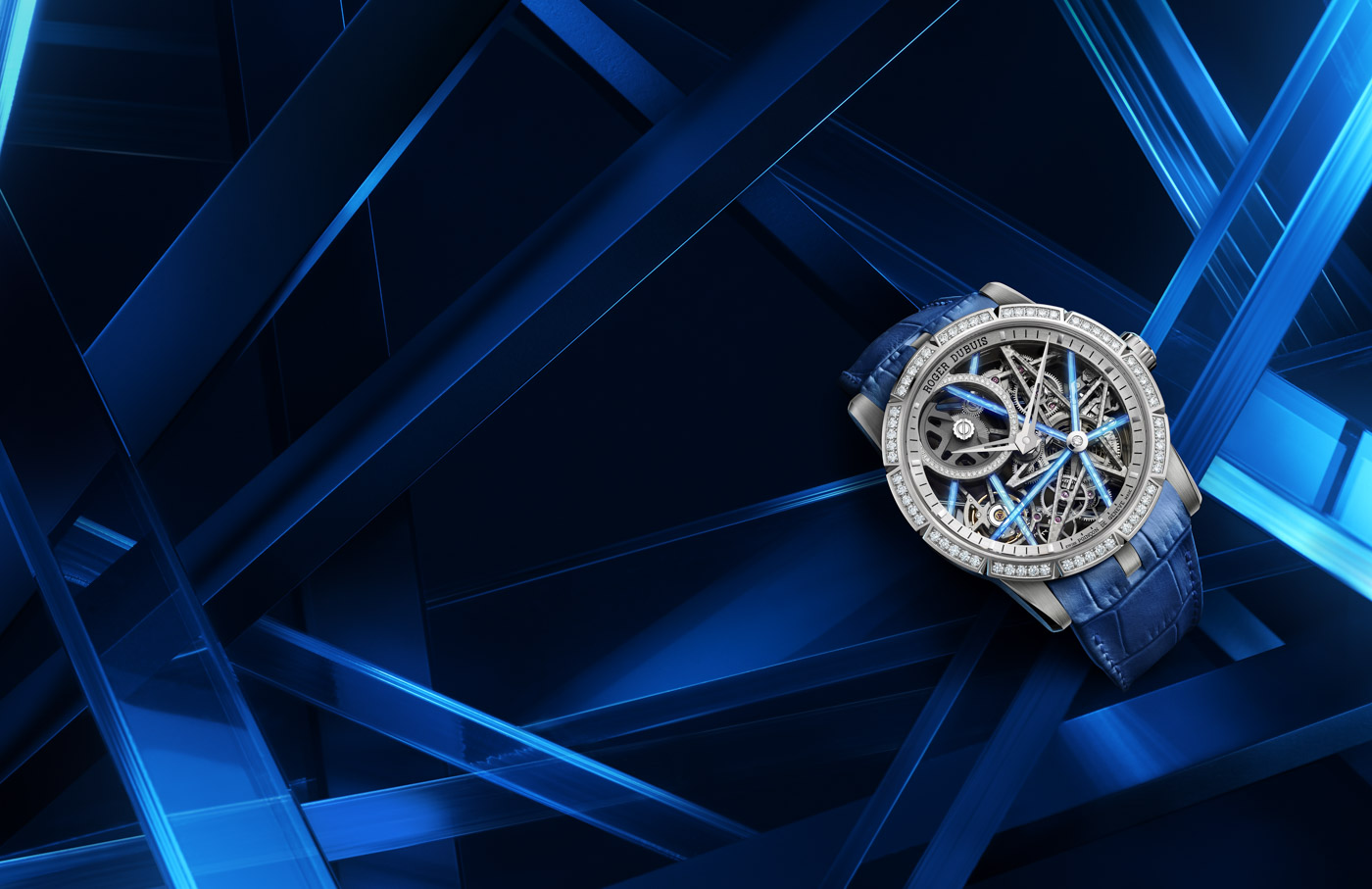 To clarify, the Roger Dubuis Excalibur Blacklight Trilogy is “lit” in the sense of the modern phrase that Roger Dubuis’s target demographic will certainly understand. By that, I mean it is quite cool — even if it is, in fact, not for some Super-LumiNova, but rather some external UV light source that the watches begin to give away the reason they are called “Blacklight.” 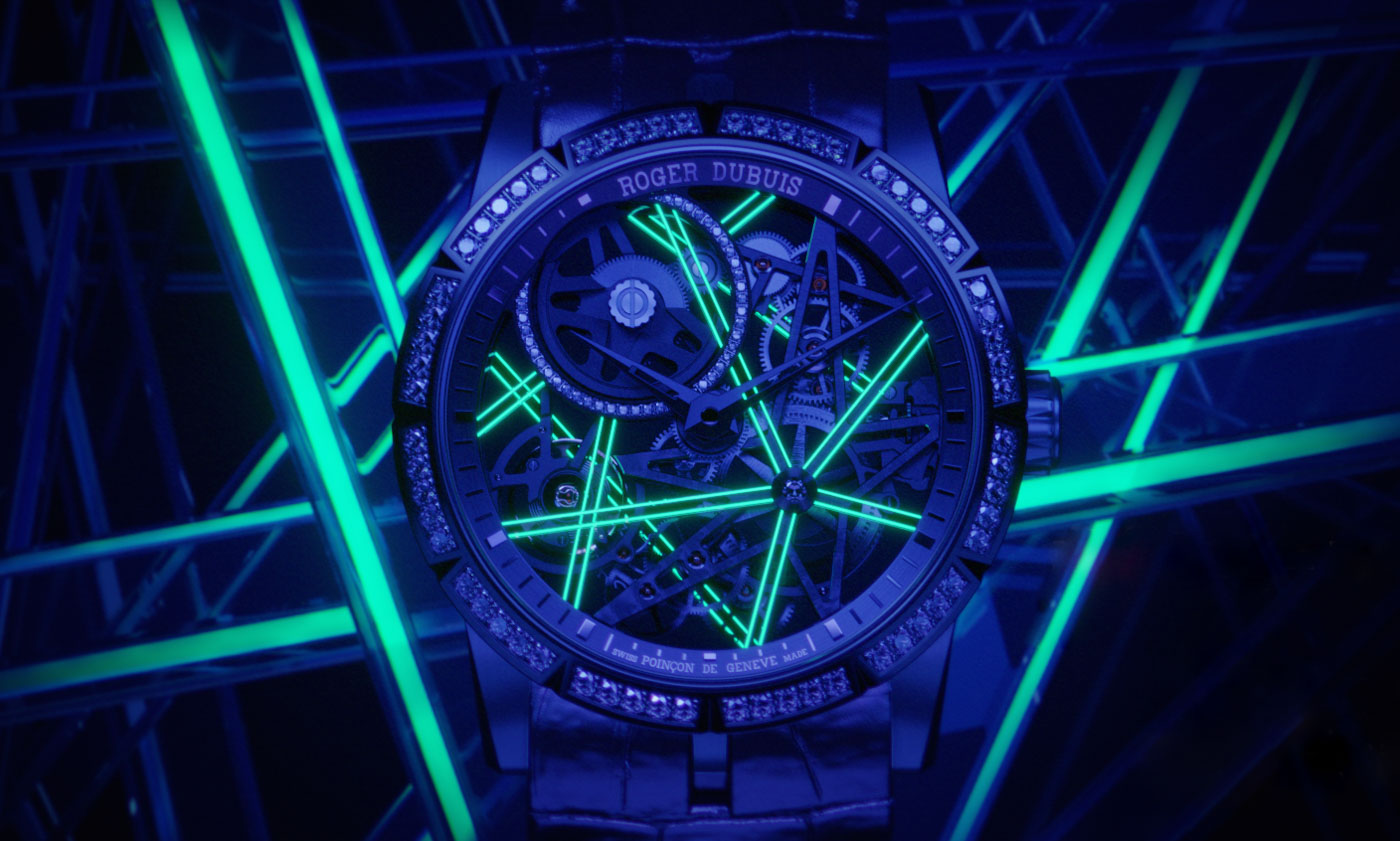 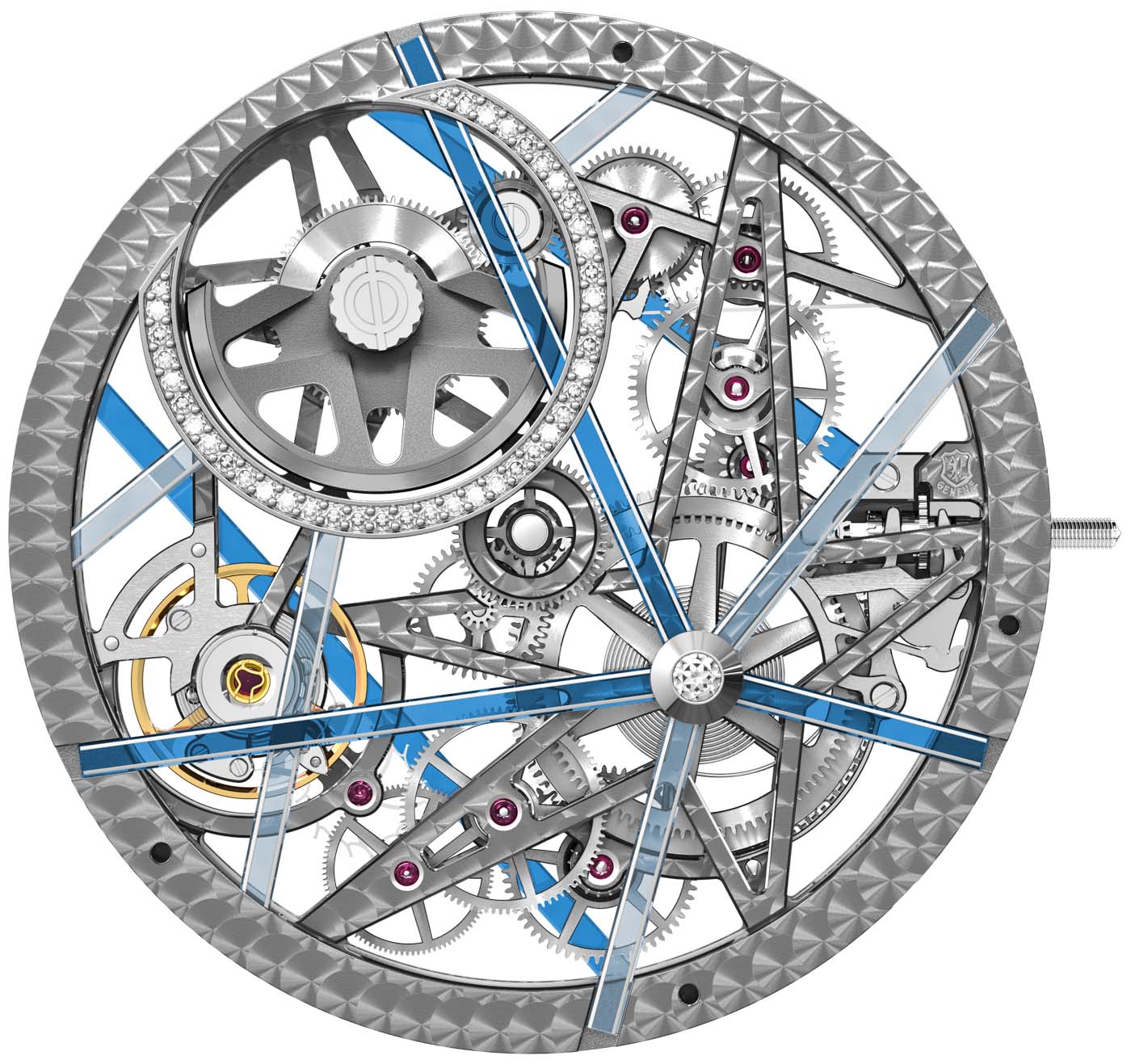 Interestingly, Roger Dubuis doesn’t say all that much about the technology it utilized. The point is that — contrary to what one might believe upon first sight — it has left the trademark 166-component Roger Dubuis RD820SQ skeletonized caliber intact and added a web of specially produced crystals above, as well as underneath it. Reminiscent of neon light tubes but not actually capable of emitting light on its own, this decor is “made possible by a technology used for the first time in the Haute Horlogerie industry.” 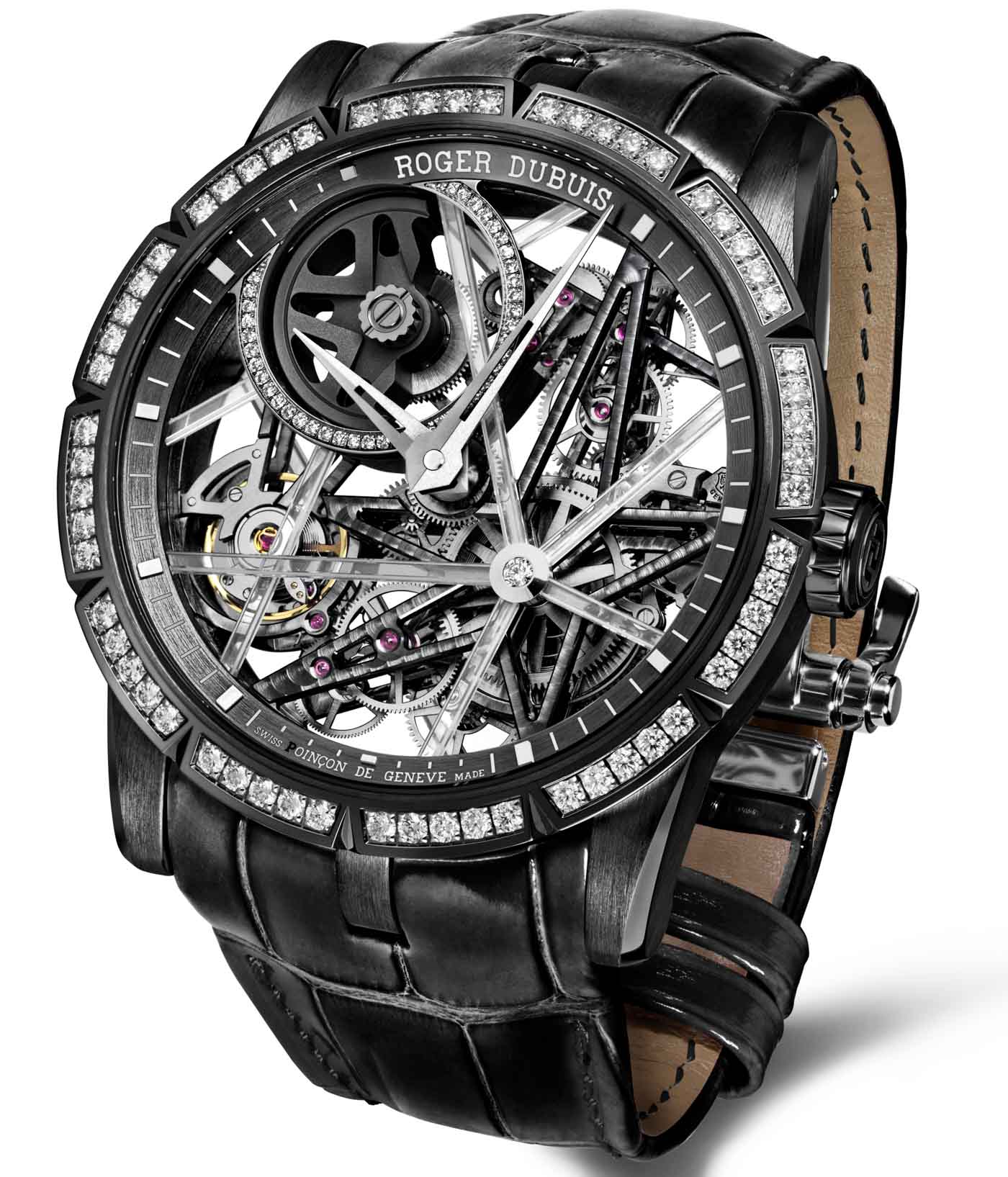 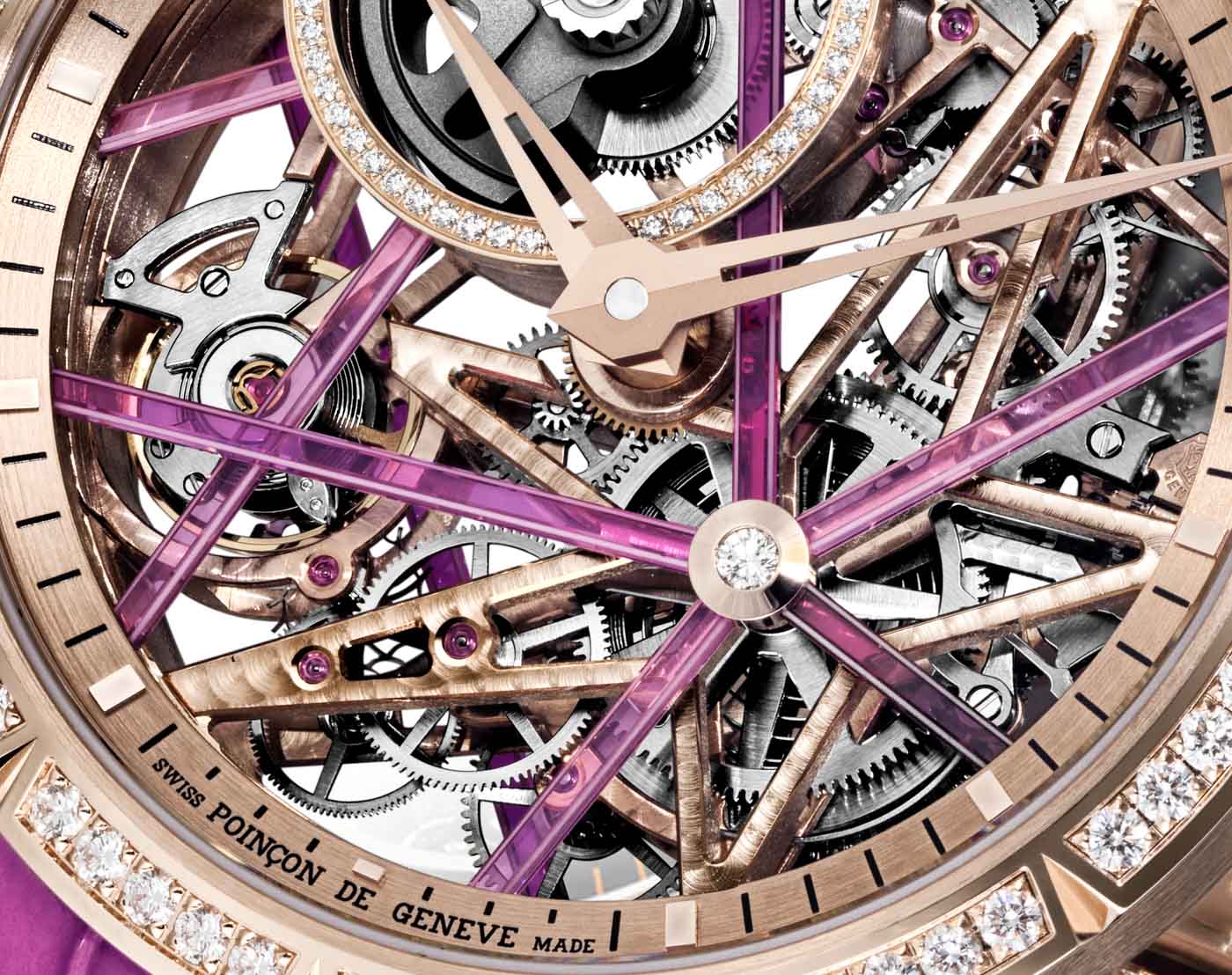 Roger Dubuis goes on to call it “an innovative technology using micro-structures made of lab-grown sapphire identical to that used in watchmaking jewels.” It being “identical” kind of contradicts the “used for the first time in the Haute Horlogerie industry” segment — but let’s not nit-pick and just accept that somehow these structures differ from the similarly “grown” sapphire crystals and artificial movement jewels. Sharing more information on how and why they glow certainly would have been beneficial, as watch-lovers — no matter how rich — have, for a while, been wanting to be able to learn about their next expensive purchase. You see, over the now 30-year renaissance of the luxury watch industry, these buyers have faced (and probably experienced) a host of cases in which their egos and/or wallets got burned — and so, despite what some would like to think of it, the market of HNIW customers is more educated and more suspicious than it has ever been. Therefore, to offer some extra details on your cool new technology would probably increase prospective buyers’ confidence, as opposed to hold it back. 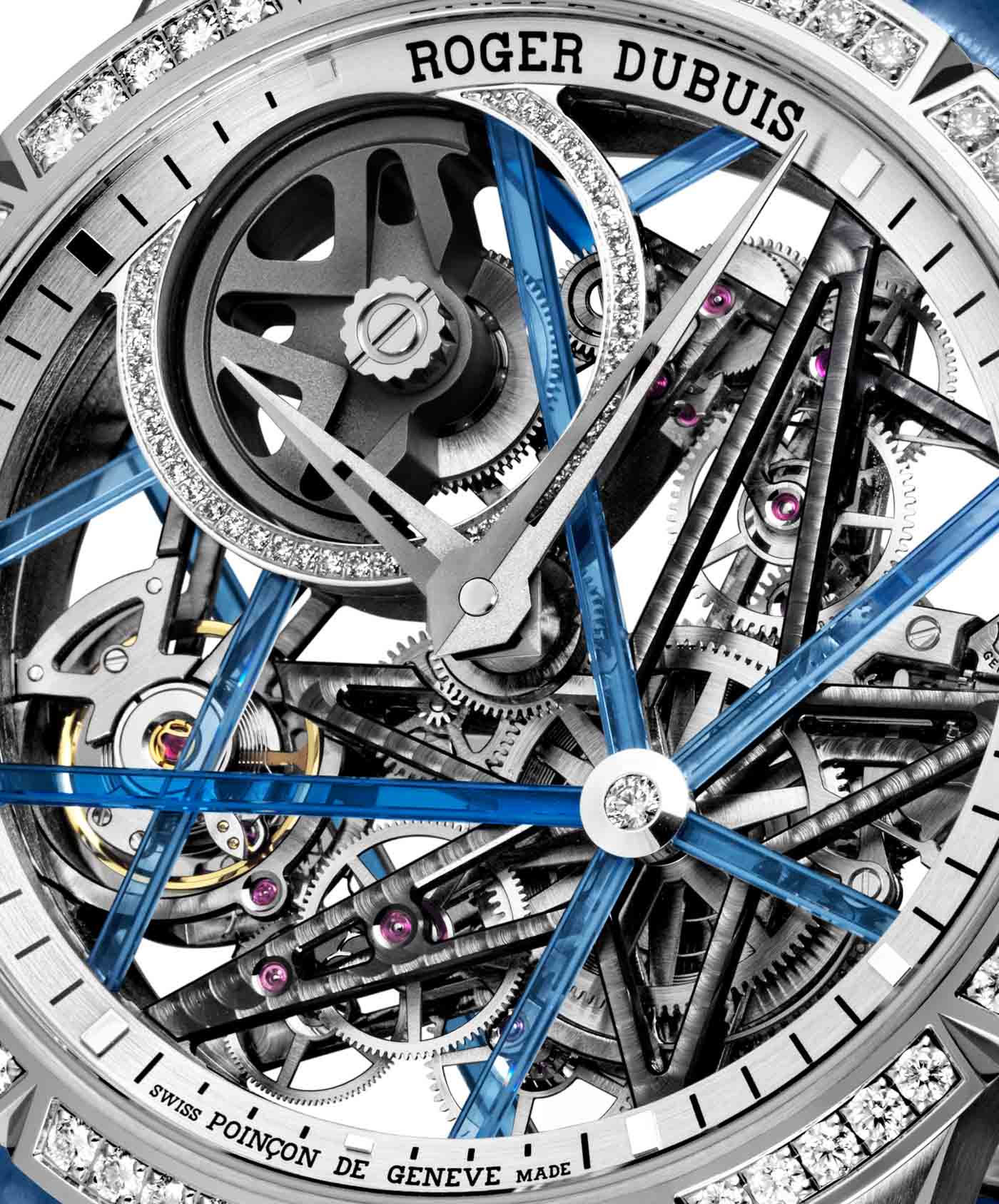 The tubes certainly look cool in their blue, pink, or white translucence; to see the teeth on a wheel or a jewel inside a bridge through these colored arms is a fun experience — once you have a loupe or some decent quality macro gear, that is. What I, as a watch-lover, appreciate a lot more, though, is the (not inherently obvious) way Roger Dubuis played with the pre-existing tiers and layers of its RD820SQ caliber and added these colored bridges not simply over them, but rather into them. They have been cleverly woven through the pre-existing caliber’s web-like structure. An easy place to spot this happening is up by the 12 o’clock mark where one of the longest bridges goes underneath the hands, then directly through the round frame of the micro-rotor, over the oscillating weight, and at last into the flange ring under the Roger Dubuis text.

In the off chance that the aforementioned target demographic couldn’t quite see its own reflection in the product, Roger Dubuis debuted the Excalibur Blacklight Trilogy collection of three watches with a video that, to me at least, strongly resembled the club scene of Bad Boys II (2003), where the camera — in some very cleverly done, seemingly uncut footage — flies from the skies into and through the ventilation system of a building and then into and through an early 2000’s club full of UV lights and other not-safe-for-work sorts of appendages. I wanted to embed the video to show the resemblance, but this is not 2003 anymore. 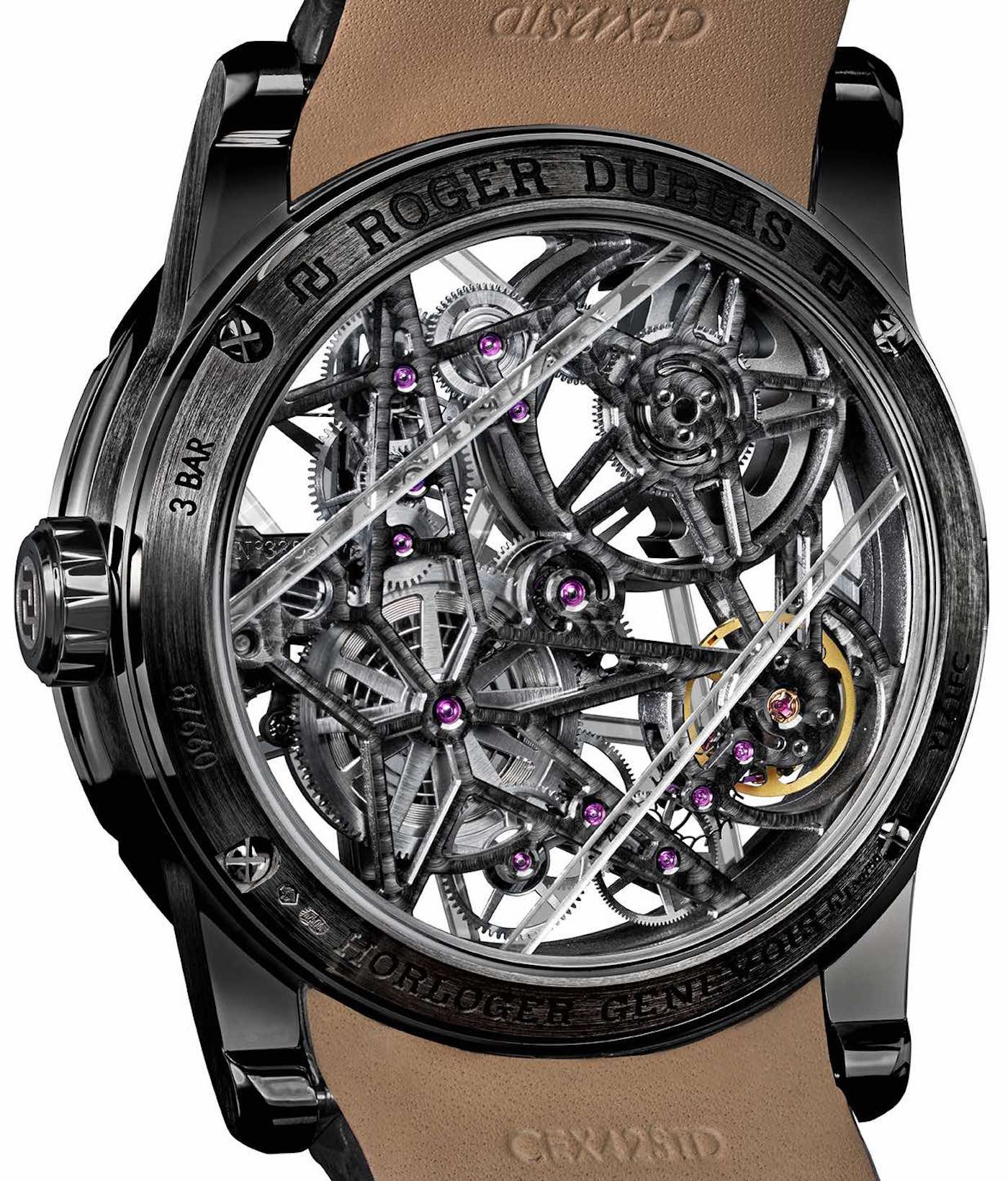 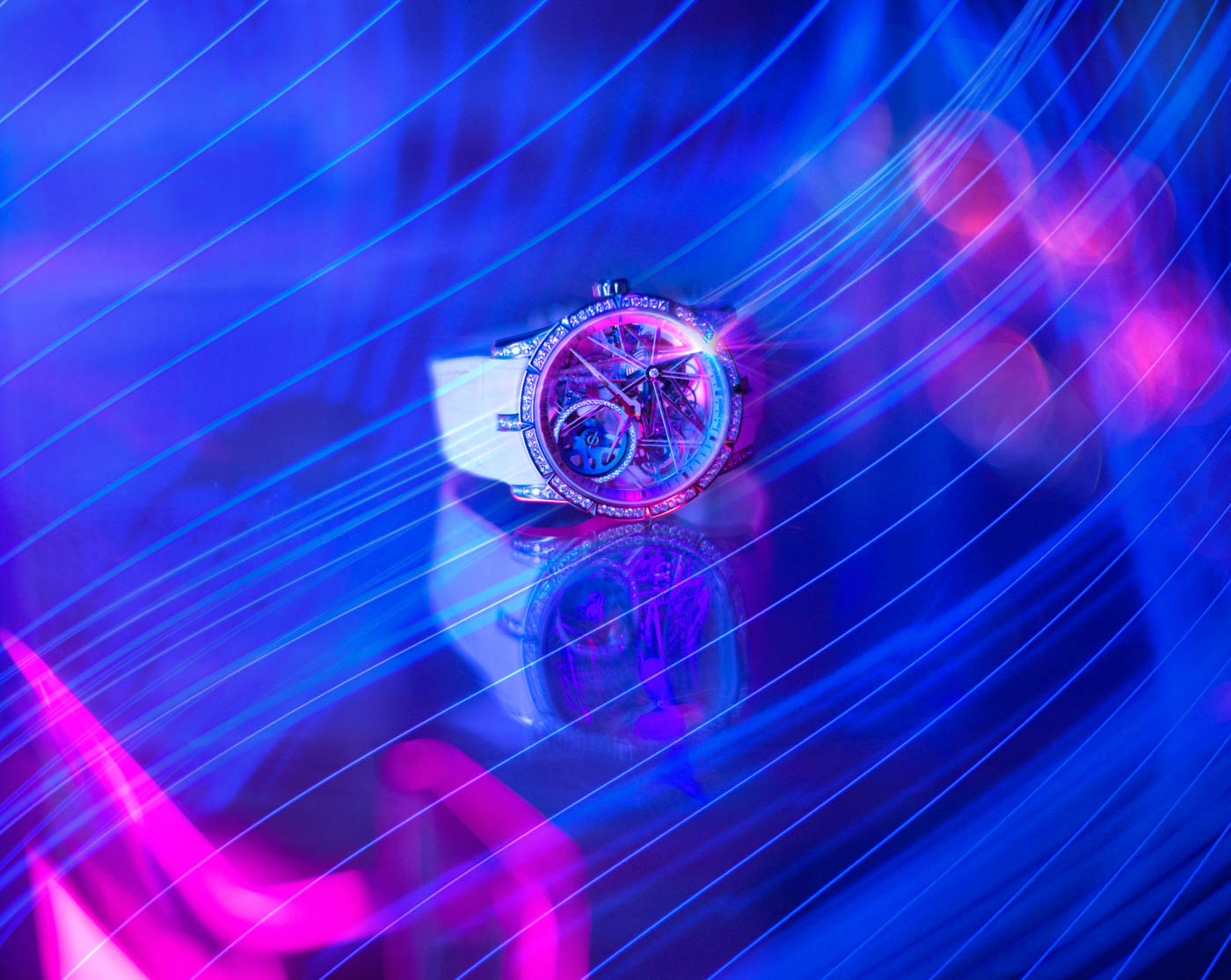 I quite like the concept behind these three watches, even if I know perfectly well that it won’t turn the world of watches (or even that of Roger Dubuis) inside out and upside down. We have to acknowledge that it wasn’t the point of the exercise, anyway. Two things I miss are a proper explanation of the technology used — either in the press release or on the product’s official website — and that these bridges were crafted from some even cooler material: something that could emit light on its own, negating the need for having to go to an early 2000s club with an abundance of UV lights in it. Like Super-LumiNova paint or long tritium tubes — as for the latter, I know that there is a legal limit to how much tritium can be in a single watch, but wow, would that have been fun. 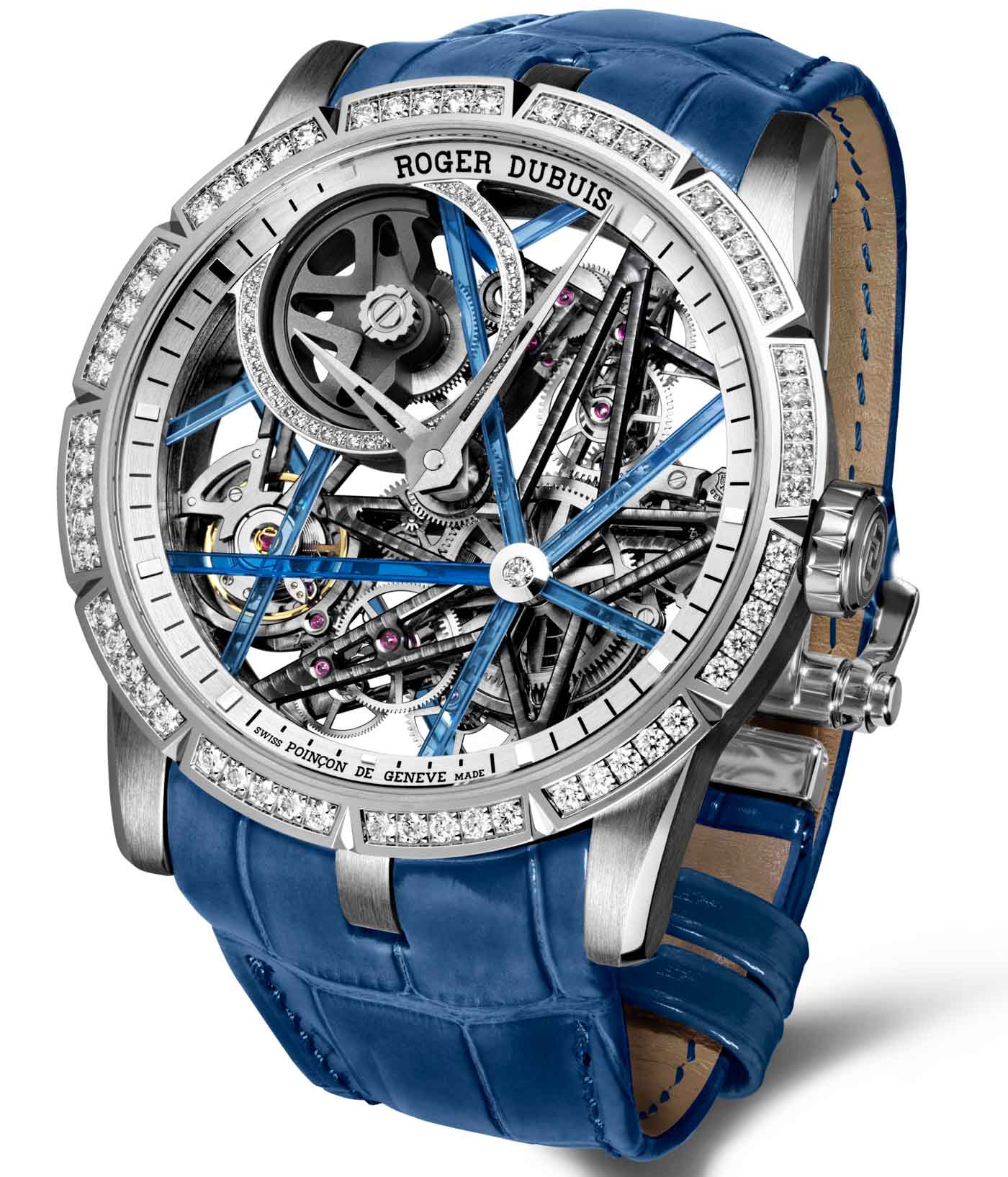 Anyhow, I appreciate Roger Dubuis doing something playful and l’art pour l’art like this — as much as it pains me to say it, the last three to four years have really brought upon us a drought of similar spirited exercises. I’d love to see Roger Dubuis remain the brand that brings some balance to the game and strengthen its inherent abilities that have historically allowed it to do just that.