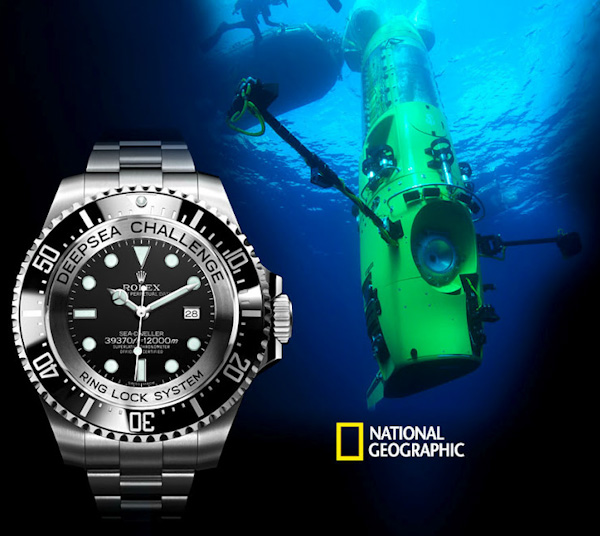 Rolex Deepsea Challenge Watch Goes To Bottom Of The Ocean

Who said Rolex makes only smaller or medium-sized watches? With huge cojones Rolex deftly reclaims their status as king of the dive watch by making the deepest diving mechanical watch ever (as far as I can tell) in the size-happy 51.4mm wide Rolex Deepsea Challenge. The watch is cool and the story is even better – this is PR gold.

On March 26, 2012 a vessel called the Deepsea Challenger emerged from the depths off the coast of Guam after spending several hours underwater. Looking like a lime-hued torpedo with two robotic arms, a single man crawled out of the hatch as cameras peered inside to see if man or meat jelly would step out of the green machine after it spent over six hours traveling to and then strolling on the sea floor in an environment with immeasurable pressure (well it is measurable). Box office king (and director) James Cameron casually came out of the tube. Who else? Wearing a Jacques Cousteau style head-warmer and trimmed-beard, the do-no-wrong film-maker and sci-fi visionary just finished going to the deepest bottom of the ocean. Almost seven miles underwater to the floor of the well-known Marianas Trench. James piloted the Deepsea Challenger 35,756 feet (10,898 meters) under water. 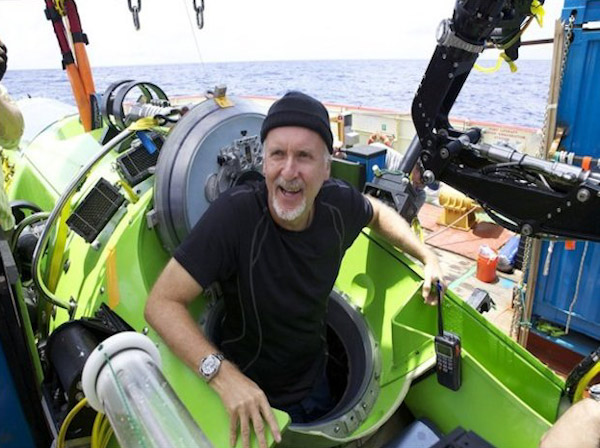 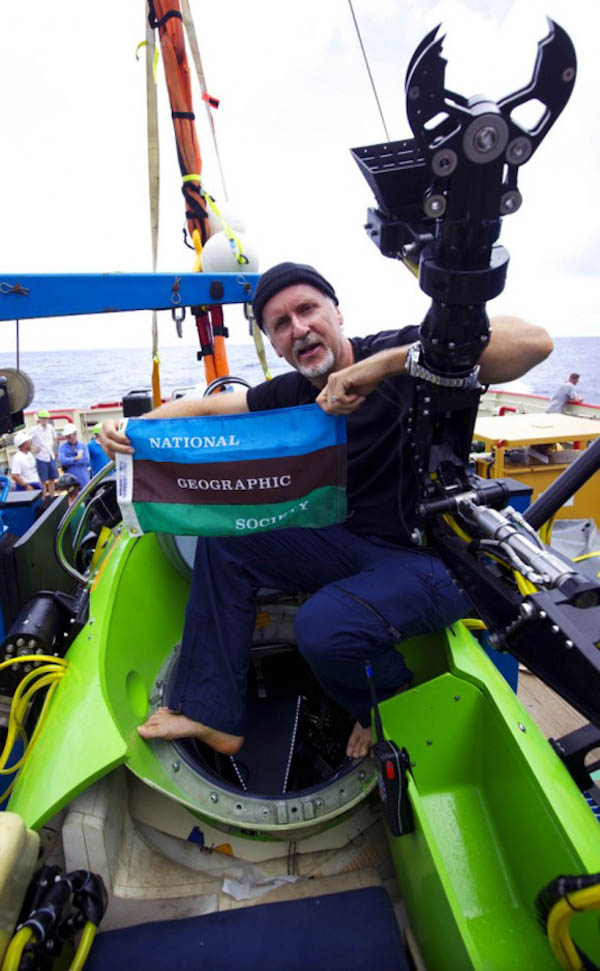 Mr. Cameron’s inclusion in the project was not exactly a Hollywood stunt. It is true that while down there he brought some special 3D cameras to take footage for an upcoming feature film about the bottom of the ocean (with a theatrical release relatively soon), but Cameron is no diving novice. Cameron has actually gone on over 70 deep vessel dives exploring the depths. If you recall he made movies such as The Abyss and Titanic which each involved underwater elements. Cameron is practically a diving hull professional, so putting him in charge of the Deepsea Challenger that took over eight years to develop wasn’t that much of a liability. Plus, Cameron almost guarantees that people will pay attention – and who else was going to go down there and appreciate it as much as James?

At 24 feet long the Deepsea Challenger is tiny compared to the famous Trieste vessel that made a similar journey in 1960. The mission 52 years ago spent only 20 minutes on the sea floor, but was able to go down that deep. This time around Cameron not only took footage of what he saw, but collected samples and other data for scientific purposes. The project was a joint effort between a series of sponsors who are eager to help rebound deep sea exploration (because apparently space is on hold). One of them of course is the almighty Rolex (who is no stranger to the deep). 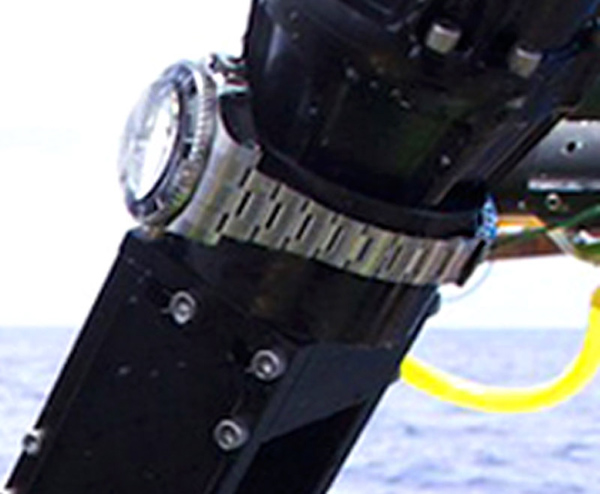 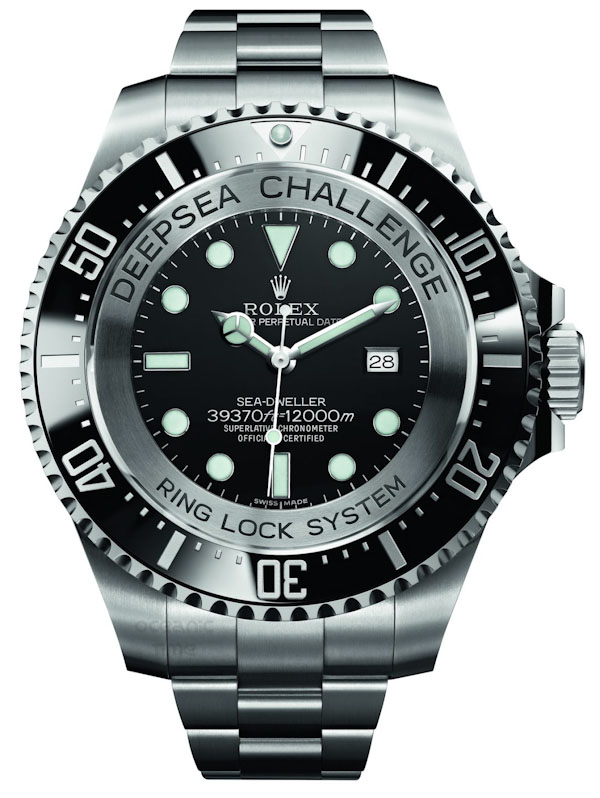 Rolex isn’t new to this game. They were even part of the 1960 Deepsea mission just as they were with the 2012 mission. Aside from merely being a sponsor, the brand developed a new Rolex Deepsea watch to go down with the ship. Most dive watches are pressure tank tested. Meaning they go into special dry tanks which simulate water pressure and test to see if air leaks into a watch case. That’s useful and all, but Rolex wanted to test its new experimental watch as deep as possible in real water. Strapped to the Deepsea Challenger’s robotic arm was the new, not-likely-ever-for-sale Rolex Deepsea Challenge watch. Robots – as our future overlords –  will apparently also prefer to wear mechanical watches.

In a sense the story of the watch’s mission is almost anti-climatic. It went down to almost 11,000 meters and came up just fine and without a hiccup. The Rolex Deepsea Challenge is essentially a beefed up Submariner Deepsea watch (originally released in 2008). With the same in-house made Rolex Caliber 3135 automatic COSC Chronometer movement, it is larger in most all ways but retains the same basic DNA. Think of the Rolex Deepsea Challege and the Deepsea’s bigger more commercially unavailable brother. 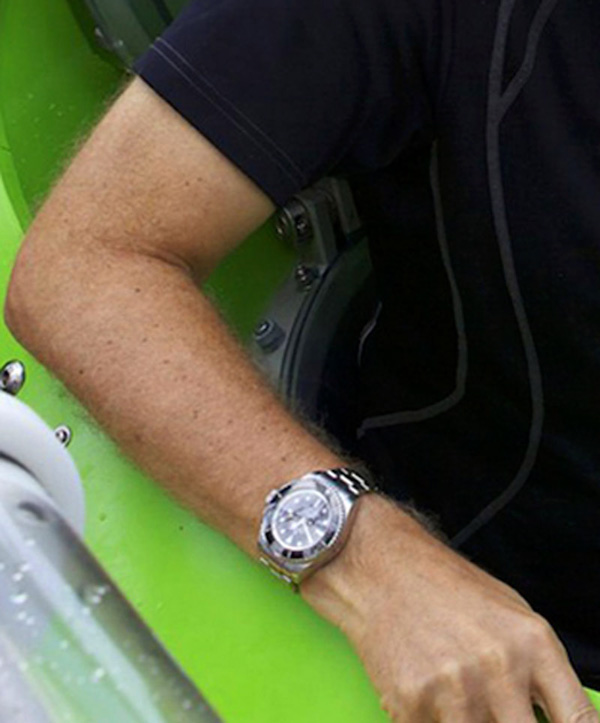 Beyond a certainly point making a watch super water resistant is about armor. According to the brand, the Rolex Deepsea Challenge is able to resist 13.6 tonnes of pressure. That is up from the 3.1 tonnes of pressure on the Rolex Deepsea. How is this possible? More metal… and sapphire. The super-sized Submariner style case is a chunky block of Rolex’s very nice 904L steel being 51.4mm wide and 28.5mm thick. The sapphire crystal alone is 14.3mm thick. It is a tank, made to resist the onslaught of pressure from all side. The watch incorporates the Oyster style caseback and the Rolex Ringlock system. The rear of the case is in grade 5 titanium.

In total, the Rolex Deepsea Challenge is able to go down to 12,000 meters, which is 39,370 feet. The world of science still hasn’t answered why this is necessary, but we think it is really cool (don’t we? I know I do). Even with its large size most people want to wear this. I think it is amusing how Rolex produced a special long bracelet to strap the Rolex Deepsea Challenge to the robotic arm. What was Mr. Cameron wearing on his wrist? Mere humans only get regular Rolex Deepsea watches. 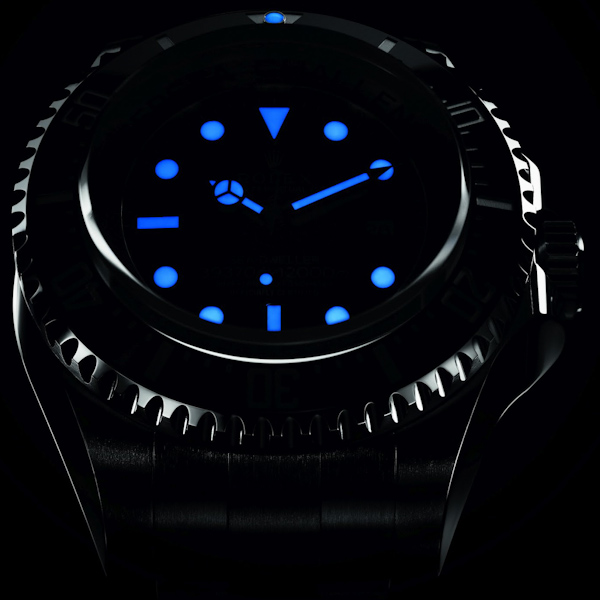 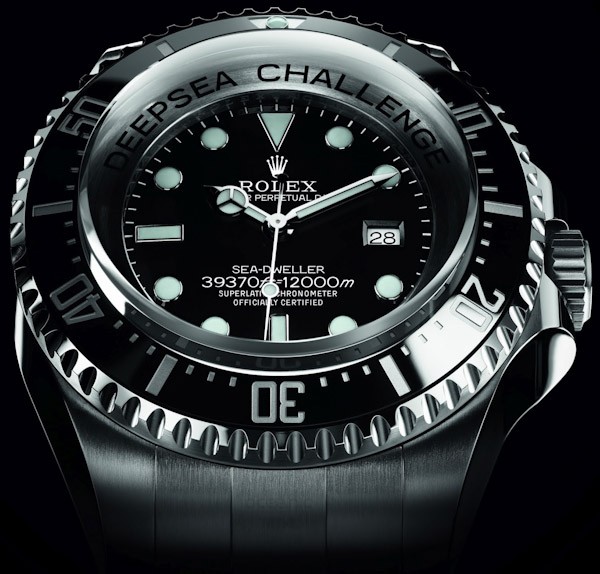 If the robotic arm had robot eyes then it would likely have been able to see the dial in the murky depths. Rolex uses their very nice CHROMALIGHT lume in blue for the dial, which is surrounded by a massive chapter ring (and we thought it was big on the regular Rolex Deepsea). The bezel insert is ceramic, done in Rolex’s proprietary Cerachrom material with platinum colored numerals. For a piece that will likely never be produced in any commercial capacity, Rolex is sure going through a lot of effort to tease people.

The journey of the Deepsea Challenger is interesting and more information can be learned here via the official site. To continue reading about the history of the Rolex Deepsea projects then my friend Jake has chronicled many of the important facts here. By the way, the technology to this point has gotten so good if you think about it. There was so much confidence in this mission that no one ever even thought Mr. Cameron would be in any danger. He was even able to Tweet from 6.8 miles underwater. So why can’t I get phone service at 38,000 feet in the air? Thanks to Rolex for keep the dream alive, it is nice to know that they still participate in this stuff.