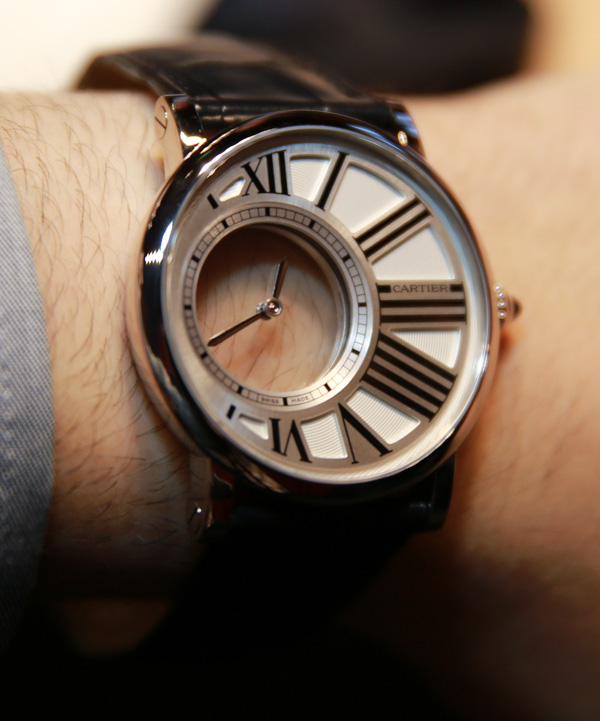 The term “mystery” (whether in English or French) as applied to a clock or watch means that some part of its mechanism or operation is hidden from the user. In this case it means that you can’t immediately see how the hands are attached. Two watches in 2013 battle it out for your less than mystery dollars.

It might be fair to say that the real distinction of a “mystery” watch innovator goes to Swiss brand Quinting. Those guys make some wildly interesting electronic quartz watches that for years have used transparent sapphire crystals to mount hands in order to create an “invisible setting” effect. They have cool stuff like chronographs and other interesting watches that apply this principle. While neat, I think Quinting still struggles a bit given their high price and quartz movement interior. That isn’t to say that aren’t pretty fantastic. On the mechanical watch front, you have some new mystery watch options from Konstantin Chaykin, and now Cartier.

I’d say that Cartier was one of the most impressive brands to visit (again) at SIHH for 2013. A duo of mystery watches delighted us eager watch writers. Now, Cartier has a long history with mystery clocks. Close to 100 years ago they were making a range of beautiful mystery desk and mantle clocks. That heritage has now been miniaturized into a pair of high-end wrist watches in their upper-end collection. One is the Rotonde de Cartier Mystery watch and the other is the Rotonde de Cartier Double Tourbillon Mystery Watch. That latter piece will likely get a dedicated article so stay tuned for more information on that. 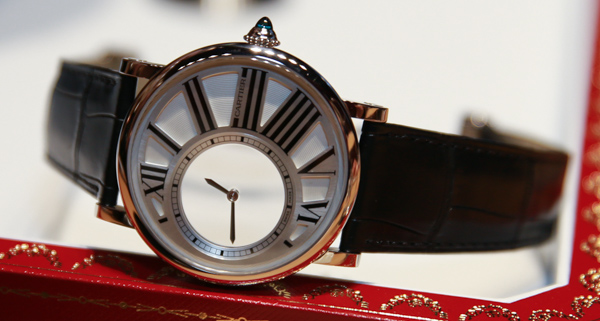 A few months before Cartier unveiled the Rotonde Mystery watch our favorite (and possibly only) Russian watch maker Konstantin Chaykin unveiled his new Levitas collection of mystery watches. In execution and principle both of these timepieces are extremely similar. In fact, the layperson may be able to mistake them from a distance. I don’t know whether or not the release of both of these timepieces in near proximity was a coincidence or not, but it is interesting that they both came out around the same time. Konstantin Chaykin is a small indie watch maker who isn’t exactly a threat to Cartier, but he did technically beat them to the “announcement” punch. Let’s look at these pieces more closely to see how they relate – because the price difference is significant.

Cartier’s Rotonde Mystery watch is rather lovely and comes in 18k white or rose gold for 2013. I don’t think a steel model will ever be available. The Rotonde-style case in this instance is 42mm wide with a ton of distinct Cartier styling. You get that typical deeply cut and engraved dial with blackened sections and Roman numerals for much of the dial. Then there is the “hole” where you see the hands. Just in case you aren’t familiar with these systems, the movement moves two transparent sapphire crystals that have the hands mounted on them. It creates the illusion that the hands are floating in space. The effect is interesting, but as many people commented when I first put an image of this on Instagram and Facebook while at the show, it wasn’t super sexy to see your arm hair through the watch. 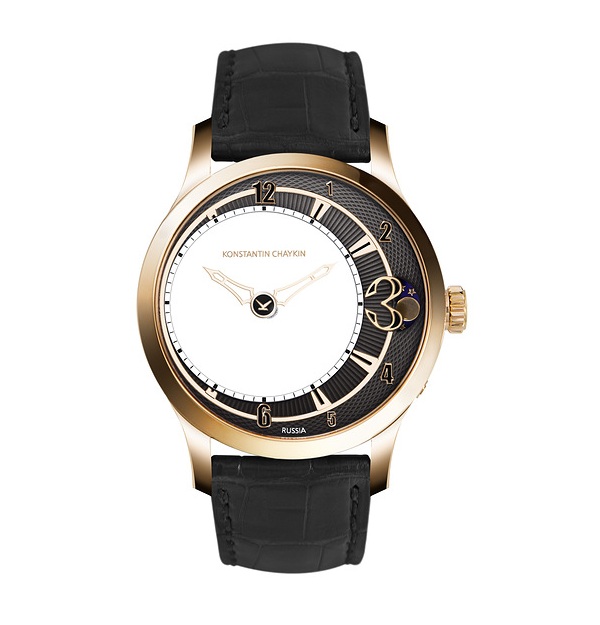 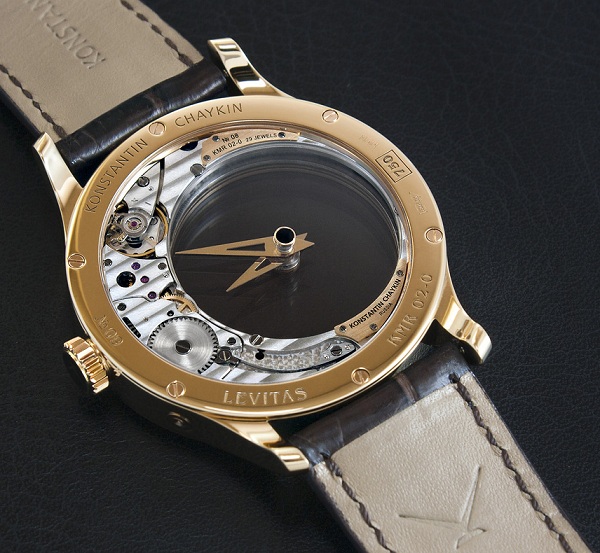 Inside of the Cartier Rotonde Mystery watch is an in-house made caliber 9981 MC manually wound movement that is made up of 158 parts and operates at 21,800 bph. It has a power reserve of 48 hours, and is just 4.61mm thick. The entire Cartier watch is just 11.6mm thick. Overall relatively slim for what it is a nice movement. On the rear of the watch you can see the movement in its entirety. The challenge for a movement such as this is moving the relatively heavy discs which can effect accuracy tremendously.

Things are a bit different in the Levitas watch with Konstantin Chaykin’s also in-house made caliber KMR 02-0 manually wound movement. And by a “bit different” I really mean just a bit. Only watch movement nerds will have a lot to say on this. Functionally the two movements are quite closely related. You’ll notice that the Levitas watch has a significantly larger opening for the “mystery” dial. This means that the movement has much less space – a considerable challenge over the Cartier 9981 MC. The KMR 02-0 is a bit thicker at 5.5mm thick but overall takes up less space. It operates at a slower 18,000 bph, and has a shorter power reserve of 33 hours. Konstantin Chaykin also readily admits that the system is not incredibly accurate given the weighty sapphire discs and rates the movement as accurate to about 30-45 seconds a day. Unless told otherwise, I would guess that Cartier’s movement isn’t terribly off from this number given the same issues. Having said that, I think that Cartier’s watch is probably a bit more accurate given the smaller discs. Last, it is worth noting that there are two versions of the Konstantin Chaykin mystery movement as there are two watch sizes. The larger of which contains an additional complication – a moon phase indicator. 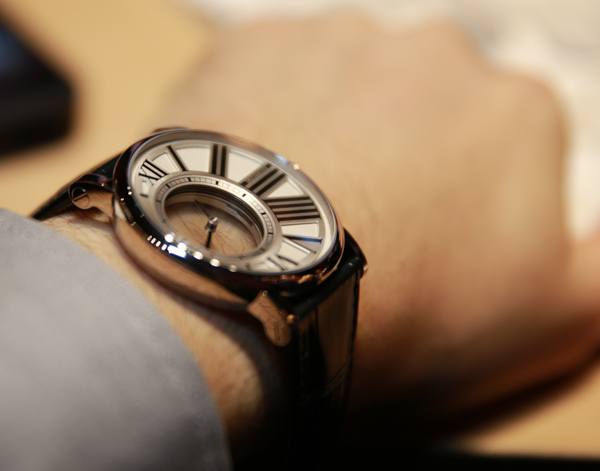 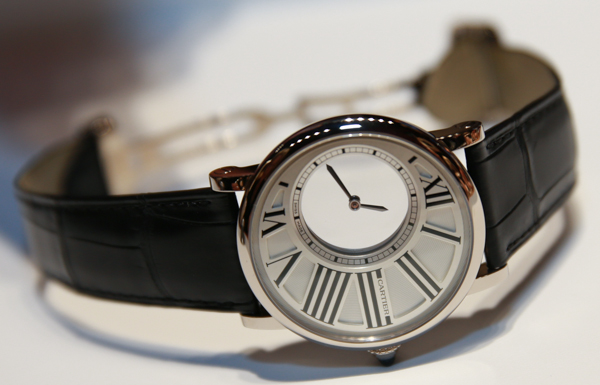 As you can see there isn’t too much terribly different about these movements. The Konstantin Chaykin offers a larger mystery dial and a moon phase indicator on the men’s versions, while the Cartier watch offers a longer power reserve and arguably more accuracy – as well as the desirable Cartier name. Not sure if one should wear this timepiece assuming it will be accurate beyond showing everyone exactly how much of a “watch tan” you have. Both watches have precious metal case options, though the Konstantin Chaykin Levitas offers a steel model as well.

While the Cartier Rotonde Mystery is 42mm wide, the men’s version of the Levitas is 44mm wide. As I said, there are 18k white or rose gold options, as well as steel models available. Note that Cartier also offers a full pave with diamonds version of its piece. Konstantin Chaykin also offers a few dial variations, with Roman or Arabic numerals and other decorative elements on the dial. There are also a few types of hands. No doubt the Cartier piece is more classic in style, but you get something a bit more unique with Konstantin Chaykin. 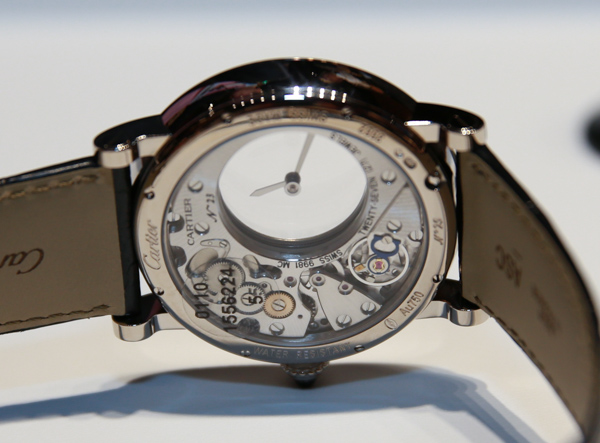 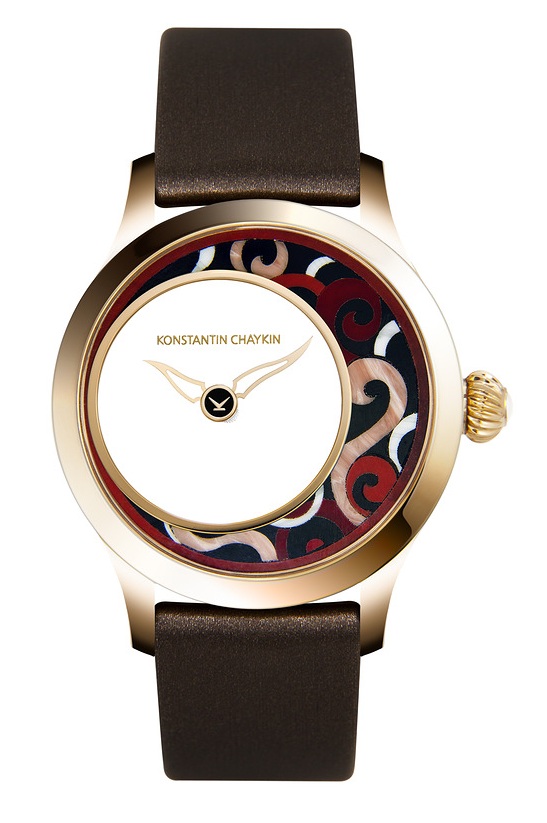 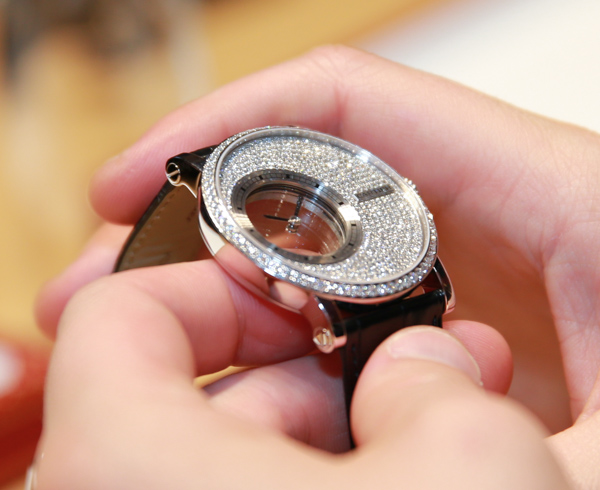 There is a 40mm wide version of the Levitas available as a women’s piece. It also comes in an “Art” range that has interesting and more high-end dials. Some of the Levitas Art models also come with diamond covered cases (in case you wanted to know). When it comes down to it, 2013 is certainly a good year for mystery watches. If there is a market for these timepieces then we will find out soon. I think the watches are cool and will do reasonably well. Of course, there are some practical considerations to wearing these – namely that you will see part of your wrist through the watch each time you or your friends look at the dial. It was recommended to me (in jest but you could do it) that you could just selectively shave a round area on your wrist under the dial. So, by all means go for it.

None of these mechanical mystery watches are inexpensive, and predictably the Cartier Rotonde Mystery watches are more expensive. These retail for $52,500 Ref. W1556223 in pink gold and $56,000 Ref. W1556224 in white gold. The Levitas collection from Konstantin Chaykin offers more models that range from 20,950 Euros in steel to 26,500 Euros in rose gold for the 44mm men’s models. The smaller ladies pieces with the hand-done art dials range from about 30,000 – 35,000 Euros. cartier.com  konstantin-chaykin.com