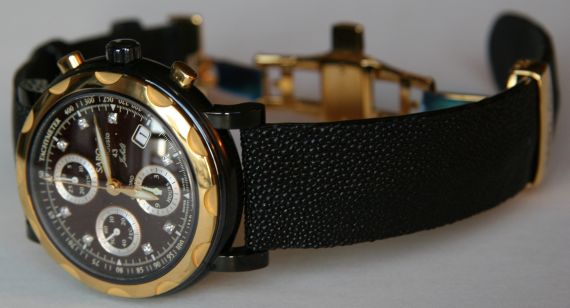 SARO-Gem watches really caught my eye by surprise. I noticed them for being actually quite simple, but interesting at the same time. It was one of those things I didn’t think much of because the watch dials I saw were acceptable to my mind right away (without looking strange or heard to read). At the same time, the watches themselves are uniquely design and decorated. I then recently became reacquainted with the Swiss watch brand and want to report my findings of a watch that I think should be considered by more people. SARO-gem has a wealth interesting watches, but I won’t go into all of that right now. I do want to point out however that the company is well known for having a unique sapphire-on-steel application that greatly increases the scratch resistance of steel. This particular watch however is of the models that doesn’t have metal bracelets, but I just wanted to let you know that such interesting materials are used by the company. Plus the watches are fully made in Switzerland, with Swiss parts, and a Swiss movement.

SARO-Gem has a series of unique manufacturing techniques that I don’t believe anyone else uses. These include of course the sapphire over steel that I mentioned above, as well as how they hand mill the watch cases and separate lug structures. After they are both hand formed, there is a special soldering process that permanently joins the two pieces together via a type of baking process. Of course the dials are enjoyable to look at as well being a soft tone until you look closely and realize the universe of gold flakes over (in this instance) a maroon dial. You don’t need to know this information to enjoy the watch, but it helps. Here is something that you will however enjoy knowing, that the watches come with a full 10 year warranty – more than virtually every other watch maker. 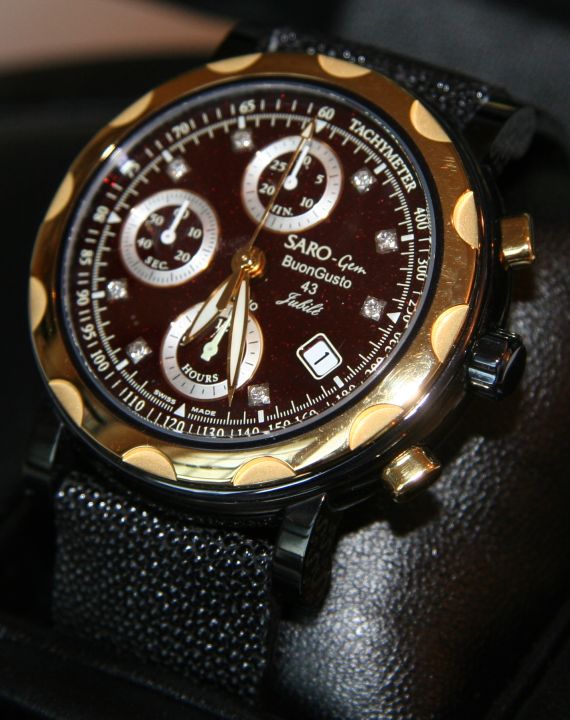 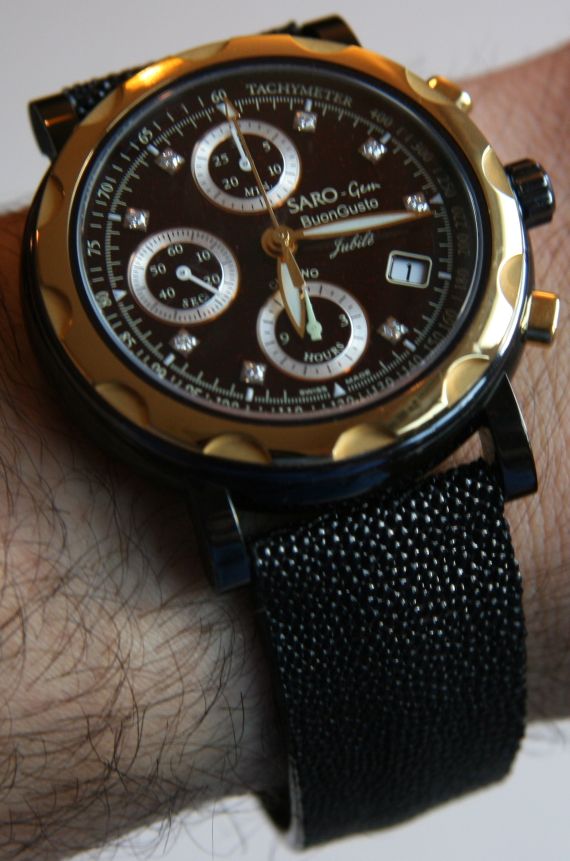 This watch is from SARO-Gem’s BuonGusto 43 Jubile watch collection. I say collection because there are tons of iterations on the design. This includes many colors, straps, bezels, dials, and case finishes, as well as levels of diamond decoration. This watch I am showing you might actually be totally unique. Each watch in the BuonGusto 43 collection is label “Limited Edition” just for that reason. The BuonGusto 43 collection meant to be a more sporty formal watch, which I thematically relate to the Bovet Sportster Saguaro watches.

The BuonGusto 43 watches comes in a 43mm wide case (about 14mm thick) done in Inox steel that is coated in various ways. Here, the steel has rose gold PVD coating as well as black PVD coating. You’ll different combos of these colors. There are many ways to get a gold color, aside from actual gold. I’ve seen most of them, and PVD coating is one of the better techniques – that and plating. Aside from the watch being a bit lighter than you would expect from solid gold, it looks the same.  On this watch you can see how the middle of the case and the crown are in black PVD, while the bezel, chronograph pushers, and caseback (save for the sapphire crystal exhibition window) are in the gold PVD. The result is very luxurious feelings being applied over highly polished steel. The bezel design is what SARO-Gem calls “half moons.” There are other styles as well, but I particularly like this look. The top of the bezel is polished, while the half moon sections are brushed, so it makes for a good contrasting look.

Notice the image where you can see the sides of the curved lugs. They have a special repeated “S” engraving on them that look pretty cool. I enjoy how the design is not viewable in all lights. In fact that is one of the underlying design concepts behind the BuonGusto 43 watch collection – that they are meant to be observed in many different lighting situations, where the look of the watch will alter, and you can enjoys its dynamic appeal. 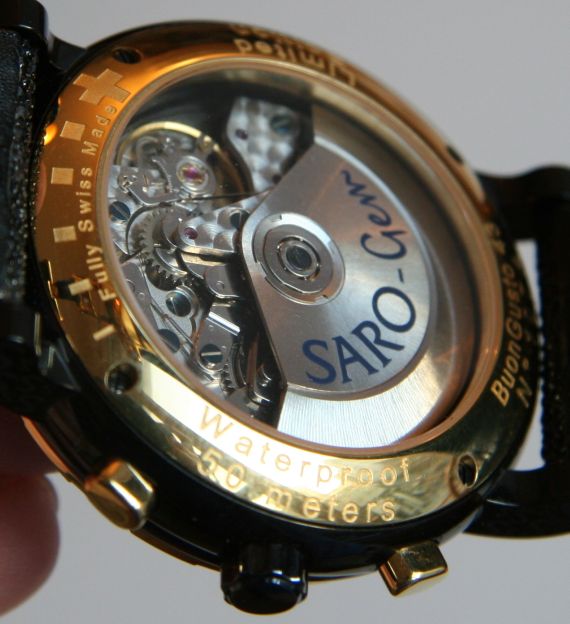 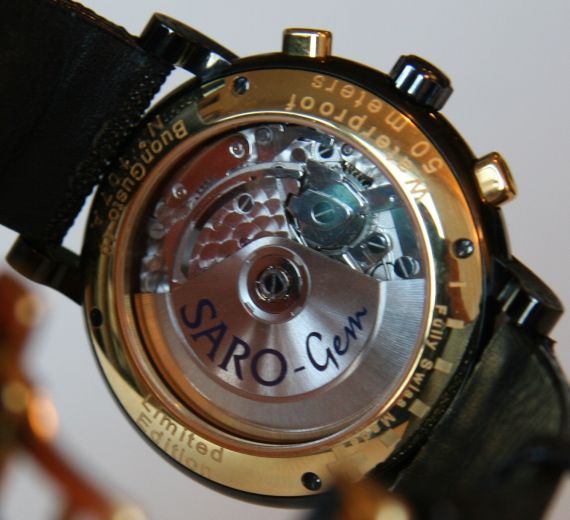 The gold PVD coating carries through to the quality push button, fold over butterfly clasp. If the strap material doesn’t look familiar to you, that is because it is galuchat, or stingray. The skin is used for watch straps commonly because of its interesting texture and natural, gentle surface shine. Galuchat is mostly used on women’s watches, and rarely on men’s watch. This is one of those instances, and I was hesitant at first, but really like it now. I don’t have a lot of watches that I would consider glitzy, and maybe the SARO-Gem BuonGusto watch has changed my perception on the more showy style. The many contrasting colors, finishes, and interesting gleaming surfaces (in addition to diamonds on the dial) make for a watch that asks to be seen. And a nice watch is meant to be seen. What makes the SARO-Gem BuonGusto watch a bit different, is that the watch part of it is straight forward and functional, while the rest of it is nicely decorated. Which is a contrast to those watch where the manner of telling the time is the showy part.

So lets go to the dial. You have a chronograph layout with subdials framed in lightly polished steel windows the hands are organically curved and the proper length for the face. The hands are also in gold PVD and are further coated in the center with a luminant called Luminox. The same luminant carries over to the smaller hands on the subdials and the tip of the arrow on the chronograph seconds hand. The easy to read dial is so welcome compared to the complex look of so many other decorated watches that are hard to read. The crystal is sapphire and gently domed.

Of the most distinguishing features of the dial aside from the dark red, gold speckled face, are the 8 diamond hour markers. The diamonds are each .2 carats each and complete the look of luxury. While you can’t tell just by looking at the SARO-Gem dial, the watch designer Rolf von Burg’s signature is applied on the rear of one of the hands. 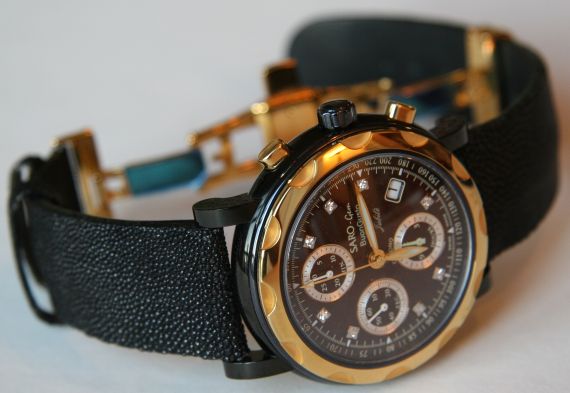 Inside the watch is a high grade, fully decorated Swiss ETA Valjoux 7750 movement. I’ve never seen a 7750 so nicely decorated. You’ll notice the many blued screws, perlage polish, and nicely signed automatic rotor. The large window on the caseback makes the movement look grand. It is a nice look. The movement also has an Incabloc shock absorber system and because it is so high grade, it has a 48 hour power reserve (more than lower grade 7750 movements). The movement operation is smooth as expected from the popular ETA 7750 movement. A small issue exists with the design of the crown. It looks nice, and is well made for adjusting the time, but is a bit hard to use when manually winding the movement. However, as the watch is an automatic, you probably won’t be hand winding it too often. A small issue again, but worth mentioning.

At 50 meters of water resistance the BuonGusto 43 Jubile is sporty, but not meant for serious outside duty. That is fine however, as you’ll want to take care of, but not necessarily baby a watch like this. It is meant to be enjoyed on a regular basis and worn. Like I said, it is a classy, formal watch that doesn’t have any functional sacrifices, and frankly that is not easy to find. SARO-Gem surprises me with their interesting designs, attention to detail, and watches that feel like they are made to be enjoyed as watches, not just wrist accessories that happen to tell the time. While harder to find, SARO-Gem watches are officially sold in the US. A watch like this would retail in a store for about $6,500. While the BuonGusto 43 Jubile may not appeal to everyone’s taste at first glance, you’ll find it hard not to like once you’ve checked one out – which is the best type of persuasion you can hope to receive from any timepiece.