Scuderia Ferrari One Watch By Cabestan 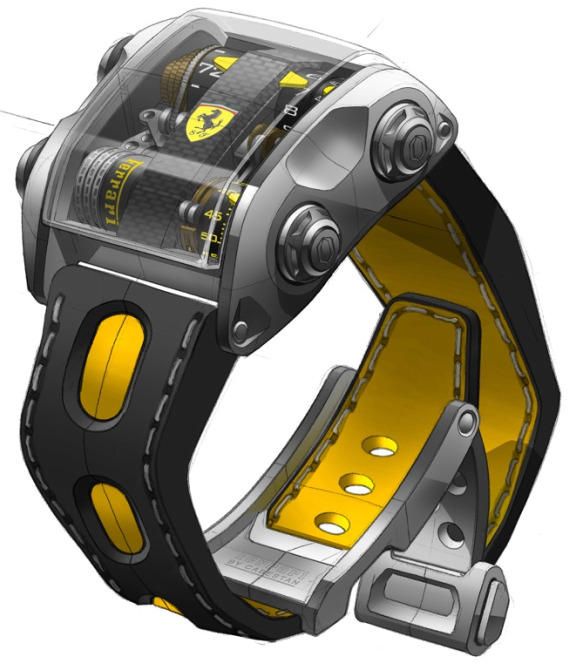 The big news this week in the watch world was the big deal between Ferrari and high-end watch maker Cabestan along with its designer Jean-Francois Ruchonnet. Cabestan is to make a limited edition collection of very high-end Ferrari branded watches. I briefly discussed the Ferrari / Cabestan watch deal here on Luxist. This comes just a few months after Ferrari officially broke ties with Panerai, who was previously given a license to make Ferrari branded watches. I discussed the termination of the Panerai/Ferrari relationship here. Panerai was making watches priced comparable to other Panerai watches in the $10,000 range (give or take several thousand) for most of the Ferrari watches. The Panerai name wasn’t even on the dial. The watches were a market failure – bigger than you’d think when it came to the popular Ferrari name. Now, after the ink is about dry on all the termination documents with Panerai, Ferrari has chosen a new partner with Swiss brand Cabestan. Seen here is an image of current Cabestan CEO Timothy Bovard adorning a Ferrari Jacket – no doubt during a final meeting with Ferrari to “seal the deal.” All sources indicate that they are very happy with the project and have evidenced that Ferrari’s approach to making cars is very similar to the predominant sentiment among the best luxury watch makers. It is also a major step forward for independent luxury brands. Panerai was part of the very large Richemont Group while Cabestan is a boutique brand.

Unlike the Panerai deal that saw the production of many pieces in the mid-range luxury price market – the Cabestan deal is totally different. Ruchonnet designed the Scuderia Ferrari One watch that will be part of a limited edition of just 60 pieces – with about 20 pieces being made each year. That will be 30 pieces in black and red, and 30 pieces in black and yellow. Interestingly enough, the watch will not be sold through traditional retail outlets, but only through Ferrari. While the details aren’t 100% clear yet, it seems as though you have to be an existing Ferrari car owner to be a Scuderia Ferrari One by Cabestan watch owner. Plus, you’ll likely need to go through Ferrari in order to purchase the watches. Either way, expect long waiting times. 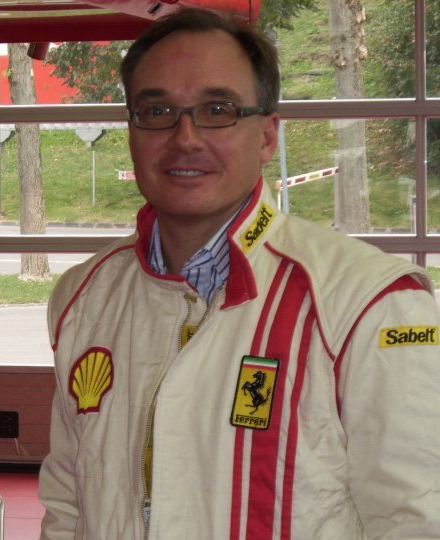 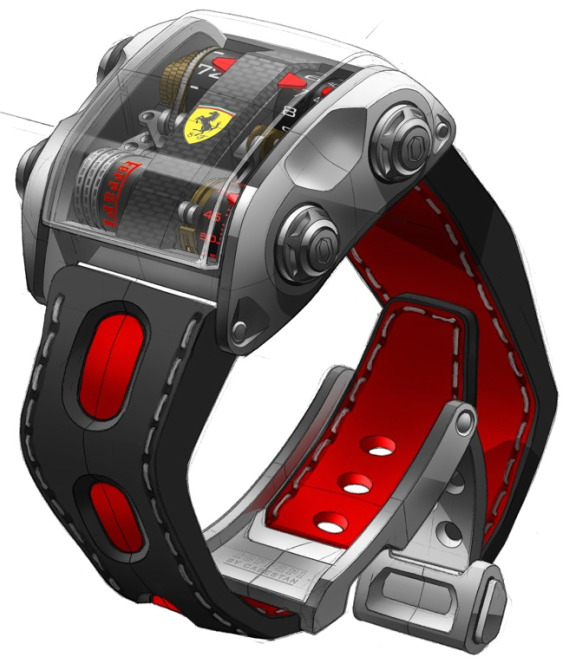 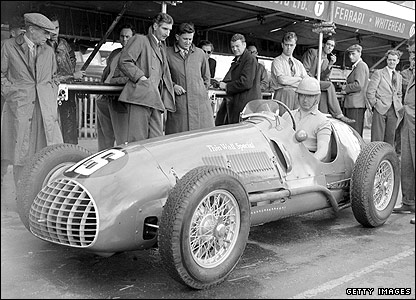 The timepiece, as designed by Ruchonnet and built by Cabestan is interesting. Ruchonnet is one of today’s most prolific watch designers – having accolades with many brands. Thus, while he is the Cabestan designer, hes talents are spread widely to many brands. Cabestan made a name for itself with a crazy cool watch called the Winch Tourbillon Vertical. The watch was originally designed by Ruchonnet and master watch maker Vianney Halter. An image of the original Cabestan can be see among the images in this article. The current Winch Tourbillon Vertical is a bit different but retains the same concept. The movement is surprisingly accurate for a mechanical calibre being accurate to within about 1 second a date. It features exotic complications such a fusee and chain transmission of power from the mainspring barrel to the movement, as well as a vertically oriented tourbillon escapement wheel. Functions include the time (with hours, minutes, and seconds) as well as a power reserve indicator. A small winch is used to wind the movement manually. Even if the design isn’t for you, you can’t help but appreciate the incredible level of finishing and decoration the watch has if you get to check one out.

Ruchonnet adapted the design of the Winch Tourbillon Vertical watch for a more Ferrari- like application. The movement has been cosmetically enhanced with a number of changes – though the core complications and functions are retained. It was important for Ruchonnet to have a lot of Ferrari DNA in the movement. The idea was to use some of the same high-tech materials uses in Ferrari Formula 1 cars. In fact, the watch is also a 60th anniversary piece of the first Ferrari F1 car (Ferrari 275 was the model I believe) from 1950. Images of that car can be seen here in the article. You can see a healthy amount of carbon fiber (which is widely used in Ferrari cars) in the middle of the movement as a bridge. Unlike the original Cabestan watch, the Scuderia Ferrari One has a single, streamlined sapphire crystal over the watch dial/movement. Time is told via the “drums” that turn and are made of out aluminum. Separate ones are used for the hours, minutes, and seconds. Colors in the movement materials represent similar tones to Ferrari cars and their engines. Like all Cabestan watches, seeing the movement and using it to tell the time are the absolute highlights of their watches. 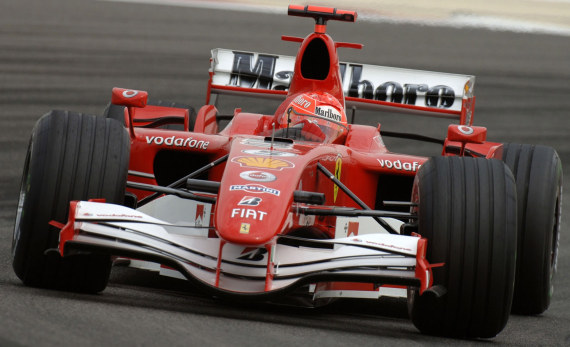 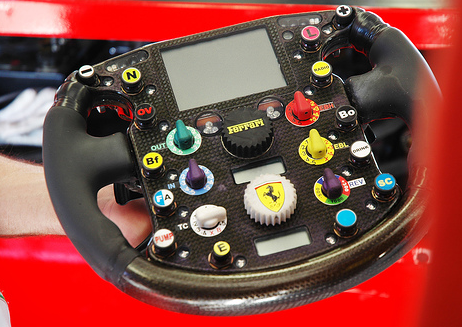 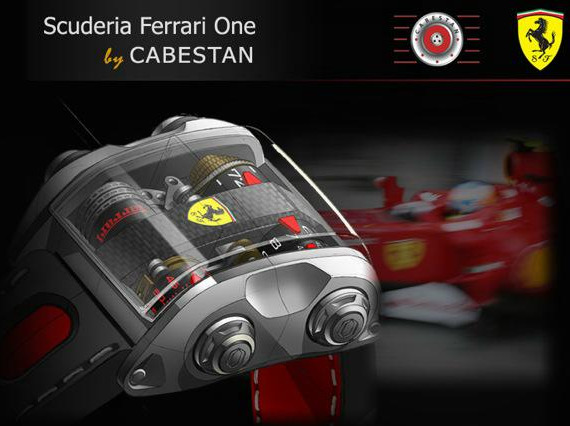 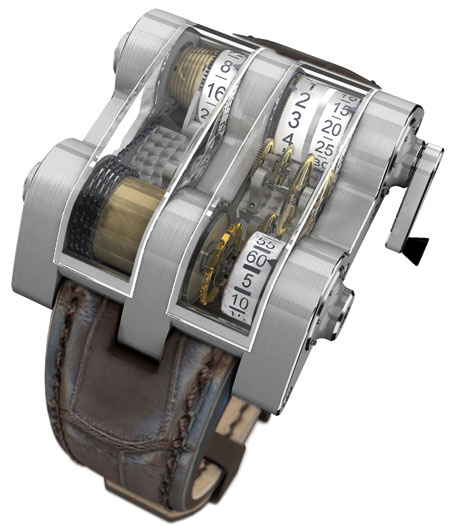 Ruchonnet didn’t design the watch without help from Ferrari of course. He worked with Ferrari design director Flavio Manzoni (and likely the team) out in Maranello to identify those parts of Formula 1 Ferrari cars should be included in the design. The watch case has been specially designed to evoke elements of Ferrari race cars. The piece isn’t meant to look like a car, but simply thematically go with them. The sides of the watch case are done in a special magnesium alloy, and the “screws” on the sides of the case have been designed to look like F1, quick change wheel nuts. I’d have to be in a room with both the cars and the watch to come to a conclusion on that for myself. Though if the picky people at Ferrari are OK with it, the watch is probably in good company when in the same room with the super, super car. I also added an image of a Ferrari F1 car steering wheel that you can visually compare with the watch. See how there is some similarity there? Ruchonnet even borrowed fonts from car gauges for the numerals on the rotating drums in the movement. One little question for me is how the watch will be wound. The original Cabestan watch included a winch on the side of the piece for winding it. Then that piece was removed as a module that you stick on the watch when you want to wind it – but that was expensive and caused problems. The newer Cabestan Nostromo watch actually has a pop out crown (top right “screw” pushes in to pop out). Seems as though that solution might be best for the Scuderia Ferrari One watch as well.

The watch will be attached to a cool special leather strap – also in either black and yellow or black and red. The strap deployment clasp is pretty cool looking as well. I can’t wait to see final versions of the watch – which are due out in a few months from now. I will of course keen look out for them. Again, there will only be 60 of these watches ever made over the next year years (hand-made, one at a time), and they will cost 300,000 euros a piece, on top of what you already spent on your Ferrari automobile.